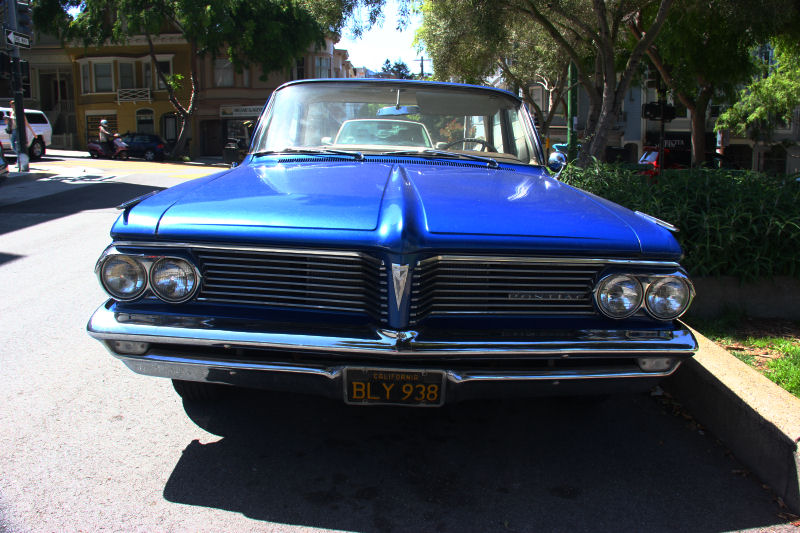 I keep coming back to Bernal Heights when I'm in San Francisco. It's an eclectic neighborhood and I seem to have good luck finding interesting cars there. The vicinity of the park where I found this 1962 Pontiac Catalina is also where I found the '51 International pickup, '62 T-Bird, '79 Ford LTD coupe and '74 Volvo 164E. There's a 1954 Buick around the corner that I've been trying to photograph for the past couple of years, but every time I stop by, it's underneath a car cover. Alas. I had to settle for this metallic blue Pontiac instead. It's good that I did, because I have not seen it since. 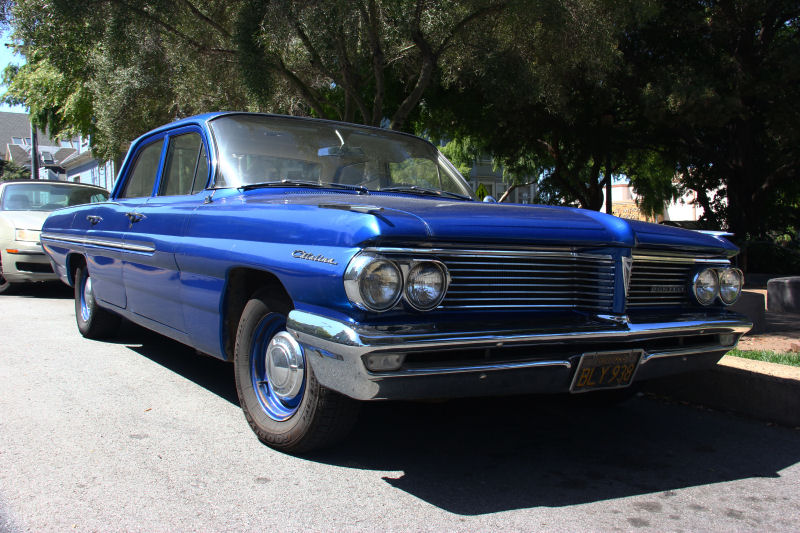 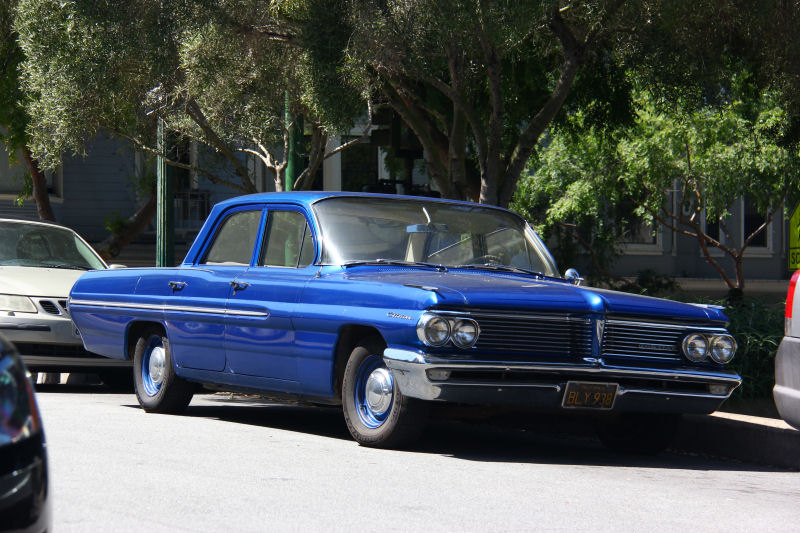 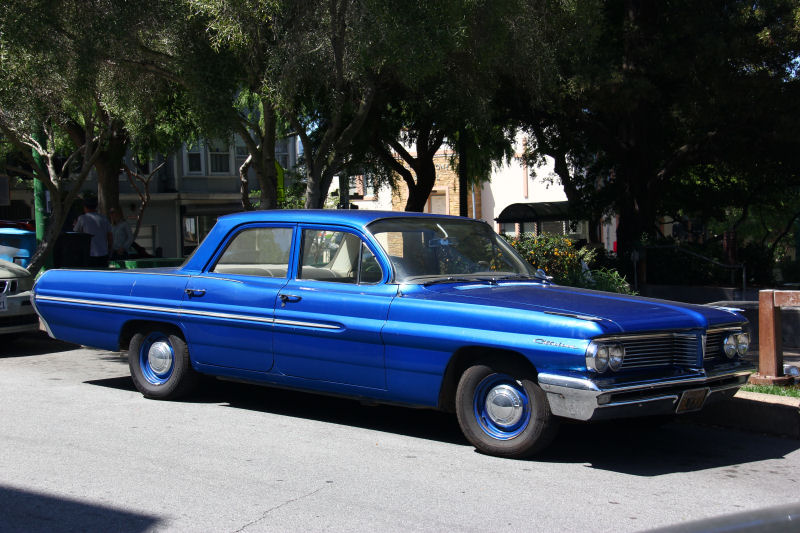 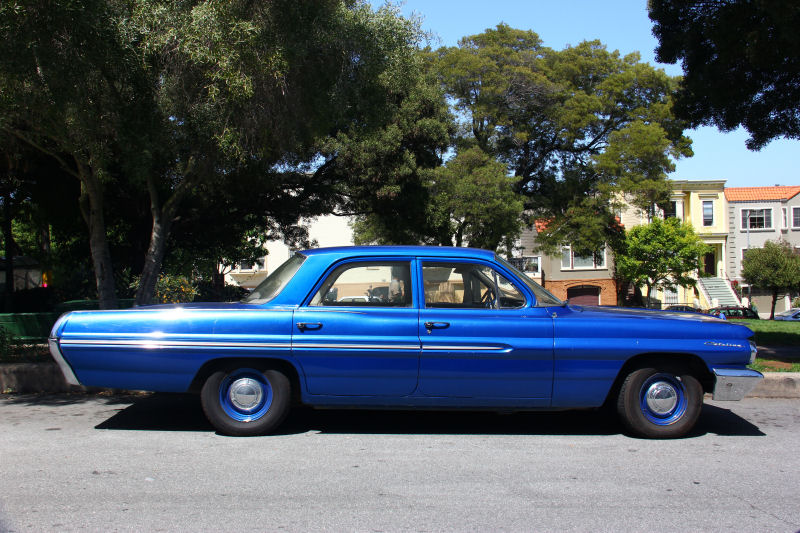 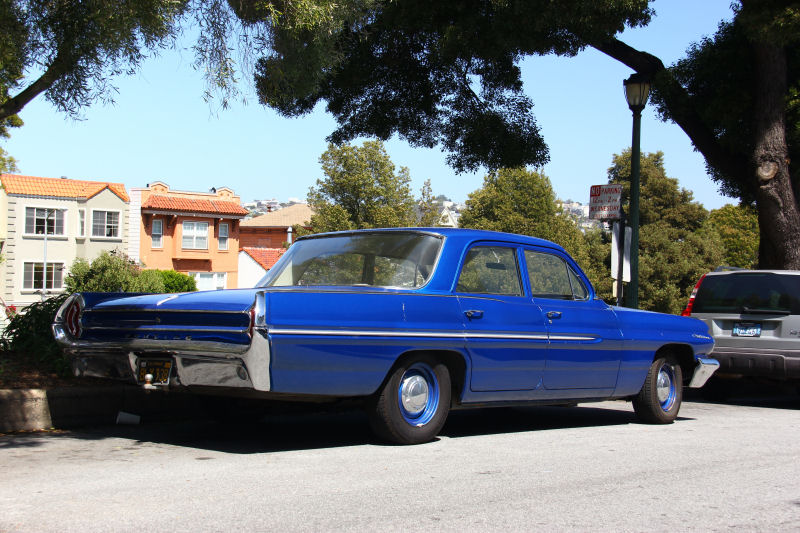 The '62 Pontiacs were a transitional year for GM. These cars were starting to reflect a more modern approach to design for the new decade, and the wraparound windshield so popular in the 1950s was falling out of favor. This was the final appearance of a curved A-pillar and the last full-size Pontiac without vertically stacked headlamps until the 1967 Grand Prix. As with many cars of the era, the Catalina sedan was offered as a pillared sedan or Vista four-door hardtop - the latter a stylish and airy option while the former was cheaper. This one is a pretty basically equipped car, with dog dish hubcaps and few other options. It does, however, appear to have the pearl plastic Custom steering wheel with chrome horn ring from the Decor Group (though it lacks the chrome window trim), and the Safety Group if the padded dash is any indication. A 389 cubic-inch "Trophy" V8 came standard in these big, heavy cars, available in different forms ranging from a 2-barrel Economy version to a 348-horsepower high-compression engine with Tri-Power (three sequentially linked 2-bbl carbs) setup. A 421 Super Duty V8 was technically available but not advertised and usually only specified by hardcore racers. 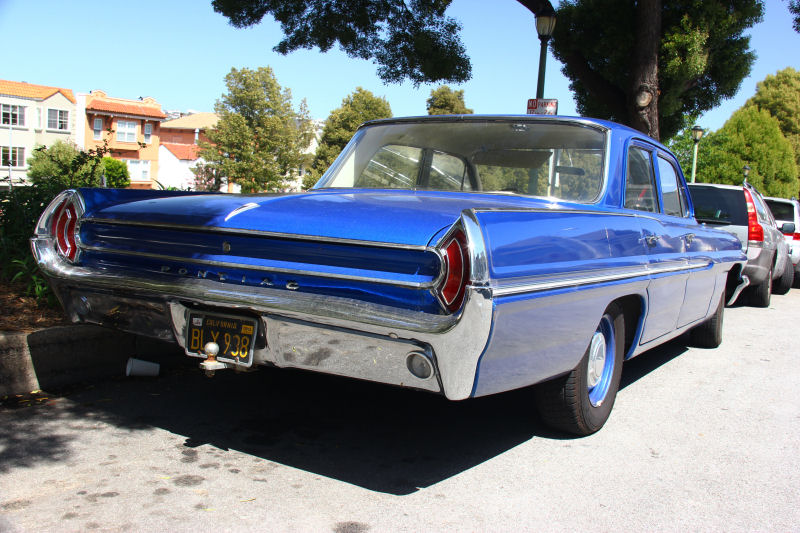 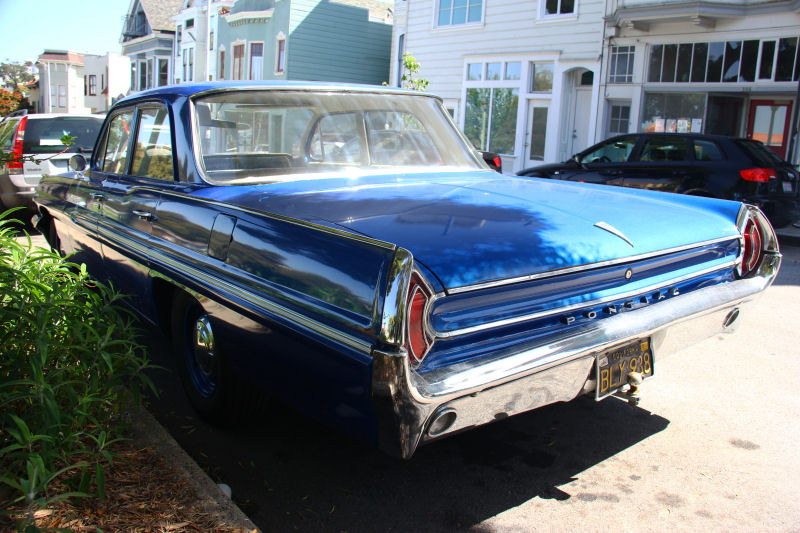 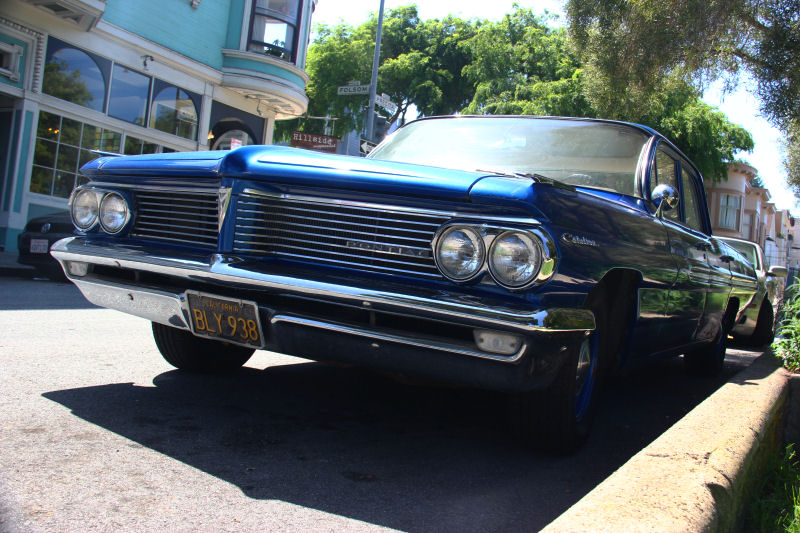 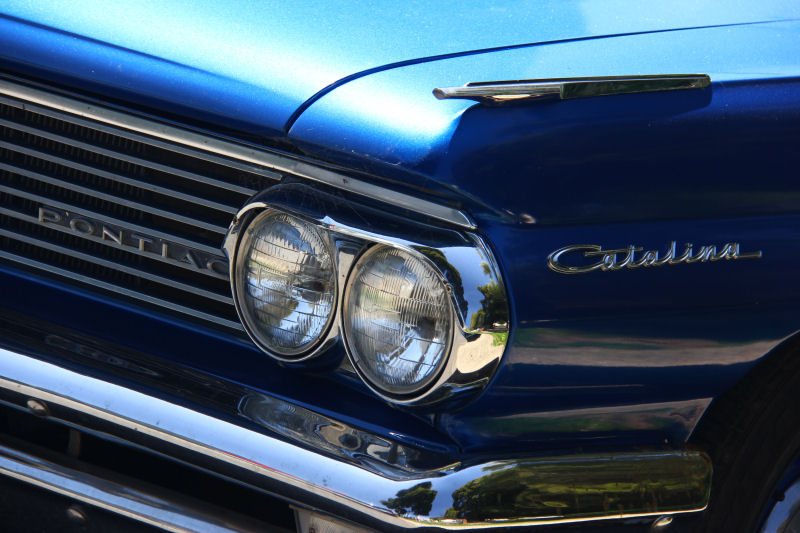 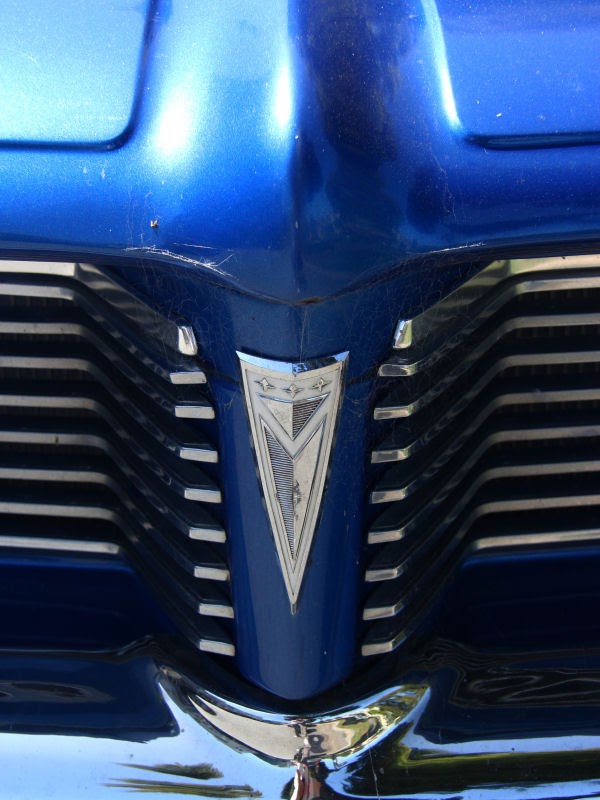 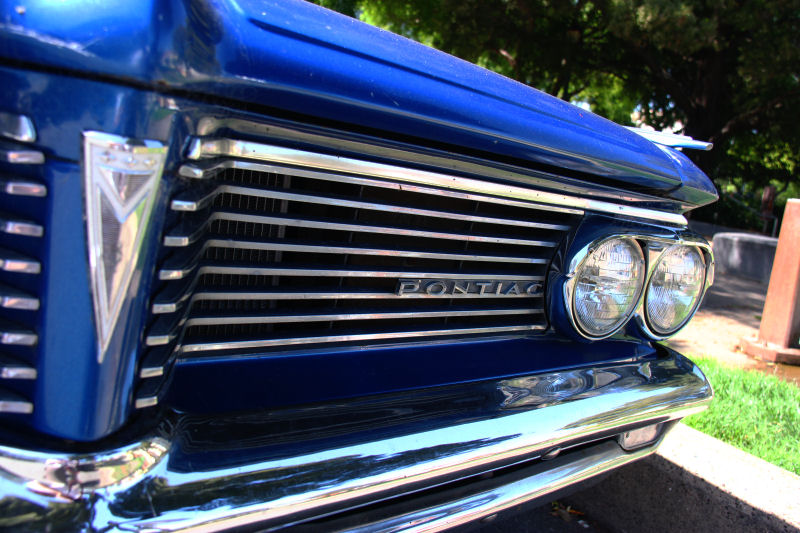 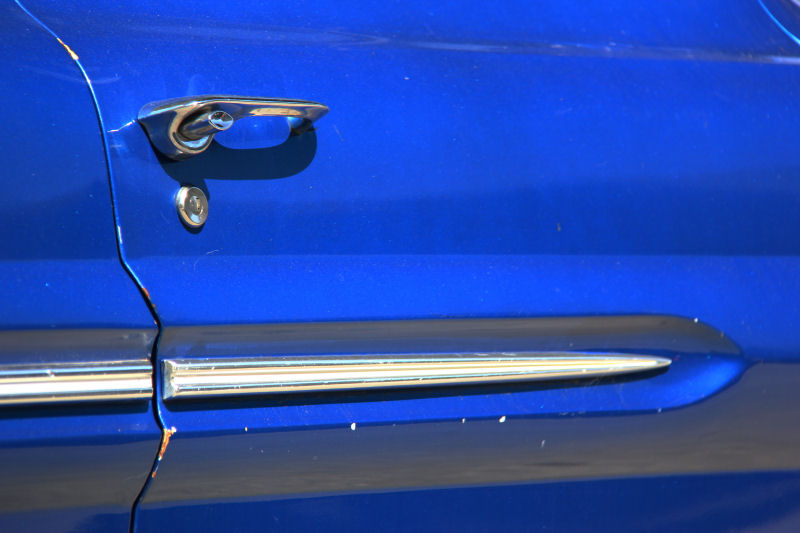 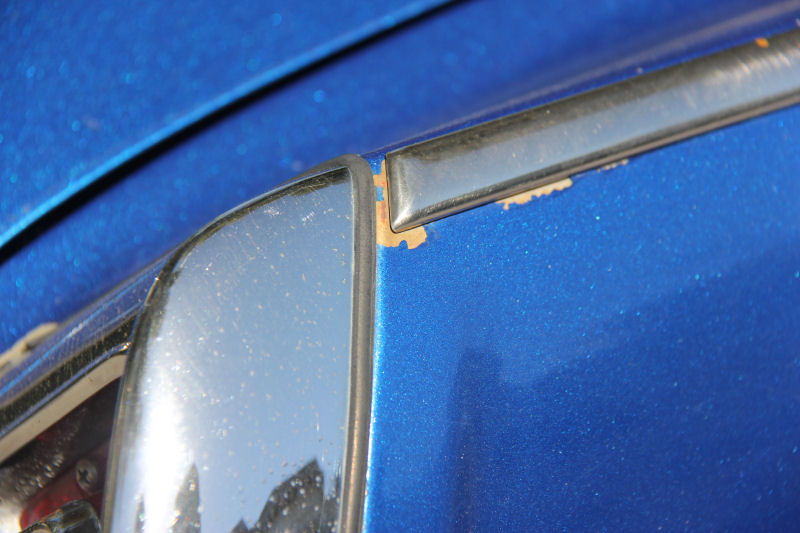 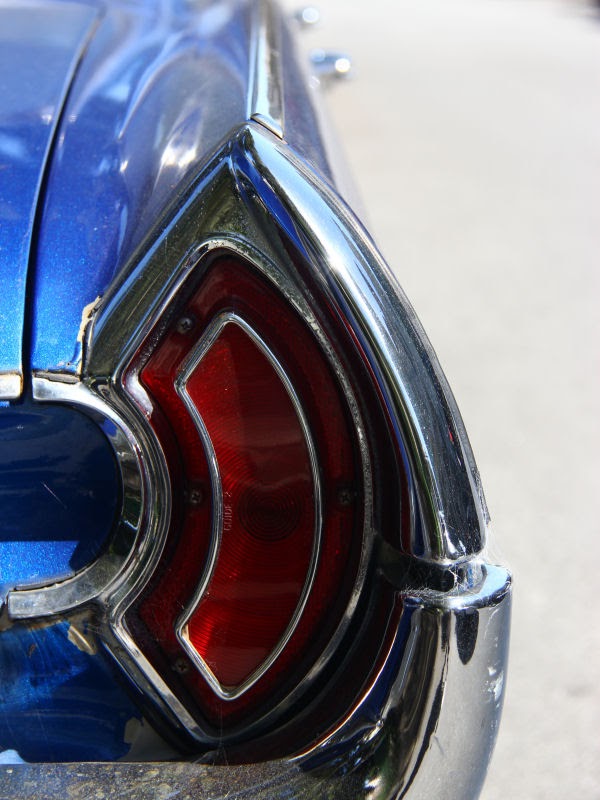 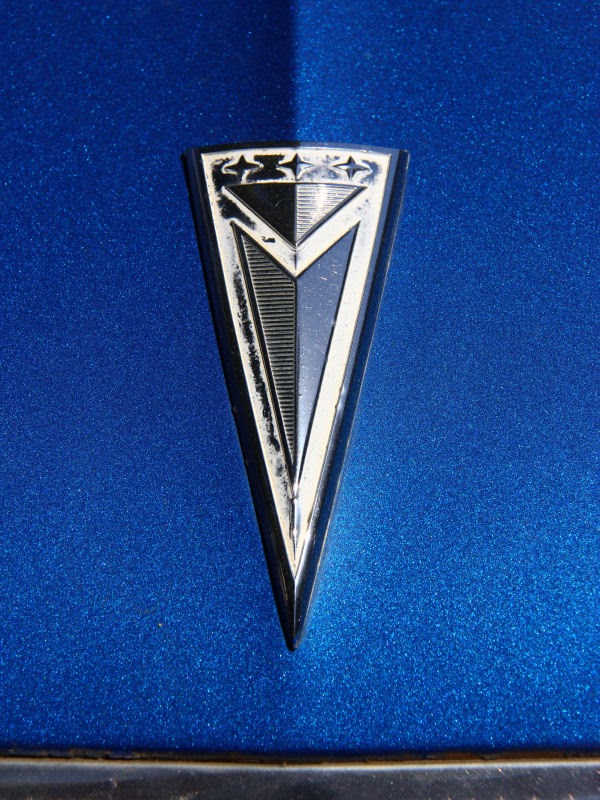 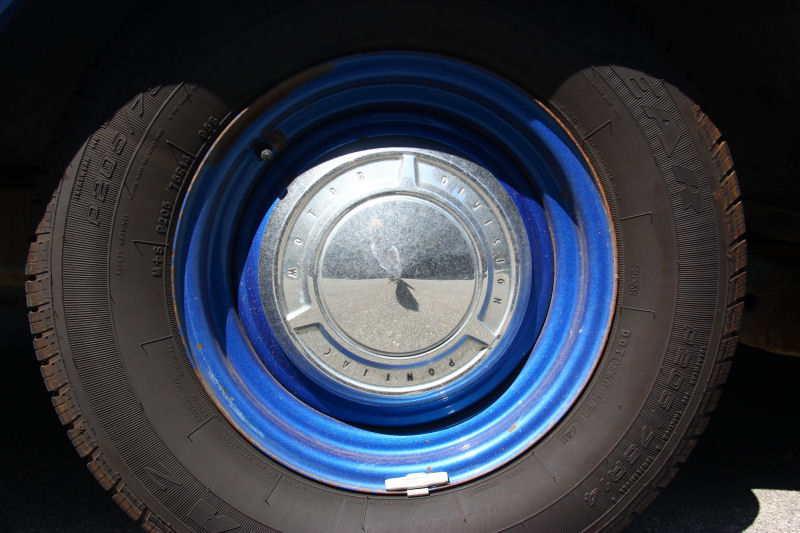 This Catalina is one of 68,124 pillared sedans built that year. It likely sports one of the tamer engine setups, with a relaxed Hydra-Matic transmission. The metallic blue paint is not original and a shade of coppery tan is visible underneath. Neither appear to be factory Pontiac colors for 1962, though the closest match might be Caravan Gold metallic. It strikes me as an older fleet or family car, with early 1963 California black plates that make it either perhaps a late-model '62 first sold in '63, or a car that was traded in very quickly. The paint is almost due for another respray but the body appears solid and well cared-for. It's an awfully big car for San Francisco's tiny parking spaces, where the long rear overhang and trademark "Wide-Track" chassis might be especially problematic in the steeply angled, narrow streets of areas like Bernal Heights. Car enthusiasts usually find a way to make their hobby work, even if it means paying more for garage space or parking in flatter areas and walking the rest of the way.
Posted by Jay Wollenweber at 12:00 AM