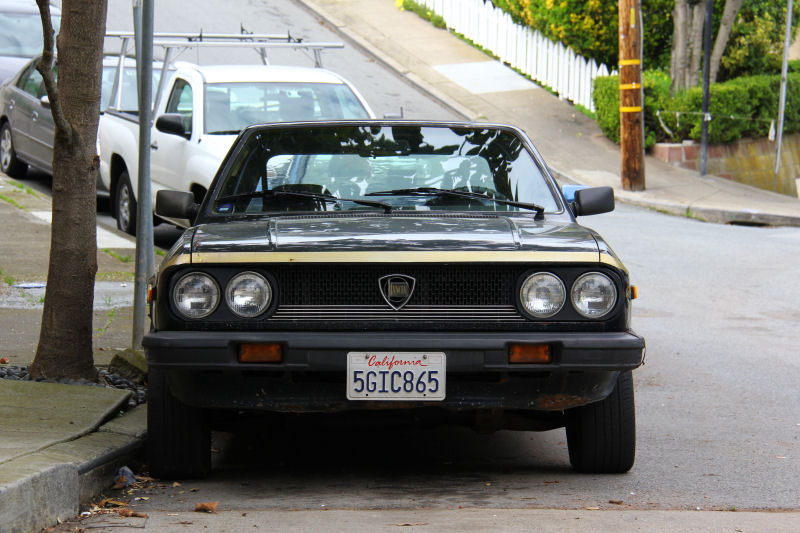 This was almost my Halloween post. Halloween for many people is all about getting scared, and what can be more scary than keeping a Lancia Beta running in America? Then I checked my local Craigslist and found three of them for sale in good condition. So they're still out there. Funny thing is, I've been trying unsuccessfully for two years to track down a blue Beta coupe in Bernal Heights, and found this one quite by coincidence in another neighborhood nearby. 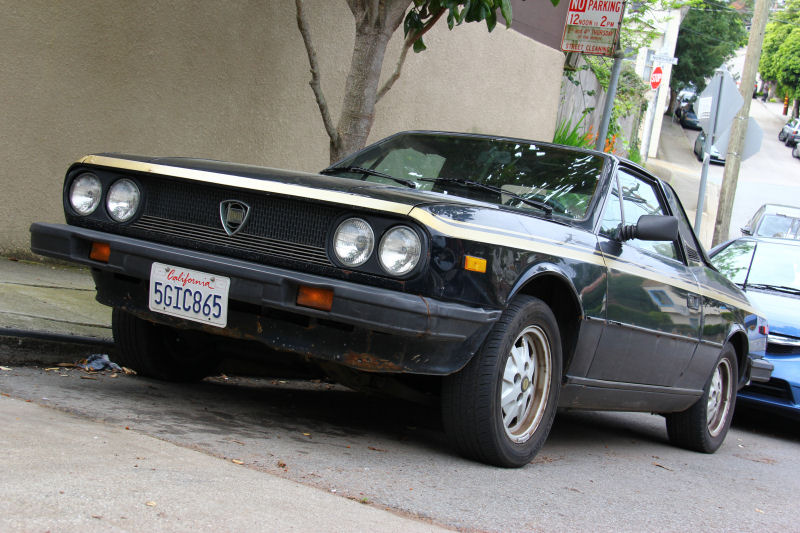 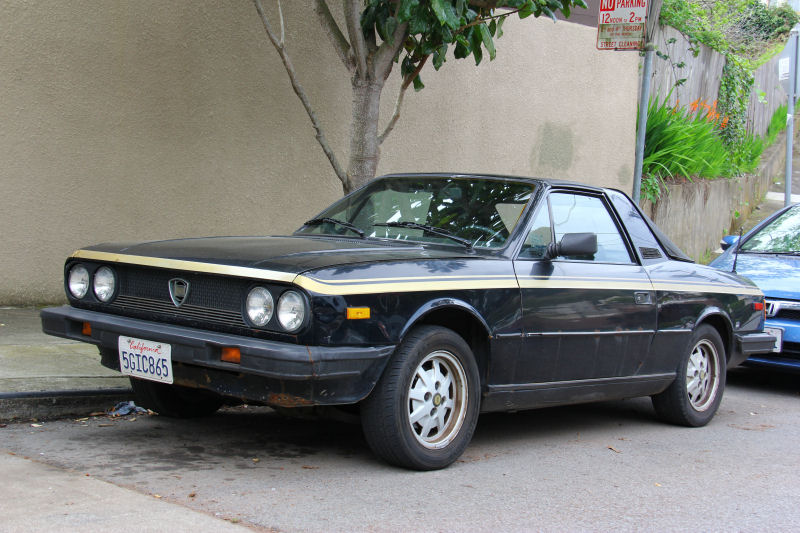 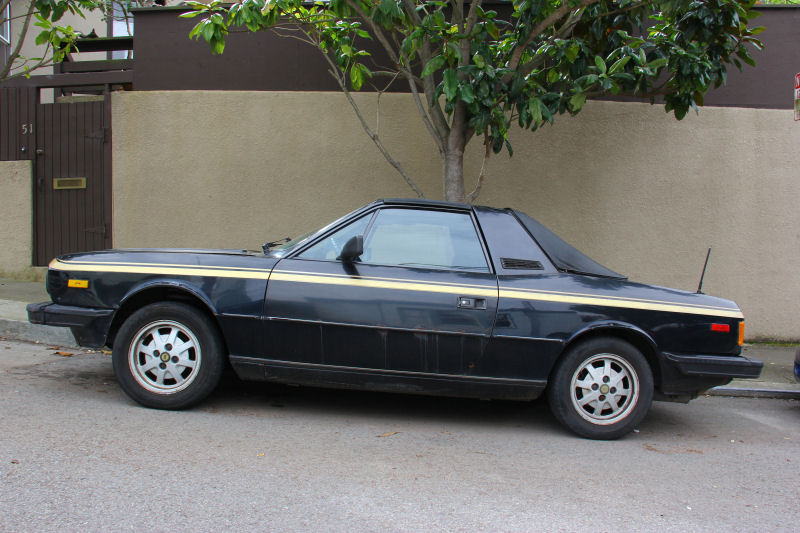 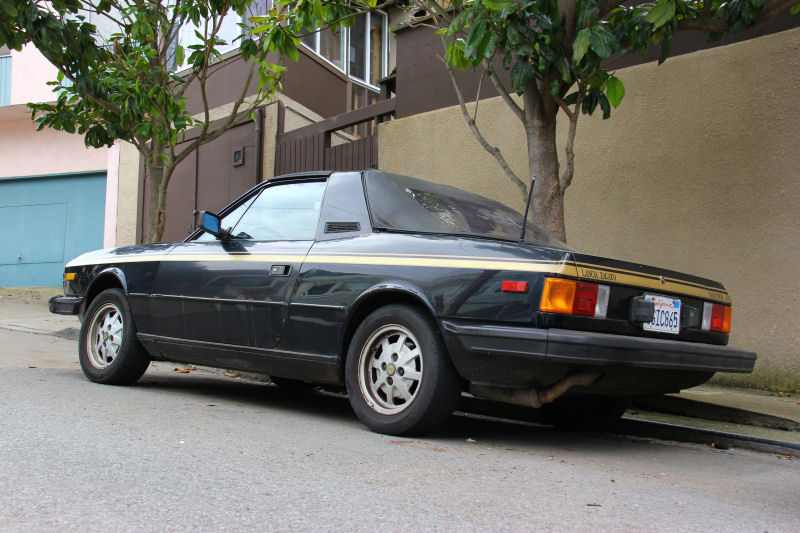 The Lancia Beta has, shall we say, a reputation. A bad one. Lancia itself had a good reputation for quality when Fiat took over the company in 1969, but it was not profitable and long-term product planning was just not there. Fiat rushed to get something new developed, and what resulted was the 1972 Beta. In the modern era, this would be a bad omen, given that a "beta" build of a project is an unfinished release known to have flaws. Fiat wanted the Lancia Beta to be seen as a new beginning for the brand. The new car had four-wheel disc brakes and independent suspension, front-wheel-drive, good weight balance and proven DOHC Fiat engines. The coupes even looked halfway decent. The cars drove well, reviewed well, sold well. But they rusted! This is the car that ruined Lancia's reputation pretty much forever in the UK thanks to premature metal corrosion. 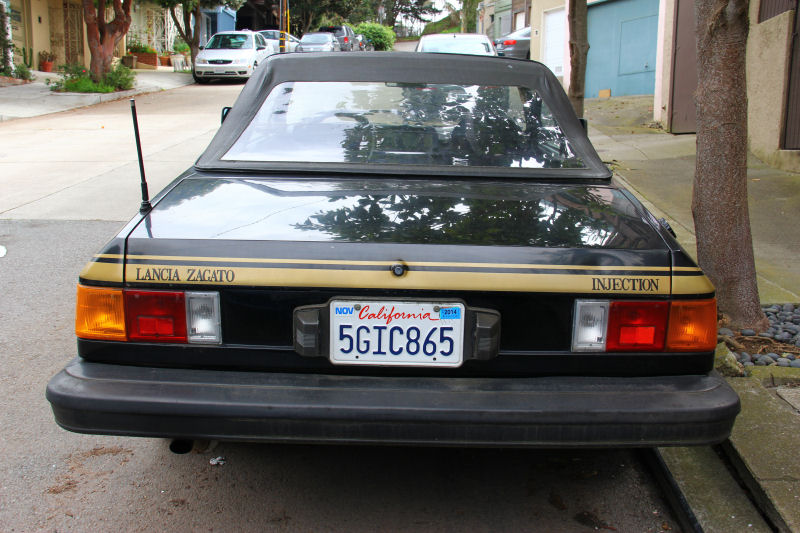 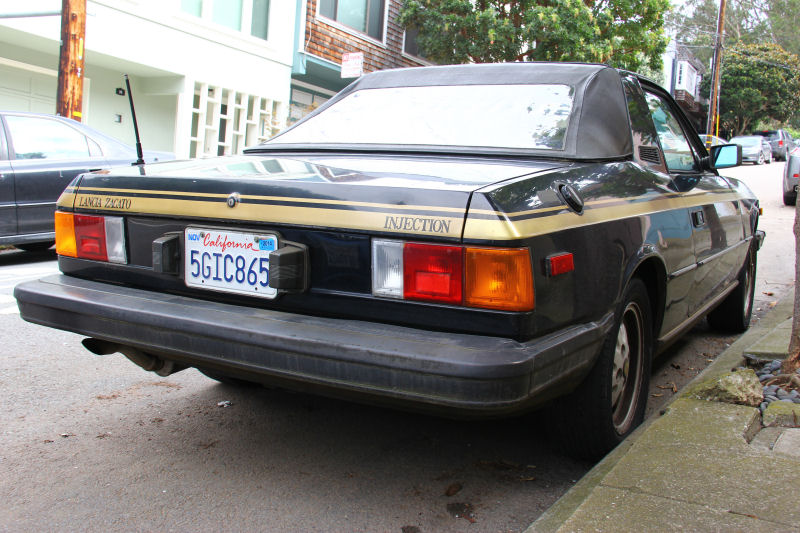 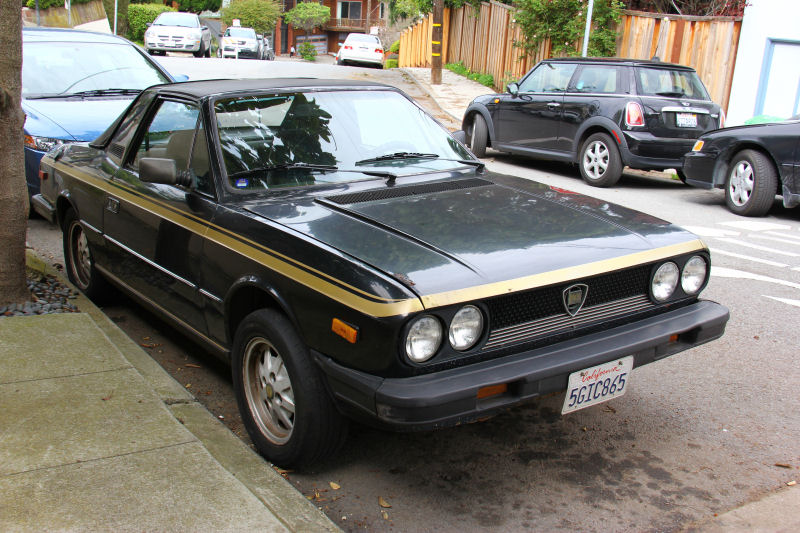 This one is a Lancia Zagato, sold as a Beta Spyder everywhere but in the US. The Zagato doesn't look like a Zagato design, because it isn't. Pininfarina designed it and Zagato built it. The Lancia Zagato is a sort of pseudo-convertible in the grain of the Toyota Celica Sunchaser, a targa-topped coupe with a soft, fold-down rear roof section. For the US market the car received a fuel-injected 1.6 or 1.8 liter four and a five-speed manual transmission. This one is kind of rusty but still runs, and it has some cool details. Admittedly it all goes a bit bland toward the rear end, but I like the styling for the most part, and the dashboard design is interesting. The most awesome thing about it is that the black and gold paint and stripe package indicates the Special Edition with the higher-performance 2.0 liter engine, leather interior, air conditioning and power windows. I can't be 100% certain it's the real thing, since the wheels are not the correct black with gold lip and the Lancia badge on the front grille is chrome instead of gold. I like the bilingual notice on the gas cap that tells French-Canadians to use unleaded fuel only, and to check the oil level at every fill-up. Do these cars really burn that much oil? 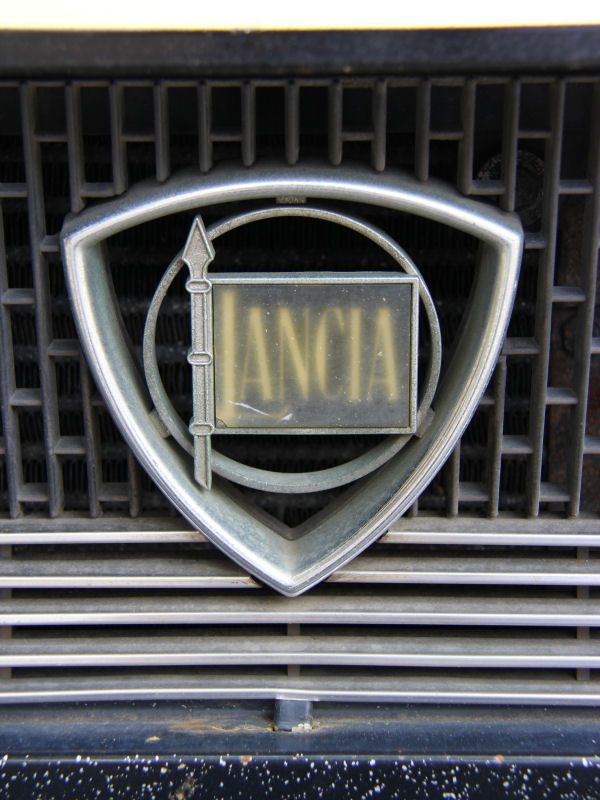 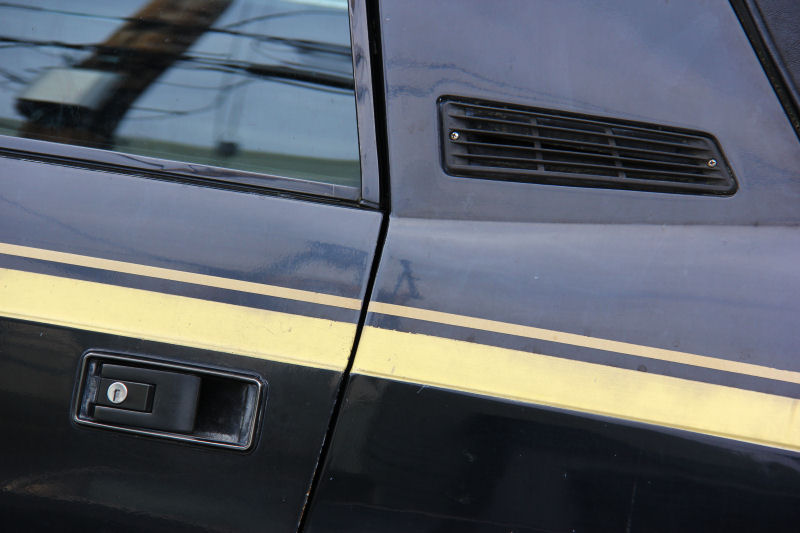 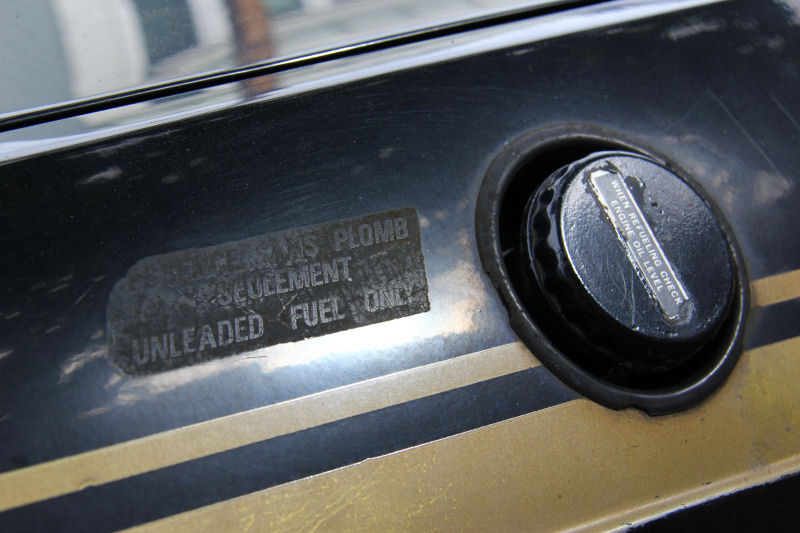 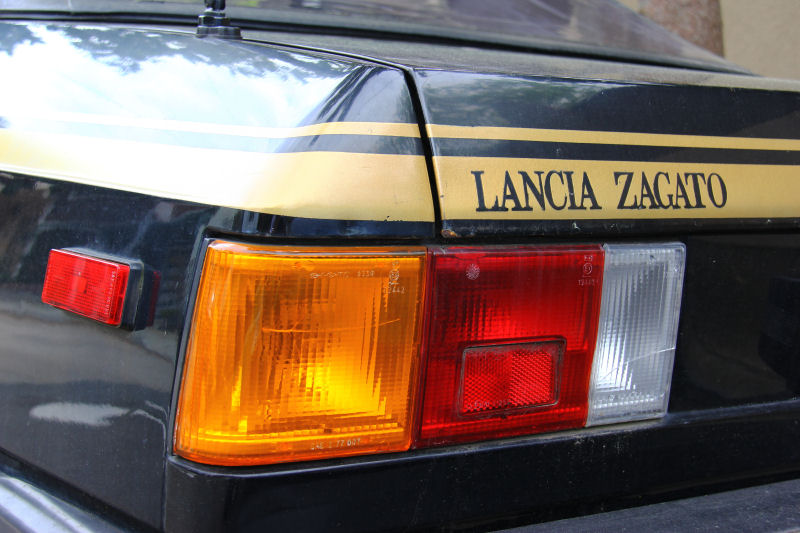 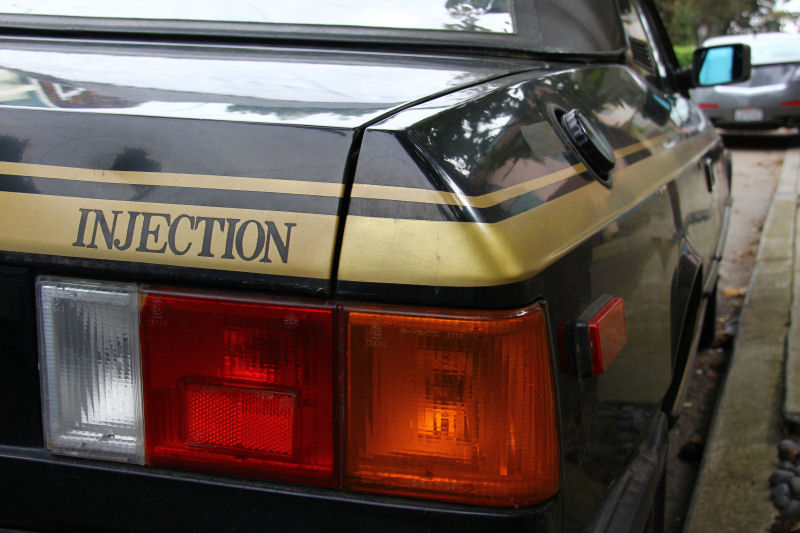 I told Jaan Hjorth at Eddins Moto in Berkeley about this car. He said Lancia Betas are just about "sale-proof" because nobody wants the headache of a car with severe rust-out risk and difficult parts availability. And this is coming from an Italian-car enthusiast who collects and repairs Lancias for a living! I knew these cars were rare, with only 9,390 Spyders/Zagatos built. But the '81-82 Zagato accounts for only 791 cars (worldwide!), and the Special Edition is the rarest of all with only 75 made worldwide. That's pretty cool. Even if it's not a real Special Edition, it's still exceedingly rare.
Posted by Jay Wollenweber at 12:00 AM