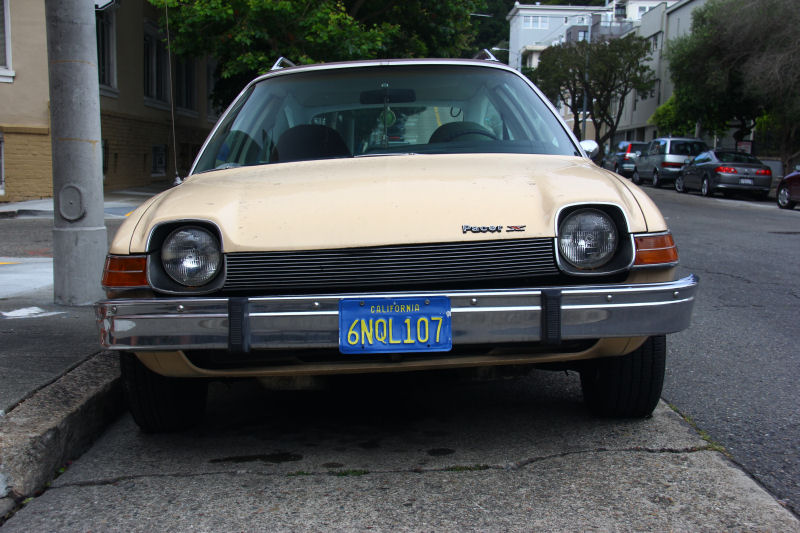 I adore early AMC Pacers. They're just so dorky, awkward and such a symbol of the 1970s that they've become sort of ironically cool. Between Wayne's World and Pixar's Cars 2, the Pacer is recognizable to all generations. It even made an appearance on Top Gear once, and Goofy drove a yellow one in Disney's A Goofy Movie. Unfortunately the Pacer is also remembered by many for being a "bad" car that failed at its intended purpose. 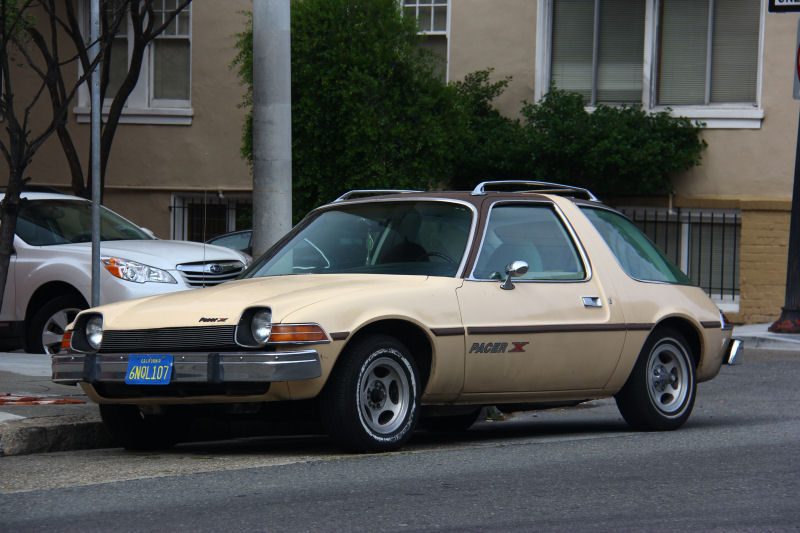 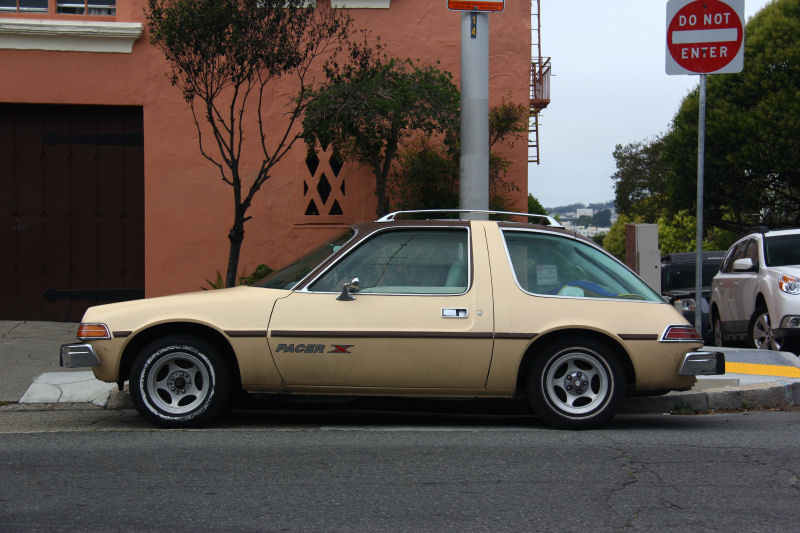 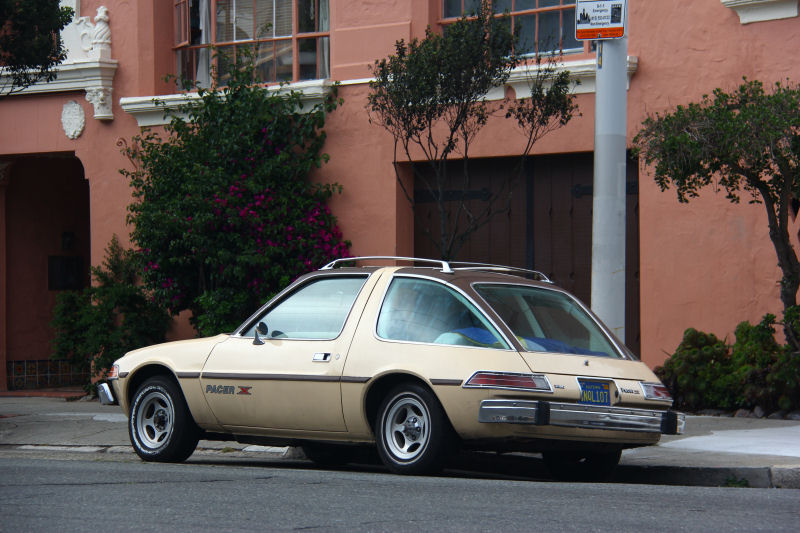 The AMC Pacer was supposed to revolutionize the compact car market. It was short in length, but wide for large interior space and good handling. It was originally designed to accept a Wankel rotary engine, and packaged to make passenger ingress and egress easy with a longer door on the right side. Anyone who has had to climb out of the back seat of a coupe should understand what a pain it is. The promised GM-built rotary never happened, forcing AMC to drop in one of their conventional heavy iron-block inline six engines. The large glass area that made visibility so good all the way around made the car very hot on sunny days, added a lot of weight and earned derision for looking like a fishbowl. Perhaps the best thing about the Pacer was that it was designed from the start to be a safe car. It ended up being a heavy, slow, ungainly car with relatively poor fuel economy. 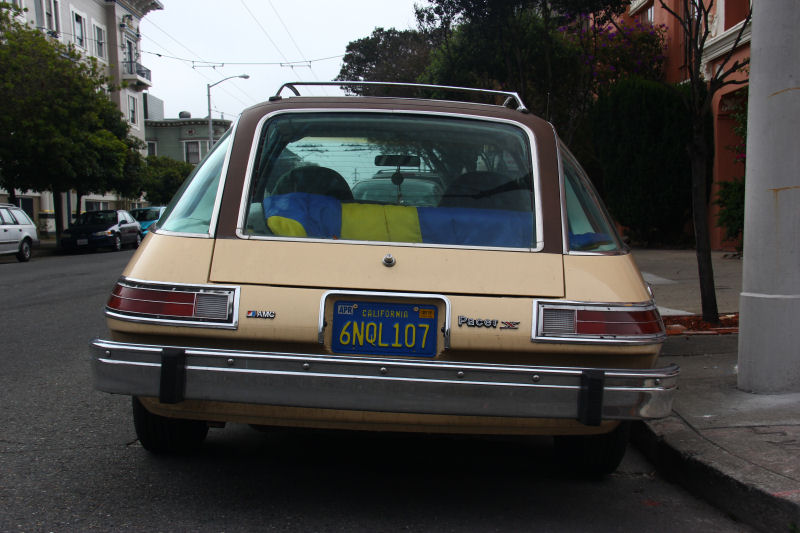 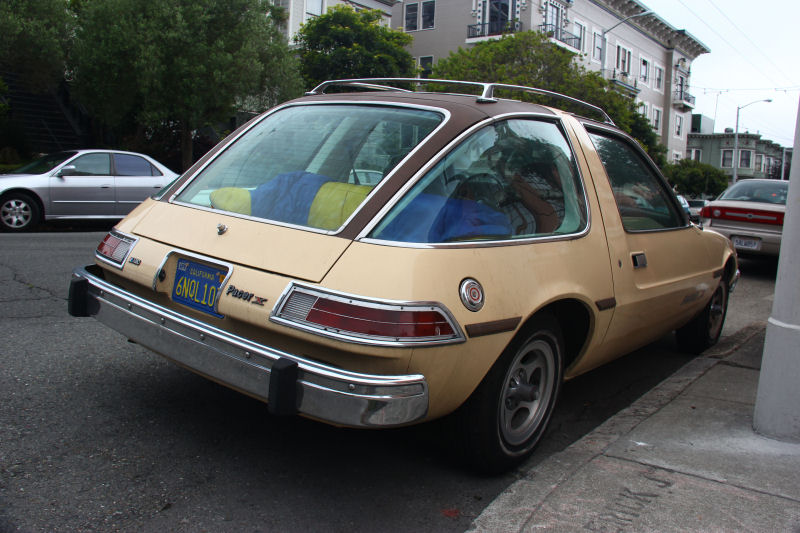 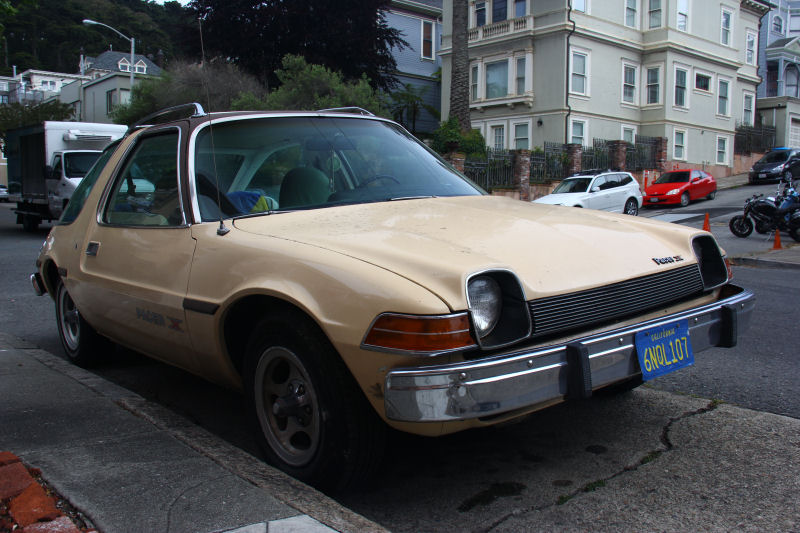 That said, I don't think that it was a bad car. It's really not that different in concept from, say, the modern Nissan Juke or Hyundai Veloster, both compacts that are known primarily for their controversial styling and packaging rather than performance. Both have performance variants (Juke Nismo and Veloster Turbo) but the base car is usually marketed for how it looks and how unique it is in the market. The Pacer was offered in an "X" trim level as seen here, a sports appearance package that gave the car vinyl bucket seats, sports steering wheel, floor shifter, alloy wheels, a front sway bar and Pacer X decals and badging. It didn't really do anything for performance, but I like the visual upgrades. This one looks very subtle in Sand Tan with Dark Cocoa roof and matching brown rub strips, and the white vinyl interior adds contrast. 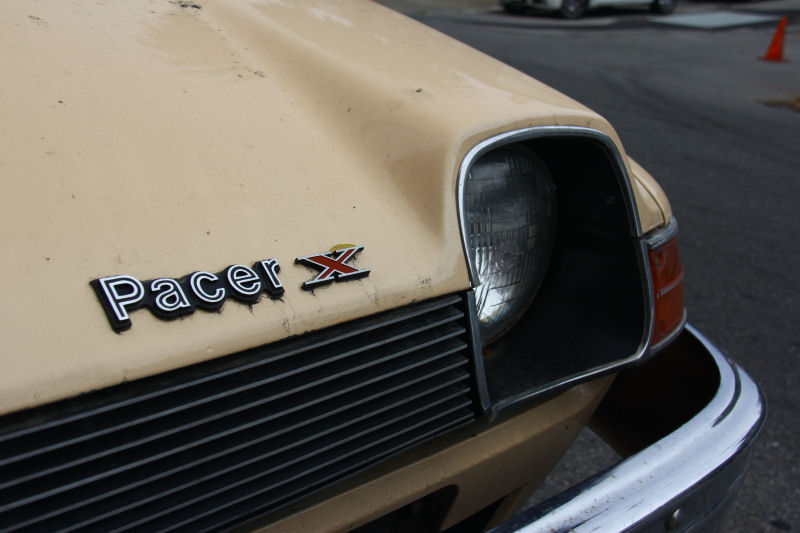 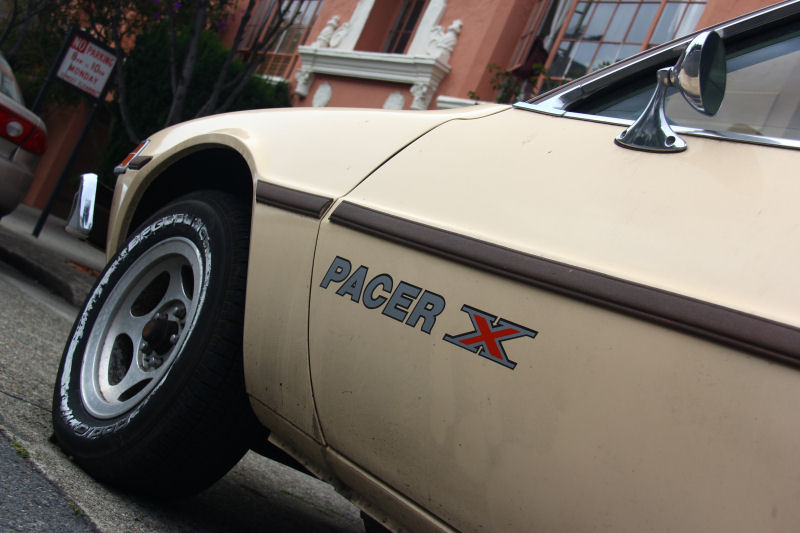 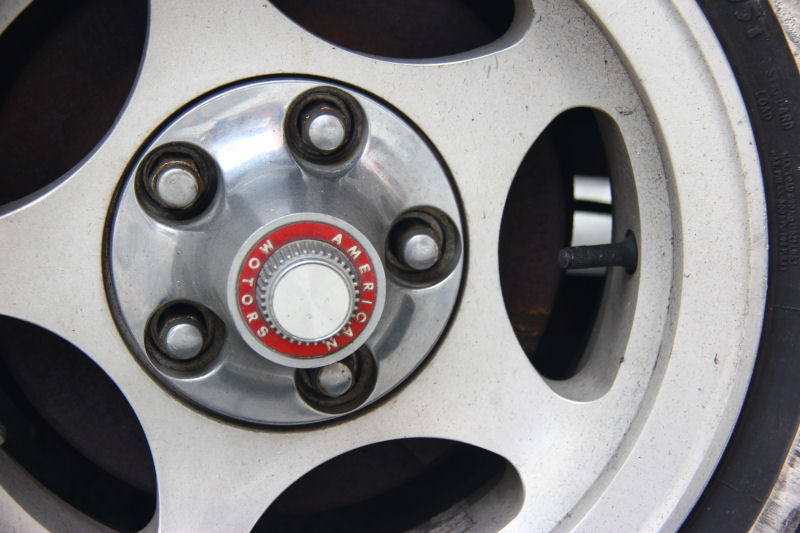 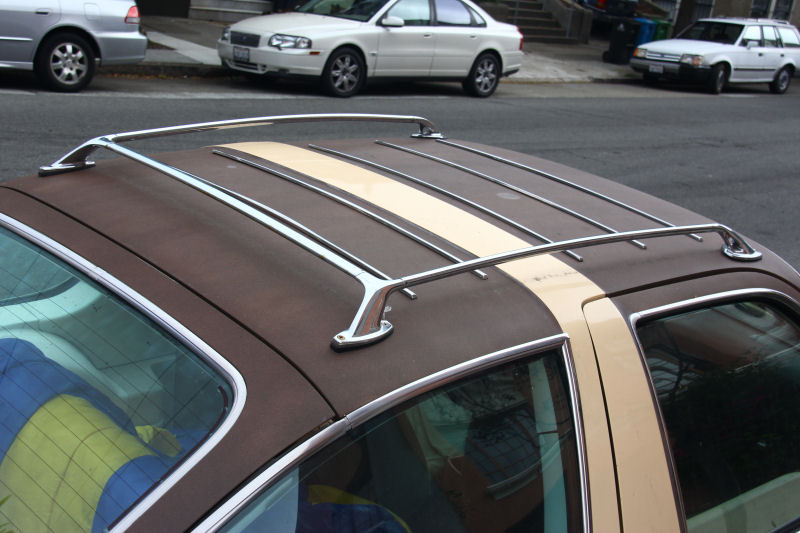 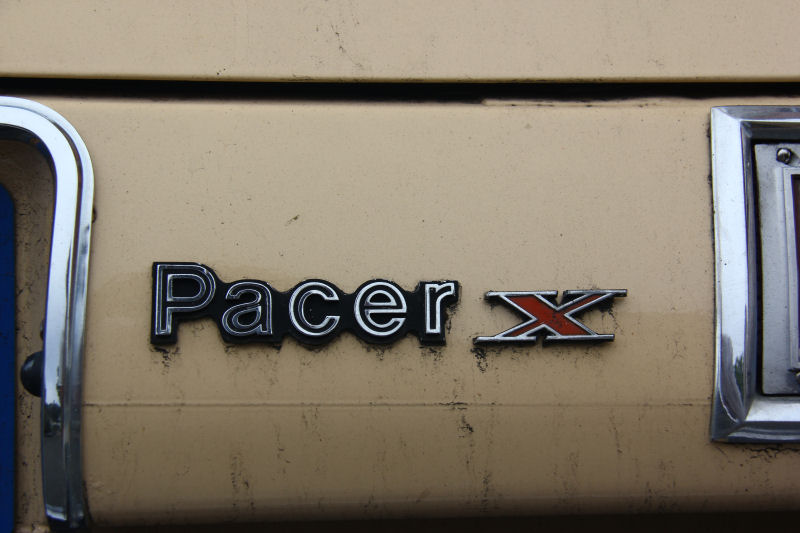 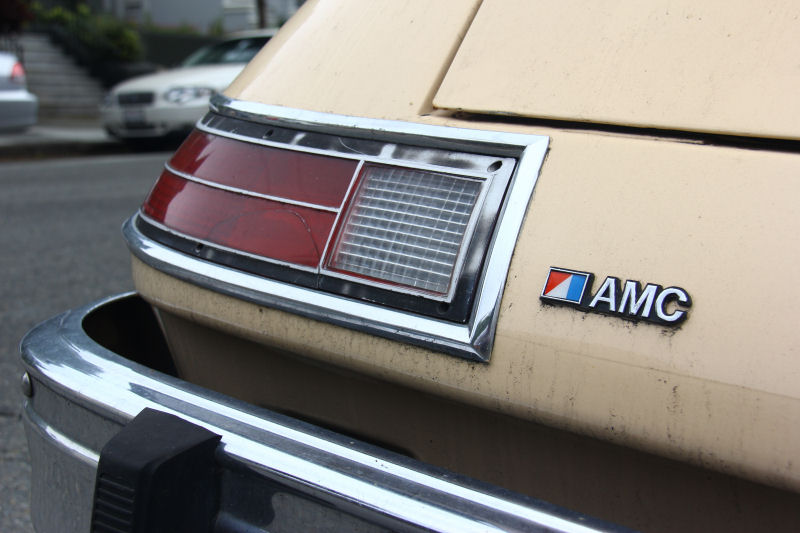 One of the interesting things about this particular car is the license plates. California recently introduced a program to offer "legacy" license plates, produced in the style of the original plate for the year a car was built, but apparently issued with a current registration number. This program supplements the current "Year of Manufacture" plate program already in place that lets old cars use old plates, as long as they're from the right model year and clear the DMV database as not belonging to any other vehicle. The legacy plate program lends a more authentic touch to a vintage car that would otherwise have the modern reflective metallic white plates with blue characters and red California script. The owner here has actually modified a set of modern white plates and hand-painted them to look like period 1976 plates -- the CALIFORNIA block letters are painted on instead of stamped into the metal. The effect is convincing enough that I was fooled until I looked closely at the original resolution photos in my archives. I have mixed feelings about the legacy program since a lot of people just want plates that match the color of their modern cars.
I'd like to see this car cleaned up and detailed a little with four matching thin whitewall tires and a new passenger side rub strip. Otherwise this is a very solid original Pacer and a great example.
Posted by Jay Wollenweber at 12:00 AM