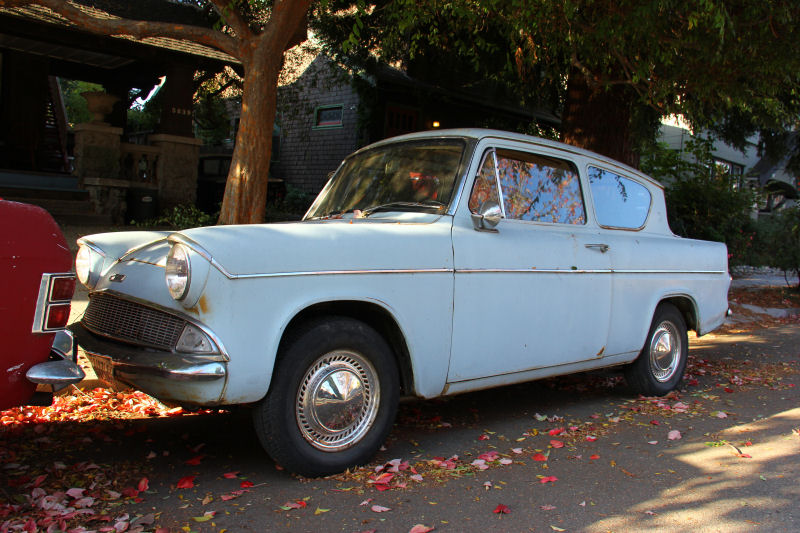 Ask anybody in the United States who never owned one of these cars, and chances are they won't know what it is. Tell them it's a Ford and they'll be confused. Then show it to a kid and they'll tell you it's the Weasleys' flying car from the Harry Potter movies. And indeed it is. It's a Ford Anglia 105E. 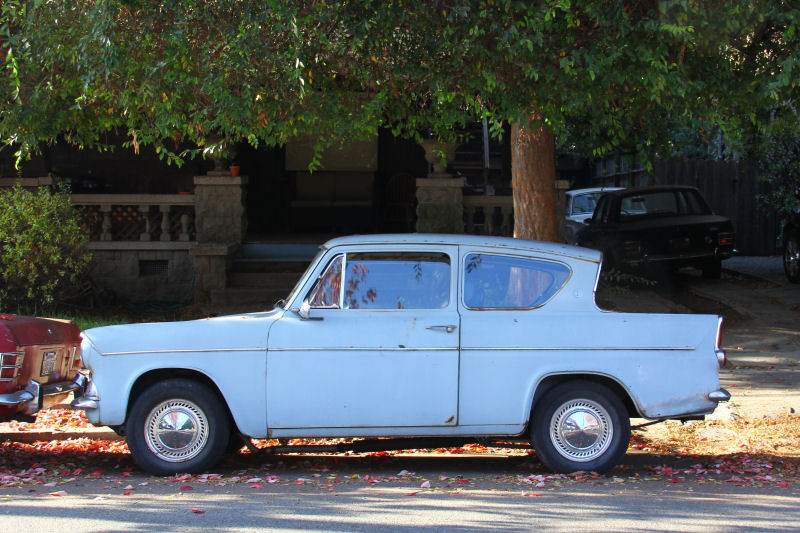 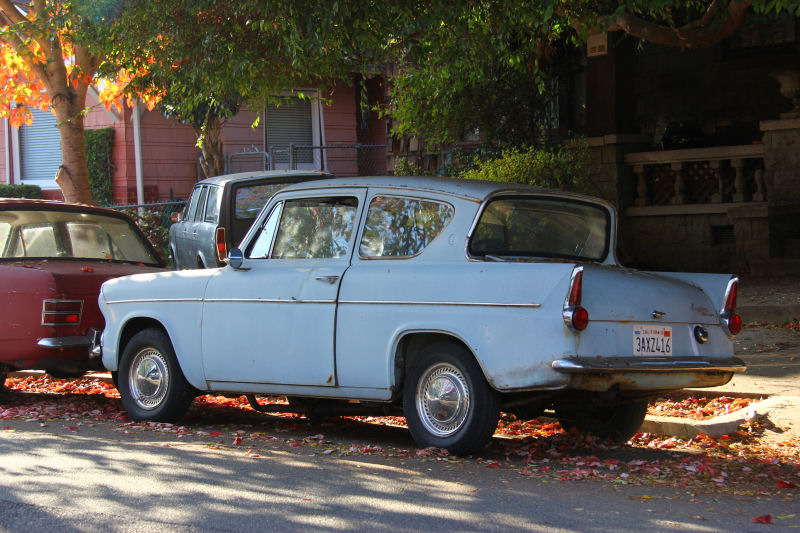 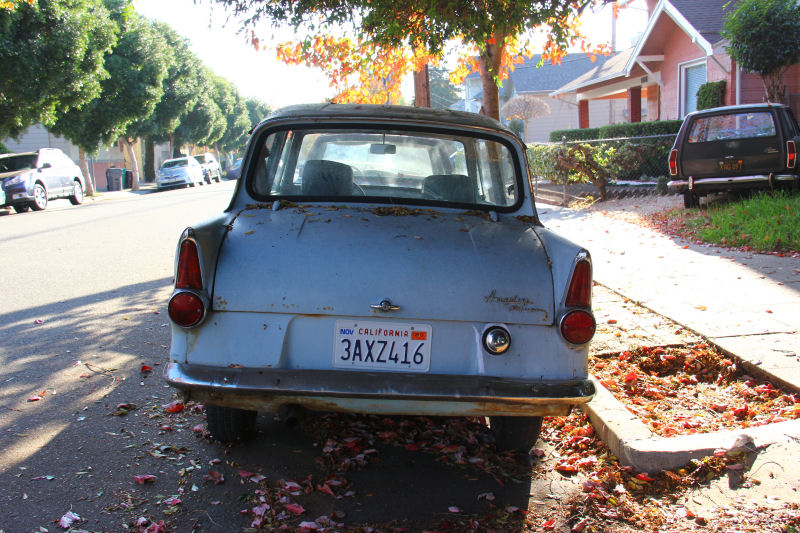 The Ford Anglia hails from Ford's campaign to sell some of their smaller European offerings in North America as a budget and efficiency option. This effort began in 1948 and consisted mainly of the Anglia, Prefect and Thames commercial van. These were mostly pre-war-styled, dowdy, relatively primitive cars and didn't sell particularly well in a market used to flathead V8s and three-abreast seating. A new generation of modernized Anglias in the mid-1950s and another redesign in 1959 finally brought the model a little more into the mainstream. The '59 Anglia showed a clearly American influence with more chrome, small tail fins and a reverse-raked rear window inspired by the Breezeway window on the 1958 Lincolns. Engines were still small-displacement four-bangers, but the new cars were light and tough and subsequently enjoyed success in Canadian and European rally racing. The little Anglia finally had a sporting pedigree. Mind you, that meant 39 horsepower and 0-60 in 29.5 seconds. The Anglia 105E is notable as the first production Ford sedan to benefit from a four-speed manual transmission. 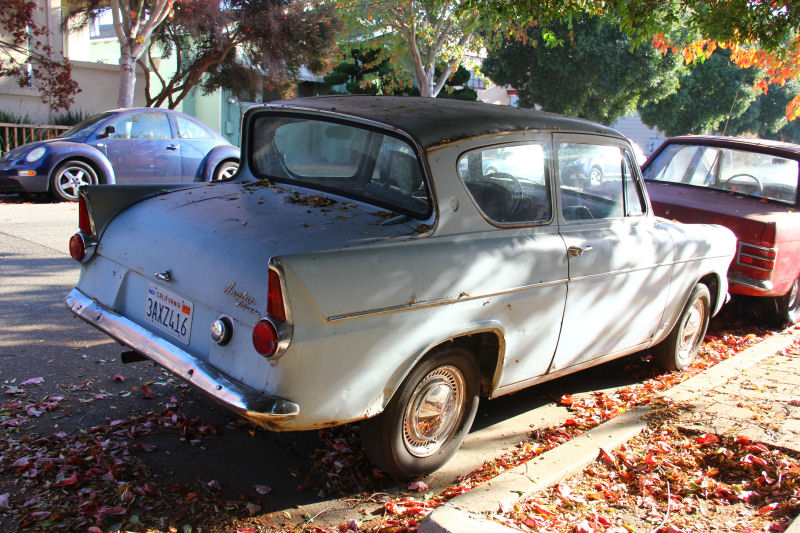 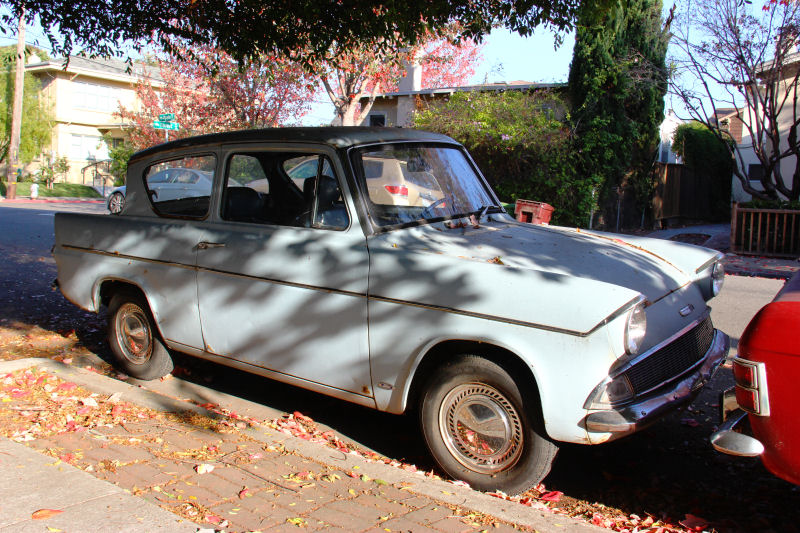 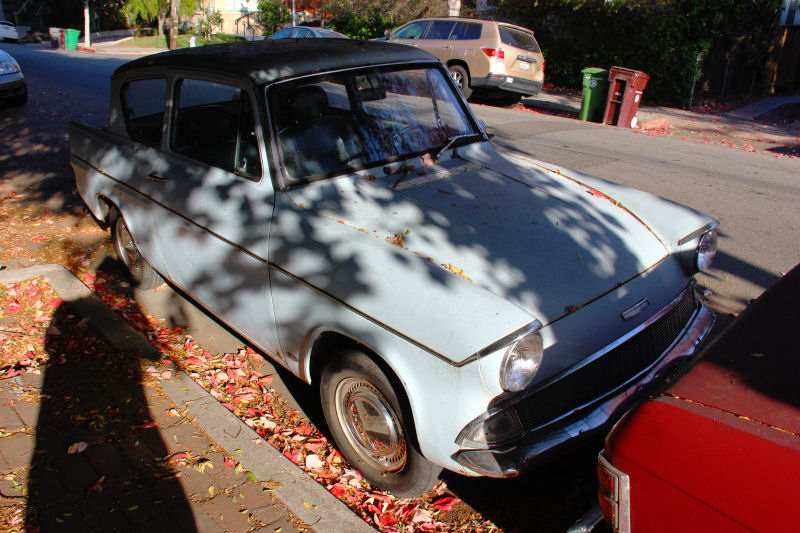 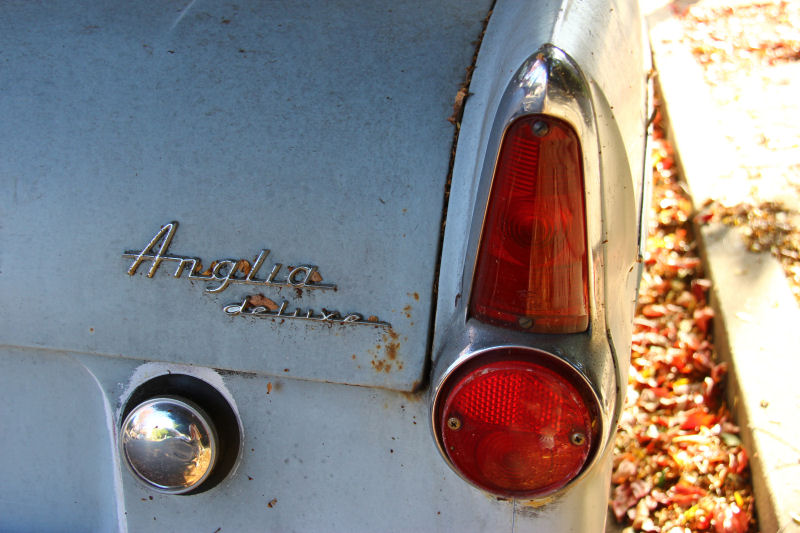 I'm not totally certain what year this Anglia is. Bill Stengel of The Street Peep photographed it long before I did, and estimated it as a 1964 model. All years of the 105E were available in Standard or Deluxe trims, the former a bare-bones car while the latter, seen here, featured more decoration and standard equipment such as pop-out rear quarter windows for ventilation. The 105E barely changed at all visually, though late 1965 models received a revised grille. This car apparently belongs to the Cortina collector, a bit of an odd sock among his four other Cortinas. I'm bummed that the late-afternoon-dappled-shade lighting was so poor and the car was parked so close to the red Cortina sedan that I couldn't get a front shot. I kind of like these little cars and I'm happy to have found one, even if my pictures are terrible. Maybe I'll get lucky and be able to re-shoot it someday.
Posted by Jay Wollenweber at 12:00 AM