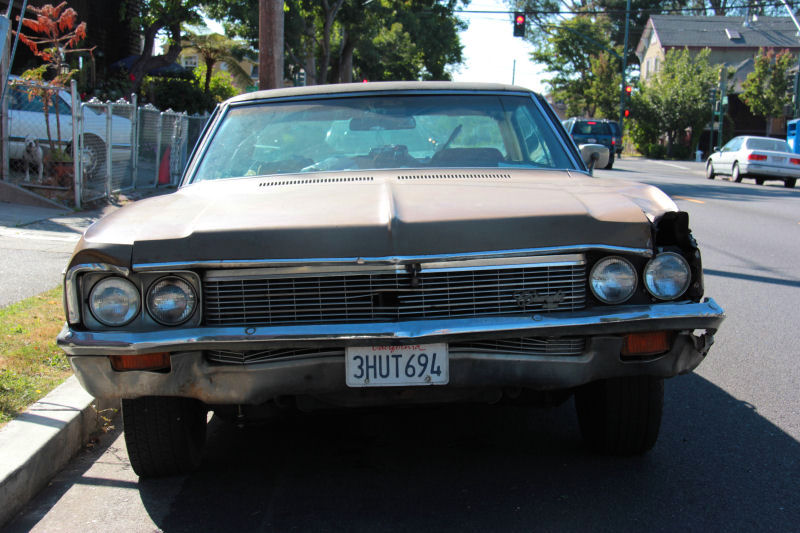 Admittedly I usually don't like photographing really beat-up cars but I do if they're interesting or uncommon. A 1970 Chevy Impala four-door hardtop used to be a common sight on America's roads, but certainly isn't anymore. GM produced over 600,000 Impalas in 1970, the vast majority of which were V8 cars. This number does not even include low-trim Biscaynes and Bel Airs or high-trim Caprices! I have seen an estimate of 46,000 for Impala Sport Sedan production but no actual number seems to be available. 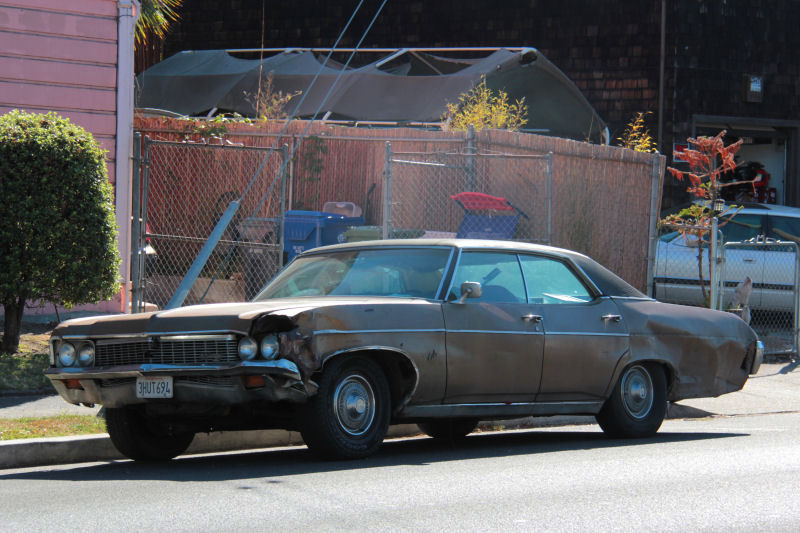 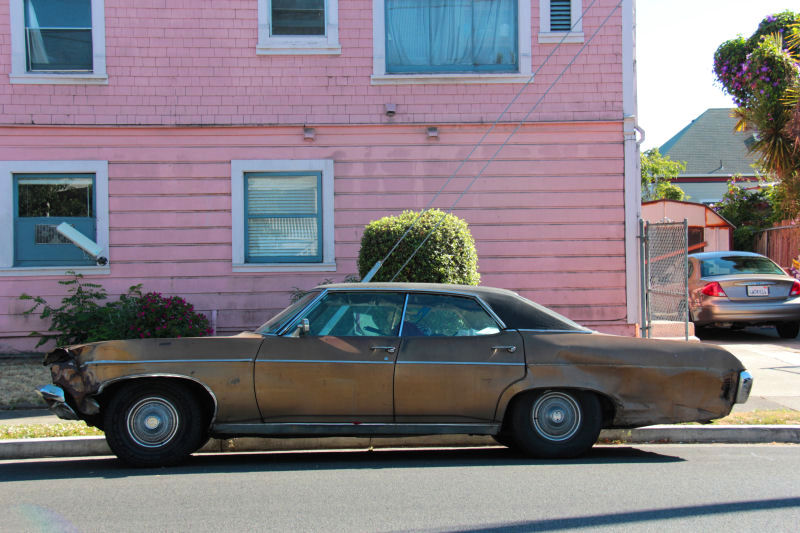 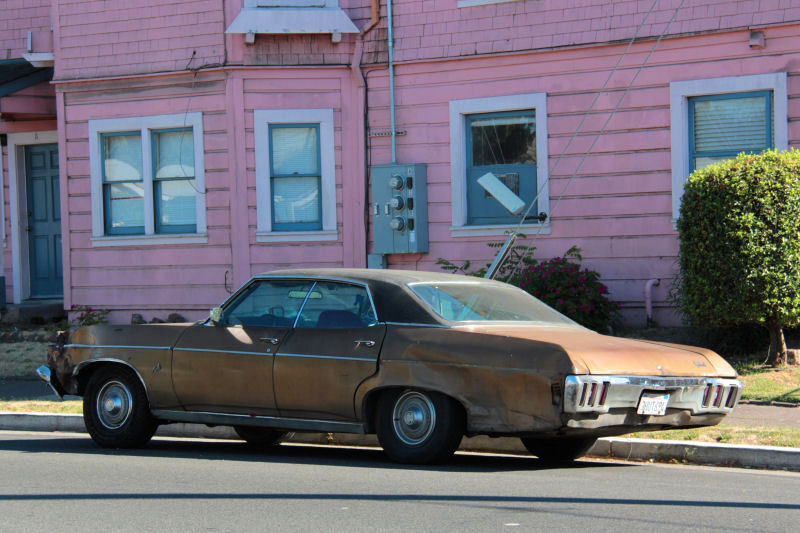 Most Impala buyers were average people who liked average cars, a safe and reliable choice that wouldn't lose resale value, rode comfortably and was big. The cars were conventional almost to the point of mediocrity, and the public for the most part was okay with that. The Impala was available in fastback Sport Coupe, notchback Custom Coupe, convertible, four-door sedan, Sport Sedan and Kingswood station wagon in 6- or 9-passenger versions. Virtually anything a buyer wanted was available in the options list, from bigger V8 engines to multiple manual and automatic transmission options to front disc brakes (front drums were standard for the last time in 1970), to Positraction rear end. Even a ski rack, fire extinguisher and tissue dispenser were available (I assume as dealer options). A 250 Turbo-Thrift six was standard with a 350 Turbo-Fire V8 optional, and a hotter 350, 400 or 454 available at extra cost. The '70 Impala was the last refresh of the old 1965 body and still offered a little bit of style, just enough to keep people interested without appearing gaudy. Oddly, 1970 was the first year since 1948 that Chevy full-size sales dropped under 1 million units. (The all-new 1971 full-sized models also totaled fewer than 1 million cars, but outsold the '70 by a wide margin). 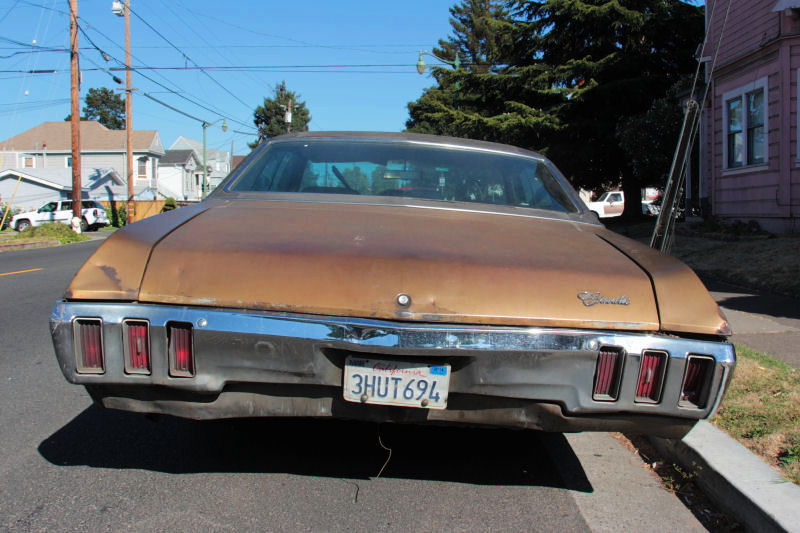 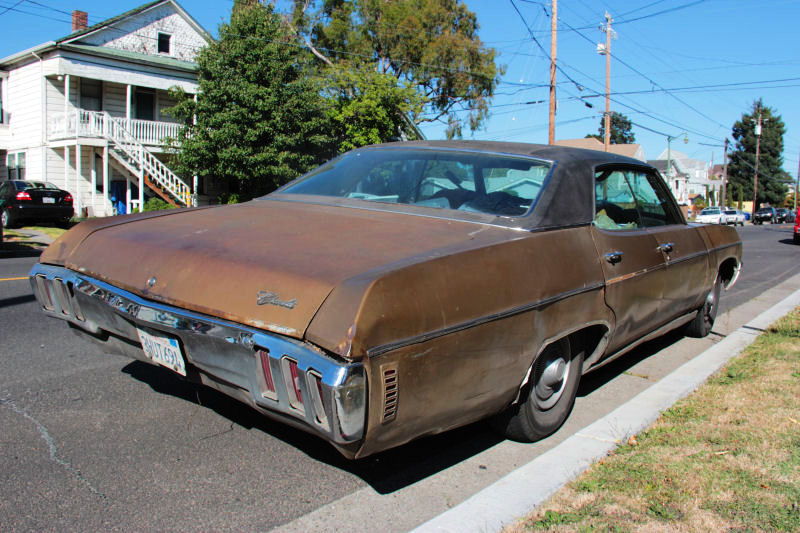 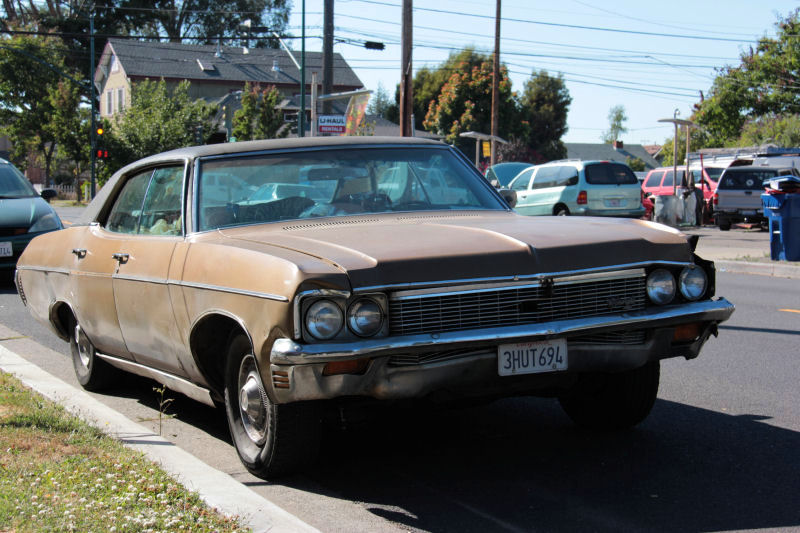 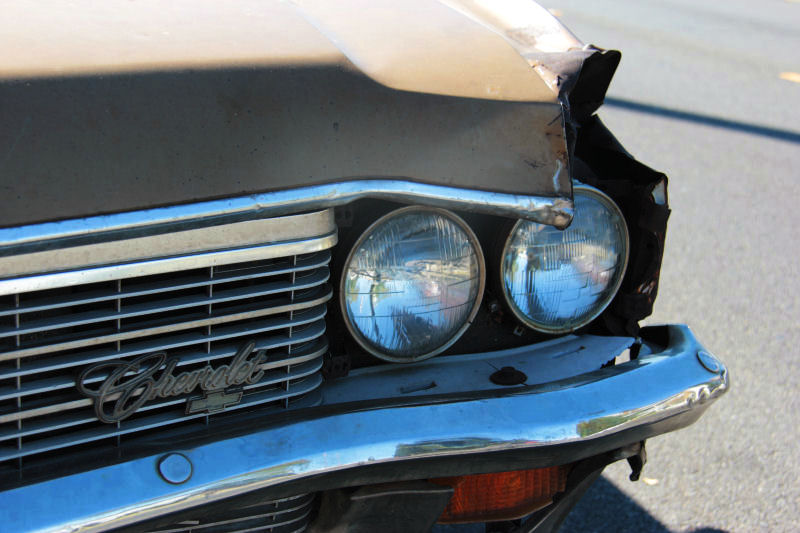 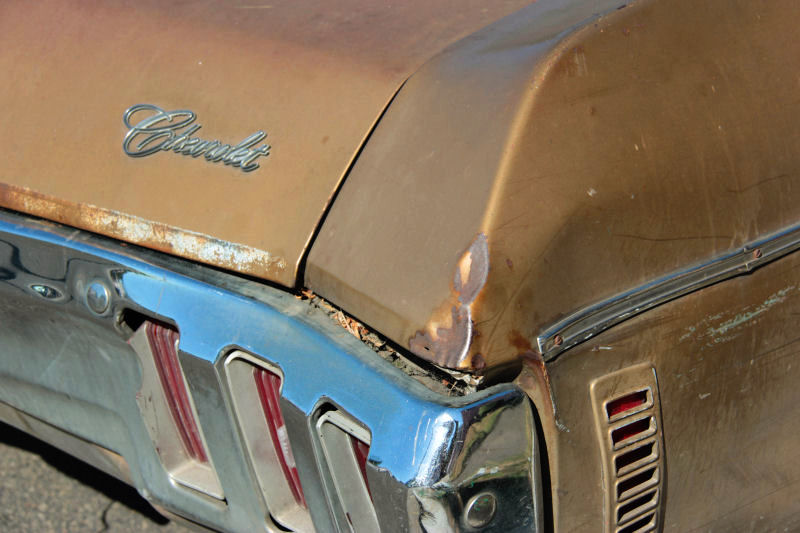 This car is kind of a mess, unfortunately. Looking at it, it used to be a pretty nice Sport Sedan with a black vinyl roof over what looks like Autumn Gold metallic. The roof looks more like brown to me, but brown wasn't a factory top color in 1970. The Magic Mirror acrylic lacquer paint has fought hard against the ravages of time and several accidents, still managing to reflect the curb on the car's right side. The left front fender and rear quarter panel are toast, and several of the remaining panels are tweaked or creased. All of the hubcaps are still present, though, and the chrome is in surprisingly good shape even with some bumper damage. Despite all the wear and tear, as long as it's fine mechanically it will probably keep going for a while longer. This car was featured on Jalopnik in 2007 and described as belonging to the owner of the '61 Thunderbird I featured here back in 2012. Seems he likes keeping beat-up old cars on the road that most other people would have parted out by now. I can appreciate that.
Posted by Jay Wollenweber at 12:00 AM