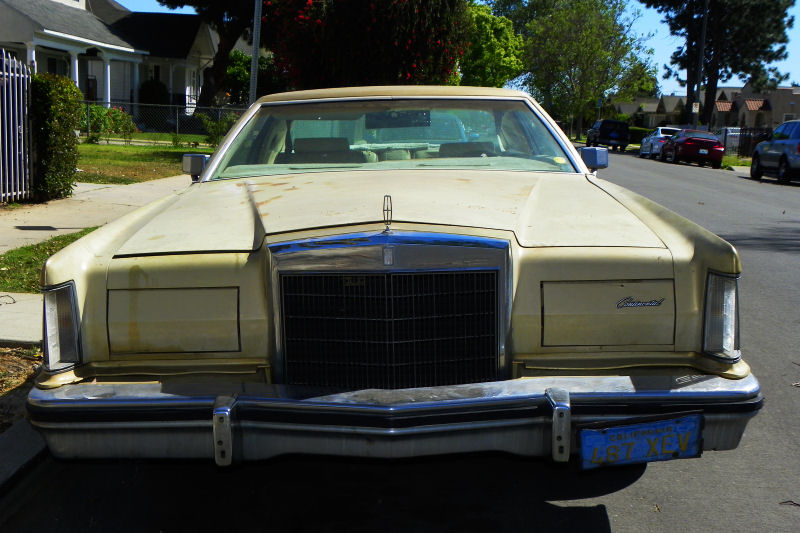 Okay, full disclosure. This car belongs to my friend, who purchased it in L.A. a few years ago for $600 to save it from being crushed. These photos were taken the first time I ever laid eyes on it. This is also perhaps the only street sighting to date which I've actually ridden in. 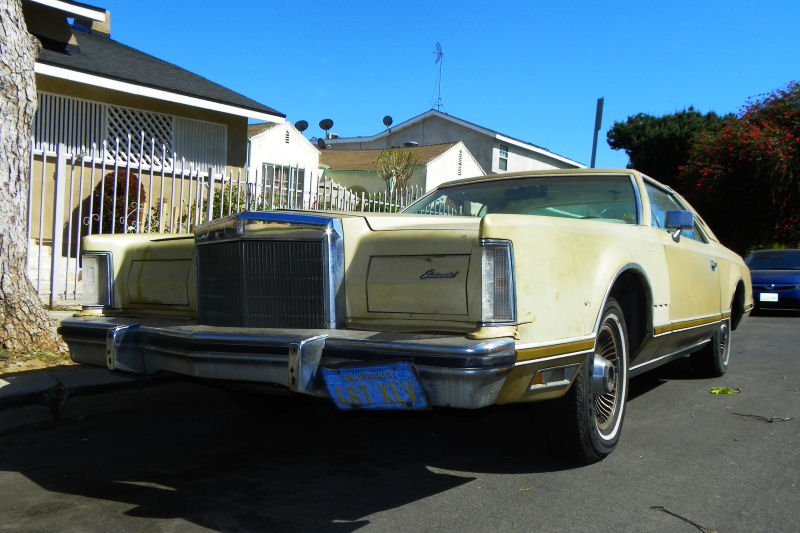 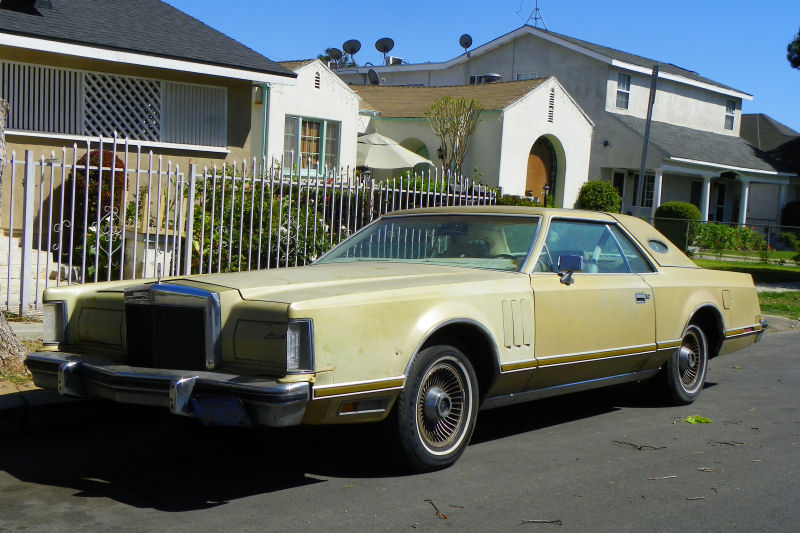 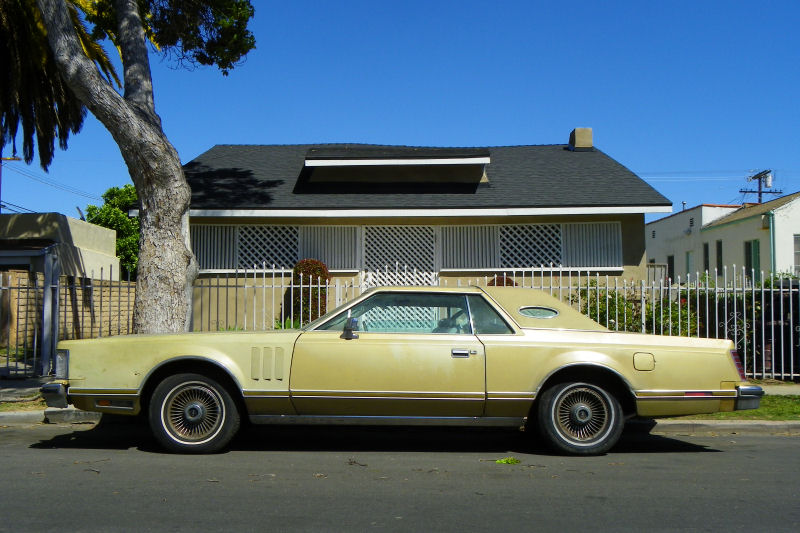 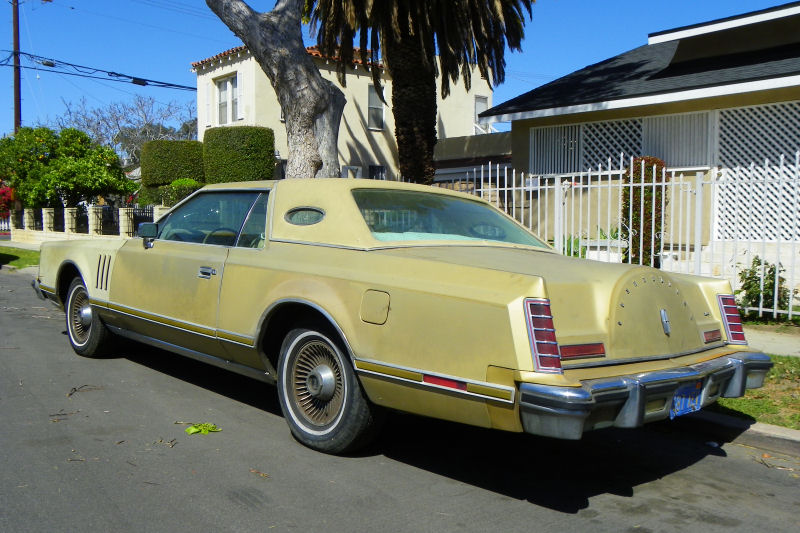 I love the Lincoln Continental Mark V. In good condition these cars are some of my favorite American luxury vehicles, even if they are a tad vulgar. The giant car with its slab sides, sharp edges, hideaway headlights, fender vents and opera windows screams Malaise era. The doors have their own zip code, the roof has obligatory padded vinyl and the trunk has a fake spare tire hump that hides absolutely nothing. 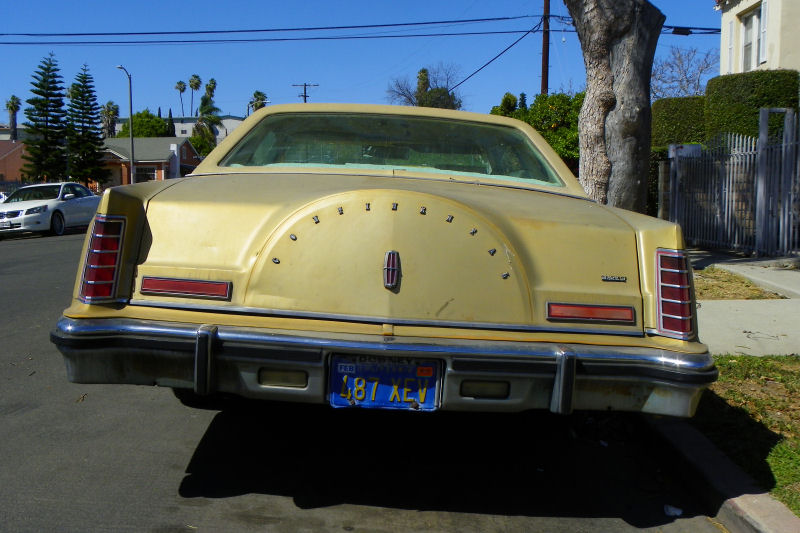 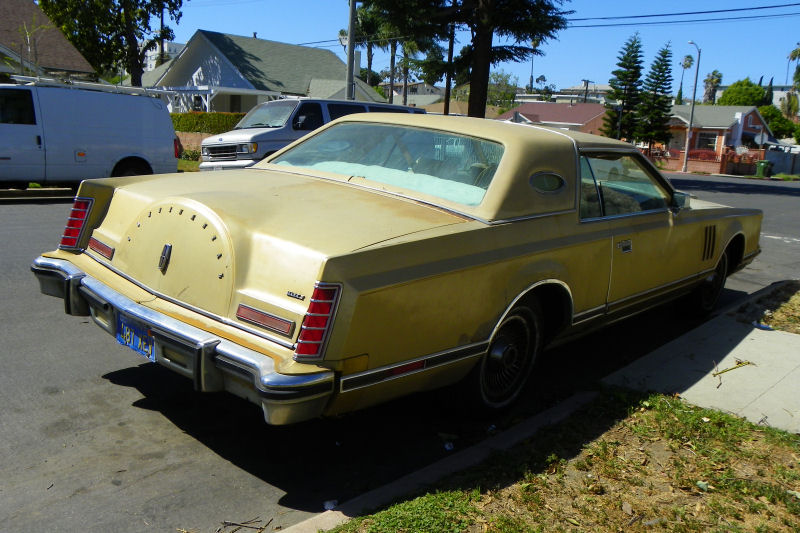 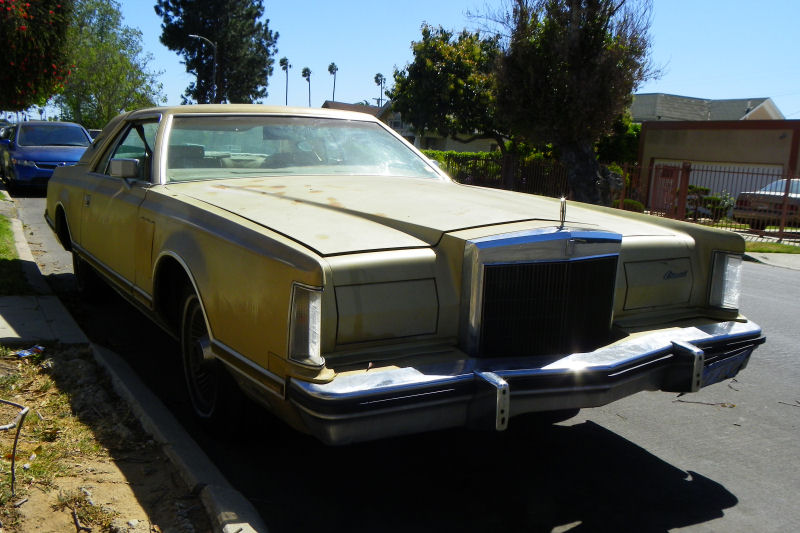 This car was sold new at Sachs and Sons Lincoln-Mercury in Downey, to a Greek couple who owned a restaurant. It appears to be a standard model, though that doesn't mean it was a cheap car when new. It just means it doesn't have auxiliary coach lamps on the C-pillars, padded vinyl treatment on the spare tire hump or a designer nameplate (unless you count the Cartier dashboard clock, standard in all '79 Mark Vs). It does come equipped with turbine-style aluminum wheels, optional Valino grain Landau roof, cassette tape player and interior convenience package with cruise control and "headlamp convenience group", which I assume might be auto-dimming headlights. One interesting feature is a digital range computer which indicates the number of miles to empty. Speaking of miles to empty, a thirsty 400 cubic inch V8 motivates the car. This is a challenge for ownership as the car is subject to California emissions testing forever unless the state changes its law exempting only 1975 and older cars from smog tests. 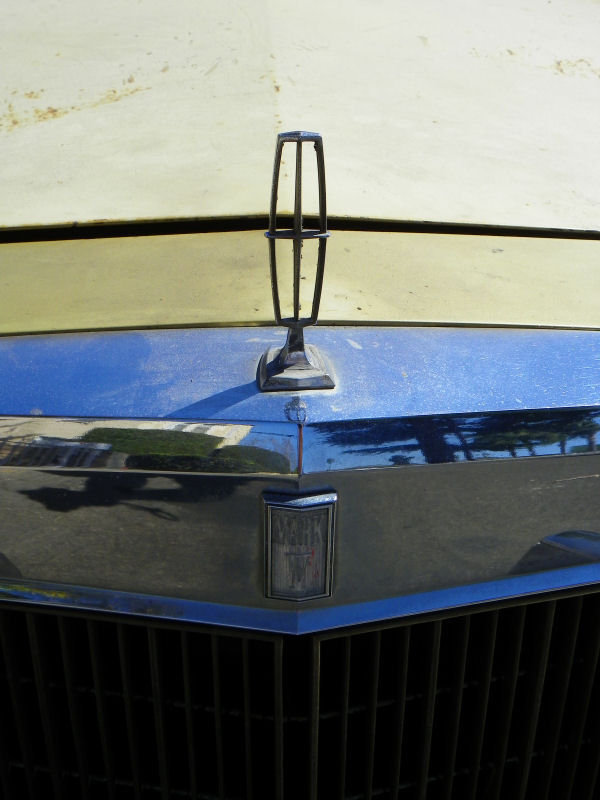 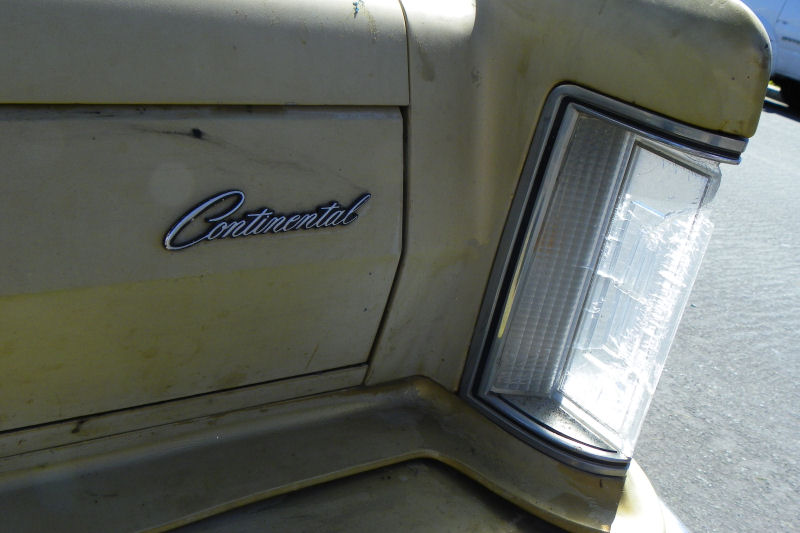 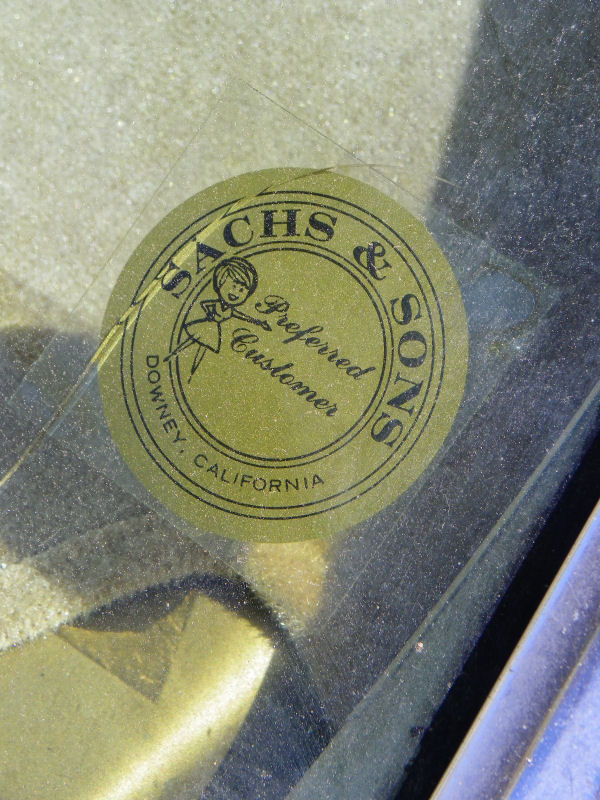 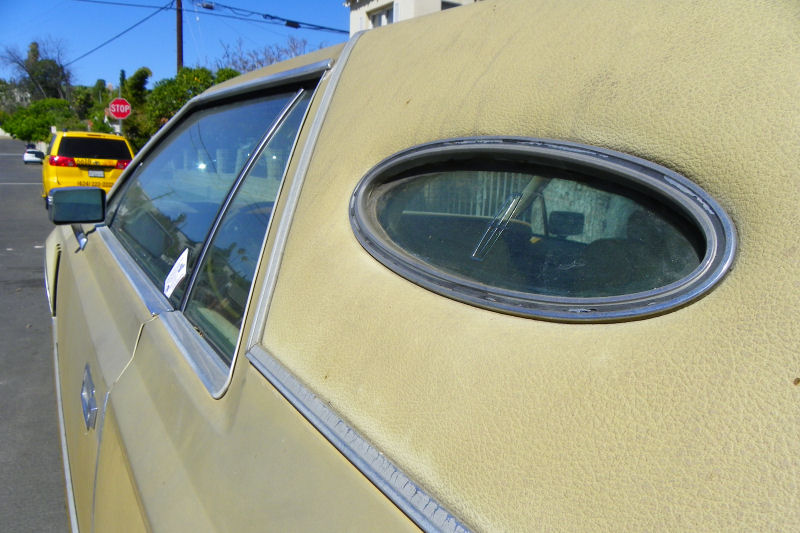 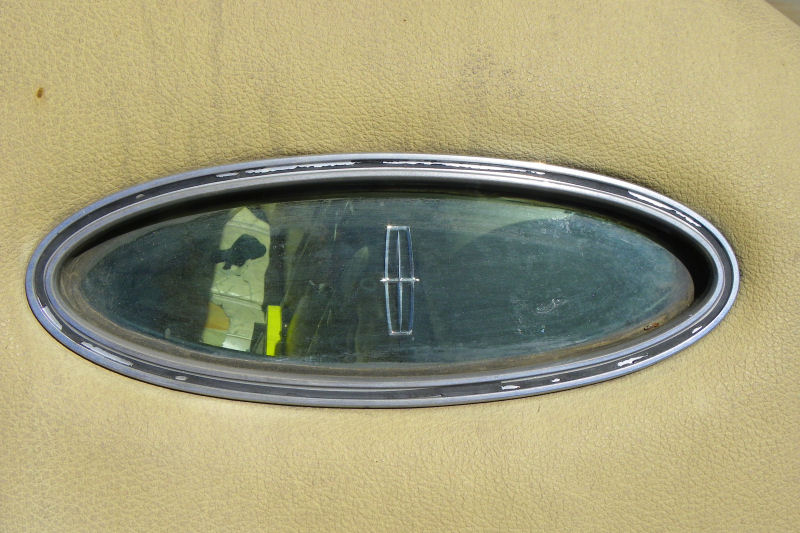 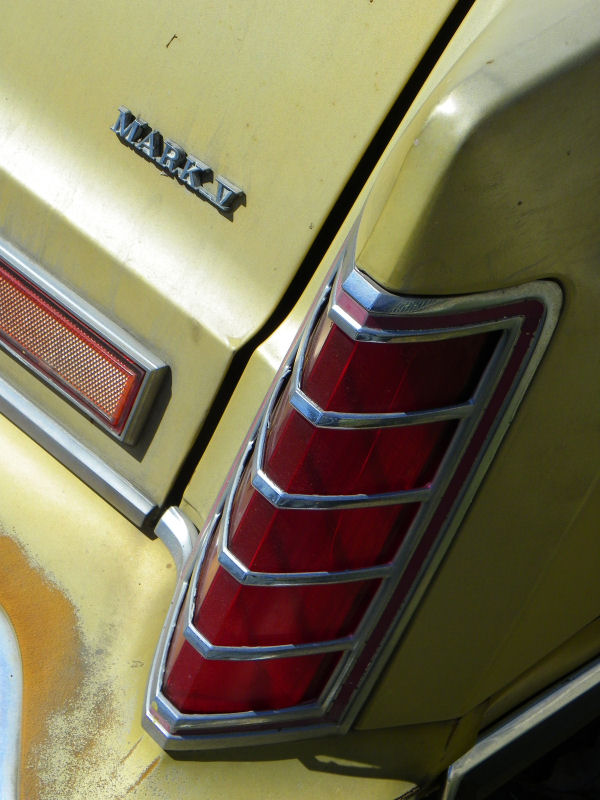 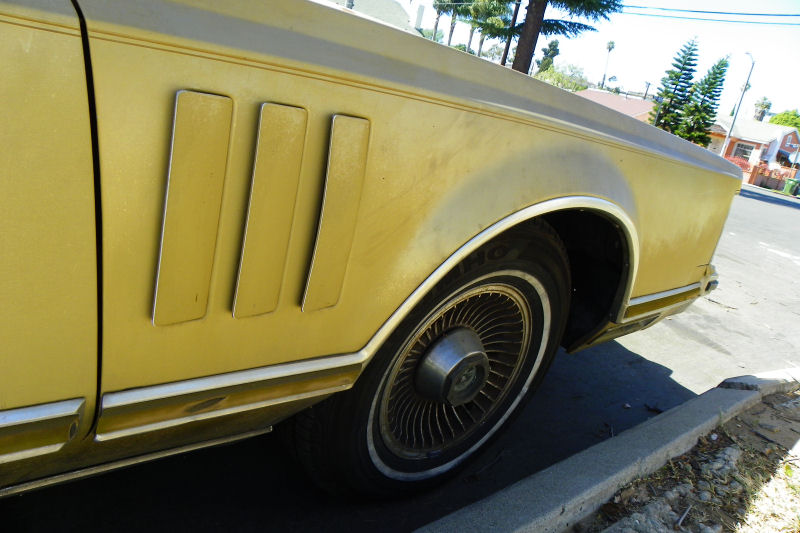 The original owners always parked the car outdoors. As a result, the paint and interior baked over the years, turning Jubilee Gold Metallic into a dull and chalky mess. The interior has perhaps suffered the worst abuse, thanks to some teens who got into the car while under the effects of illicit substances and tore up the cream leather seats and headliner. A number of the gadgets no longer work, though the power windows still wind up and down (very slowly) and the door ajar sensor still emits a sickly-sounding buzz when a door is open. The body has some minor accident damage and some rust, the worst of which is at the bottom of the rear window. 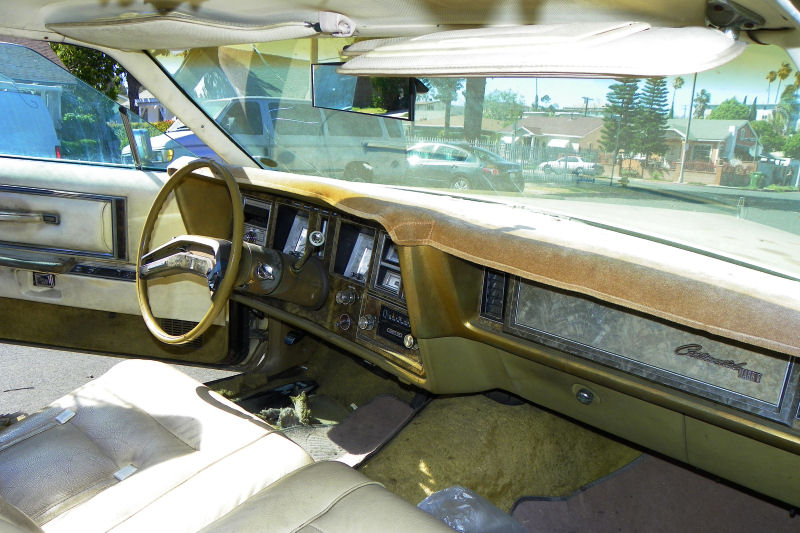 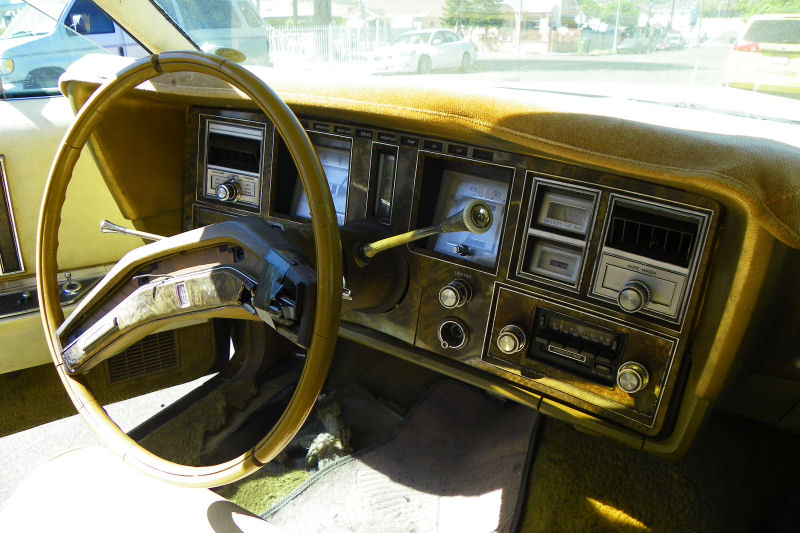 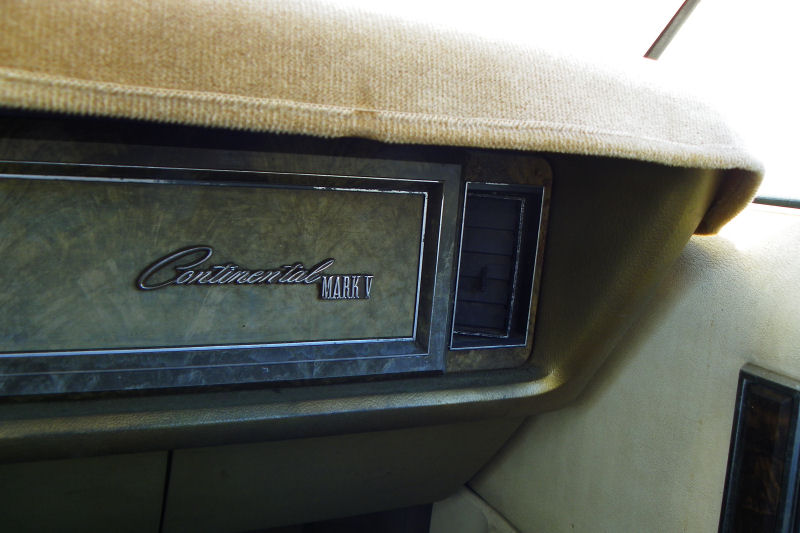 I affectionately refer to this car as the Gilded Garbage Barge and I know it's in rough shape, but I'd really like to see it properly repaired one day. My friend plans to get it cleaned up and reliable, though we both know it will take some doing and a lot more money than the car is worth to achieve that goal. I've ridden in it a few times and it rides smoothly as a Lincoln should. Spirited handling is out of the question as it bobs and sways like a boat. You don't so much drive it as captain it, and parking is always interesting. The Barge has potential: I would prefer to see it restored to stock, though my friend the owner doesn't like the original paint color. Whichever color he chooses, I hope it does the car justice. I'm rather partial to Crystal Blue Metallic myself.
Posted by Jay Wollenweber at 12:00 AM