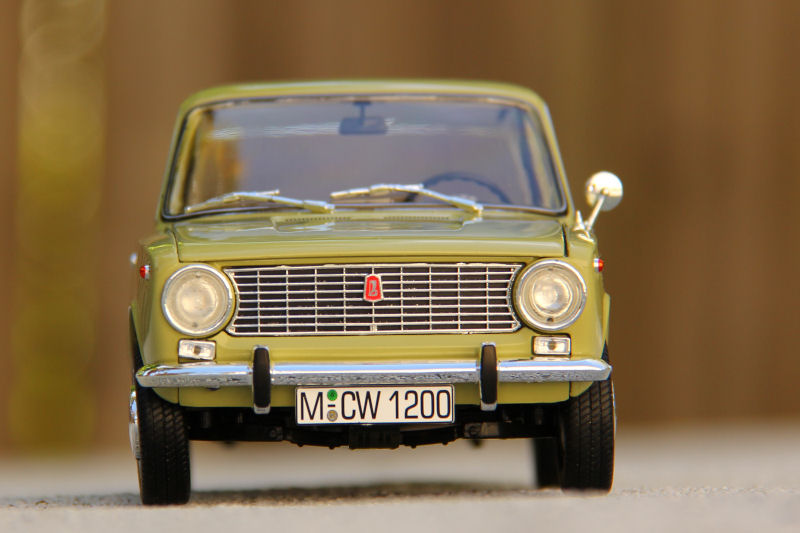 It's been a while since I did a diecast feature, and with Christmas coming it's time to do more. This is also when winter wreaks havoc on Russian roads and it makes for wild dash cam crash footage on YouTube. Put them together and you have a diecast model of a classic Soviet car, the 1971 Lada 1200, also known as the VAZ-2101 Zhiguli. It was AvtoVAZ's first model, a licensed copy of the Fiat 124. The Lada used thicker steel, softer suspension and tougher, simpler components compared to its Italian cousin. 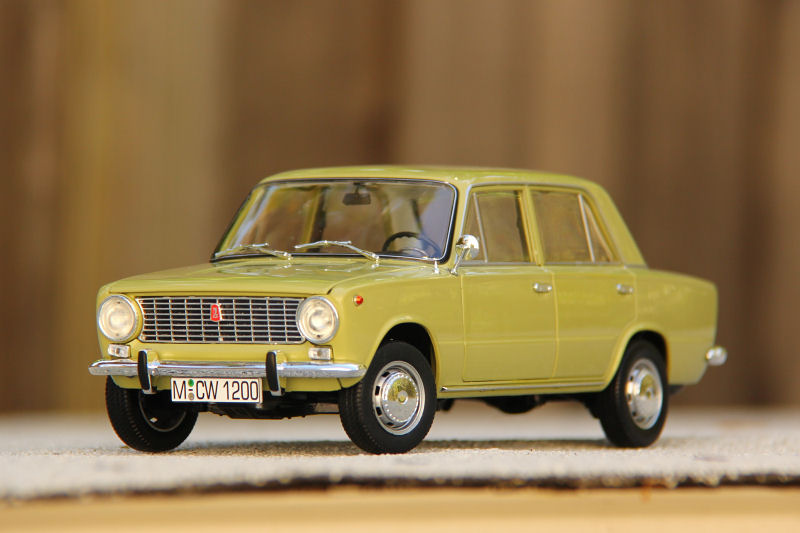 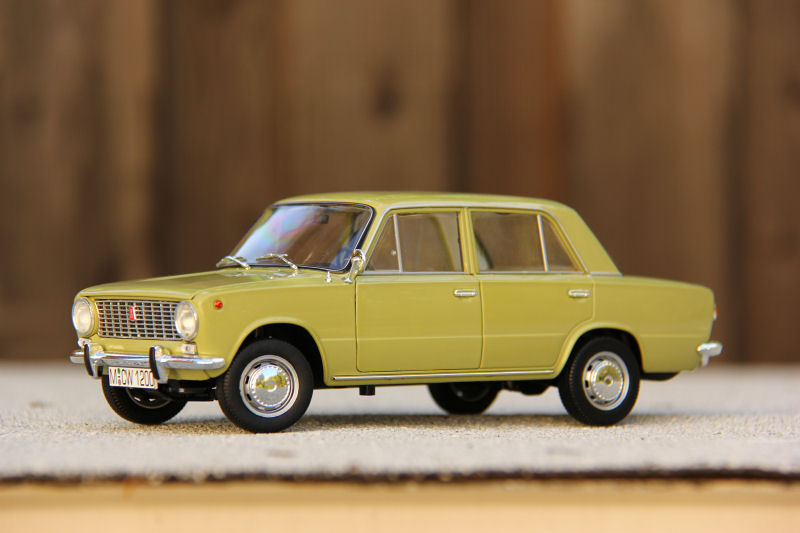 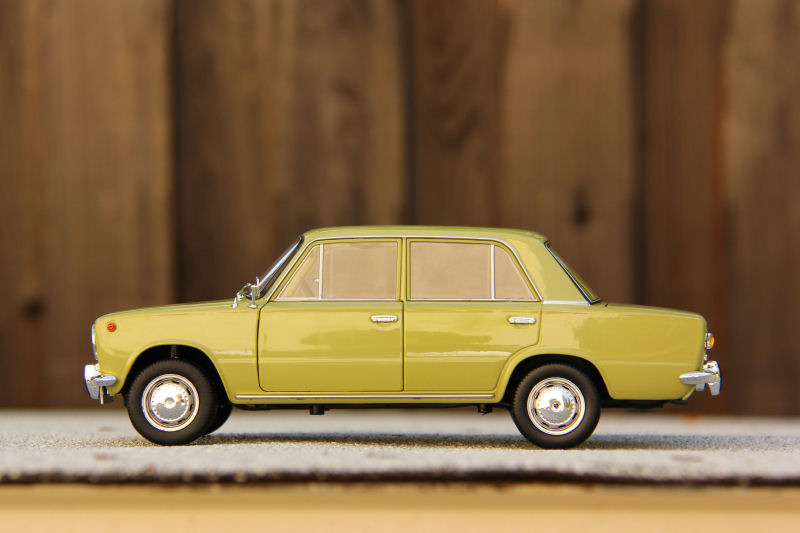 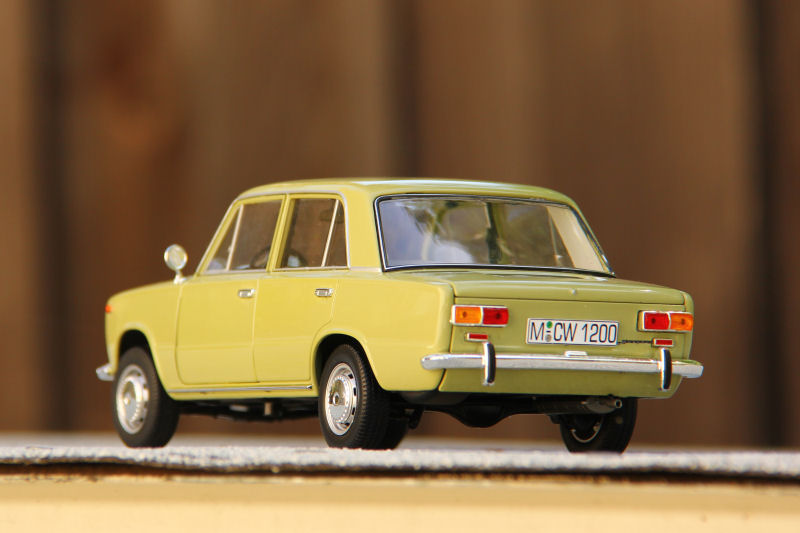 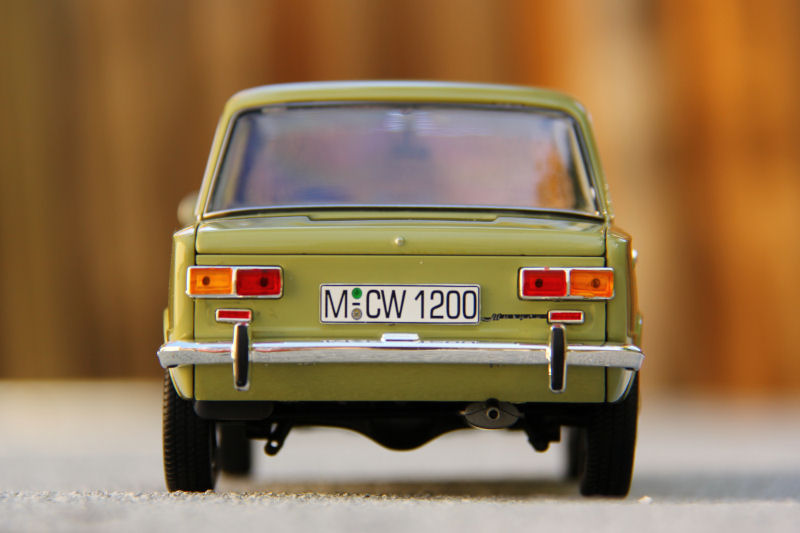 This diecast was made by IST Models and has been released in several colors, and interestingly the same casting has been released as various rebadges of the same car. You can get it as a Fiat 124, Seat 124 and also as a Lada police car. I tried to get one of these in a cream white color from a British diecast website but I let it go when I found that it would cost nearly $40 to ship overseas. I settled for this institutional green one from Germany, a special limited edition made for ModelCarWorld.de. It's number 810 of 1012 produced. 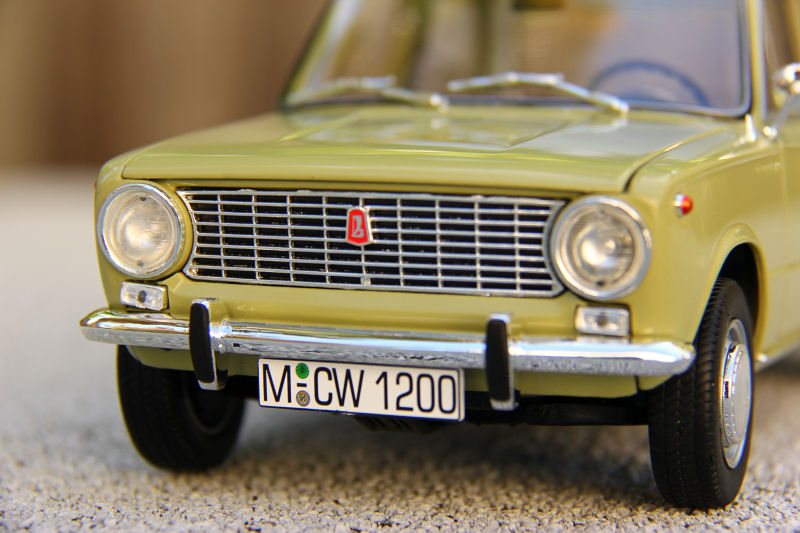 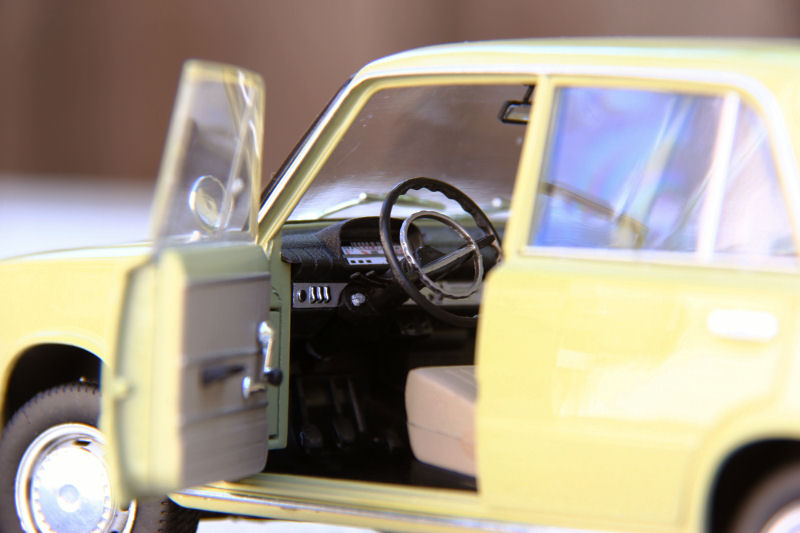 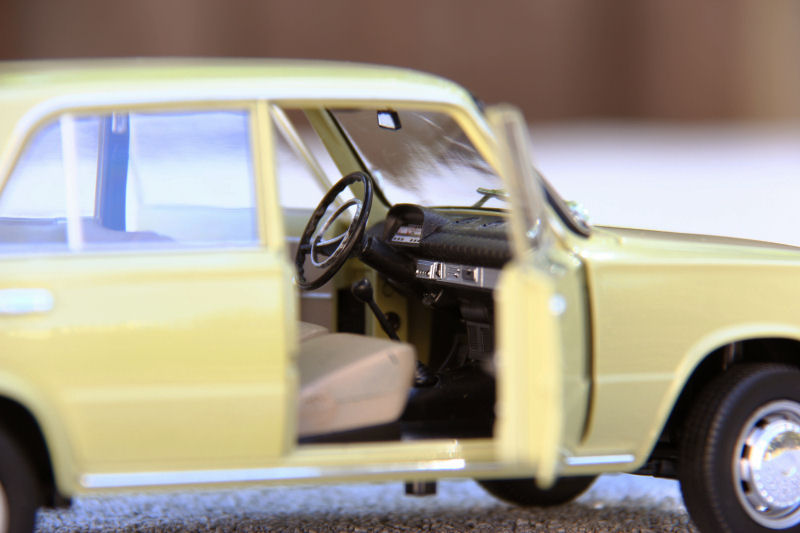 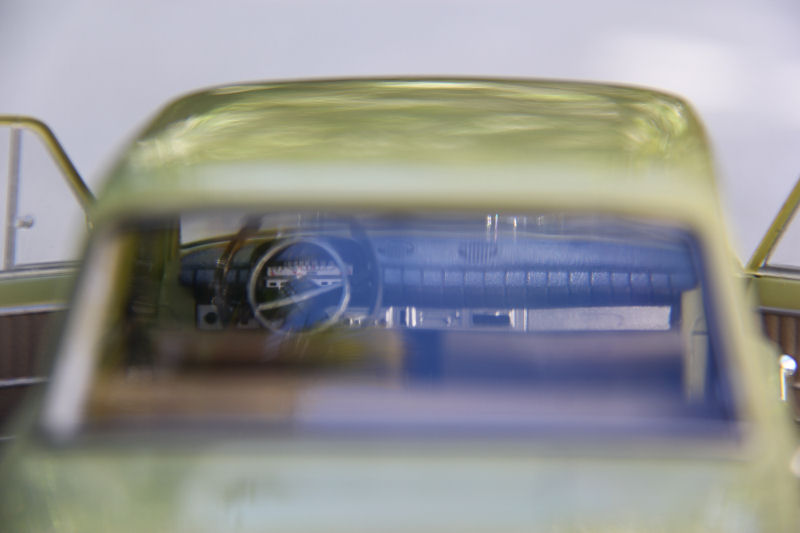 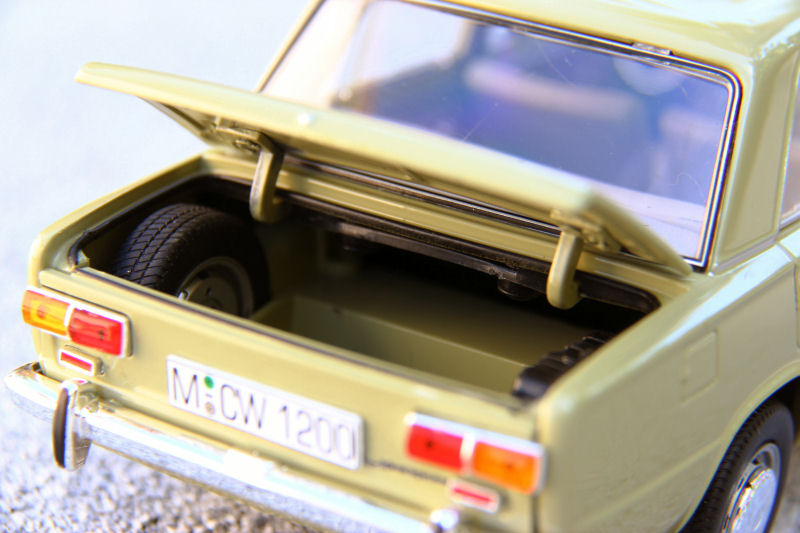 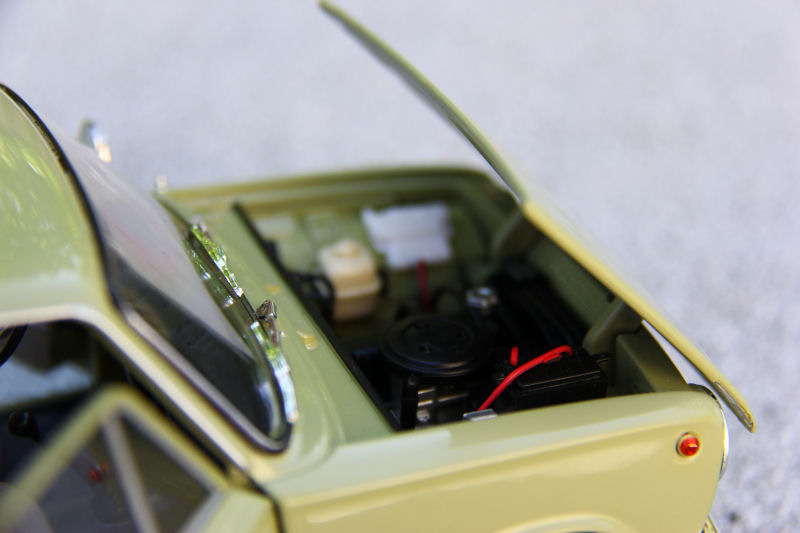 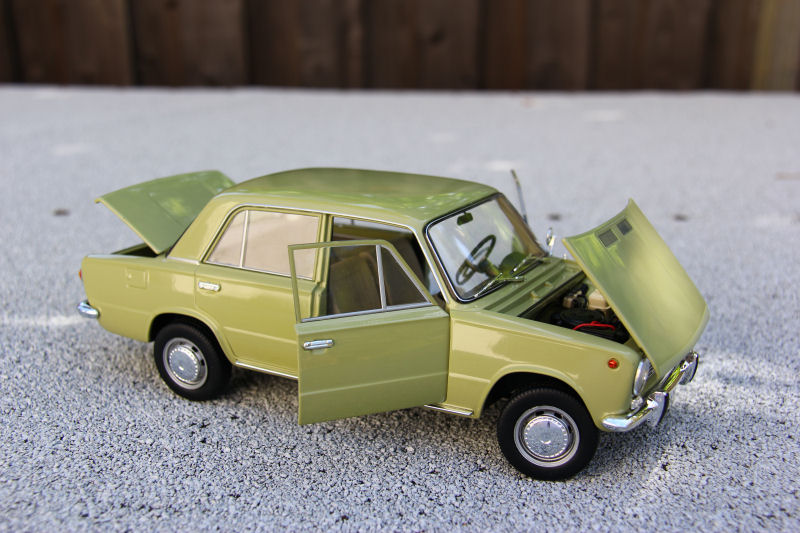 Looking at the model, it looks the way one would expect an old Soviet-era sedan to look. Boxy, utilitarian and basic. The timeless Italianate styling is still there, but the depressing olive color gives it a decidedly proletarian feel. The front doors, hood and trunk open with nicely executed hinges, though with the windows in a permanently shut position and the door handles as tiny, separate plastic pieces I'm afraid of pulling off of the car, the doors can be difficult to open. The hood is hinged at the front and reveals the tiny 1.2 liter engine. The engine is detailed well enough for a model at this price point, and the interior is very good with individual knobs and switches painted and the window cranks and interior door handles cast as separate pieces from the door panels. The side mirror is attached to the fender instead of the door which is actually a correct detail for this model year. I wish the rear passenger doors opened, but that might make the model extremely fragile if it was engineered that way. I also wish that the plastic tubes extending out of the bottom of the car to secure it to the display base weren't so conspicuous. They stick out so far that they appear in several of my pictures. Certain details are not put together as well as they could have been, with crooked installation of the front turn signal and some bits of plastic on the grille and taillights where you can tell the piece came off of a parts tree during assembly. I could probably clean them up with an X-Acto knife if I felt so inclined. 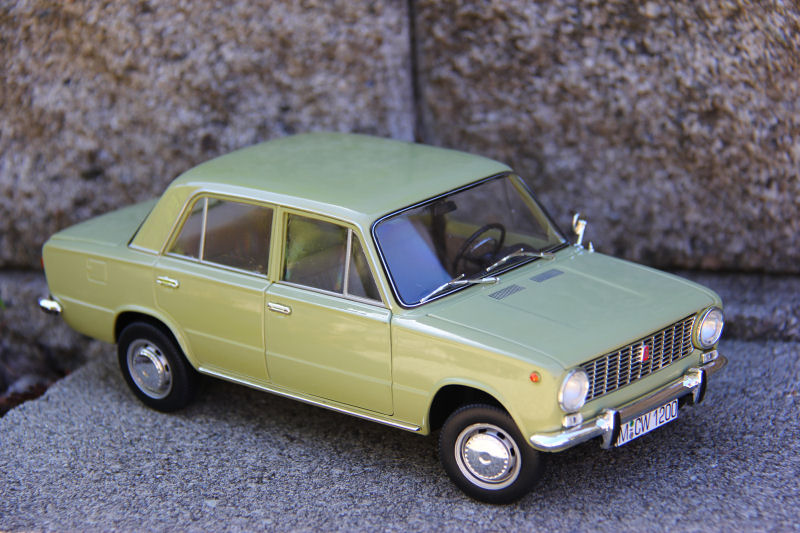 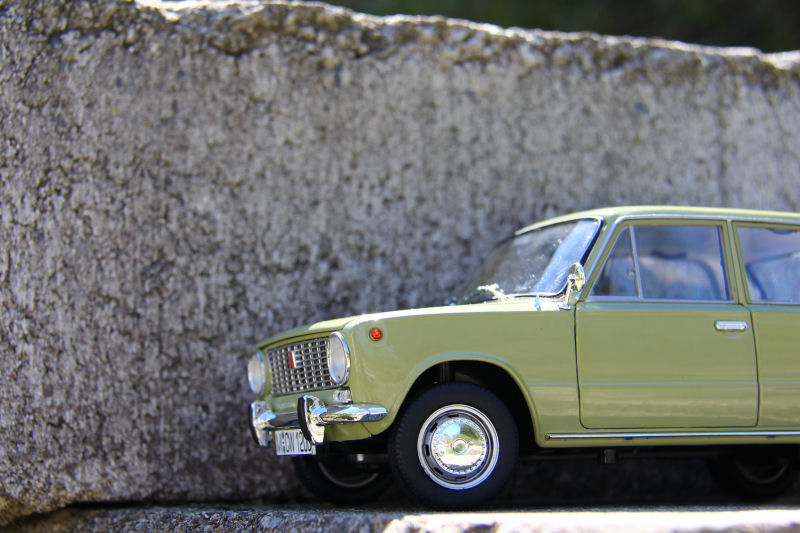 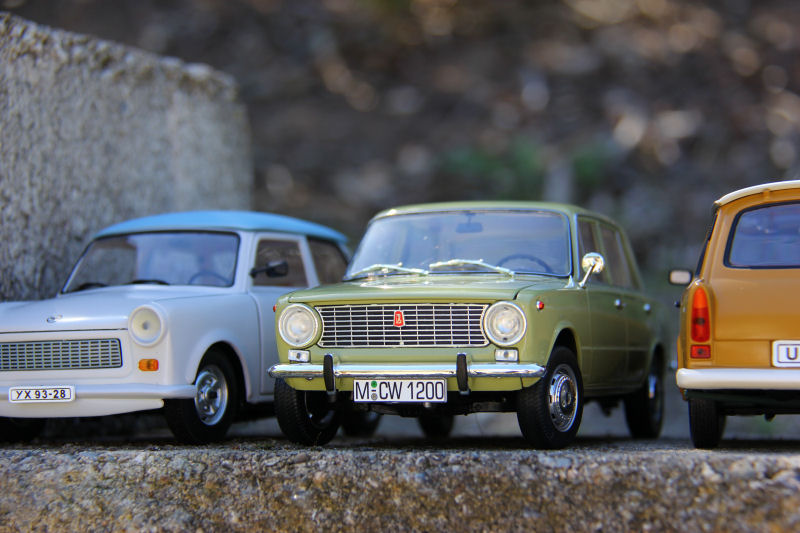 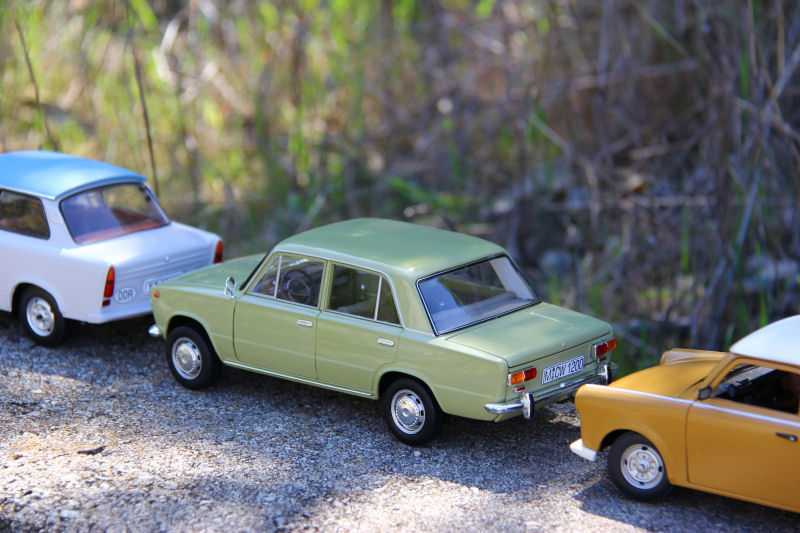 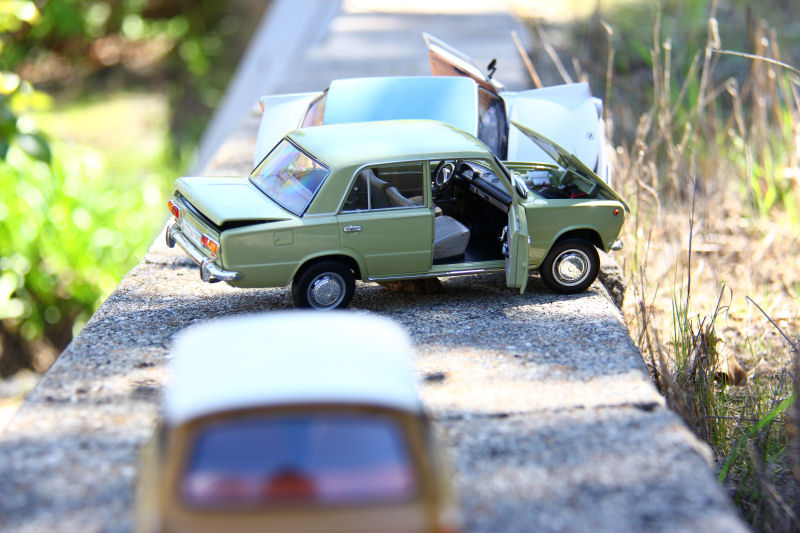 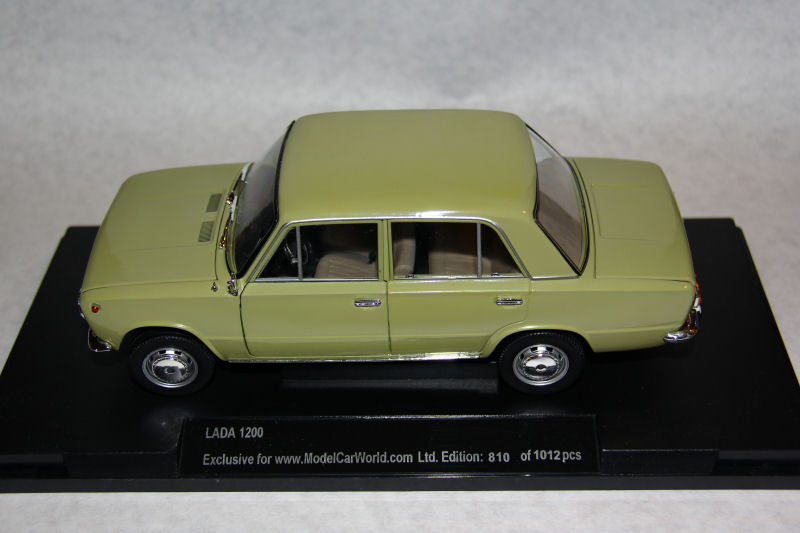 I would have really wanted a 1:18 of a VAZ-2103, a slightly newer and better equipped car also based on the Fiat 124 and featuring a quad headlamp setup. Unfortunately no one makes the 2103 in this scale yet, so the 2101 is the next-best thing. If you like old Soviet cars you may want to add one of these to your collection. Likewise, if you're into old Italian cars or Spanish cars, check out the Fiat or Seat versions. They're usually cheaper anyway. Dosvedanya!
Posted by Jay Wollenweber at 12:00 AM