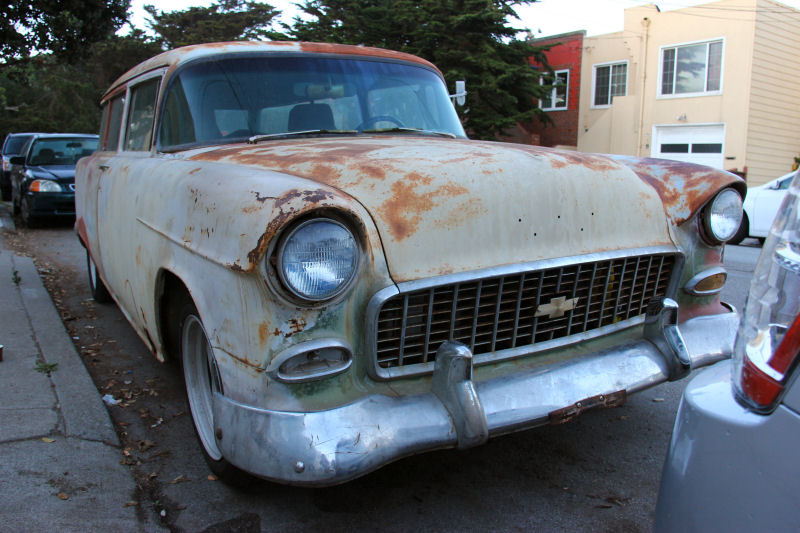 It seems like at car shows, at least, a lot of people don't know the difference between a 1955-1957 Chevy Bel Air Nomad wagon and the standard two-door station wagon. The biggest clue, aside from side trim, is the B-pillar. Nomads have a forward slant to the B- and C- pillars, and the rear hatch is also raked forward more dramatically than the regular wagons. As the Nomad was an offshoot of the fancy Bel Air, it carried special side trim and seven vertical chrome spears on the rear hatch. The One Fifty Handyman was the bottom-rung wagon in the Chevy lineup and typically carried no extra body trim at all except for a "Chevrolet" script badge on the front fenders, hood ornament and large red, white and blue Chevrolet shields on the hood and rear tailgate. Two-Tens had a simplified version of the Bel Air's side trim and more luxurious interiors. 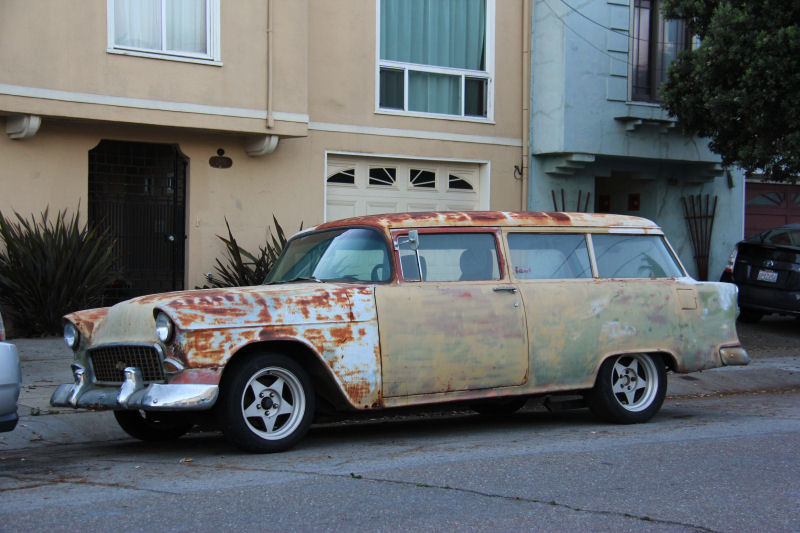 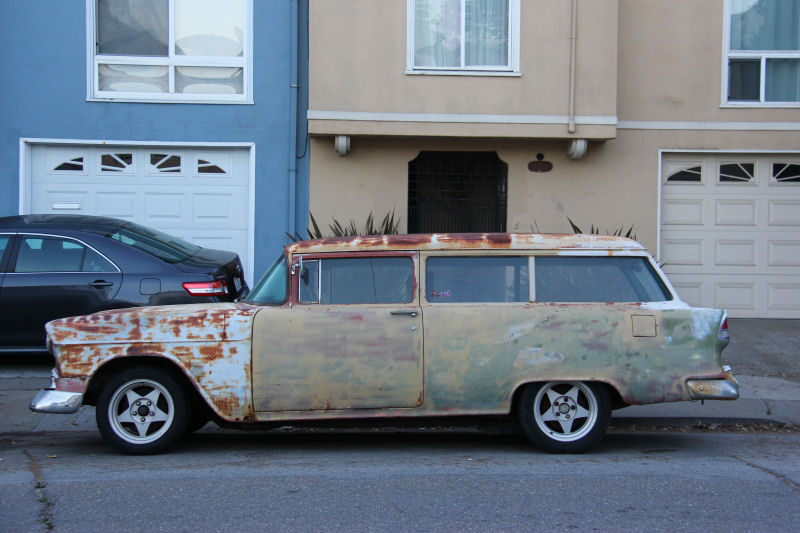 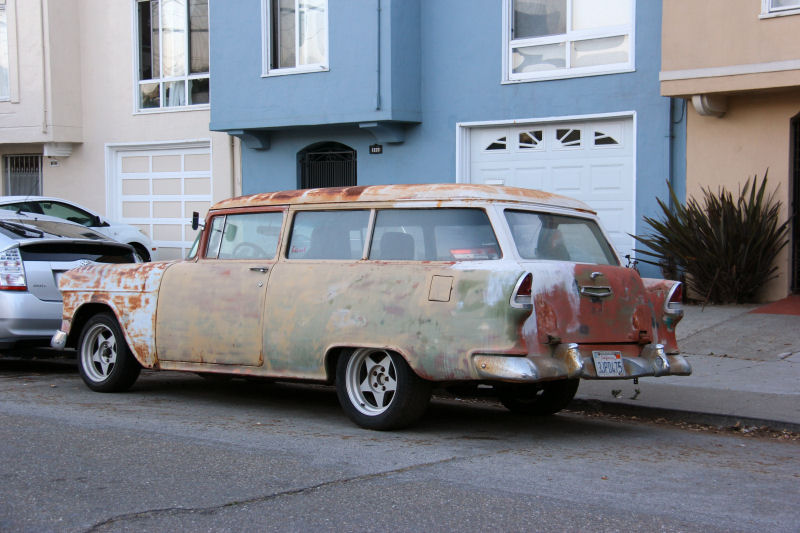 It's common for owners to mix and match trim pieces on custom '55 Chevys. This one has been almost completely debadged and I'm actually not sure whether it was a 150 or 210, as there could be mounting holes in the body for 210 side trim that were filled under all that Bondo. The green paint visible in a few places could be original. Note the license plate frame from Ed Cordero Chevrolet in Pacifica. The building at 555 Oceana Blvd in Pacifica is now a 24 Hour Fitness gym. The frame can't be original since Cordero didn't own the dealership until the late 1960s, meaning this car probably came through the place as a used vehicle when it was 15 or more years old. 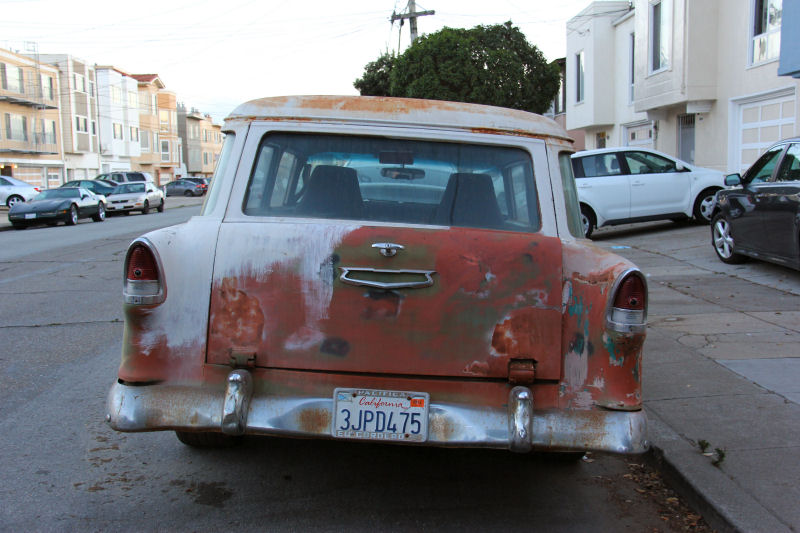 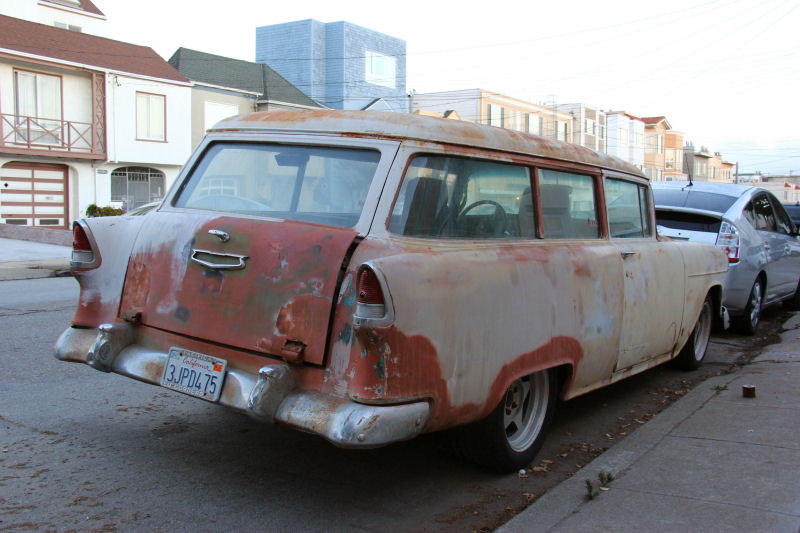 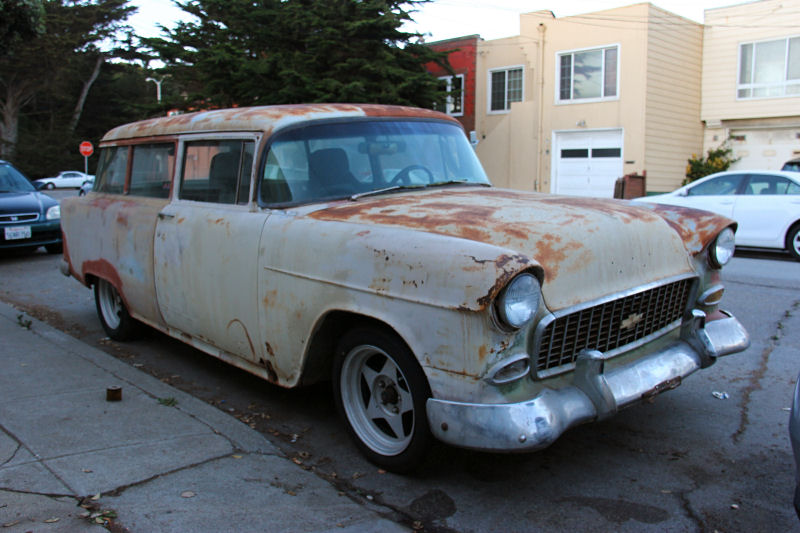 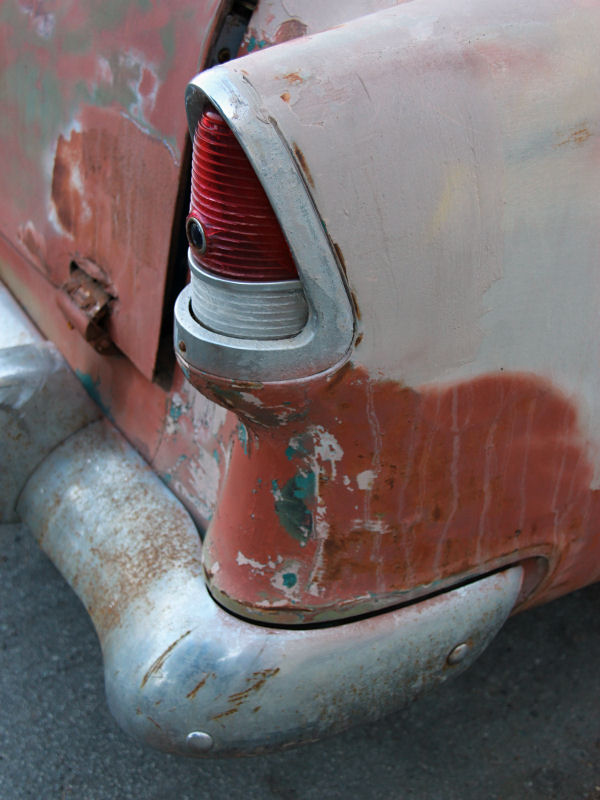 Condition on this car is admittedly rough. I trust that it's a work in progress being nursed back from the brink of oblivion. Whoever applied the Bondo and primer years ago didn't even disassemble anything, so there's paint overspray on the bumpers and Bondo smeared on the taillight bezels. The fenders and doors could use some of that Bondo right about now, as they're rusting out from the bottom up. The roof should also get some attention before it starts letting in rainwater. The tailgate doesn't shut fully, making me wonder if the metal failed around the external hinge. My inner optimist tells me to be patient. There's a black 1957 Nomad being gradually restored on the same side of town; perhaps this Handyman will get lucky, too.
Posted by Jay Wollenweber at 12:00 AM