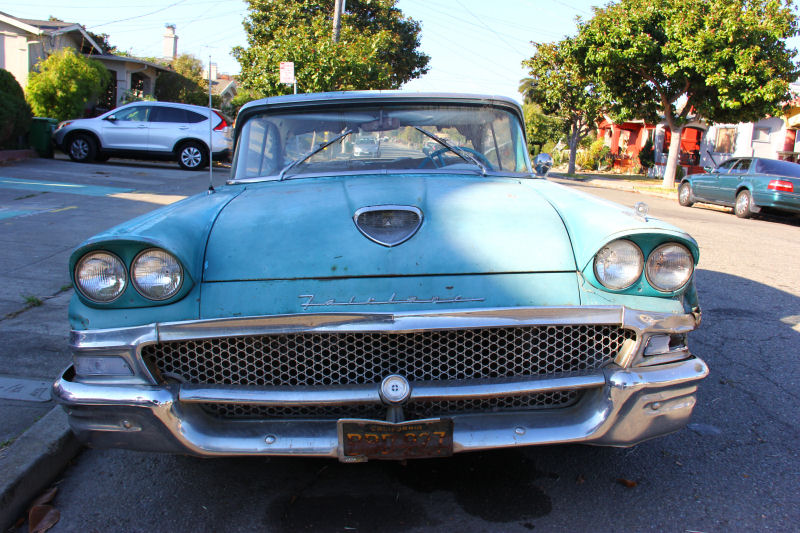 In my early days of researching for interesting local cars, I took to Flickr and found some photos of a blue 1958 Ford in San Francisco with a padlock on the driver-side door. Not since the Mr. Bean TV show had I seen a car with an actual padlock on it. I found where it was photographed but the car wasn't there. Years later I was driving through Oakland on my way back from Berkeley and there it was. It's rough, but it's a pretty cool old beast. 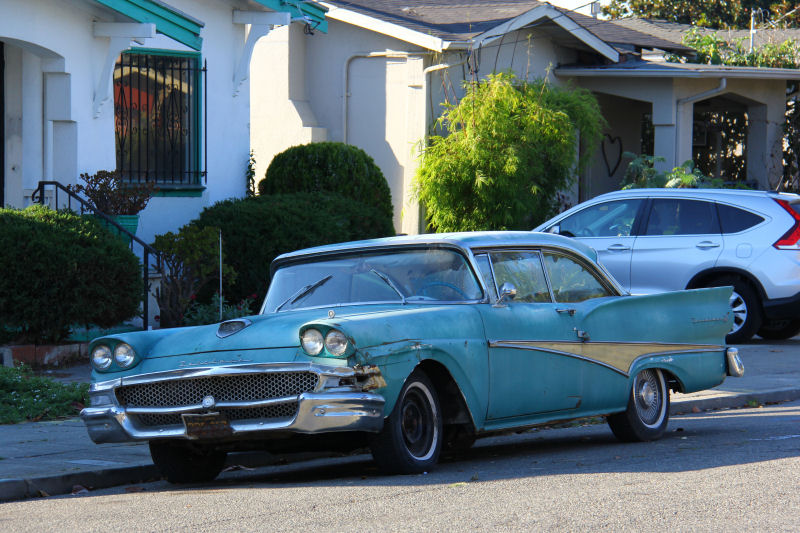 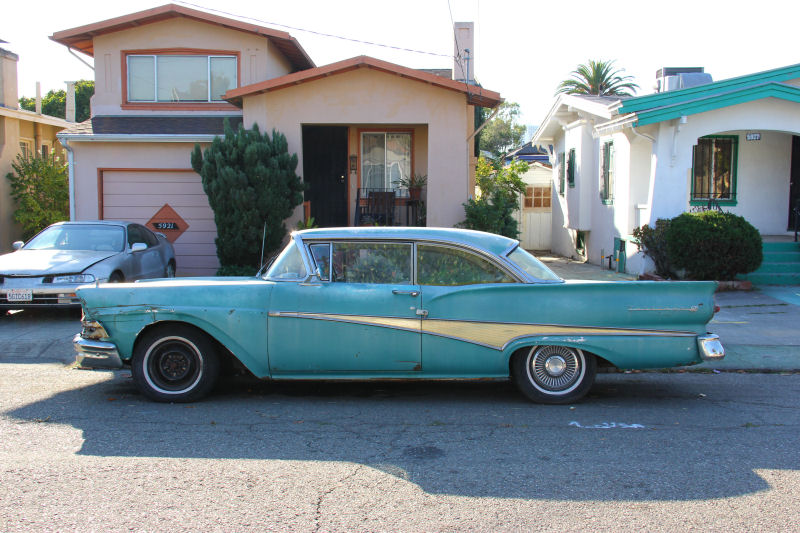 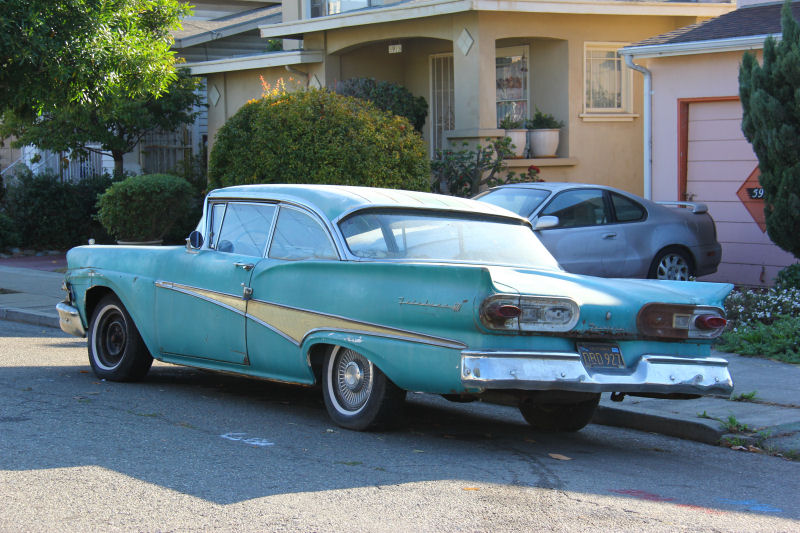 This is the first '58 Ford we've seen since the Best of the Rest post, "Circle the Wagons", which included a four-door Ranch Wagon that I would have loved to shoot more in-depth had it occurred to me at the time (summer 2007, long before I started this blog). Honestly I was never a fan of the '58s, probably because it took the attractive, all-new '57 body and changed everything I liked about it. The 1958 model year was an awkward transition for many automakers, as they struggled to adapt models designed for single headlamps, to accept four lights. A new Thunderbird was out for '58, and Ford styled their regular car lineup to resemble its front end, right down to the circular grille mesh. The '58 is notable for its oval taillamps, the first Ford since 1951 to have them. As far as I know, all '52 through '57, '59, and '61 through '63 Ford passenger cars were built with round taillights. The '60 cars received wide semi-circular lights, flat on the bottom. The body is consistent with trends of the day: lots of chrome and anodized aluminum gingerbread on the sides, tail fins and wraparound glass. The most important changes, perhaps, were bigger engines and an improved automatic transmission. 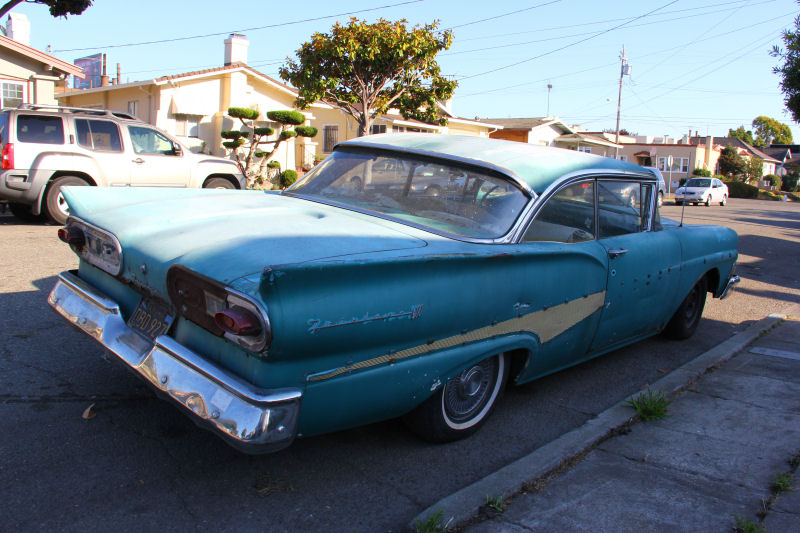 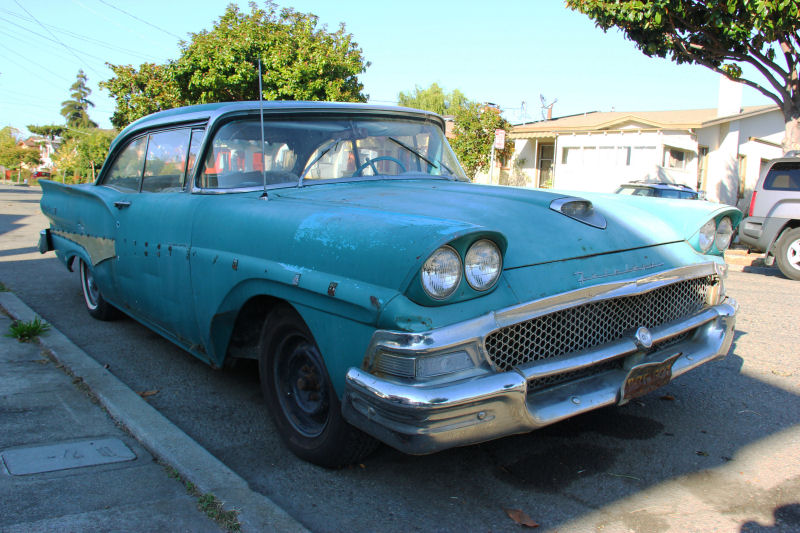 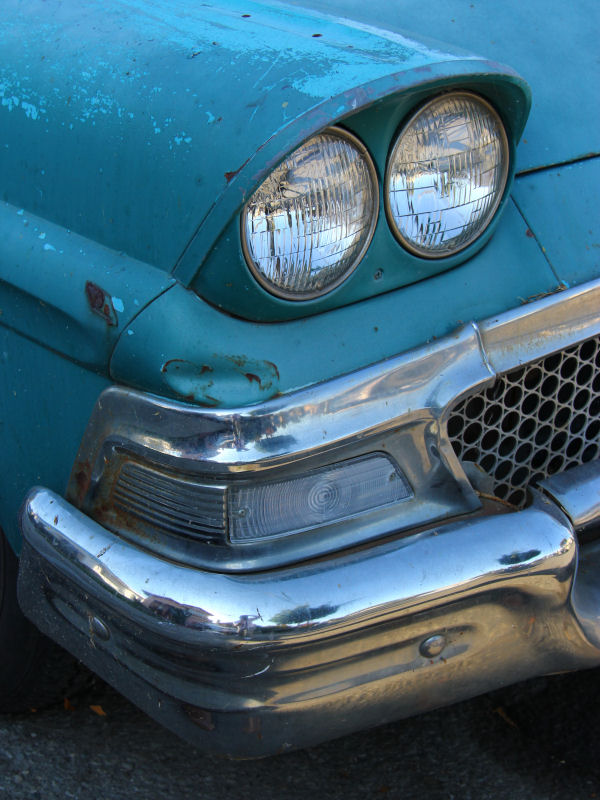 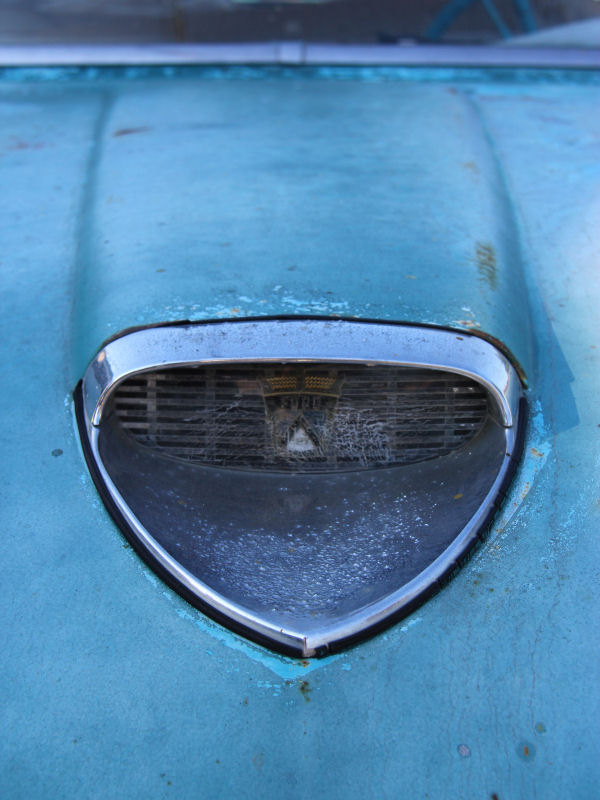 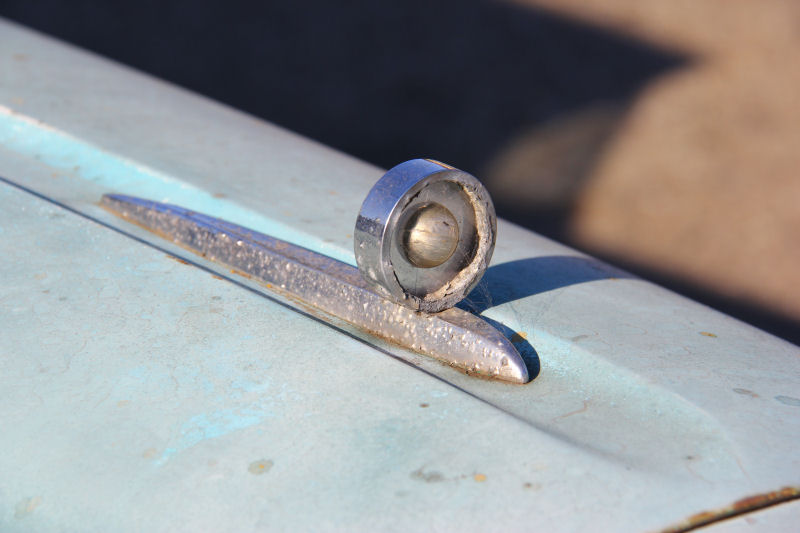 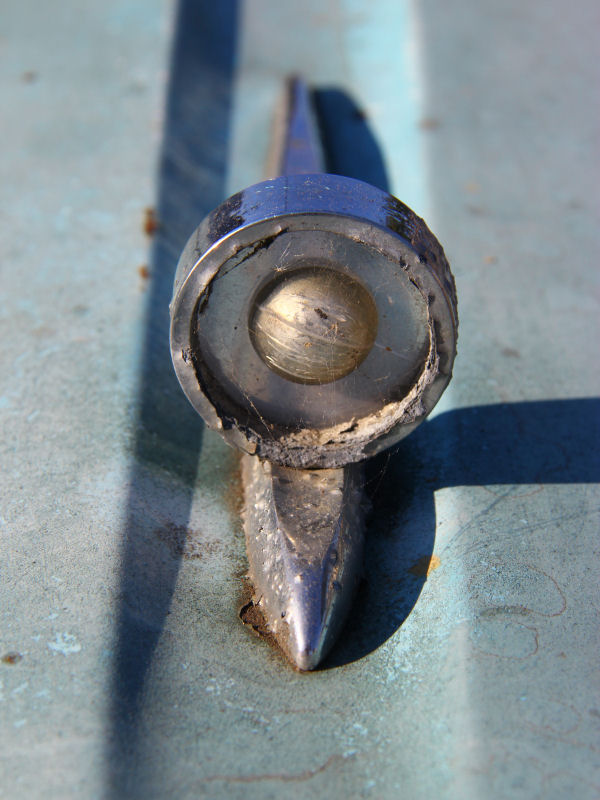 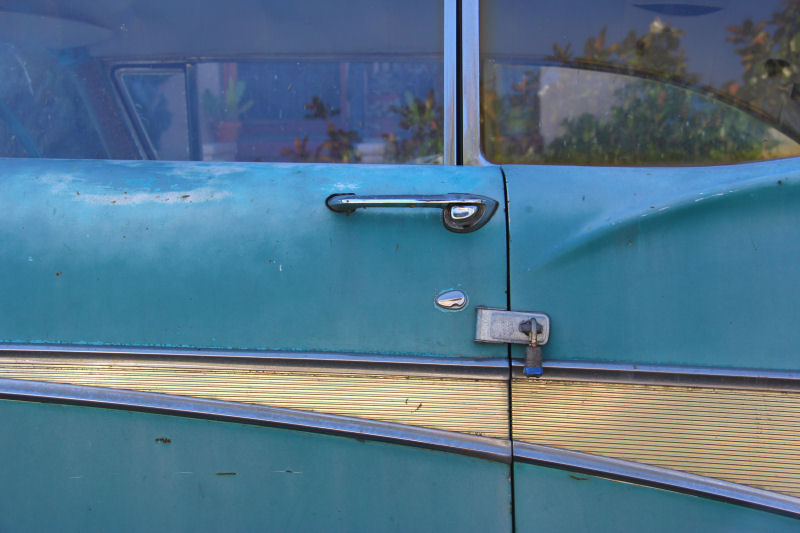 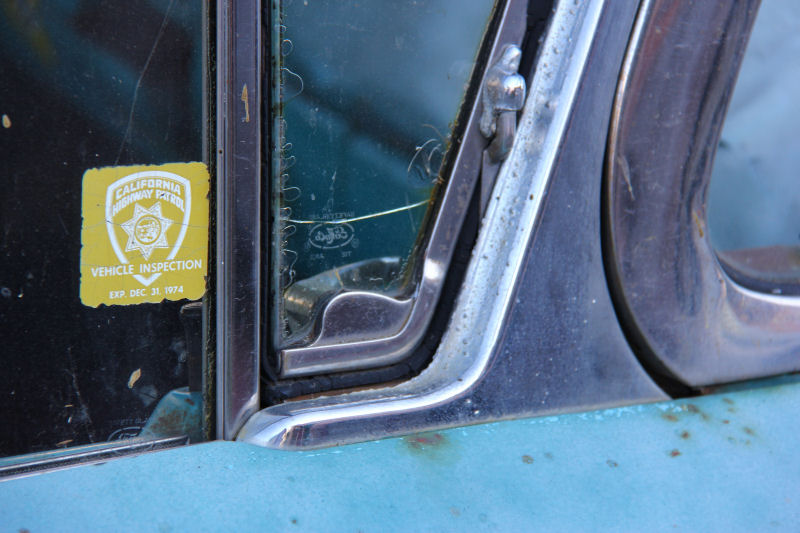 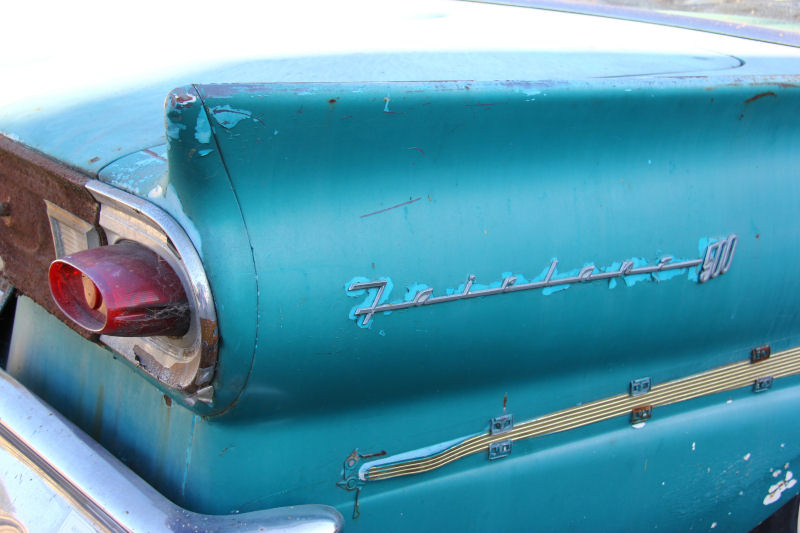 The body on this car wears two different shades of blue and neither are apparently original. There's a coat of white paint visible underneath, particularly where the side trim has been tweaked on the right quarter panel. This was a pretty nice car in its day, a top-trim Fairlane 500 Victoria hardtop coupe. Note the indented roof ribs, designed to add strength to the otherwise weak '57 hardtop style. I can't tell which engine this car has, though the single turn-down exhaust pipe suggests one of the less-aggressive powertrains available that year. Unfortunately these cars are rust-prone and this one has caught some pretty bad cancer in the trunk lid. It's not totally gone, though. This car needs love but it also has a fascinating patina and a lot of character. Things like the padlocked door and 1974 Highway Patrol vehicle inspection sticker are just too cool to get rid of.
Posted by Jay Wollenweber at 12:00 AM