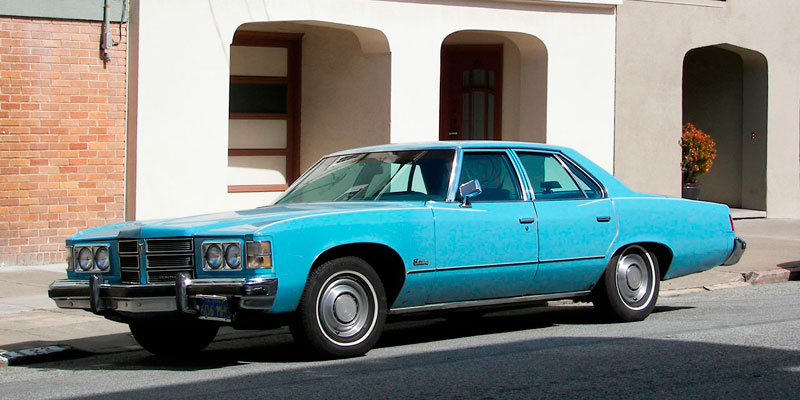 I first found this 1975 Pontiac Catalina in summer of 2007 when I was on a road trip with my friend Colin, who coincidentally operates his own blog much like this one. We had made a grand circle tour from my hometown in the East Bay to Las Vegas to Los Angeles and then to San Francisco before dropping me off back at home. En route to Golden Gate Park, we passed a baby blue full-size Pontiac parked on a street. I snapped two quick pictures of it from the car and never saw it again.
Fast forward to May 2009. I was wandering around the city with my camera as I often do when I have free time, and lo and behold, I happened upon a gigantic baby blue full-size Pontiac parked in a different part of town. I took a dozen or so pictures and went home. Turns out it was the same car. The last two years have been mostly kind to this behemoth. The paint and pinstriping are the same. The original hubcaps and license plate are still intact. The parking permit and bumper sticker are the same ones the car wore in 2007. The front turn signal reflector lenses haven't been fixed. It has some minor rust in the rockers but it appears not to spread since I last saw it. The only immediately noticeable difference is a driver mirror which has been replaced by a Cadillac unit that probably originated on a Fleetwood Brougham. 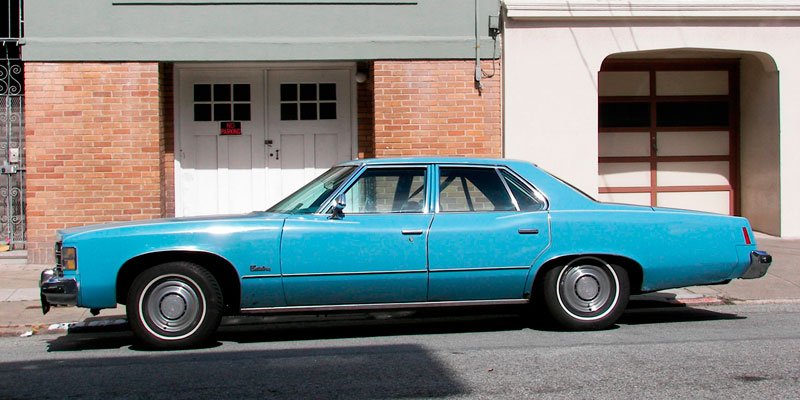 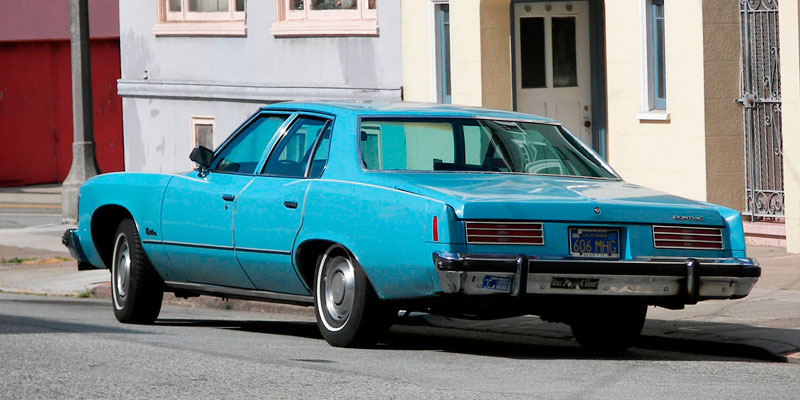 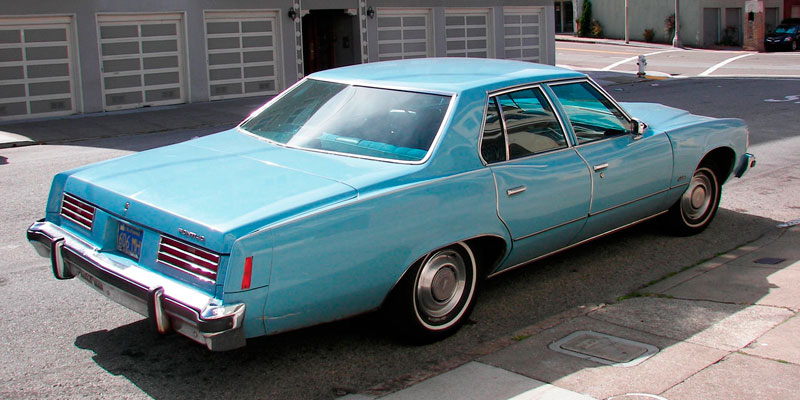 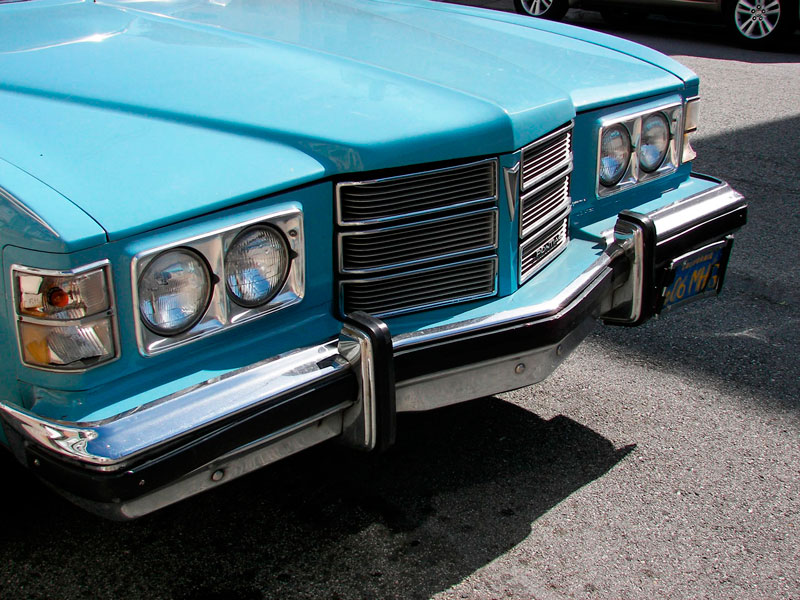 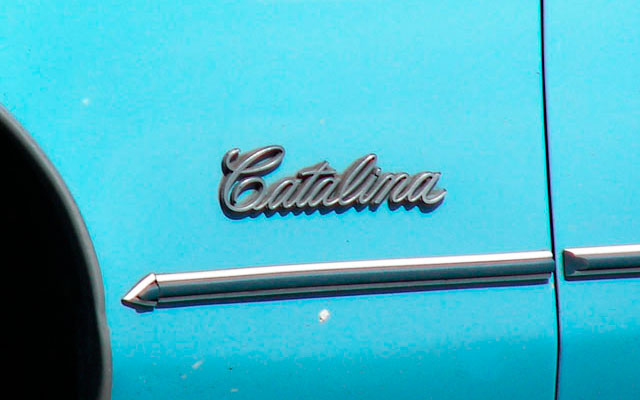 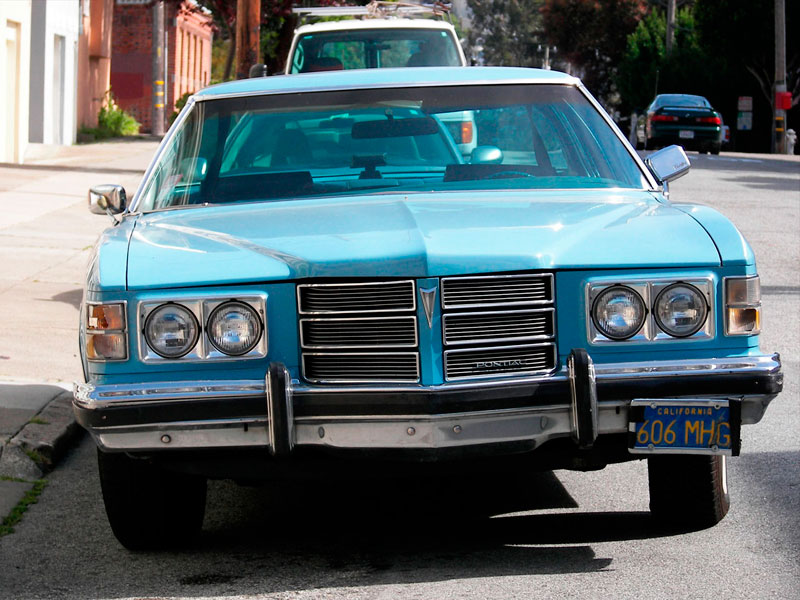 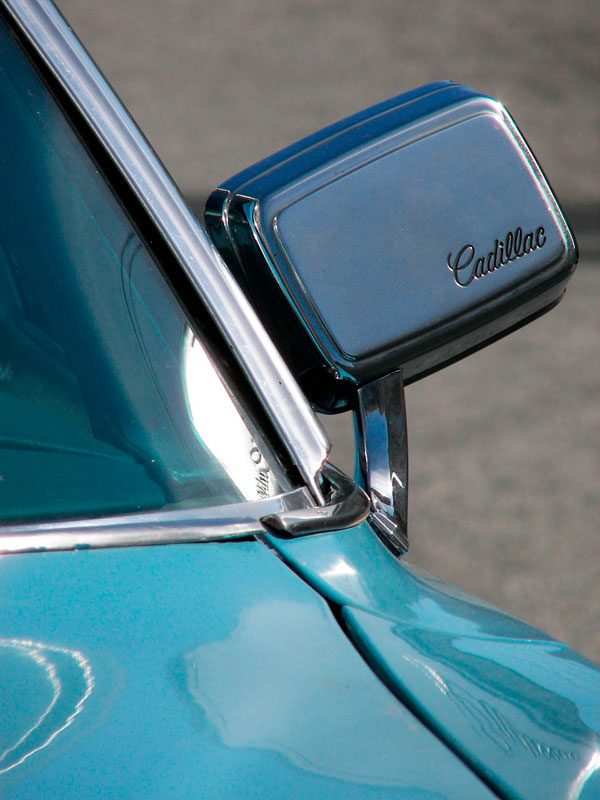 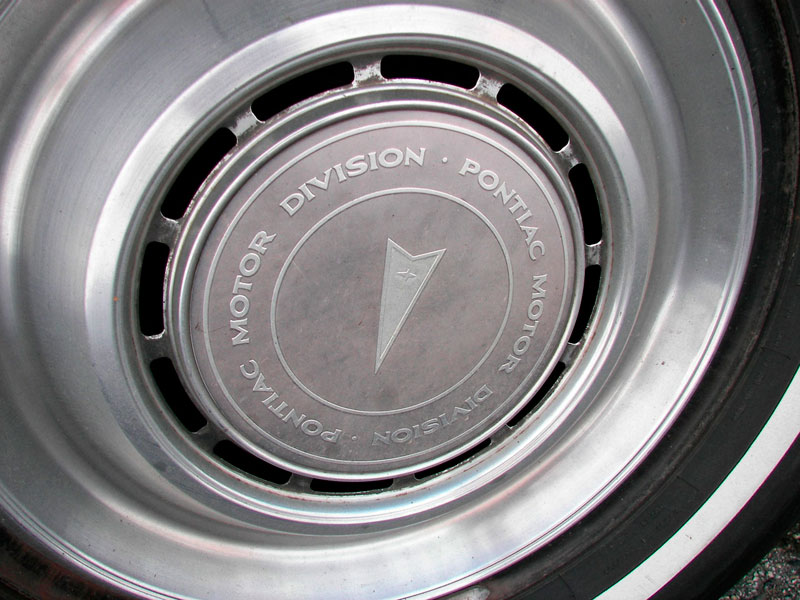 The Catalina name was introduced in 1950 as a hardtop body style for the Chieftain Eight and Deluxe Eight lines. In 1959 Catalina became its own model as a member of Pontiac's full-size line, replacing the Chieftain name. The Catalina was also sold in Canada, but as the name Catalina refers to an island off of Southern California, Canadian models were called Laurentian. In similar fashion, the higher-trim Bonneville (named for Utah's Bonneville Salt Flats) was named Parisienne in Canada.
By 1975 the Catalina was still the least-expensive full-size Pontiac on GM's corporate B-platform, slotting below the Bonneville and the luxurious Grand Ville. For those who wanted more luxury features in a budget-conscious package, a Catalina Brougham could be ordered. Standard features for 1975 included a 400 cubic inch V8 producing a rather underwhelming 170 horsepower (this was 1975, after all). Catalinas also now came standard with radial tires, electronic ignition, and catalytic converters. The full-size line received a styling facelift which eliminated the faux-Mercedes grille and wasted front-end space of 1974. It would also be the last year of round headlights on all models, as GM began its transition to rectangular lights in 1976 (round lights were still installed on base model Catalinas without the "Custom Trim Option"). The Catalina would cease to exist after 1981, having sold 3.8 million cars since 1959.
This car is extremely lucky to be a 1975 model, and therefore exempt from emissions testing in California (all vehicles older than 1975 are exempt). Pontiac V8s proved unable to pass California's new 1977 emissions standards, regulations which have only become frustratingly more stringent over the last 30 years. I can't begin to imagine how many perfectly good 1976 models have been fed to the crusher simply because they couldn't pass a smog test.

Roll on, Catalina. Run over a Prius for me.
Posted by Jay Wollenweber at 2:43 AM