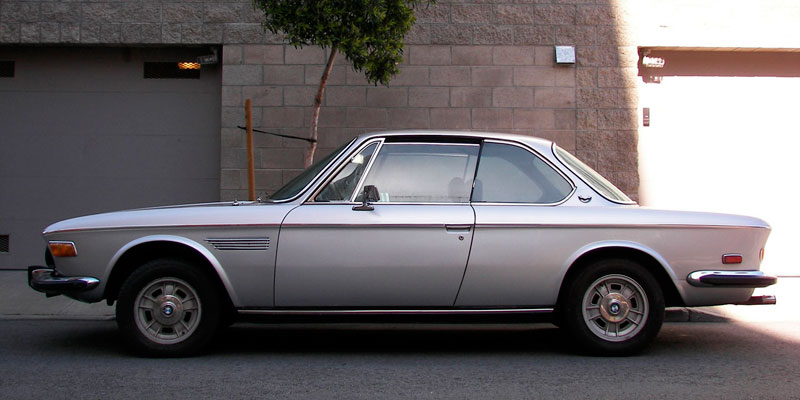 These days one expects to see BMWs everywhere. I once sat down to dinner at a window table in a restaurant in my town and counted over 40 BMWs driving by during the meal. And I think I was only counting E46-generation 3 Series models. But once upon a time, BMW was just "one of those foreign cars" and most Americans aspired to own a Cadillac if they wanted luxury. 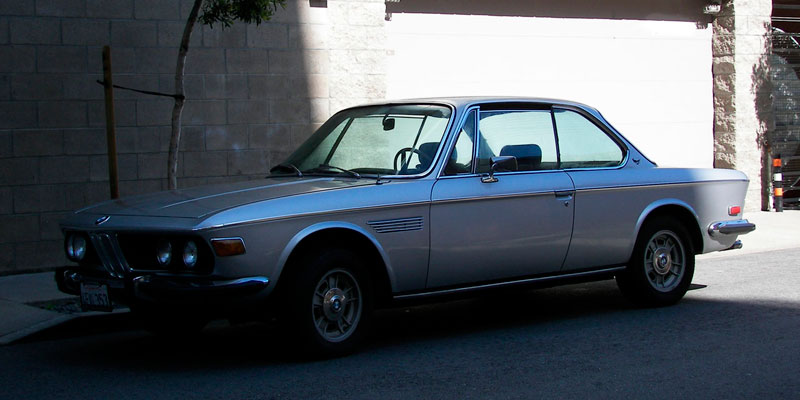 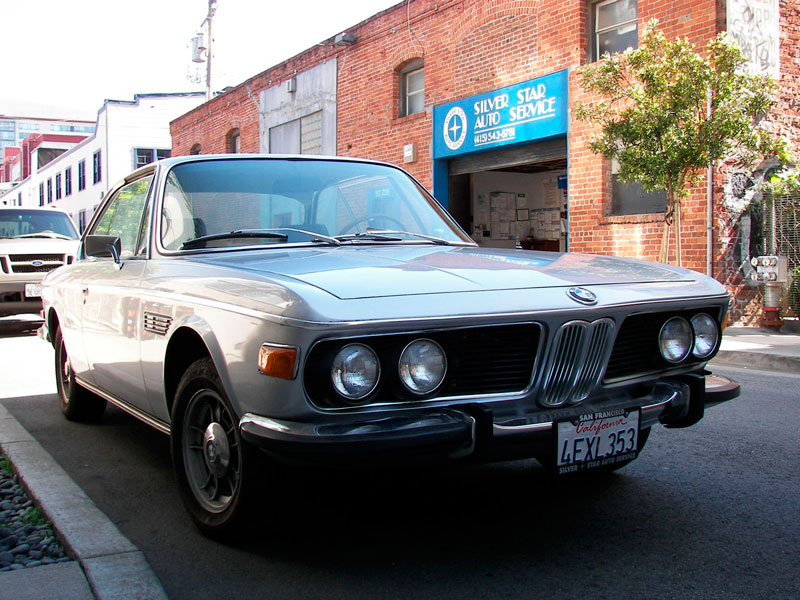 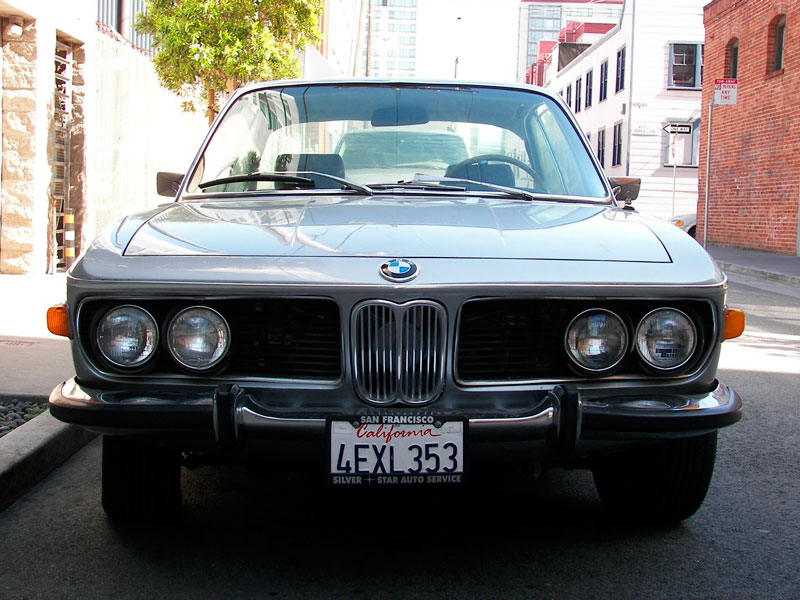 BMW started out small in the US. Literally. They got their start in their home country by selling a rebadged British Austin Seven called the BMW Dixi 3/15. After WWII, BMW rebuilt itself into a major producer of cars for Europe. It gained a niche status in the United States in the 1950s thanks to cars such as the 507 sports roadster and the silly-looking Isetta bubble car (made famous in American pop culture as the car driven by Urkel on the 1980s sitcom, "Family Matters"). BMW also built, and continues to build, motorcycles for sale around the world. Perhaps the first real mainstream hit in the US came in 1961 with the New Class series. The 1500, 1600 and 1800 sedans, 1600 coupe and later the 2002 coupe, cemented BMW's place as a producer of small, fun to drive premium cars. One interesting footnote in the New Class series was the 1965 2000C/CS, a low-slung coupe built for BMW by German coachbuilder Karmann. It was powered by a 2.0 liter four-cylinder engine. What made it interesting, aside from its unusual front end styling, was its status as a more luxurious vehicle than most other New Class models. In 1968 the 2800CS (E9) was introduced, with a more conservative front end to match the Bavaria sedan (E3) and equipped with a more powerful 2.8 liter straight six. 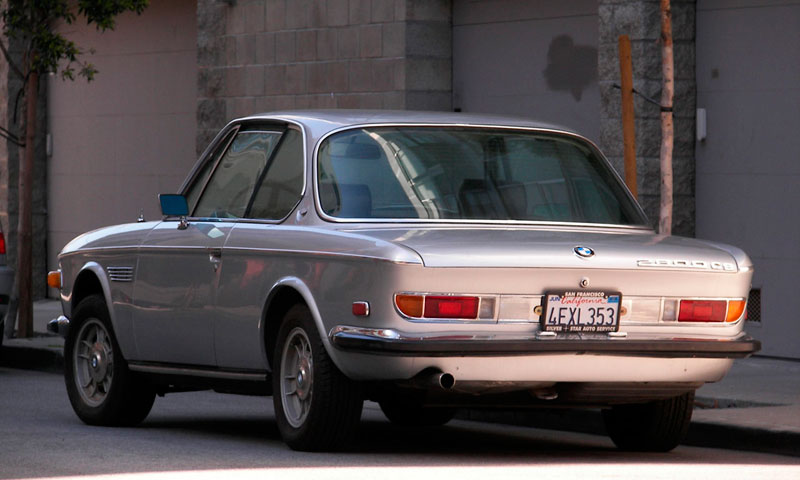 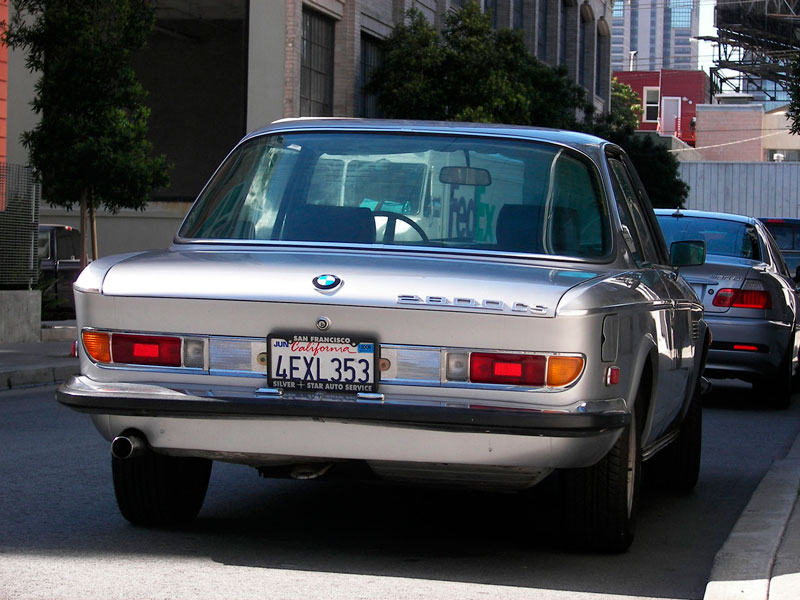 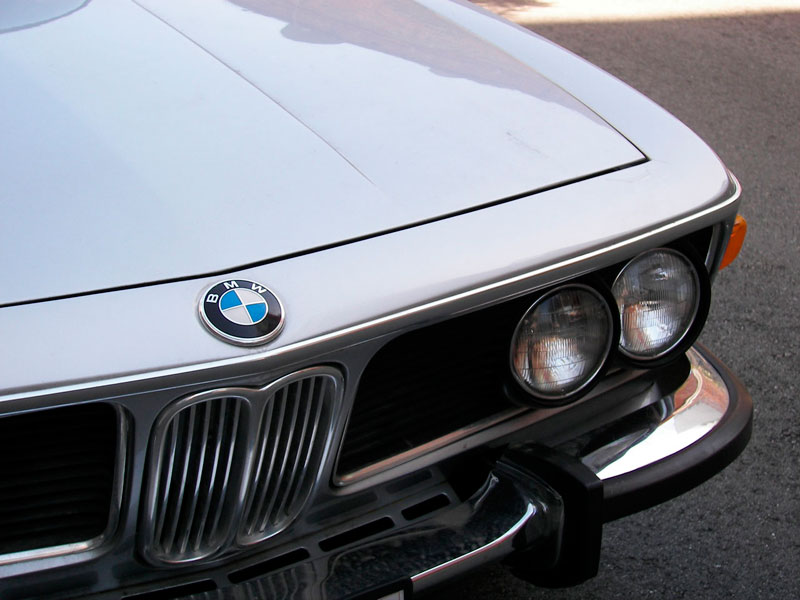 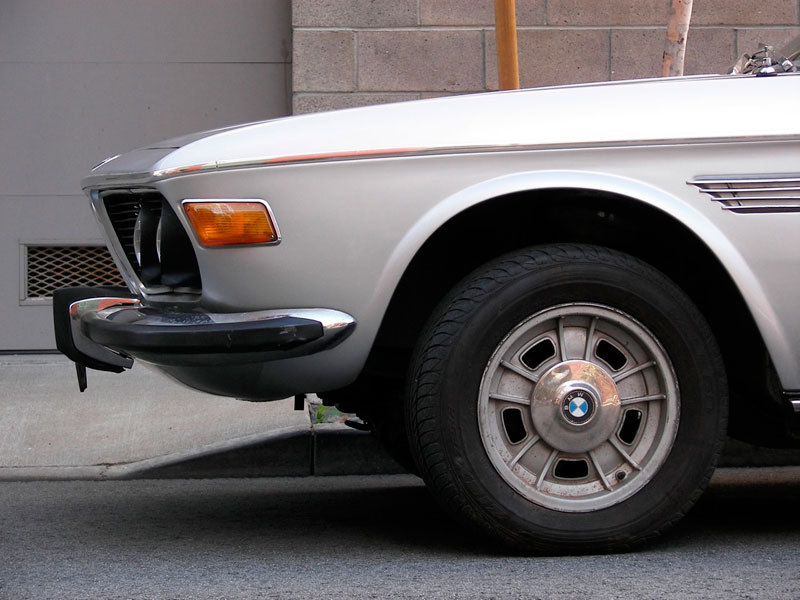 The 2800CS was the first of several models in the E9 series, which continued until 1975. Only 6,283 2800CSs were built between 1968 and 1971 (and if Wikipedia's production numbers are correct, only 641 were sold in the US). I don't know how to spot year-to-year design changes so I can't get any more specific than that. But think about that. Only 641 in the whole United States, and many are likely gone now. Of course, the 2800CS is only one of several E9 models, but it was the first one to be offered with a six-cylinder engine and classic good looks.
This CS is a beauty. She wears classic silver paint and looks pretty darn good for her age. The body is straight and free of rust or dents. The wheels appear to be original but could stand a good cleaning. I found this car outside of an auto service center on a quiet alley, where it sat awaiting attention. I've always had kind of a soft spot for these cars; I think they're very pretty. And having seen at least three or four E9s of various model designations puttering around town, I had no idea how rare they really are. It makes me very happy to see one on the street, especially since those who have them generally keep them in very good condition.
Posted by Jay Wollenweber at 3:07 AM