Today is the twelfth day of the fabled countdown to Christmas.

On the twelfth day of Christmas my archive gave to thee: 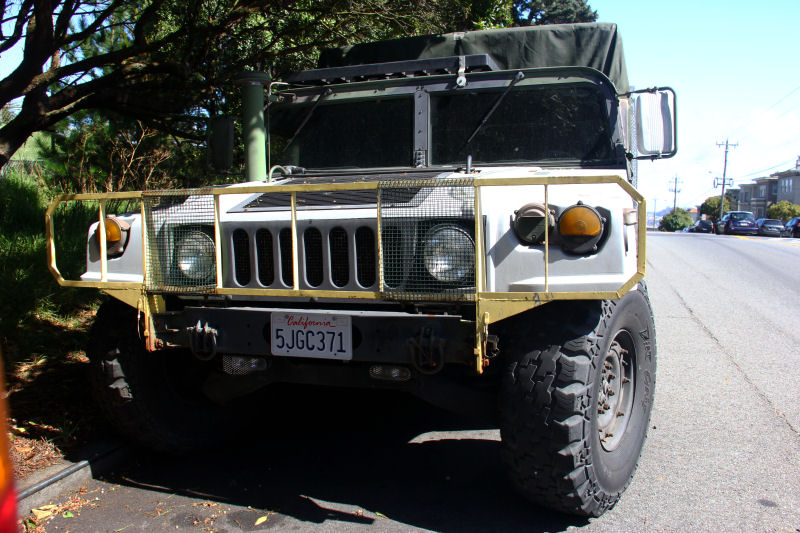 The AM General HMMWV, or Humvee, is arguably one of the most instantly recognizable vehicles in modern motoring history. They have factored in quite a few campaigns and conflicts around the world over the last thirty years. They have a following among former military personnel and some civilians and decommissioned HMMWVs have found their way into private hands through government surplus auctions. I know of a couple of them in my area, and even one of my delivery route customers owns a HMMWV that is kept in excellent condition. 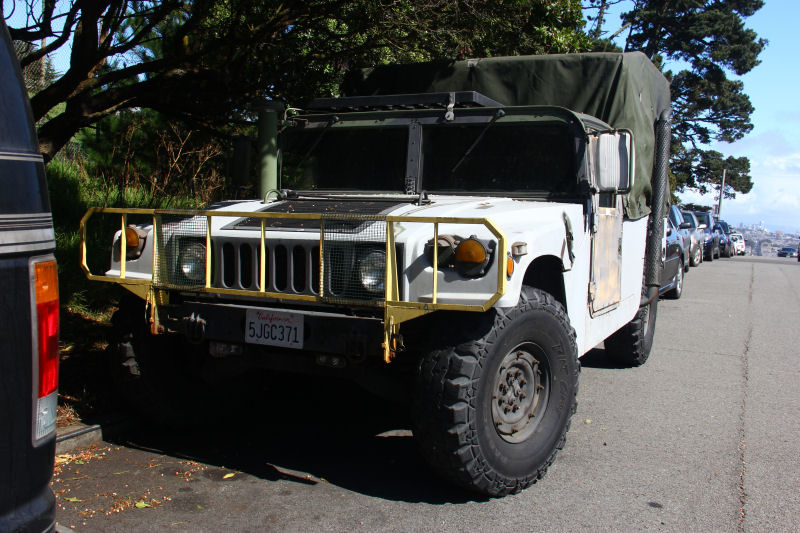 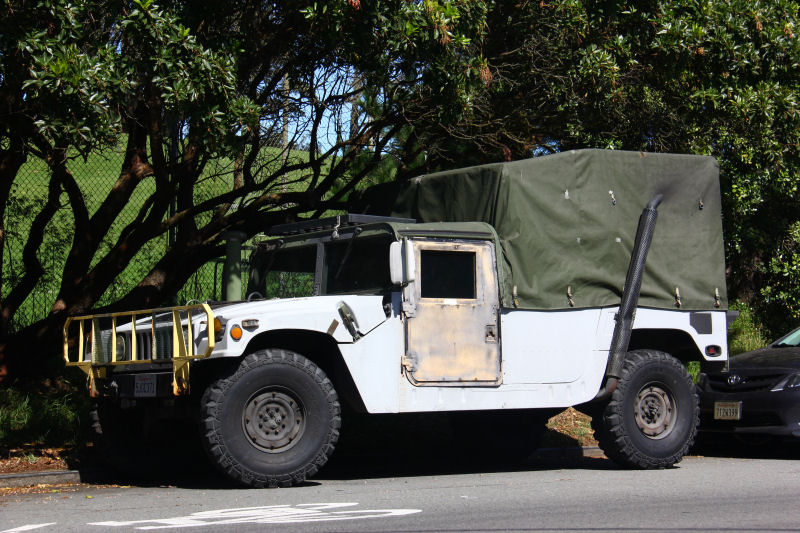 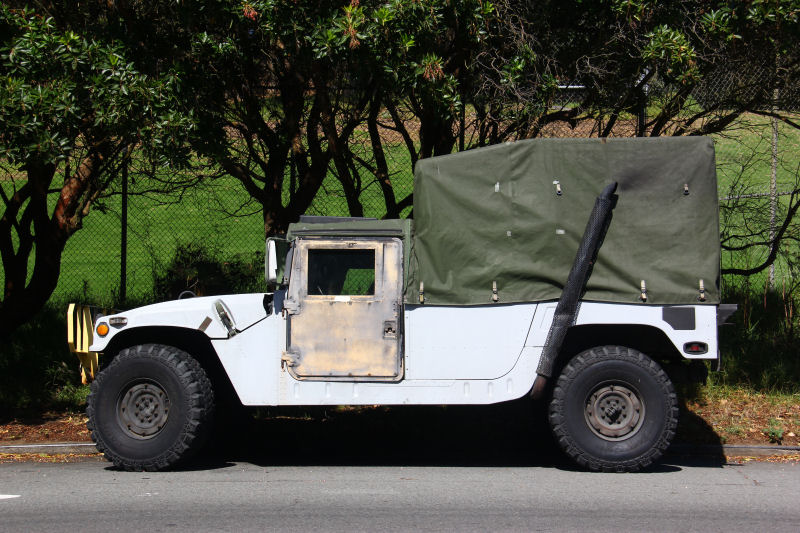 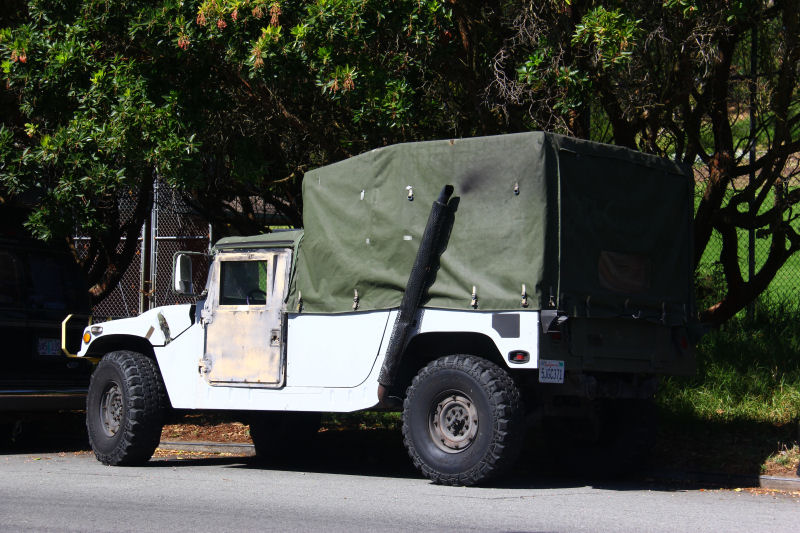 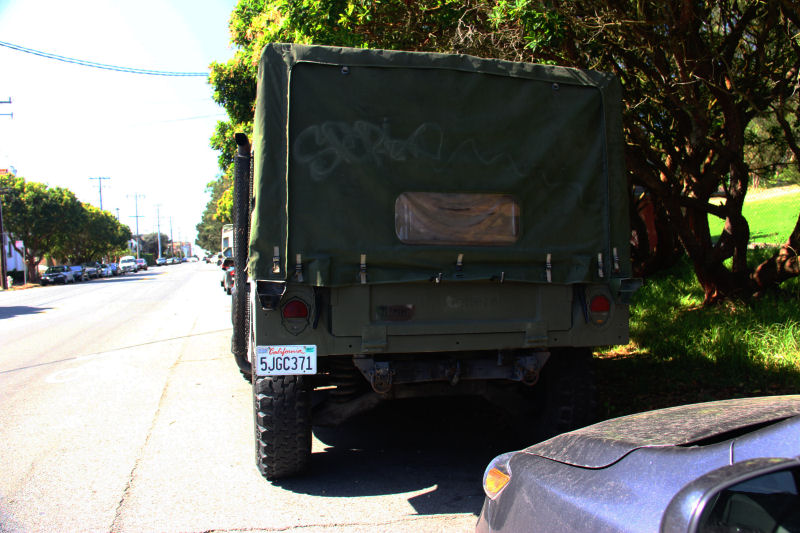 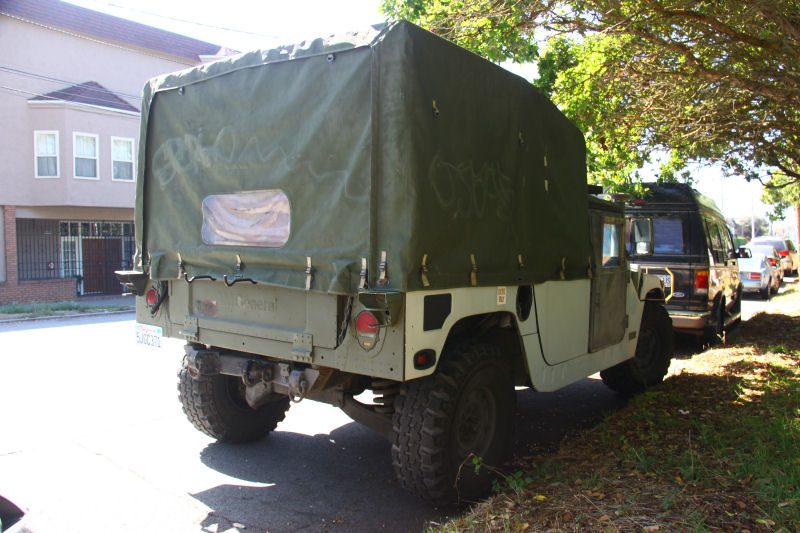 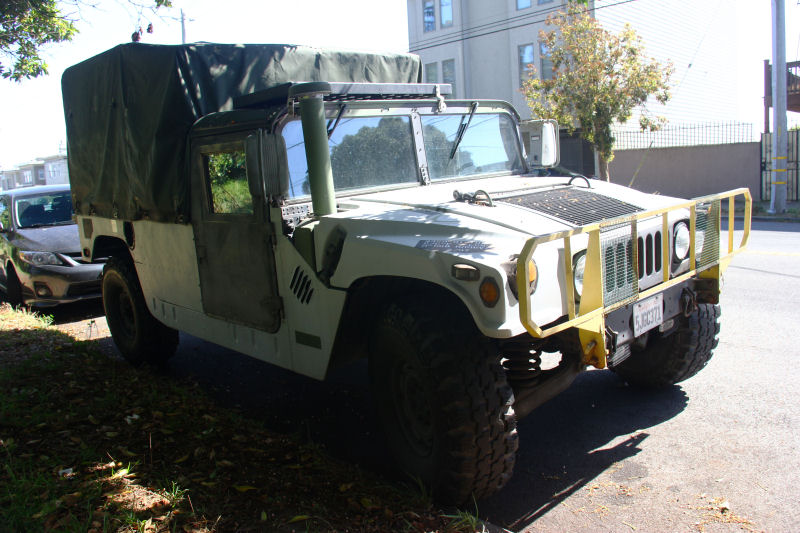 Okay, this one is definitely beyond my expertise. Even with my usual "Google-fu", I just don't know a lot about military hardware. Two years ago I contacted the owner of the other Humvee on this blog, asking if he could help ID this rig. He informed me that based on what we see in the photos, it is likely a very early production HMMWV from 1985-1987, in troop carrier configuration. It has an AM General stamped tailgate, eight-lug wheels with bias ply tires and a flat hood nose. It features an intake snorkel up front and an exhaust stack on the left side, both for fording deep water. Angled-corner front brush guard looks like a 1980s-vintage factory piece, albeit painted yellow. Body stencils indicate service with the United States Marine Corps. On the right side of the hood there is another stencil which the HMMWV enthusiast told me was likely from the Defense Reutilization and Marketing Office (DRMO), which decides whether vehicles can be surplused, reused or destroyed. Based on what I can find, some Marine logistics bases put the DRMO information on a window sticker, while others such as as MCLB Barstow out in the Mojave Desert paint it right on the hood as seen here. 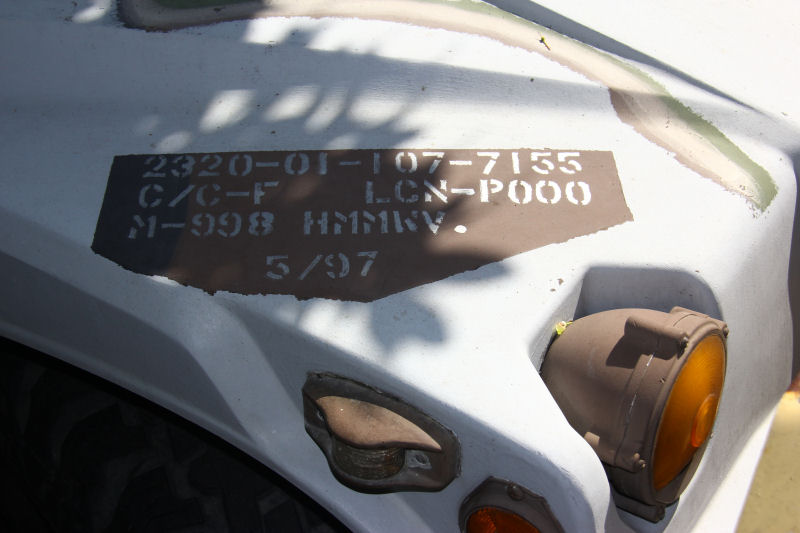 The hood stencil is apparently decoded as:


Note that the military camouflage has been painted over in flat white or olive. I don't know if this was done officially when the vehicle was sold, or by the private owner. I do find it interesting that the light-colored camo bits and all of the stencils were masked off. 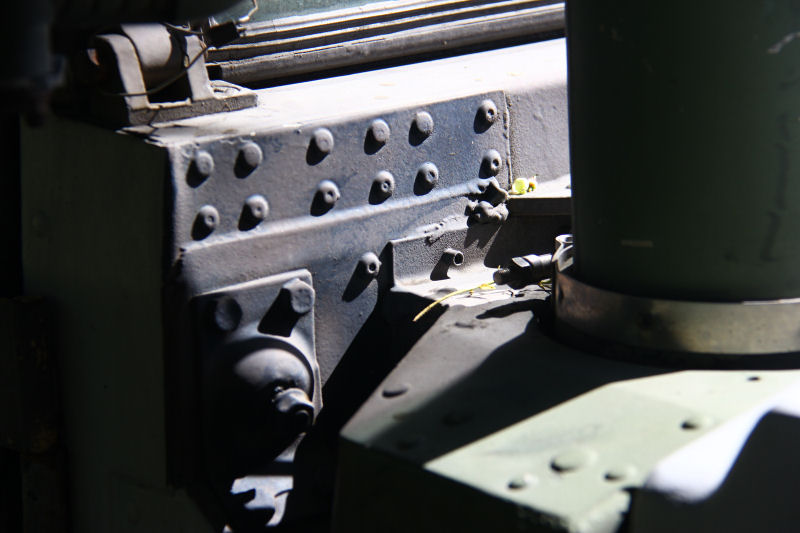 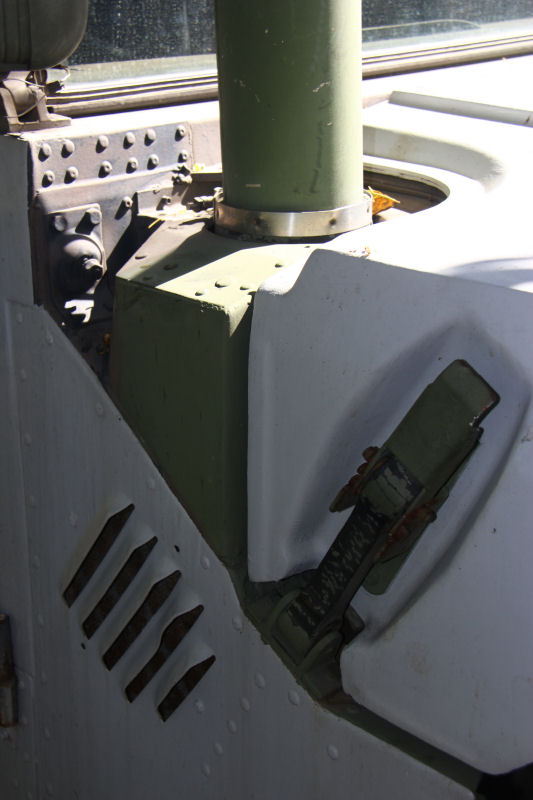 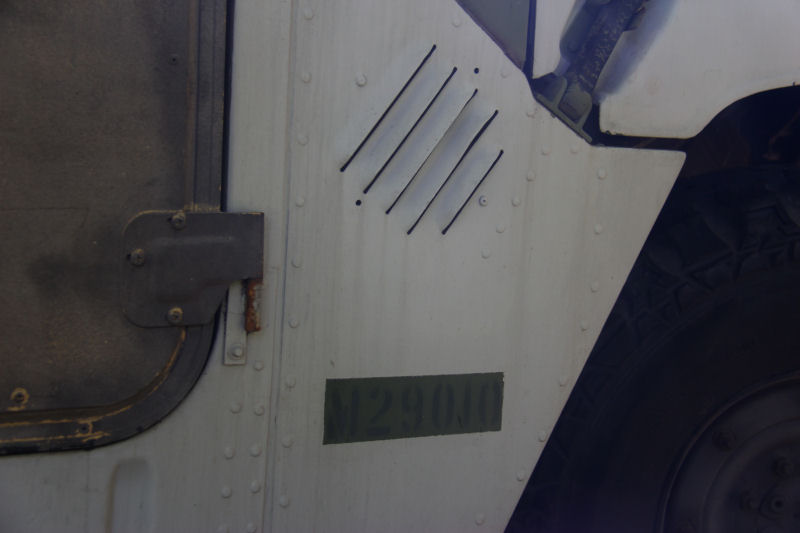 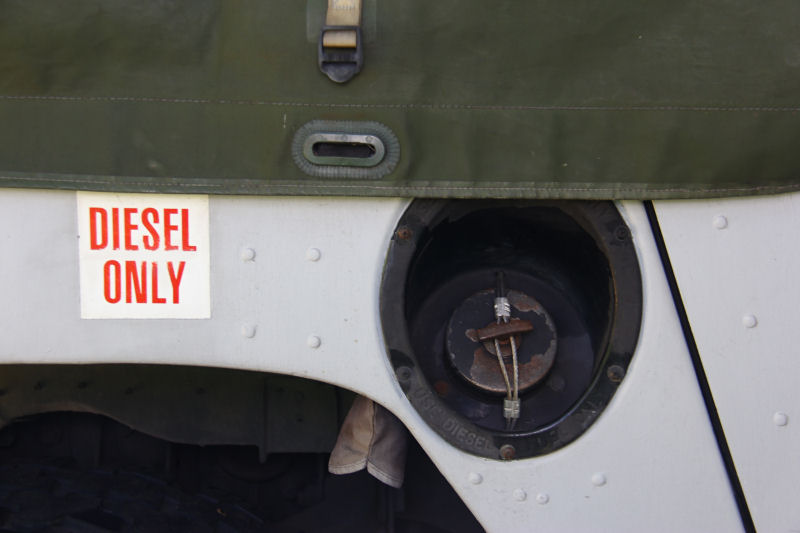 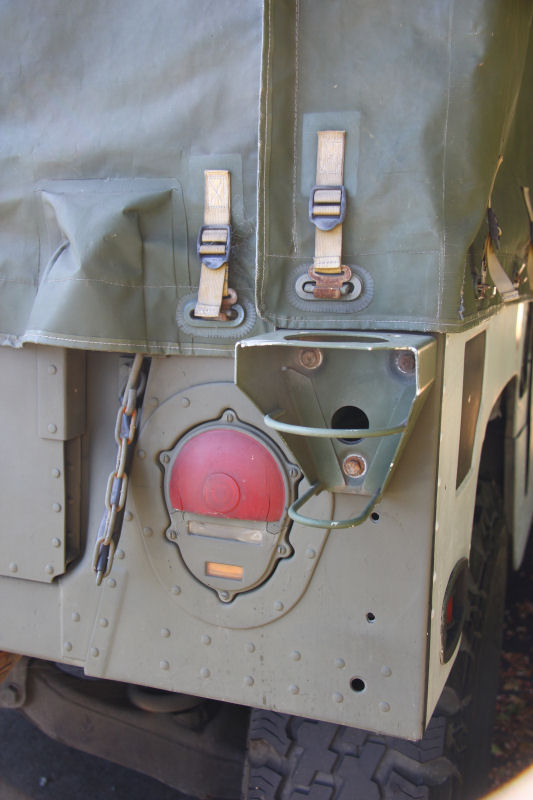 I've heard that it's not easy to get an ex-military HMMWV registered for civilian use, mainly because they are not highway-legal in original configuration. You need turn signals and backup lights, for one thing. You can see that such equipment has been installed on this example and it was successfully registered with California plates. HMMWVs have serial numbers but no 17-digit VIN like a typical road car. Fortunately it's a pre-1997 diesel and not subject to California emissions testing, but even with a government certification to obtain title, as far as I know they cannot be driven on state highways. So unless I'm misunderstanding something, this truck would have to remain on surface streets or be trailered over long distances.

I have to admit, the thought of driving such a militaristic looking truck around the hippie haven of San Francisco appeals to me somewhat...