Today marks the eleventh day of the fabled countdown to Christmas. 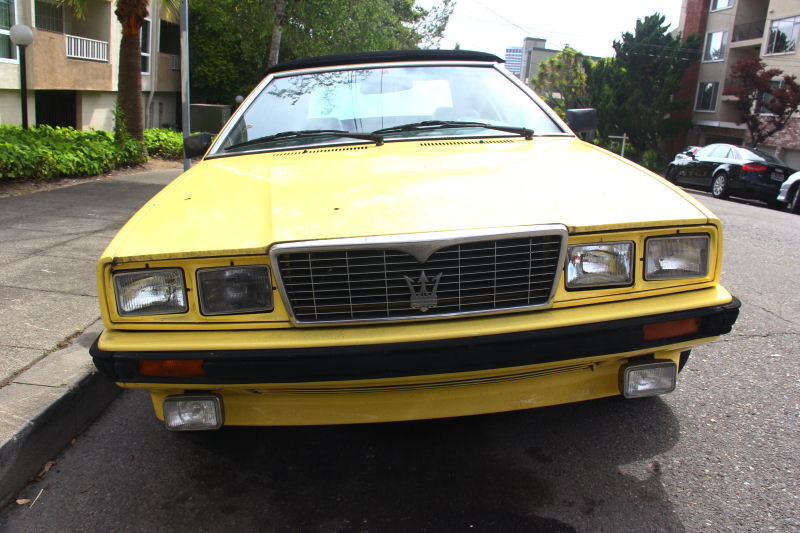 It's the mid-1980s. Ronald Reagan is in his second term as president. The economy is good and it's time to reward yourself with a new convertible. Do you do what your old man recommends and buy American? You could pick up a turbo four-cylinder Dodge 600 or a Chrysler LeBaron, perhaps a Foxbody Mustang? You wouldn't settle for a Cavalier Z24 or Sunbird GT, would you? And dear old Dad didn't survive a tour in the Pacific Theater just so you could buy a Toyota Celica GT-S. How about your European options, then? BMW E30 325i? No, half the board of directors has those. Mercedes 560SL or Jaguar XJS? No, too much gas. Porsche 911 Cabriolet? Too expensive. Corvette? How gauche. No, you need to go Italian. Enter the Maserati Biturbo Spyder. 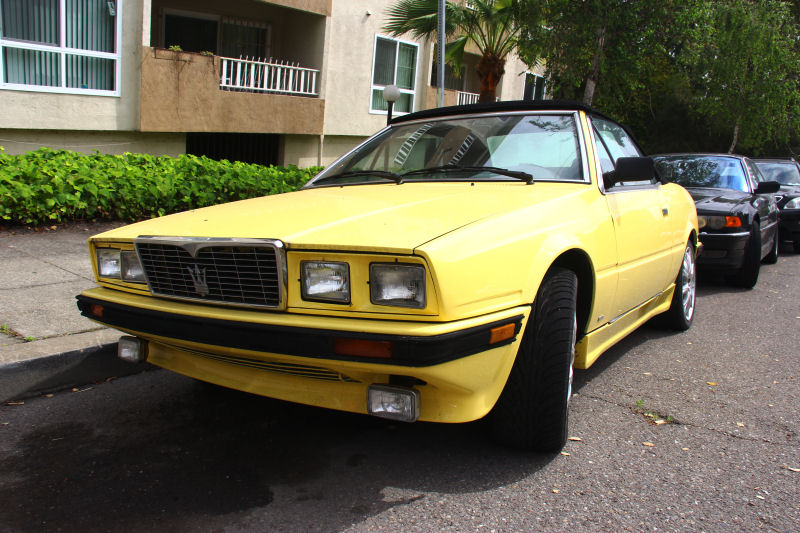 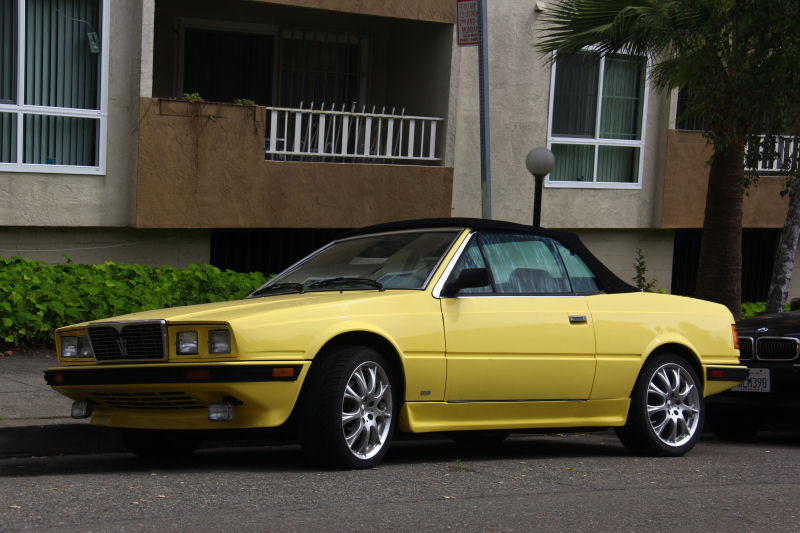 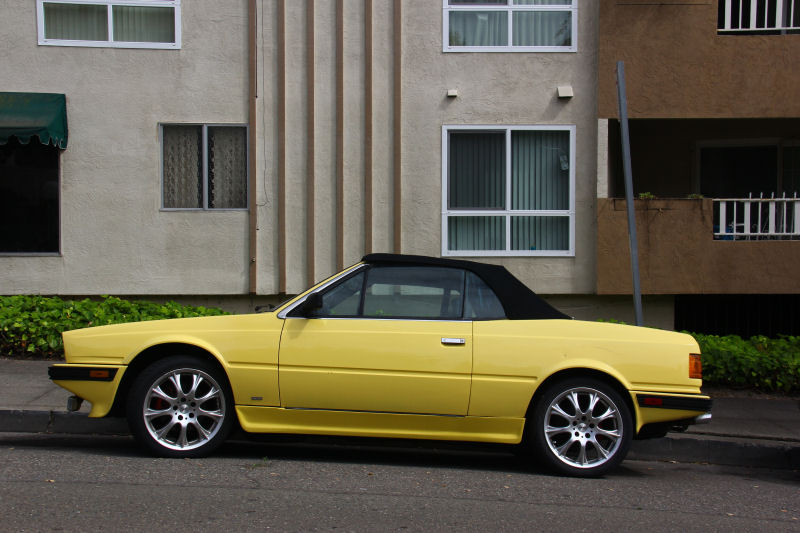 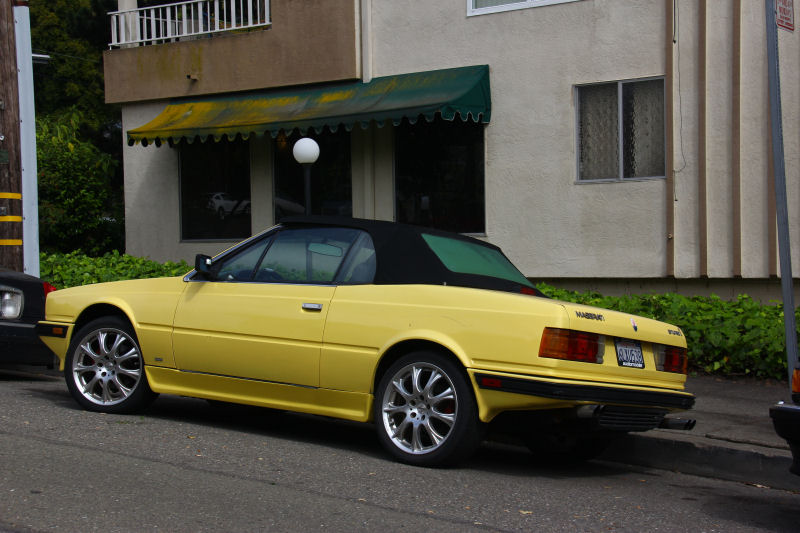 Maserati in the 1980s was a bit of a mutt car company. It had almost gone broke under Citroën ownership in the '70s, building grand tourers and mid-engine sports cars. It was rescued from liquidation by the Italian government and the de Tomaso company. New Maserati models were based on de Tomaso cars and focused on GT coupes and a new Quattroporte large luxury sedan. Even Chrysler, fresh off their own bankruptcy revival, invested in Maserati (a deal which later netted them the Chrysler TC). The 1980s brought a focus on a smaller and lower priced car with a high performance engine. The 1981 Biturbo, named for its twin turbocharger setup on its V6 engine,  sounded like a promising formula for Maserati. It was compact, nicely appointed and competitive with a BMW 3 Series on paper. The twin turbo was the first to be equipped on a production car. Compared to most contemporary cars on the road, power output around 185 horses wasn't too shabby, even with a carburetor. 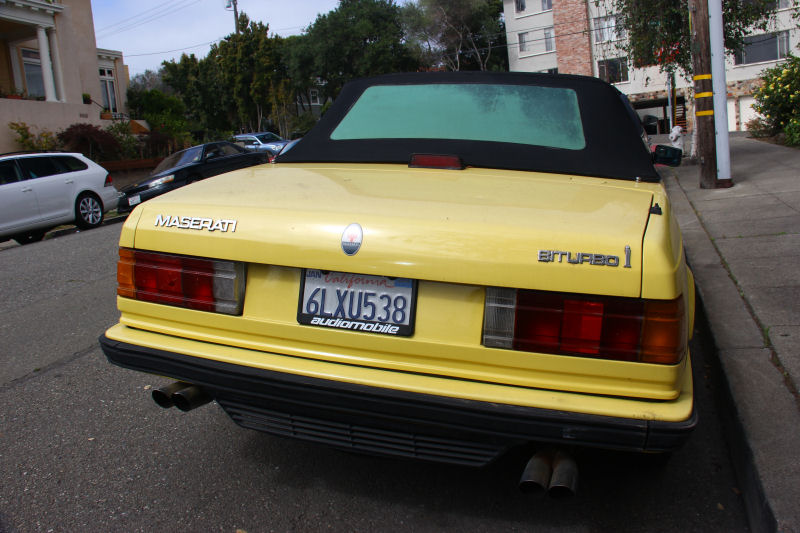 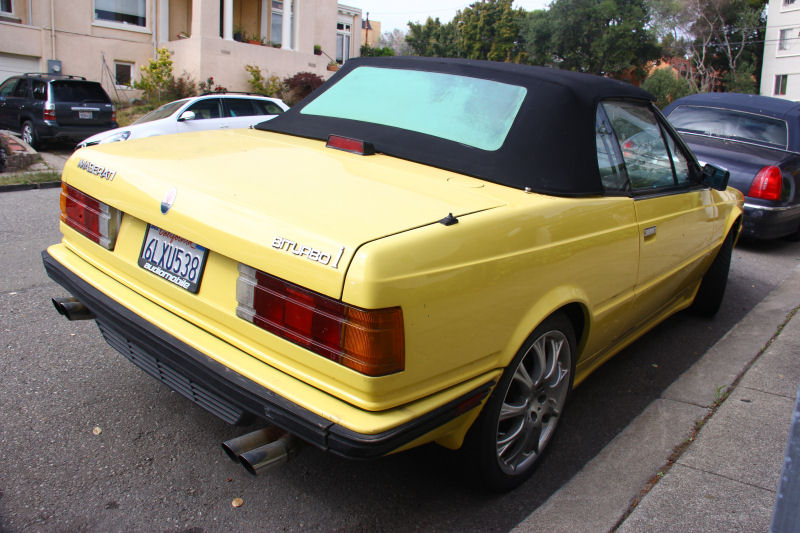 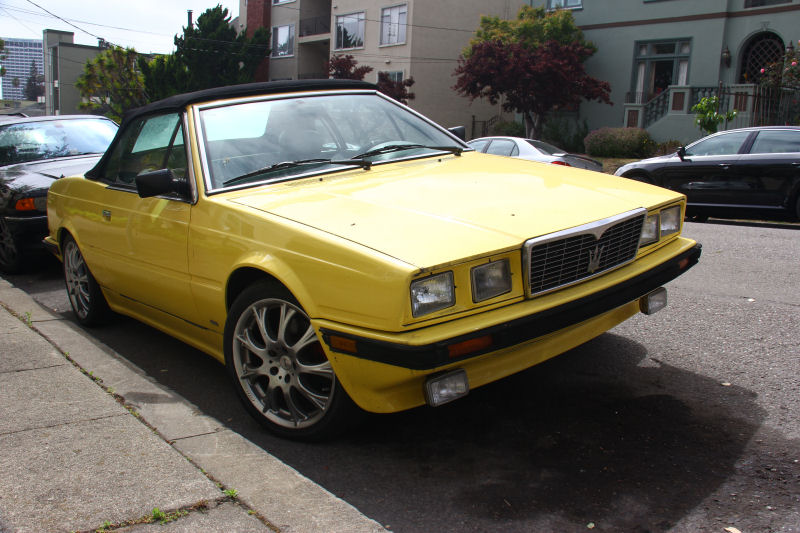 A few big changes happened during the course of Biturbo production. In 1984 a Spyder convertible version was introduced, built by coachbuilder Zagato on a shorter wheelbase with fold-down rear seats for incidental use. This gave the Biturbo a curious distinction of being offered with three different wheelbases depending on the body style (coupe, sedan or Spyder). Another notable change was the addition of fuel injection and five-lug wheels for the 1987 model. This Biturbo i Spyder is all of those things. These cars were legit quick. With the five-speed manual, even a carbureted Biturbo could hit 60 in just over 6 seconds and top out at 134 mph. That's both quicker and faster than my supercharged '99 Buick Regal GS.

So what went wrong? Early models were plagued with mechanical and build quality problems with materials inside and out. Belt and seal failures were common and the cars required careful and thorough maintenance. Many of these problems were ironed out after a couple of years, but the damage had been done. The car's reputation was already tarnished and it was pulled from the market after 1990, when Maserati gave up trying to move remaining unsold dealer stock. Italy and the rest of Europe got some special editions with higher technology and performance that we didn't get here. The Biturbo lasted until 1994 in Europe in some form or another, with over 38,000 made in all. America only got about 5,000 of them. I've only seen a few in the past decade; a brown coupe with light body damage, a black coupe at a local Cars & Coffee, and this yellow Spyder.

This example is curious. When I found it on the street I naturally assumed that the yellow color was a repaint, but it could well be factory stock. I have seen photos of yellow Biturbo Spyders, and Biturbo Spyders with body color headlamp bezels. But I could find none with all of those things plus five-lug wheels. It could be a conversion, or an early '88 model. I'm not sure. The Momo M1 wheels aren't stock. They seem like a bit much for the car visually, but I'm sure it handles better than the original 14-inch phone dials (or 15s, on 5-lug cars). In any case, a Biturbo Spyder is a very rare car. If it's a regular Spyder i with the 2.0 liter engine, it's one of 297 made. If it's a Spyder i 2500 with the 2.5 liter engine, it's one of 122. 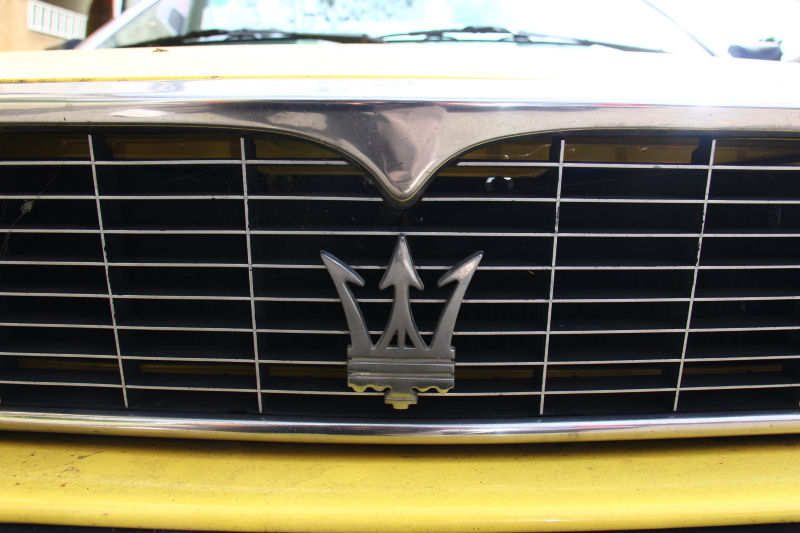 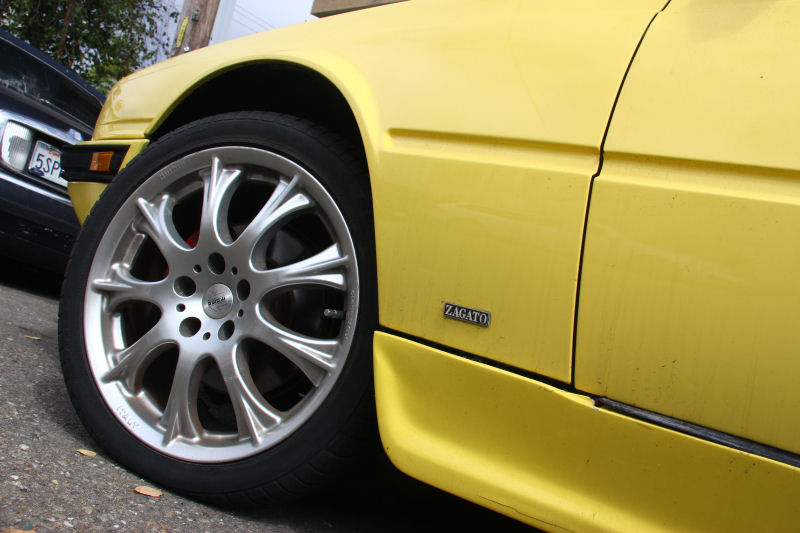 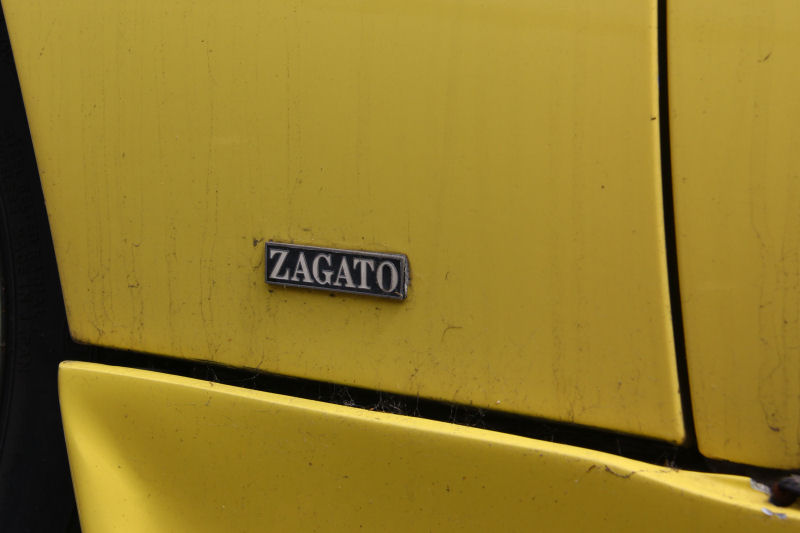 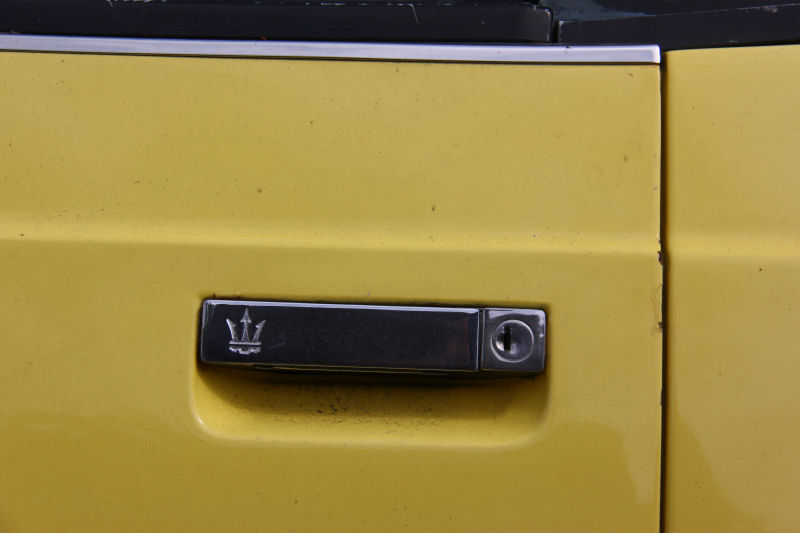 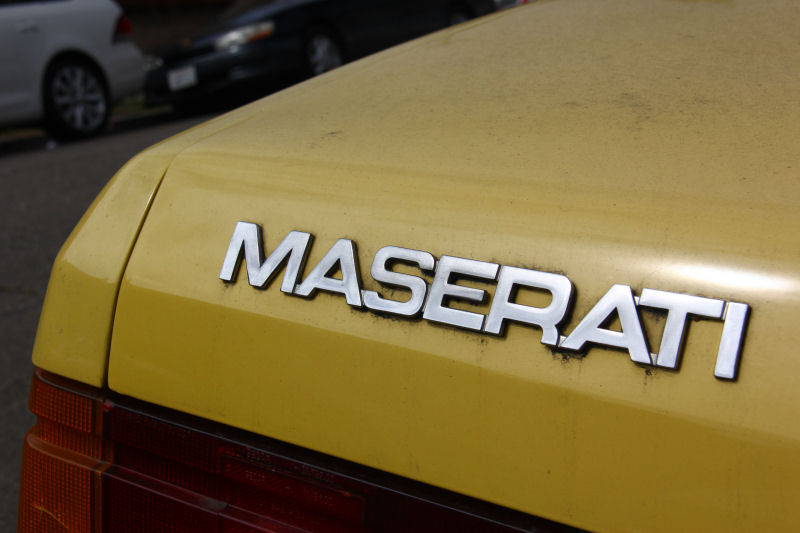 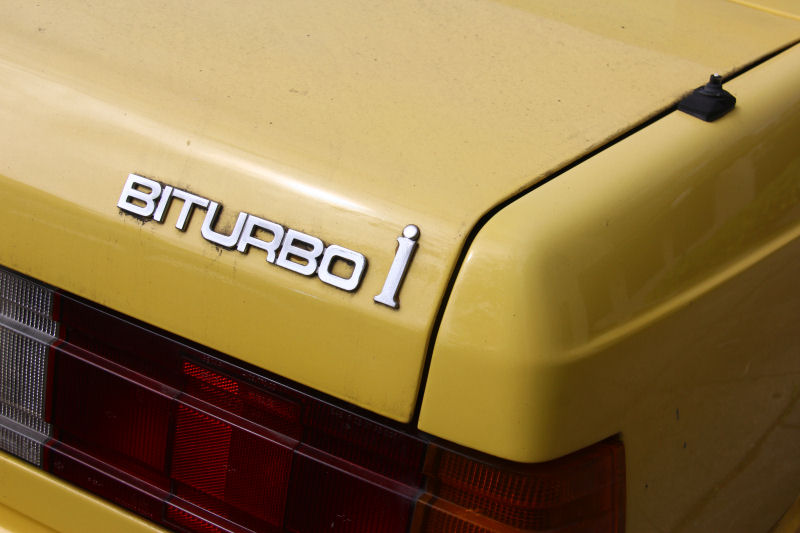 The funny thing in all of this is that while the Biturbo in general is regarded today as a terrible car, later models like this one are actually not that bad. They were built to a higher standard with more premium materials and more reliable parts. The irony to me is that back then, Maserati tried to build a mass-market luxury car and failed, relatively speaking. But now they do the same thing with the Biturbo's spiritual successor, the Ghibli sedan. The Ghibli also has a twin-turbo V6, occupies roughly the same market segment and sells for just slightly more than this Biturbo did (when adjusted for inflation). I see a fair number of Ghiblis around my area. Maserati has finally gone mainstream, but we still have oddball creations like the Biturbo Spyder to remind us of how far they've come.