Today marks the sixth day of the fabled countdown to Christmas.

On the sixth day of Christmas my archive gave to thee:
Suede Studebaker,
Fine Nomad bling,
Ford Thunderbird,
Beige French shed,
Tuned Chevy LUV,
and a Park Lane down on the street. 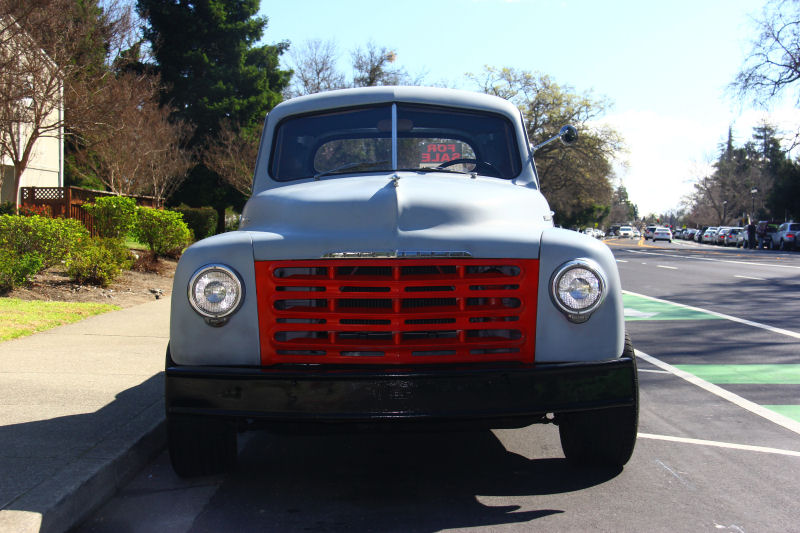 Lately there's been a rash of Studebaker trucks popping up around here. Okay, that's overstating things slightly, but I know of at least three. One of those is a restored mid 1950s one that I see driving rather often. Then there's this 1949 example that I've seen a number of times, marketed by a gentleman with an assortment of classic pickup trucks that all seem to be for sale. You'll see several of them on California Streets in time. 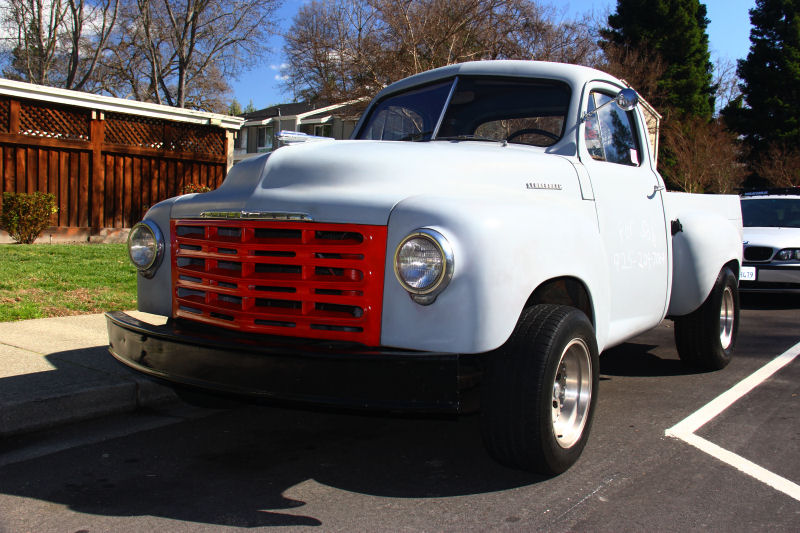 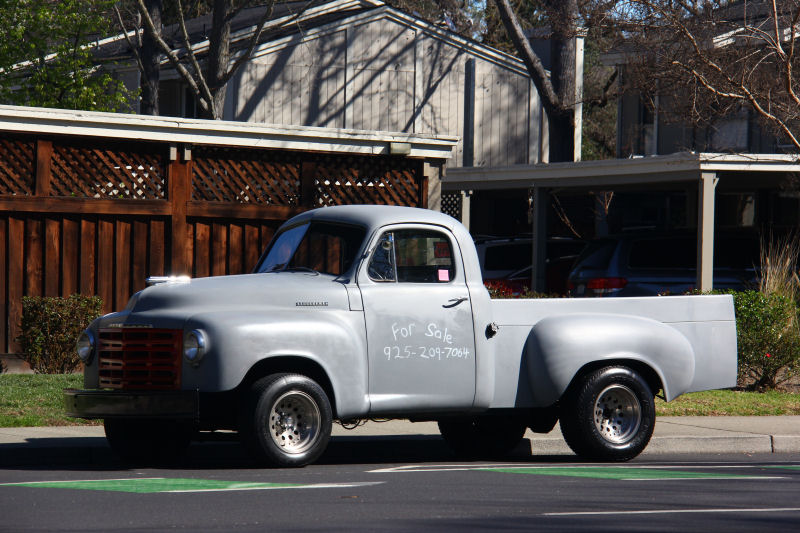 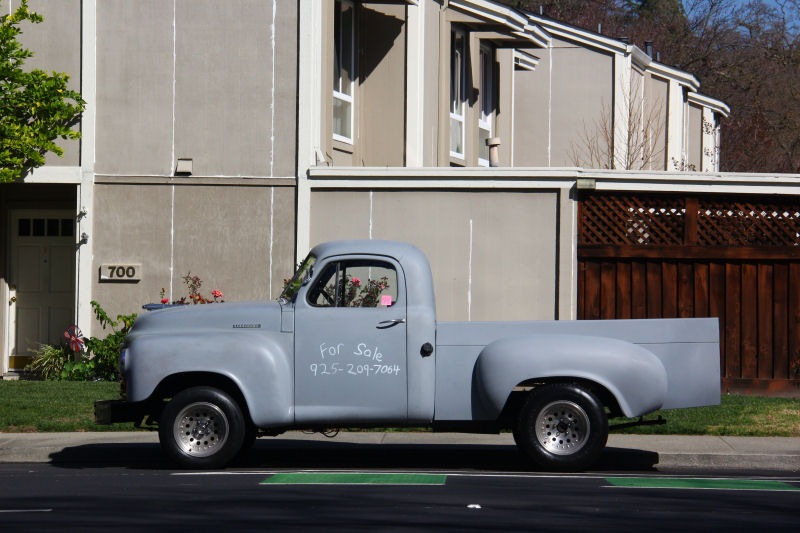 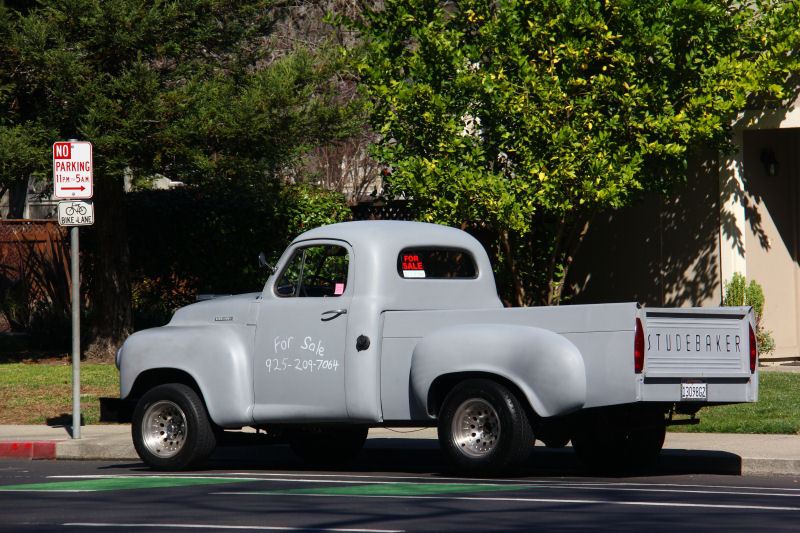 The 1949 Studebaker pickup was an all-new vehicle. The outgoing M-Series truck had a prewar look as did virtually all vehicles of the postwar era, with a tapered hood, pontoon fenders and a tall grille that resembled a giant mustache. The new truck retained the 169 cubic inch Econ-o-miser flathead six engine that dated back to 1939, but it was a lightweight and efficient unit that produced a solid 85 horsepower. In comparison, a 1949 Chevy truck with the 216 Stovebolt six made 90 horses and the 1949 Ford pickup 226 flathead six was good for 95. Of course, Ford had a flathead V8 available at the time that gave a whopping 100. Studebaker would offer their own larger "Hy-Mileage" six the following year that would pump out 102 ponies. These power figures seem laughably low now, but given how much lighter these trucks were than their modern counterparts, it was perfectly fine in most cases. And even in 1949, a Studebaker truck was much lighter than its competition. A new aluminum-bodied Ford F-150 has a curb weight just over two tons and a midsize Ranger or Toyota Tacoma weigh just under two tons. The '49 Studebaker 2R5 had a road weight of under 3,000 lbs. 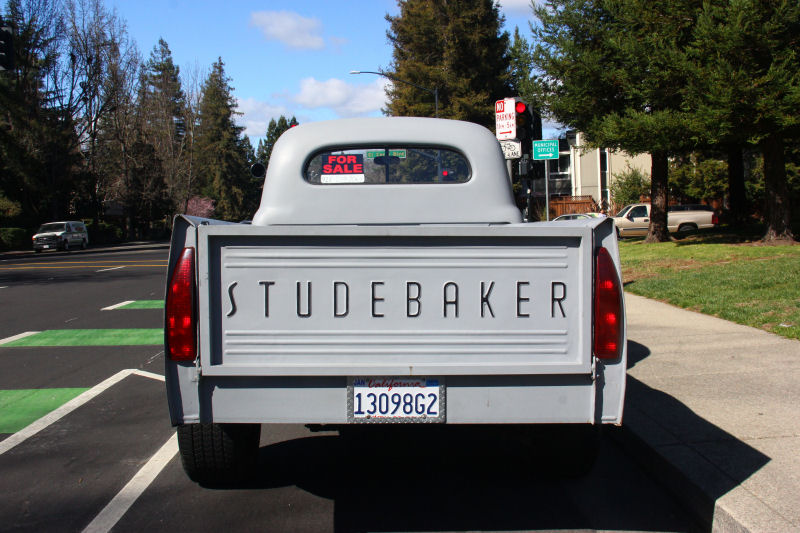 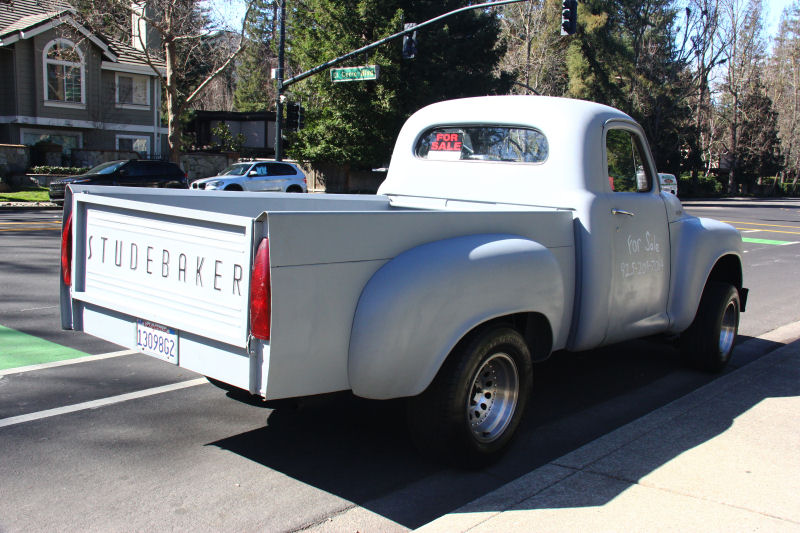 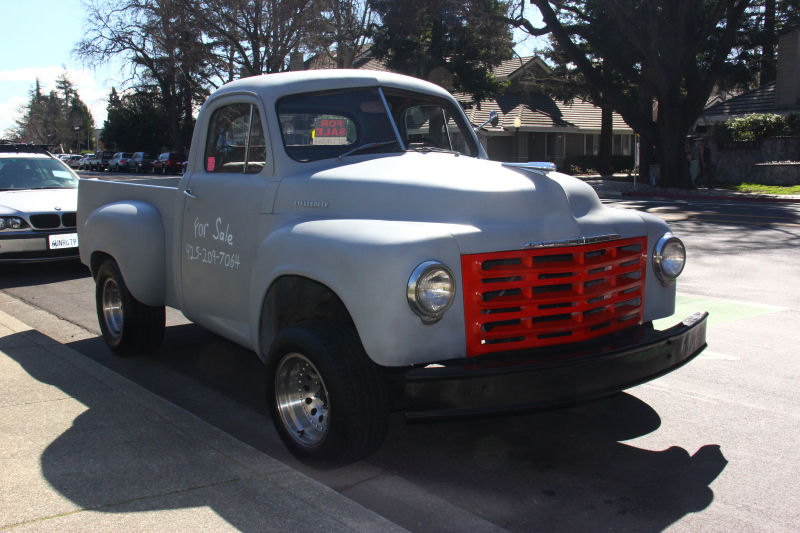 The '49 Stude trucks were the best selling pickups the company ever made, with nearly 65,000 units produced across all manufacturing facilities. Sadly, company president Fred Hoffman left Studebaker before the '49 models went to market, and with him went the biggest support base for commercial vehicles at Studebaker. The R-Series trucks were largely allowed to stagnate for the next several years while Studebaker focused on passenger cars. For example, a V8 was available in Studebaker cars in 1951 but didn't get put into trucks until 1954, and the truck line used the same cab and bed for years. 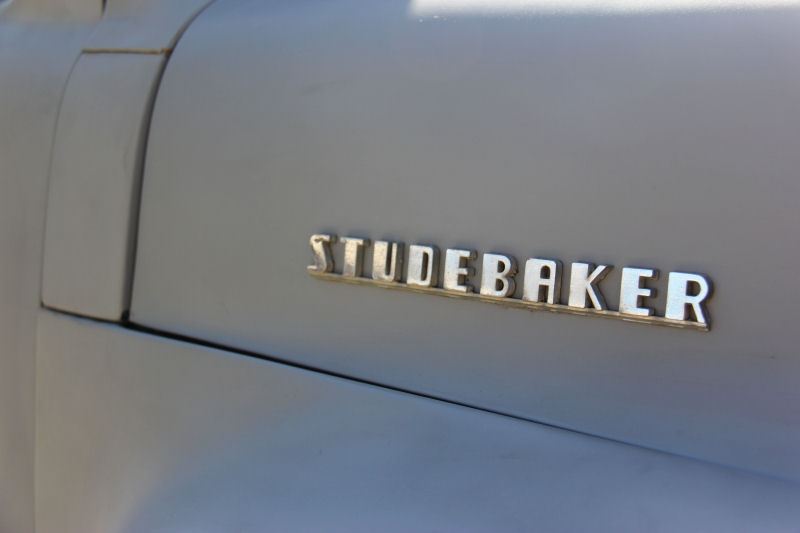 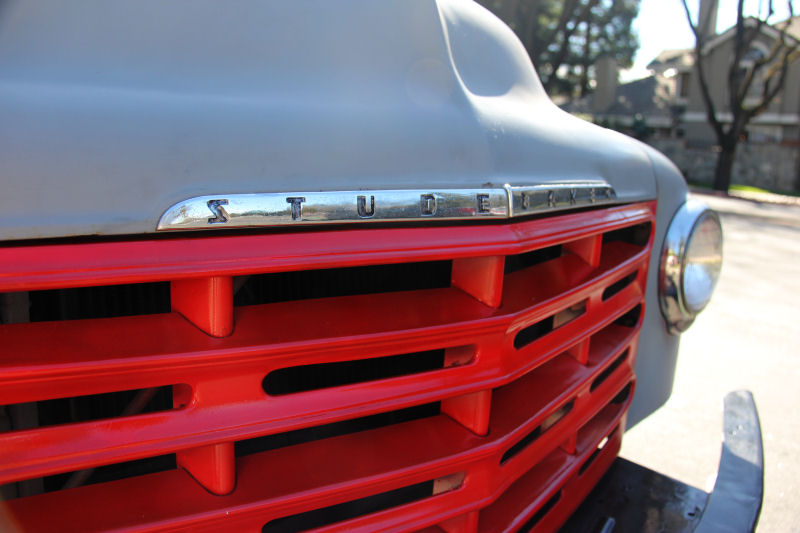 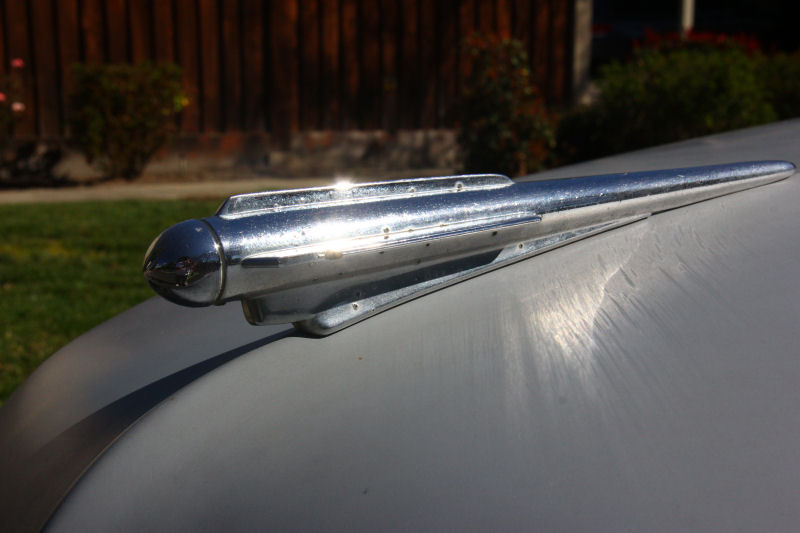 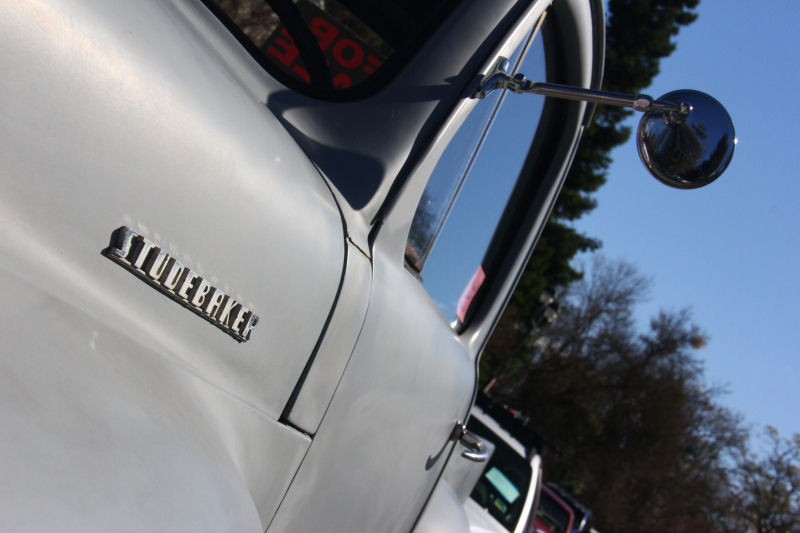 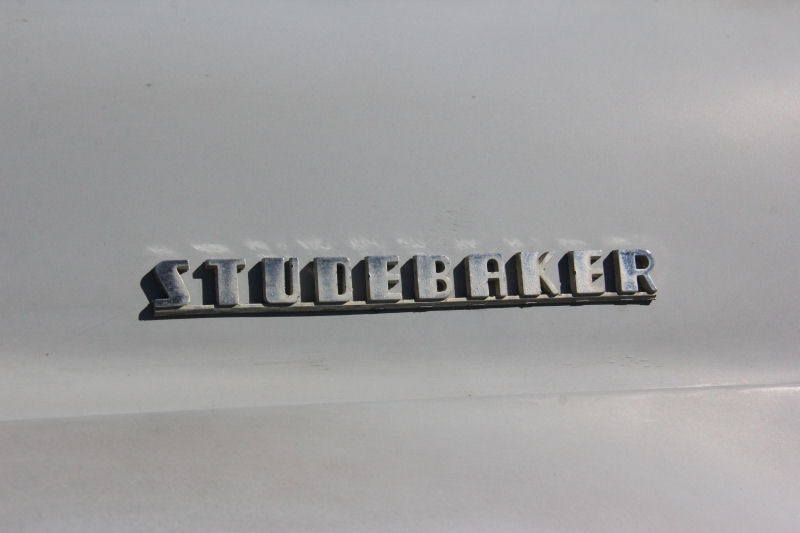 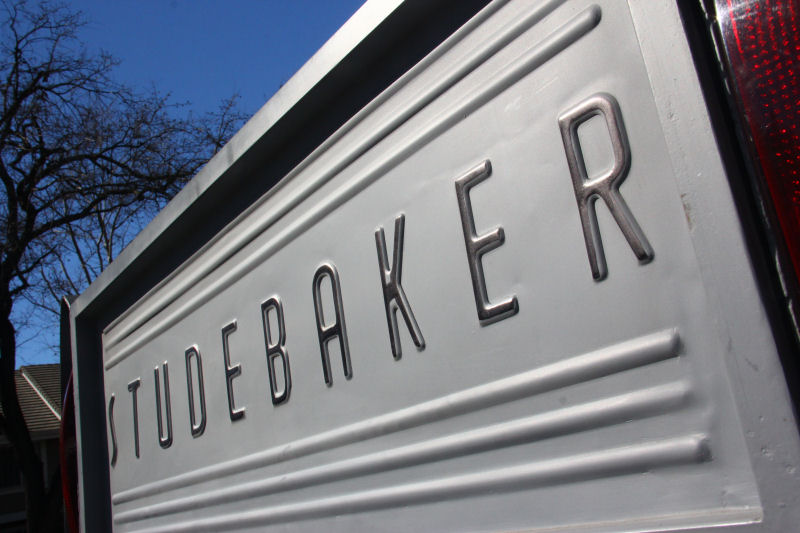 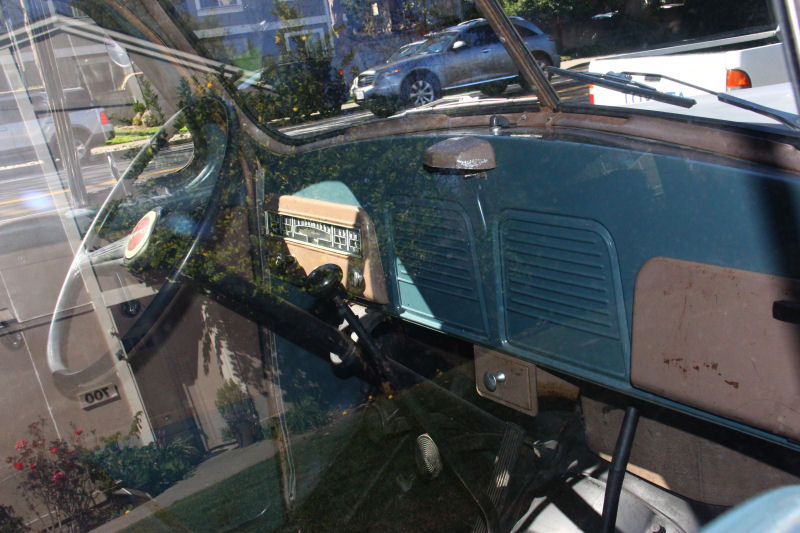 This truck wears a coat of gray primer with selective contrasting details in red or black. The interior is pretty well stock as is the running gear, with a flathead six-cylinder and manual transmission according to a Craigslist ad I found and saved around the time I photographed the truck. Unusually, the stock taillights have been replaced by what look to be 1990s Chevy C1500 Silverado lights trimmed to fit in the curved space on either side of the tailgate. It appears to ride on American Racing Outlaw II or similar wheels. Looking at the interior colors I'm left wondering what this rig was painted originally, the smoke blue (possibly Iroquois Blue or Maui Blue) or the taupe (possibly Tacoma Gray).

There's a lot of potential here and it's a solid truck. I hope whomever ends up with it doesn't go too crazy with it.

Studebaker Drivers Club is an excellent resource if you're interested in these trucks!
Posted by Jay Wollenweber at 12:00 AM