While I'm on my Euro-centric kick this week, let's explore a pint-size phenomenon from jolly old England, shall we? Yes, that's right, the classic Mini. 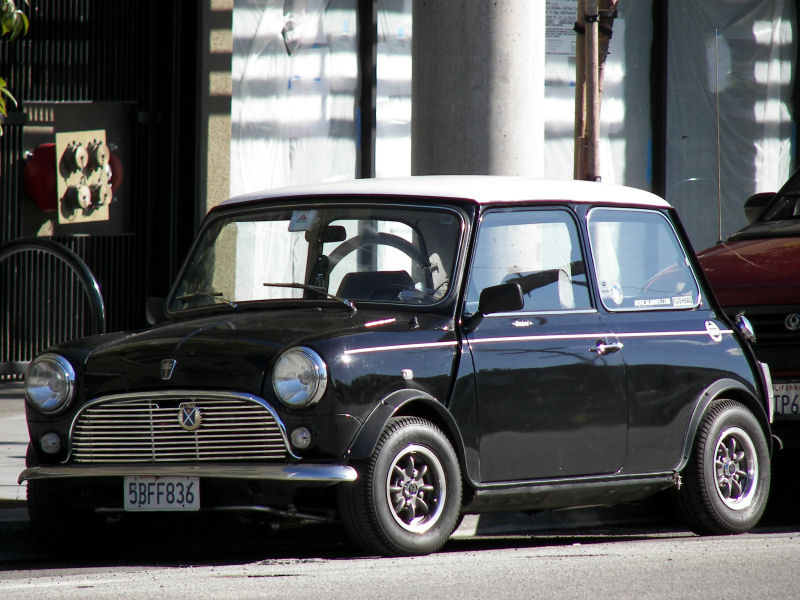 The original Mini was the brainchild of Sir Alec Issigonis, a marvel of packaging that could seat four people and their stuff in the smallest practical package that could still more or less move afterward. It was designed by order of Leonard Lord, president of British Motor Corporation (BMC), who demanded a "proper miniature car" to combat the wave of "bubble cars" that were swarming Britain's roads. Produced for over forty years between 1959 and 2000, it not only won out over the bubble car fad but won the hearts and minds of drivers the world over.
The Mini featured a tiny four-cylinder engine mounted transversely in the engine compartment to save space. The car was designed to maximize interior and storage room, and it did that very well. Some 80% of the Mini's floorpan was dedicated to that purpose. It rolled on 10-inch wheels mounted right at the corners with a very short wheelbase. Those factors, combined with a suspension system that consisted of rubber cones rather than conventional springs, gave the car a firm ride and go-kart-like handling.
On the topic of packaging, simplicity was the order of the day. The car was on monocoque, or unibody, construction without a separate frame (most passenger cars today are built this way, but back then a separate frame was common). It had no glovebox, partly because it had storage space everywhere else. The trunk lid hinged on the bottom to increase storage. On early cars, door hinges were on the outside. Welded body seams were plainly visible. To get an idea of how basic the Mini was, seat belts, door mirrors, heater and radio were extra-cost options. An automatic transmission was not available at all until 1965. Radial tires did not arrive until 1973 and roll-up windows until 1974. And yet, the Mini featured some tech that was brand new for the era as well, being the first car to have a flexi printed-circuit board behind the dash, and first to offer run-flat tires (after 1974). The 1967-73 Minis are called Mark II, and feature a facelifted grille and larger rear window. Hydrolastic hydraulic suspension softened up the ride and made the car more civilized. Mark III Minis were built from 1970 until 2000 and featured even more changes such as hidden hinges, larger doors and, puzzlingly, a reversion to the old rubber cone suspension (probably to save money). The Mark III Mini was no longer a Morris or an Austin, just a Mini. British Leyland crumbled in the 1980s and Mini was taken over by Rover Group, which was itself taken over by BMW in 1994. By the time Mini production ended in 2000, there had been seven incarnations.
The Mini was sold under a variety of names in the increasingly confusing BMC empire. Depending on the market, sometimes it was a Morris Mini-Minor, sometimes it was an Austin Seven, Morris/Austin 850, Austin Partner, Morris Mascot, and eventually it became known just as the Mini. Further adding to the confusion were other body styles, such as a wagon called the Traveller (Morris) and Countryman (Austin); a van, called the Van; a small military utility vehicle called the Moke; a downright cute little pickup version; and the Clubman and 1275GT, a facelifted Mini built under the ownership of British Leyland between 1969 and 1980. There were also two other non-Minis, in the form of the Riley Elf and Wolseley Hornet.
But arguably the most famous Mini variant was and will always be the Mini Cooper and Cooper S, tuned by John Cooper Works. They were bred for rally racing and competed quite successfully. Many Mini Coopers featured contrasting hood stripes and white roofs to help them stand out during racing. These decorations carried over to the street versions. Coopers were popular as the performance version of the Mini until the early 1970s when British Leyland decided not to pay John Cooper money anymore and dropped the name. Fail.
The Cooper name came back in the '90s when Rover took over and continued until 2000. In total, 5,387,862 Minis were built.
BMW introduced an all-new MINI Cooper in 2001, a car which was a fair amount bigger in every way, and far more modern, safer and faster. But it just doesn't have the quirky charm of the original. Quirky charm is important to many people, especially in urban locations like San Francisco. Minis are prevalent there, both new and old. I've never seen so many classic Minis though, as I have in SF. Since I can't tell the difference well enough to narrow them down to an exact year, here for your viewing pleasure are three Mini Coopers I've seen in The City.
The green and black ones are pretty old; they wear the Mark I front grille but both appear to have updated taillights (the black one has a set of custom lights which, in my opinion, do absolutely nothing for the car). They are apparently newer than 1969 judging by the hidden door hinges. The green and blue ones are right-hand-drive. The blue one looks like a later model Mark III Cooper, probably from the Rover era. It shares similar badging with the black one. All three cars roll on 8-spoke Minilite-style wheels, a common and generally attractive modification. 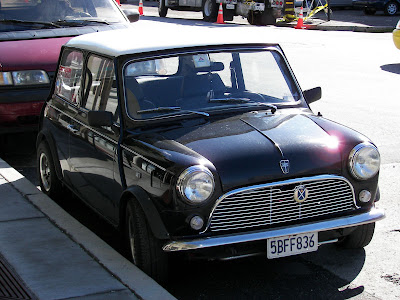 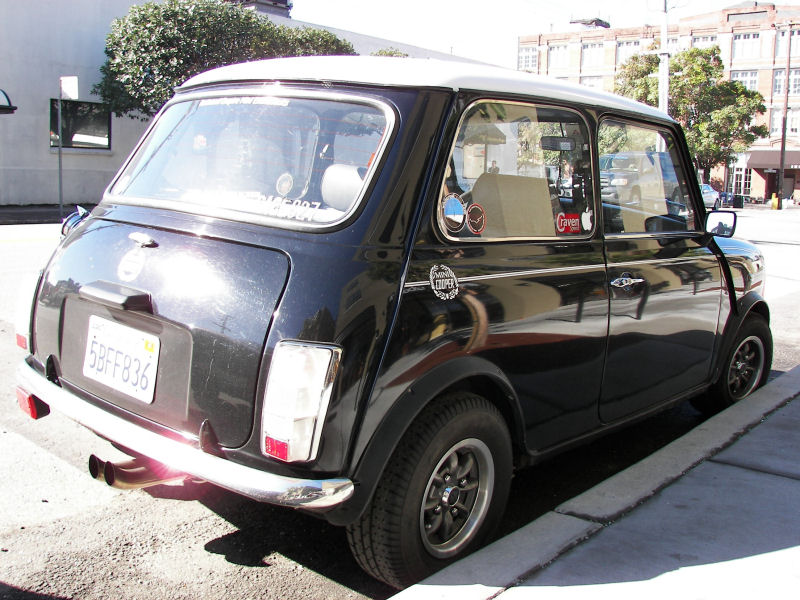 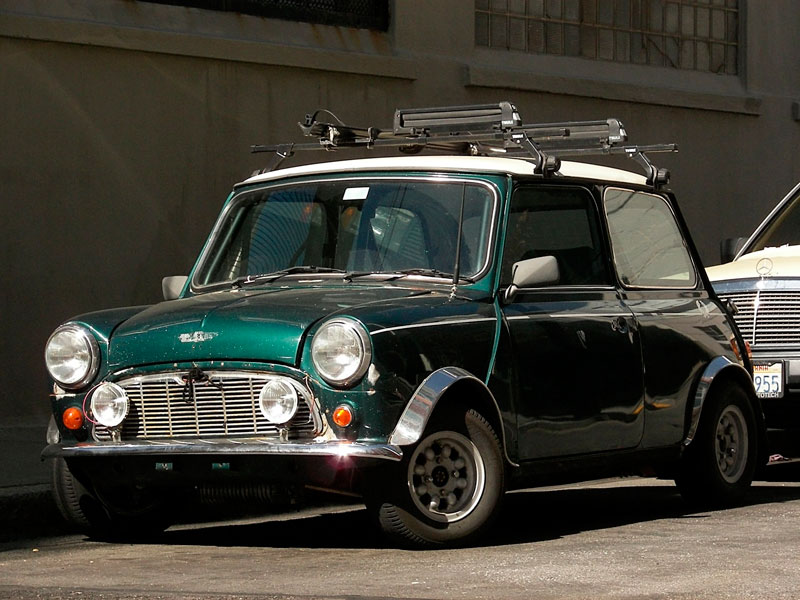 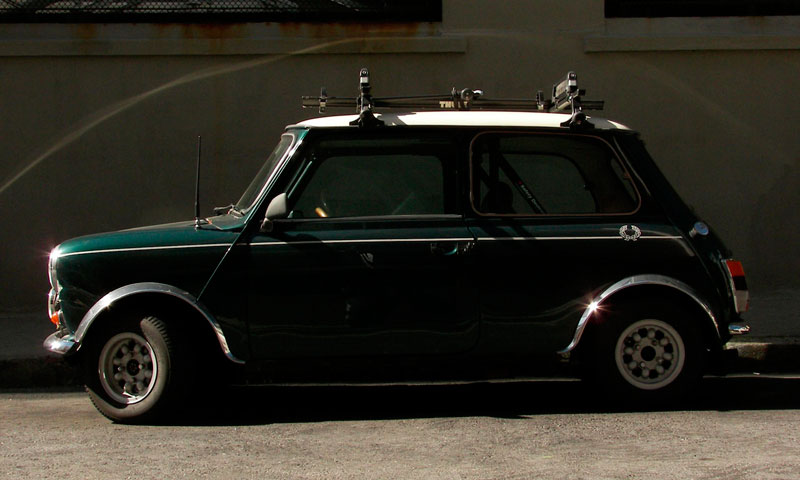 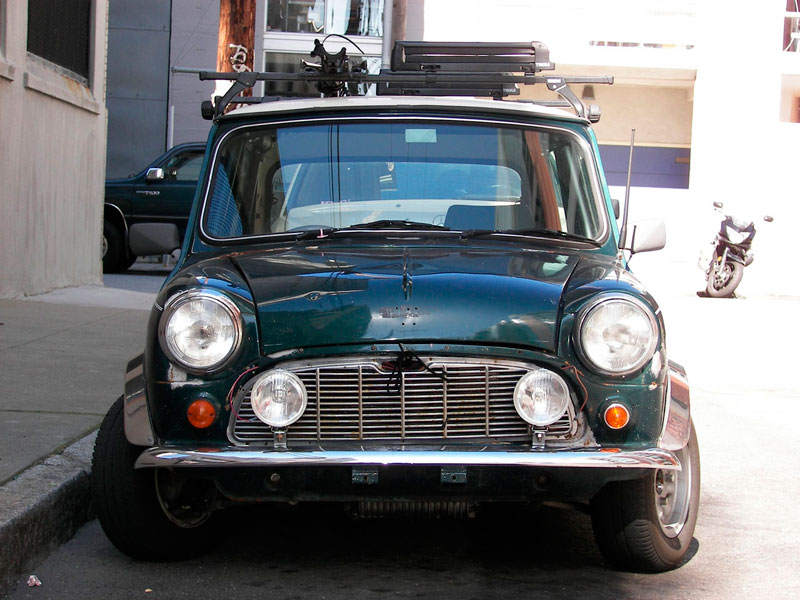 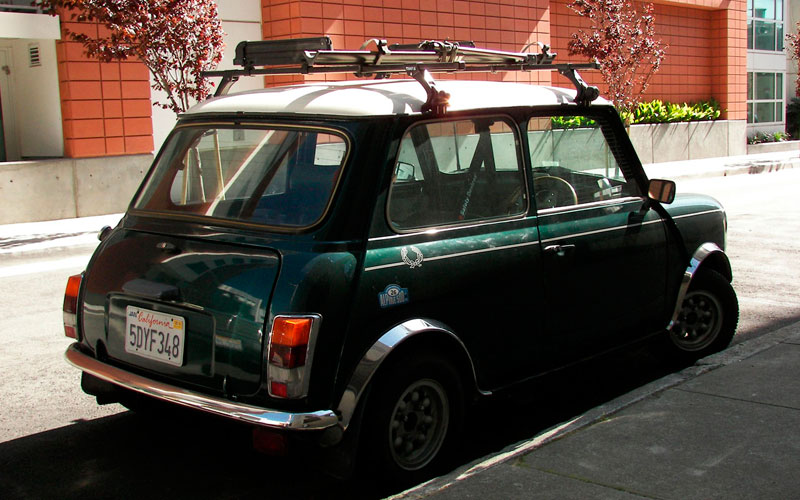 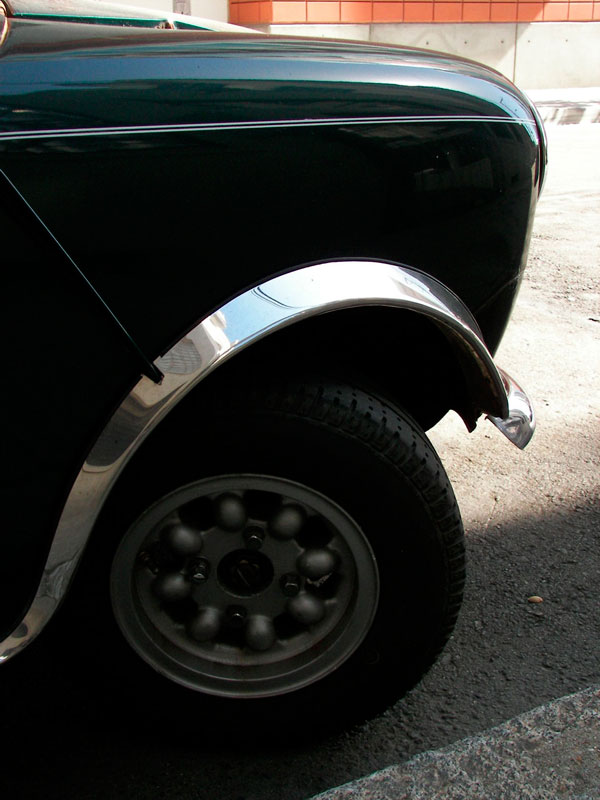 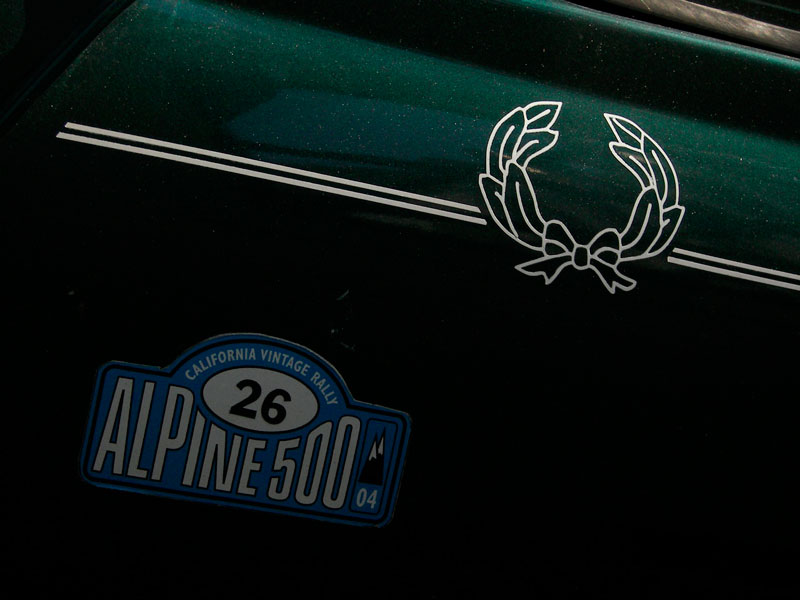 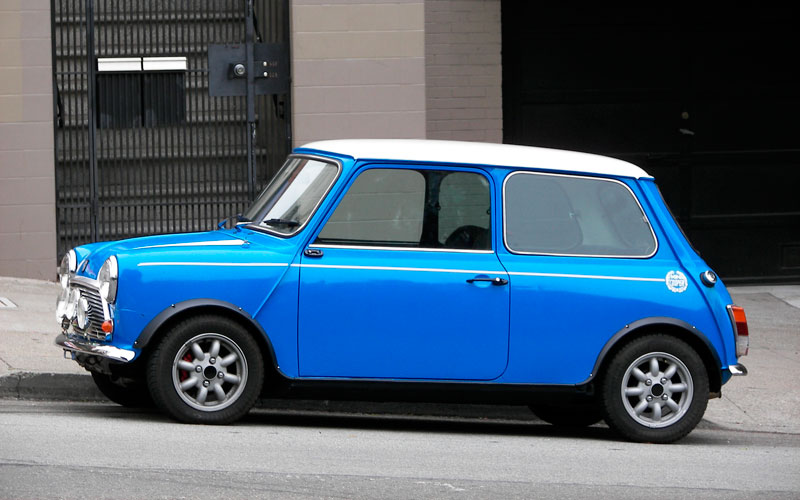 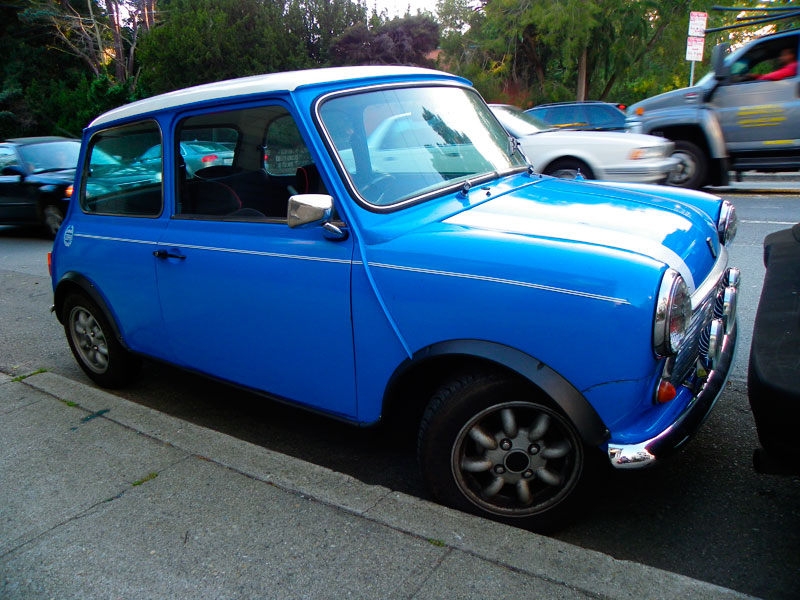 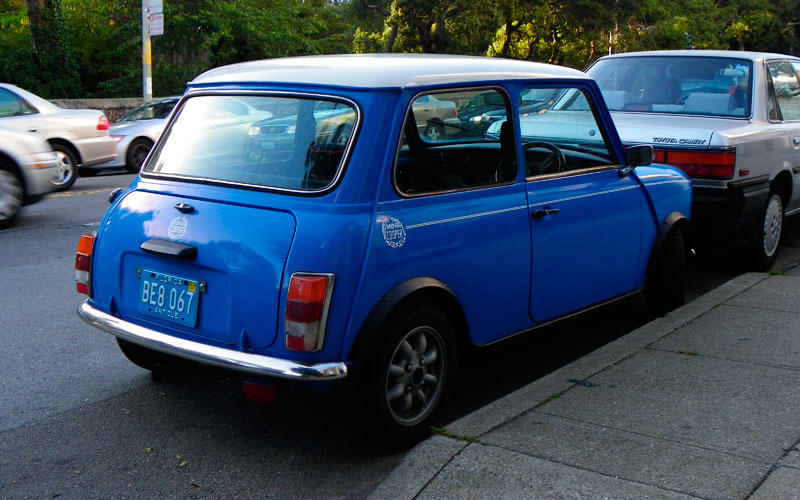 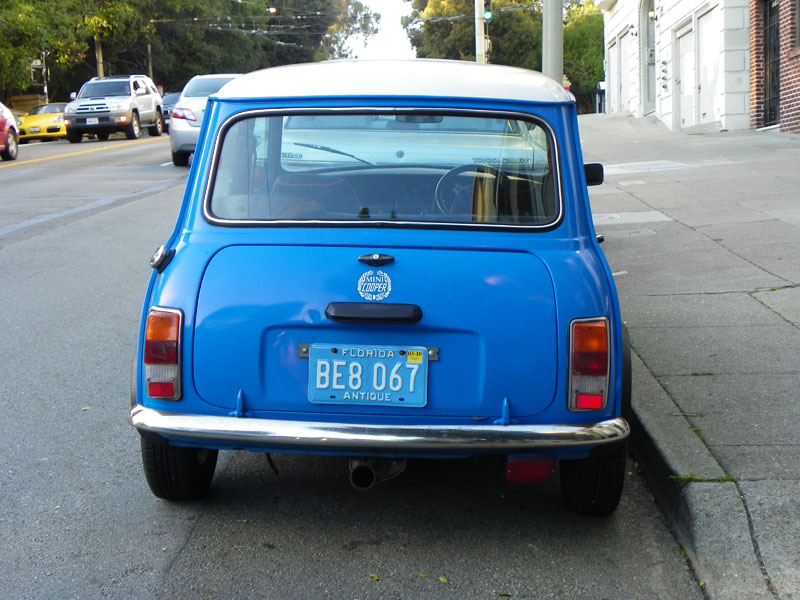 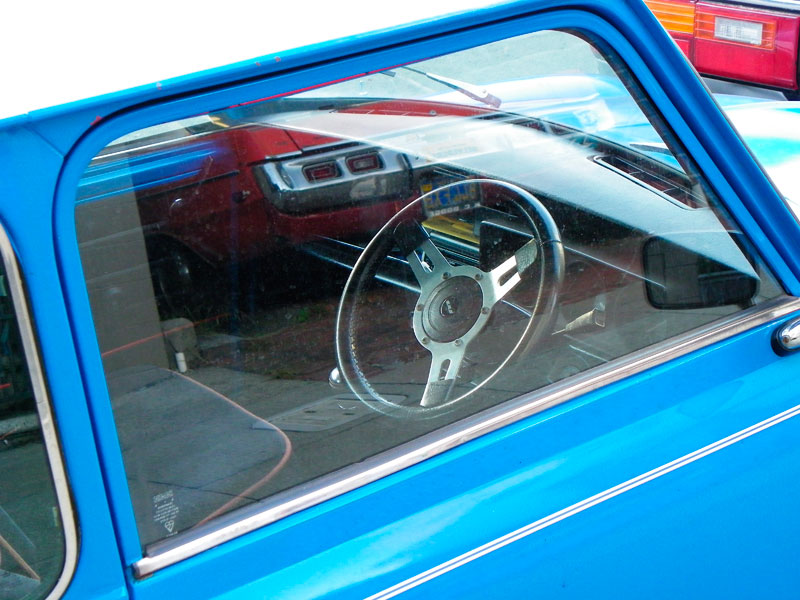 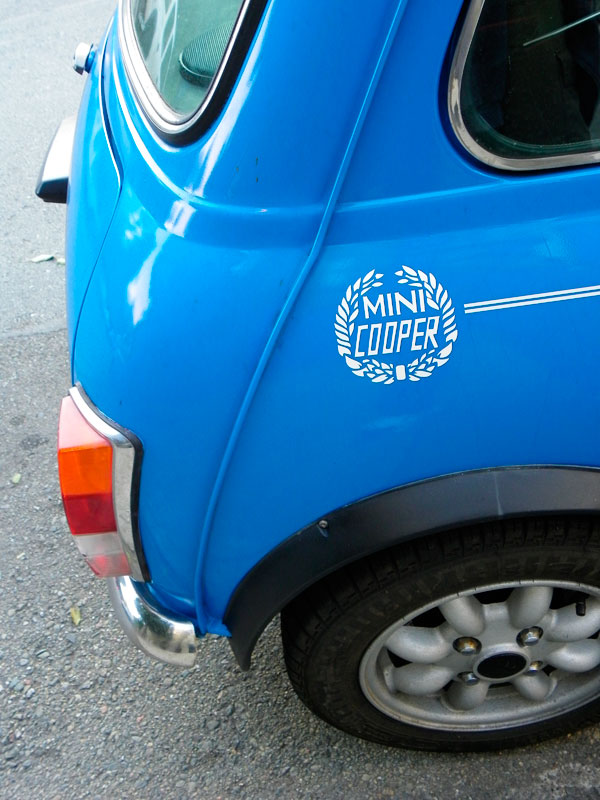 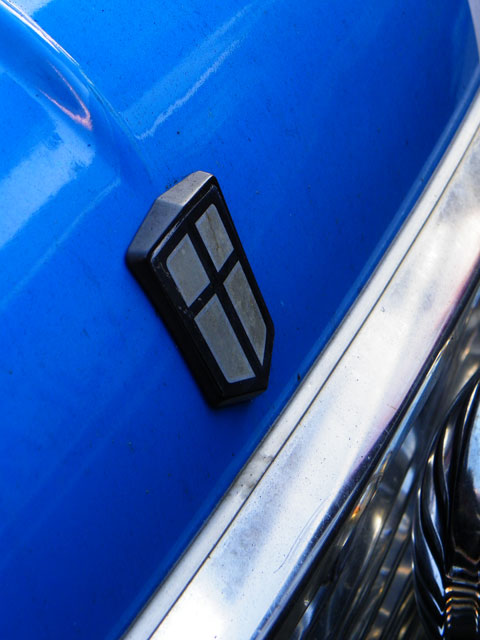 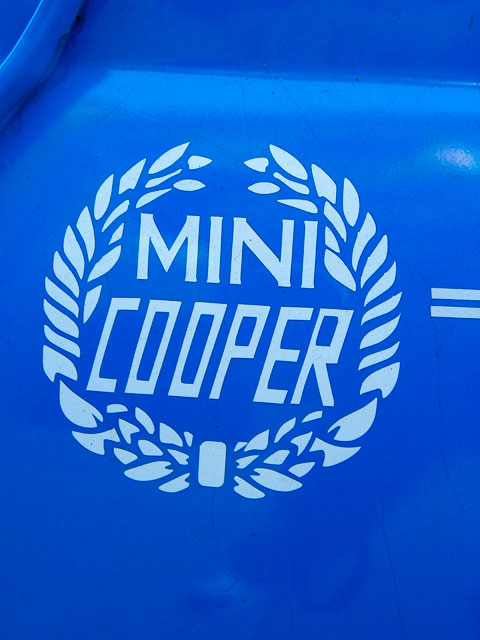 Rule Britannia! God save the Queen! Cheerio and all that rot. Carry on.
Posted by Jay Wollenweber at 3:58 AM