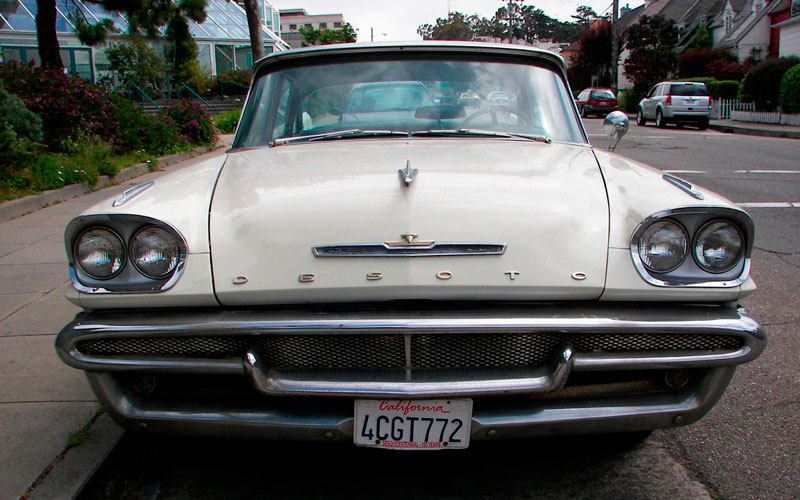 I always love it when I'm in the vicinity of Lone Mountain in San Francisco, near the northeast corner of Golden Gate Park. I've mentioned before that a collector lives in that area who owns a host of excellent '50s cars in daily-driver condition. This is one of them. It's a 1958 DeSoto Fireflite four-door sedan. 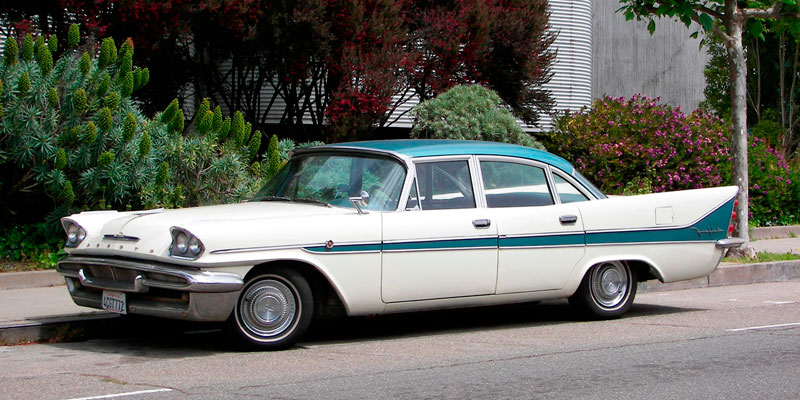 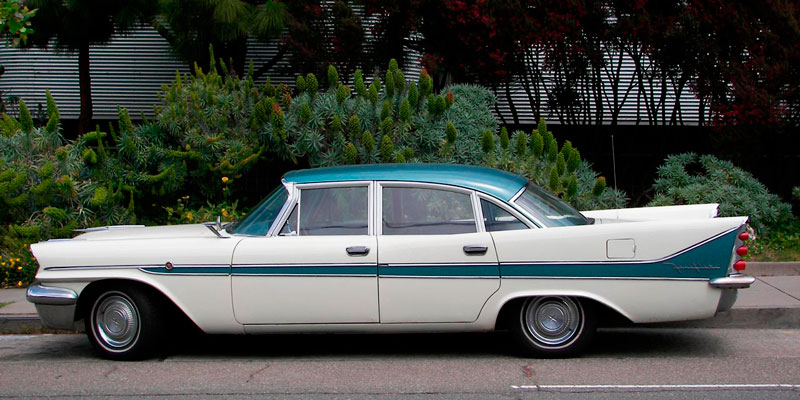 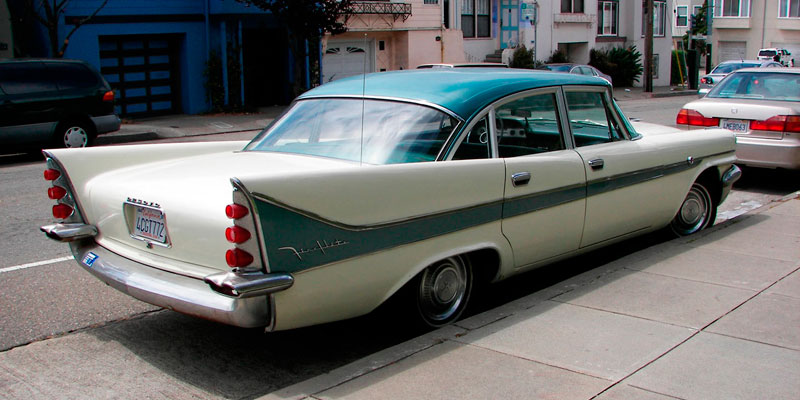 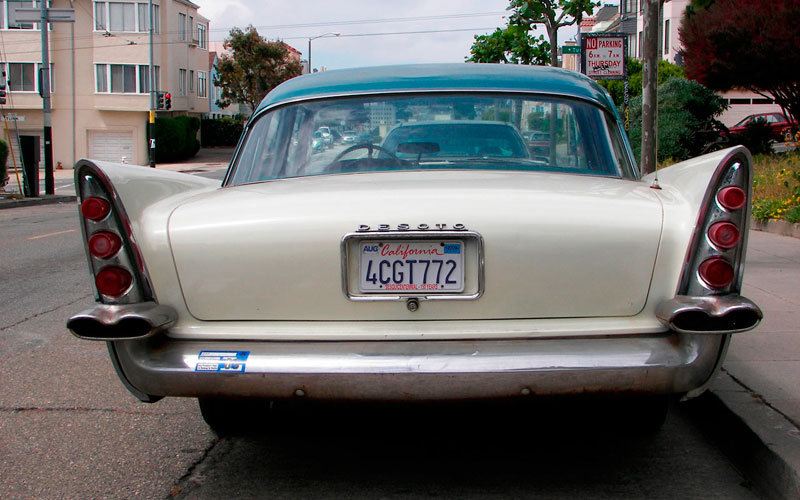 DeSoto is one of the great lost brands in American automotive history. Made by Chrysler and slotting into a middle spot in the Chrysler Corporation brand hierarchy, DeSoto made some pretty nice cars during its 33-year run. Walter P. Chrysler founded the brand in 1928 as a mid-priced division between Chrysler and Plymouth. Then Chrysler bought Dodge and DeSoto was instantly redundant. The company played with marketing strategies, first selling DeSotos cheaper than Dodges and then switching places so that DeSoto was closer to Chrysler in styling, content, and price. 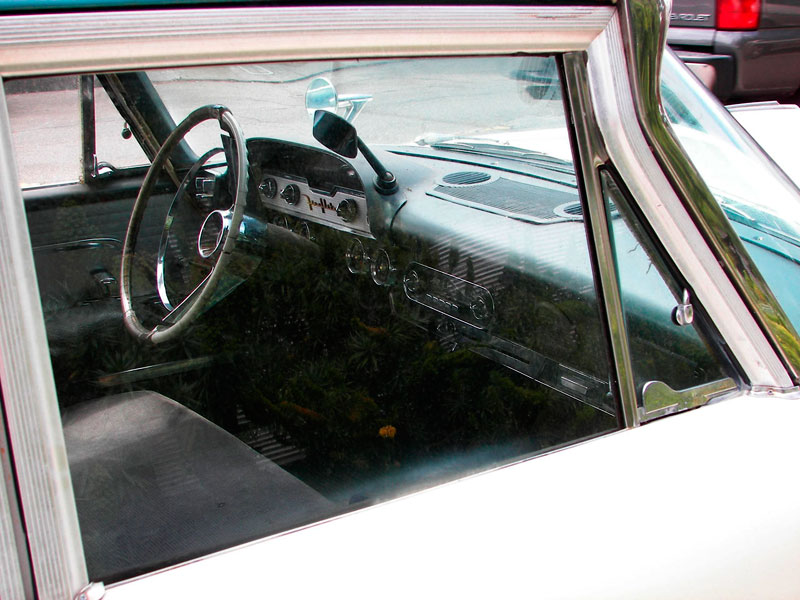 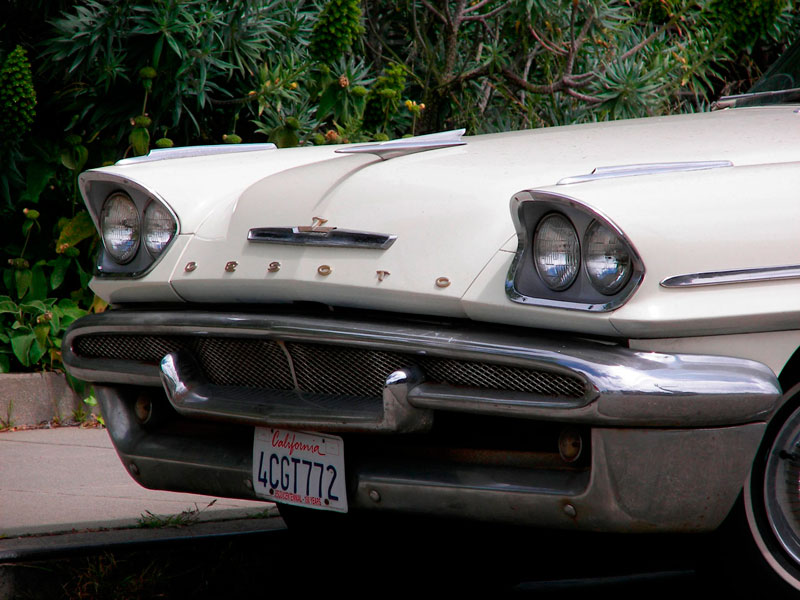 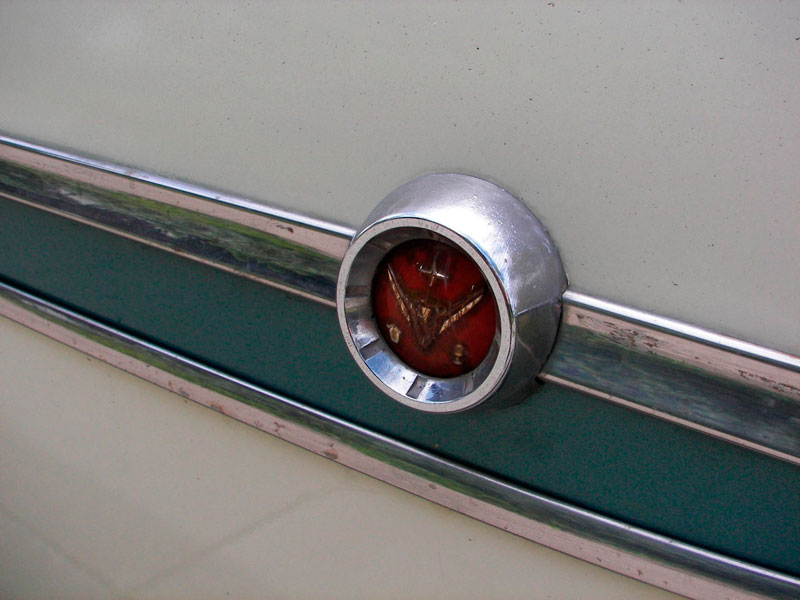 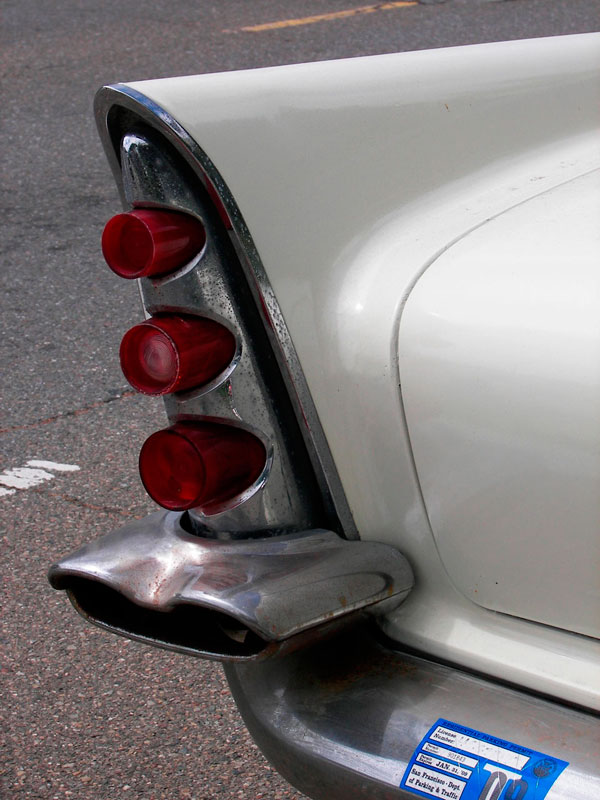 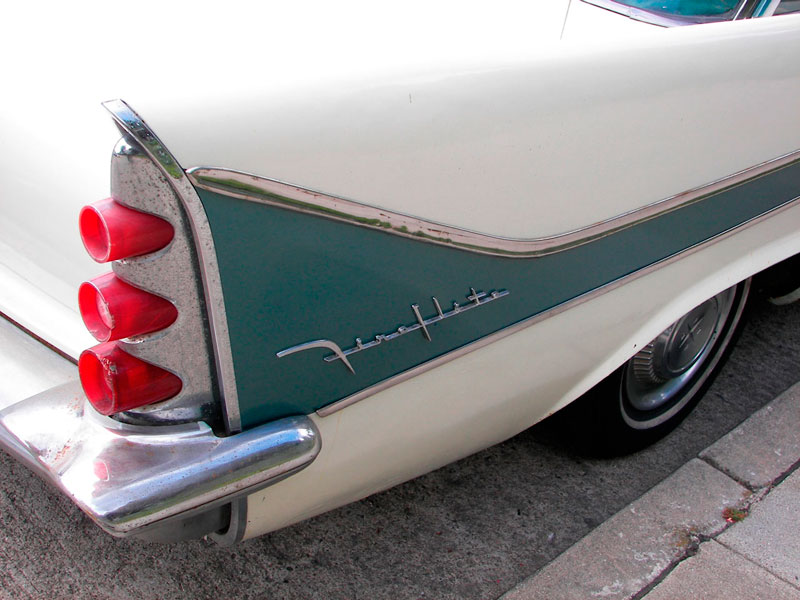 DeSotos often wore some of the more interesting sheetmetal in the industry. Come 1955, things started to get really good. The roly-poly rounded designs of the first half of the '50s were going away in favor of bigger, sleeker, longerlowerwider cruisers slathered in bright chrome and progressively taller tail fins. In 1955 DeSoto introduced a full-size model called the Fireflite. It was bigger and fancier than existing DeSoto models and sported a V8 hooked up to a PowerFlite automatic tranny. Pastel-colored two-tone paint was a common option and gave the cars more character.
In 1957 Virgil Exner pulled out all the stops with his "Forward Look" design language. The new Fireflites were big and bold and beautiful, with long sweeping fins that, surprisingly, were useful for high-speed stability (Chalk up another one to Wikipedia for that factoid). A new top-line model, Adventurer, was added, knocking the Fireflite down to #2. The 1957 models were available with either two or four headlights in preparation for the 1958 government headlight legislation allowing four. In 1958 all models went to four headlights and the grille and side trim were refreshed. Unfortunately 1958 saw a bad economy which killed the DeSoto's sales, a slump from which it would never recover. It's a shame, too, because these late-50s DeSotos are by far my favorites. In 1959 DeSotos got a new front end, side trim and restyled fins. I've always liked that year, and one will eventually be featured here. Unfortunately, 1960 was about as ugly as 1959 was pretty, and 1961 was even worse. These were very difficult years for Chrysler as it struggled to design cars that wouldn't scare people off of dealer lots, a mere three years or so after Exner's beautiful Forward Look cars debuted. It was also the end of an era, as DeSoto's dealer network dried up and the last 1961 DeSoto rolled off the assembly line in November 1960.
This Fireflite is a fairly clean and original example of the breed. As one would expect from a 52-year-old car parked a mile from the coast, it shows its age in the form of hopefully minor rust in the rockers and bumpers. The body is straight and the interior looks really good for its age. All the trim and hubcaps are there but the plastic taillight lenses are starting to crack and could stand to be replaced. One of the things I find funny about the design of this car is the pedestrian safety factor. The door handles are flush-fitting so you'll never hook somebody as you go by, but you'll spear them on that sharp jutting hood ornament for sure. I'm guessing the owner really likes this car, since it's one of the only ones I see every time I go by his house. All the others get moved around or disappear and get replaced by other cars. Hope he addresses that rust before it gets worse.
Posted by Jay Wollenweber at 4:17 AM