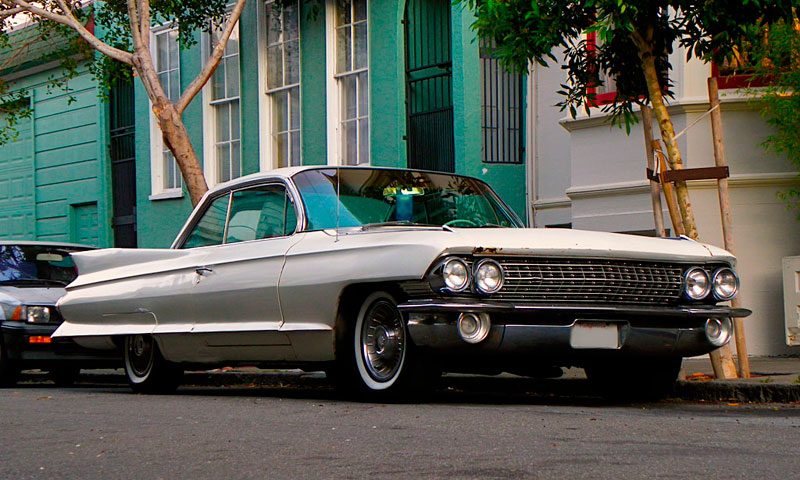 This blog has featured many brands of old cars, but until now there have been no Cadillacs! How can this be? Chalk it up to their rarity, value and the general lack of street parking space that make it difficult to own, drive and store a vintage Caddy in urban areas. That, and San Francisco's famous undercarriage-scraping hills. 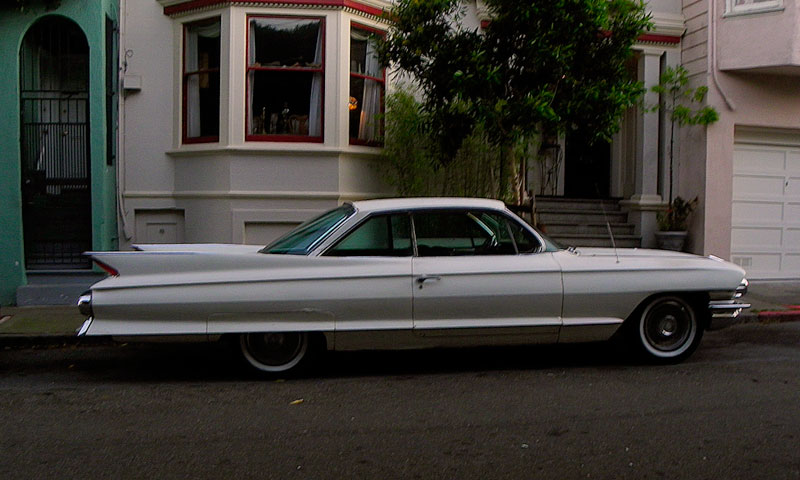 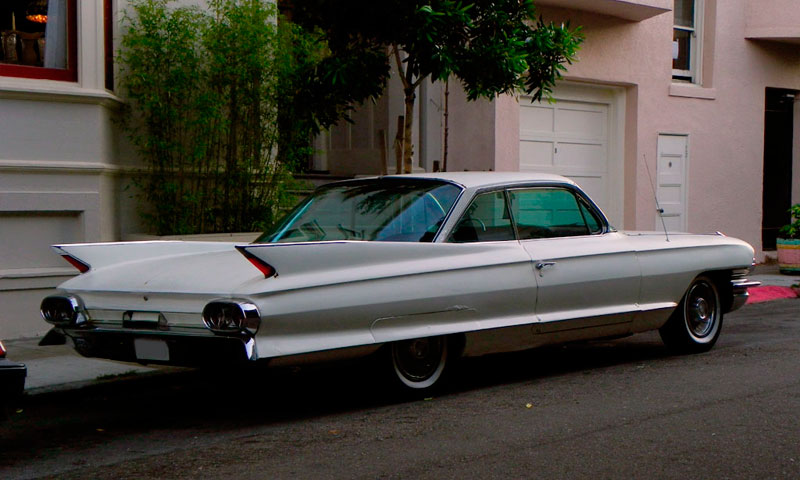 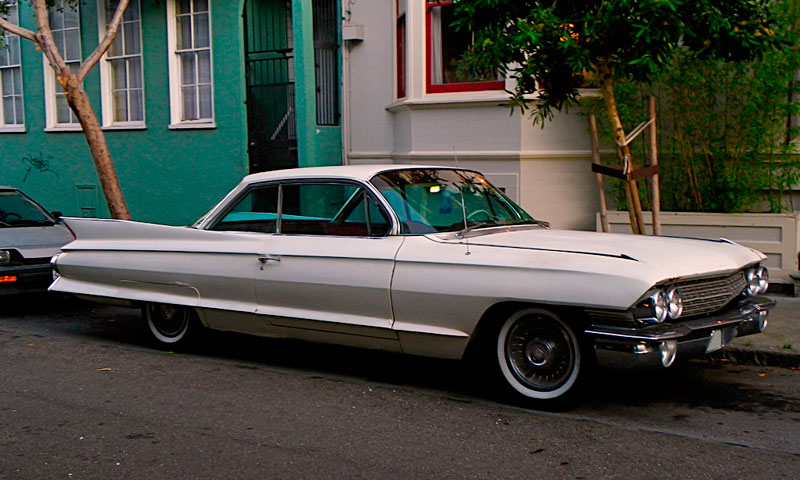 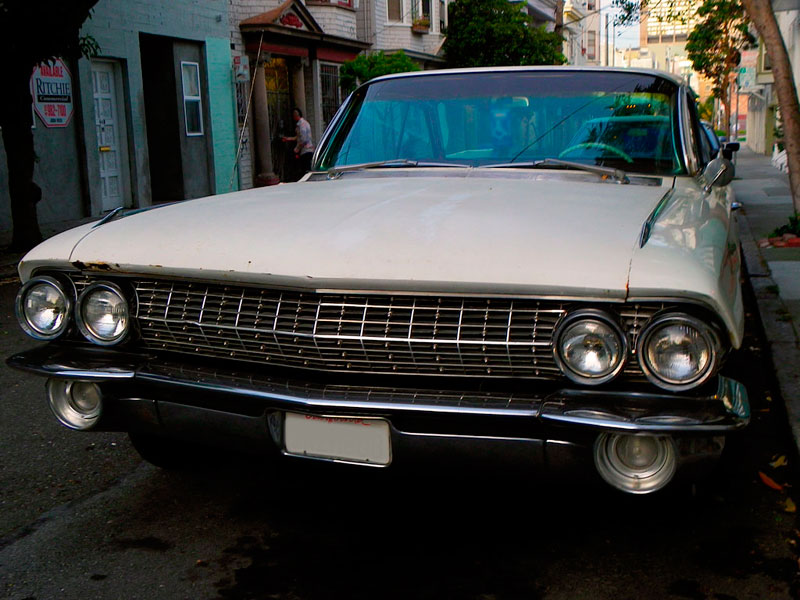 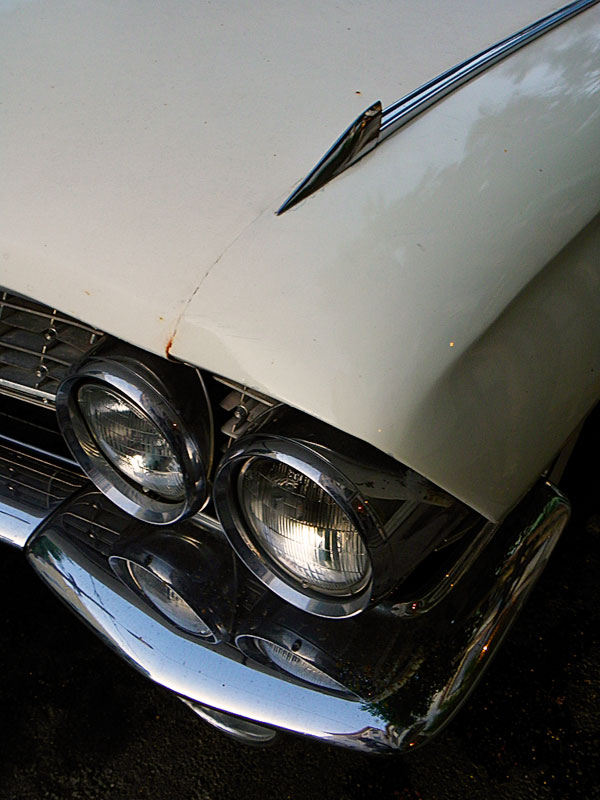 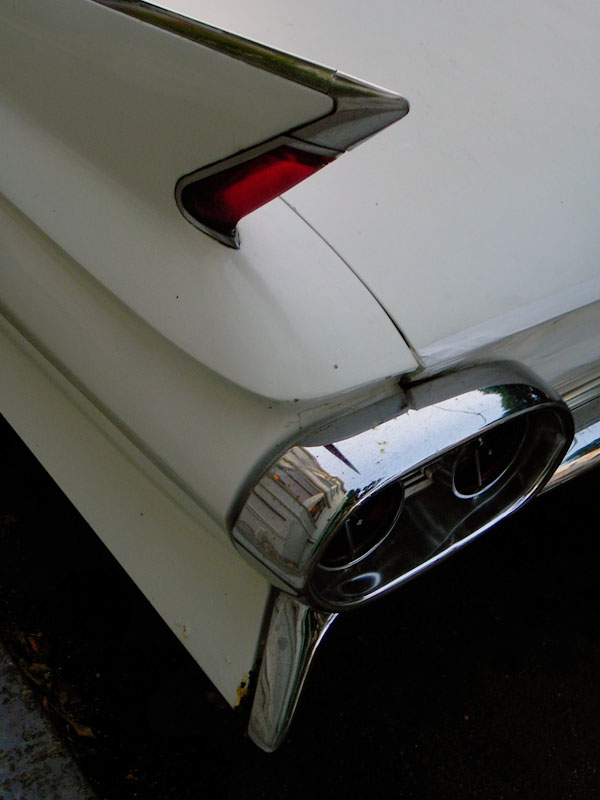 Cadillac used to be called "the Standard of the World" when it came to building luxury cars. After about 1970 that reputation started to slip, as they started transitioning to front-wheel-drive platforms and poorly-engineered smog-controlled engines like the ill-fated "V8-6-4" (an early experiment in "displacement on demand" cylinder deactivation, which, while commonplace today, was virtually untried and unproven back then). As overall quality collapsed in the 1980s, General Motors's luxury division was being overtaken by the Germans and by Japanese upstarts like Lexus, Acura and Infiniti. Outdated models like the body-on-frame Fleetwood Brougham soldiered on into the early 1990s, and from 1997 through 1999 Cadillac was almost exclusively FWD. The sole exception was the RWD Catera sedan imported from Germany. Today the brand is enjoying a resurgence with a renewed focus on performance luxury.
Before 1970, though, Cadillac was on top. The company was free to build massive, chrome-laden, finned beasts with powerful V8 engines and a wealth of amenities. Tail fins had first appeared in 1948, and steadily grown in size as the fifties wore on. They peaked on the 1959 Cadillacs, but by the early 1960s, tail fins were falling out of favor. The downsized fins on this 1961 model are an indication of that.
This car is a 1961 Cadillac Series 62 Coupe. It features a sharply sculpted body that looks quite modern compared to the 1960 model. It also looks smaller than the previous model, partly because it is. Oddly enough, the wheelbase only shrank by a half-inch, while overall length shrank by as much as ten inches. A 390 cubic inch V8 motivates this one, producing 325 horsepower.
It's owned by a massage therapist in San Francisco who reportedly rescued it from a junkyard. I'm glad he did, because it adds some much-needed flair to a city full of ugly little hybrids. As far as condition goes, it came from a junkyard, so one would figure it needs some work. And it does. There's rust here and there, but nothing that can't be fixed with some time and love (and investment). I'm particularly concerned about the right quarter panel and the right front corner of the hood. Other than those spots, the body looks pretty straight.
It's a nice car and one I'm happy to feature here as the first representative of Cadillac.
Posted by Jay Wollenweber at 8:59 PM