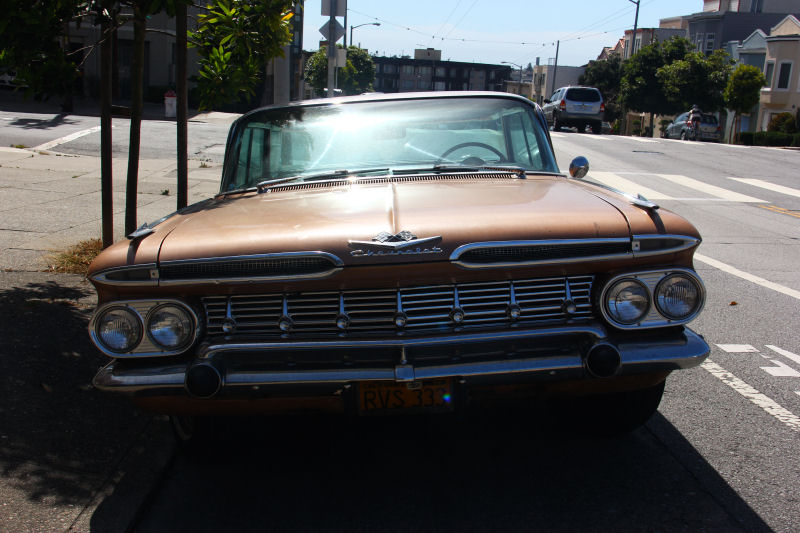 My God, has it really been almost two years since we last visited with Fifties Guy? My schedule doesn't allow me to visit San Francisco as often as I used to, and that means fewer opportunities to stop by the street-parked collection of the man I like to call Fifties Guy. Keen readers will remember his steel menagerie of chrome boats. Every so often he buys one, sells another, but always has enough old cars to stay busy with their upkeep. Here's a 1959 Chevy Impala flattop. 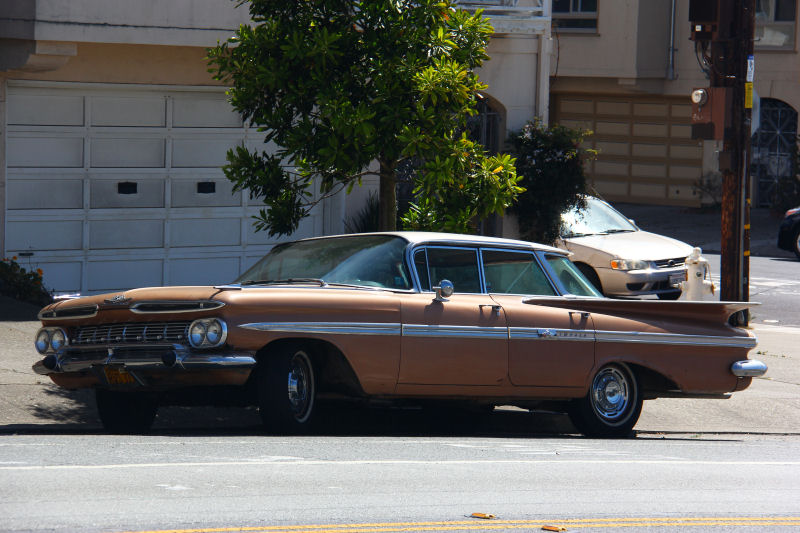 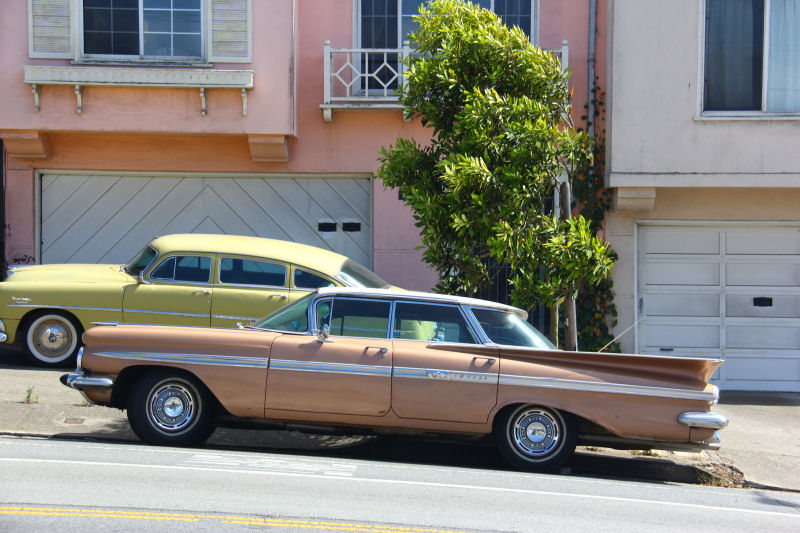 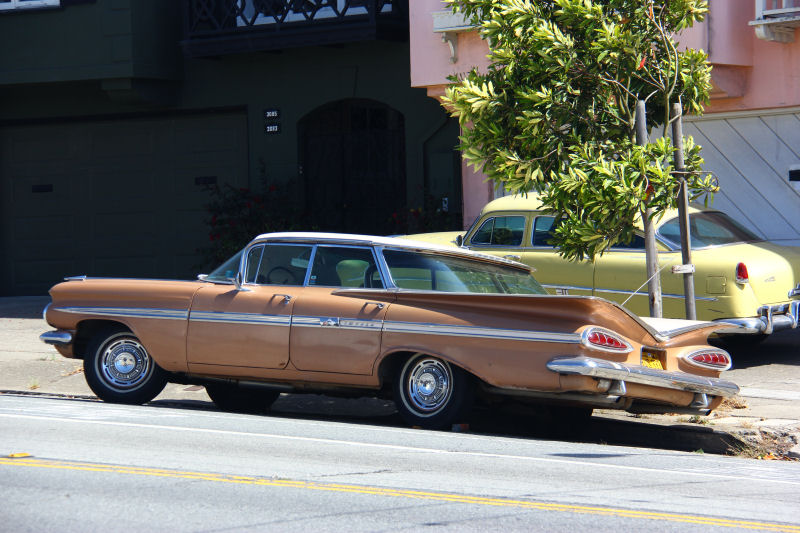 We've previously looked at two other '59 Chevys here on California Streets. I tried for a long time to track down the green Impala coupe on Potrero Hill, which would have made for a nice trifecta with the Brookwood station wagon and El Camino pickup. This Impala four-door hardtop turned up across town in the usual place where I find Fifties Guy's cars. It makes for a little bit of difficulty in photographing the right side of the car on account of the tree planted in the sidewalk, and the owner doesn't want me on his driveway. Remember that yellow '54 Hudson Hornet? I featured that one back in 2014. 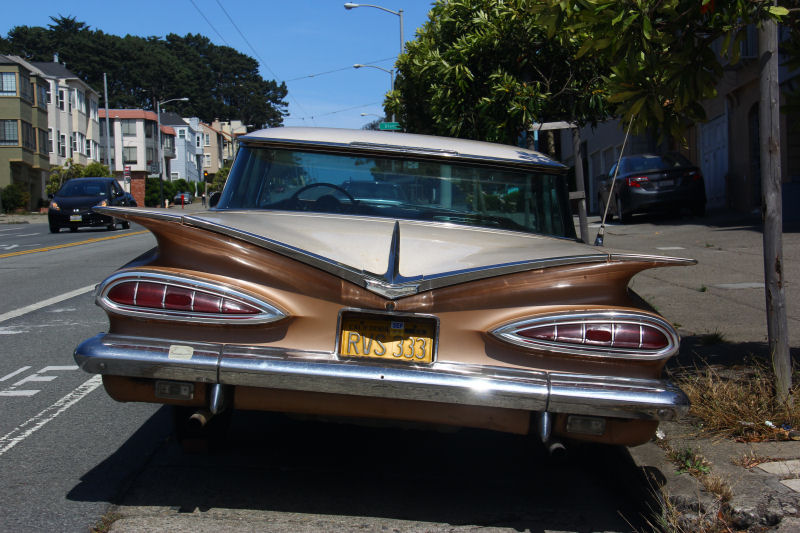 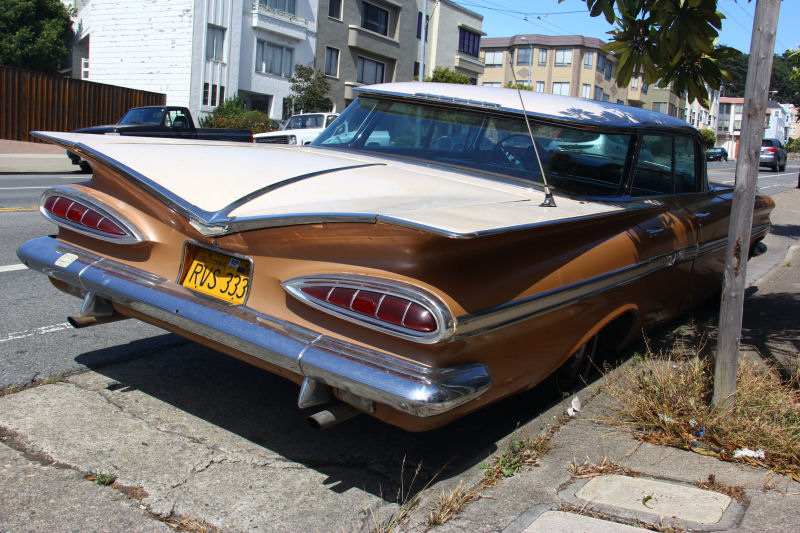 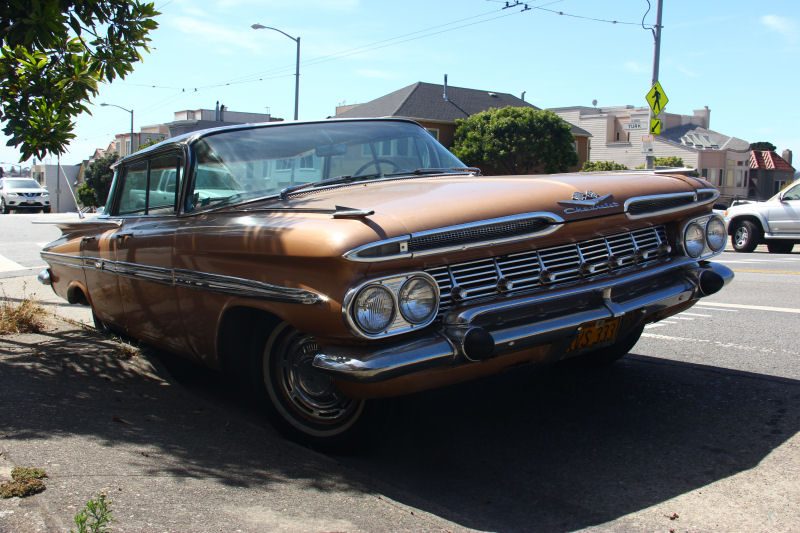 I've long been a big fan of the '59 Impala with its "bat wing" tailfins, "cat eye" taillights and long "eyebrows" above the main grille. It comes across as looking almost like a custom car right from the factory. General Motors' 1959 lineup was a mixed bag of styling excess that ranged from the wall-eyed Oldsmobile to the angry Buick to the downright crazy Cadillac with its fins three feet off the ground. The Pontiacs and the Chevys are my favorites from that year, and the Chevy was the choice of most car buyers at GM dealers. 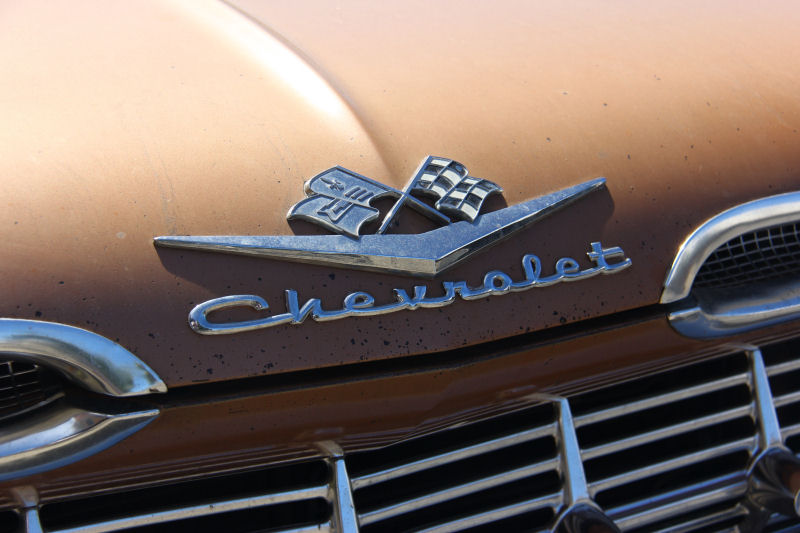 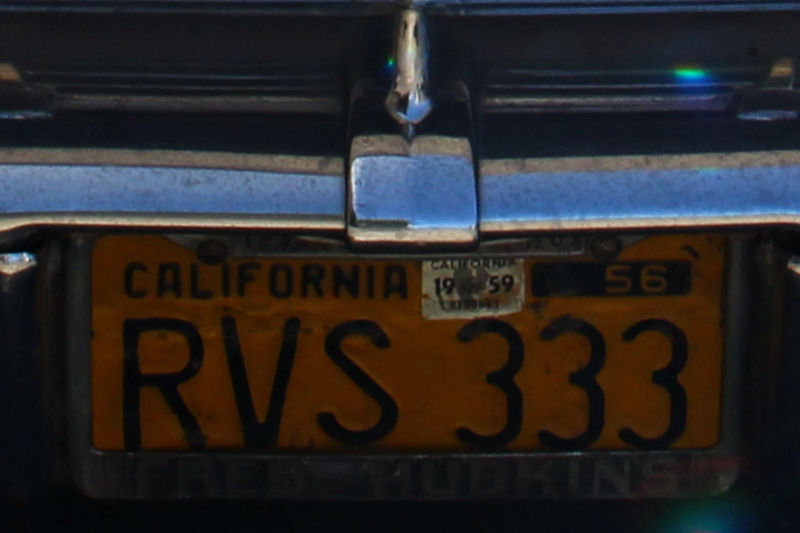 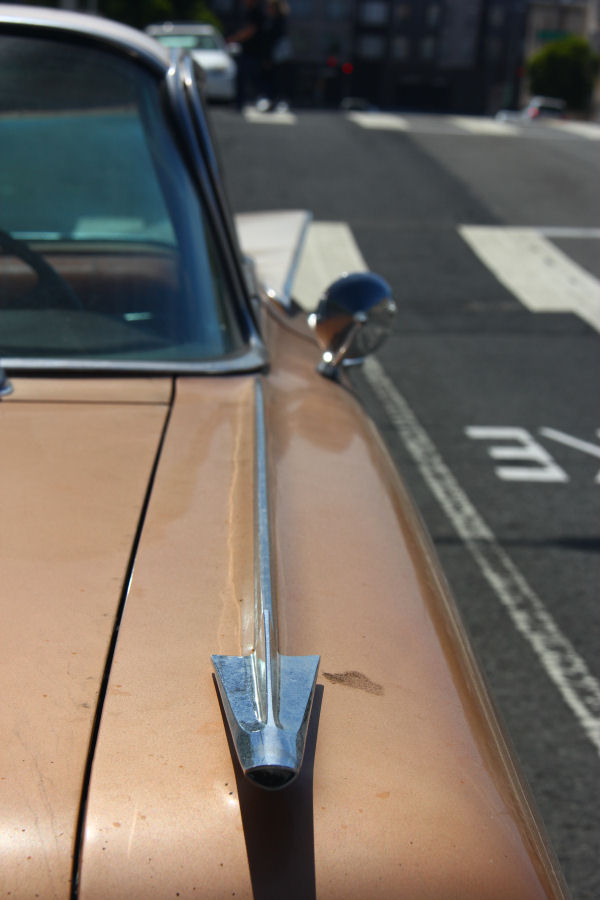 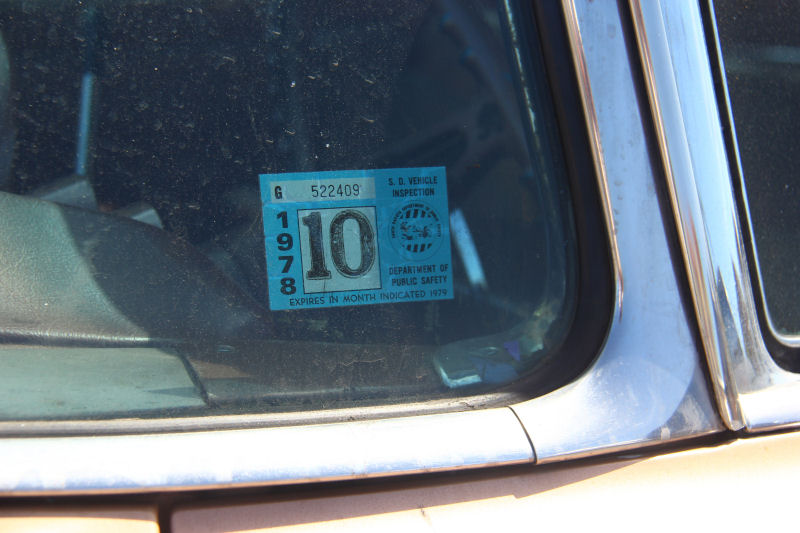 An Impala Sport Sedan such as this one was a $72 upgrade from the standard Impala sedan. The sleek flat-top car with its huge wraparound glass graced both covers and the first spread of Chevrolet's 1959 brochure, so GM must have been very proud of it. The 185 horsepower Turbo-Fire 283 V8 was the standard engine on most of these cars, with hopped-up versions of the 283 or bigger 348 engine optional. Frugal and patient buyers could get a Hi-Thrift six for slow, quiet economy driving. 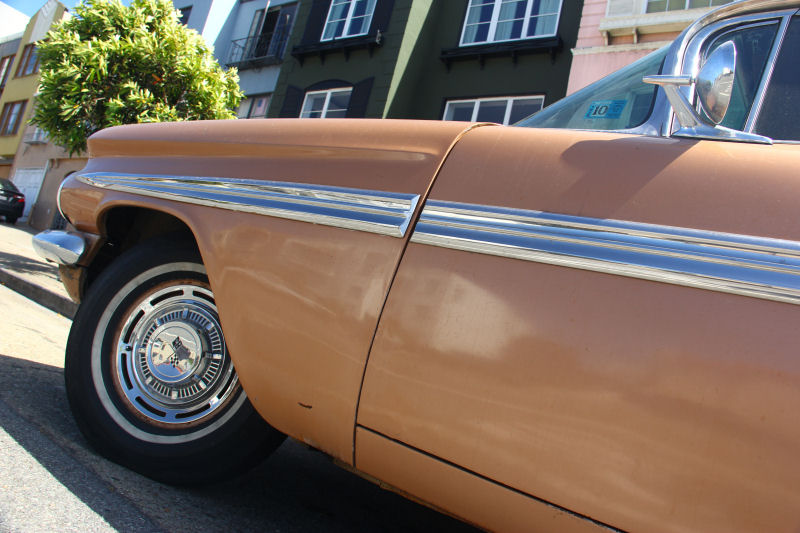 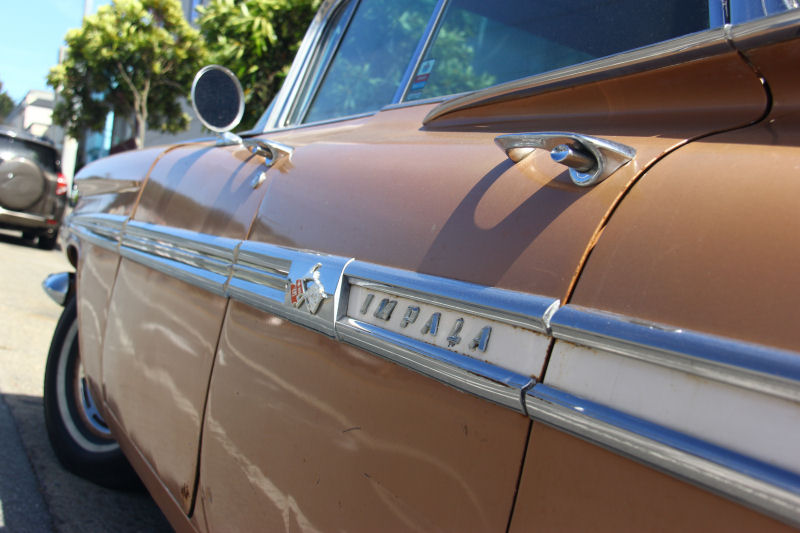 This Impala looks like it wears the factory two-tone combo of Gothic Gold metallic and Satin Beige. GM's "Magic Mirror" paints were touted as being able to "stay lustrous and new looking up to three years with only an occasional washing". Still looks pretty good after 57 years; I wonder if it's original. As a top-trim Impala it wears most of the body ornamentation available in the options list. Notably it lacks the $6.25 decorative second rear deck antenna or $10.50 body sill moldings, but it does have the optional $29.50 front grille guard and I think the $1.35 insect screens inside the grille eyebrows. Remember when you could order options piecemeal like that? Now you have to buy that kind of stuff aftermarket. 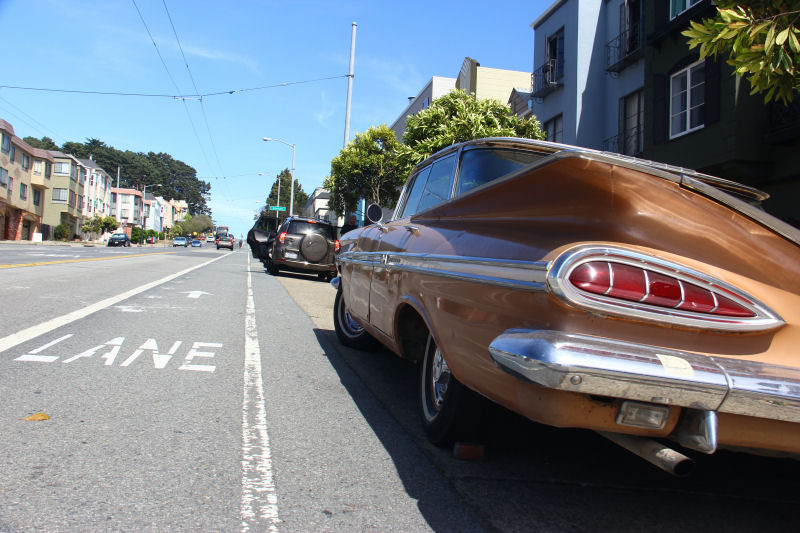 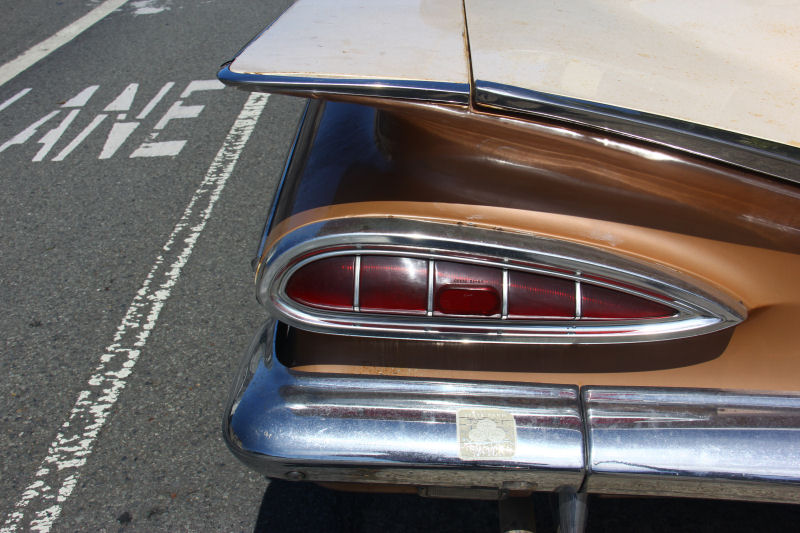 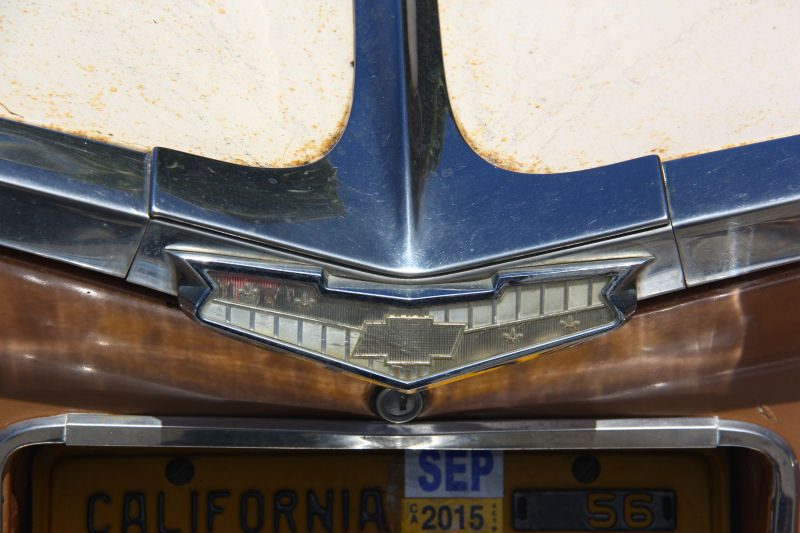 Judging by the stickers on the window glass, this car spent considerable time in South Dakota during the 1970s and '80s. Interestingly though, it wears a period 1950s California license plate. I wonder if the original plates were kept when the car moved across country? The front plate has a dealership frame on it from Fred Hudkins of Palo Alto, a city on the peninsula south of San Francisco. From what I've read, Fred Hudkins had three dealerships in the Bay Area, but he sold Chrysler products. So this car may have once come through their inventory as a used vehicle. There is also a 1959 registration sticker on the front, which is curious to me as such stickers only go on the rear. Perhaps the plates were reversed when the car was moved back to California and re-registered, so that the original sticker wouldn't be covered? I'd love to learn more about its history. 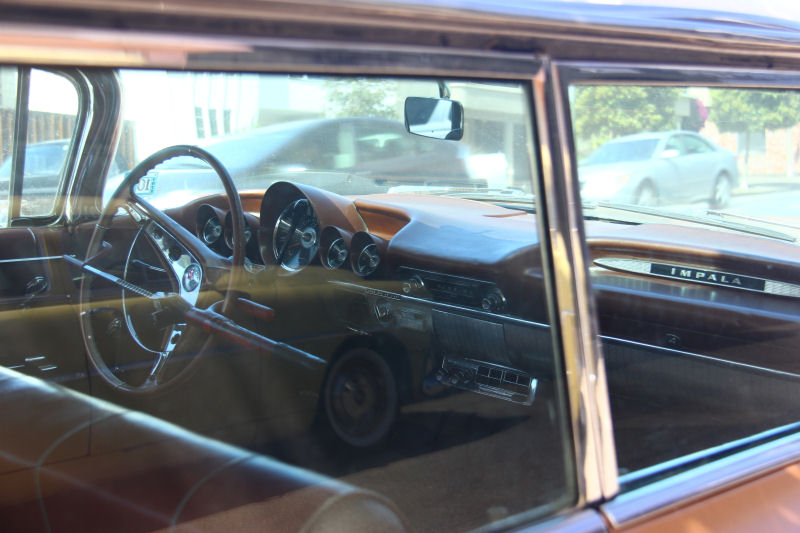 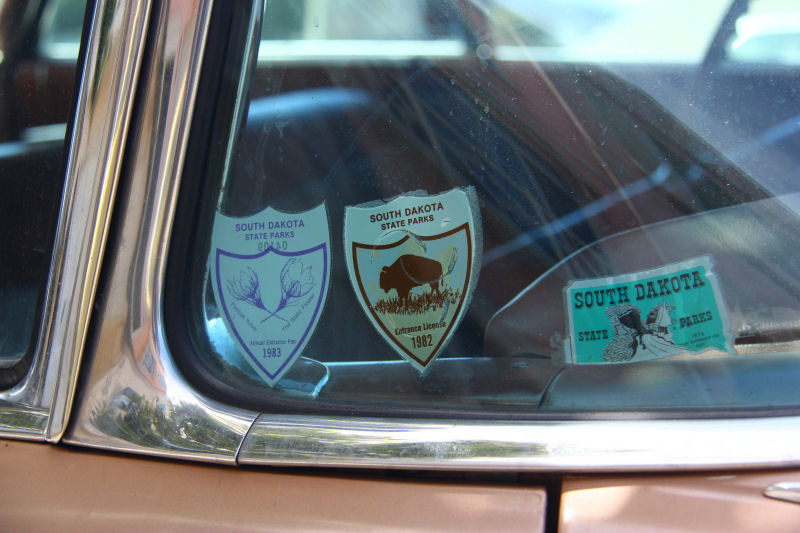 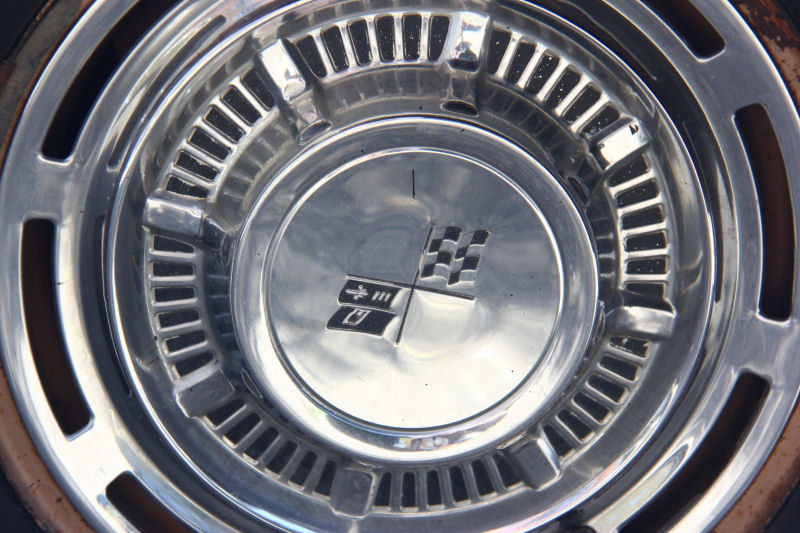 I had a good time photographing this car. It has a ton of great angles and details. And like so many of Fifties Guy's other cars, it's just a wonderfully honest survivor.