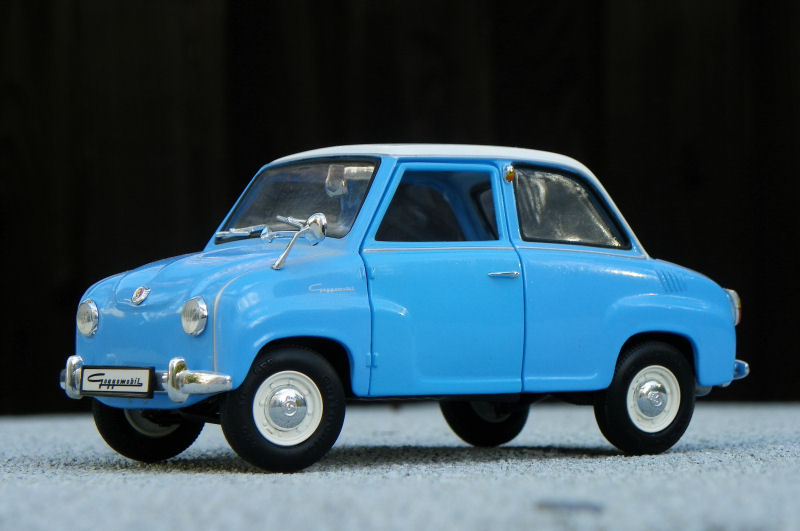 I went through a phase a few years ago where I started speculating on diecasts, bidding on items I thought were a bargain that I might resell later on. Of course, I never did resell them, because I tend to get attached to things. One of my late-night eBay finds was this little oddball, a Glas Goggomobil T 250 by Revell. Growing up, Revell was that company that made plastic model kits and NASCAR racers. I didn't know they made 1:18 scale diecast display models, because when I was young that was Maisto, Bburago and ERTL's territory. I didn't even know there were other manufacturers out there. Revell has two distinct flavors in their diecast offerings. They have an American series, which handles the NASCAR stuff and cliched Mustangs, Corvettes and Thunderbirds. Then there's the German Revell arm, which makes a fascinating range of European cars from the Borgward Isabella to the Volkswagen Corrado and everything in between. If you need a replica of an obscure automobile from mainland Europe, they probably made it. Some of their offerings are limited to the European market in small quantities and thus are quite rare and expensive in America. 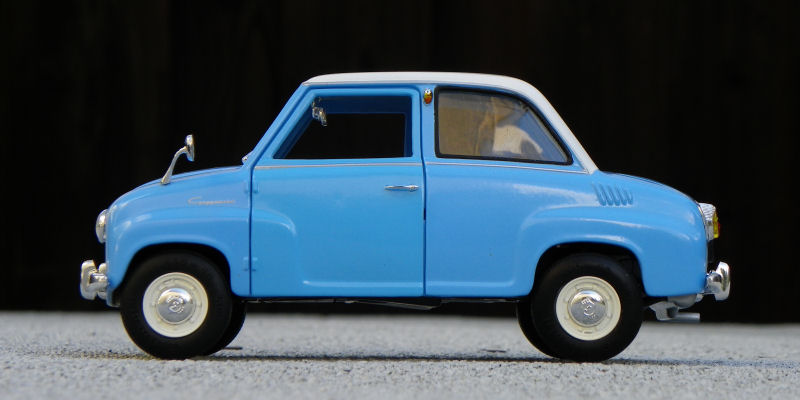 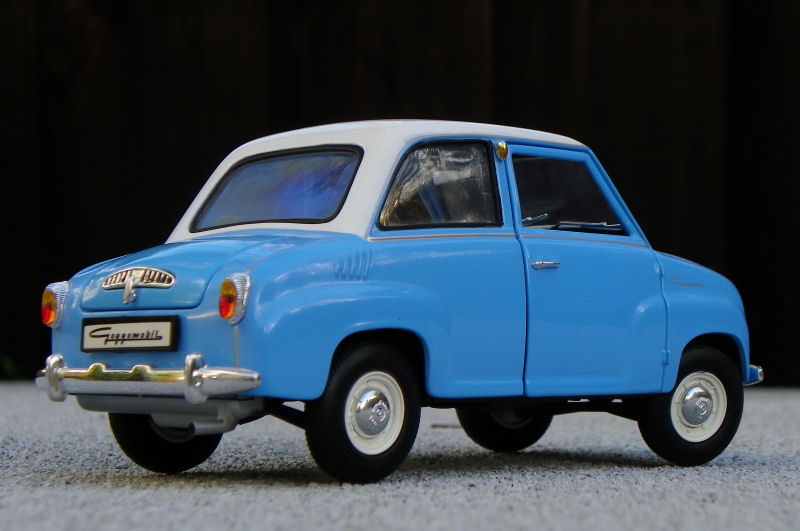 My first experience with the Goggomobil (and Revell diecasts) was when several red ones showed up on a shelf at my local BigLots! discount store for $12.99. The year was 2001. At the time I thought the car's name sounded stupid and it looked funny. I went home with a Bburago Porsche 996 Turbo instead. Fast forward eight years and I found a blue Goggomobil on eBay. It had a cheap starting bid of under ten bucks and looked new, because it was in a box. I bid on it. I won. Nobody else bothered to bid on the silly little car. 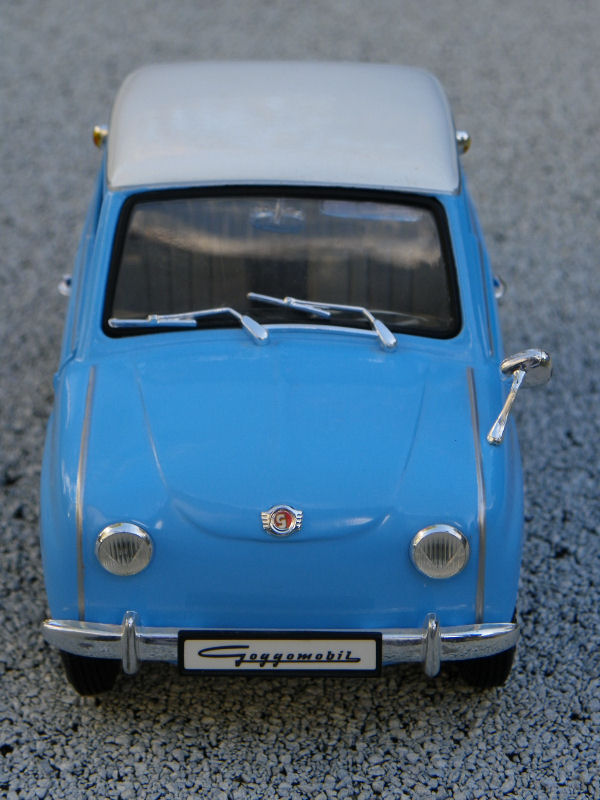 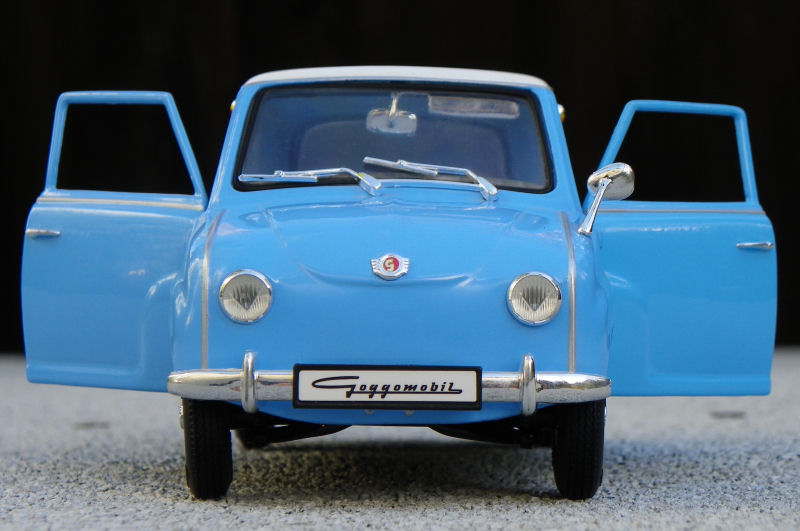 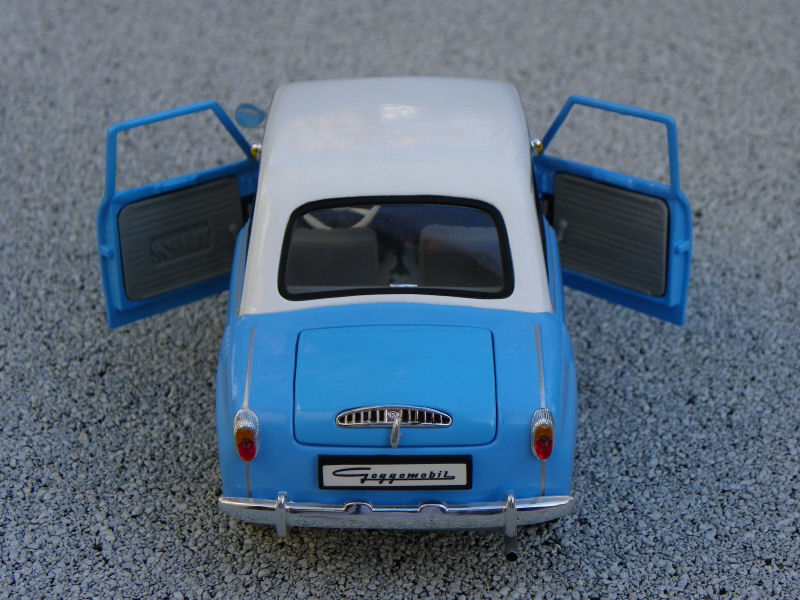 Well, the car wasn't new. It had been opened and displayed which was evident from the sheer amount of dust inside the box. Just as well; the car cleaned up fine. It turned out to be a first edition from 1998, a replica of a 1964 or newer car with the conventional front-hinged doors.
The Goggomobil was a line of small cars by Glas in Germany, and the T 250 sedan was the smallest displacement model. The 250 referred to a rear mounted 245cc air-cooled two-stroke, two-cylinder engine producing just under 14 horsepower. The car was spartan transportation for the masses, but it featured four wheel independent suspension with swing axles (probably the cause of the car's amazing positive camber), an optional pre-selector transmission and roll-back fabric sunroof. The Goggomobil T series was built from 1955 to 1969. 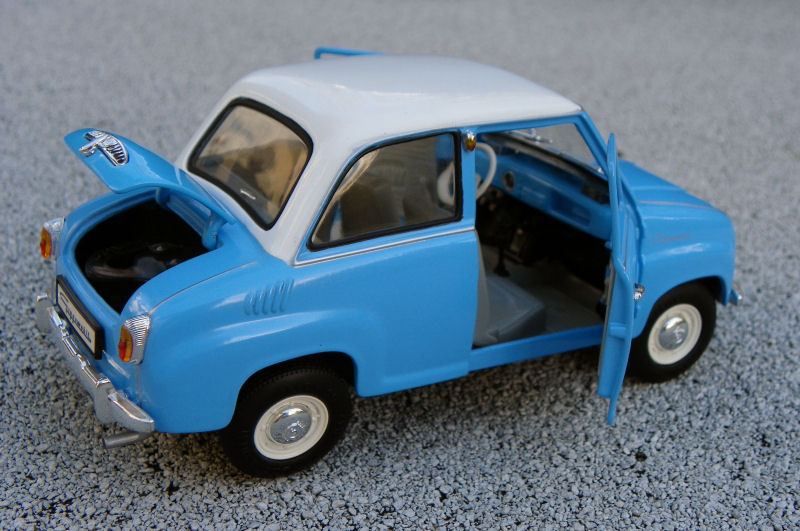 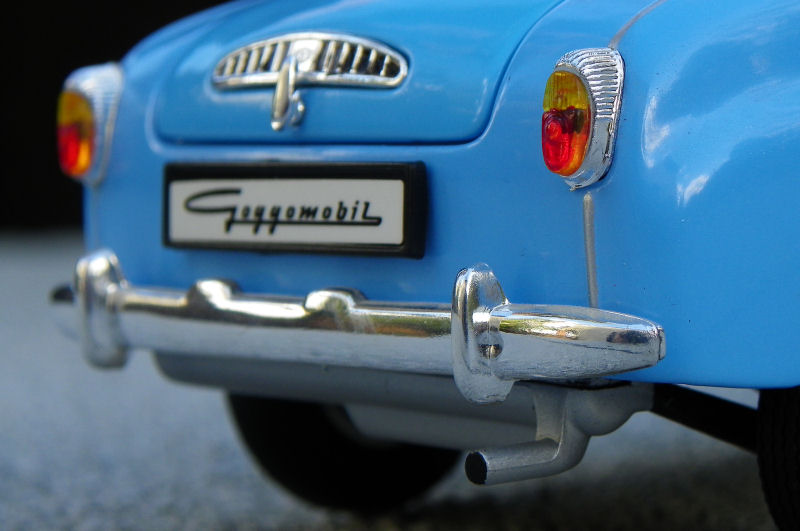 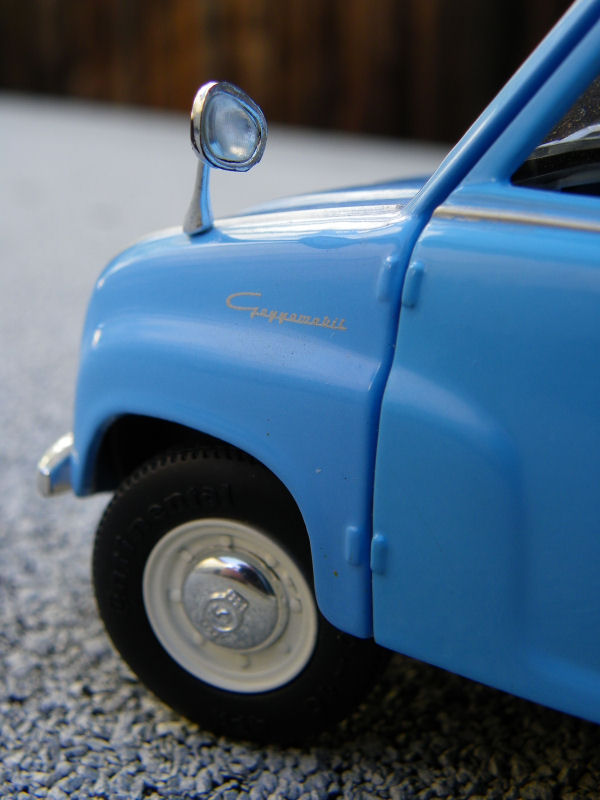 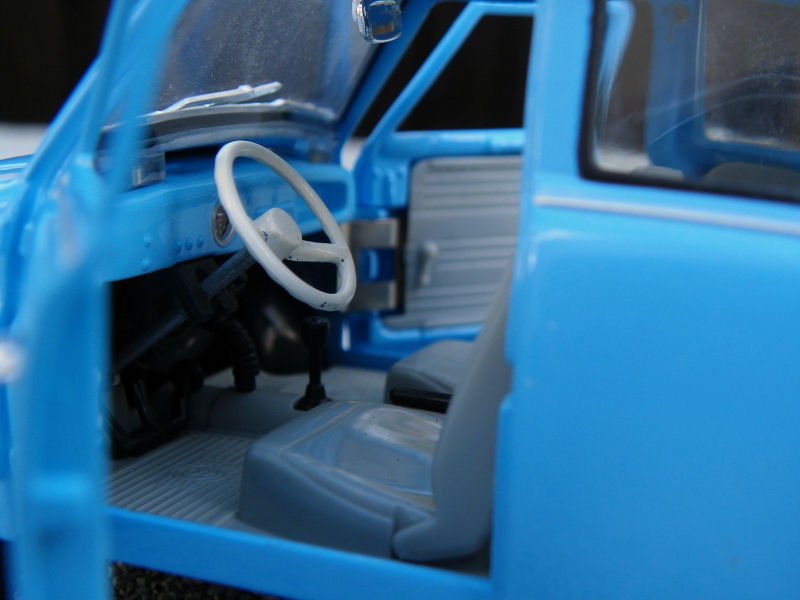 The Revell diecast is fairly basic in its details, which can mostly be forgiven because it is a replica of a very simple car. The body details are quite accurate, though the driver side mirror appears a bit large. Inside, the interior is plain shiny grey plastic and flat black with a body color dashboard. The white steering wheel is correct, as is the single storage pocket in the driver side door. Oh yeah, and the single gauge is also accurate. 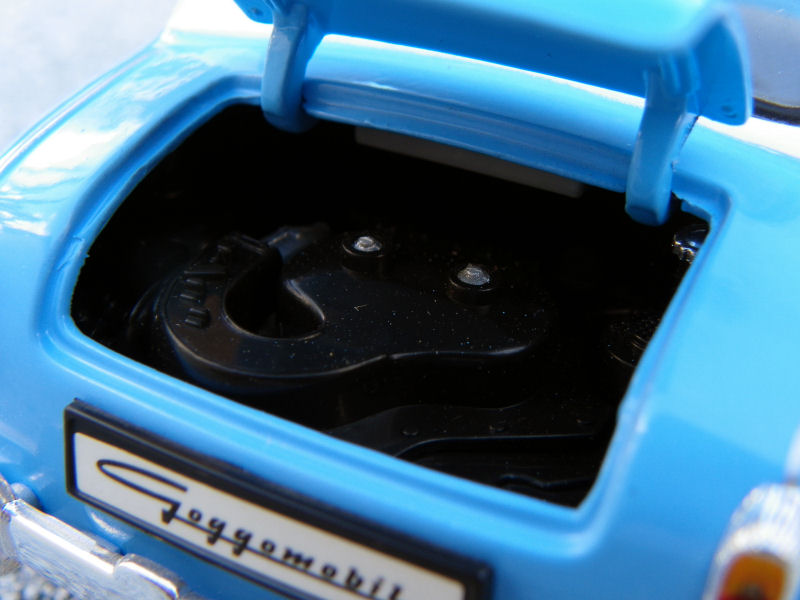 The car's shortcomings, fittingly, are in the engine compartment. The little two-cylinder is very sparsely detailed. The engine is missing its two spark plug wires, a battery and all the electrics. It comes off looking like an abstract portrait of an elephant. The engine cover hinges on a real Goggomobil are dainty little things set closer to the middle than on this model, but that can't always be helped when dealing with scale models. If you cast the hinges too thin they'll break. Another gripe I have about the car is that there is no working suspension. I imagine it would have been difficult to make a working swing axle with coil springs in a model at this price point. 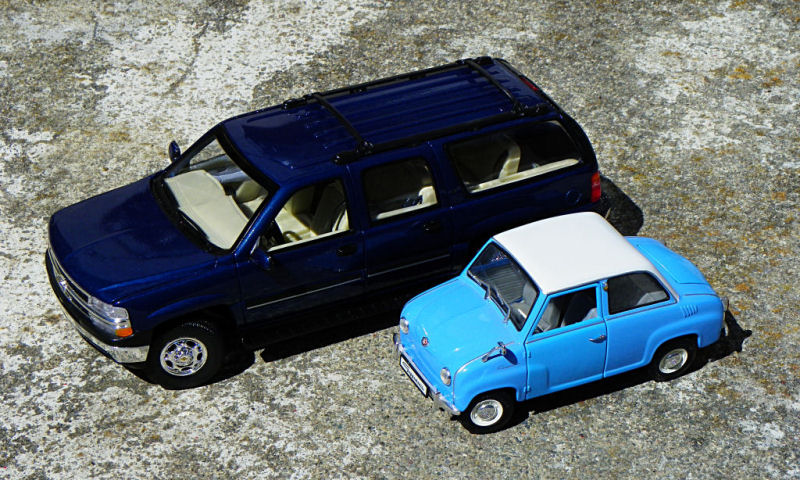 Perhaps the main reason why I picked up this car is because it's so tiny. The real car has 10-inch wheels and is only 114 inches long. My Welly 2001 Chevy Suburban dwarfs it. The real-life Suburban's wheelbase is longer than the entire Goggomobil by over a foot. It's an interesting commentary on evolving tastes and "needs", a little bare-bones car for the common German family of the 1960s and a hulking SUV for the common (some would argue otherwise) American family of the 2000s. Both would probably haul the same number of people a day on average. But I digress.
The Glas Goggomobil is a fun little novelty to have on a shelf with fellow European compacts (Revell makes lots of them) or as a contrast with a ridiculously big American car. It's cute, relatively affordable and available in several colors and a few casting and trim variations.
Posted by Jay Wollenweber at 12:00 AM