My love of the Ford Falcon does not always extend to its Mercury Comet cousin. The Comet had some iffy model years, but so do many models. For 1965, Mercury stylists worked pretty hard to differentiate the Comet from the Falcon, and they pulled it off. Whether the full package is attractive is open to debate. However, I do like certain angles of it, and it looks more modern than the '64 which was trying to be a Ford, Lincoln and Mercury all at the same time. The profile has a racy, forward-leaning look while remaining Falcon-practical for family use. The '65 adopts the stacked headlights that became so fashionable in the industry around that time, and in lieu of the Falcon's big round taillamps the rear features a narrow horizontal strip with little rectangular lights in it, beneath a heavy-looking rear panel. It also features more deeply sculpted sides that as far as I can tell, serve no purpose except to enable Ford to use Falcon doors on both cars. The Comet has a stout, mid-size look to it that makes it appear larger than the compact Falcon, though under the skin the two cars are very similar. 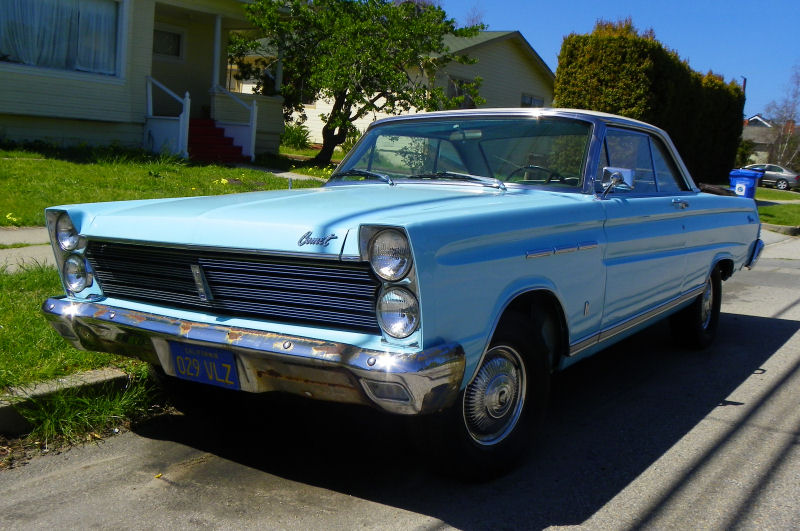 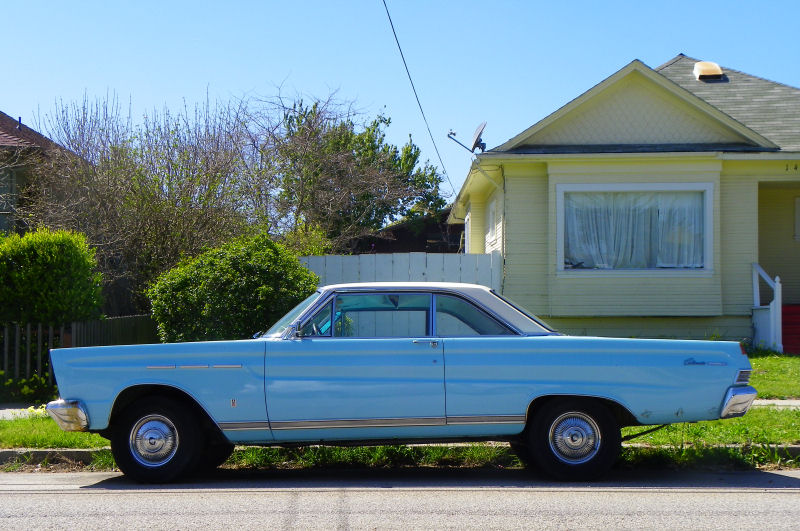 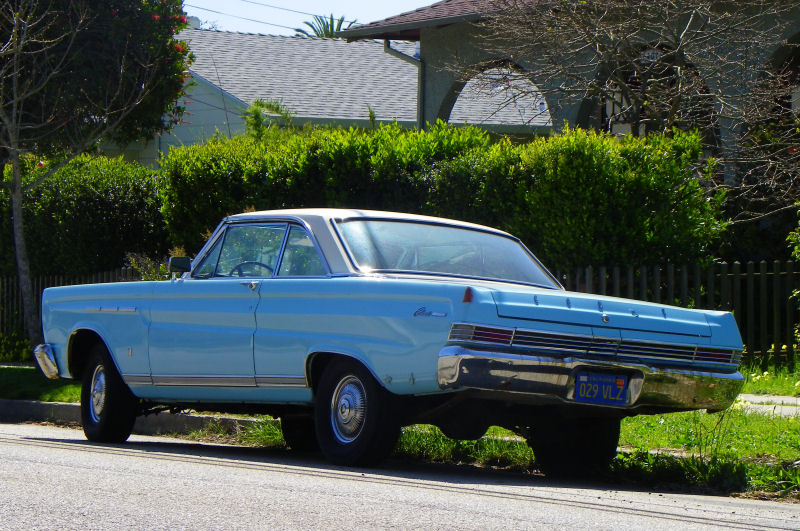 The Comet is like the Falcon on California Streets in that I've been trying to "collect them all", as it were. To date I've featured a 1961, 1962, 1963 and 1964 Comet (as well as a 1961, 1962, 1965, 1966 and 1968 Falcon, 1962 Ranchero and two 1963 Falcon Club Wagons). So it seemed natural to stop and photograph this nice little blue '65 Comet Caliente coupe when I was exploring a part of Santa Cruz I'd never been through before. In short, I was lost. But I tried my Canadian friend's technique of making random turns until I discovered something interesting and it paid off.
The Caliente was, as its name suggests, a hotter version of the Comet (the Cyclone was the proper performance model). Packing a 289 V8 out of the Mustang, it was pretty much the basic formula that would become the Mercury Cougar in 1967. The Cougar was a slightly bigger, more luxurious Mustang with unique styling. Indeed, the Comet itself would grow to a midsize car for 1966, based on the larger Fairlane. 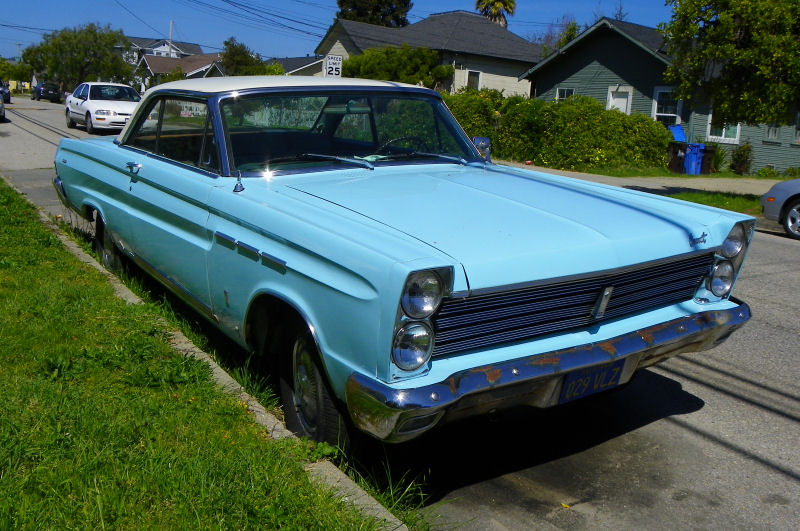 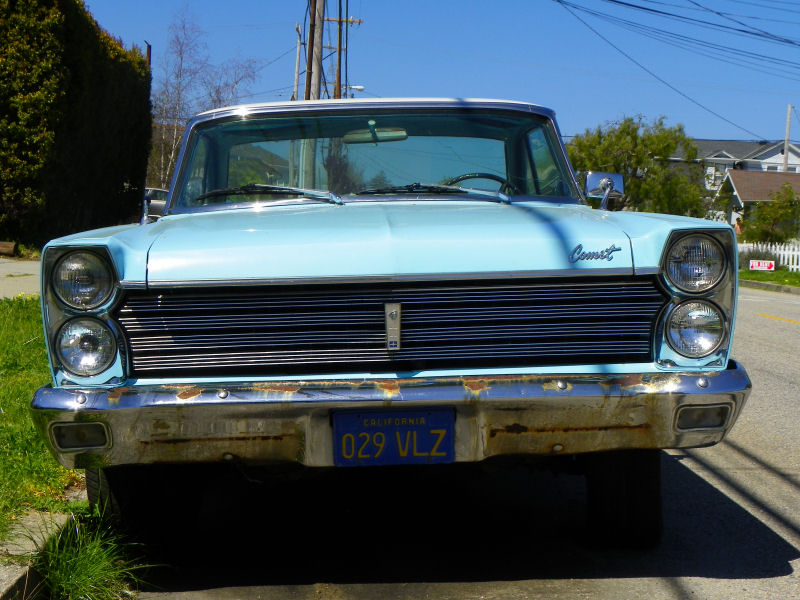 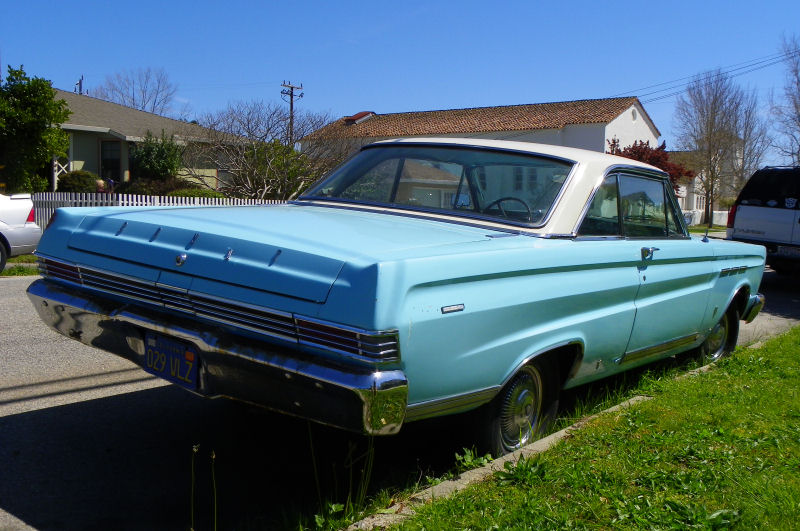 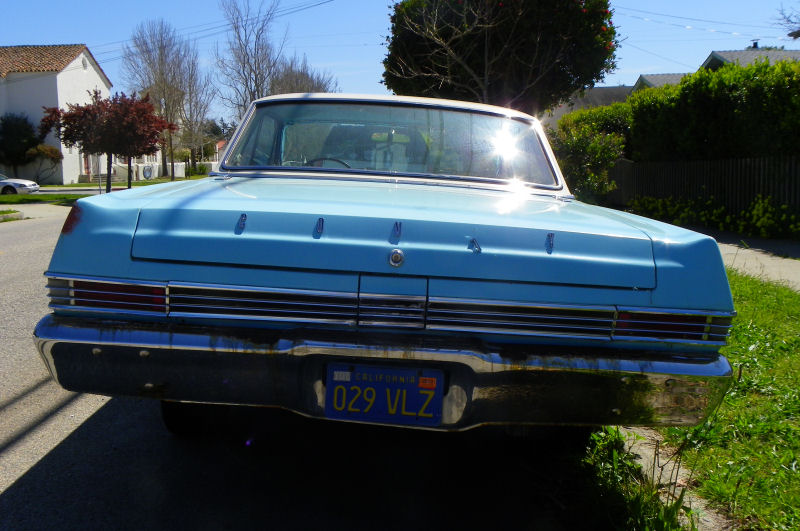 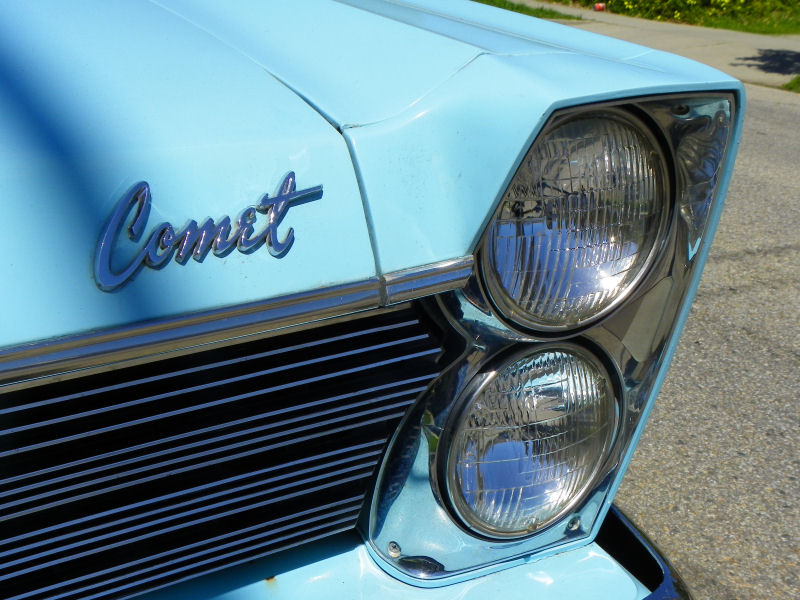 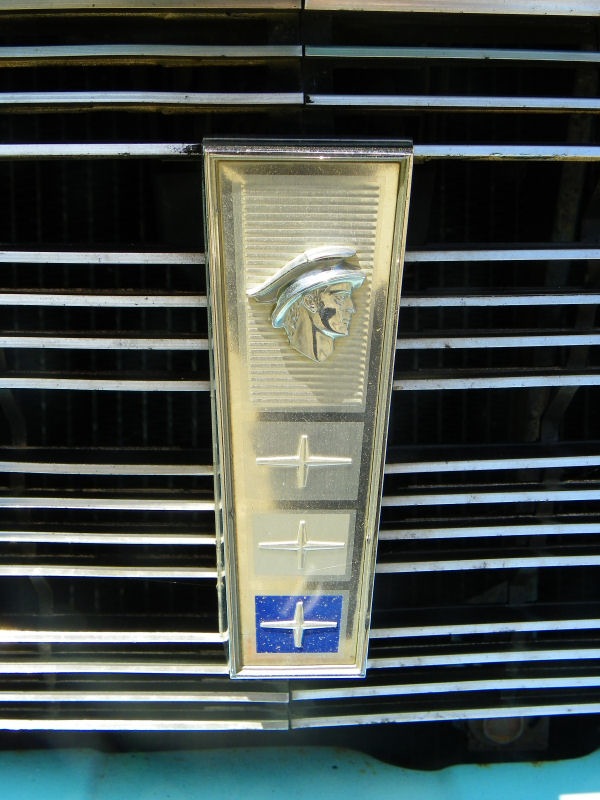 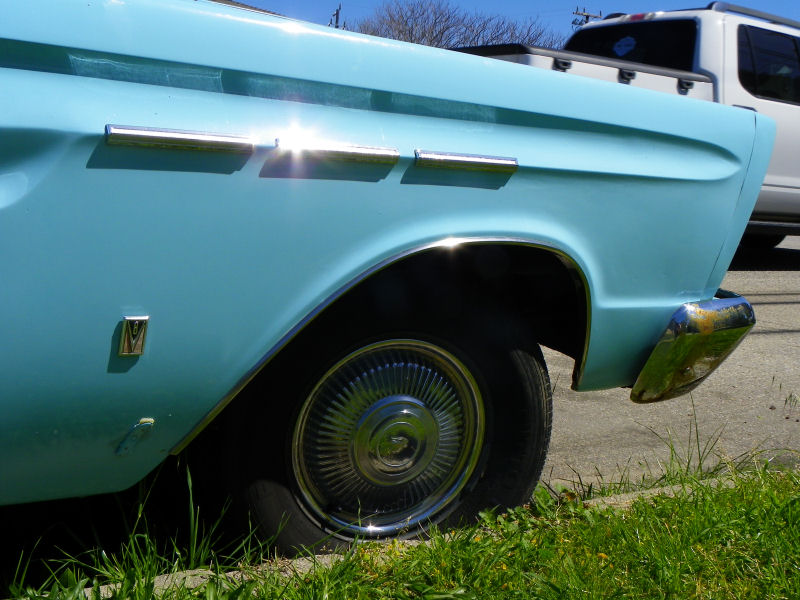 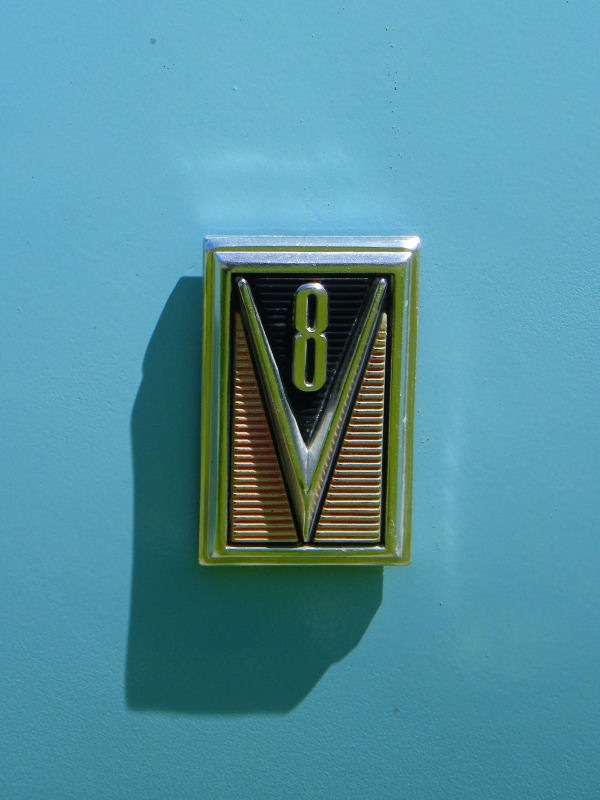 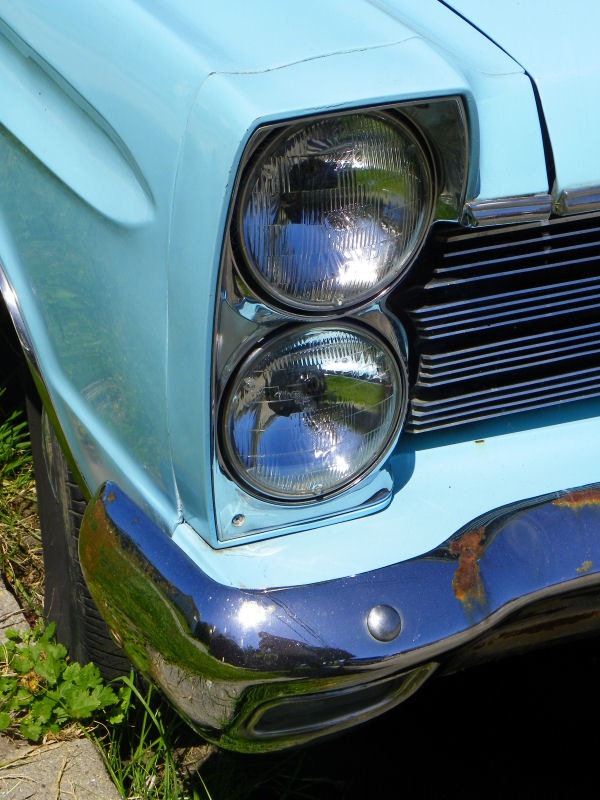 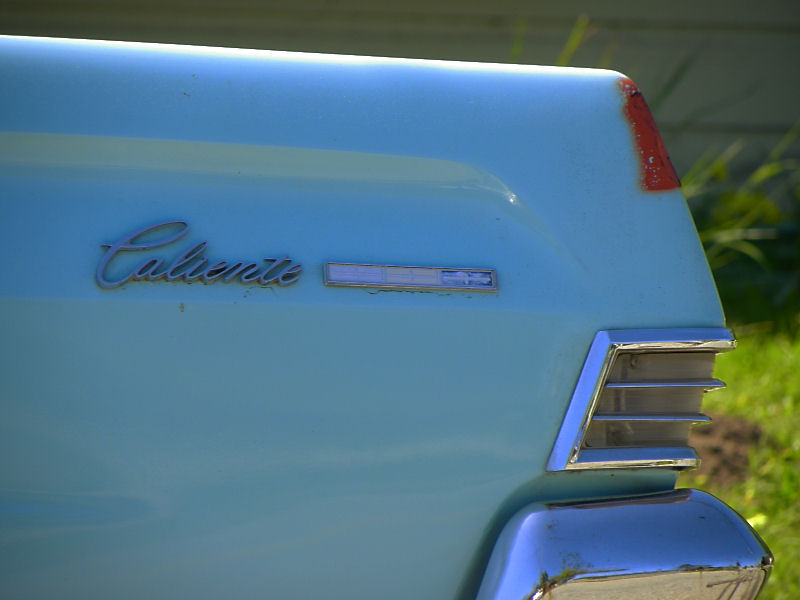 This Comet is a decent driver and a pretty good twenty-footer. Up close it becomes more evident that trim is missing, the bumpers need to be rechromed and the fetching light blue paint is most likely not original. I didn't snoop in the interior, but I can see from my photos that the headliner is shot. These are cool little cars and make good budget muscle for people who can't afford a Mustang or just want something different. It would be great to see this one benefit from a little reconditioning. The last Comet Caliente I saw before this one was also in Santa Cruz, a beautiful turquoise '65 convertible rolling on Magnum 500 wheels with white-letter tires. Before that, I only recall seeing a '64, and it's still sitting abandoned in a field just outside my town with the engine bay full of junk and the roof crushed in. This Comet looks downright pristine in comparison.
Posted by Jay Wollenweber at 12:00 AM