It's been four years since I began documenting the collection of the San Francisco car collector I like to refer to as Fifties Guy. To date I've photographed over a dozen cars belonging to him or his friends who might share his hobby. Many of the cars have been sold over the years, and new ones appear as time goes by. The most recent one I've seen as of the time of this writing was this 1960 Ford Thunderbird. My friend and I were exploring the city after the California Mille car show and, as I frequently do when I'm in the area, I decided to stop by and see if there were any members of the collection present in the public domain. 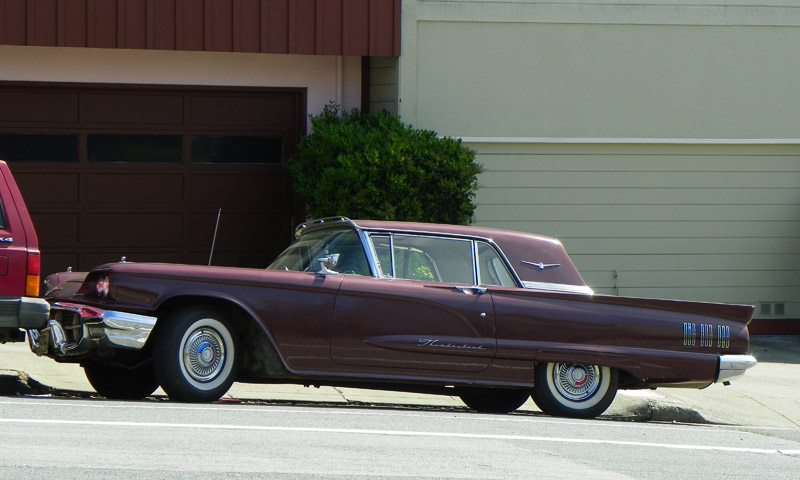 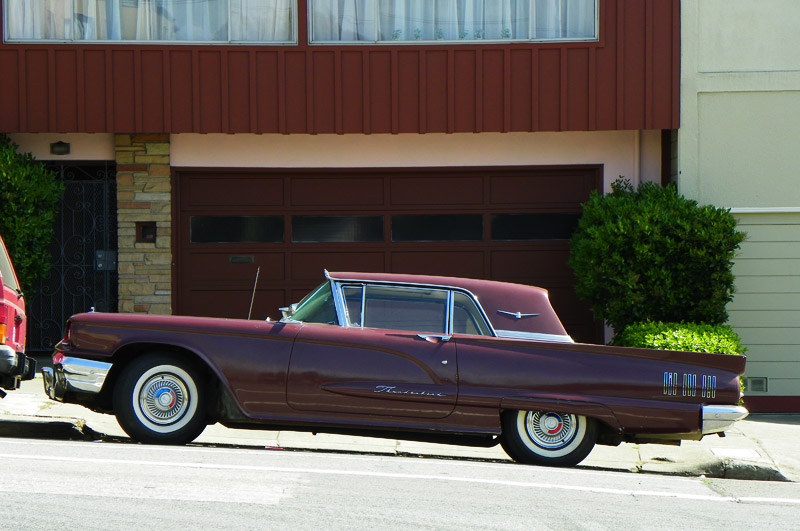 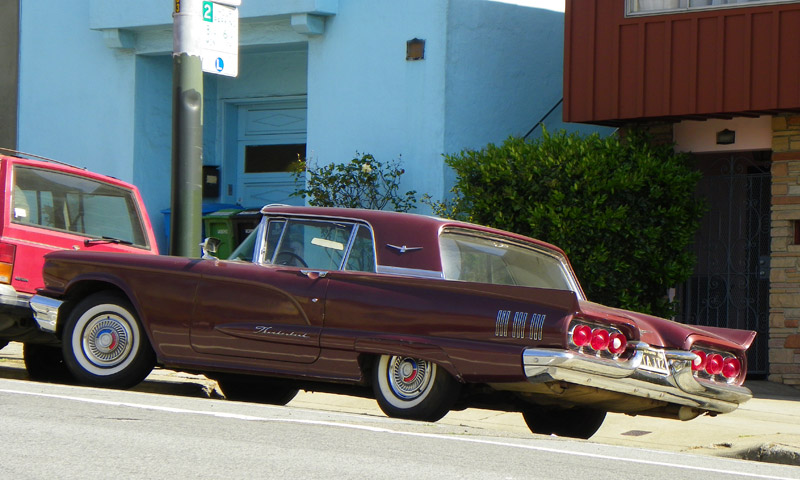 Ford's popular Thunderbird personal luxury car was completely restyled for 1958, shedding its sexy two-seat body for a larger four-seat body, nicknamed the Squarebird. This new car received minor refreshes each year until another new T-Bird arrived for 1961. The 1960 model can be identified principally by its three vertical grille bars and six round taillights. Previous models had four. This T-Bird came with a 352 V8 and three-speed manual transmission standard - a 430 MEL ("Mercury-Edsel-Lincoln") V8 and/or three-speed automatic were optional. Fifties Guy has interesting taste in cars and tends to collect rare variations of popular models. This car is no exception. It's a rare "Golde Edition" equipped with a sliding metal sunroof supplied by Golde & Company of West Germany. Out of 92,843 1960 Thunderbirds, only 2,536 were built with this option. If this car also has the 430 engine, it's one of only 377.
This one is in pretty good shape for its age, a longtime Bay Area car apparently purchased used at one point in the mid-'60s through Lou Fox Studebaker Inc. at 2555 Shattuck Avenue in Berkeley. The dealership today is the used car lot for Berkeley Toyota. The paint may not be original, I really don't know. It's held up quite well except on the hard edges like the end of the tail fins. All trim is intact and present, even the little clear plastic ornaments on the front fender tops and the metal air deflector above the windshield, designed to keep wind noise and vibration out of the interior with the sunroof open. 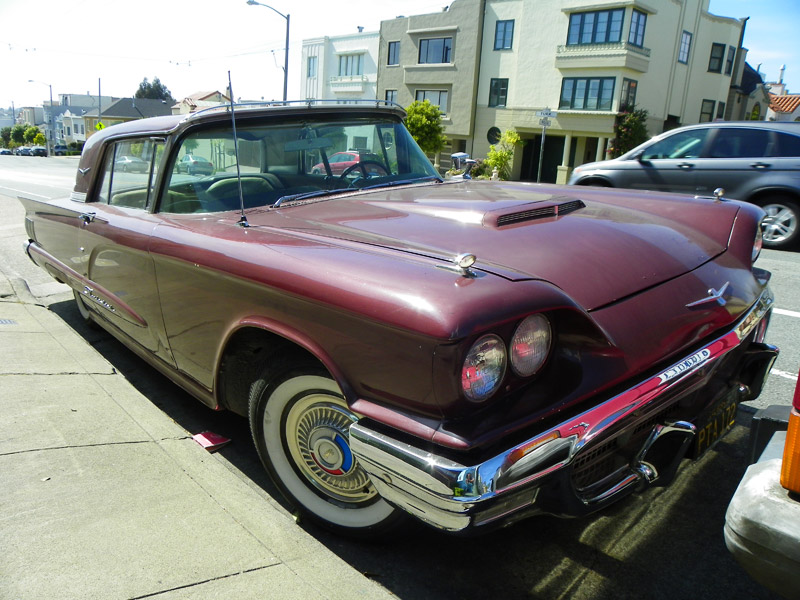 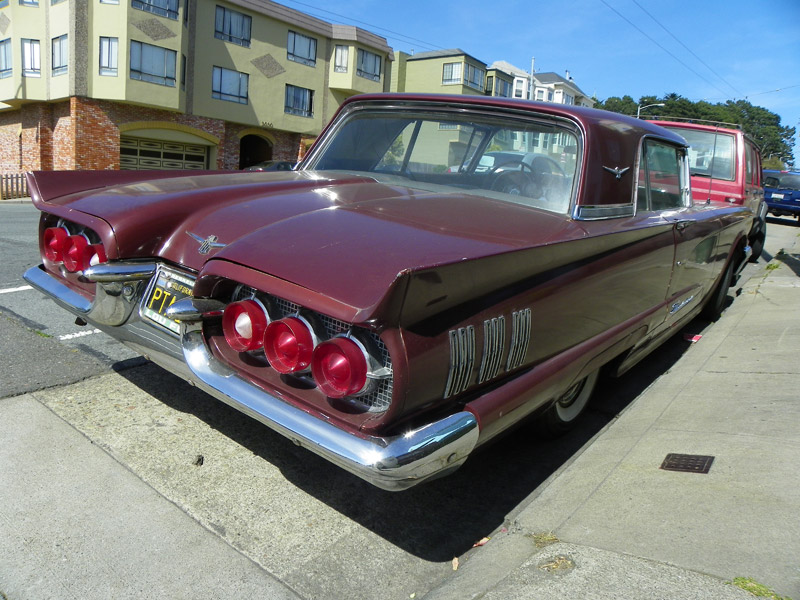 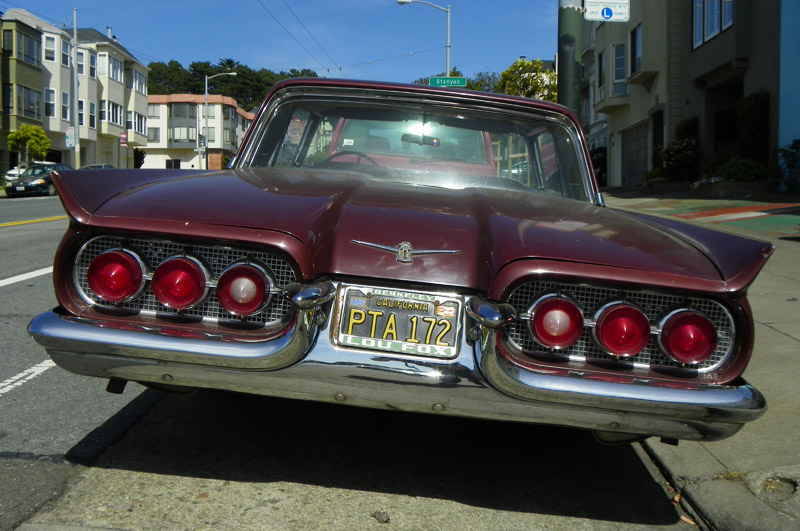 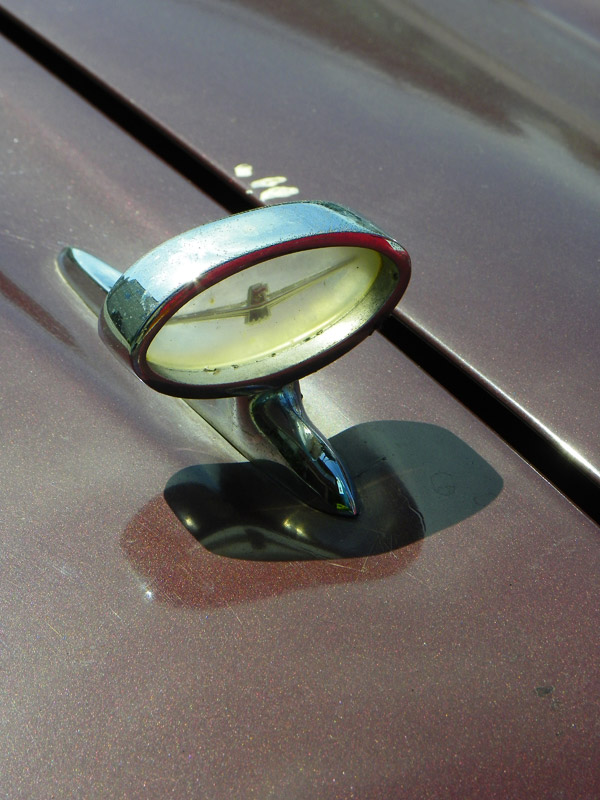 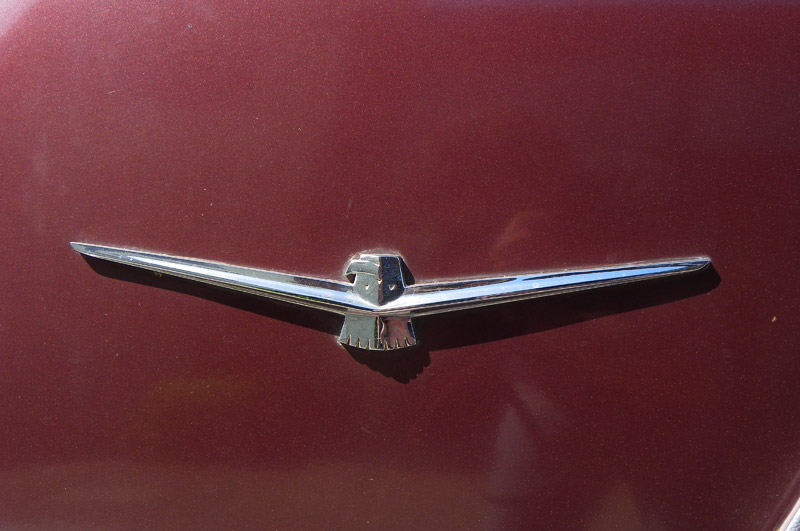 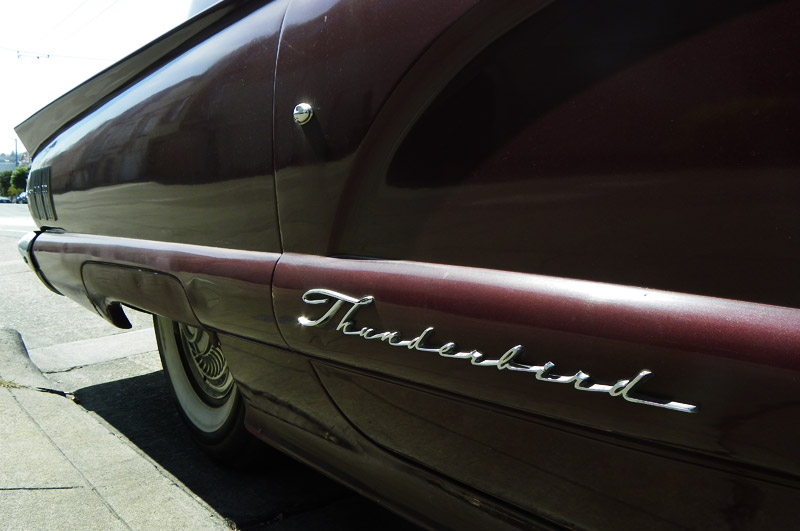 I've never really liked the '58-'60 Squarebirds, but in their time they were considered something special and sold well. This is probably due to their combination of practicality, power and restraint. The latter is relative, because it has a lot of styling gimmicks of the era, but it didn't fall victim to the finicky novelties that didn't function properly or didn't make sense in the 1950s like retractable hardtops, fuel injection and supercharging. All of these ideas are fairly commonplace now, but the technology was still new and unproven back then. The T-Bird was not a very good handler, but as a highway cruiser it excelled. Notice that in those days you didn't often see cars in commercials being thrown too hard into corners. They were usually shown rolling leisurely along in a straight line on one of America's relatively new freeways or on a lightly curved back road.
This sunroof Thunderbird is a rare piece of history, and I'm glad to see it's in good hands.
Posted by Jay Wollenweber at 12:00 AM