As a casual collector of 1:18 scale diecast models, I have accumulated an eclectic mix of brands and genres. Growing up I had mostly kid-friendly Maisto models, because I received one either every Christmas or birthday as a gift from my ex-neighbor, Jesse, who used to live next door when I was young. He was a grandfatherly old man who was good friends with my dad and acted like an uncle to me. After we moved away when I was four, he continued the tradition until around 2000 or so, when my parents asked him to stop buying models for me because I was running out of space. This Maisto 1999 Ford Mustang GT convertible, while not my favorite or rarest or best-detailed model, holds a special significance. It was the last diecast he ever gave me. Jesse's gone now, but the Mustang is a reminder of him and his generosity. 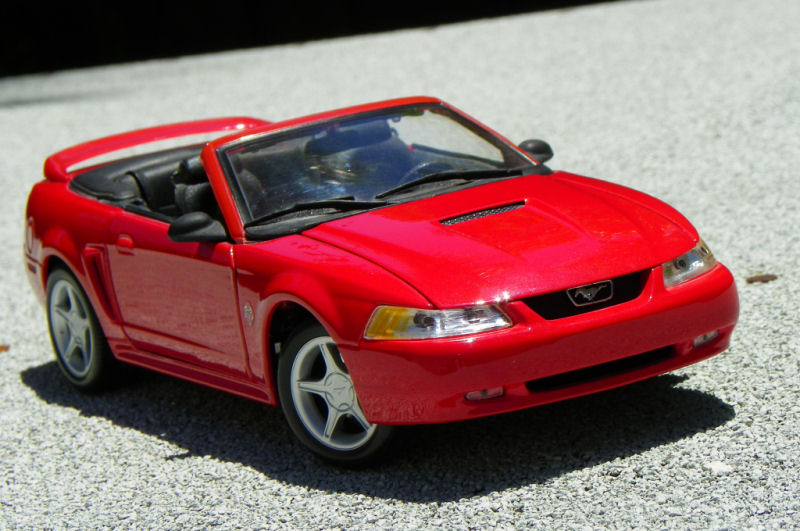 The '99 Mustang GT was one of those attainable fun cars that made a good toy when the real cars were hitting the streets. I actually never liked the 1999-2004 generation when they were made, with the exception of the 2004 Mach 1 special edition coupe. However, this 1:18 model is actually pretty good. 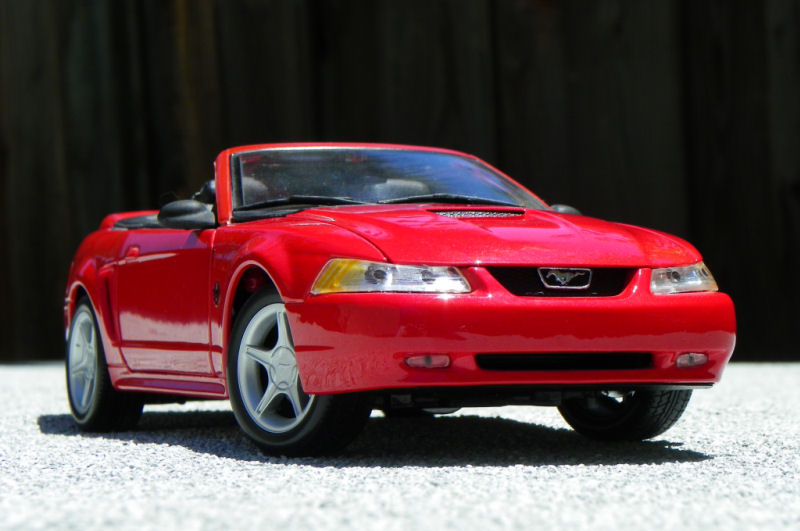 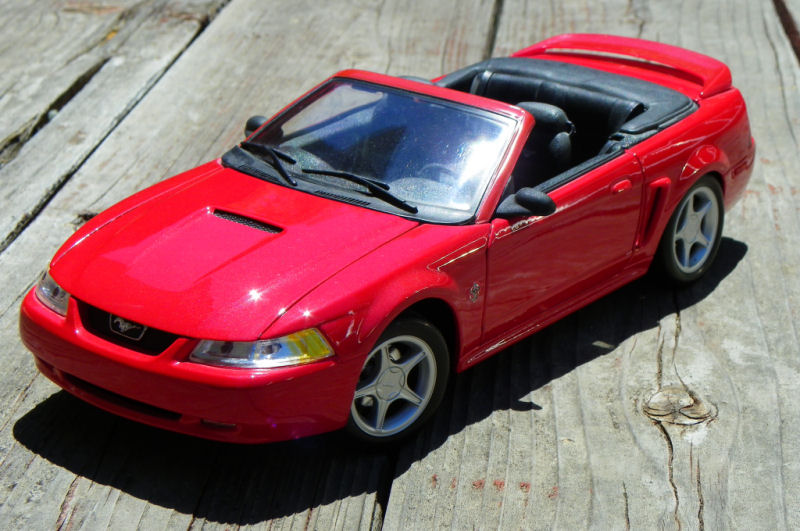 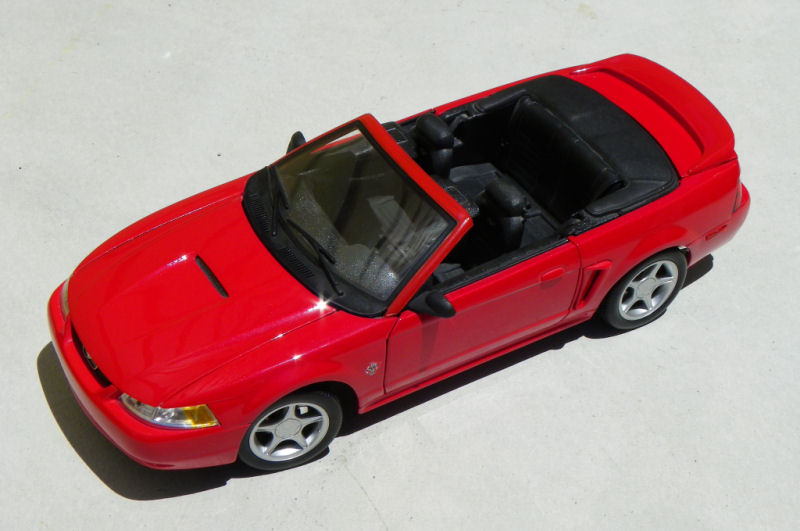 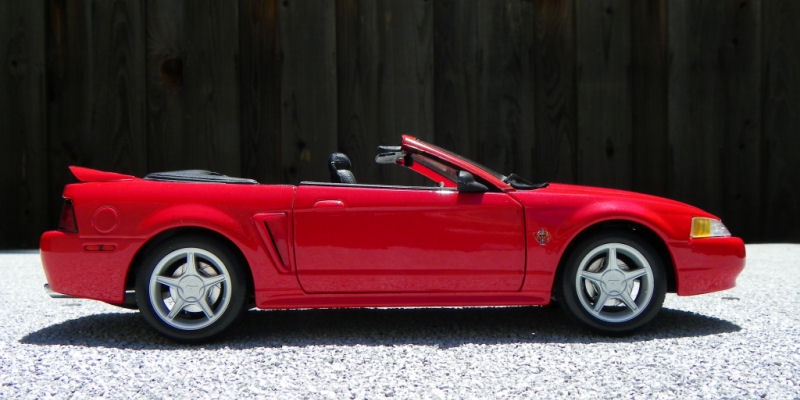 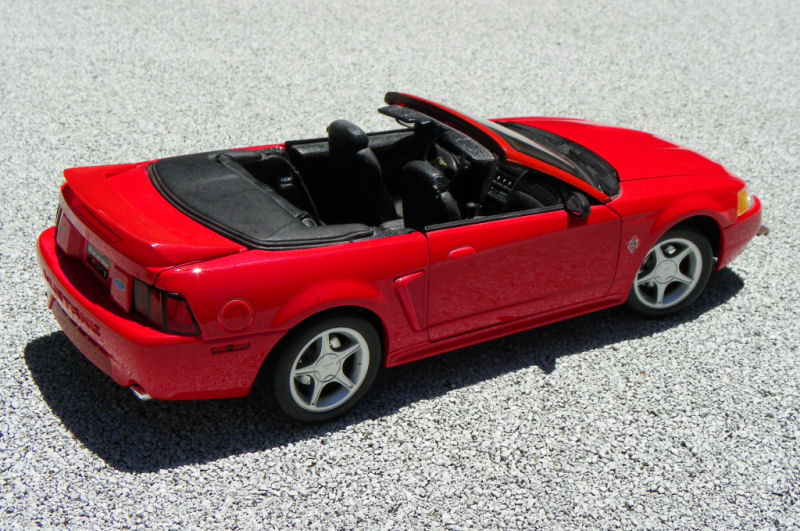 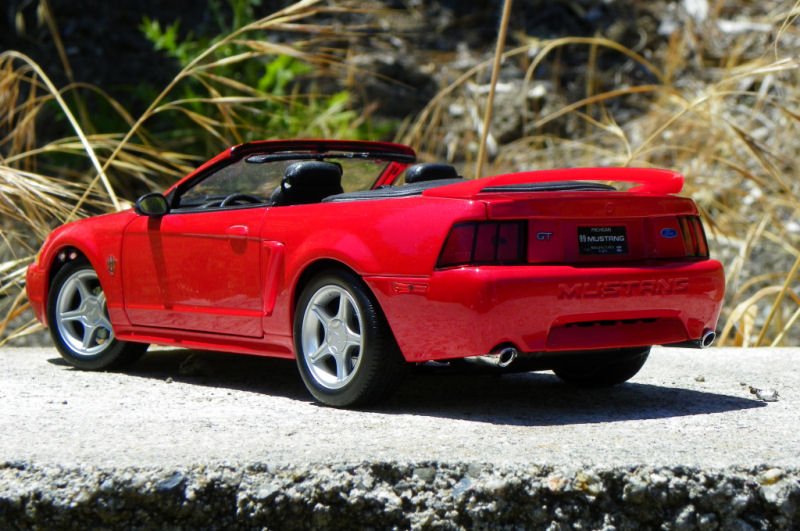 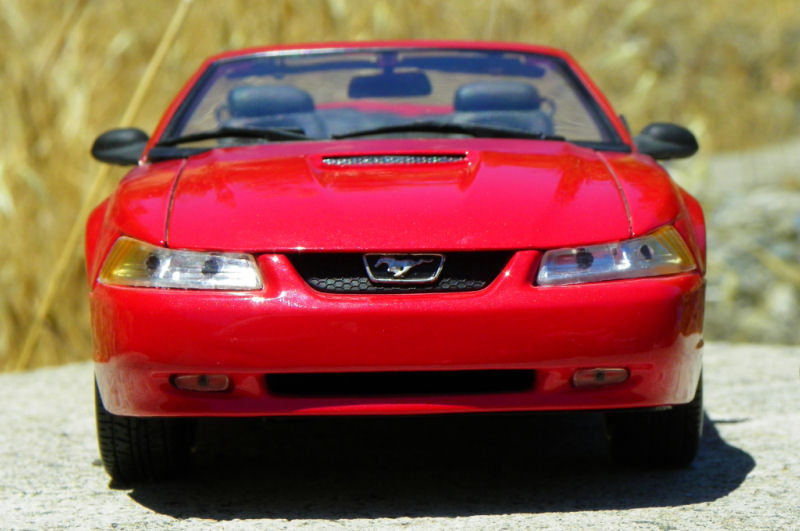 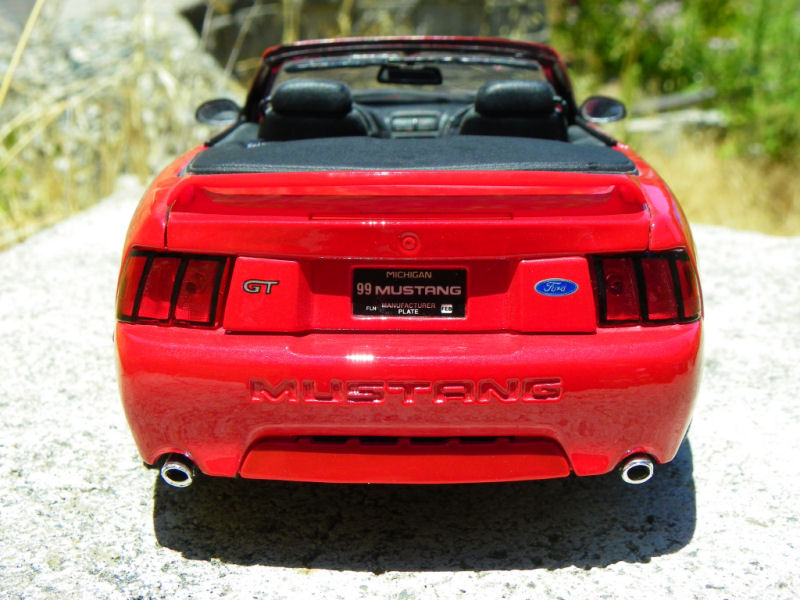 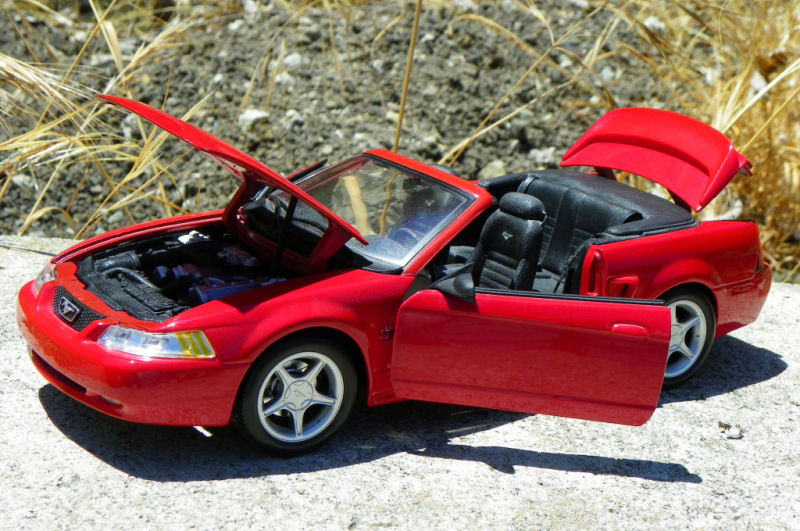 Let's start with the overall proportions. The body shape is accurate with no glaring omissions or mistakes in the casting. The 5-spoke wheels are the right size and shape. At a glance, the biggest issues seem to be that the horse decal on the steering wheel center is too large and the third brake light in the trunk lid appears to have been applied to the top rather than facing the rear where it would actually be visible if illuminated. That oversight always mystified me. Cost-cutting is easy to see on this car, but it's not without unexpected bonuses to offset them. The spoiler is molded red plastic and not painted, all of the lights have clearly visible mounting pegs, all opening parts have massive dogleg hinges and the tires have no embossed lettering. That said, the car has a full working suspension and even a prop rod for the hood. Another small detail I appreciate is that, while the paint appears to be a plain solid red in my photos, there is actually a tiny hint of metalflake to it in certain light. 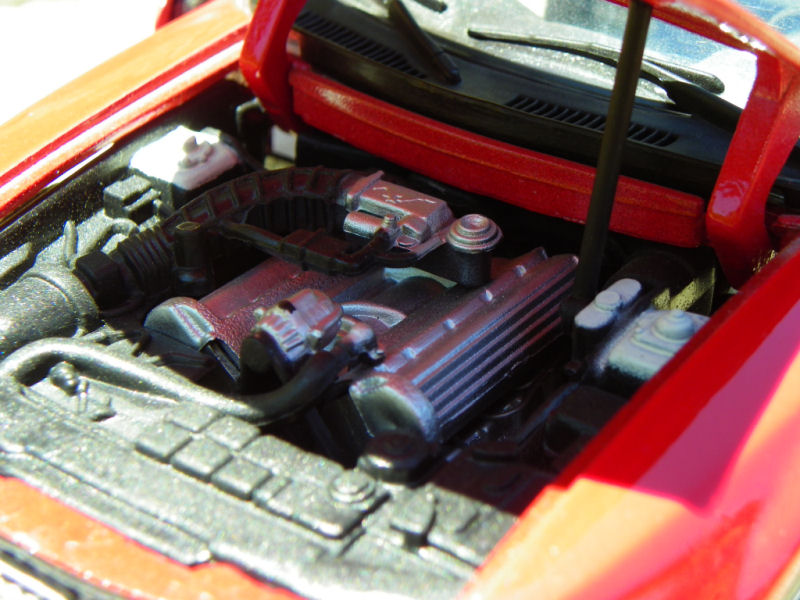 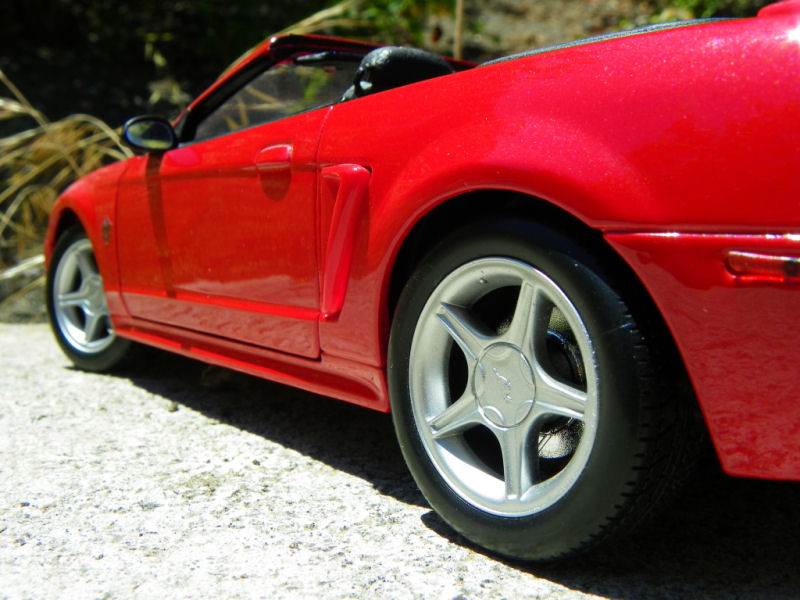 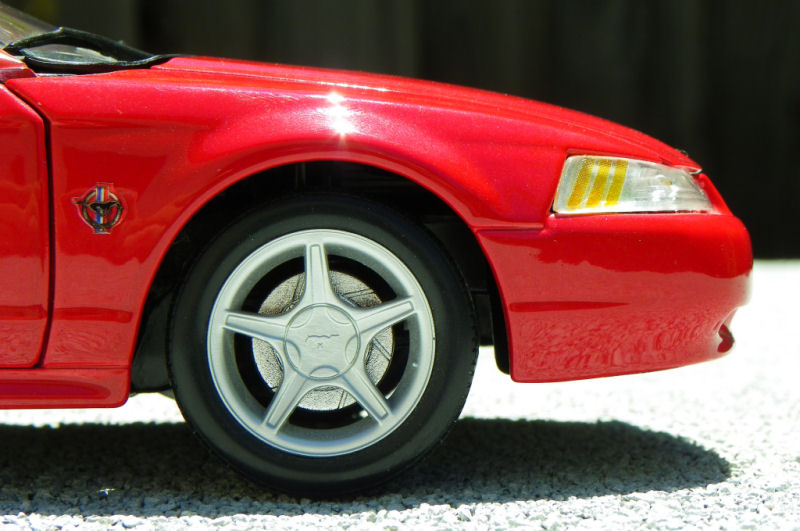 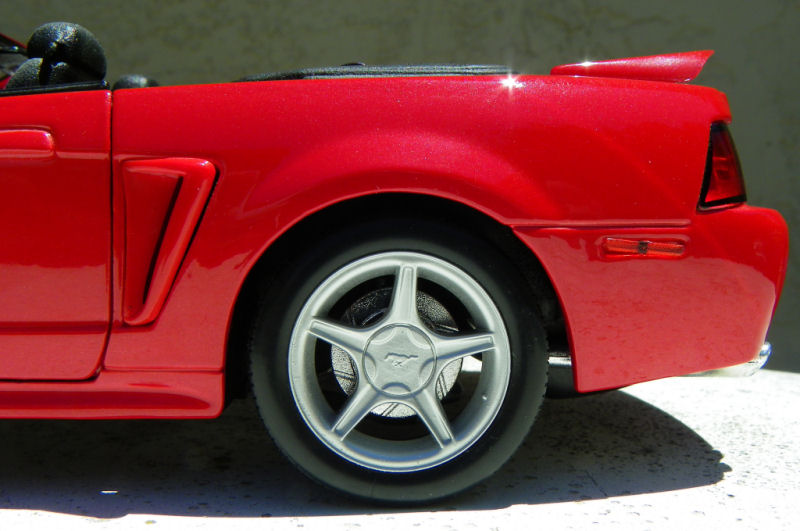 The interior is a bit of a mixed bag. The surfaces are covered in a weird texture that probably would look at home in the real car, but at this scale it just looks rough and unpleasant. The molded Mustang script on the passenger side dash and even the tiny embossed "SRS" on the driver airbag are good details, as are the painted HVAC and radio controls and four separate, flexible seatbelts and reclining front seats. Unlike some other two-door models, though, the seats do not fold forward very far to allow access to the back seat. 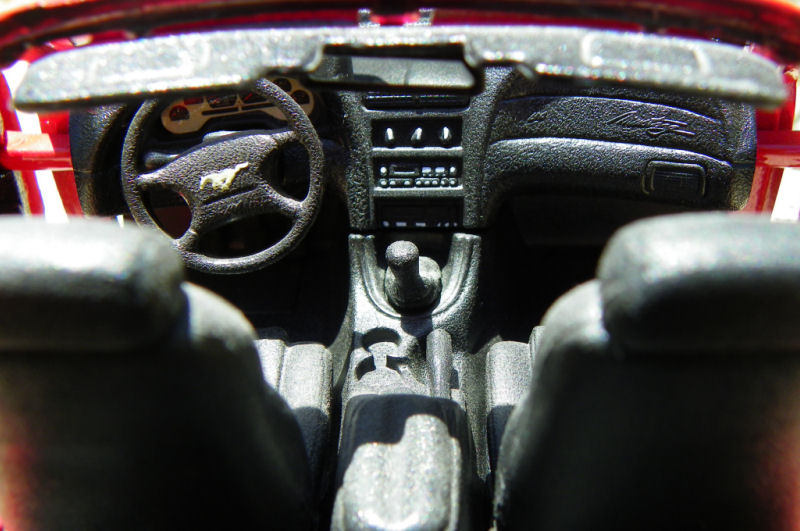 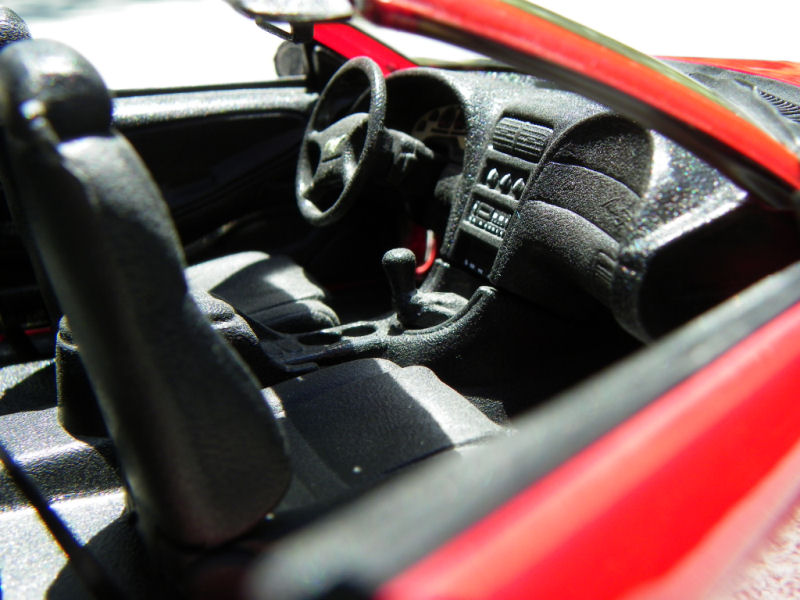 In conclusion, it's actually not a bad budget model. If you are considering a Maisto Mustang of this era, I recommend the convertible version. The coupe is made from the same body casting with a plastic roof that looks like it was cut off of the car and reattached, leaving a noticeable gap. The casting was later modified to create a 2003 Mustang Cobra as well.
I never wanted one of these Mustangs for real, rarely pay attention to the actual cars and likely wouldn't buy another Maisto diecast of one. I'm biased; I prefer the 1995 model and the completely redesigned 2005-09s. But I don't see myself getting rid of this one.
Posted by Jay Wollenweber at 12:00 AM