Fourth in my collection of San Francisco cars photographed and featured by both myself and by my friend Colin Stacy of The Automotive Way, is this 1972 Citroën 2CV4. 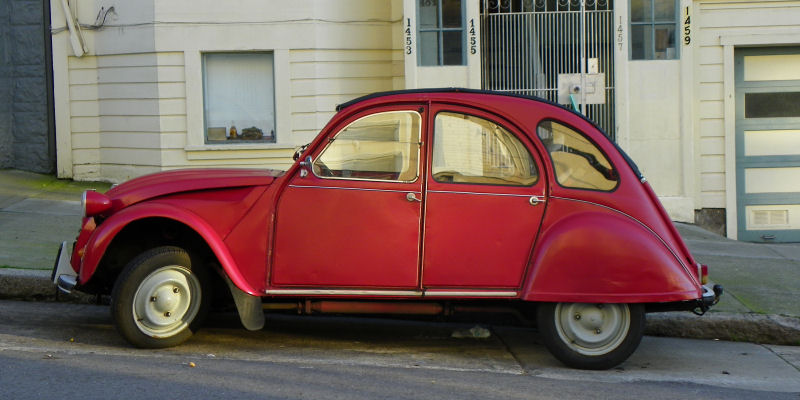 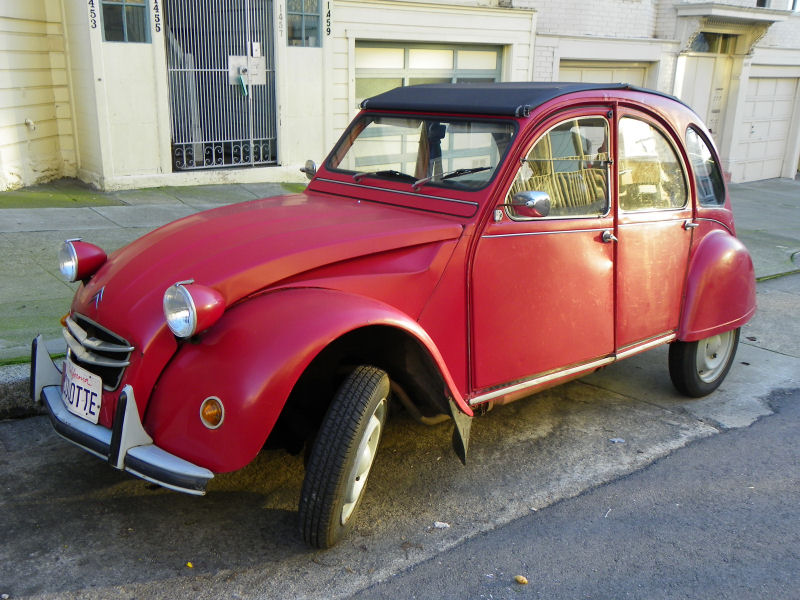 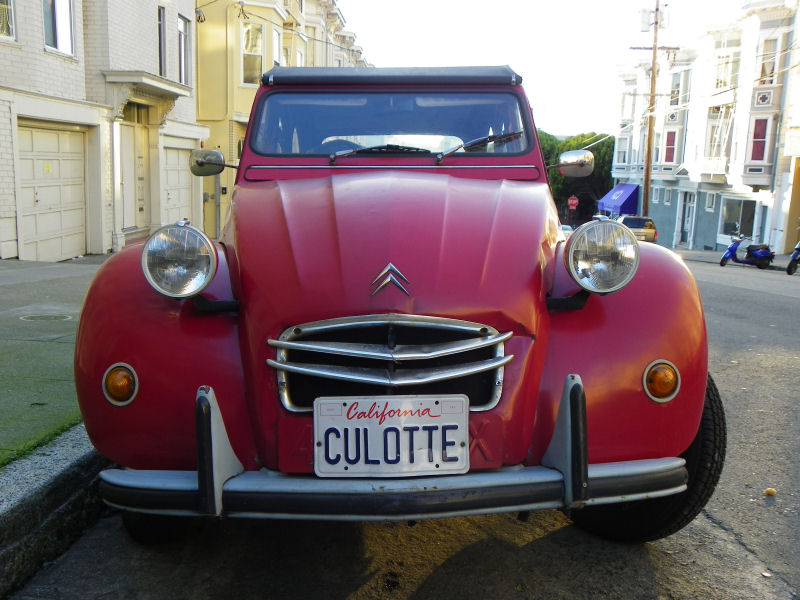 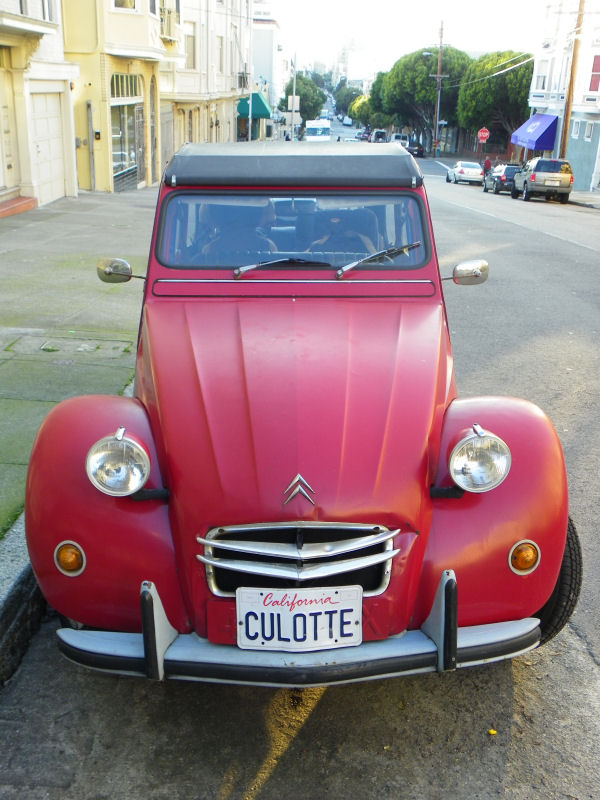 Regrettably, my knowledge of old European cars is sorely lacking. More often than not, when attempting to date an old Citroën I must lean heavily upon the crutch that is Cats-Citroën with their extensive resource of year-to-year design changes and production data. As close as I can tell, this car is post-1970, probably built before 1973. Three-point seat belts in the front make it a 1972 at the earliest unless they were added later by an owner; the 2CV4 badging on the rear is pre-'73. It's used as rolling advertising for Les Cent Culottes, a French lingerie store on Polk Street. 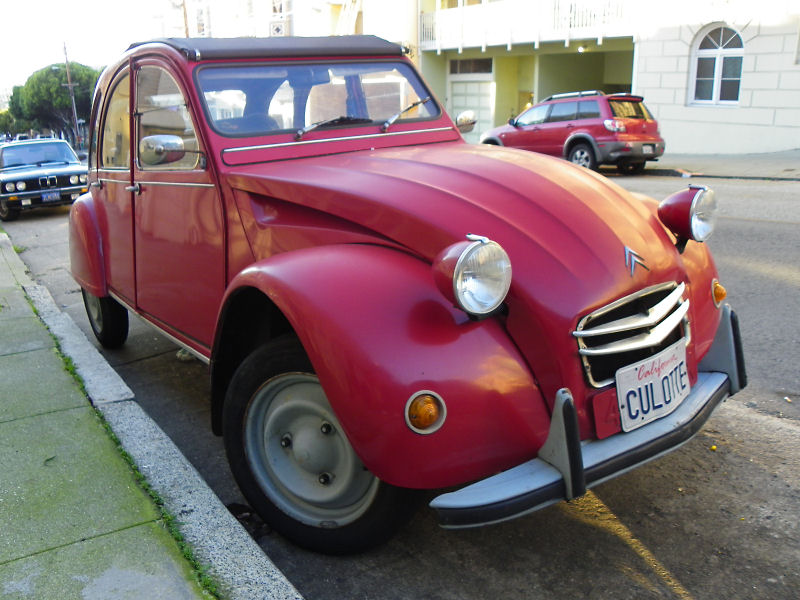 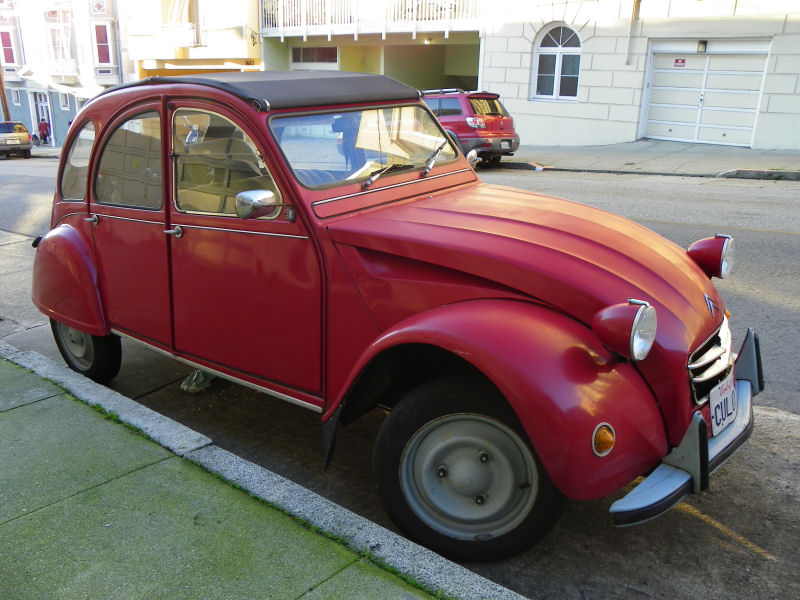 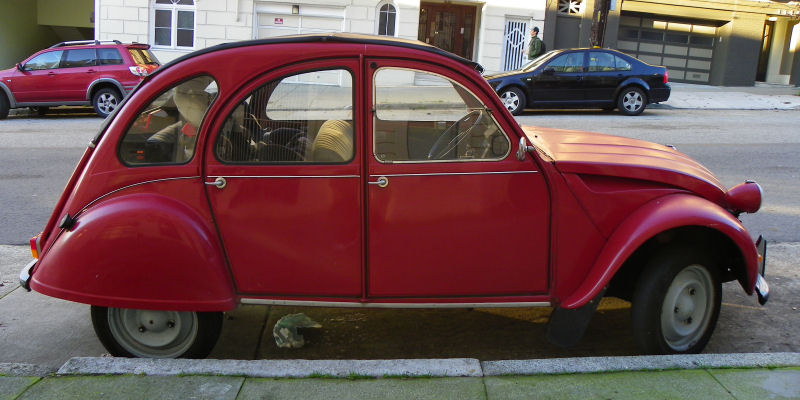 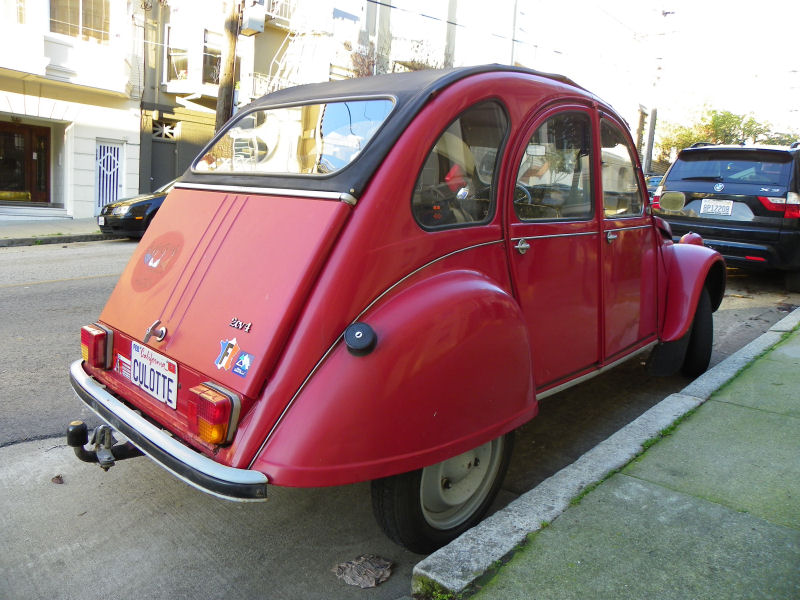 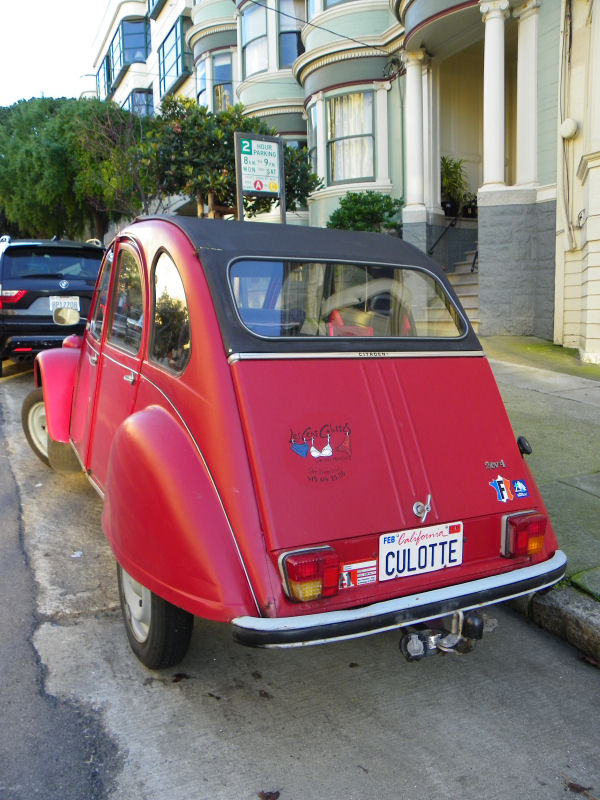 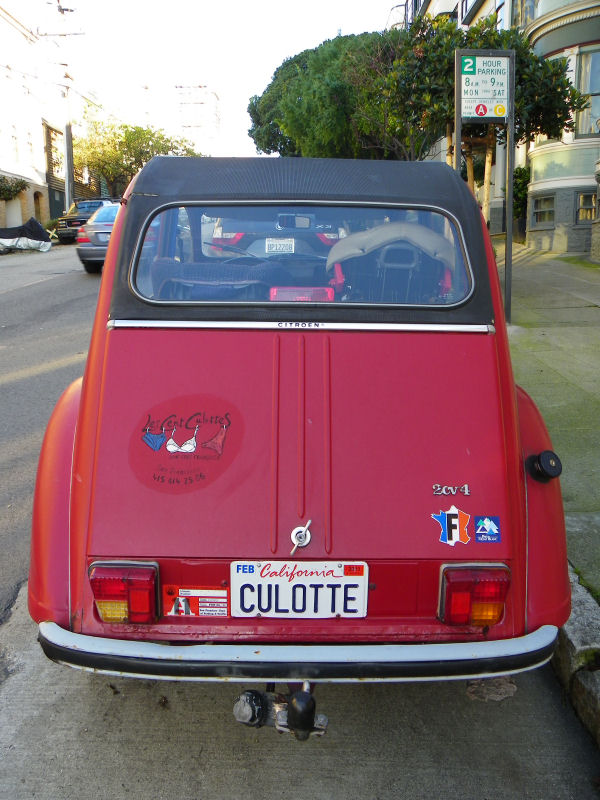 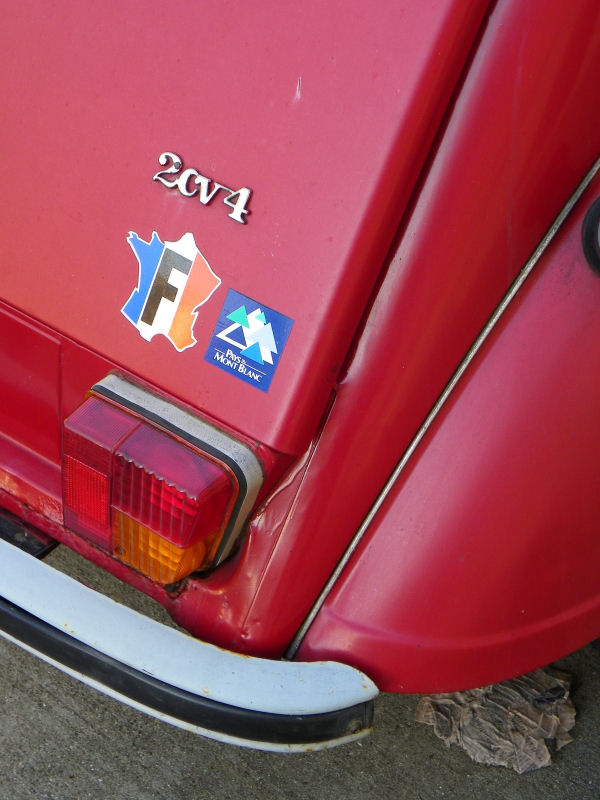 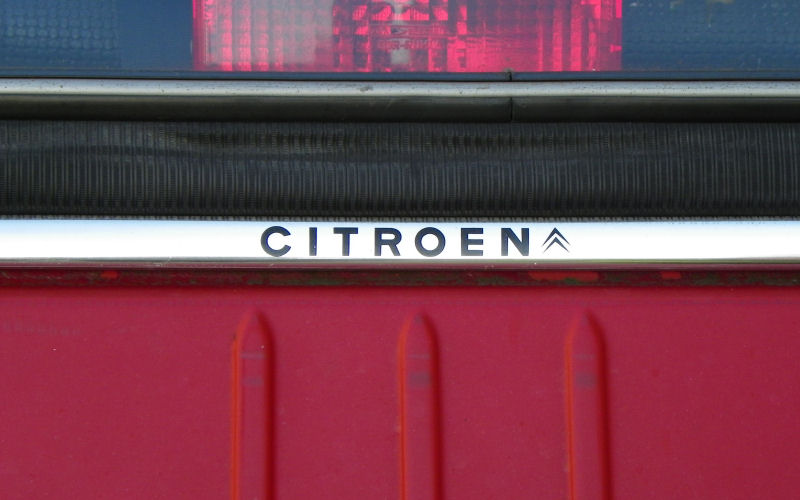 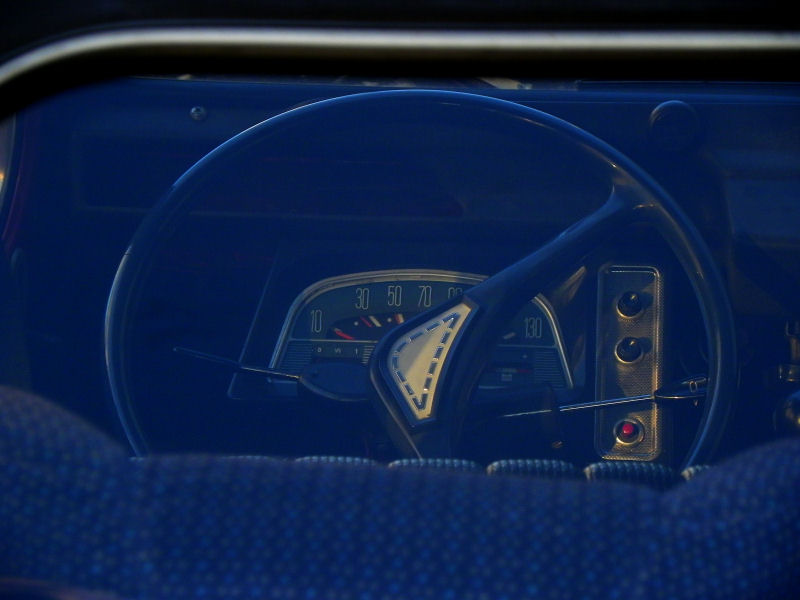 Conditionwise, the body is in fair shape aside from the crunched hood, a tweaked driver's door and a small crease in the left rear fender. My biggest concern is the bubbles of rust forming under the rear hatch. The paint job is certainly not original, judging by the foreign license plate on the front and the undercarriage which have both been sprayed over with red. A red-orange hue can be seen peeking through in places on the hood around the grille and license plate. Pictures of this car on Flickr from 2009 show a car with shiny paint, so it was probably a cheap paint job that has faded. The center high mount brake light is an interesting touch adopted by many classic car owners in the city, particularly those who drive tiny, lightly built cars with small brake lights mounted very low on the body. Given the presence of a pair of child safety seats in the back, the owner needs all the added visibility they can get to protect les bébés. Speaking of the interior, on this car it looks nearly new. I wonder if it's been cleaned up or reupholstered at some point.

I suppose if you're advertising a French clothing store, you can't get much more French than a 2CV. I just wish they'd fix it up and paint it properly.