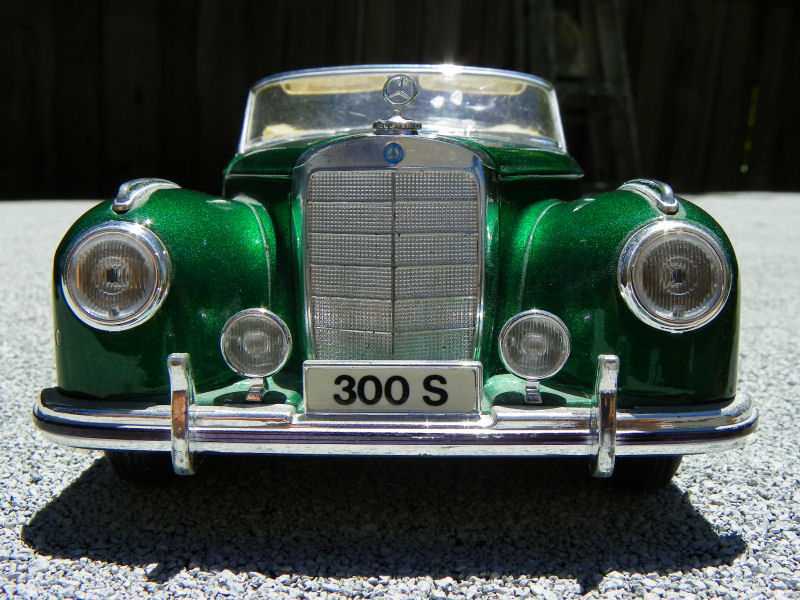 I shall never understand some of the color choices some model manufacturers make. Mercedes-Benz has always been that luxury brand that made formal, traditional cars in formal, traditional colors like black, silver and white. Maybe dark blue. So Maisto went and sprayed this one a very un-German metallic green. 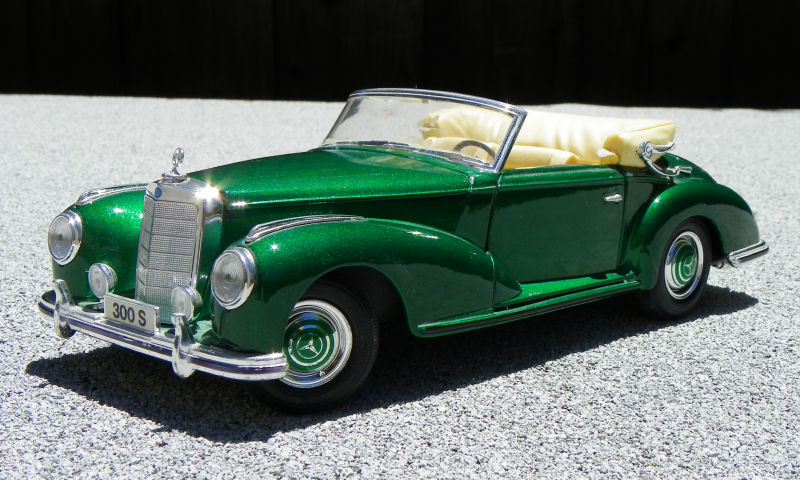 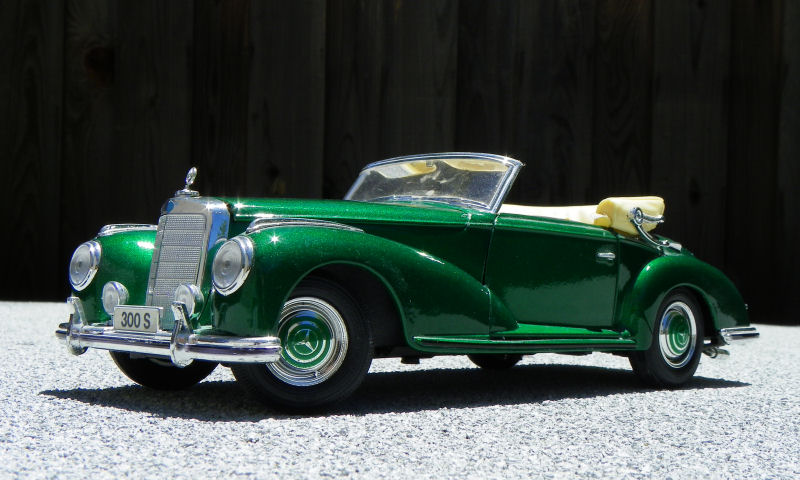 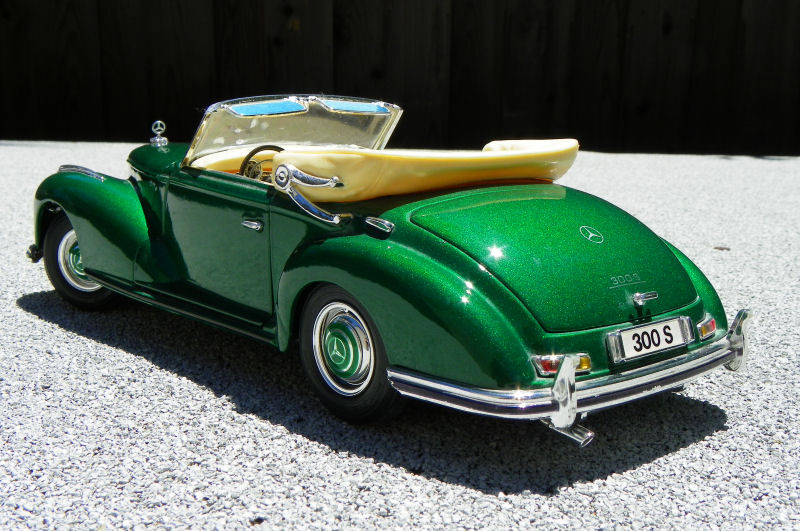 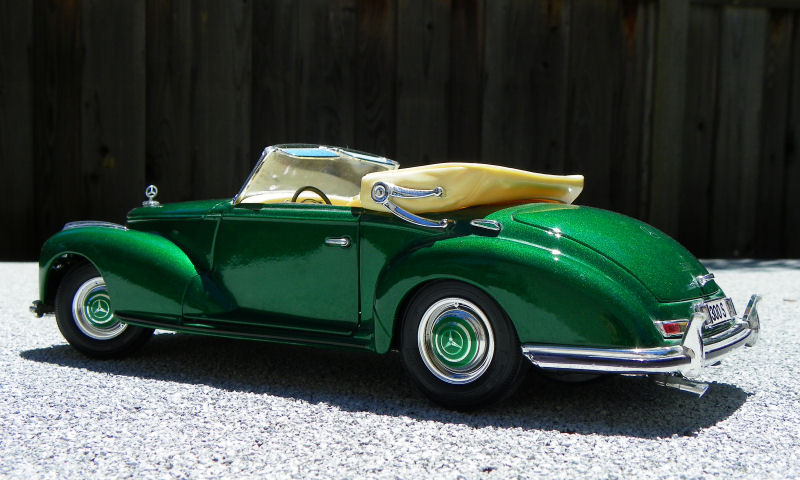 The Mercedes-Benz 300S has gotten a lot of play in the diecast market over the years. It has been released primarily by Maisto, but I believe the tooling has been sold or leased to Welly in recent years. Maisto made the car in green, black, maroon, blue and cream, then Welly released it in red, black and ivory. The green car you see here was one of my earliest large-scale diecasts, produced circa 1993. The real W188 300S Cabriolet was always a rare car, one of the most exclusive luxury cruisers of the mid-1950s, with a 3-liter straight six detuned from the Gullwing sports car. I believe that the Maisto release is patterned after the actual 300S Cabriolet A that sits in the Mercedes-Benz Museum in Stuttgart. That car is a '54, but the effect is the same. 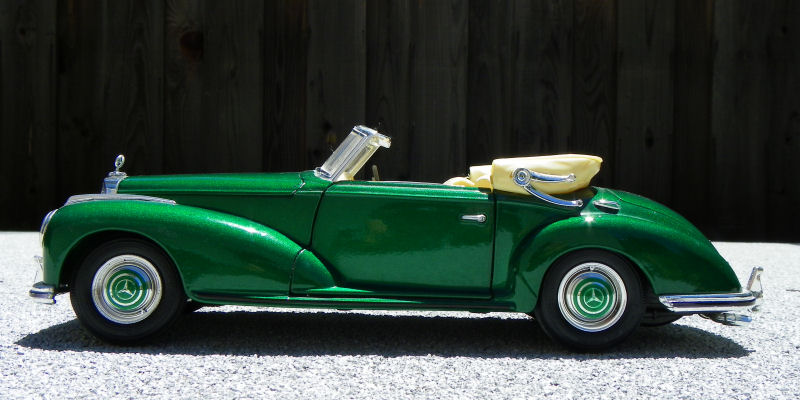 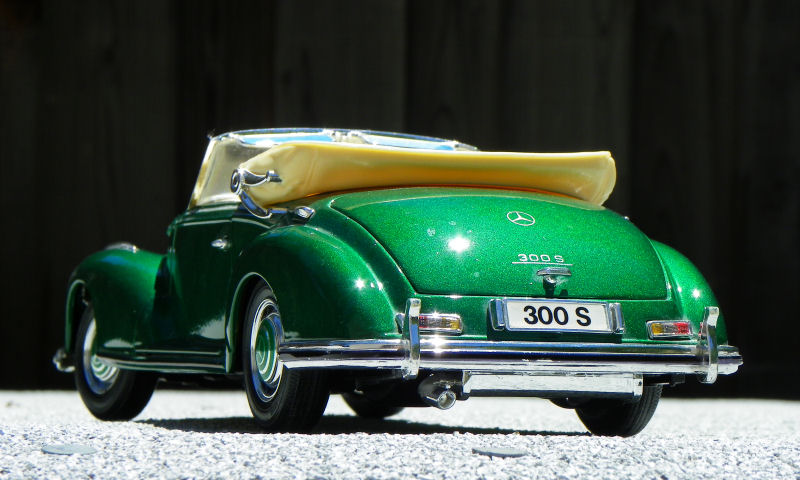 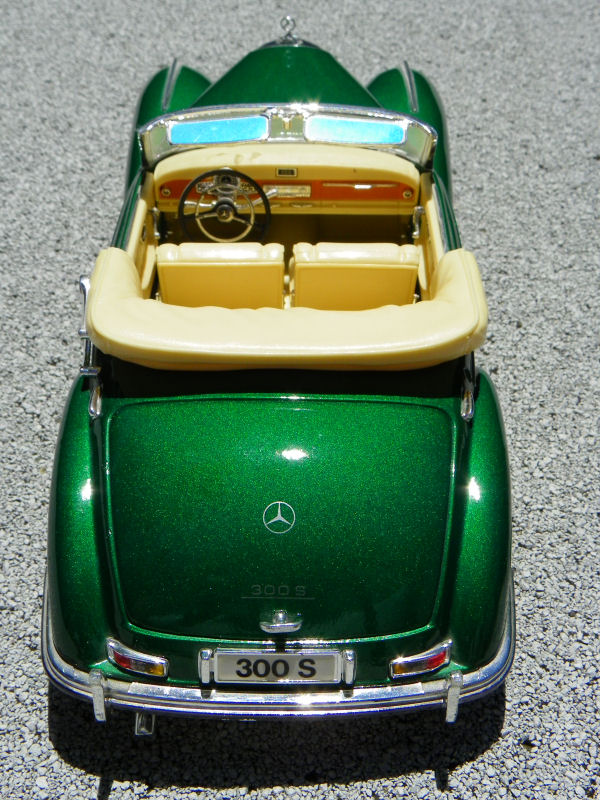 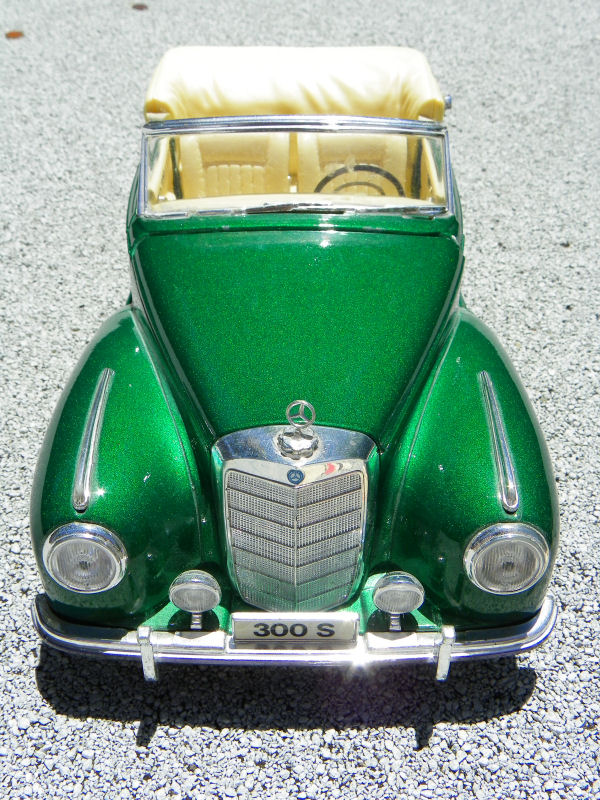 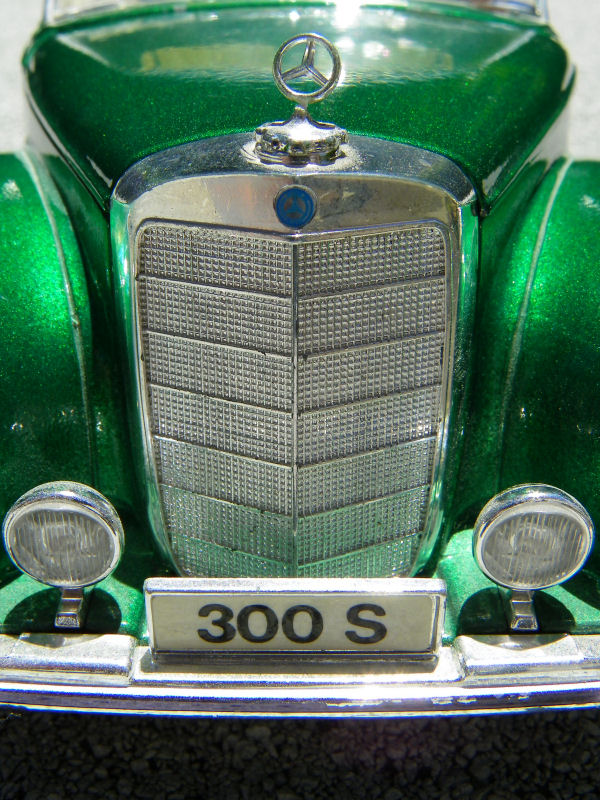 Looking at the model, one can see where Maisto cut corners. The trim strip running down the length of the beltline is there, but should be chrome or at least painted silver. The body is well formed and has held up nicely for the most part. It suffered during my taking-stuff-apart phase, as the hood comes off and the front grille also doesn't have much to hold it in place. The trunk lid never stayed up when opened, but the spare tires come out whether they're supposed to or not. There are little beige stickers that cover the seams on the front edge of the convertible top, but those have nearly peeled off. The windshield has glue spots on it from when its young owner (me) broke the frame and attempted to fix it. The landau bar on the right side of the convertible top also disappeared at some point. 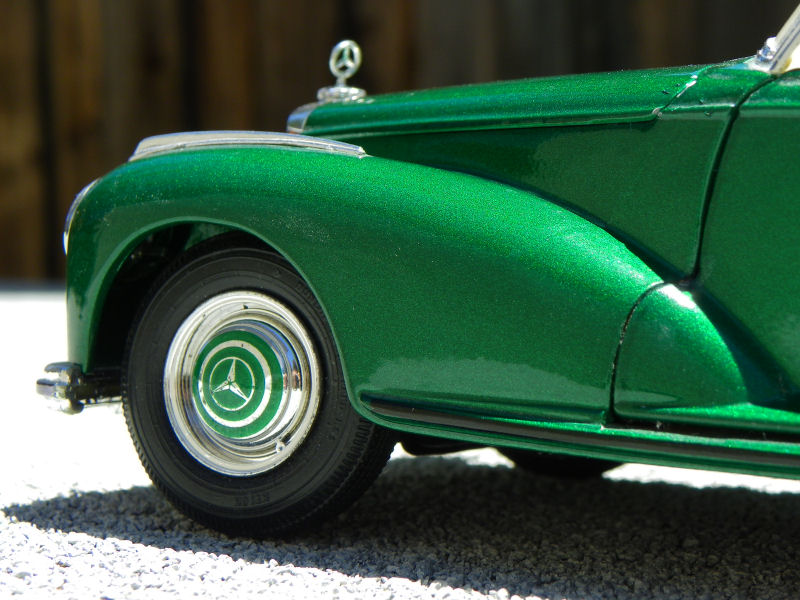 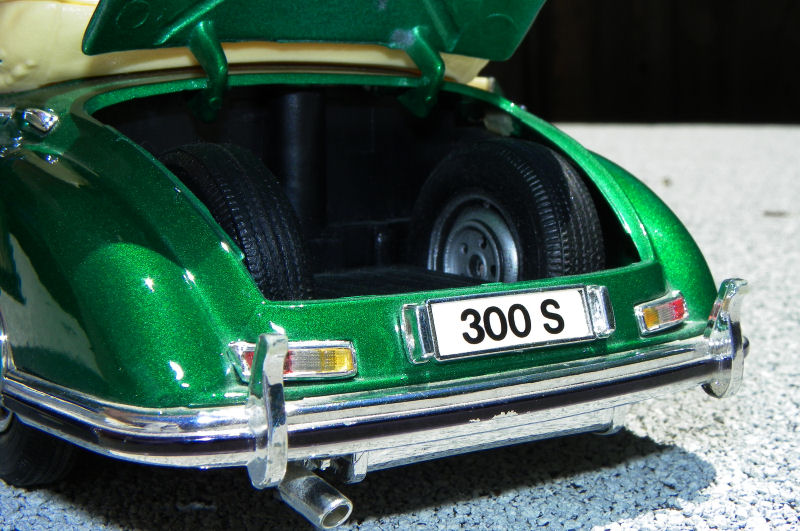 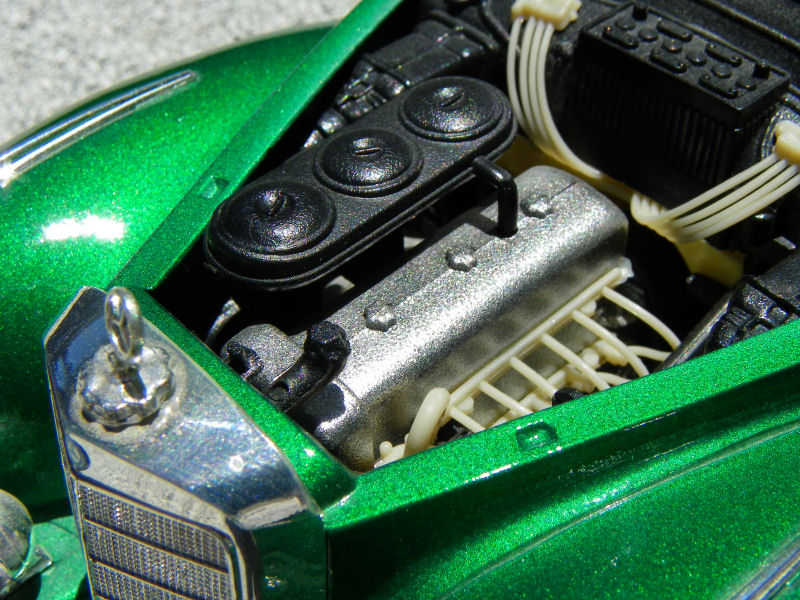 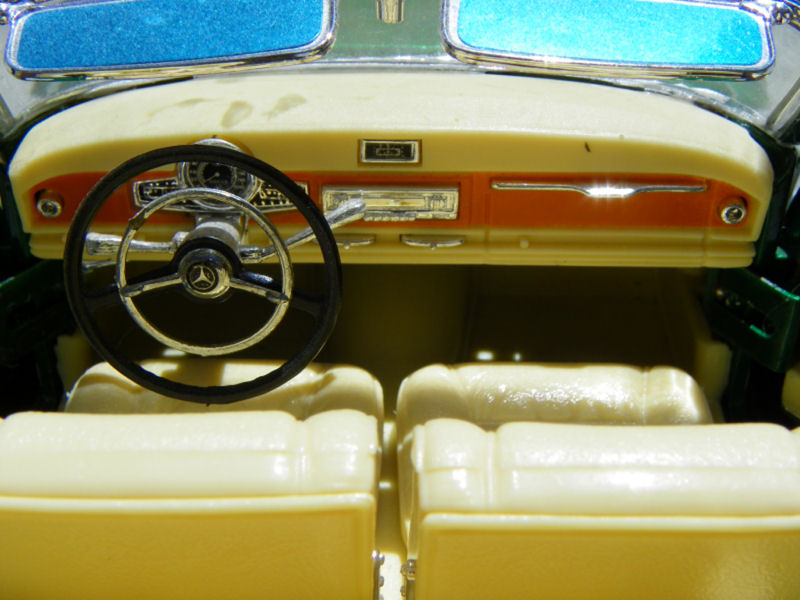 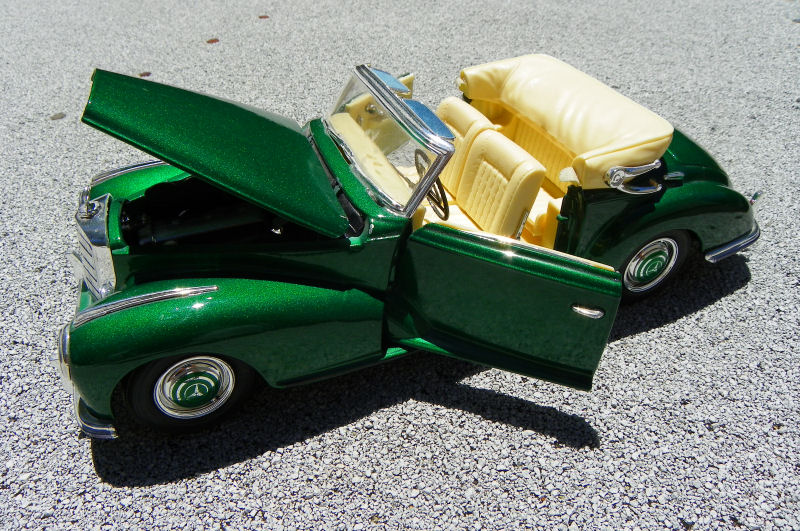 The model has a few high points. The interior is decently detailed with full instrumentation and a clock, chrome handles and vents. Curiously the radio is just a chrome thing with six preset buttons but no detailing to pick out the AM band. It appears that I broke off the rearview mirror as a kid and never realized it. Underhood, you get just about everything you could ask for in a cheap diecast. The engine's not all one color, there's a battery, and all the wiring is in place. Underneath, you have rolling wheels that steer, and fully sprung suspension. It seems like a proper suspension is becoming less common in a lot of diecasts. "Classic" Maistos like this one are still a good value and display well in a budget collection.
Posted by Jay Wollenweber at 12:00 AM