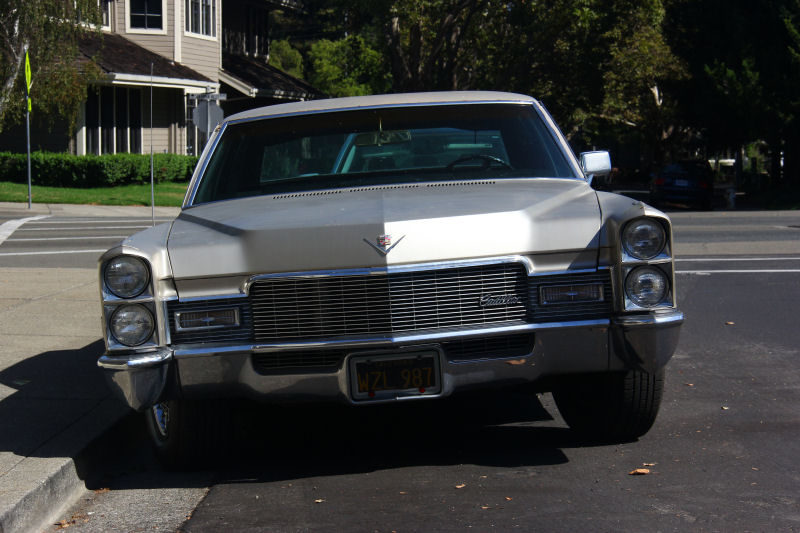 This week I have an impromptu theme for my posts. These are all cars I've found outside the same Danville auto repair shop on the same side street, just not at the same time. Last one for this group is a 1968 Cadillac coupe that I believe is a DeVille. 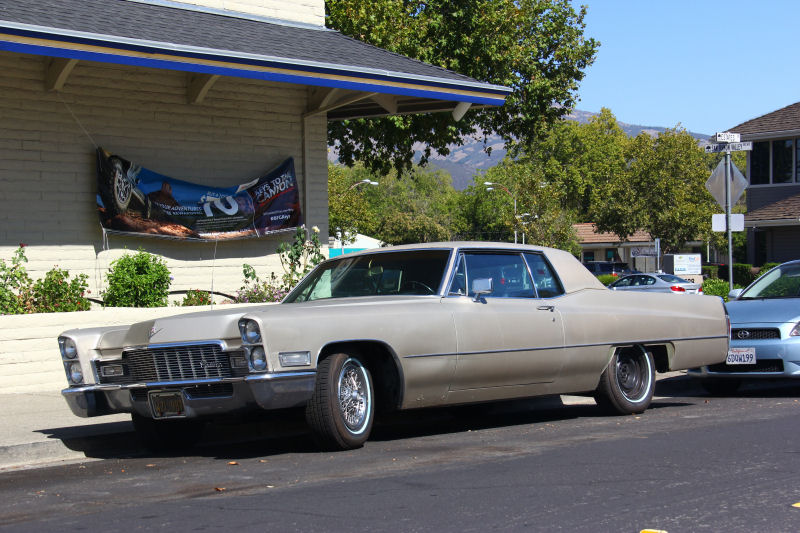 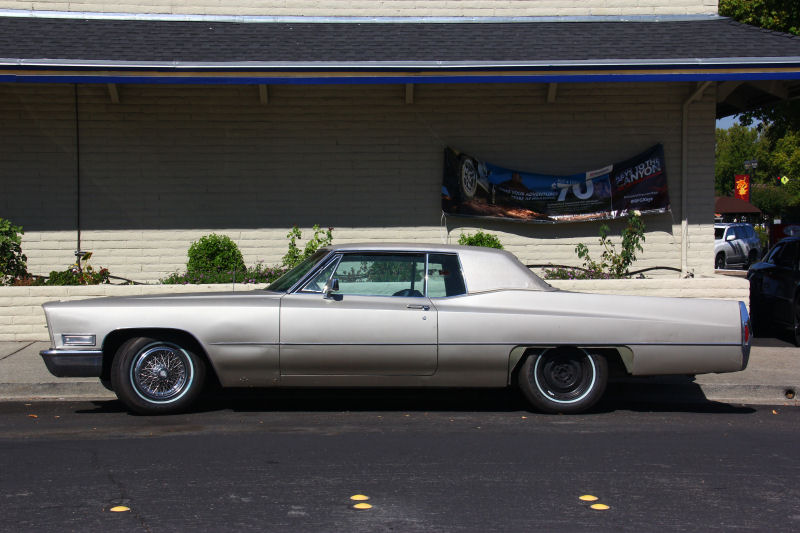 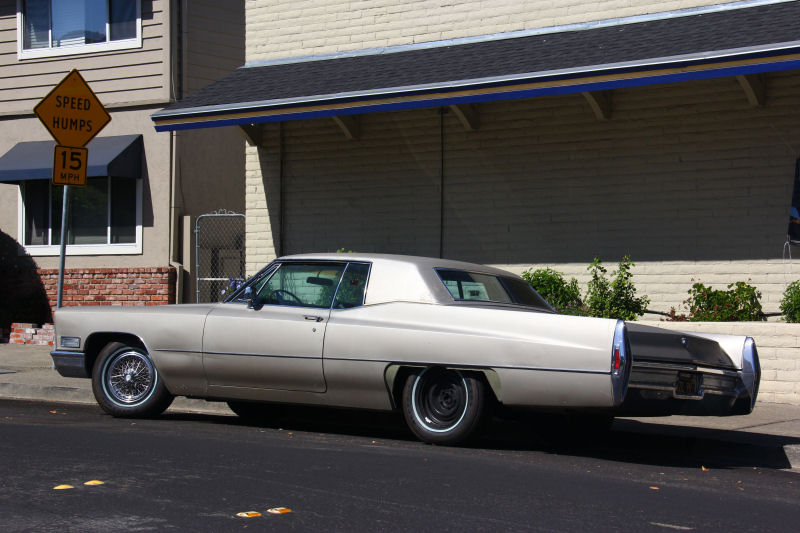 For the longest time I was sure this was a Calais. The Calais was Cadillac's base model from 1965 to 1976, replacing the long-lived Series 62 (sometimes called Series 6200). The Calais looked all but identical to the more expensive DeVille, but offered a little less standard luxury equipment. Every 1968 Calais received a 472 cubic inch V8, automatic transmission, power windows, automatic climate control, an electric clock, AM/FM stereo and three-speed wipers. Power seats, leather-grained vinyl upholstery and whitewall tires were options. The biggest deal on the Cadillac order form was paint and interior. On most Cadillacs a buyer could choose from 147 interior combinations across the various leather, vinyl and fabric color and texture options. Calais offered five cloth and two vinyl seat styles, with no vinyl roof option. Twenty exterior paint colors were available, but some years of Calais were not offered with the extra-cost "Firemist" metallic paints. 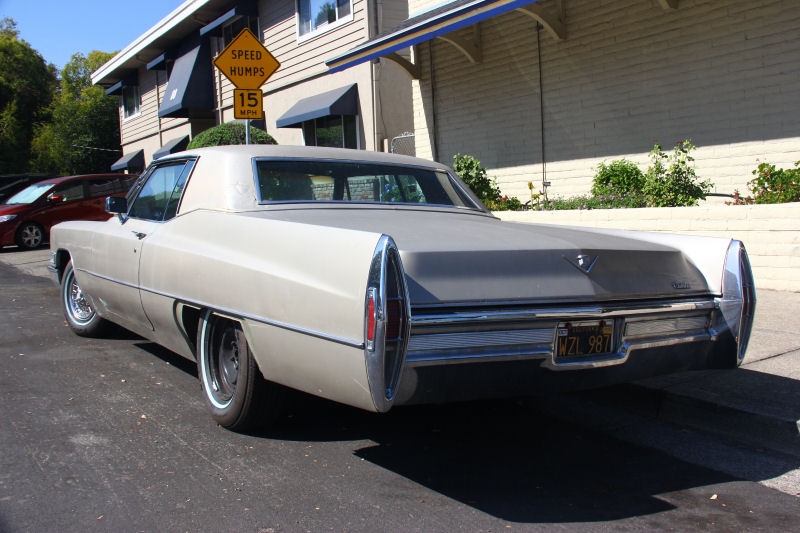 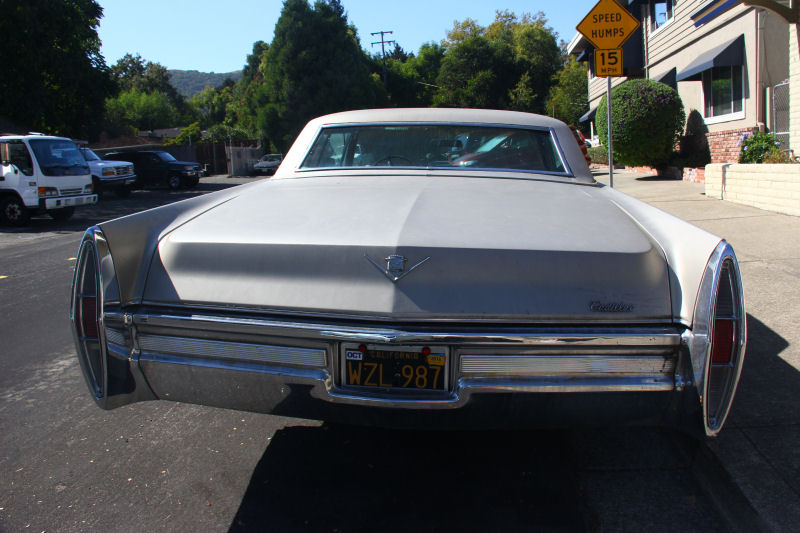 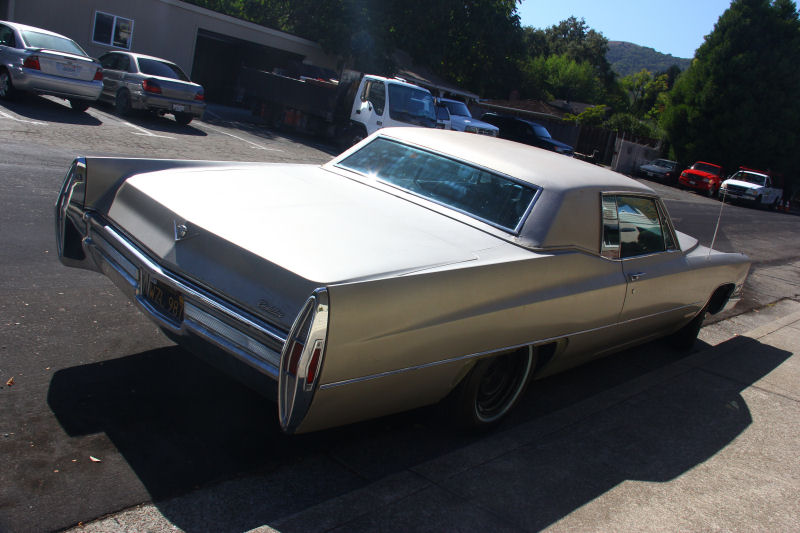 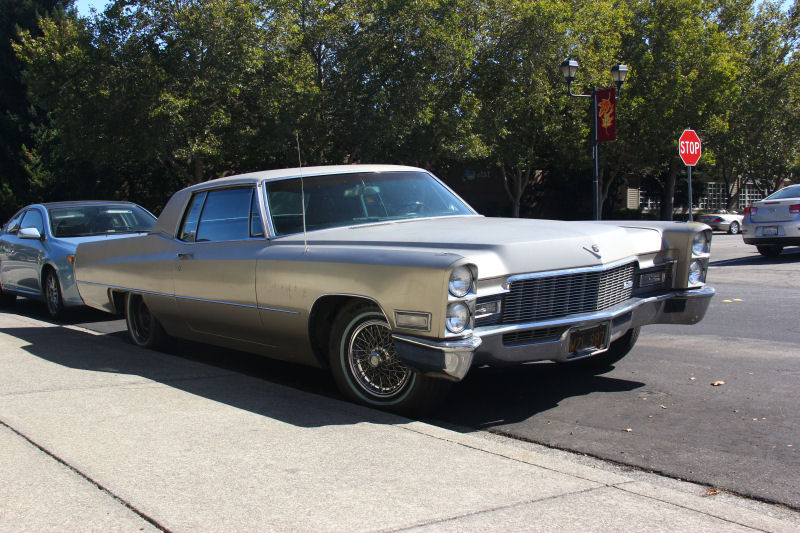 But there's a problem. This car has no trim level badges to indicate its identity. And it has a painted roof that is cracking like it isn't a solid metal surface, and a thin metal trim piece around the base of the roof. Which tells me this car probably has a vinyl roof, which means it is most likely a Coupe DeVille and not a Calais. This car has some body filler repair work in the front fender area and the rear fender skirts are missing. The wire wheelcovers are from a 1980s Chevy Caprice. Paint looks like an older job that might have been applied without taking the car apart fully. Since it's not a show car, the owner may only be concerned with keeping the mechanicals in order so the car can still be enjoyed on the road. 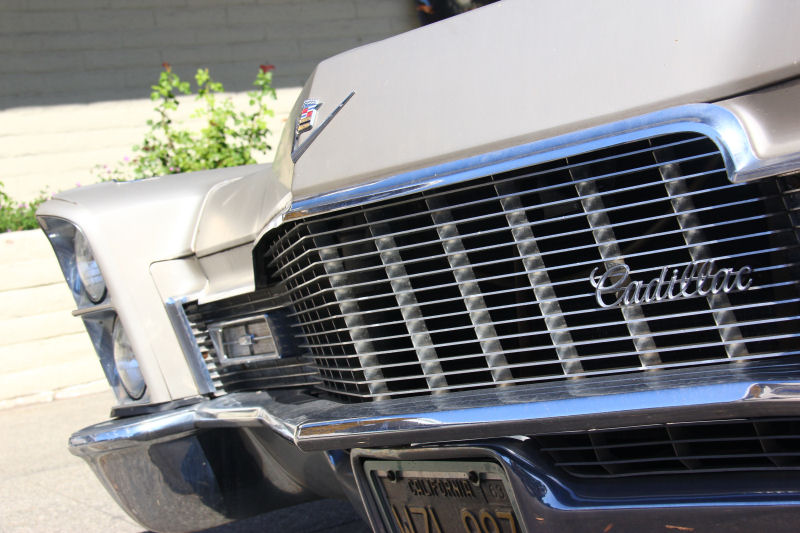 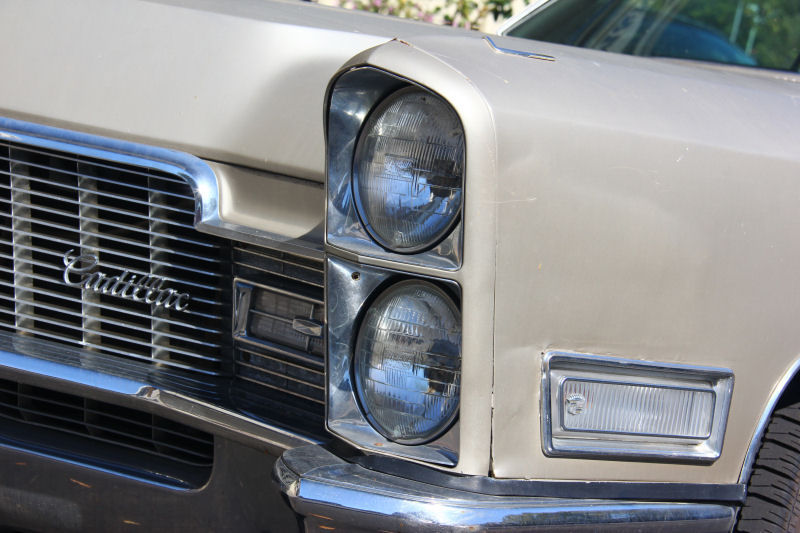 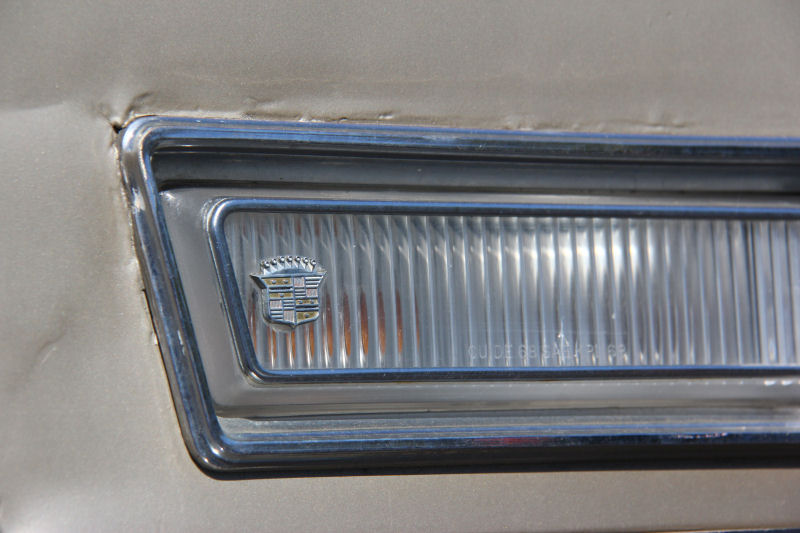 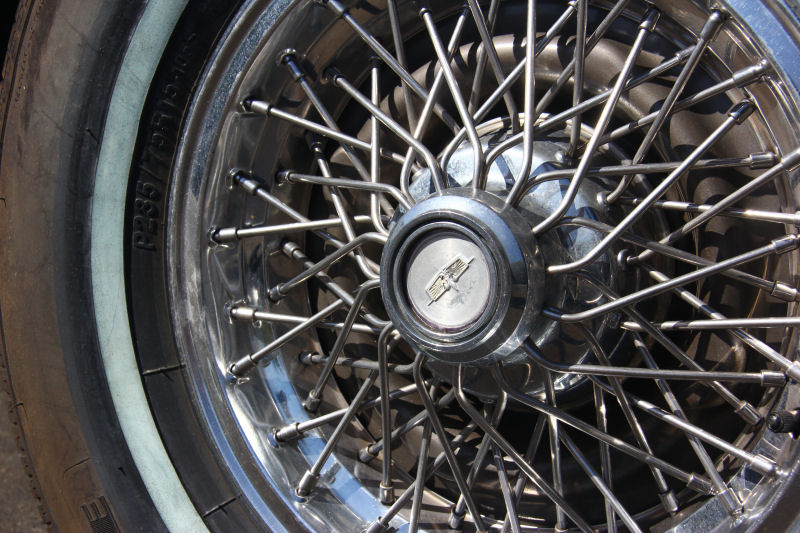 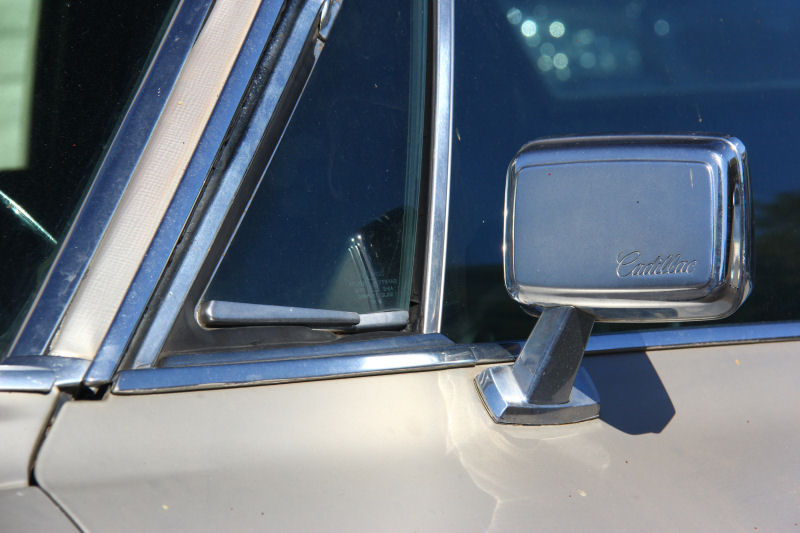 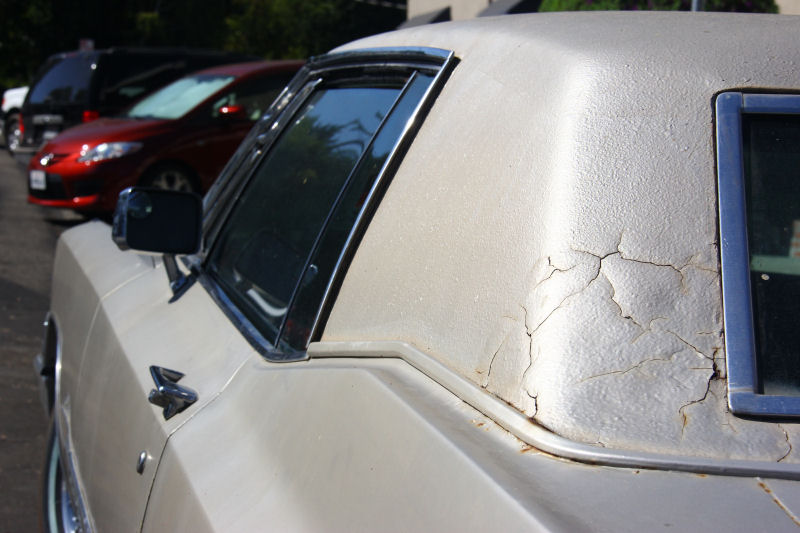 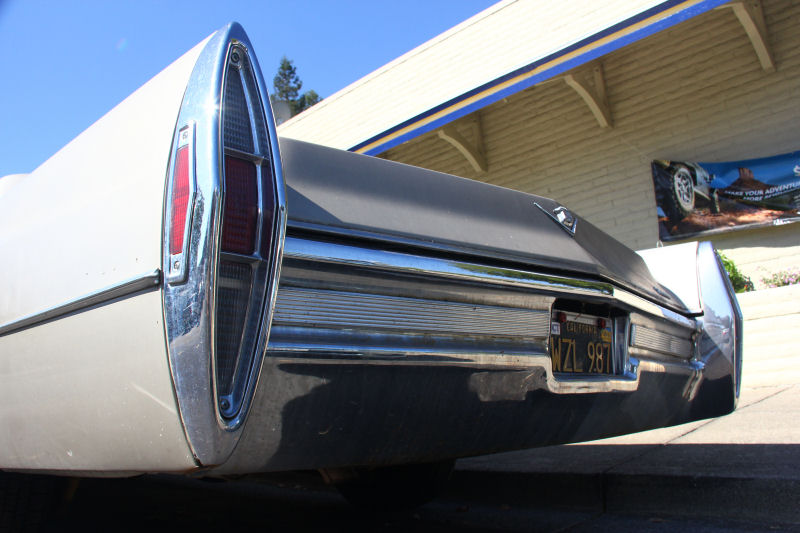 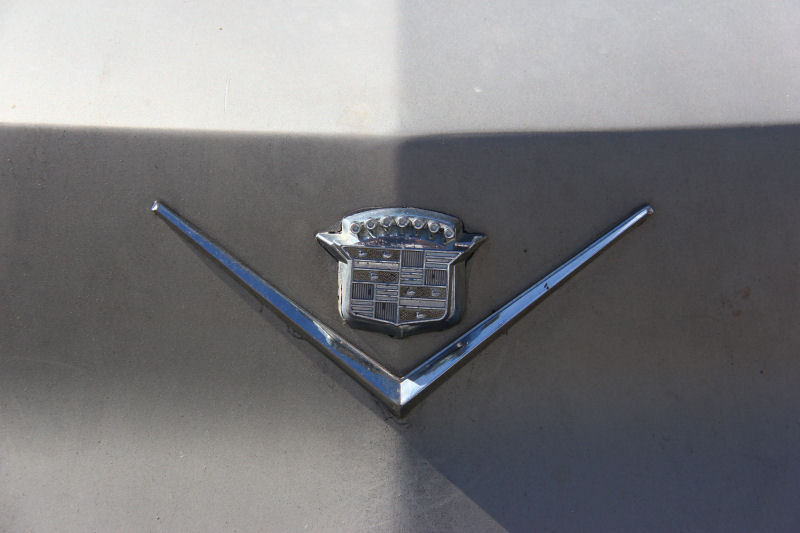 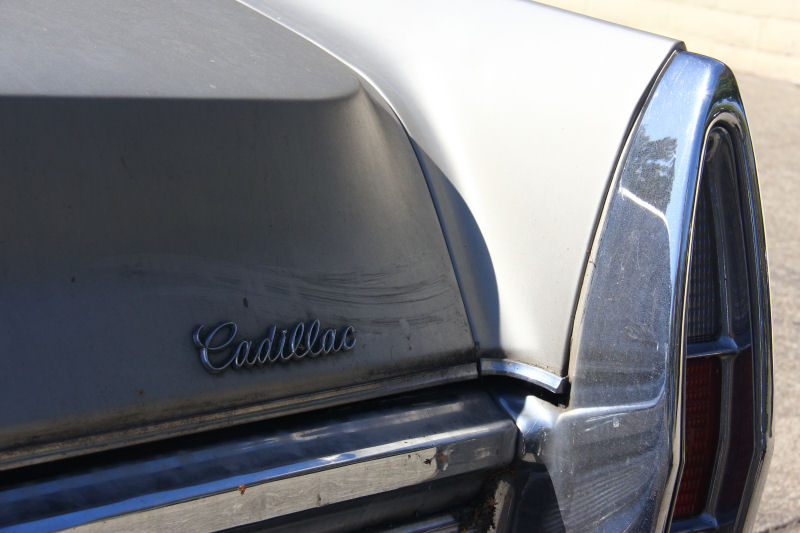 I usually don't get excited about Cadillacs but this one caught my eye enough to shoot it. It has enough patina to look like it has an interesting story, I'm just a little sad I didn't get the chance to learn it.

Photographed October 2015
Posted by Jay Wollenweber at 12:00 AM