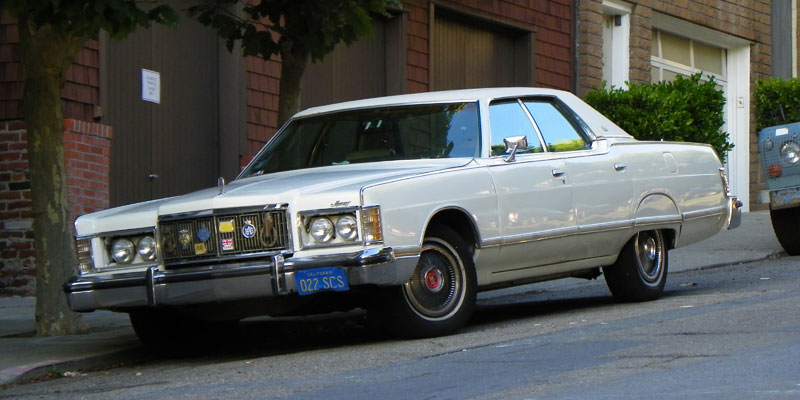 Continuing my "Spirit of ... '77" theme this week, I present to you this lovely 1977 Mercury Grand Marquis sedan. I found it somewhat by accident, the way I find many of the cars I feature, while walking in San Francisco. I frequently set off to find a particular vehicle I've previously researched and end up finding something completely different. In this case I ventured up Telegraph Hill and stumbled upon this exquisite Mercury. 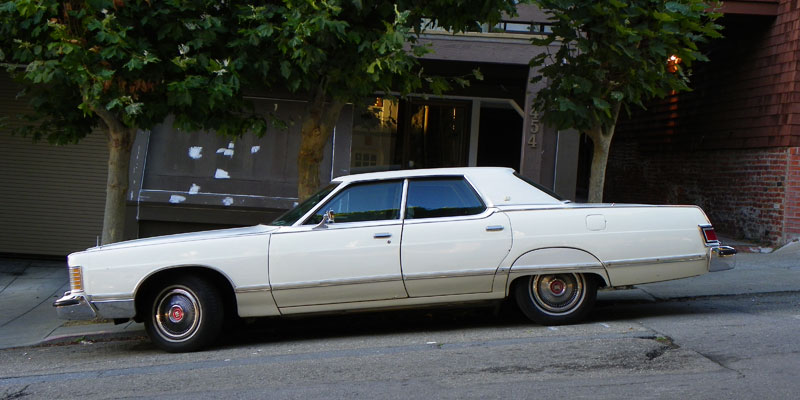 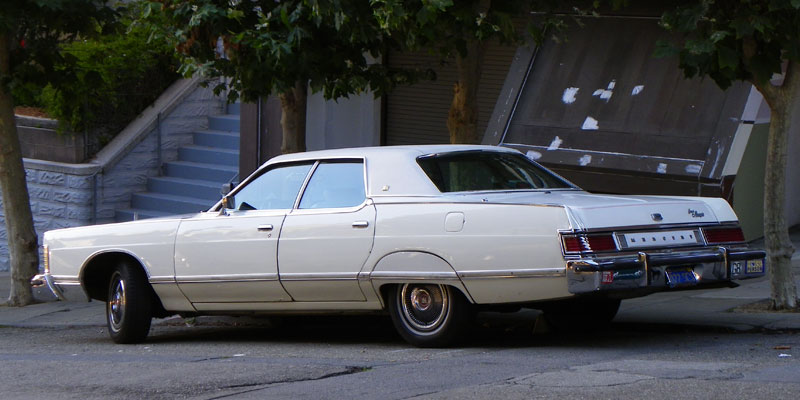 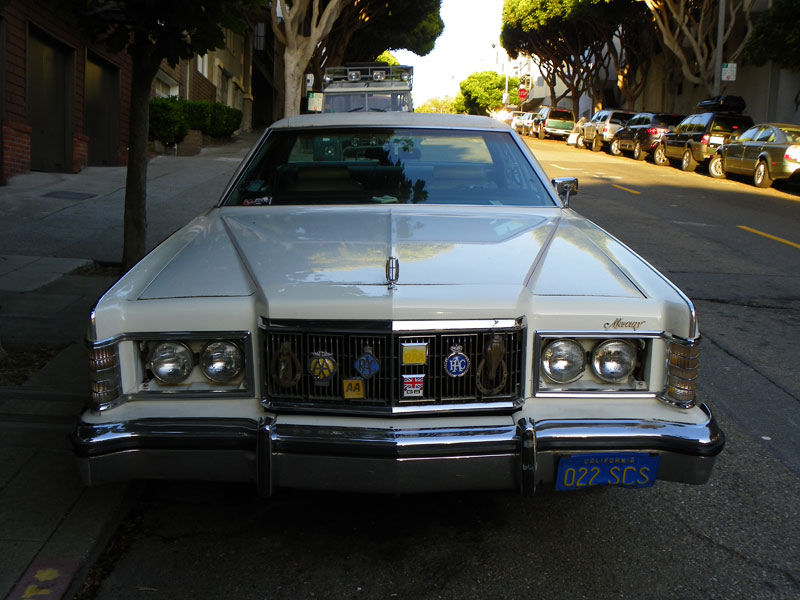 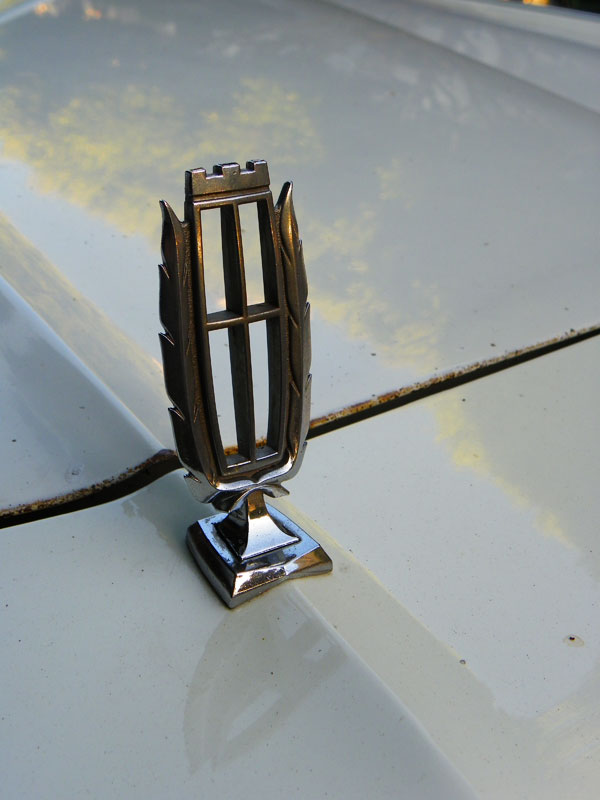 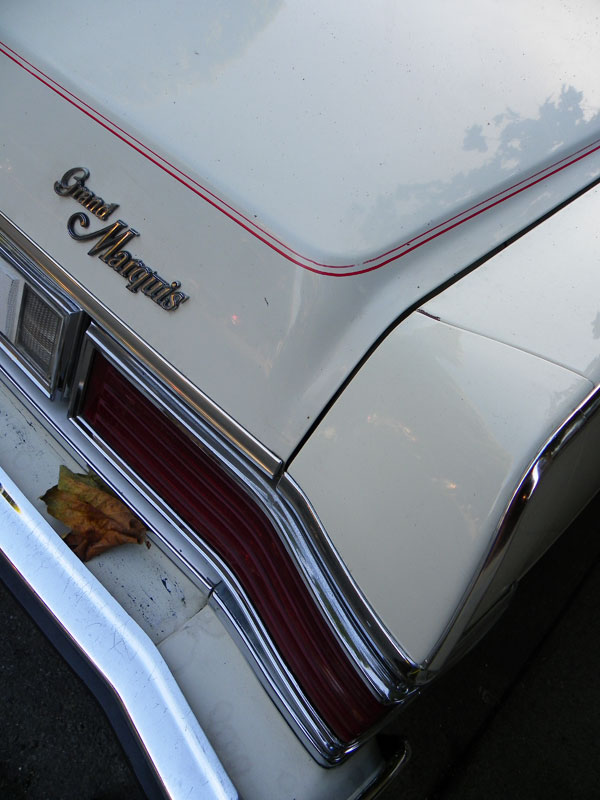 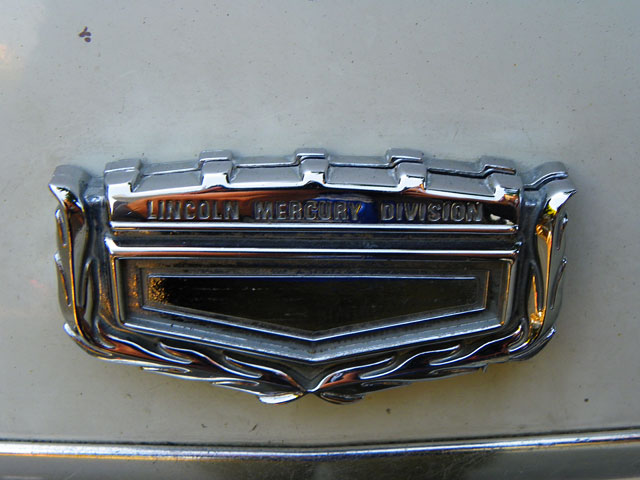 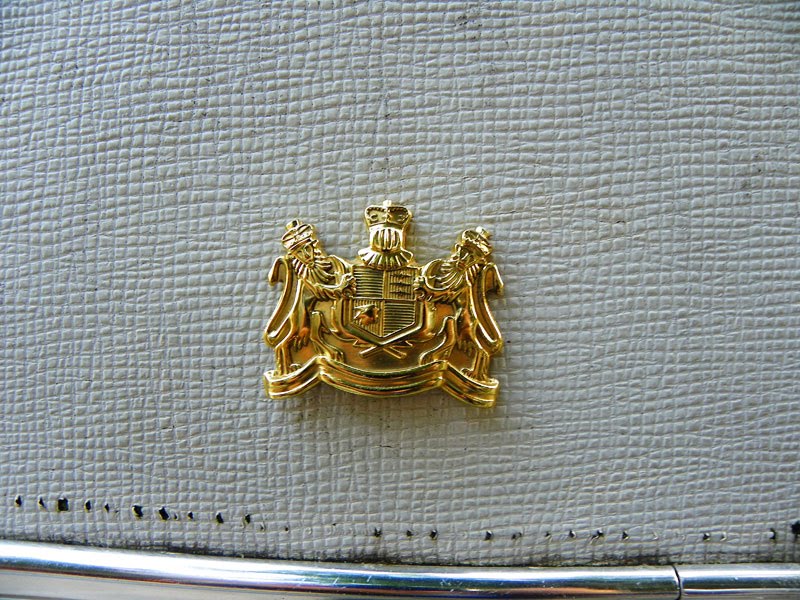 Let's compare it to the checklist I made for the pseudo-luxury quotient of the Monte Carlo Landau. Vinyl "Landau" top? Check. Whitewall tires? Check. Pretentious hood ornament? Check. Named for an opulent European city? Not quite, but named after a French nobleman. Hood longer than I am tall? Pretty close. I didn't lie down on the car to find out.
Grand Marquis was the top-line trim of the biggest and best Mercury model in 1977. If you read my Monte Carlo feature, you may remember this comment: "As you may have noticed, Landau and Brougham are popular Malaise terms of pseudo-prestige and were slapped on darn near every car with a vinyl top and delusions of grandeur." Unsurprisingly, the trim level below Grand Marquis... is Brougham.
Brougham is defined by Wikipedia as follows:


In the 1930s, a brougham was a two-door sedan, especially one electrically driven. The term was also applied to a vehicle similar to a limousine but with an outside seat in front for the chauffeur and an enclosed cabin behind for the passengers. The name derives from the light, fashionable brougham carriage of the nineteenth century.

Why did I bother with that when this is not, in fact, a Mercury Marquis Brougham? Perhaps to show that the name is rooted in history and that somehow is associated with luxury. The first broughams were two-door enclosed carriages. A landau was a carriage with a convertible top. Both have been bandied about and slapped on cars for so long, the companies probably forgot what the terms meant.
But enough about that. This sucker is a chrome boat. Standard engine on the 1977 Grand Marquis was a 460 Ford V8. This body style was produced up through '78, at a time when buyers shied away from such huge cars. In 1978, GM had shrunk their cars, and Ford was about the only company left with a truly huge full-size lineup. Emissions regulations strangled them, so even the mighty 460 was neutered to 202 hp, nearly 160 less than it had when this body style was introduced five years earlier.
Condition-wise, it looks as though this Merc has been around the block a few times. And that's not a bad thing. I love it when people with massive cars terrorize Prius drivers in San Francisco. I gather that the owner is an Anglophile and horse lover, from the obvious bumper stickers and grille adornments such as a horseshoe and numerous vintage "AA" badges representing British Automobile Association membership. From 20 feet away this car looks great. It's classy in white with white padded vinyl top and red pinstriping. Up close you can see it's a bit rough around the edges, and the hideaway headlights aren't hiding very well. But then again, I never liked those much with the covers closed. Keen-eyed viewers may recognize the Land Rover behind the Mercury as one that was featured here months ago. I believe the same person owns both, since both vehicles reflect similar interests in their bumper stickers.
So, bottom line: I really like this beast. The only way it could be an even more awesome and ridiculous example of conspicuous 1970s consumption is if it were a two-door hardtop with loud pipes. Oh yeah, and take the smog controls off the engine, let that baby breathe!
Posted by Jay Wollenweber at 8:30 PM