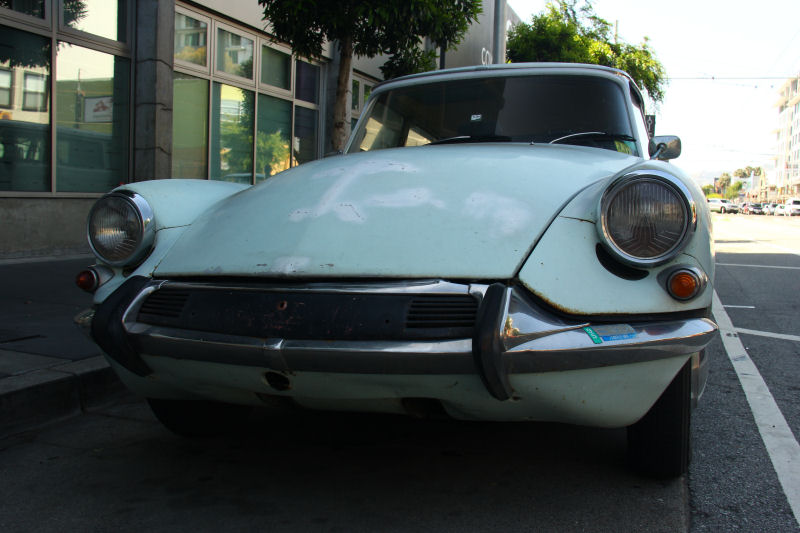 All right, I may have cheated some.
Last year a relative invited me to a meeting of his car club, the Arcane Auto Society, in San Francisco. This was what I found parked on the street outside the garage where the members met. It's a 1965 Citroën DS 19. It was not the only club member vehicle I photographed on the street that morning and I'll be happy to share the others with you at a later date. The club meeting functioned as an unofficial indoor car show and was a fascinating assemblage of everything from a right-hand-drive Reliant Regal three-wheeler with UK plates to a Peel Trident bubble car. Regrettably, those were off the street and within the boundaries of a car show and not eligible for blog features at the time, even though they were awesome. Even here, we have rules... 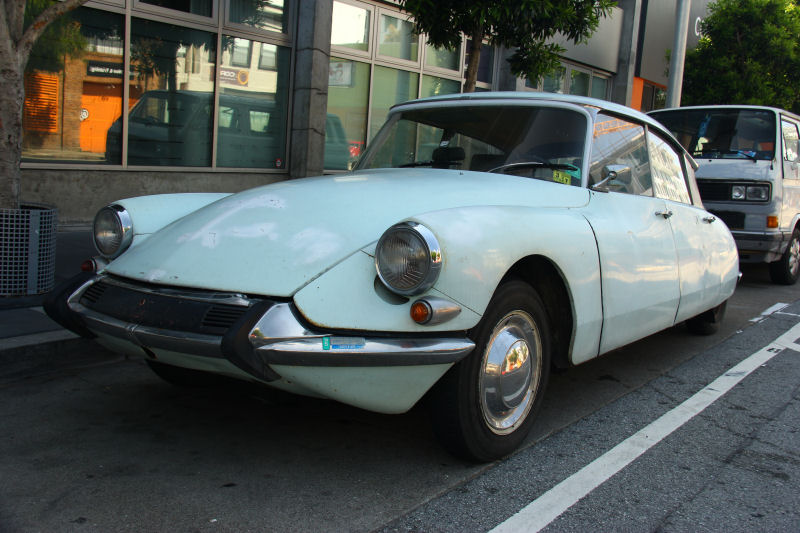 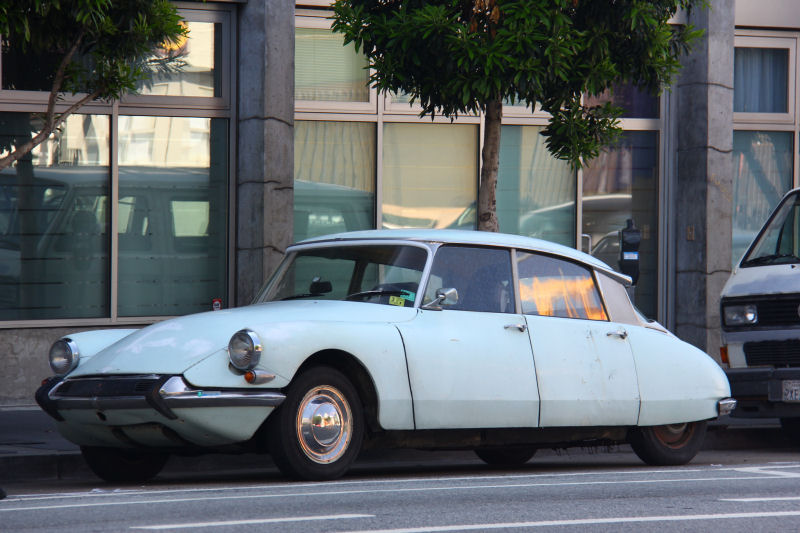 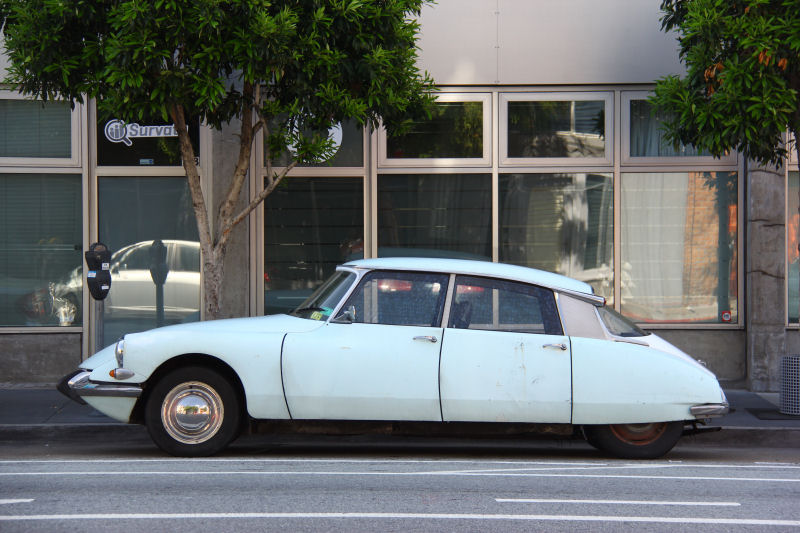 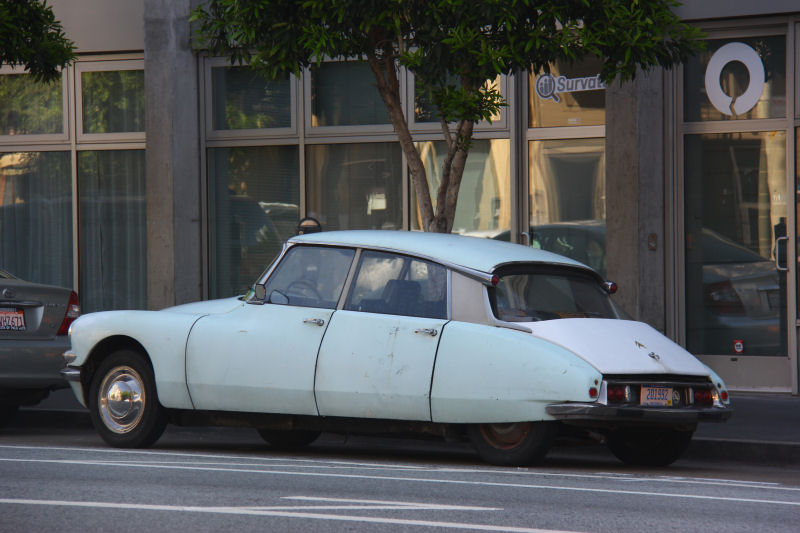 Speaking of rules, the DS broke a lot of the conventional wisdom of its time. It was probably one of the most revolutionary cars ever when it came to market in 1955 and was modern enough to stay in production for 20 years. Hydraulic self-leveling suspension was one of the most important features of the car, allowing it to offer some of the best ride quality in the industry. These cars were never known for their power, thanks to France's tax on engine horsepower, but their handling and braking ability were always very good relative to other vehicles of the era because of light weight and low center of gravity. It featured independent suspension, power disc brakes and front-wheel-drive. 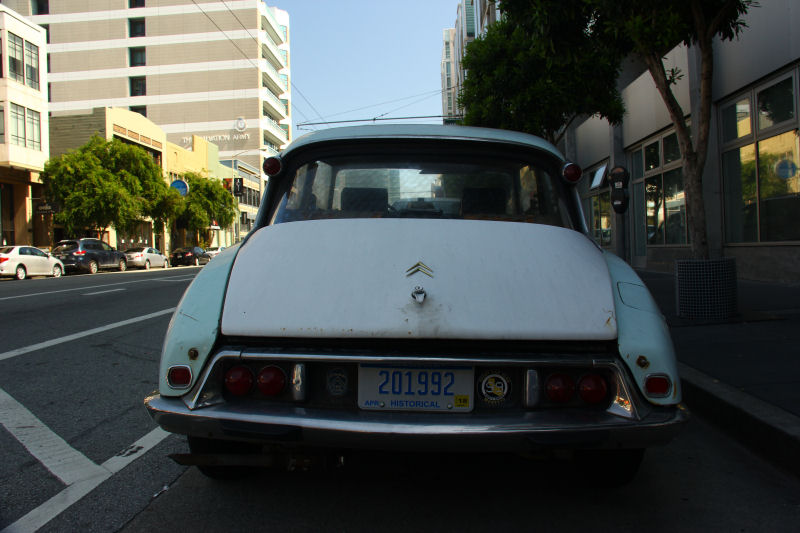 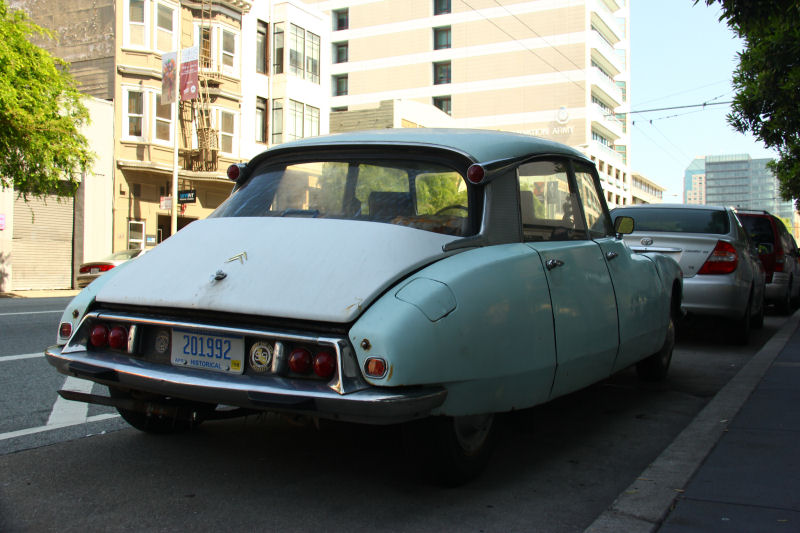 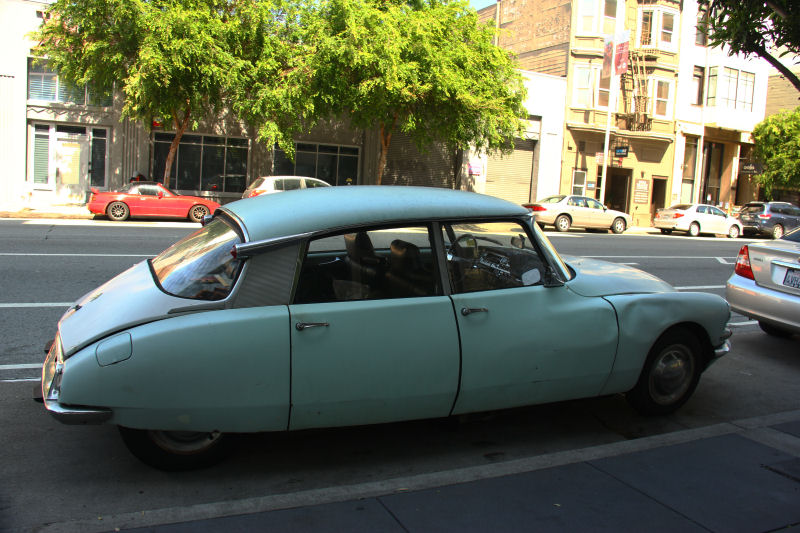 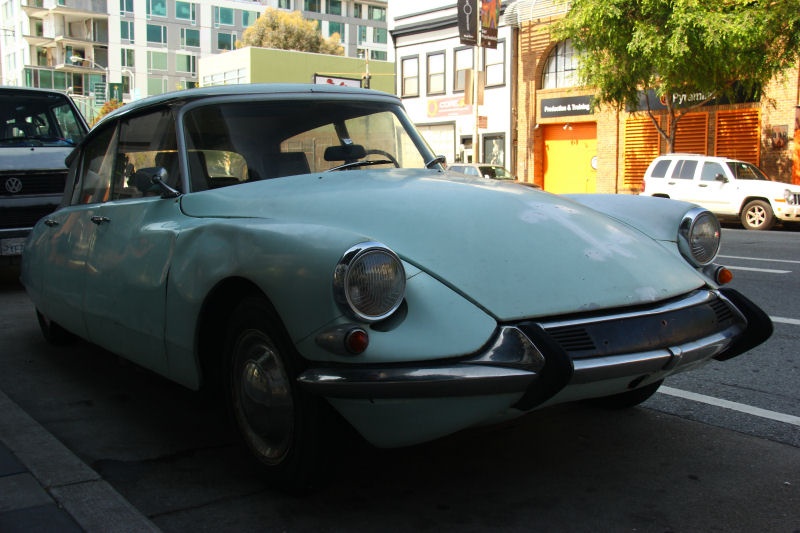 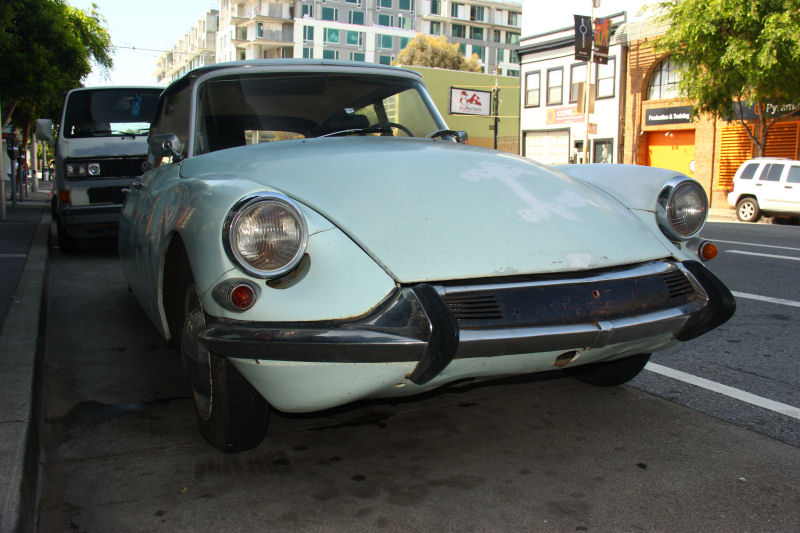 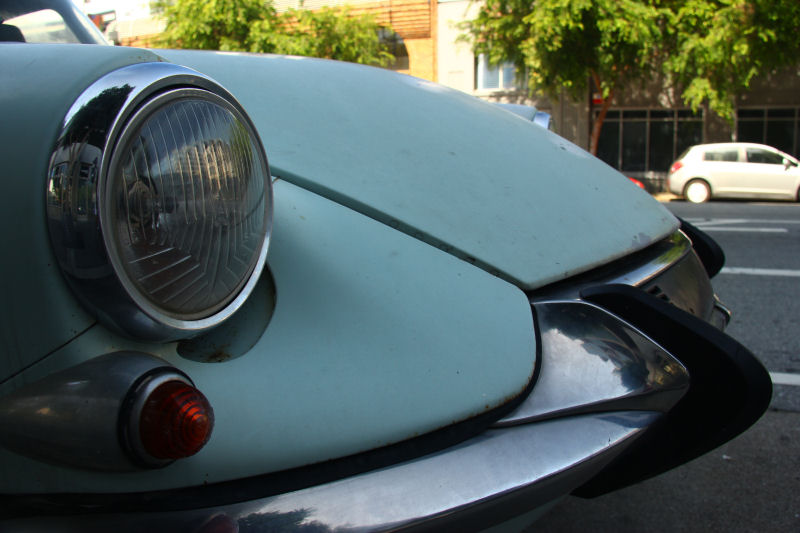 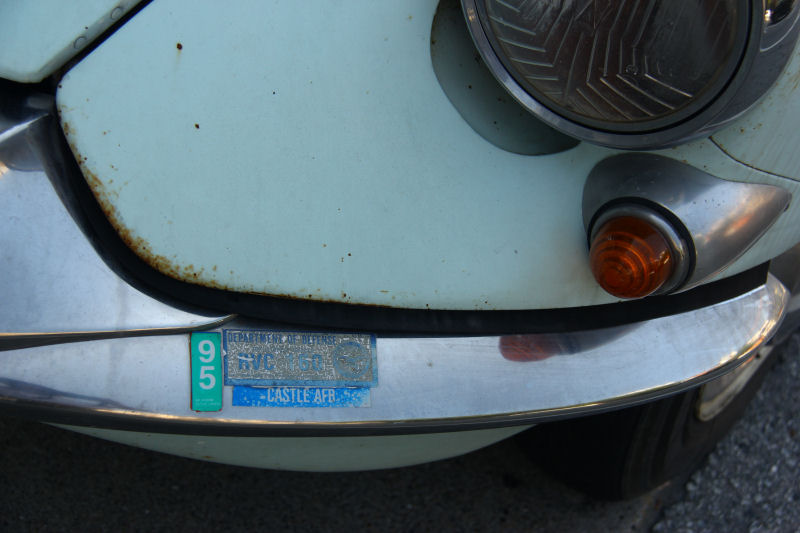 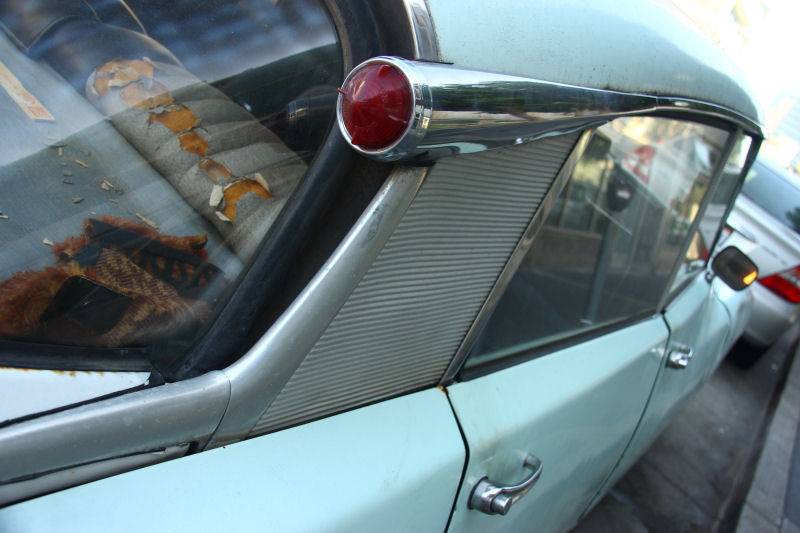 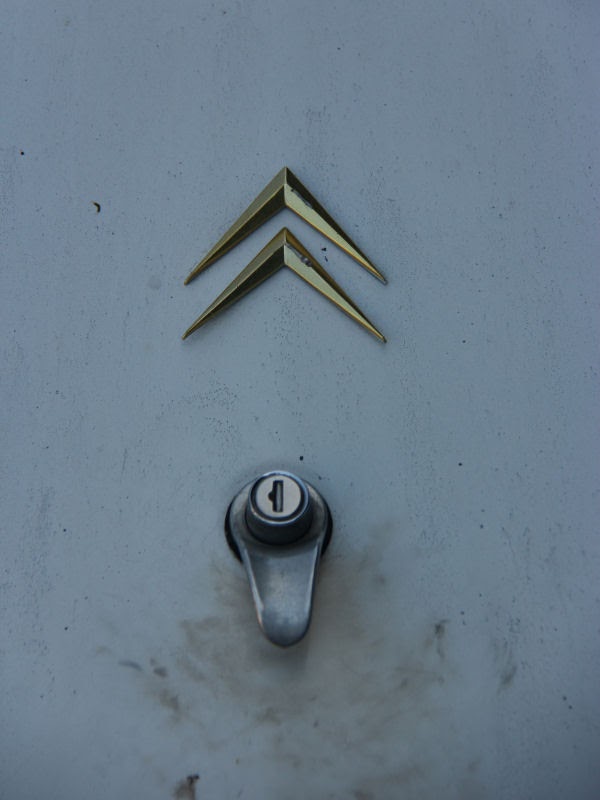 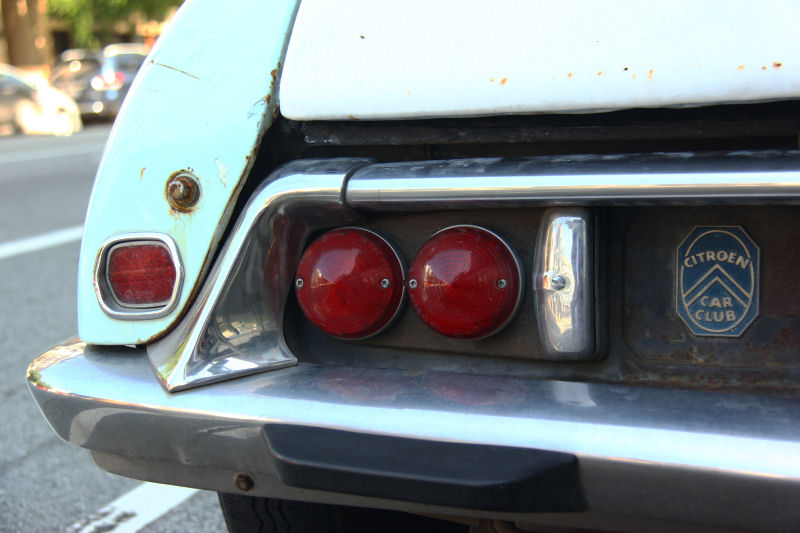 This well-used but original example with Michigan plates is either a long way from home or just recently relocated to sunny California. Which is interesting, because it wears parking permit stickers from Castle Air Force Base near Atwater, California, dated 1995. Whoever owned this car must have been one of the last people stationed there, as Castle AFB was decommissioned at the end of 1995. It wears what may be the original coat of what looks like Carrara White, named for the slightly bluish marble stone native to Italy. The interior is a bit rough and the body has surface rust, but it all appears solid and quite restorable. That is, if the owner wants to do that. There's a great shop in Oakland that specializes in old Citroëns and could definitely help him out. I wonder if the hydraulic system still works?
Posted by Jay Wollenweber at 12:00 AM