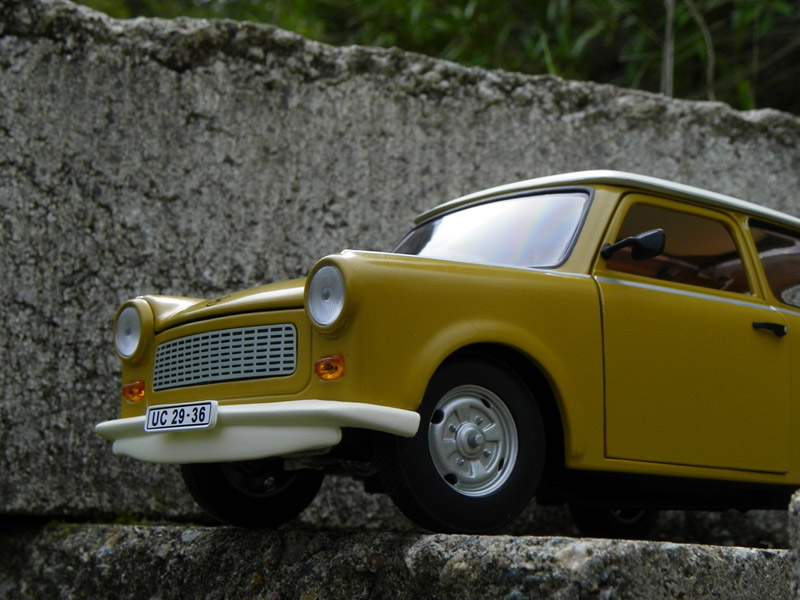 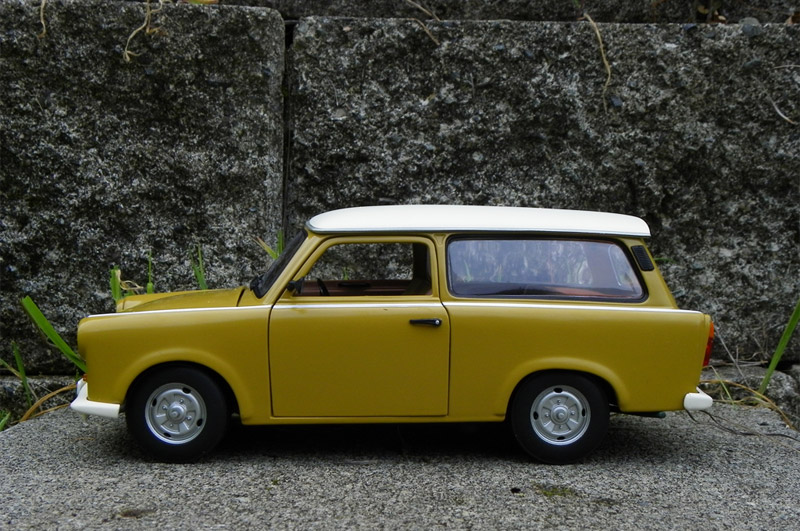 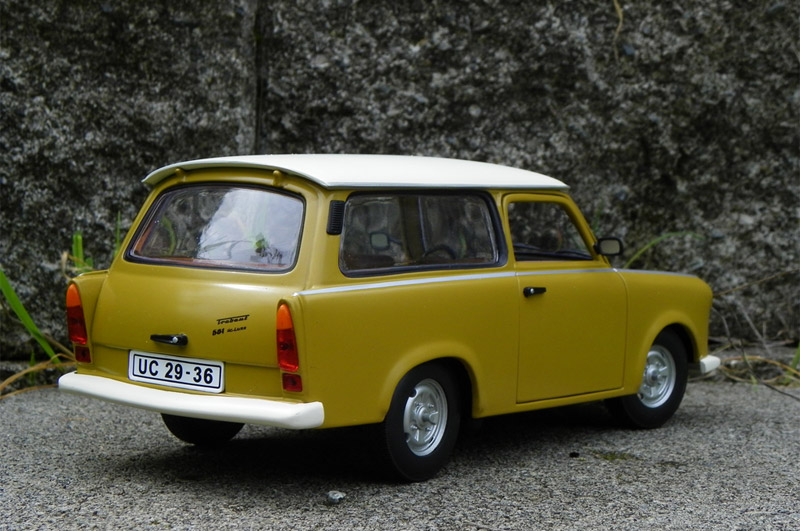 I love these silly little cars and of course wanted to own a diecast replica of one. Sun Star makes quality 1/18 scale models and I've been satisfied with their cars in the past. When I found this tan 601 Universal in the gift shop I pounced on it. Sun Star also produces a 601 "Limousine" (a two-door sedan). These may actually be the same tooling used by Vitesse in the late 1990s.

Looking at the model directly, it's accurately shaped and surprisingly hefty for a replica of a car that weighed less than a ton. I like to joke that it's actually all wrong, because it has a diecast metal body when the actual car did not. Same goes for my Auto Art Saturn SC coupe (which would have had polymer body panels) and my dad's Maisto Corvette Z06 (which should have a fiberglass body). Body detailing is minimal, which makes sense for two reasons. One, the Trabant was an exceedingly basic car. It didn't have a lot of equipment, or body trim, or other gingerbread. It's a car that carries people and goods, that's all. The other reason is that diecast models have become more complex over the years. They aren't seen so much as toys anymore and so many have gone upmarket for adult collectors. The Trabi introduced in 1998 by Vitesse may have been part of the older school of "it's a child's toy, we can't have too many small parts". 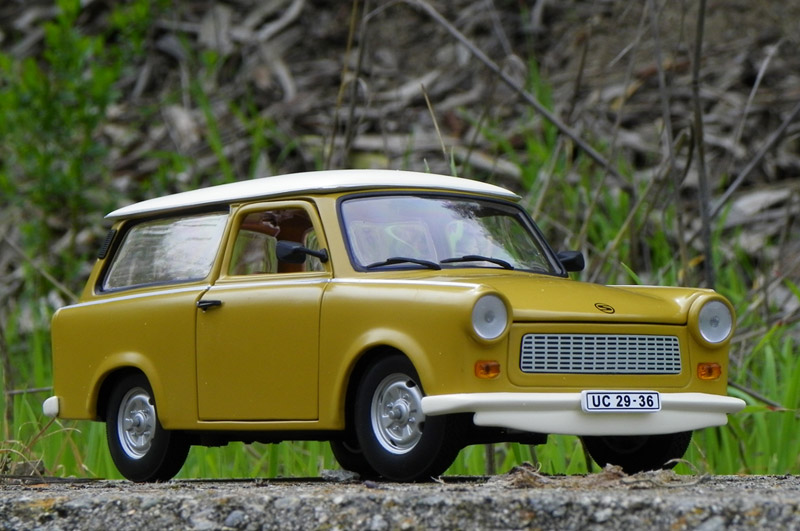 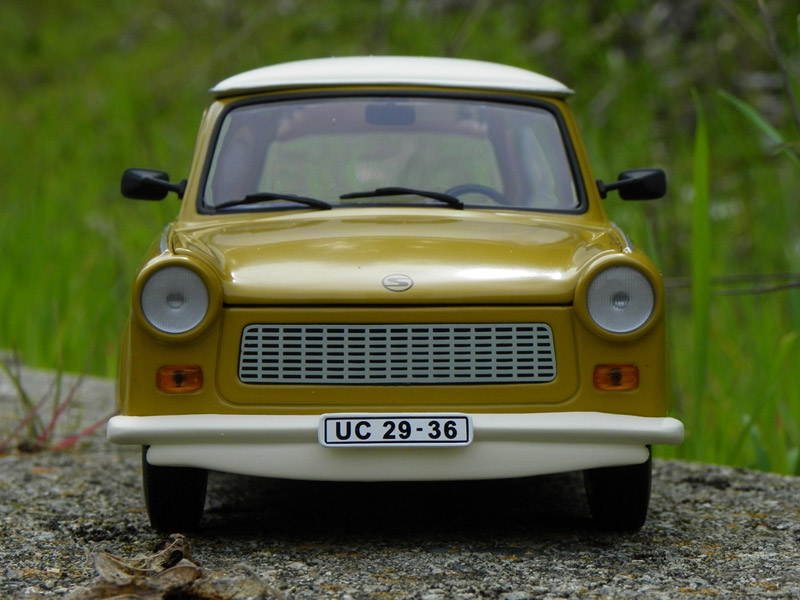 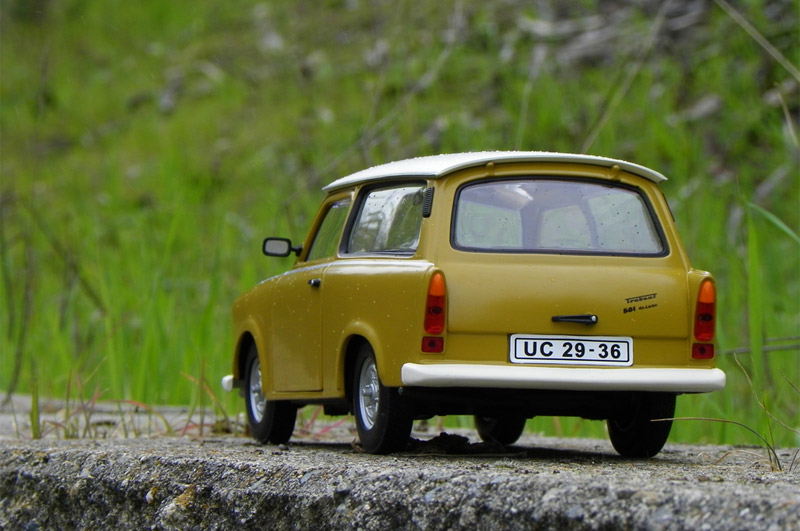 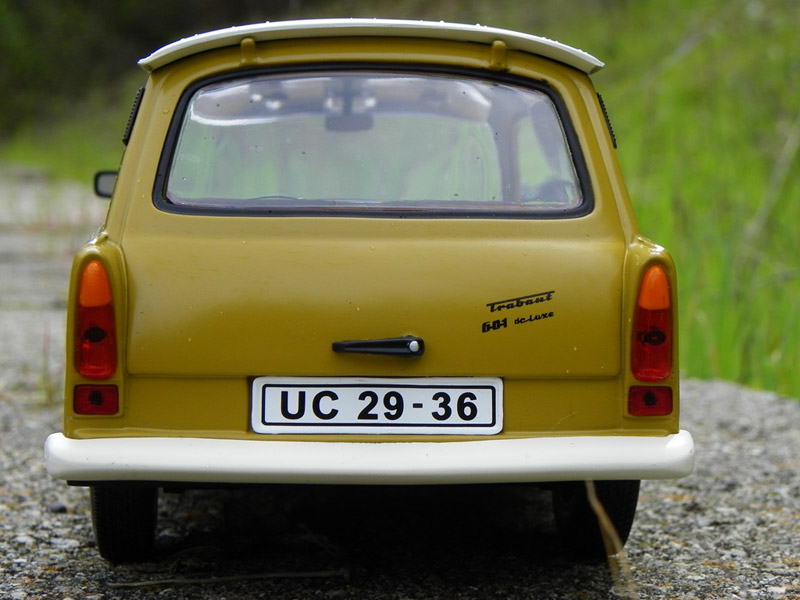 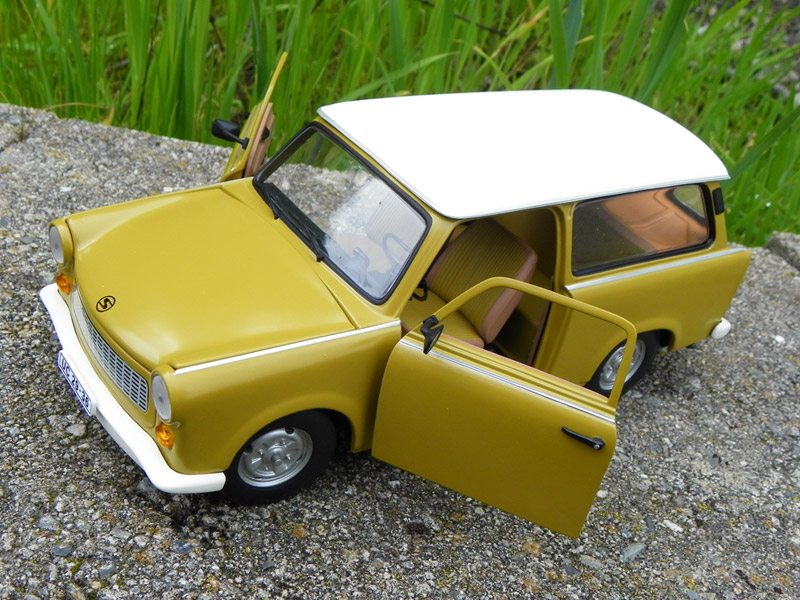 The Trabant model effectively captures the spirit of what a Trabant was, and I thought it fitting that I photographed it on a dreary grey, drizzly day in front of a retaining wall in my back yard. It's a depressing low-gloss mustard color with an interior that's a mix of similar tan and that weird pinkish "flesh" color they use for artificial limbs or crash test dummies. Curiously, there's one bright strip running the length of the beltline, perhaps one concession to style. Oh yeah, and jutting taillights that resemble tail fins. I believe it's a later model, specifically a 1989 if the Vitesse releases have any relation to this one.

Regarding detail, yes, I wish the rear hatch opened. It doesn't. The doors and hood open, but under the hood there isn't much going on. You have a fairly basic black molded engine and what looks like a white battery and brake master cylinder. Inside, the dash is basic and probably accurate. What, you wanted a tachometer? The light lenses have a nice texture to them, and the body is smooth and free of glaring casting seams. Tampo-printed details are cleanly applied and not from the Hot Wheels school of "close enough" that allows for smeared or misaligned decals. My only gripe is the grille, which is a flat piece printed with a bunch of rectangular "holes" instead of actual indentations. This may have been too difficult to mold, because the grille bars on the real car are very thin. The side mirrors and separate molded plastic door handles are a nice touch. To me they add value where Sun Star could have copped out and made the door handles a black-painted bump in the door and left the mirrors off entirely. 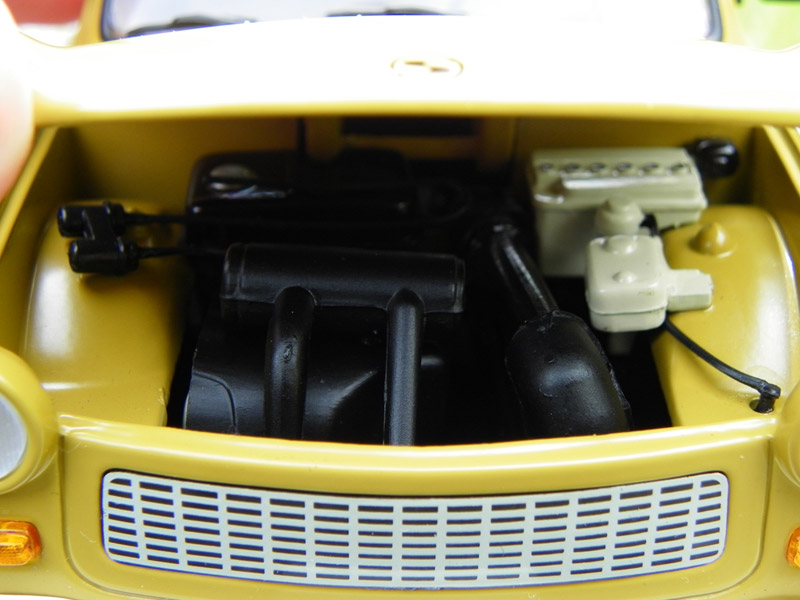 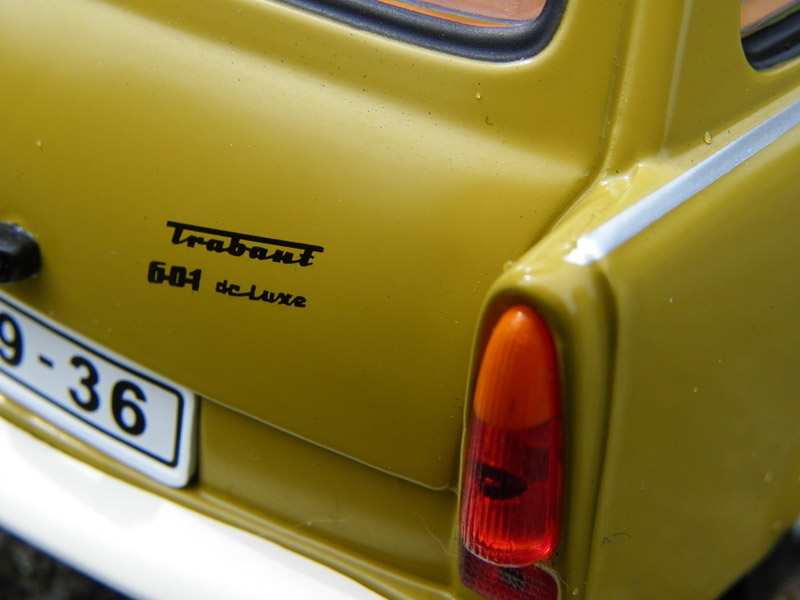 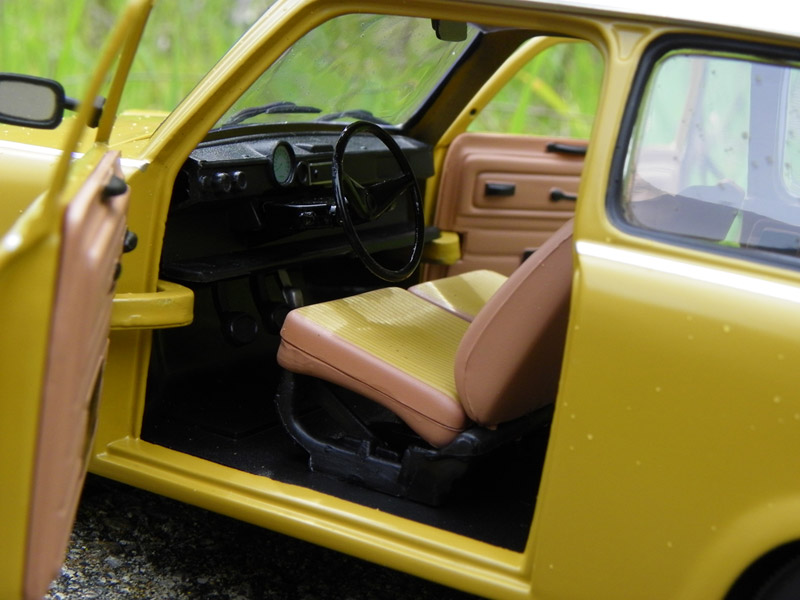 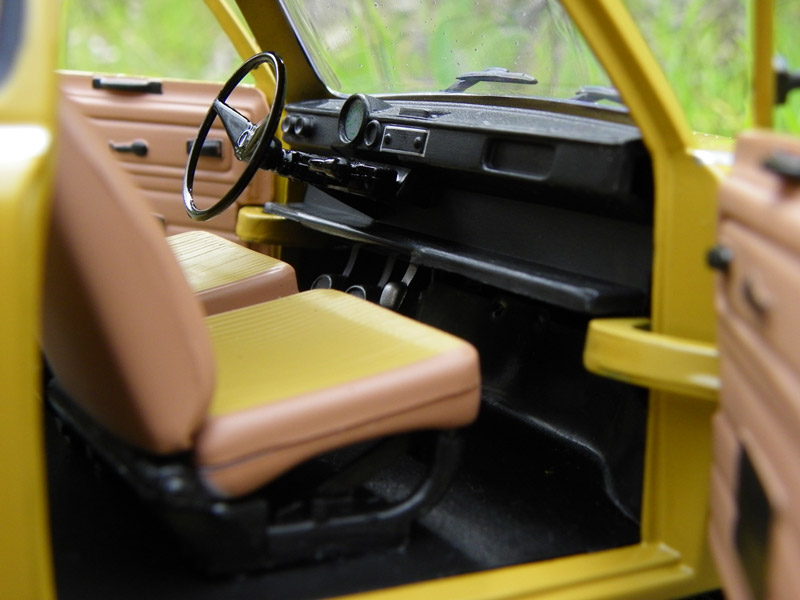 So, like a real Trabant, the Sun Star Trabi isn't terribly attractive, isn't overly expensive and exists mainly as a curiosity. It makes a great novelty addition to a collection. I'm hopeful that one day I'll pick up a 1/18 IST Models vintage VAZ Lada 2101 Zhiguli to go with it.
Posted by Jay Wollenweber at 12:00 AM