I dug deep in the archives for this one. I love early Mustangs, but I never wanted to feature a first-generation Mustang, especially not a 1965 notchback. Why? Because it's one of the most cliched "classic" cars. Everyone knows it, knows someone who has owned one, or owns one themselves. They're cheap, practical, quick and good looking. They're everywhere in California. Most of them seem to be resale red with chrome wheels and I don't give them a second glance.
So why am I featuring this one? Because I can. These are old pictures - look at the registration tags, for crying out loud, they're 2007. I happened upon this car while taking a walk over five years ago and decided to photograph it for a friend. Two years later I got a silly notion to start blogging and remembered I had these pictures. So here they are. 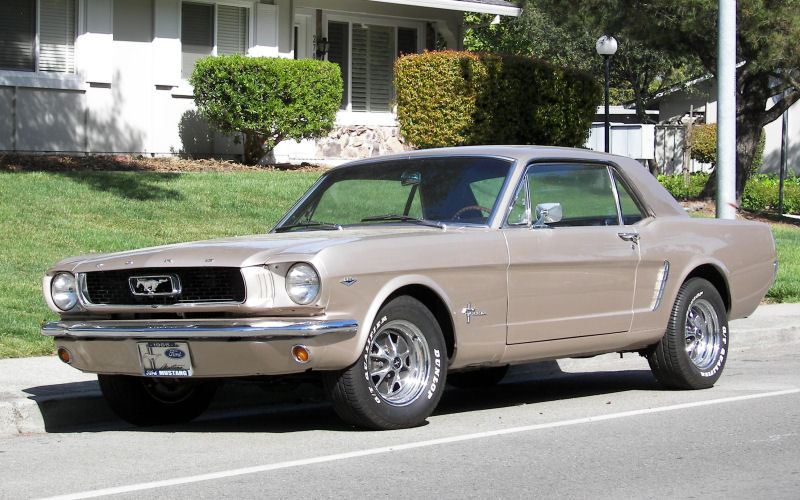 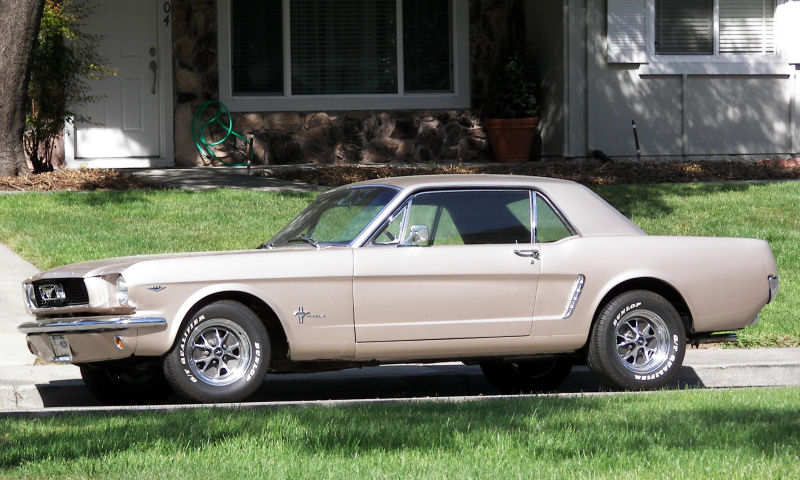 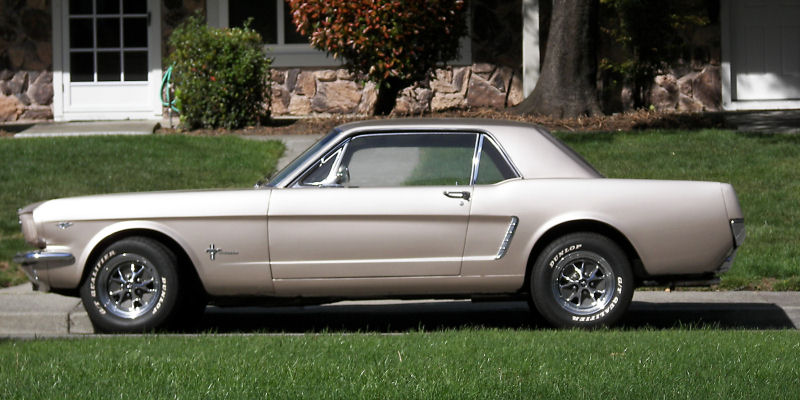 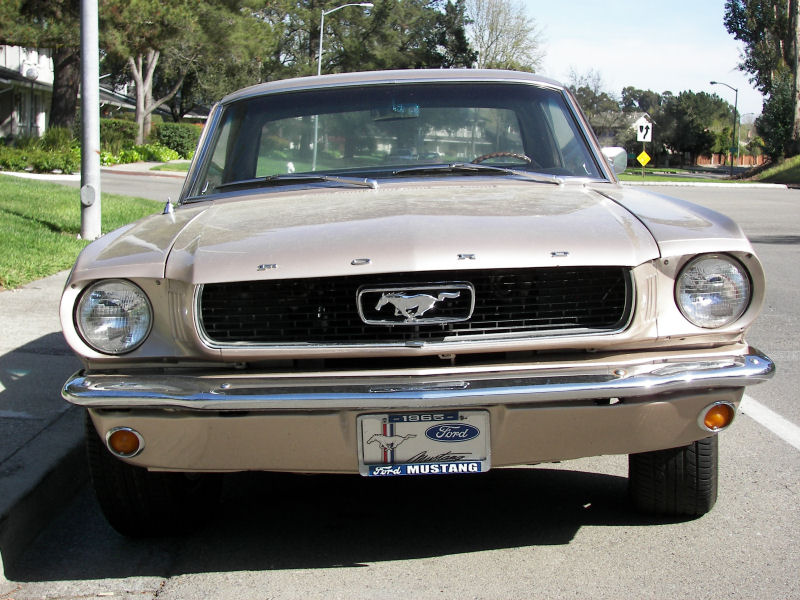 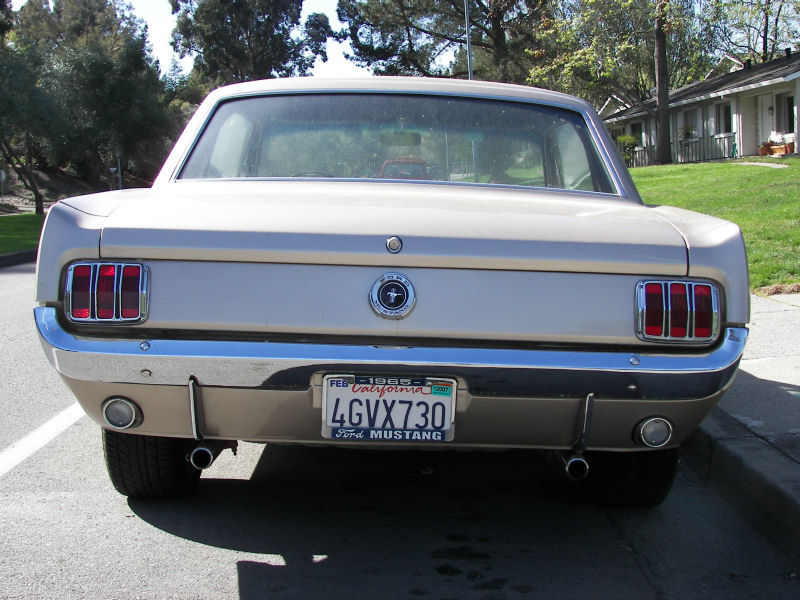 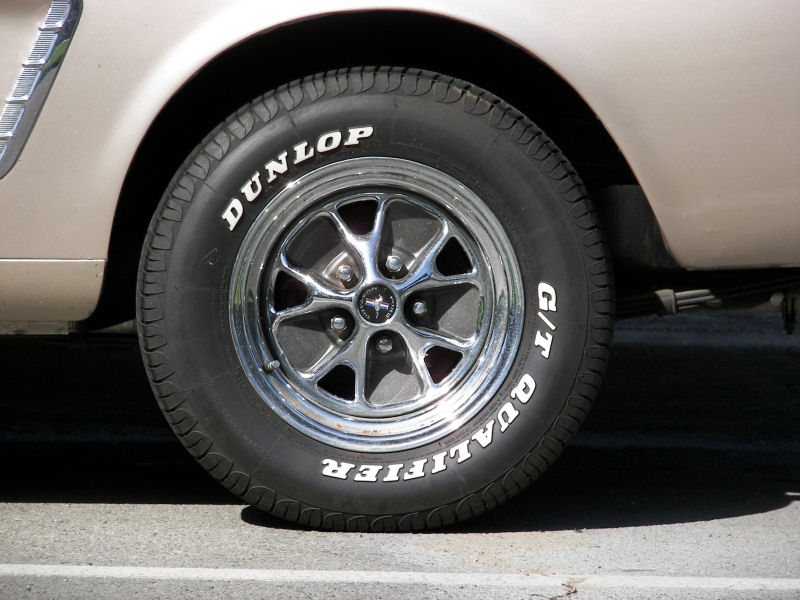 Usually beige is a horridly generic color to put on a car. In today's era every third car seems to be a shade of champagne/sand/taupe/tan/boring. Camrys are beige. Mustangs are supposed to be red, right? I'm sick of red Mustangs. I like this car in metallic beige. It's still an otherwise generic '65 Mustang notchback with a V8, but it's on this blog with its own feature and most other Mustangs of this vintage aren't.
This particular car isn't a correct restoration. The grille is a 1966 unit. In fact, I thought this was a '66 until I realized the chrome trim on the C-scoop is the '65 style and both license plate frames front and rear shout "1965 Ford MUSTANG". It appears to have a clean custom exhaust install and the optional backup lights. On some cars the backup lights would be omitted and special exhaust "trumpets" would be routed through the mounting holes. I never liked that look. I can't help thinking that the front valance looks a bit naked without the extra vertical bumper trim like is seen on the rear end.
For the most part, the body of this car looks to be in good shape. Unfortunately it appears to have some rust hiding in the bottom of the front fenders. These cars are notorious for fender and door rust since Ford decided to be cheap and not paint or apply undercoating inside the panels where moisture tended to accumulate. My dad's '66 convertible wears replacement doors and fenders due to this problem. His also suffered rocker and quarter panel rust because the former owner drove the car on Pismo Beach and didn't clean the salt out. The fact it was originally a Colorado car probably didn't help either. But I digress.
I doubt I'll feature another plain-jane Mustang like this again unless I see something that just knocks my socks off. It's happened before and it's usually something ridiculous that only I care about, but whatever. I feature what grabs my eye. Sometimes a little tan pony does the trick.
Posted by Jay Wollenweber at 12:00 AM