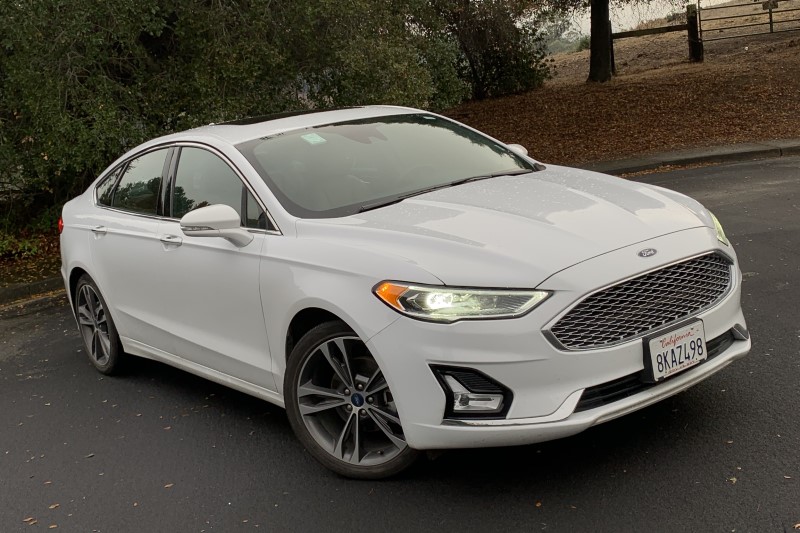 I have long been a fan of the Ford Fusion. When an all-new model bowed for 2013 as part of the "One Ford" plan uniting the U.S. Fusion with the global Mondeo, I liked the new car a lot. My favorite spec was an SE EcoBoost in pearl white. Fast forward to 2019 and I got to live with a white Fusion EcoBoost for a week. 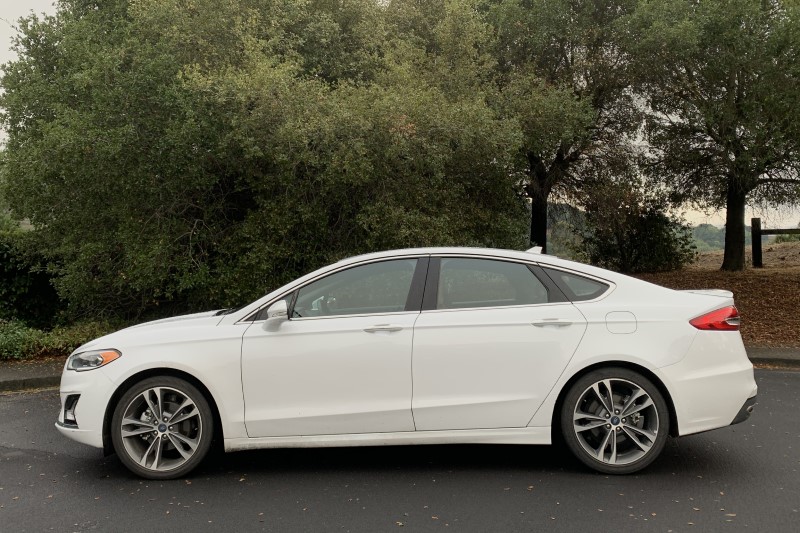 The plan was Disneyland. Beyond that, I wasn't sure. I expected four people and their luggage, but life is complicated and unpredictable. So when I walked into the Avis rental counter to pick up my car, we had two people traveling and the rest meeting us later or possibly not coming at all. The counter attendant offered two choices: A white Ford Fusion or a white Chevy Impala. The Impala was considered a free upgrade to another size class. I accepted the Ford and was pleasantly surprised to find a loaded Titanium model waiting for me out in the parking lot. 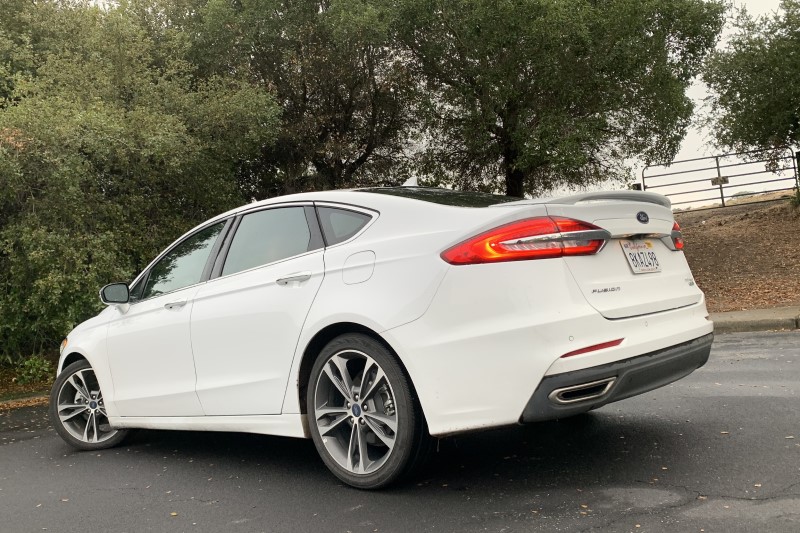 As rental cars go, this Fusion was pretty swanky. Spoiler, moonroof, 19-inch wheels, LED headlights and foglamps. Intelligent all-wheel-drive. Turbocharged 2.0 liter four cylinder engine making an impressive 245 horsepower and 270 lb ft of torque. Not too shabby. I wasn't a big fan of the Oxford White paint. It doesn't attract attention but also doesn't accentuate the car's lines the way pearl white does. The 2013 body design is showing its age, having been facelifted a few times with new lights and fascias. Inside is the real treat. I was greeted by dual eight-way power seats wrapped in perforated brown leather, offering power lumbar support and two driver seat position memory settings. Both seats were heated and cooled, a feature that spoiled me on the Buick LaCrosse I rented years ago. The Fusion also featured a heated, leather-wrapped steering wheel. The car had automatic dual-zone climate control for maximum comfort, and a handy "Max Defrost" setting to thaw the windshield in a hurry. 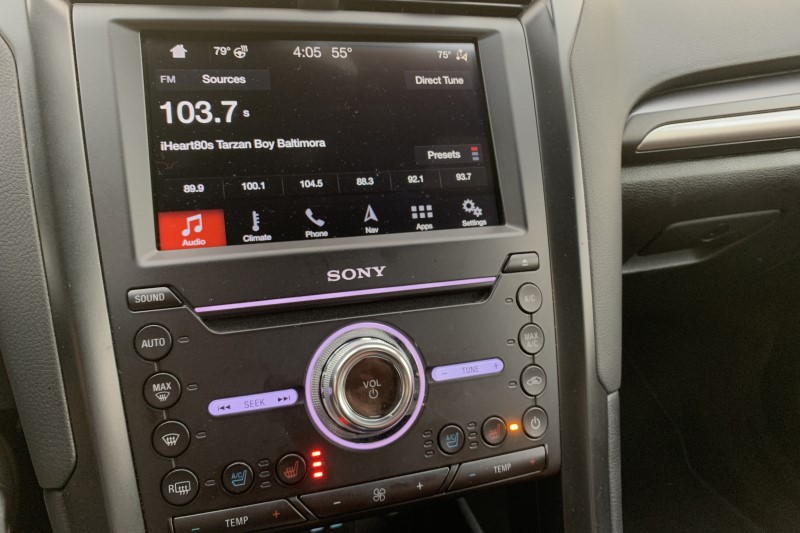 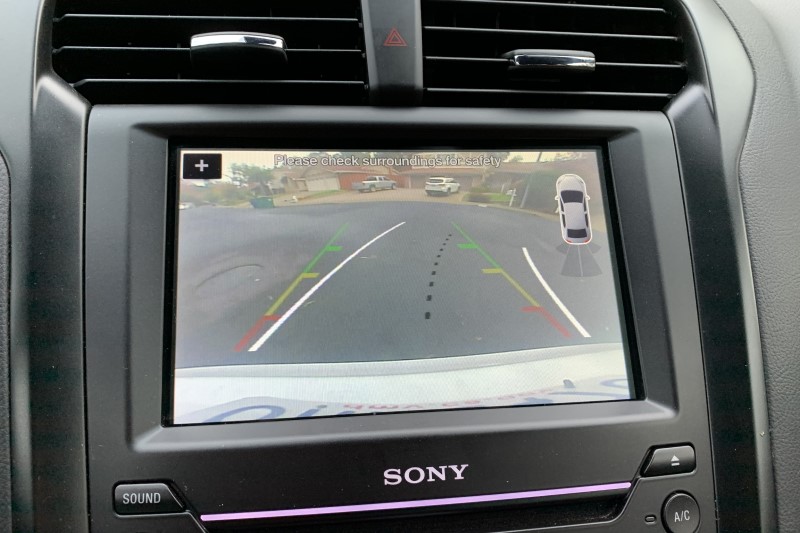 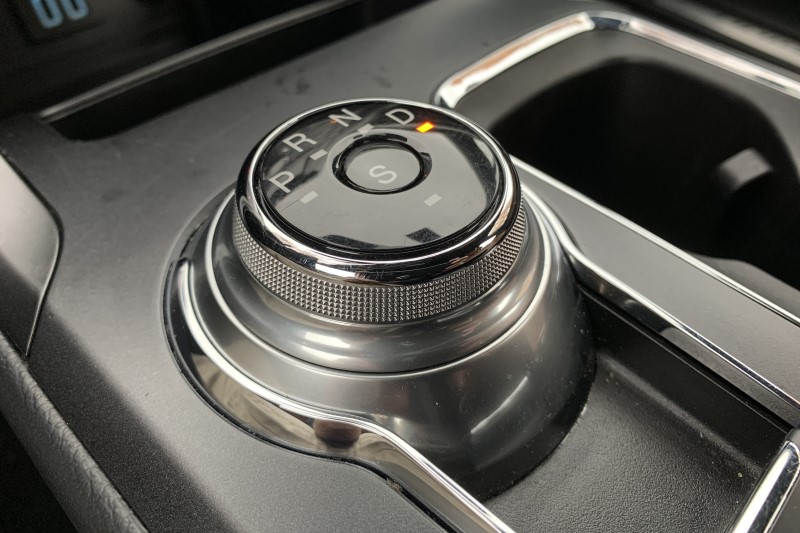 The biggest disappointment was the primary infotainment menu. It had a nice large touch screen and several levels of menus. I never did figure out how to do everything, and the climate control screen was the worst. It was easier to fiddle with the center stack buttons until they did what I wanted versus wading through menus. It took me a day of driving the car to find the setting to turn off the heated steering wheel. I also did not like the grabby brakes, and strangely hard shifts when accelerating very gently. It felt like the car was lurching, as if someone was bumping the car from behind. It liked nice solid acceleration inputs and would drive smoothly when you put your foot into it. I did not particularly enjoy the rotary knob gear selector mounted on the console, or the electronic parking brake, but eventually got used to them both -- somewhat. One final petty annoyance is Ford's modern interior sound design. I found the turn signal sound to be particularly irksome. 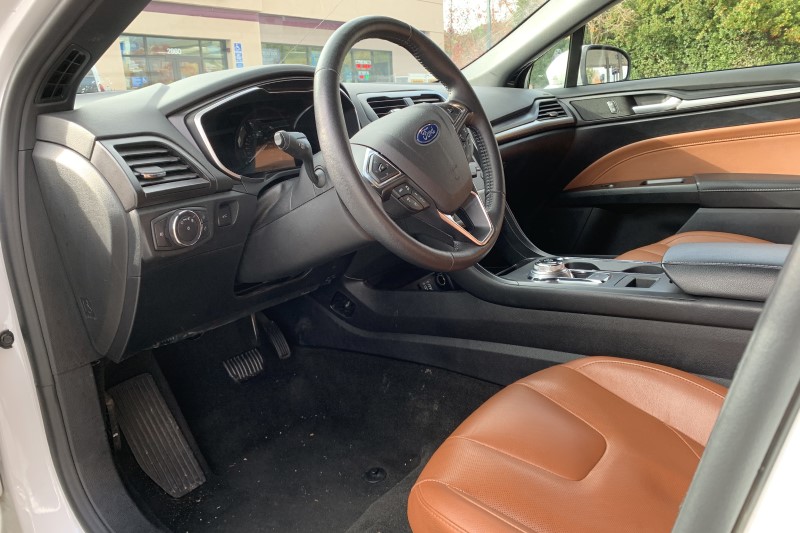 Interior room was adequate, though I had to drive with the seat bottom all the way down. I am 5'10" and my dad, who is a little over 6 feet with a long torso, can't sit in a Fusion comfortably. My 5'6" mother's driving position left me literally pressed into the car's roof, prompting her to liken it to Alice in Wonderland when we switched drivers. The 8-way seats offer a lot of options for accommodating various body types. My friend said the back seat was acceptable and didn't complain on the six-hour drive back from Anaheim. I found the front seat comfortable enough for long distance driving. Weirdly, the driver seat motors forward about an inch when you start the car and motors back when it shuts off. I don't know if that's for aiding ingress/egress or a memory setting from a prior renter. It was mildly annoying the first few times but I got used to it. 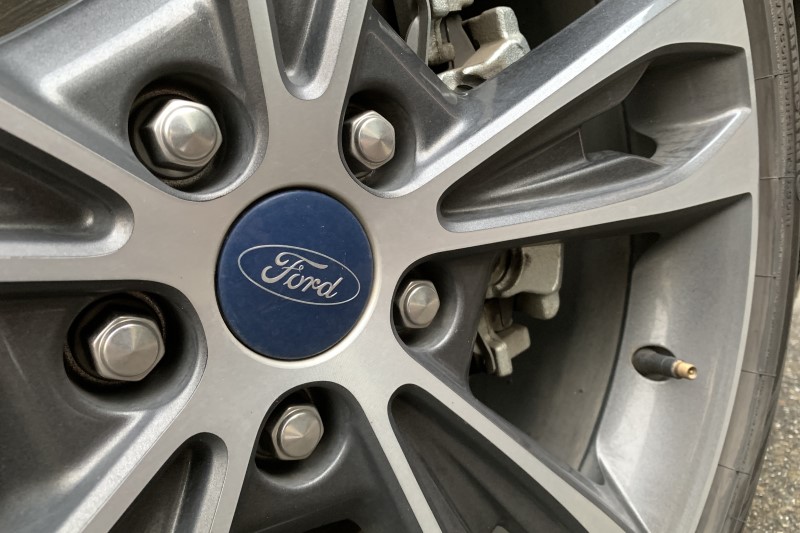 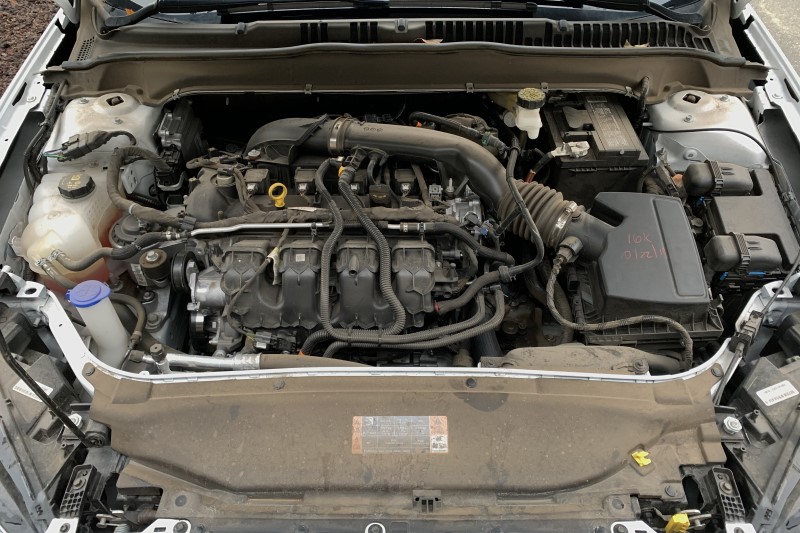 The things I liked best about the car, ironically, were things I usually eschew as creeping autonomy. Adaptive cruise control is honestly amazing. When you've been on the road for six hours after spending three straight days at Disneyland, maintaining a constant speed and following distance is not always the easiest. The adaptive cruise accommodated my tiredness and the car even suggested rest at one point with a small pop-up message and icon of a cup of coffee on my driver info display. If you still get too close or someone is being an idiot -- including if that someone is you -- the car flashes a strip of red LEDs across the dash top directly in front of the driver and sounds an alert to warn of collision risk.

The other great feature was rain-sensing intermittent wipers. It was a surreal feeling turning the wipers on and then not having to touch them again, as they would adjust their speed independently and even turn off on their own once the rain had passed. Other assists included automatic lights with auto-dim high beams, a lane keeping and blind spot monitoring system, parking sensors with audible and visual proximity warnings and a now-standard backup camera. Many of these driving assists could be toggled at will using a series of menus in the instrument cluster, even on the fly while driving.

The same menus could be used to display speed, fuel economy, fuel level, range, engine temperature, power distribution to the AWD system, and/or a virtual analog tachometer. The car had a lot of toys to play with. A second display to the right of the speedometer (the only "real" gauge on the car) offered radio station information; navigation data such as compass direction, nearest cross street and speed limit; or phone data. I didn't pair my phone with the car to see how well the Bluetooth worked. Some features were locked out when the vehicle was in motion, such as inputting navigation destinations or pressing the seat memory button. 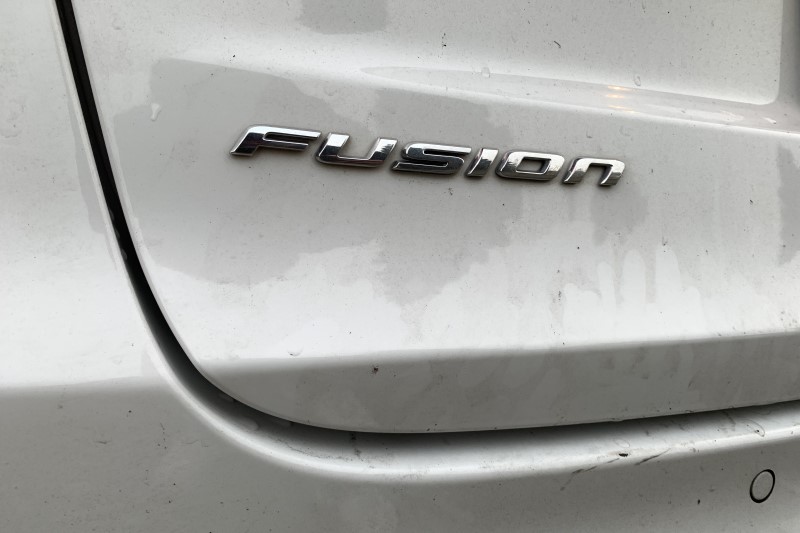 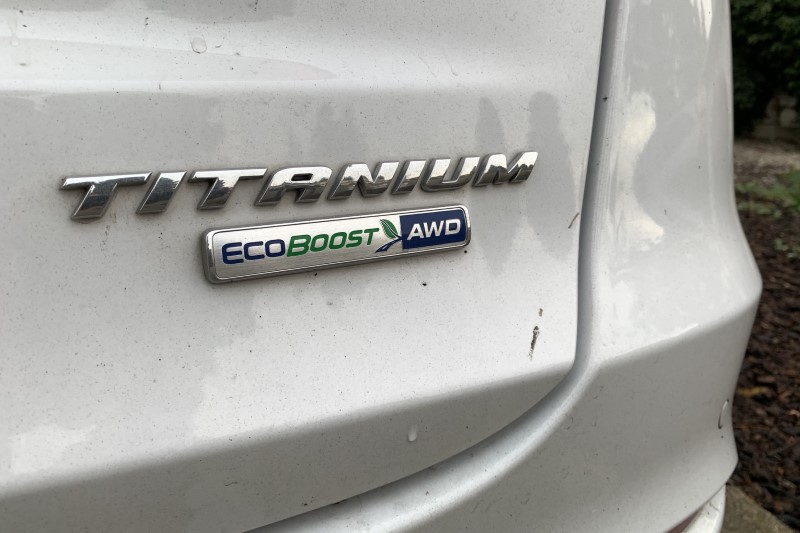 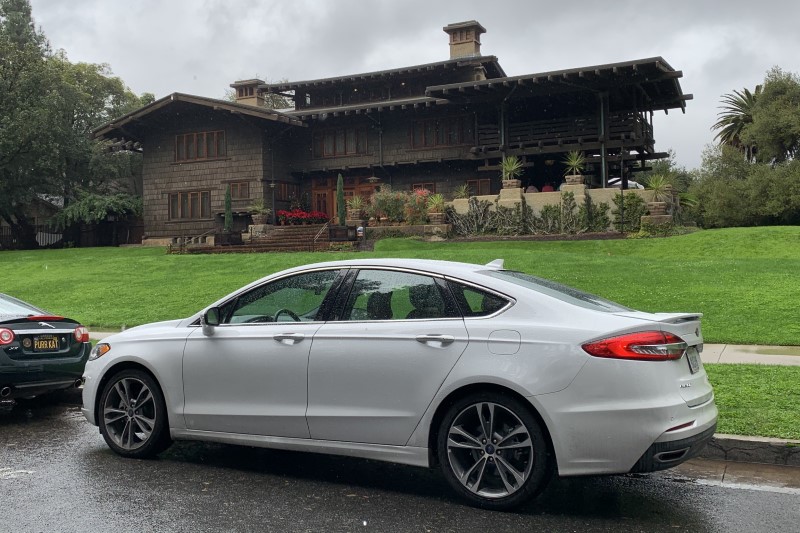 To sum up the Fusion Titanium AWD, it was a very good highway road trip car. My average fuel economy over the 900+ mile round trip was 27.6 mpg. The trunk is deep and holds three people's luggage with ease. Visibility is so-so, and the suite of technology tries to make up for the car's (or the driver's) other shortcomings. The turbo engine was excellent for highway on-ramp launches and passing. This car is a pretty good sleeper considering you can get the same body with a plug-in hybrid powertrain. If you really want a screamer, see if you can find a Fusion Sport with the 2.7 liter EcoBoost V6 out of the Lincoln MKZ. Imagine your midsize family sedan with 325 hp and 380 lb ft of torque, and AWD to help distribute power output when needed so it doesn't torque steer itself into a ditch. Sounds like fun.
Posted by Jay Wollenweber at 12:00 AM