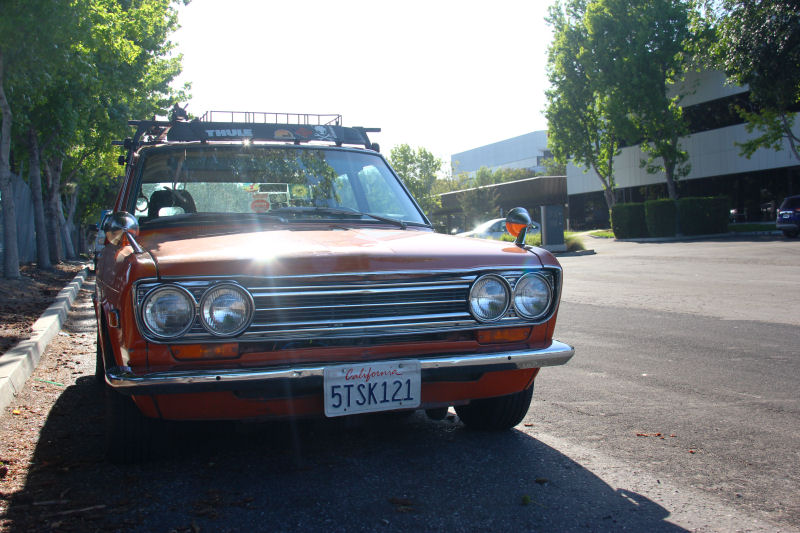 UrbanDictionary defines dropping a dime as snitching on someone, ratting them out. It's a reference to the old practice of putting a coin into a pay phone to make a 10-cent call. I contend this could be an alternate definition of the term. A Datsun 510 is also often known as a Dime in the owners' community, and this one definitely looks like it's been dropped. 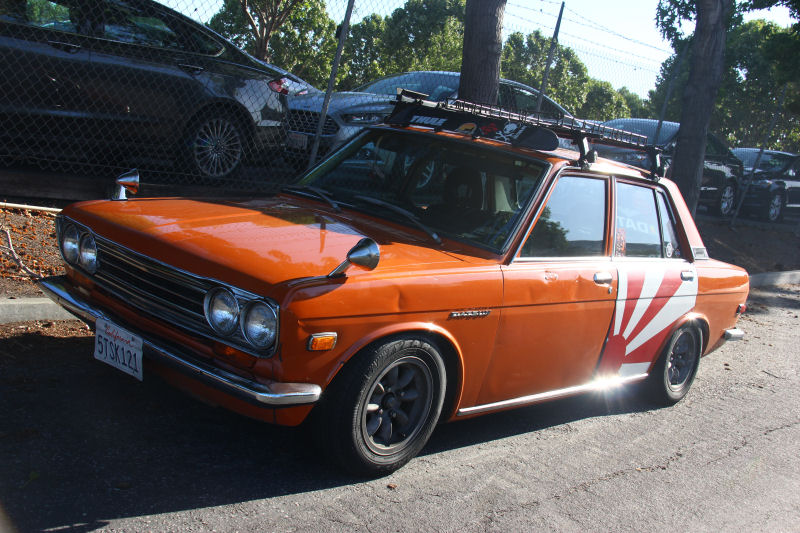 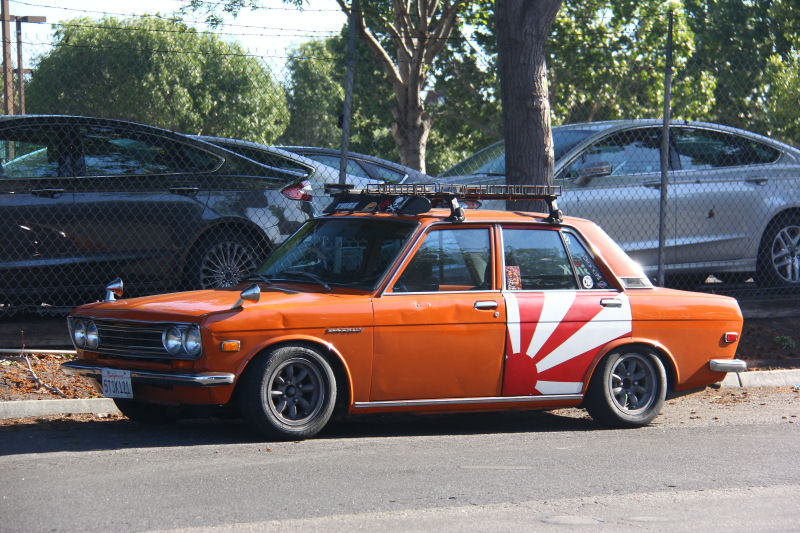 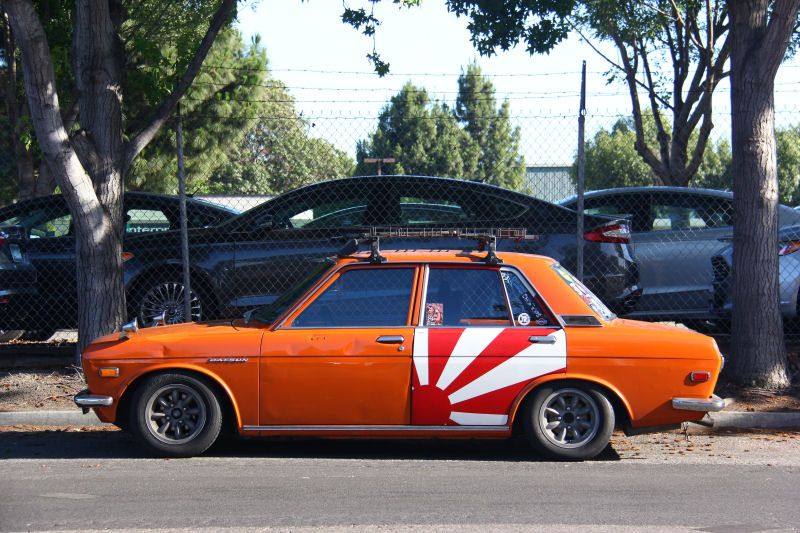 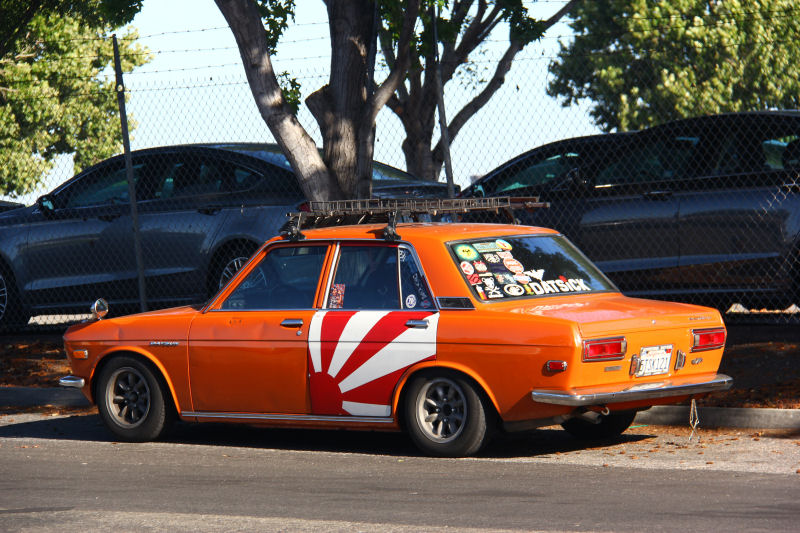 I've always been partial to the Datsun 510. What started as a fun little Japanese economy car in 1969 has become a fun little race car today. The 510 is relatively hard to find in good condition thanks to rust issues and so many of them being turned into racers over the years. This 1972 sedan has come a long way from its humble origins as a factory automatic grocery-getter. 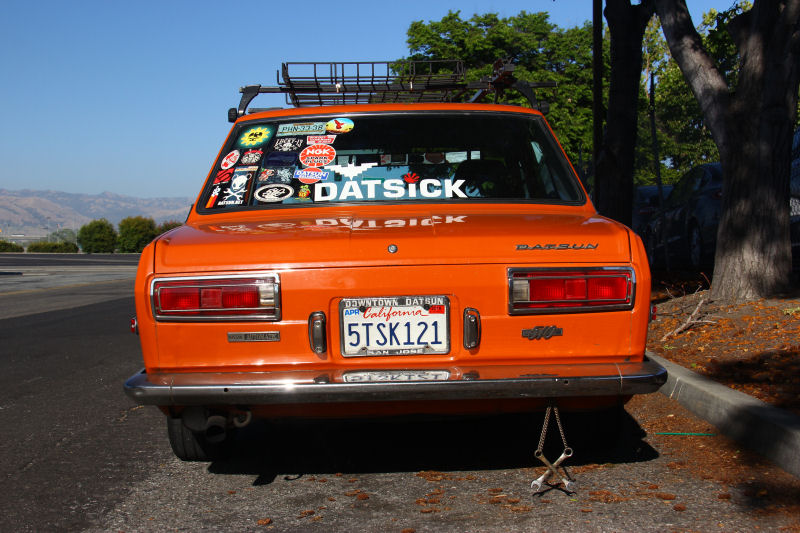 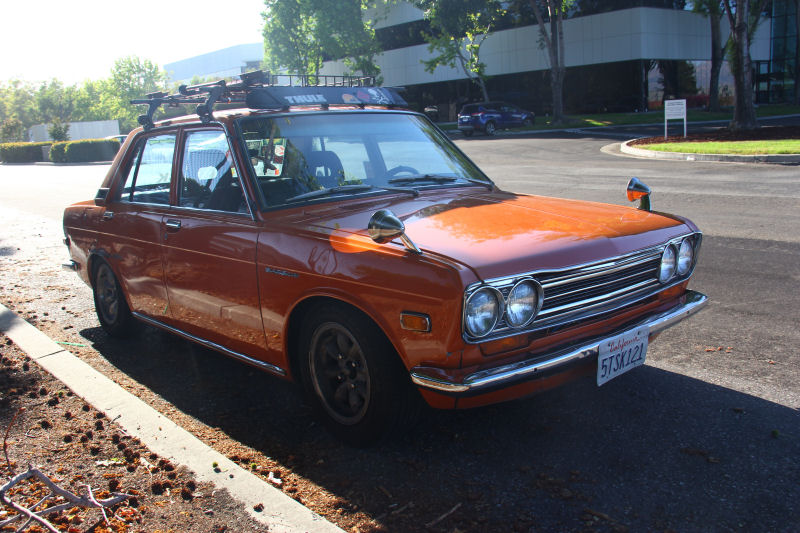 I generally don't care for "stickerbombed" cars but in this case I didn't know what model year it was until I Googled some of the stickers and discovered pictures of this car on someone's Instagram, then found some of the owner's posts on a Datsun forum. According to the owner the car has had a Nissan KA-series 2.4 liter engine swap, and I'm guessing a 5-speed manual transmission judging by what I saw through the window. I also seem to recall there were photos of the owner's family on the dash and that's the kind of privacy I did not wish to violate with my camera. You'll have to use your imagination to guess what the interior looked like, but it looks like it has more modern seats installed. 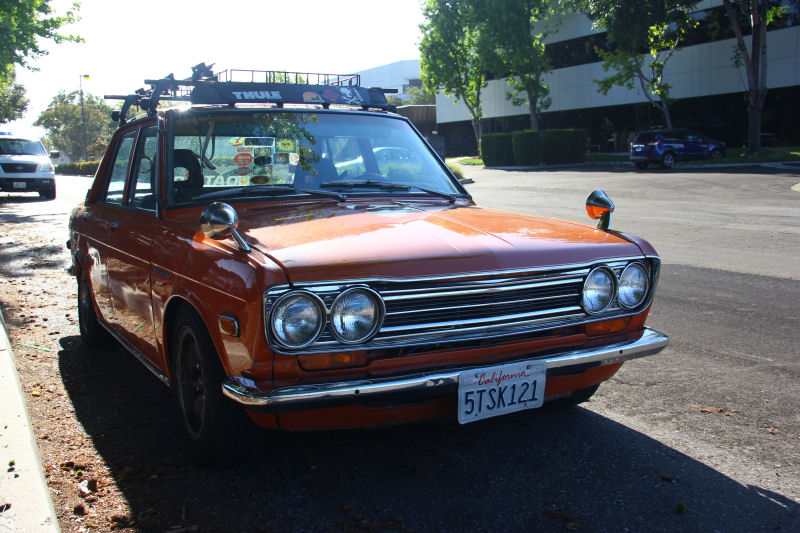 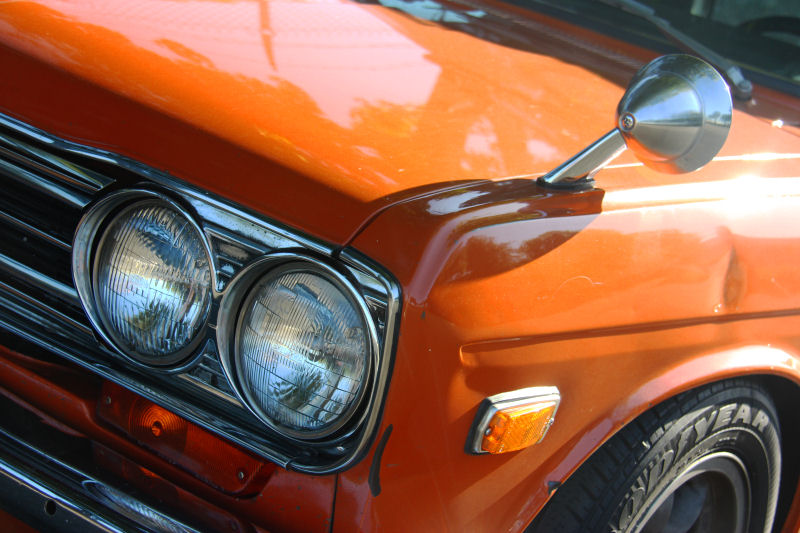 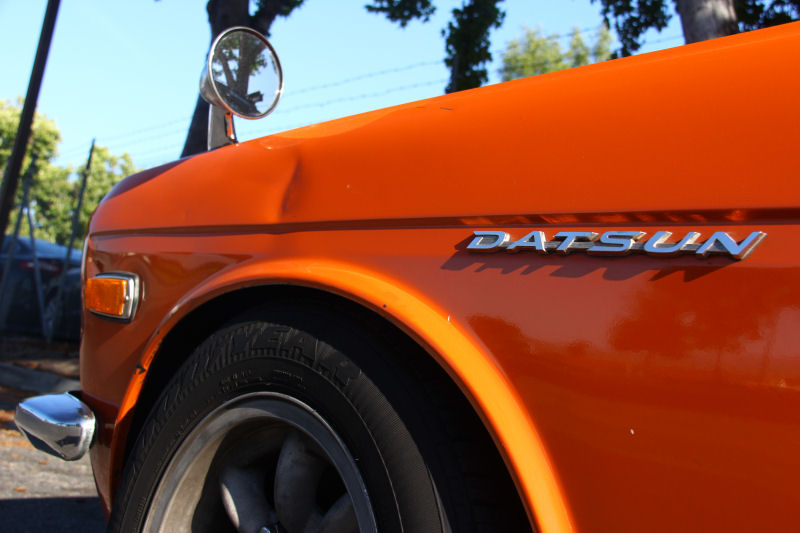 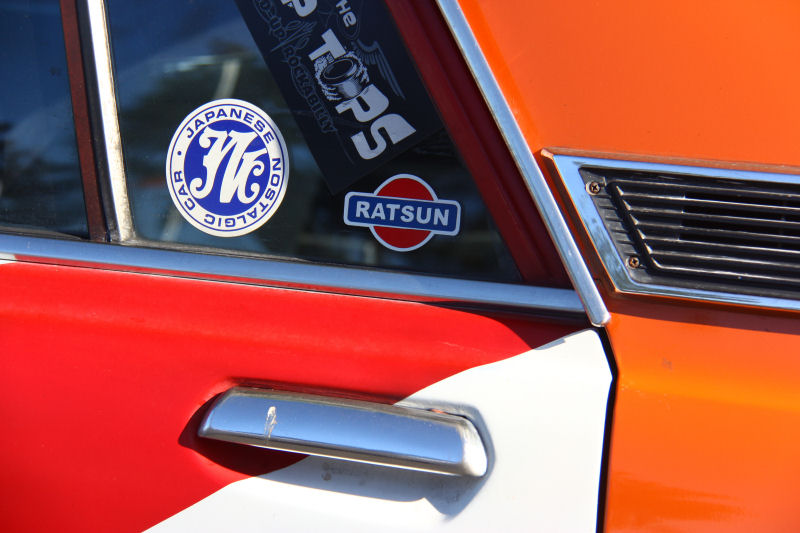 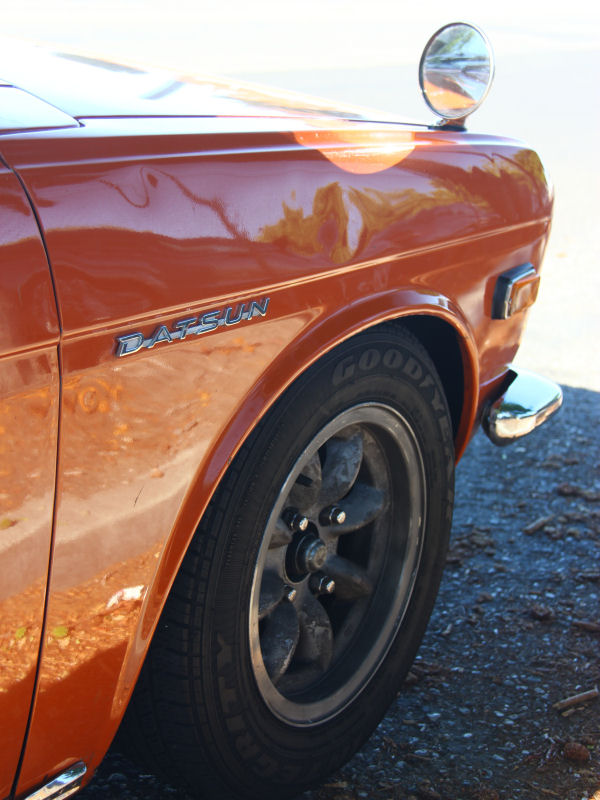 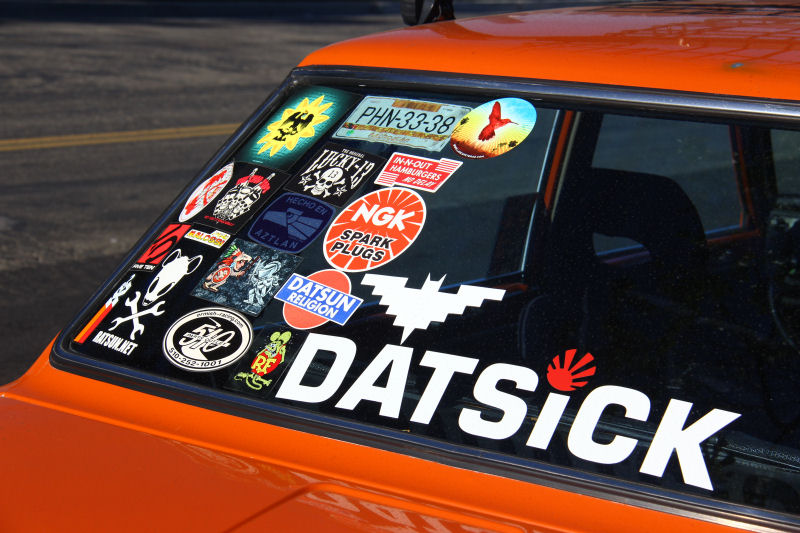 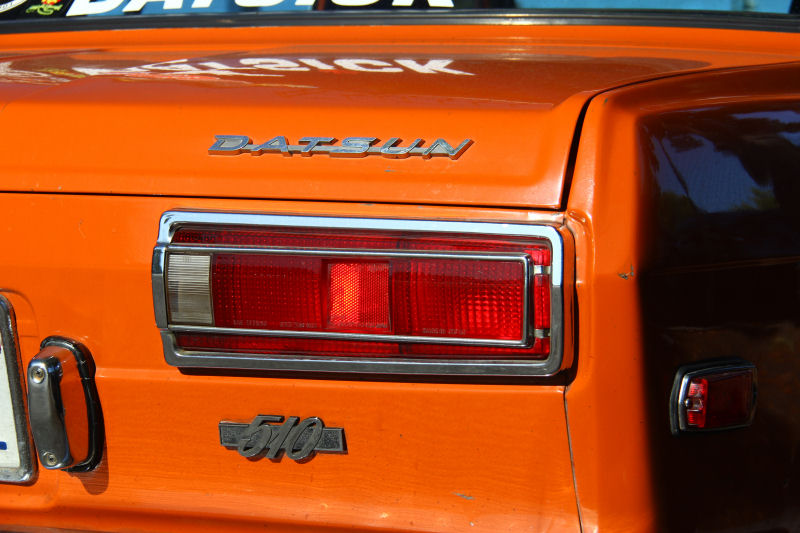 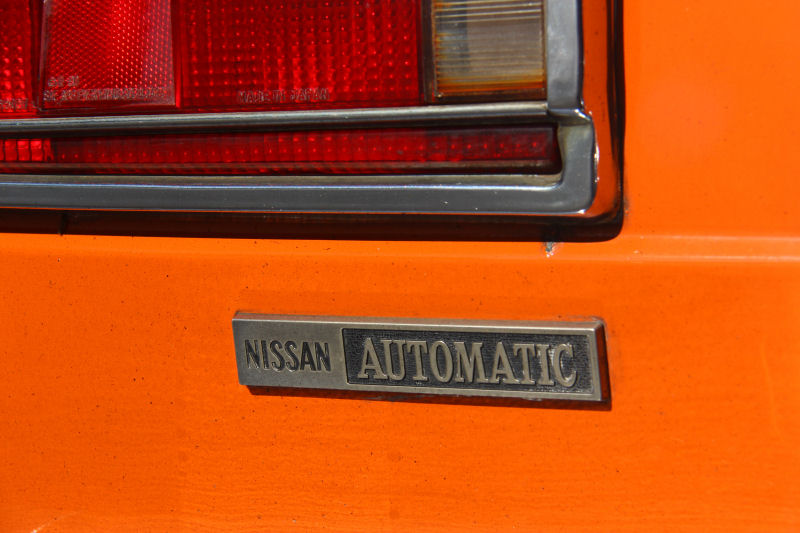 The orange paint may or may not be stock, though the giant Japanese rising sun on the passenger door is obviously custom. Twin chrome fender mirrors are custom as well, recalling the JDM (Japanese Domestic Market) tradition of installing rearview mirrors in that location. The wheels are 13-inch versions of what I've seen called "Panofsorts", a catch-all term for the very similar style of rim that looks like the Panasport, RS Watanabe or Konig Rewind. Up top, a Thule roof rack completes the package. I like that the owner has kept the old license plate frame from Downtown Datsun in San Jose, and the original "Nissan Automatic" badge. They're small touches that bridge the past and present as reminders of the car's history as it zooms into the future with a youthful enthusiast owner.

Photographed June 2015
Posted by Jay Wollenweber at 12:00 AM