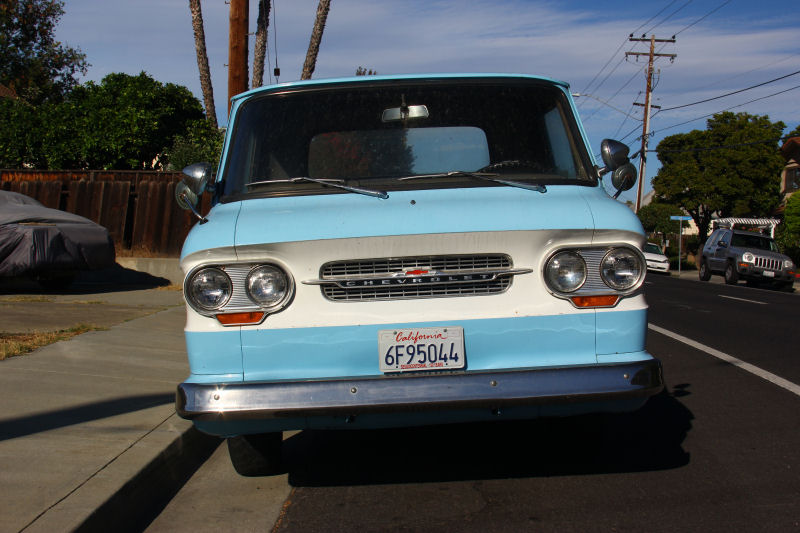 It's the first day of a new year, when we look forward to the potential for great new things. In the spirit of going forward, today's feature is a forward control Chevy Corvair 95 Rampside pickup. 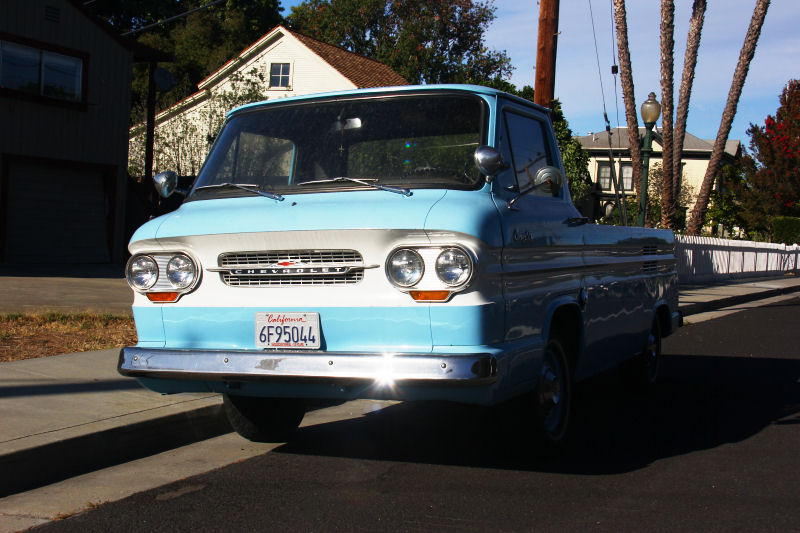 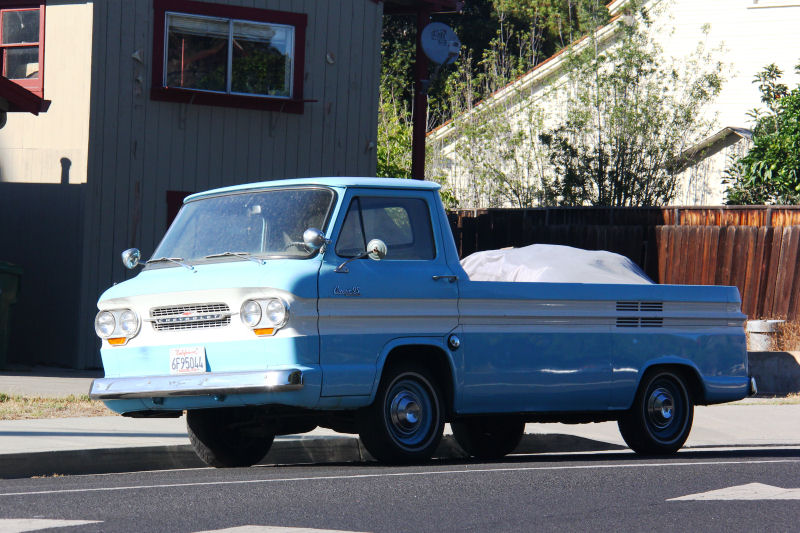 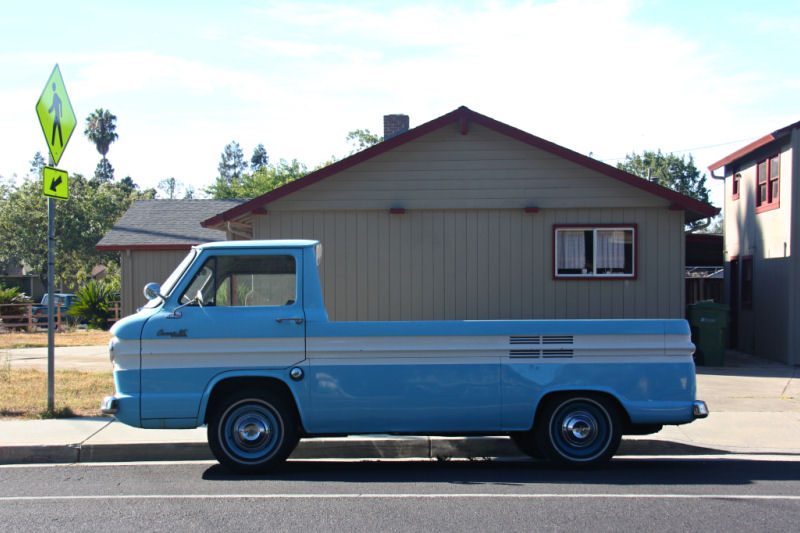 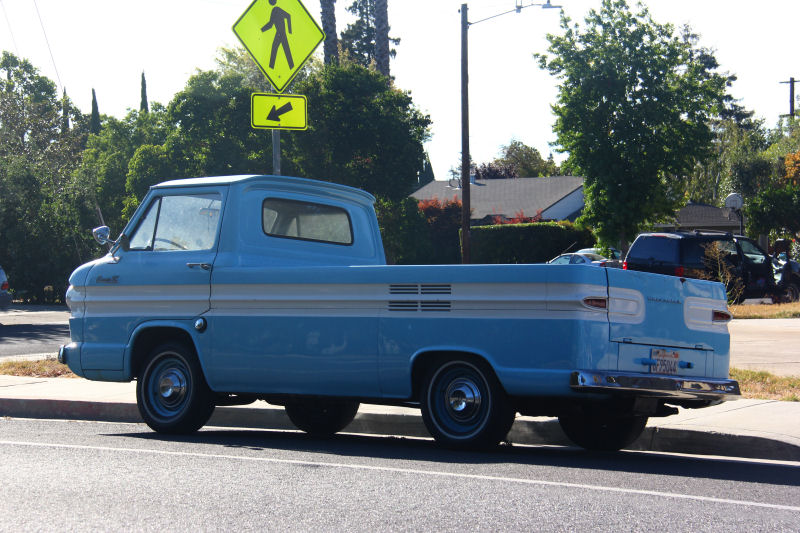 Forward control refers to the vehicle's layout in which the driver sits atop the front wheels as in a van, and the steering column is mounted ahead of the wheels. This was a relatively popular configuration for van-based light trucks like the Volkswagen Type 2, Dodge A100, Ford Econoline, and other off road trucks like the Jeep FC, Land Rover FC and Steyr Pinzgauer. Forward control pickups are still popular in places like Japan where small pickups based on one-box kei vans like the Suzuki Carry and Honda Acty thrive. Such vehicles are for when maximum cargo space is key and a full-size truck isn't an option. 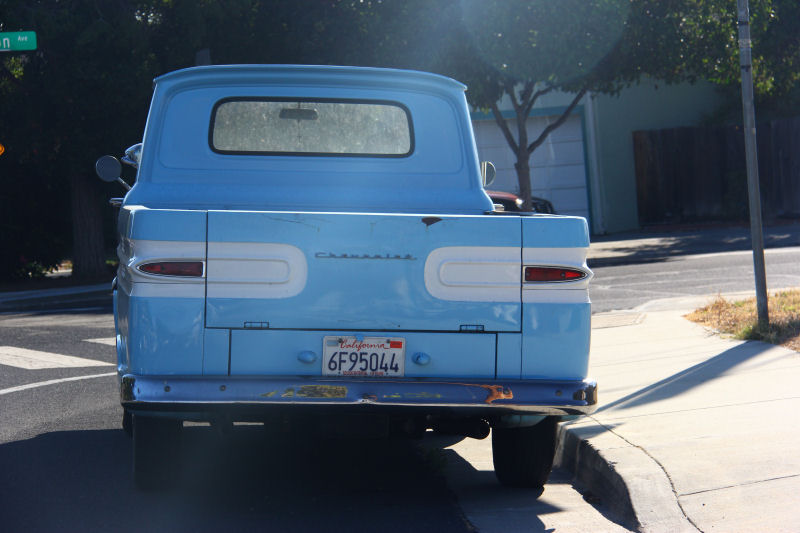 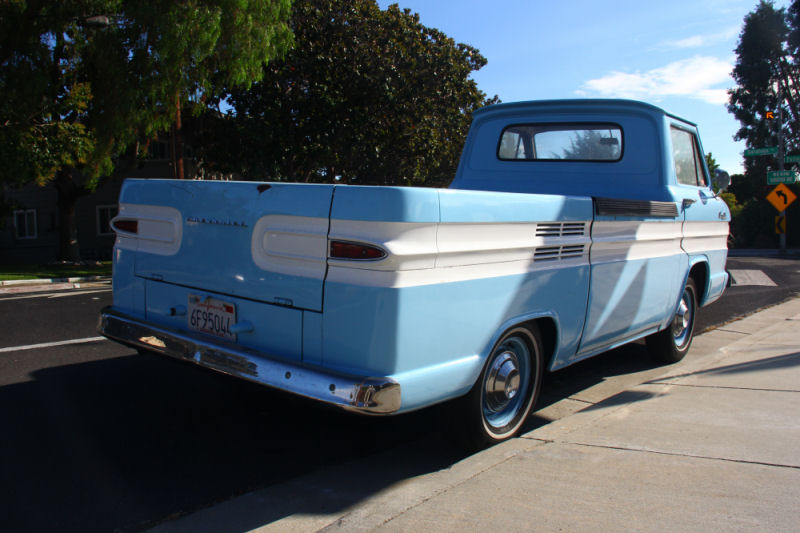 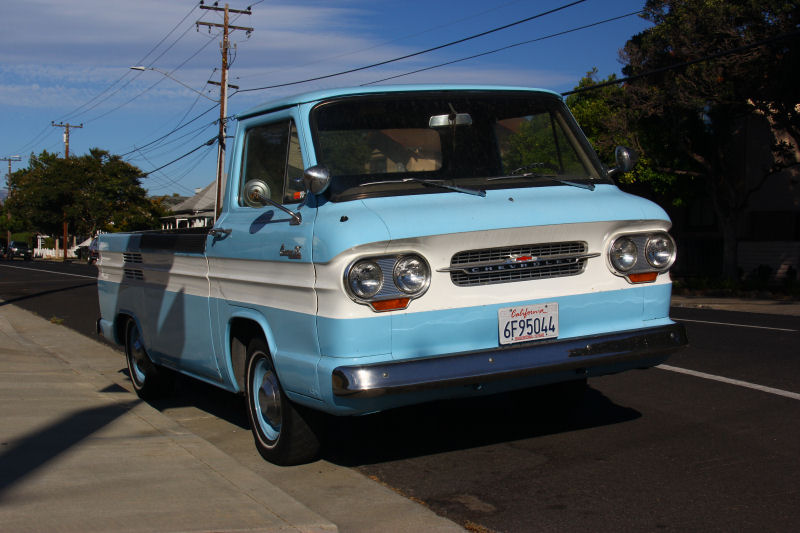 For some time now I've wanted to photograph a Corvair pickup, and hope to eventually complete the set with an example of every Corvair body style. The Rampside pickup is an interesting and innovative vehicle even among Corvairs. Produced between 1961 and '64, the Rampside was built with an air-cooled flat six engine in the rear under the load floor. One of its main competitors was the VW, which featured three panels on the sides of the truck bed that hinged down individually. The Corvair offered a conventional pickup bed with high sides and a rear tailgate, the Loadside; and the Rampside version seen here with a large ramp on the right side that hinges down for easier loading and unloading. Unlike a regular pickup truck, though, the Corvair's engine housing made a truly flat bed floor impossible. Instead the bed floor was made extra deep in the center, just 14 inches off the ground. 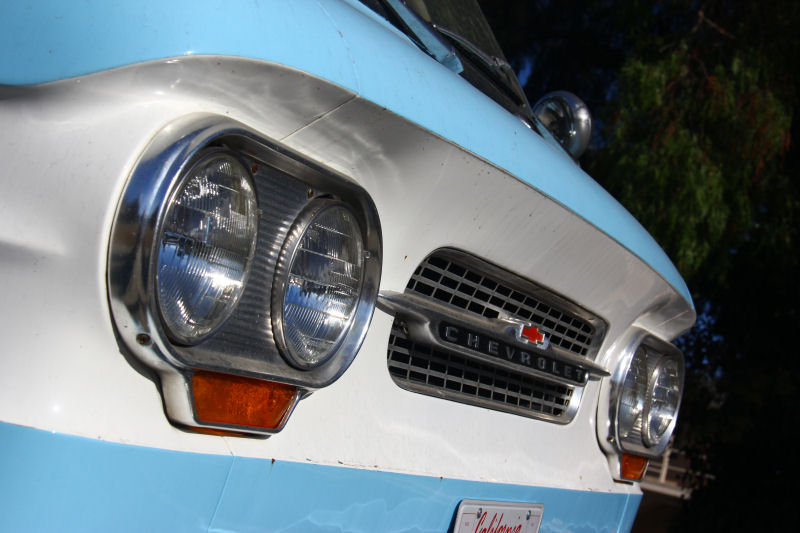 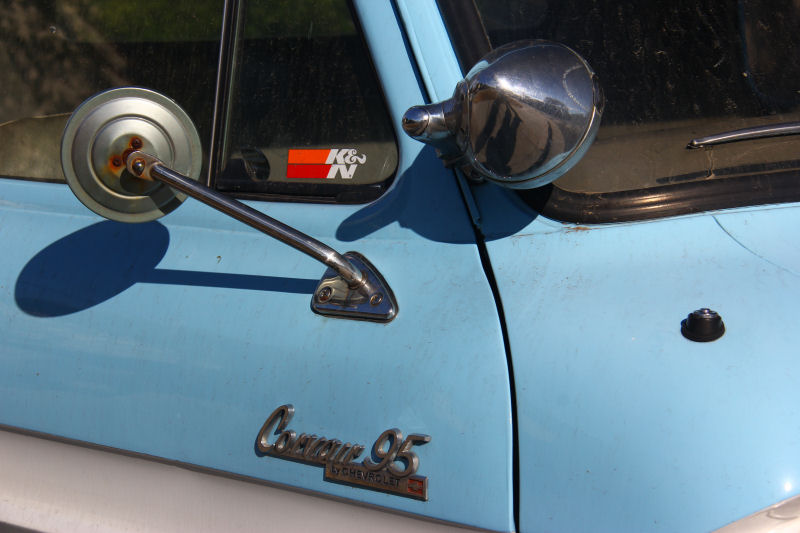 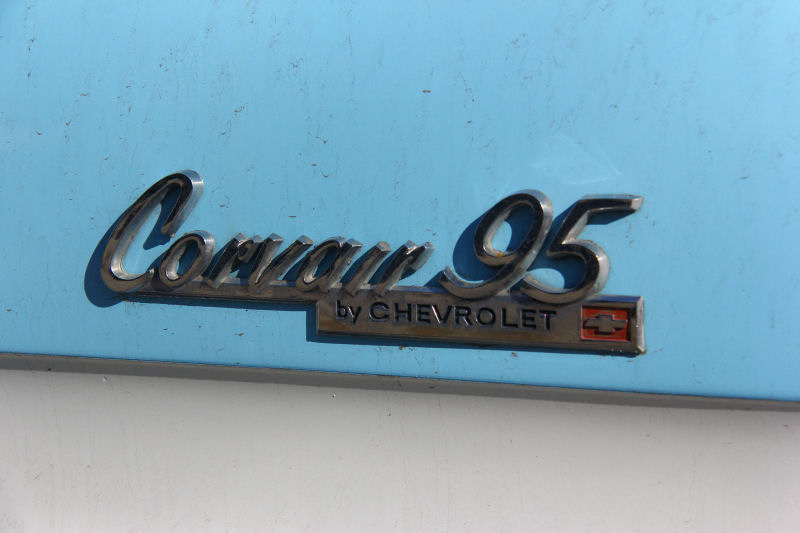 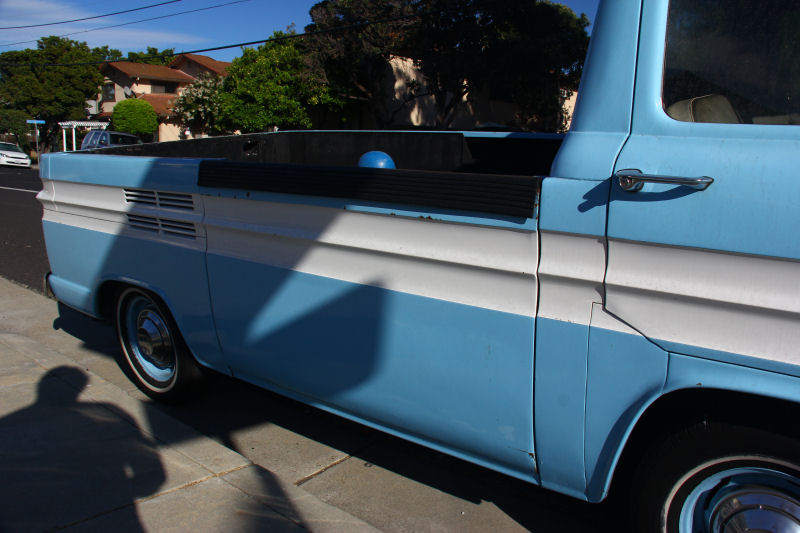 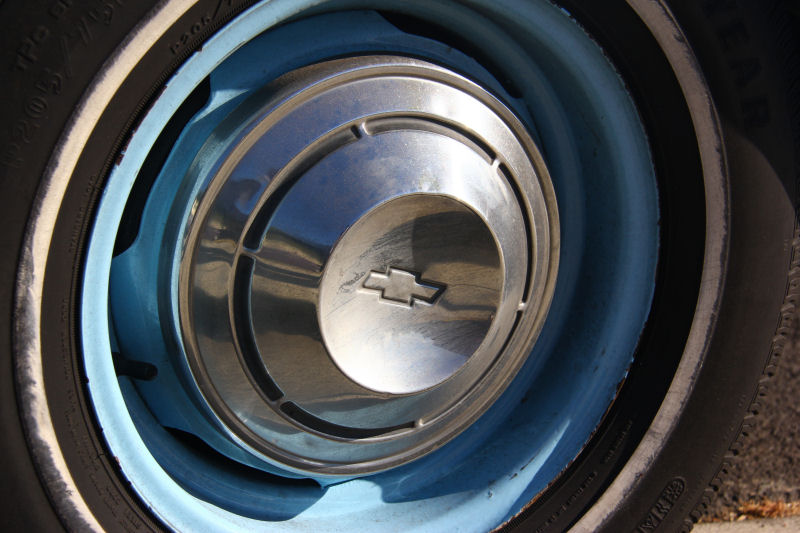 This truck is a rare rig, one of the later Rampsides. Based on the badging and design of the rear engine access hatch, I'm guessing it's a 1963 model. That would make it one of 2,046 trucks built that year. It's a well equipped pickup in a handsome color scheme of what looks like Brigade Blue and Cameo White. I don't know if the twin spotlights are factory but the rest of it looks very original and well taken care of. I like the skinny whitewalls on the body color steelies with chrome center caps. I like that this Rampside offers unique utility with a touch of class. The new year's off to a good start.