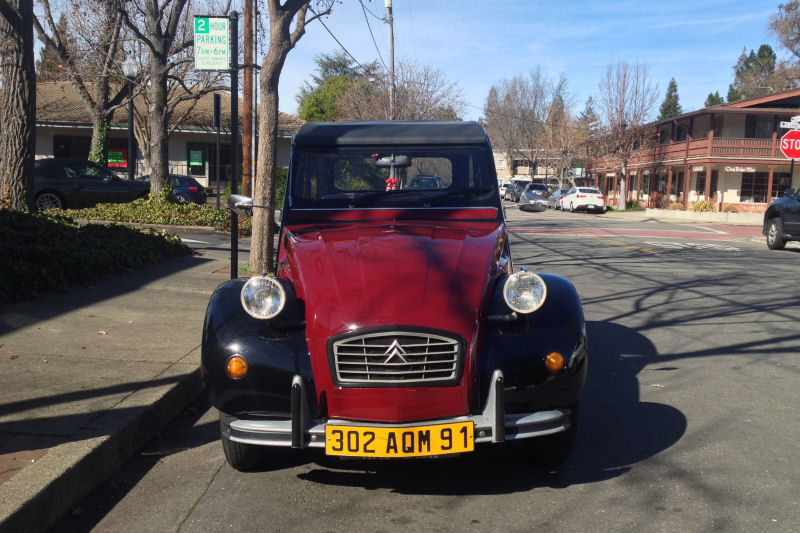 One of the things I like about researching for this blog is deciphering license plates. The seemingly random letter and number patterns, various colors and shapes tell a story about the car they're installed on. Sometimes an online resource like California's smog test database yields the model year of an unusual older vehicle. But when it's an import from another country, especially a European model that was built for a long time with few obvious visual changes, having an original plate gives more clues about it. Case in point here with this Citroën 2CV I stumbled upon in Danville. 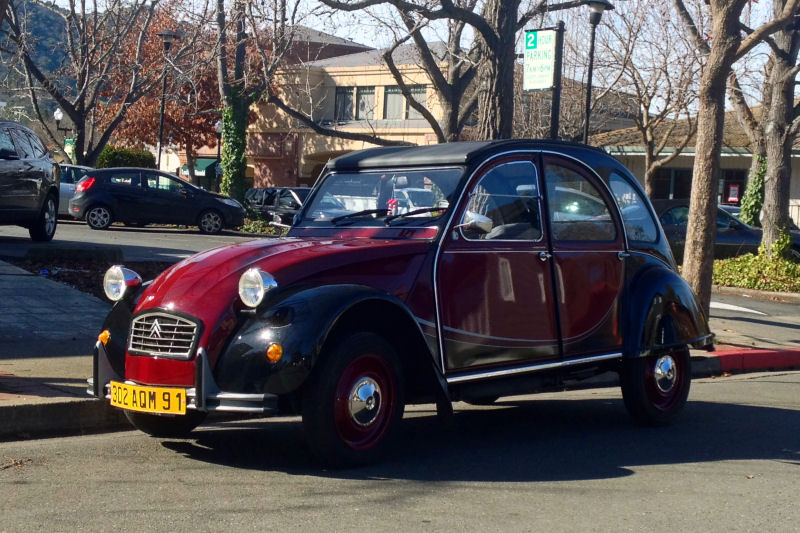 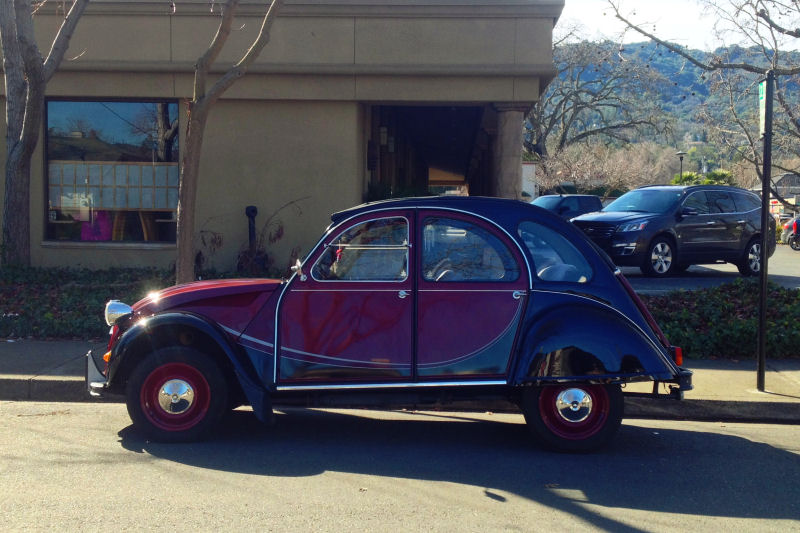 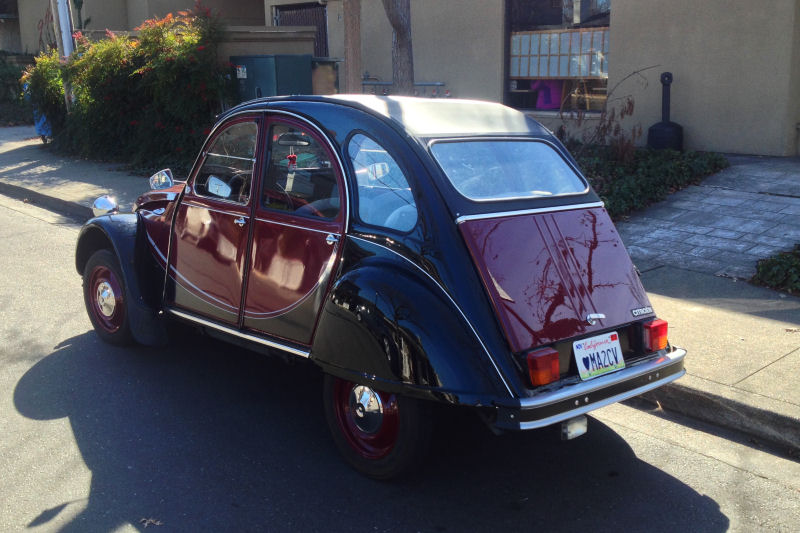 Crazily enough, I think this is the first Citroën on California Streets that was not photographed in San Francisco. Nearly all of the French cars I find hail from the city of hills and fog, with a few popping up in "quirky" areas such as Berkeley and Santa Cruz. Downtown Danville is more "small town America", yet located just a couple of miles from the world-famous Blackhawk Museum and acres of very expensive homes. This downtown area also hosts two hot-rod shows and a Concours d'Elegance every year, and I have never seen this little 2CV at any of them. 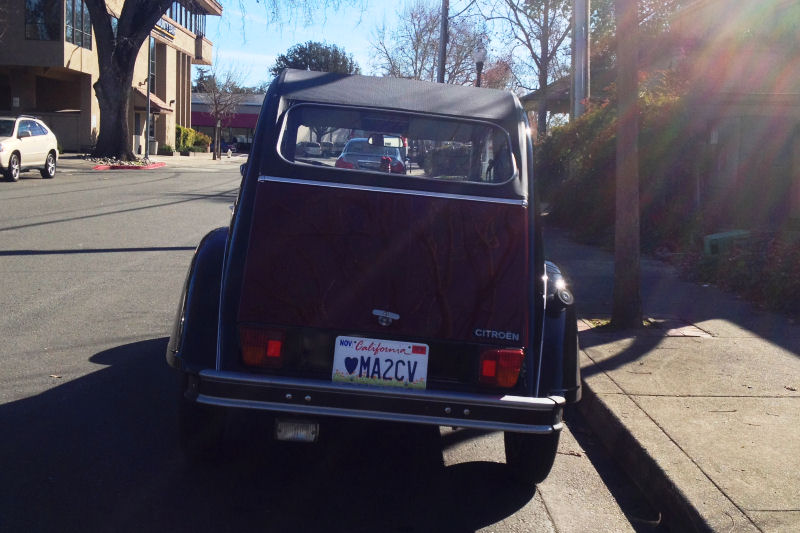 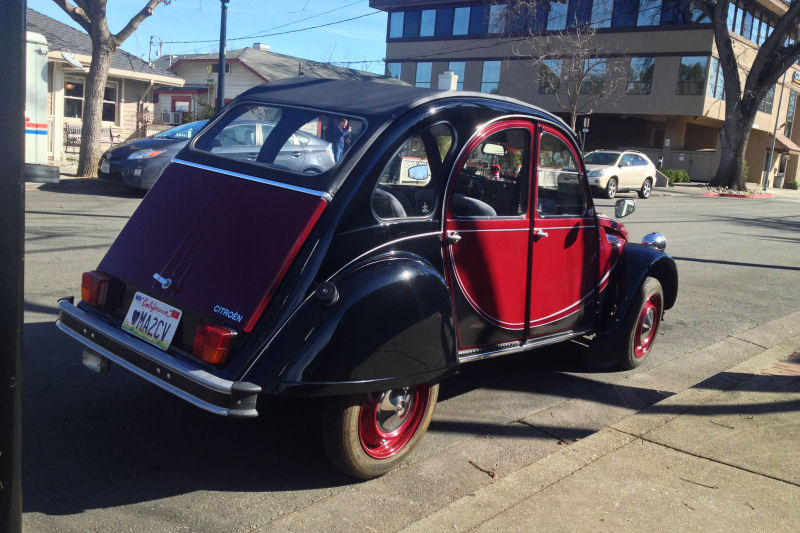 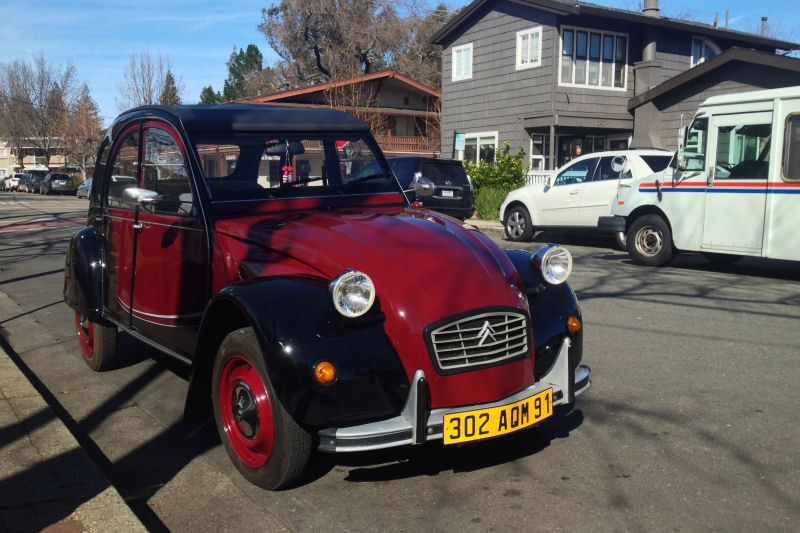 It really pains me that my favorite Citroen history website is gone. I used to use Cats-Citroen.net to help narrow down the model years of 2CVs and DSs, even the one Traction Avant I found. Sadly the creator of the website passed away in 2007 and it seems his family has finally let the web hosting lapse. Other history pages exist but his was the most complete breakdown of month-to-month model updates I've seen. 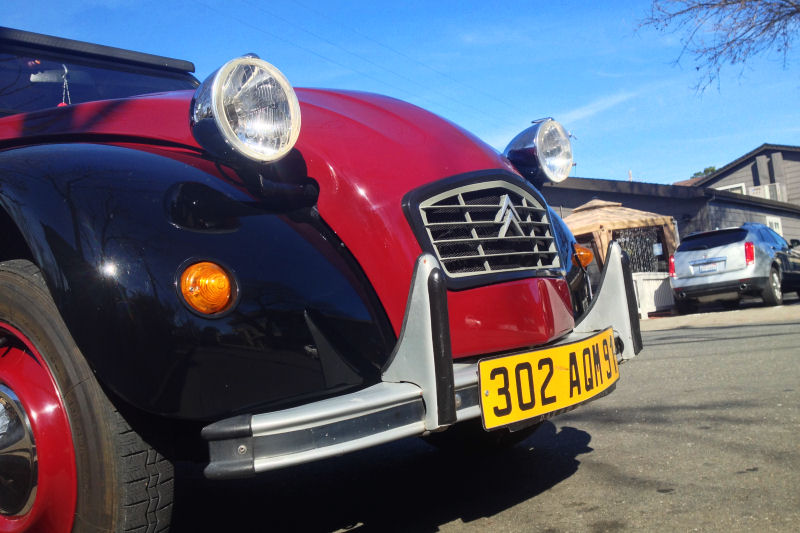 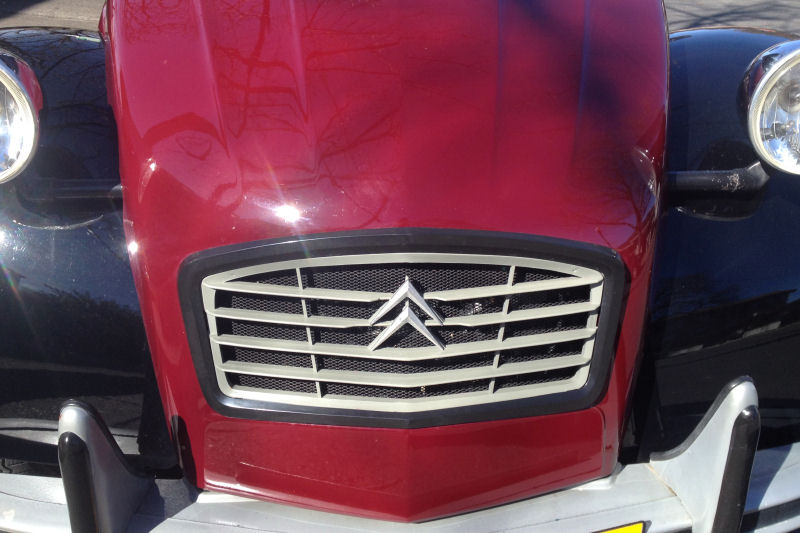 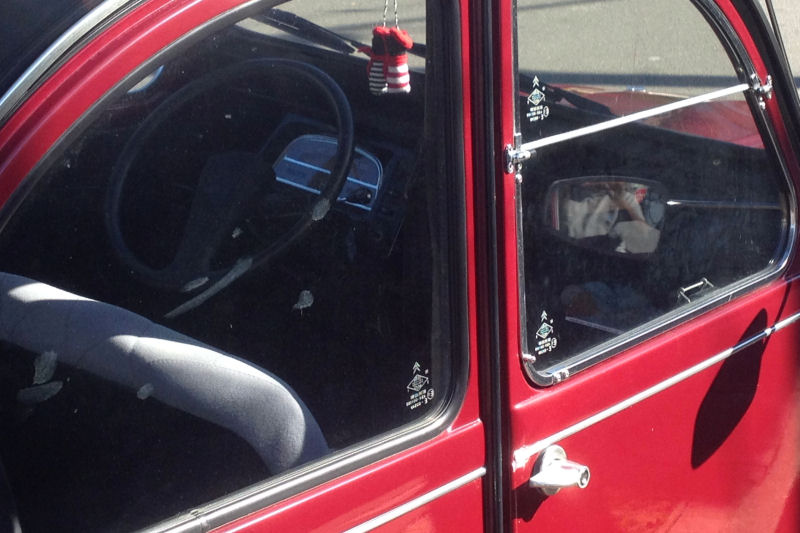 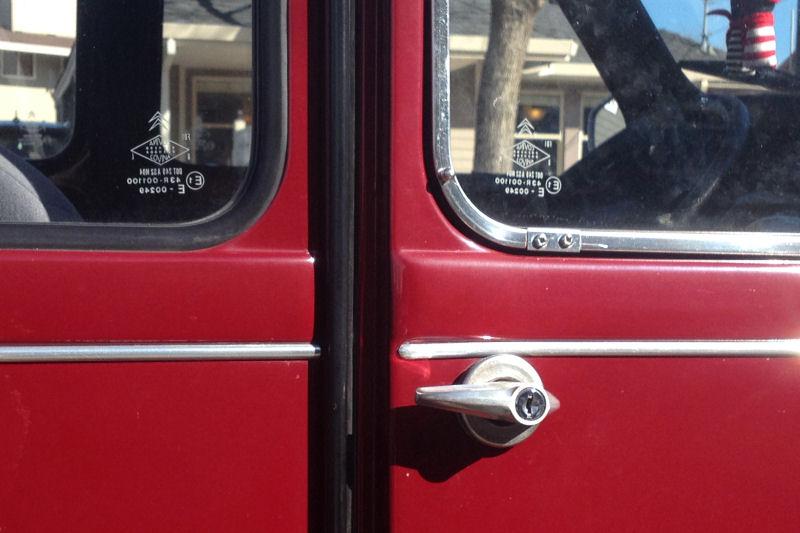 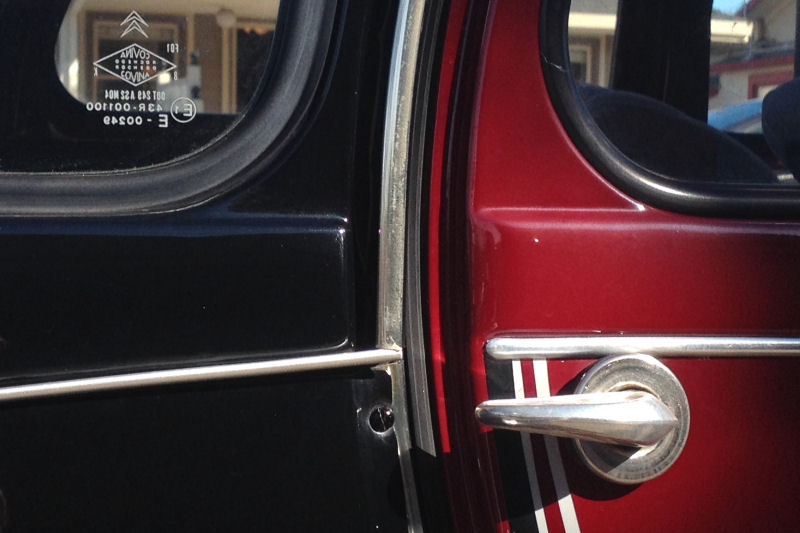 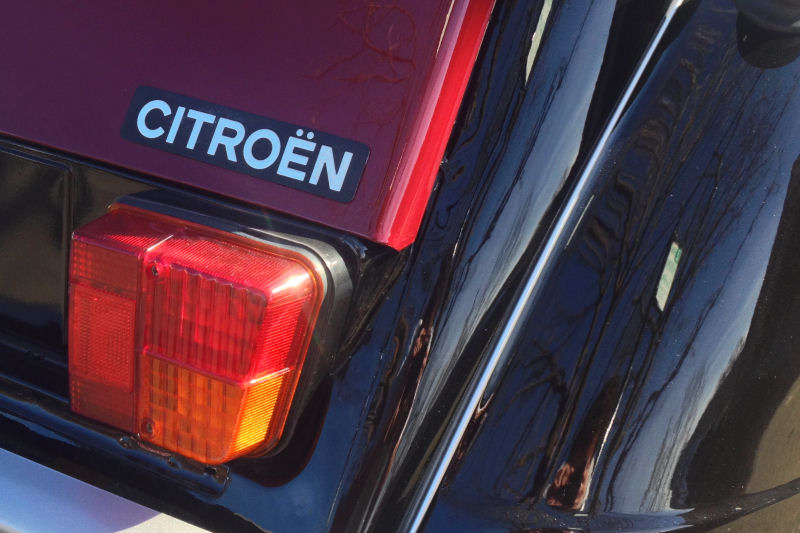 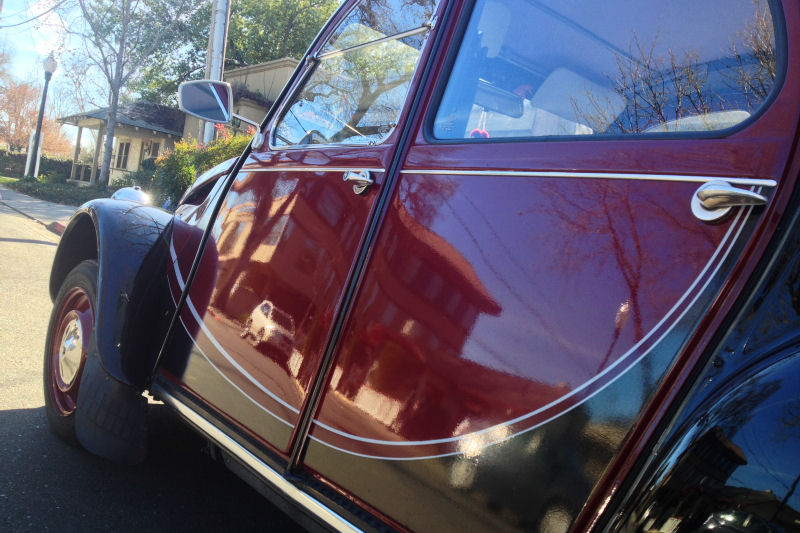 Getting back to my comment on license plates, the front plate is obviously French and could be original if it's genuine. It has a suffix of 91, originally the department code for Alger, an administrative region of northern Algeria. That would have made for a very interesting past life for this car, except for one thing. In 1968, the 91 code was reassigned to Essonne, a southern suburb of Paris. I'm expecting this car was built sometime after 1981, since it wears a special "Charleston" color scheme of maroon and black but does not have Charleston edition badges. My best guess is 1986 or later, based on the black grille surround and windshield border. The front license plate says D.A.E VW Audi Corbeil along its bottom edge, which I take to be a dealership in Corbeil-Essonnes. D.A.E. could refer to Déclaration d'Autorisation d'Enlèvement, which sounds like declaration of authorization for removal or export. Perhaps that dealership offers import/export services and that may be how such a car ended up stateside.
What says the most to me about this car, though, is the rear license plate. Love mah 2CV. If that doesn't reflect pride of ownership, I don't know what does.

If anyone is an expert on these cars and can more accurately identify this one, please feel free to comment below and I'll fix it. Thanks!

Photographed January 2016
Posted by Jay Wollenweber at 12:00 AM