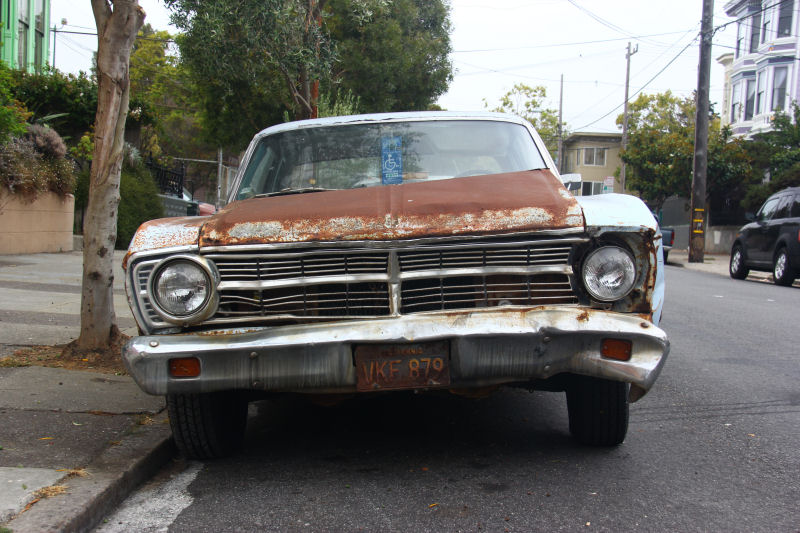 This has to be one of the most visually interesting cars I photographed in 2015. The '67 Ford Falcon never set out to be exciting originally, just a basic economy car that lived in the shadow of the Mustang. Ford produced a car that checked the boxes for a car of the era: Four doors, two doors, station wagon; six or eight cylinders; automatic or manual, done. The body was conservatively styled and the chassis conservatively engineered. The colors it was offered in were generally conservative as well. Nothing about this car really stands out, but for the incredible patina it wears. 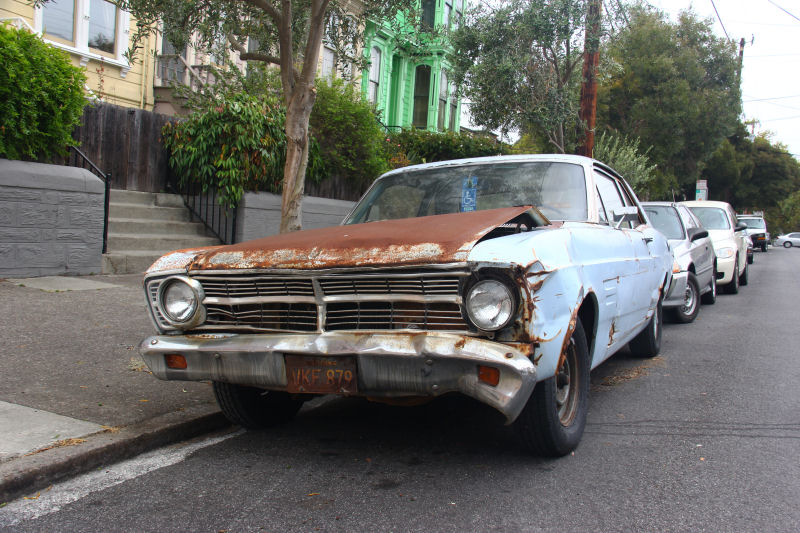 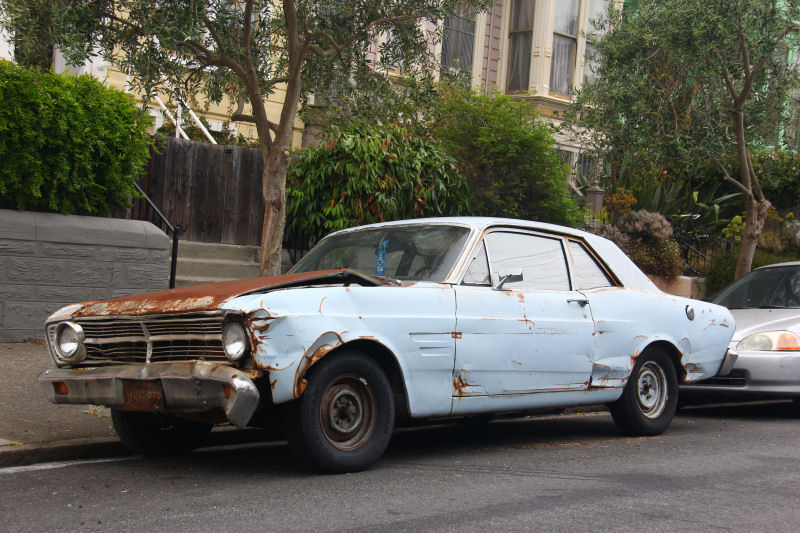 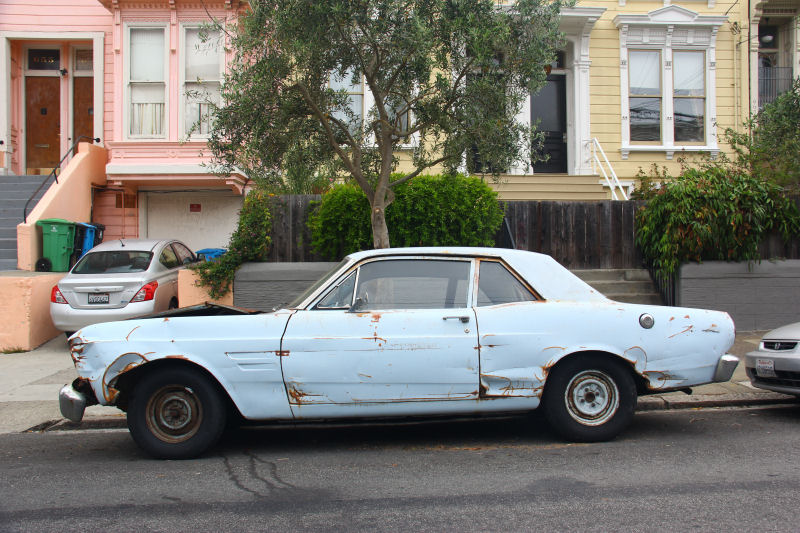 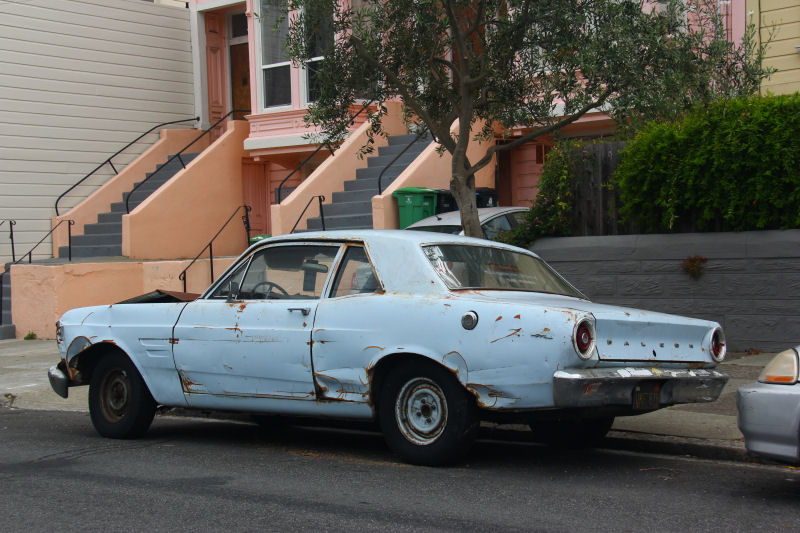 I sometimes like to refer to a car like this as having been around the block and hit everything along the way. It's an old urban runabout, the sort of car that you aren't making payments on, have no collision coverage on, don't care or don't notice if it gets another scratch or ding, and keep driving because it's as reliable as an anvil and almost as tough. 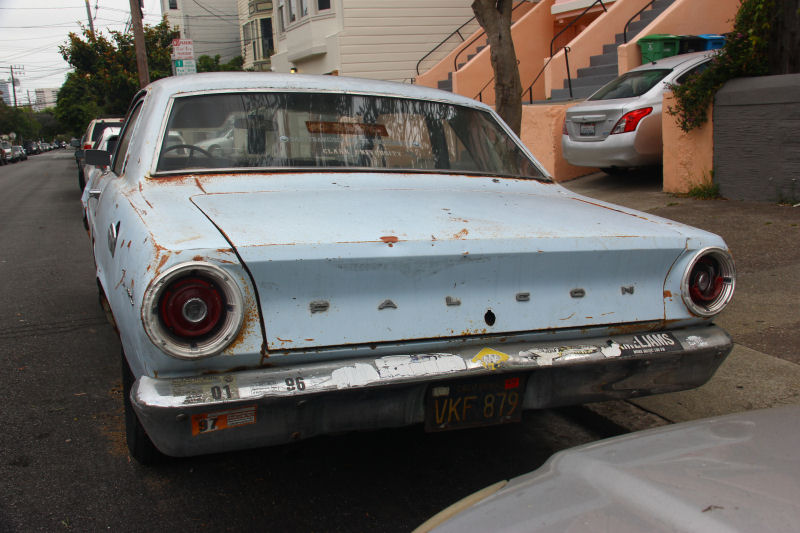 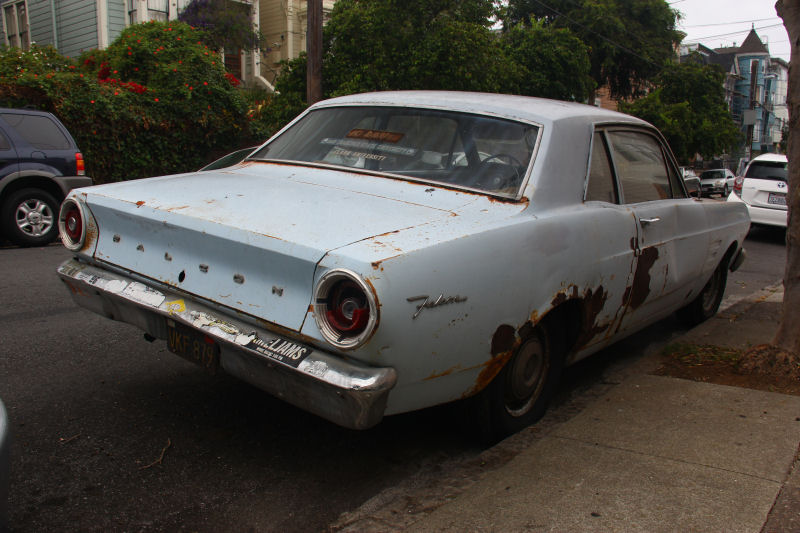 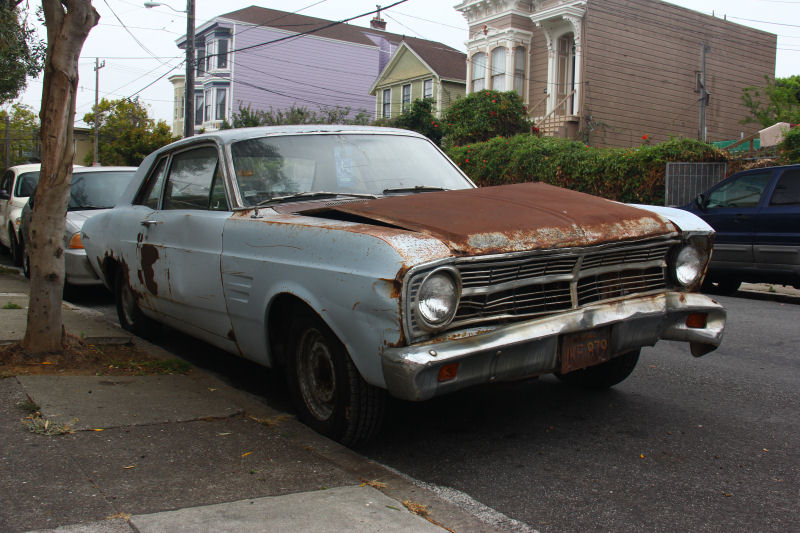 I'm almost certain this Falcon will never see restoration, because why would someone go to the trouble? The value of a garden variety 1967 Falcon two-door sedan isn't high enough to justify straightening, patching or replacing every rusted, crumpled and bent panel. Since it isn't a Mustang, many parts such as the front grille most likely aren't available in reproduction form. NOS (New Old Stock) pieces are still out there but they're becoming scarce. 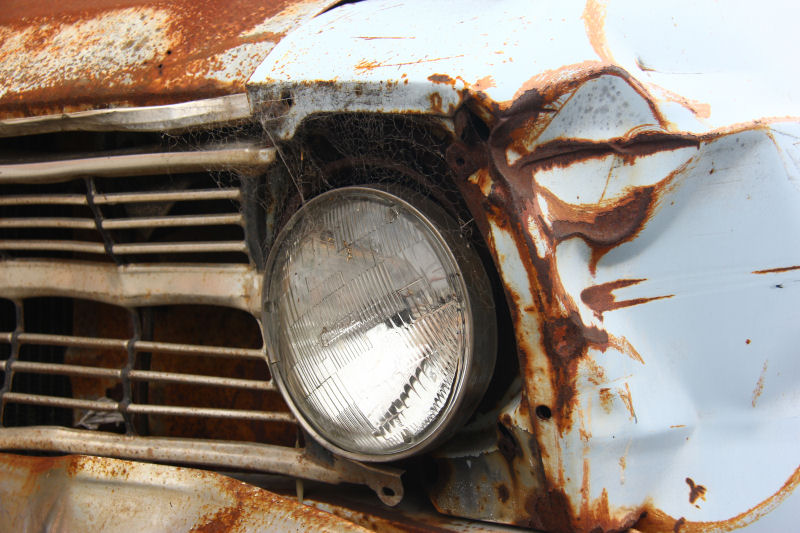 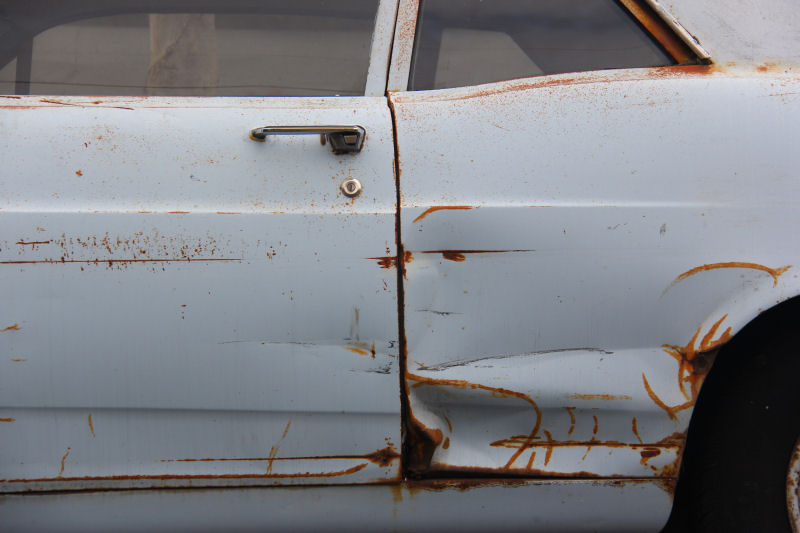 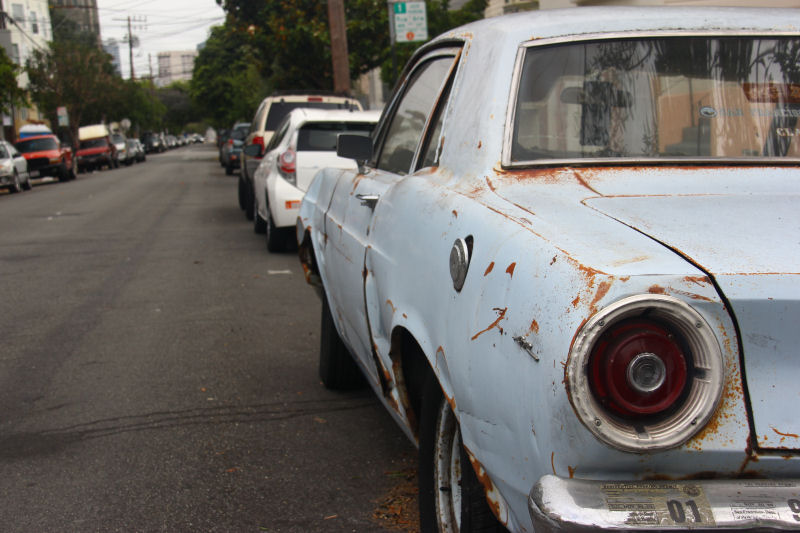 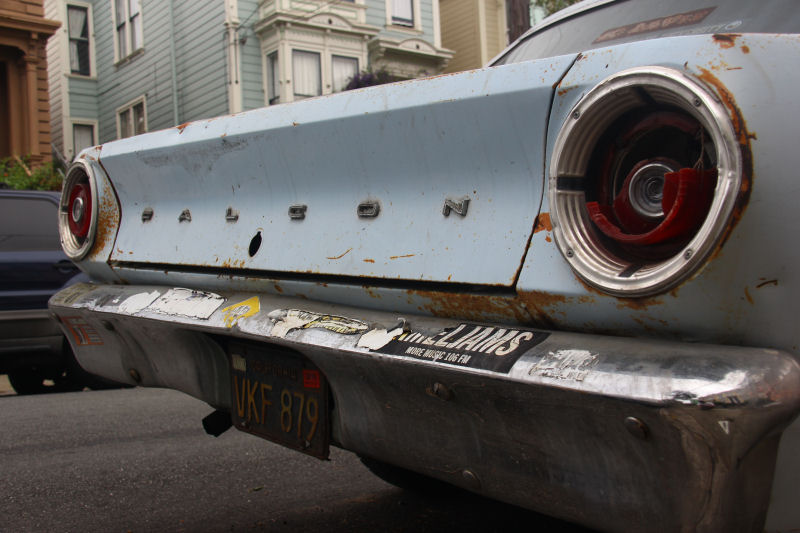 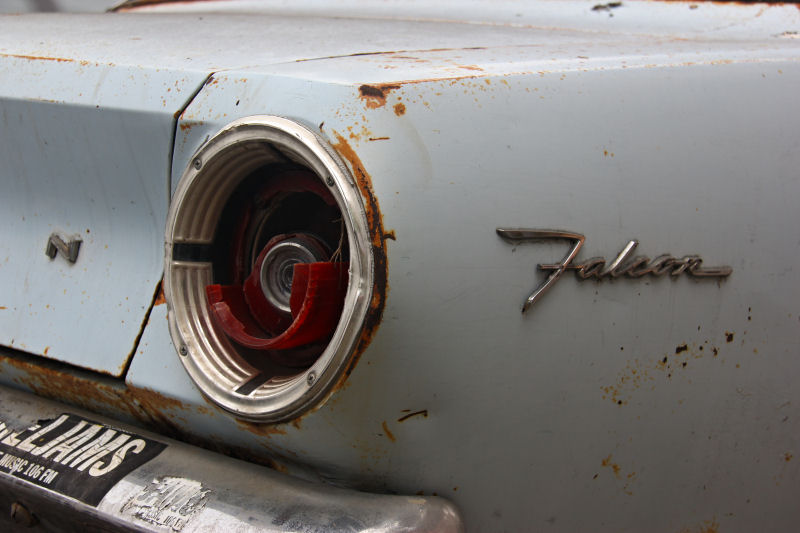 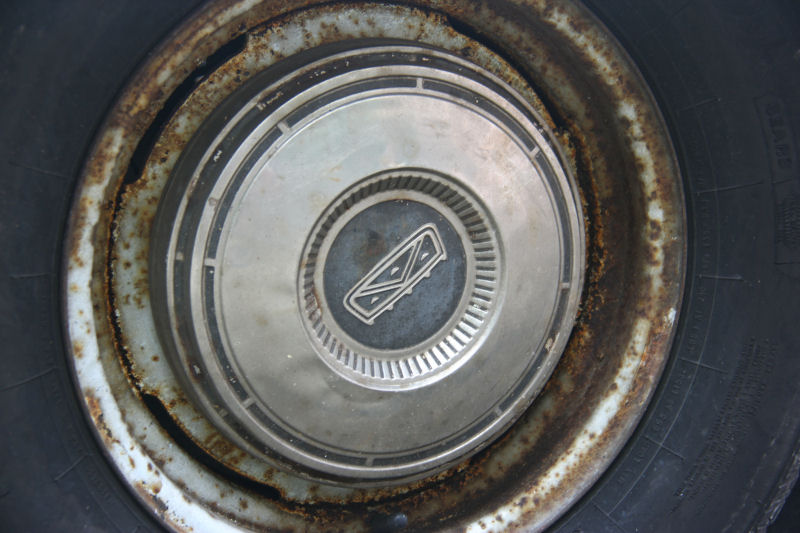 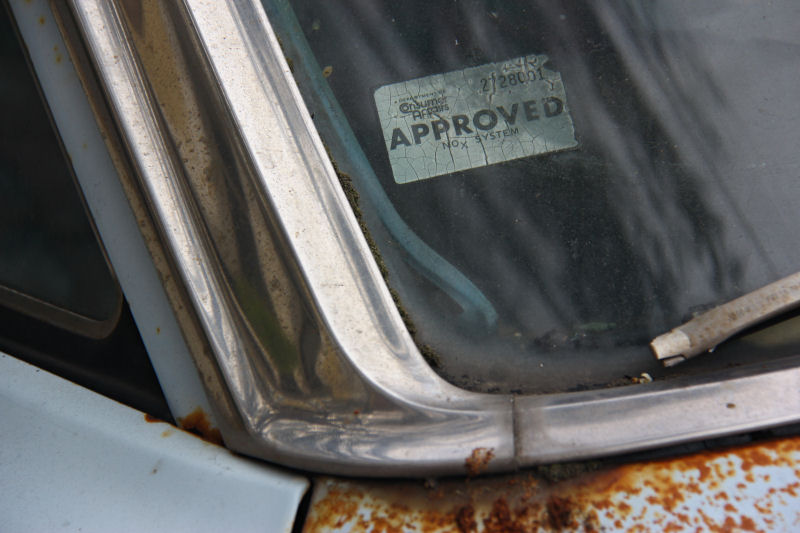 I'm fascinated by the severe weathering this car has undergone during its long journey to the present day. Twenty years of San Francisco residential parking permits, a KMEL Jams 106 FM bumper sticker and various other faded and peeled stickers adorn the rear bumper. The rear glass bears decals from what looks like three different universities. The windshield sticker advertises that a smog pump or some other emissions control system was bolted in to satisfy the California Department of Consumer Affairs in the 1970s. The license plates are original; the paint probably is as well. It might be an extremely faded Frost Turquoise, or maybe Arcadian Blue which was a fleet and commercial color that year. Arcadian was also offered on Thunderbirds, so maybe the original buyer special-ordered that color? It would be an interesting quirk to spring for extra-cost paint on an otherwise bargain-basement car. Damage aside, a Falcon is one of those tough, simple vehicles like a Plymouth Valiant that will just about keep going forever if the mechanicals are serviced. For some people that's all that matters.