I've probably been playing too much Grand Theft Auto IV, but I've also been spoiled for choice when browsing my archives trying to pick a car to feature. So I'll take a leaf from Brucie Kibbutz's book and be genetically different, baby. ALPHA. Or Alfa, even.

This week, let's look at some Alfa Romeos. 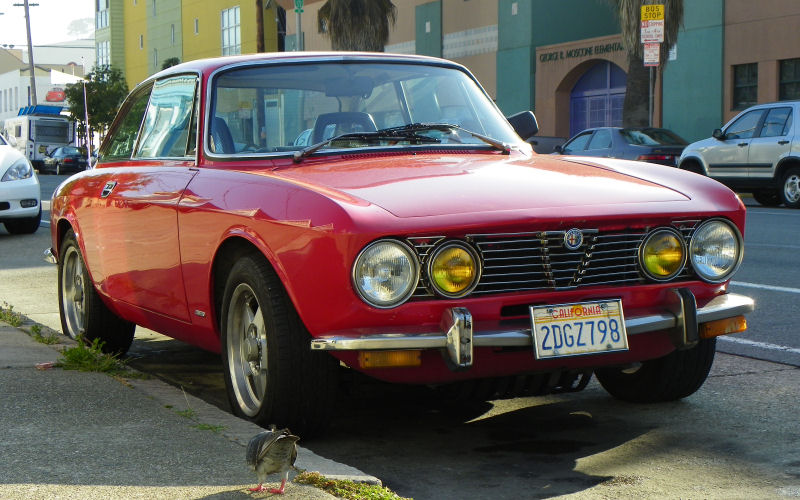 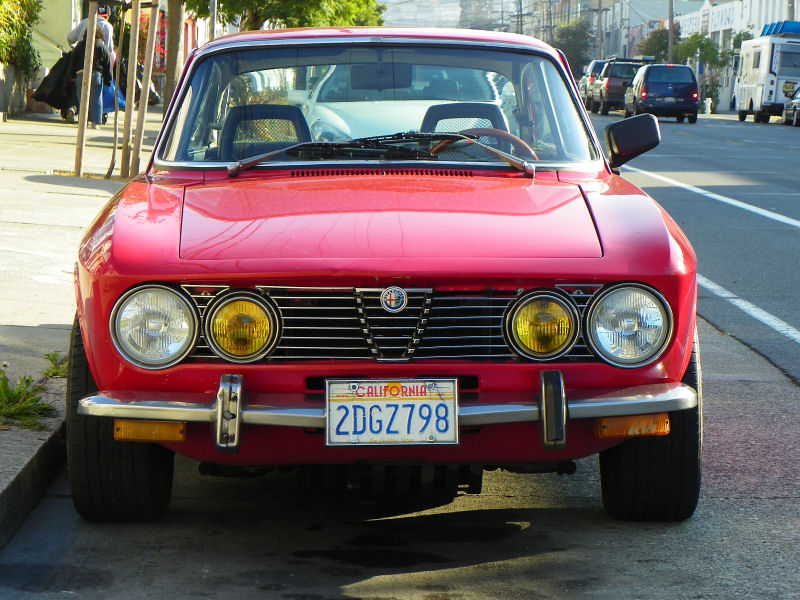 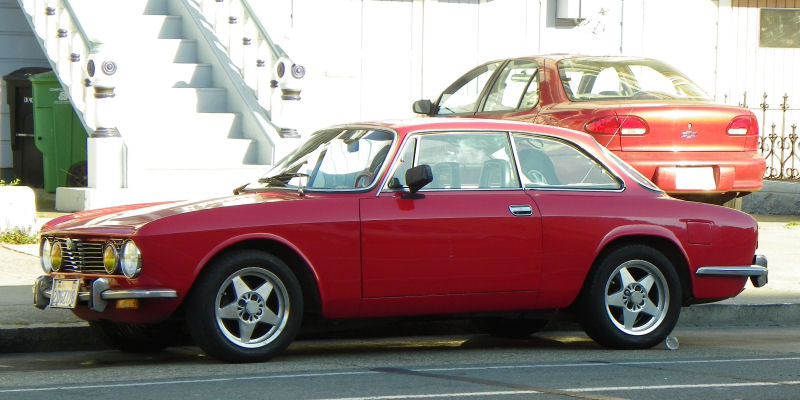 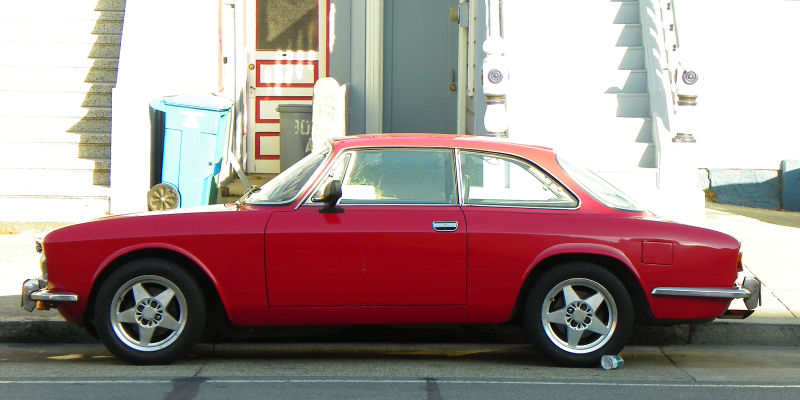 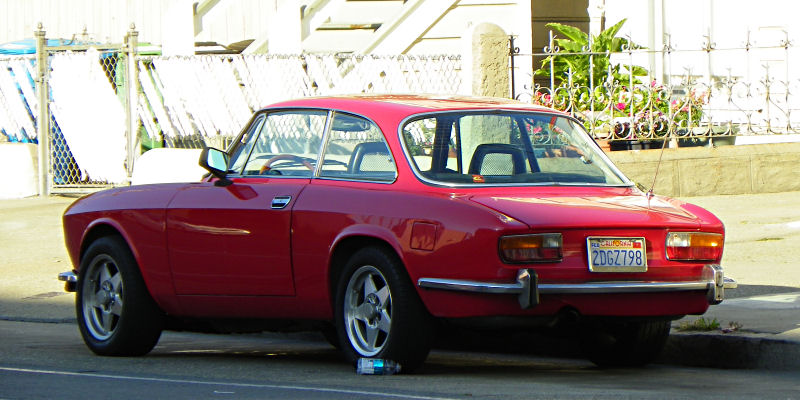 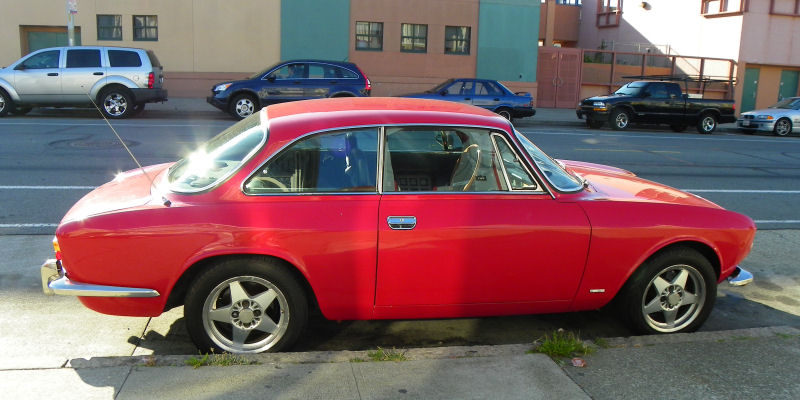 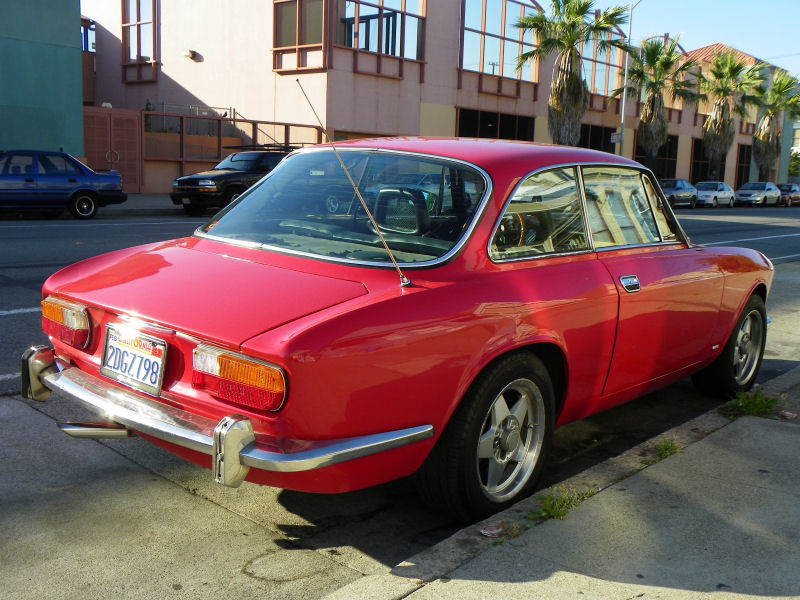 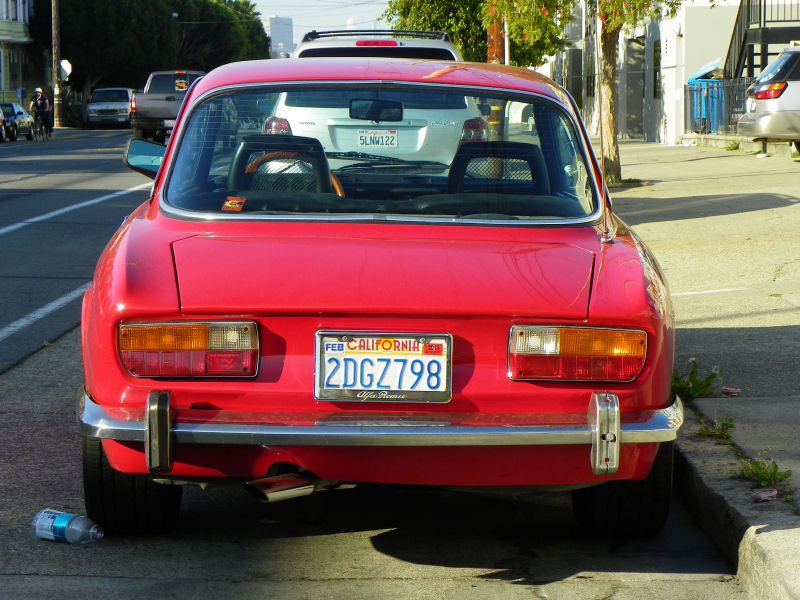 First up is a 1974 GTV coupe. I've seen lots of these in San Francisco, but rarely have the presence of mind to do a full photo shoot. It's the second '74 GTV to be featured here, but it has a distinctly different flavor to it from the sedate-looking dark blue example I posted a year ago. This car has more of a boy-racer feel, with its bright red paint, custom wheels and offset chrome tailpipe. Perhaps the owner likes spirited driving in addition to commuting in an oddball classic coupe. The body seems well-kept, though the rubber bumper over-riders seem to be missing on the right side, curiously both front and rear. The black plastic driver-side mirror also seems odd, given that the blue car had a chrome or stainless mirror. Maybe the black '80s-style mirror was a low-cost alternative to sourcing an authentic piece. The yellow driving lights are a curious but inoffensive choice, suggesting a European-market vehicle without violating American headlamp laws. On this car, they may even have been stock, given that unlike the blue car, this red one lacks federally mandated side markers, probably making it an original Euro car that was imported in the mid-1980s if the California "Sunrise" style license plates are to be believed.
I tend to notice a lot while examining cars, so I notice that this one has a couple of imperfections in the bodywork. There's a small dent on the leading edge of the front end and a small crease at the top of the right-rear wheel arch. The latter is probably a very expensive fix so I can't fault the owner for leaving it there. I'd swap out the discolored left front indicator lens and replace the missing rubber bumper pieces, but otherwise this is a very solid little driver and in surprisingly good shape for a nearly 40-year-old Italian car in the city.
Posted by Jay Wollenweber at 12:55 AM