I'm hit or miss on the majority of vehicles - sometimes I only like one model year of a particular car because it has just the right combination of styling, features, dash design, whatever. For example, the 2004 Pontiac Vibe. I liked the '04 model because it had white gauge numerals instead of red. I already liked the new-for-'03 body style, but hated the gauges. In 2005 it was facelifted and I never liked it again.
You may be saying that has nothing to do with the 1959 Ford Fairlane 500 pictured below, but it's more relevant than you might think. I've been called a Ford fanboy, and in some cases it's true. However I don't fawn over every Blue Oval creation, and have been particularly ambivalent about the 1959 Fords. 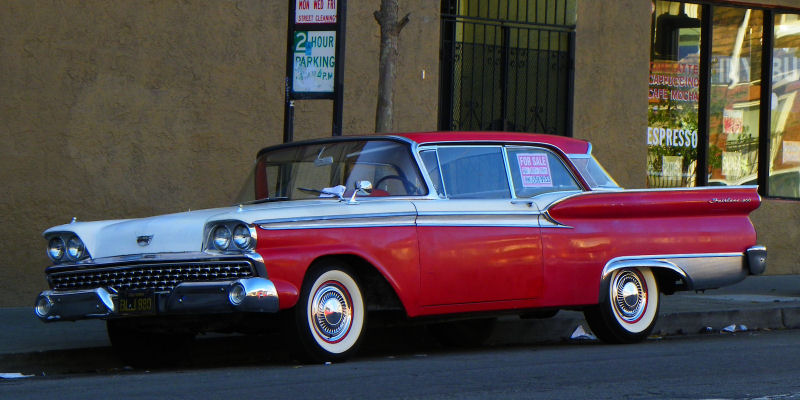 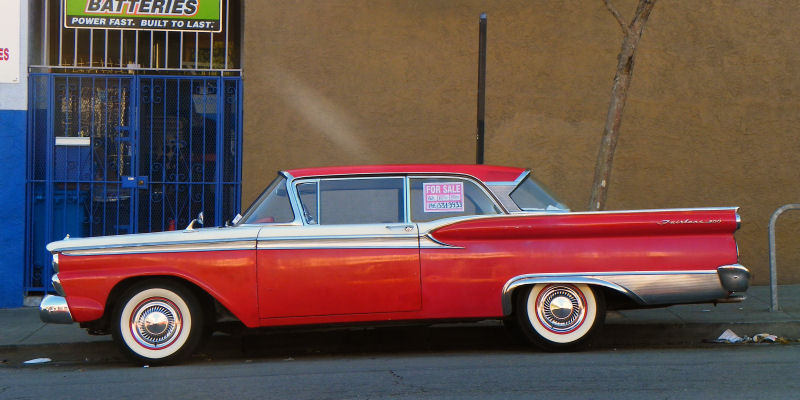 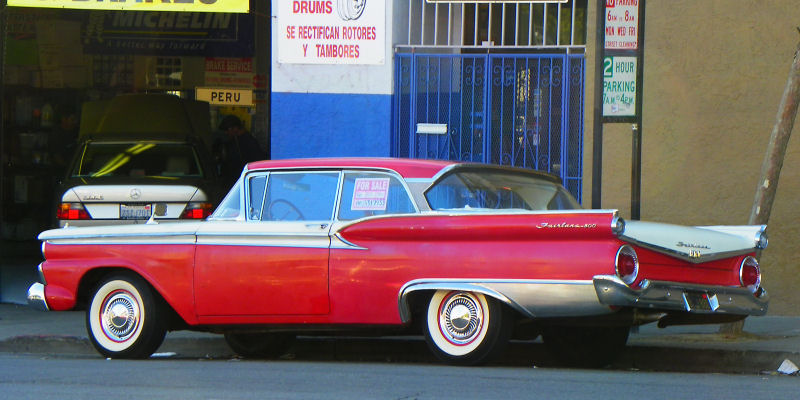 I'll be honest, I love the 1956 Fords, I like the '57s, I don't like the '58s. It seems like 1958 was a disaster year for much of the auto industry in addition to being a lousy year for the US economy. Ford, Lincoln and Mercury were off their game with some genuinely strange designs. Ironically the brand which generated the most negative publicity, Edsel, is the only 1958 Ford product I like. Come 1959, the market had reached the peak of tail fins, chrome and general extravagance. Park this car next to a '59 Chevy Impala with its bat-winged fins and horizontal teardrop taillights, a '59 Pontiac Bonneville with two sets of V-shaped mini fins, or the obvious winner - the '59 Cadillac. Everyone know what that looks like. Compared with the competition, the Ford looks rather sedate with its anodized aluminum side trim and chrome spear that connects to another narrow strip running over the top of the rear fin to the high-mounted reverse lights. A full-width grille reminiscent of stablemate Mercury features a series of stylized four-pointed stars that set it apart from a generic eggcrate or mesh pattern. Long and wide, with massive overhangs front and rear, it is a truly American car in the grain of the late 1950s, a car made for straight-line highway cruising, and not made for parallel parking (many towns had angled parking on streets, so parallel parking wasn't much of a concern - my great-grandmother failed a driving test at age 93 because she had never had to parallel park before in Ohio). A 332 ci FE big block or 352 Thunderbird V8 likely motivates this mid-range Fairlane 500 Club Victoria, although the single exhaust pipe may suggest a 223 ci six-cylinder. I'm not an expert on these cars and Google Image Search produces a lot of vehicles with custom dual exhaust systems. It wouldn't be the first time a V8 car had a single exhaust, though. 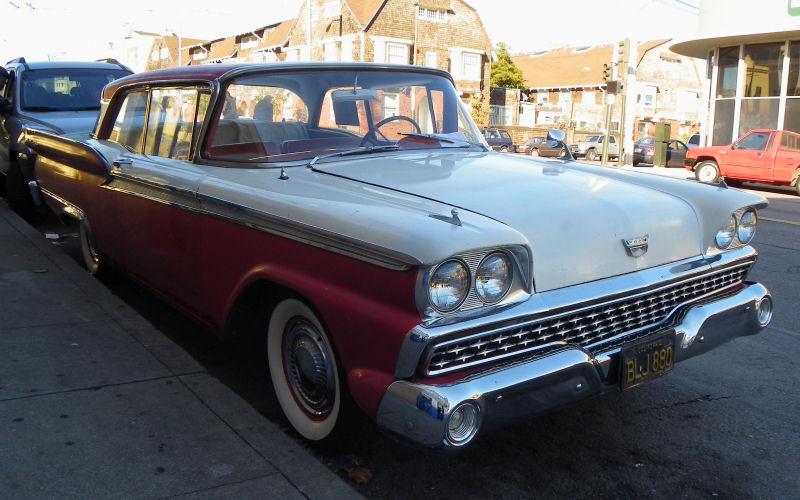 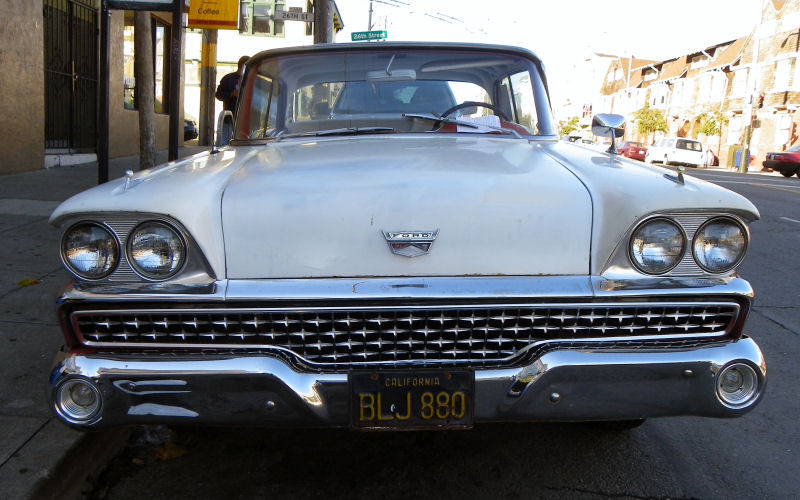 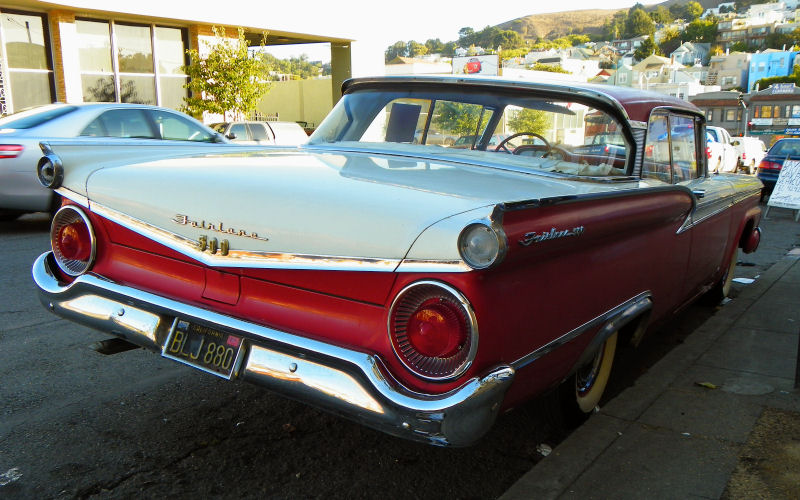 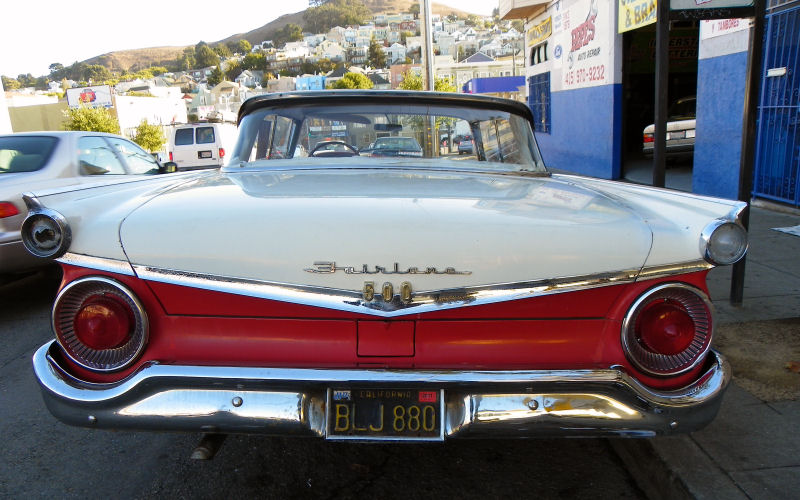 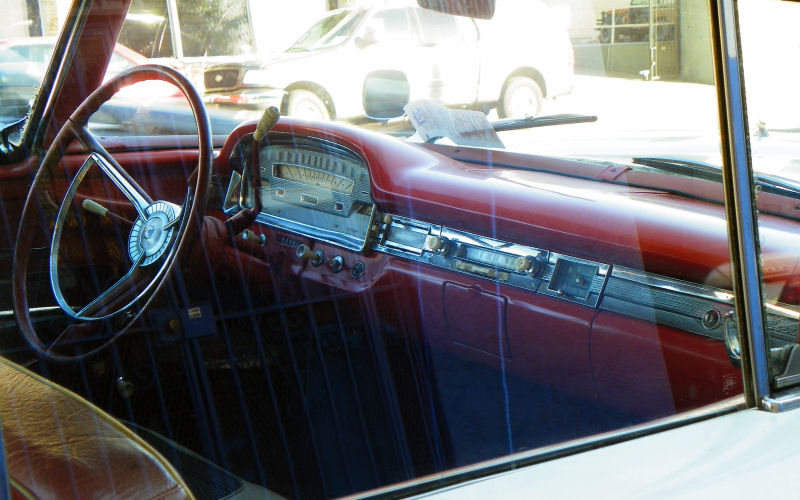 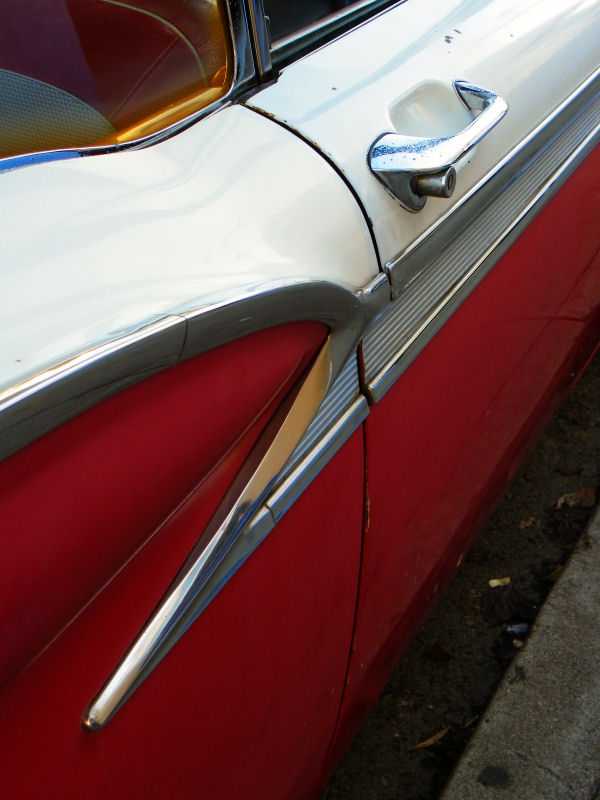 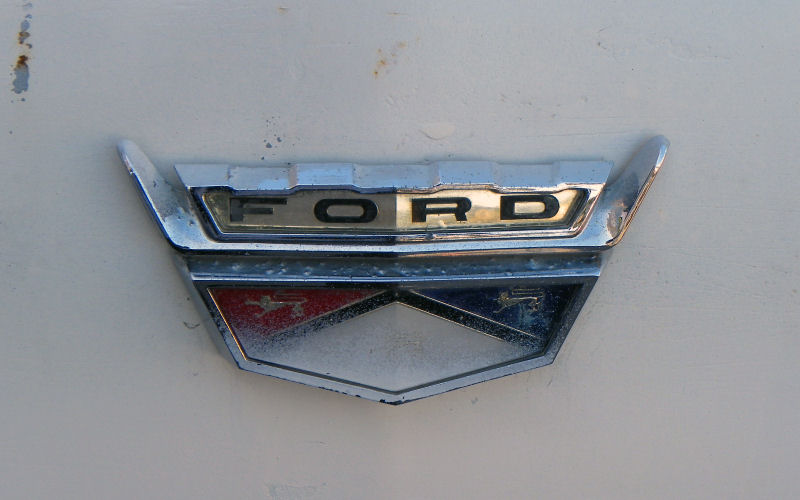 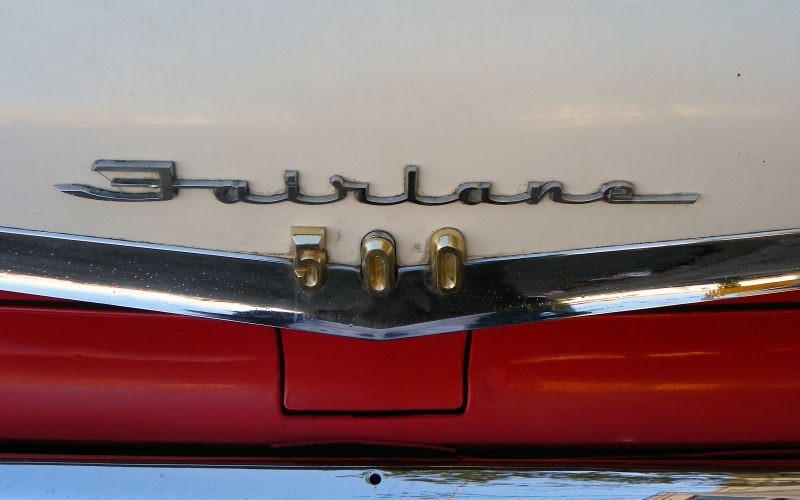 Condition is good for an unrestored original car, with nice straight body panels. It looks great from across the four-lane Van Ness Avenue, but up close its age is evident with chipped paint and pitted chrome. The owner, a kindly man who stepped out of an auto shop to talk to me about the car, said he'd owned it for roughly 20 years and it was time to sell. I don't recall what the reason was, but lack of space seems to be as good a reason as any, especially when the car starts collecting parking tickets from San Francisco's unrelenting Department of Parking and Traffic. I hope it went to a good home. Come to think of it, the more I look at this car, the more details of it I like. I wouldn't own one myself, but it's nothing to be ashamed of.
Posted by Jay Wollenweber at 4:27 PM