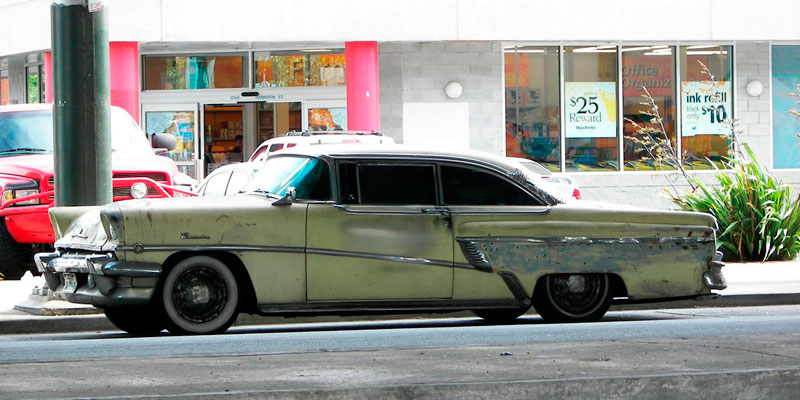 Many old cars have an interesting story to them. The story behind this 1956 Mercury Montclair Hardtop Sport Coupe is a sad one. It sits, day in and day out, on a street under the Central Freeway flyover in front of a Best Buy store in San Francisco's SoMa (South of Market) district. The plates are recent and registration is current but I have always seen it in the same spot over the last two years. I suspect this old Merc isn't used so much for transportation as it is for shelter. 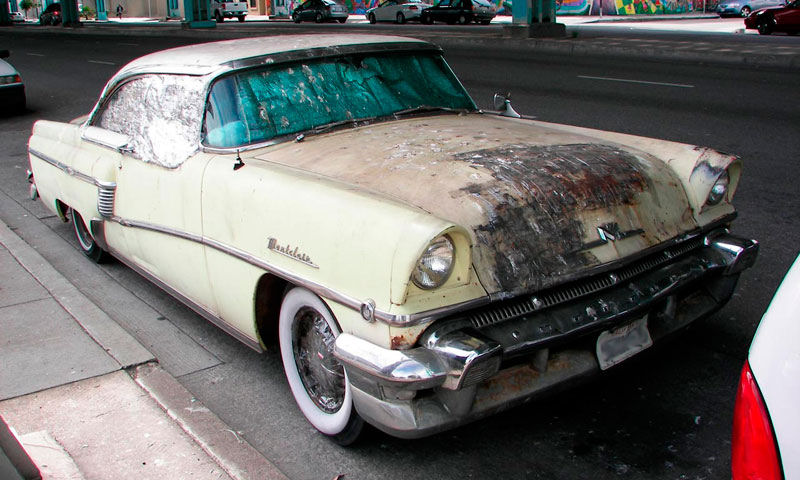 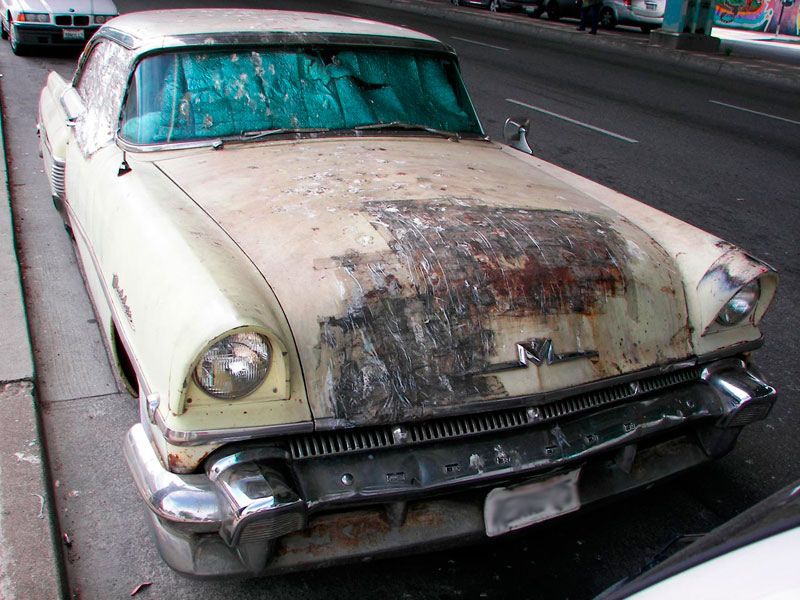 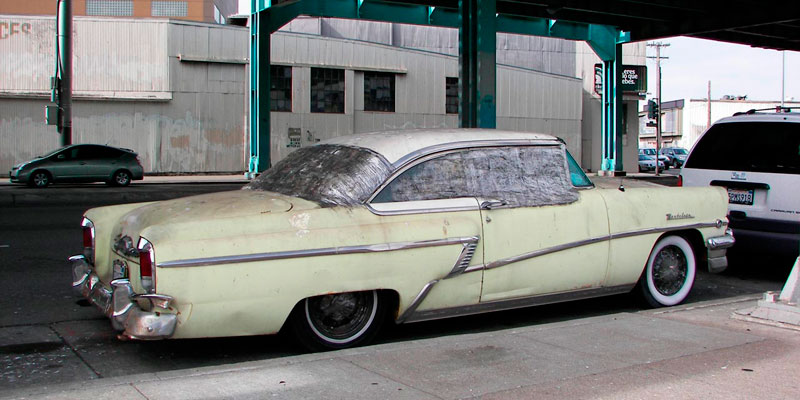 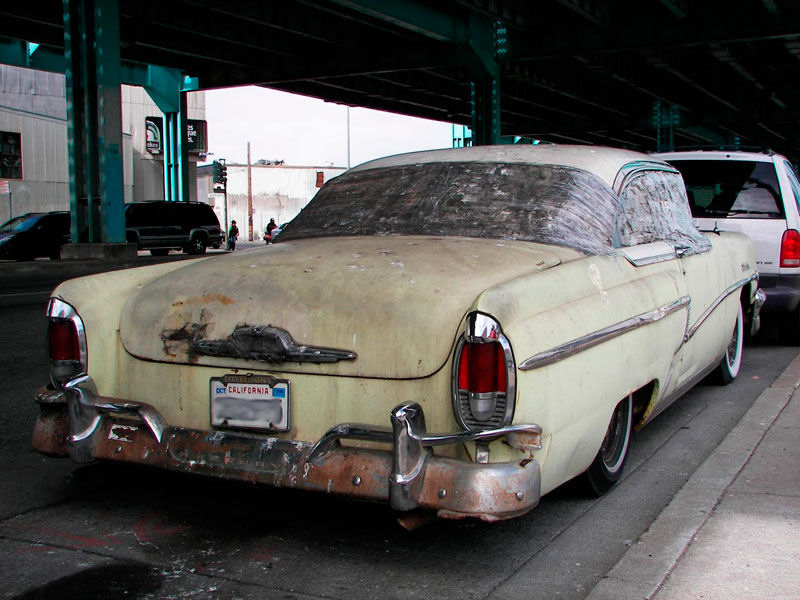 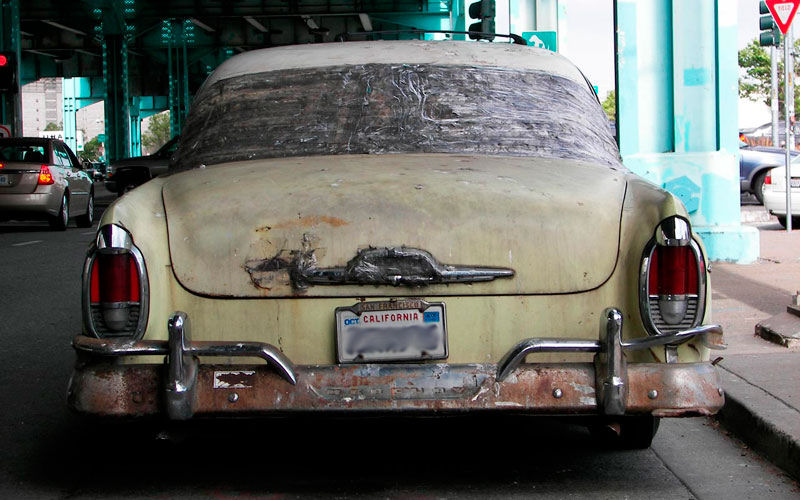 In an apparent effort to save its paint and steel from total ruin, the owner has mysteriously covered large swaths of the car, including its hubcaps, in clear packing tape. But the tape doesn't stop there. It continues up over the rear and passenger-side glass, as if intended to deter the prying eyes of passersby, The driver-side windows are not covered and the windshield just has a standard folding sunshade to cover it. The tape produced such an opaque wall that I had no idea the owner was sitting in it at the time I photographed it. This blog is not intended to make light of the sad and very real problem of homelessness, only to admire the cars I find on the streets of California. For its owner's privacy and to save them a bit of dignity, I have obscured the plate number and photoshopped them out of the driver-side picture. 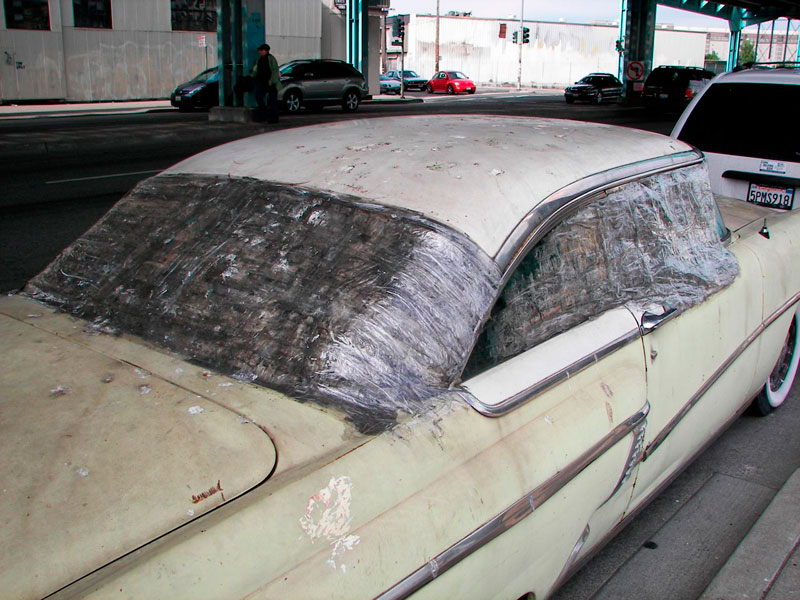 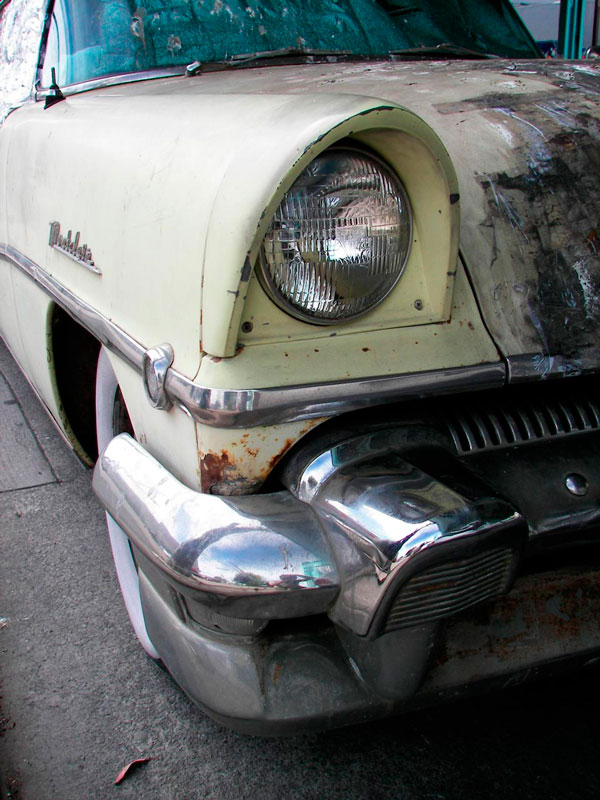 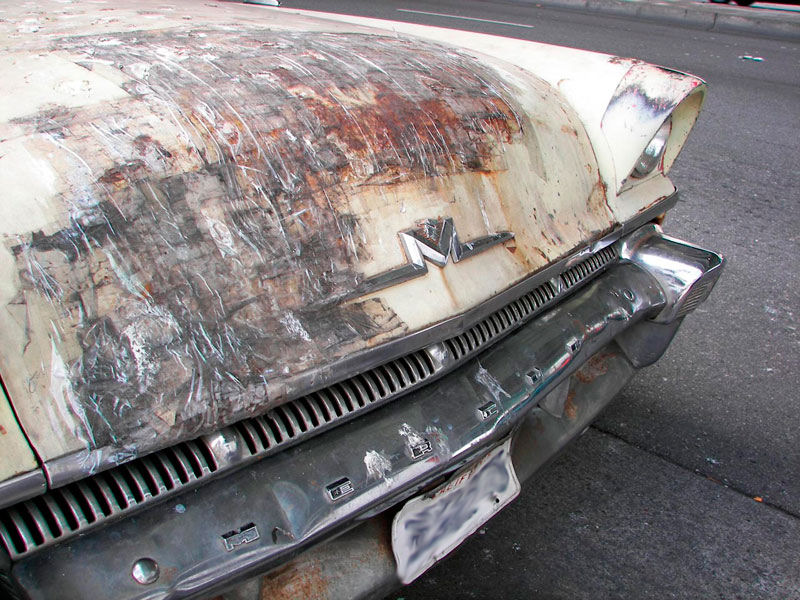 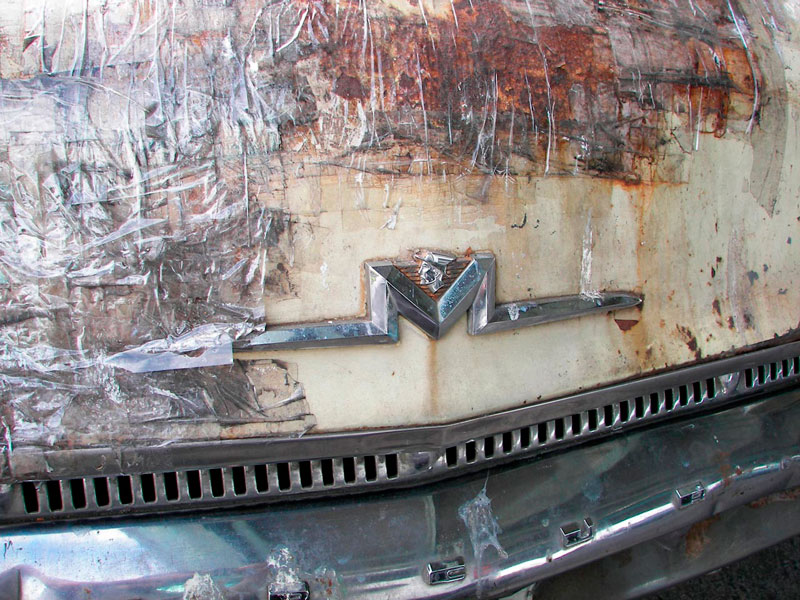 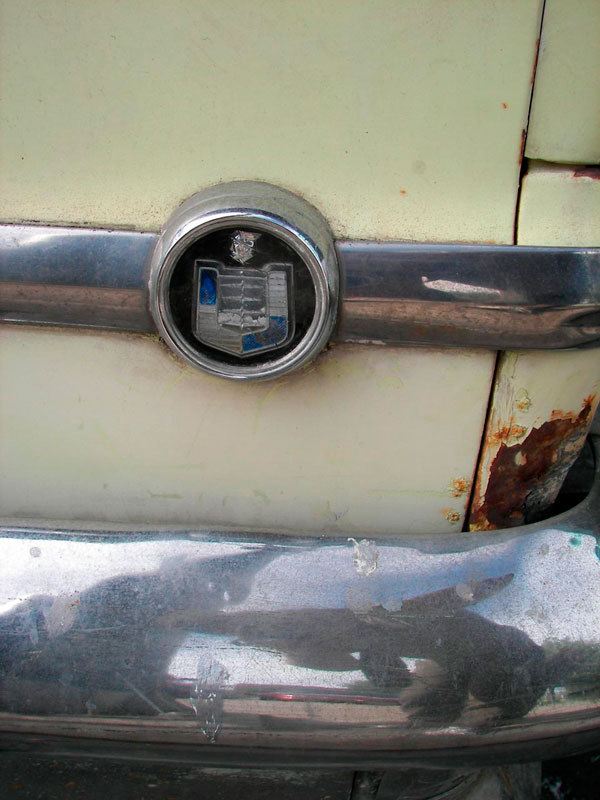 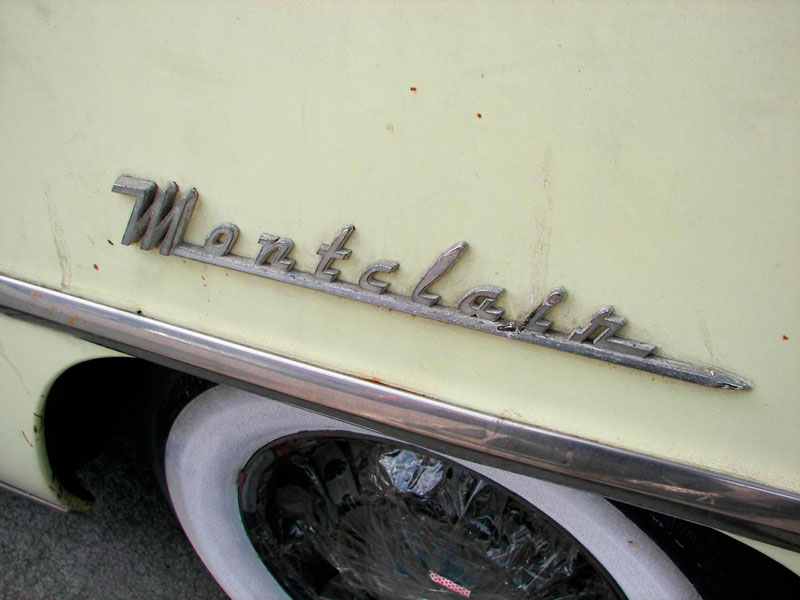 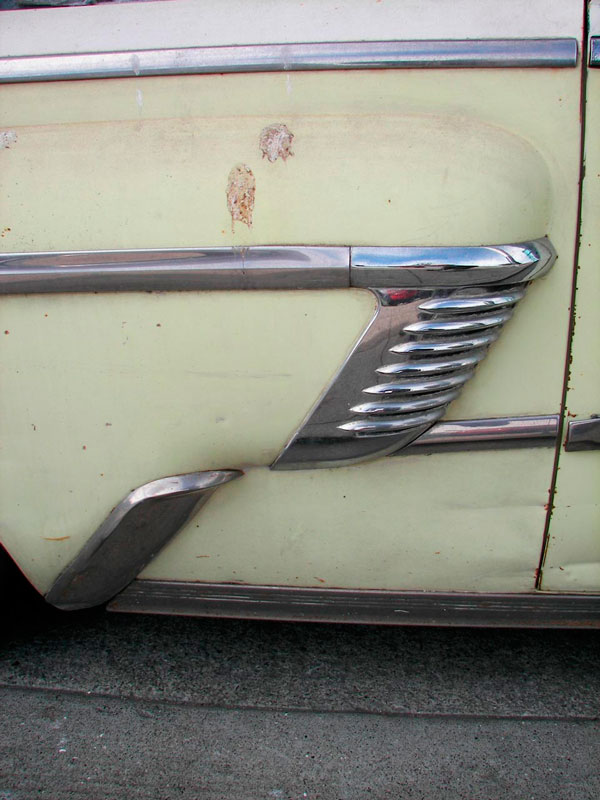 The 1956 Mercury Montclair represented the final year of roly-poly, solidly mid-1950s designs from Mercury. It was a subtle refresh of the 1955 model (itself a reskin of the 1952-54 model) and featured minor exterior trim changes and a restyled grille. Almost all of Detroit would subscribe to a "longer, lower, wider" design aesthetic for 1957, with ever more outlandishly chromed and finned styling. Mercury became arguably one of the uglier brands as the '50s wore on, with barges like the massive 1957 Monterey Turnpike Cruiser taking over from roles once held by the Mercury Sun Valley or Ford Fairlane Crown Victoria and Sunliner, By 1958, Mercury was a big, angry-looking, blocky car that made the somewhat dated '56 models look relatively neat and trim.
Montclair was a new model for 1955, named after upscale Montclair, New Jersey. It was Mercury's top model in 1956, with more features, more trim and unique color combinations not available in the lower models. Montclairs received a 312 cubic inch V8 good for at least 225 horsepower. A three-speed Merc-O-Matic automatic transmission was an available option. The Hardtop Sport Coupe was the most common '56 Montclair body style, with 50,562 produced. Few have been preserved, however, so these are difficult cars to find today.
The detailing on the '56 Montclair is interesting. Fifties cars frequently wore crazy chrome ornamentation to set them apart and this one is no exception. A long lightning bolt runs from the grille to the taillights, bisecting the car in a way that actually doesn't look half bad and would lend itself well to one of the two- or even three-tone paint jobs popular at the time. This one appears to have been two-tone from the factory, wearing a pale yellow body color with a white roof and another white accent in its own special chrome-rimmed area atop the doors. There is no mistaking this car for anything but a Mercury, with a large stylized chrome "M" on the hood with a small "Mercury Man" inset at the center. The Mercury Man also appears in the encircled crest emblems on the front fenders.
This Montclair has had a rough life, wearing its red badge of courage in the form of countless dents, creases, scratches and a mightily screwed-up left quarter panel that desperately needs a proper repair. Despite the damage, its chrome still tries to shine through the surface rust and its whitewall tires fight off the city's dirt and grime on a daily basis. If cars could talk, I can only imagine what stories this one would tell about its life - and the man who may well call it home.
Posted by Jay Wollenweber at 3:13 AM