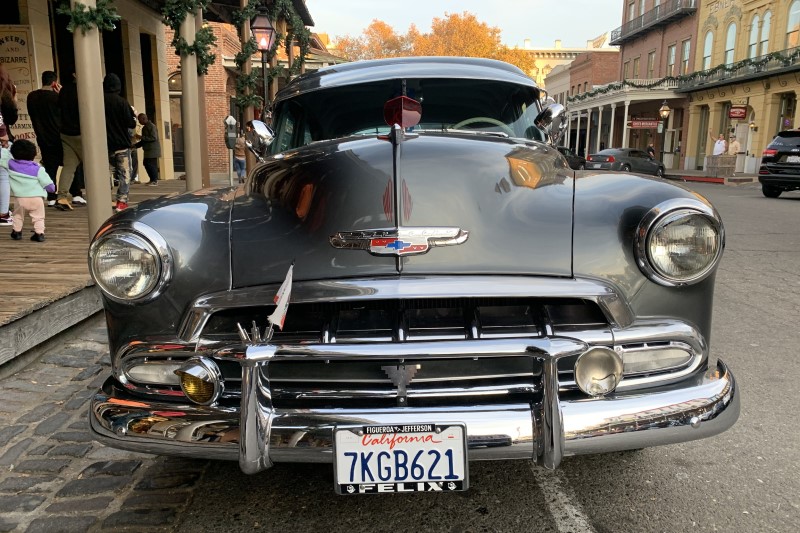 I usually like to do something special for my Christmas feature. I visited Old Sacramento with a friend last December when the historic area was all decorated for the holidays. We encountered this lovely gray 1952 Chevy sedan parked in front of a shop. I liked the building's festive decorations so it seemed appropriate for today. Enjoy. 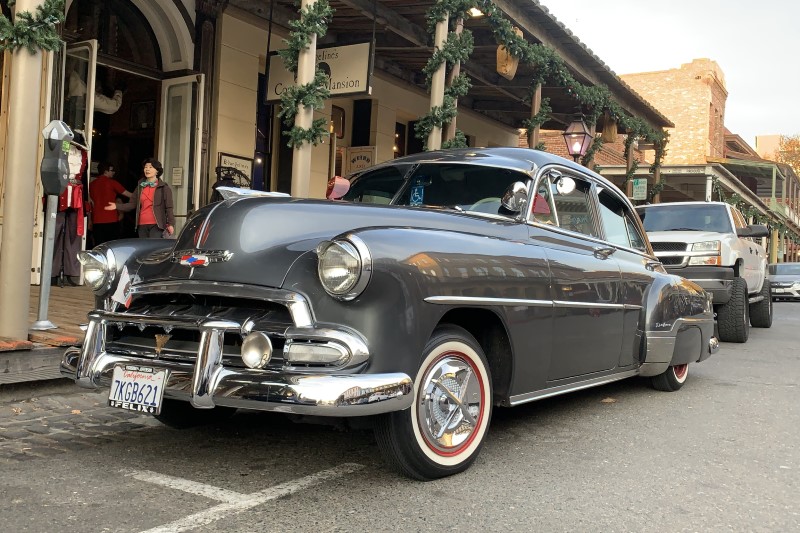 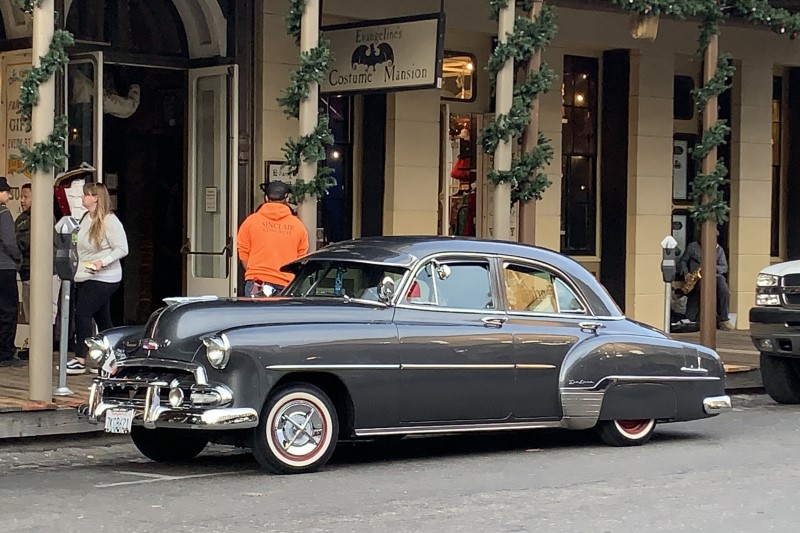 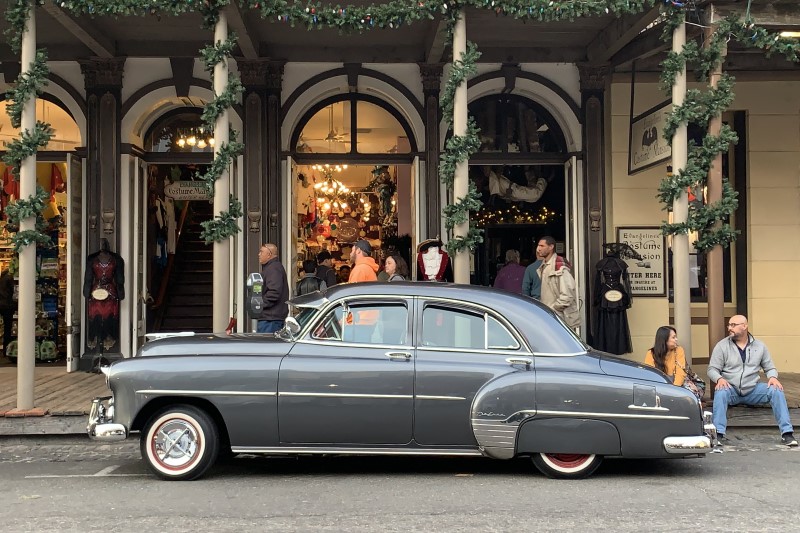 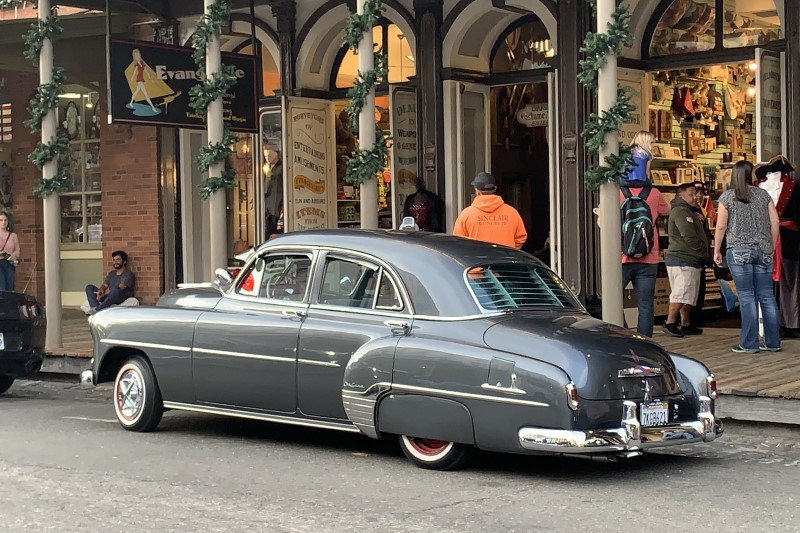 The 1949-1954 Chevrolet has long been, and remains, a popular choice for cruiser and lowrider builds. It was the style option at a time when Ford was marketing power and Dodge and Plymouth were selling economy. The Chevys were actually quite voluptuous in their lines, with bulging pontoon rear fenders and a gracefully sloping beltline. The series was even marketed as the "Styleline". All of this called attention away from the Blue Flame six under the hood and lack of a V8 option to compete with Ford's aging but still relevant flathead. General Motors had steadily improved the design of the Stovebolt by 1952 and was closing the horsepower gap with Ford's V8. The Chevy DeLuxe was available with the old 216 cubic inch engine and three-speed manual transmission, or an updated 235 borrowed from the truck line that was coupled to the two-speed Powerglide automatic. The 235 engine produced up to 105 horsepower, five behind the Ford flathead V8. 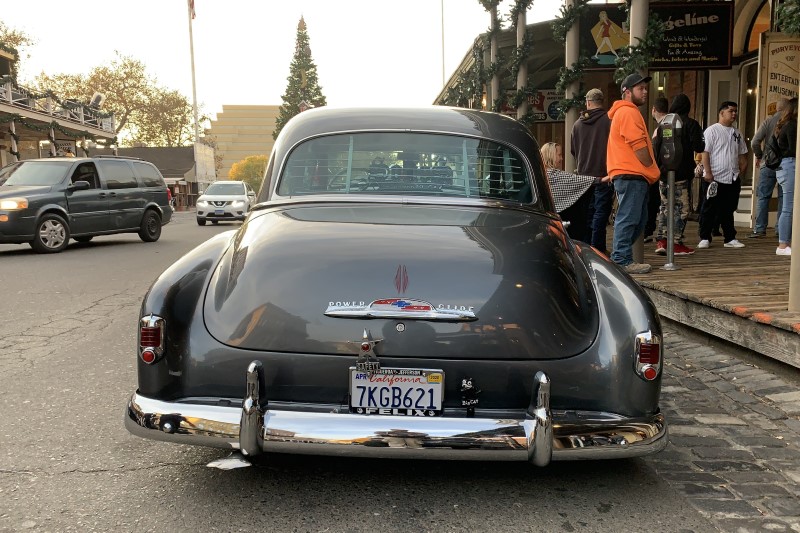 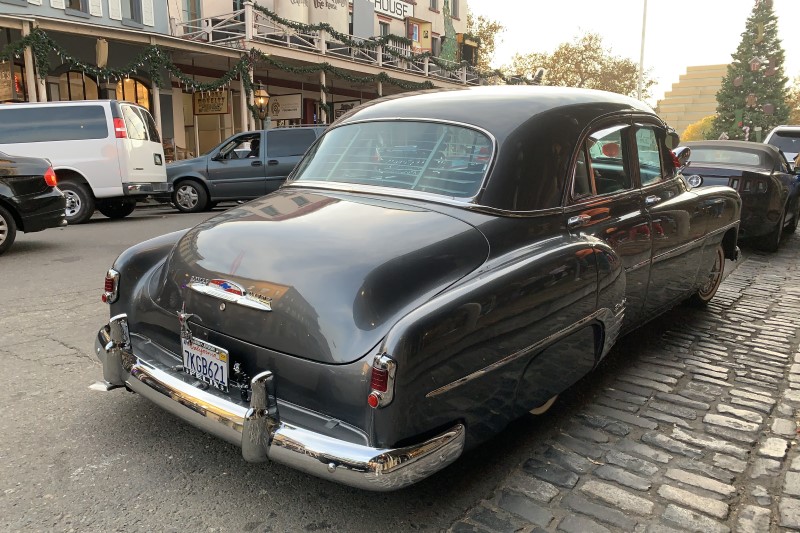 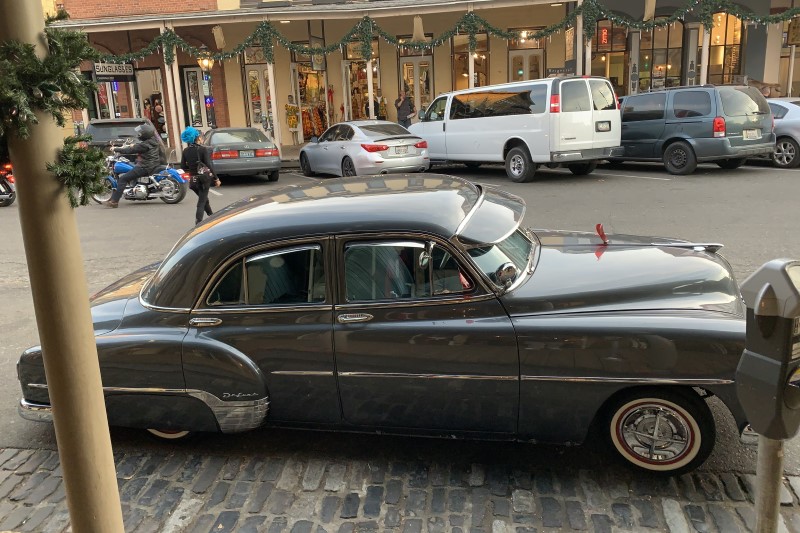 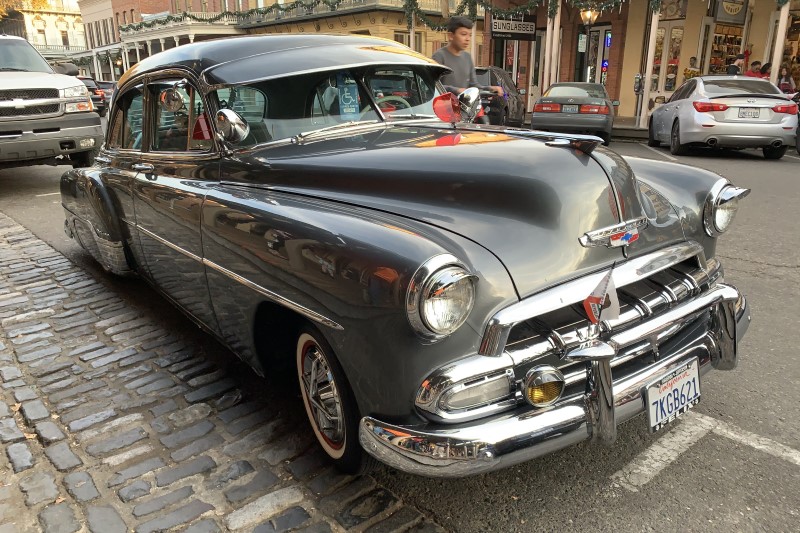 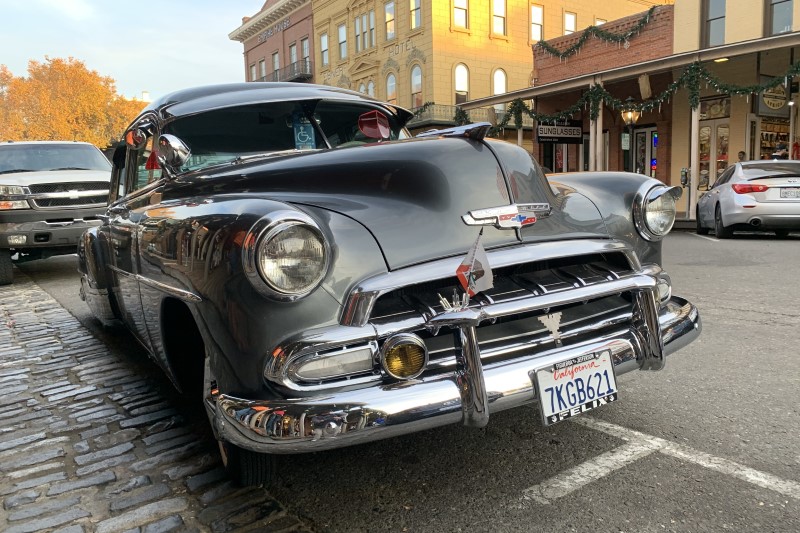 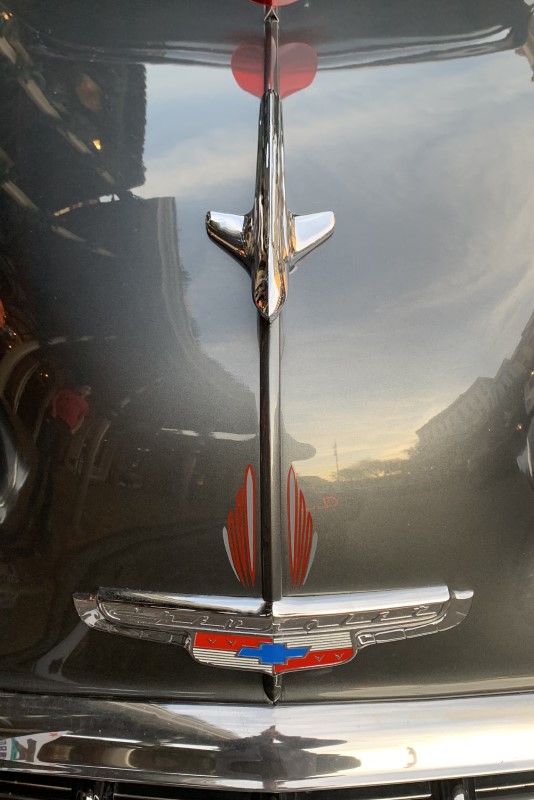 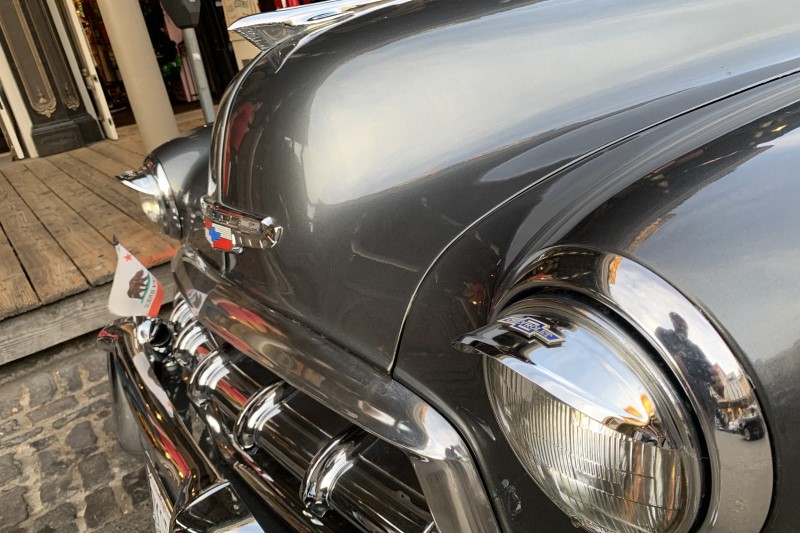 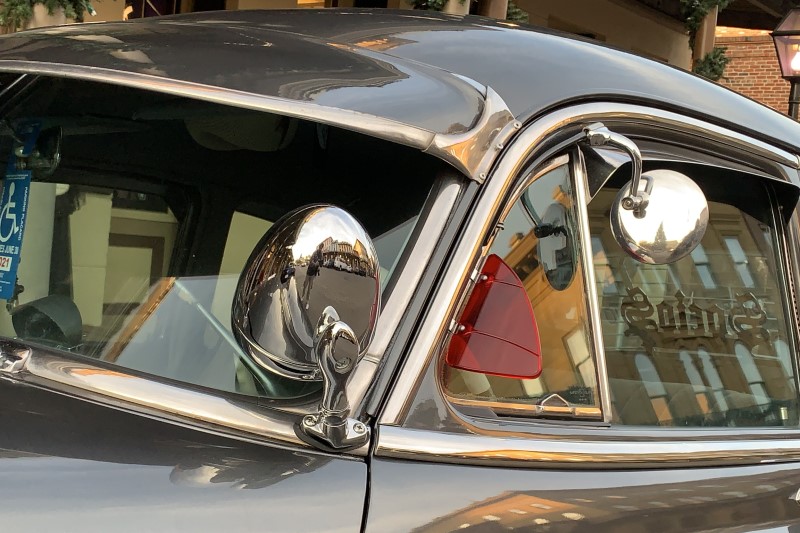 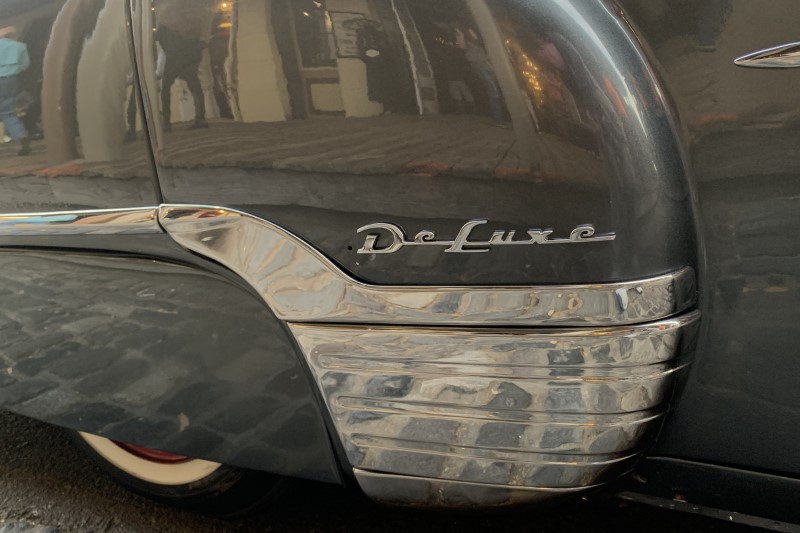 A lot of these cars were done up as low-and-slow cruisers, painted and loaded with accessories. This one wears an understated metallic gray with red steel wheels on whitewall tires with cross-bar spinner hubcaps. All of the brightwork is in place and it features a lot of period-looking accessories including a metal sun shade, chrome bumper guards, spot lights, fog lamps, headlamp eyelids, window rain guards and a rear window blind. I'm intrigued by the tinted transparent red plastic shields on the wing windows and the center of the hood. The hood one is called a Bi-Flector and is supposed to create an air current that deflects bugs, dust and snow from hitting the windshield while the car is in motion. I don't know how well it works but it's an interesting vintage-style feature. You can still get Bi-Flectors from United Pacific. There's a tasteful bit of red pin striping on the hood and trunk to tie together the red plastic accessories and red wheels. I am curious what happened on the back passenger doors, as there's a stray mounting hole to the left of the DeLuxe badging. It appears to me that the badge was placed just slightly off from the original location, but I could be wrong.

It's a clean car, and a nice car. Perfect for taking the family out for some holiday shopping and history appreciation in Old Sacramento.