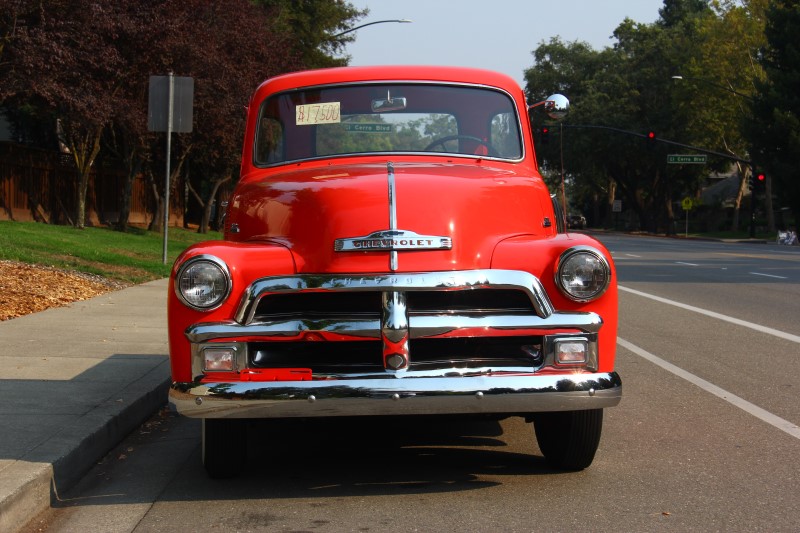 These pictures are old but I quite like the subject matter, so let's take a closer look. It's a 1954 Chevy 3100 pickup truck. 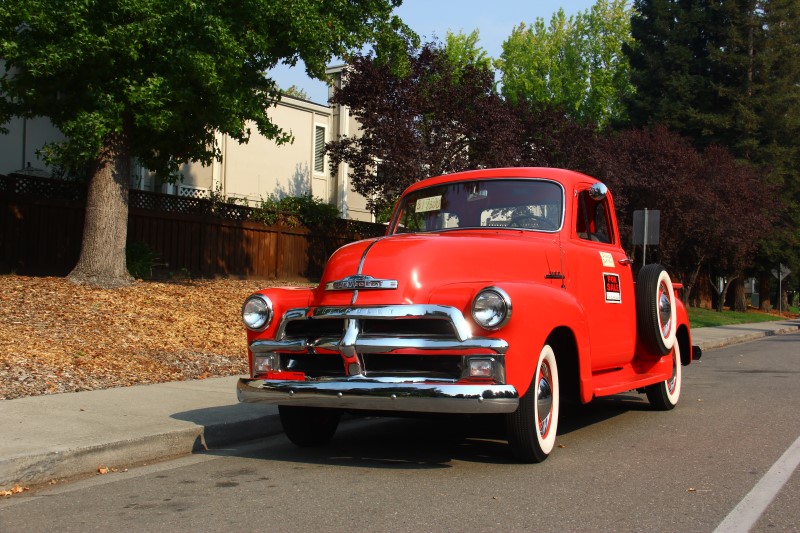 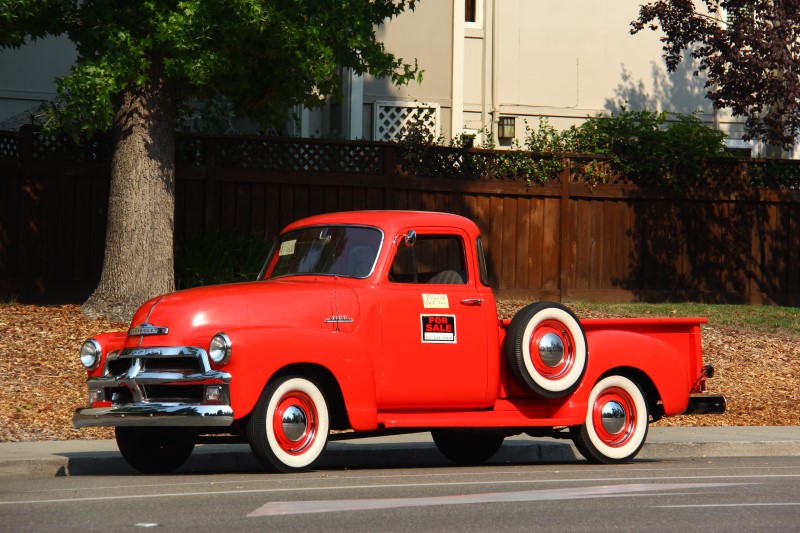 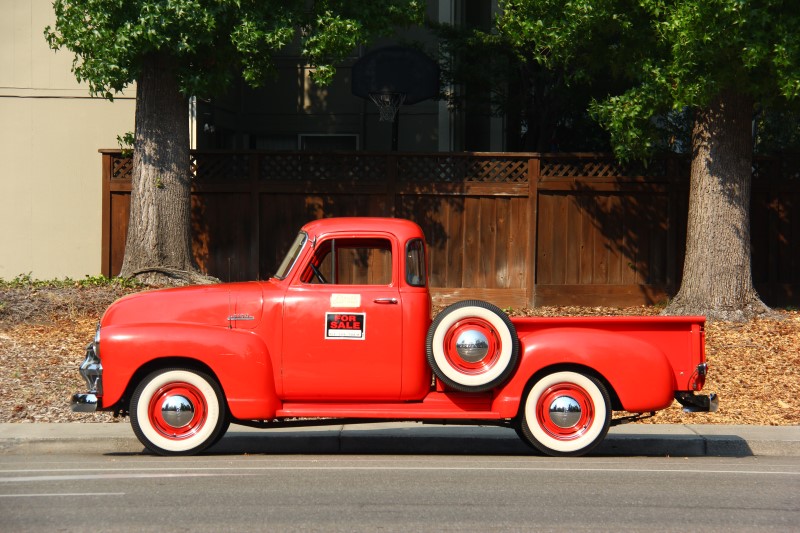 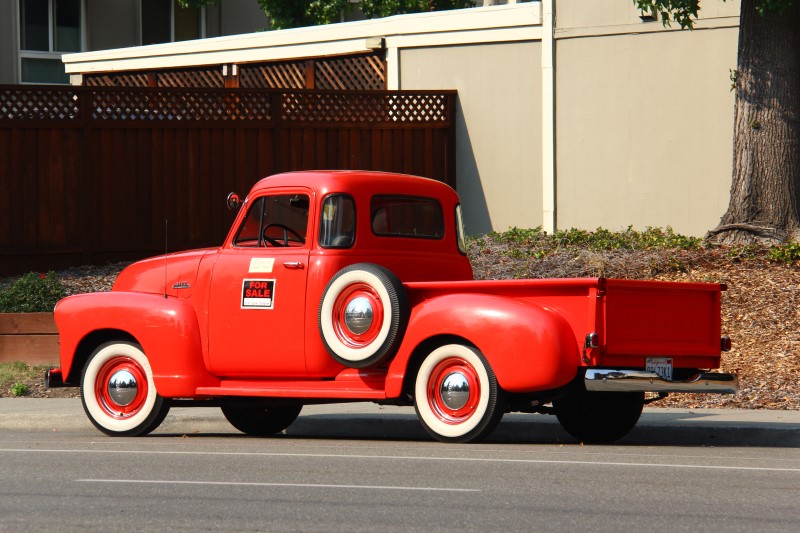 There's a gentleman in Danville who seems to find a lot of cool and unusual vintage vehicles in barns and other places. Sometimes they end up being sold on, and I happen to find them along the main drag in town. I've photographed several of them over the years, with some already being featured here and more to come in the future. The owner seems to favor 1950s GM trucks, and this is one of the cleanest among them that I've seen. 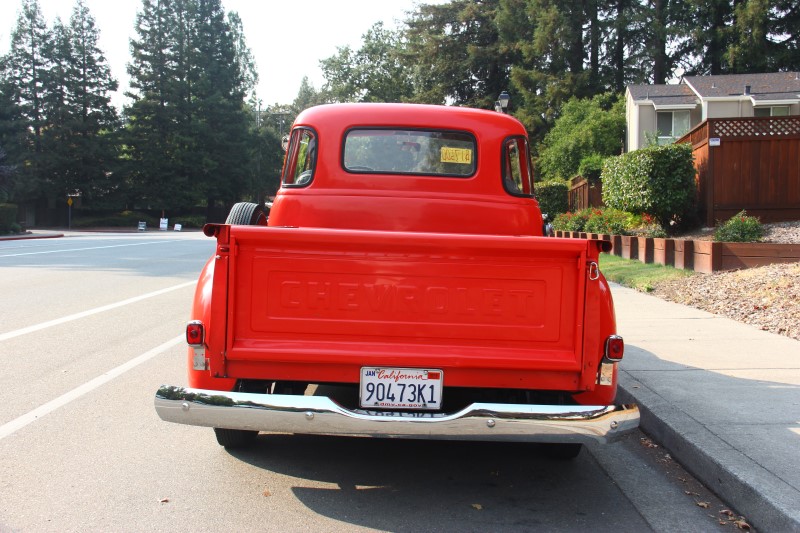 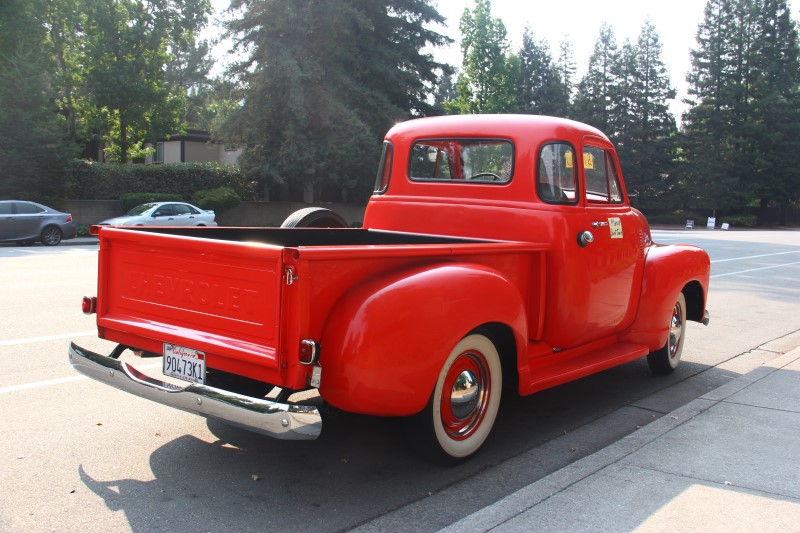 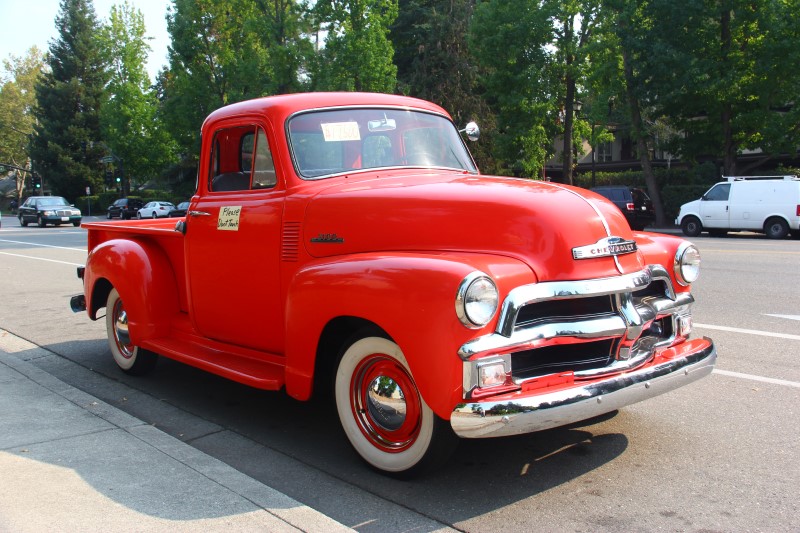 The 1954 Chevy and GMC trucks looked very similar to the 1947-53 Advance Design series. However, it was much more than just a new grille. The 1954 trucks featured a new one-piece curved windshield. The venerable 235 cubic inch Stovebolt six was much improved and based on the 1953 Chevy passenger car engines. It produced up to 112 horsepower and 200 pound-feet of torque. A Hydra-Matic automatic was offered at extra cost. The lack of a gear indicator on this truck makes me think it may have the standard 3-speed manual. A hood ornament was offered but not equipped on this truck. 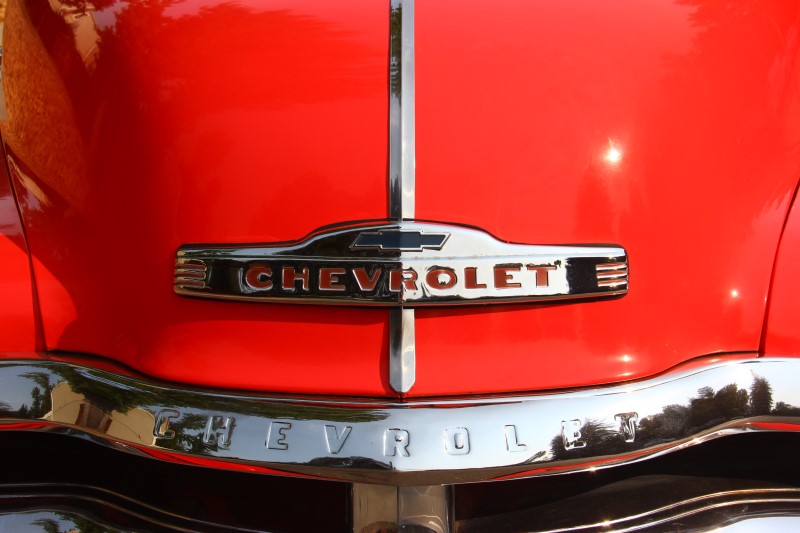 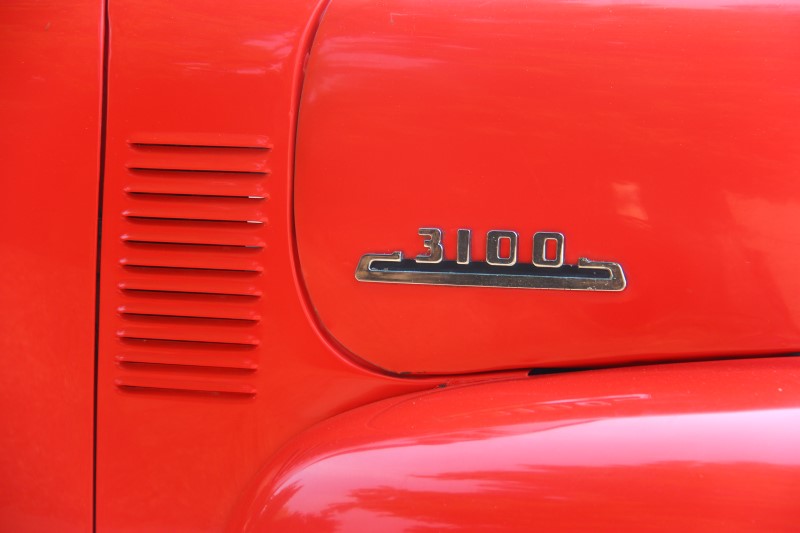 It's no wonder that most of these trucks were originally painted drab commercial colors; they were workhorses. Unlike the present day where people drop $80,000 on a chrome-laden GMC Sierra Denali or Ford F-150 Platinum as a daily driven status symbol, in 1954 a pickup truck was a utilitarian rig with drum brakes and leaf springs. A ton of options and accessories were available for it, but most came at extra cost that few wanted to spend. A fleet manager or a farmer wasn't going to spend $22 on an exterior metal sun shade or $8 for a chrome hood ornament. Even turn signals were extra-cost options. If it came down to spending $65 on a heater, or $69 on a radio, which would you choose? That $69 in 1954 is worth $667 in 2020. 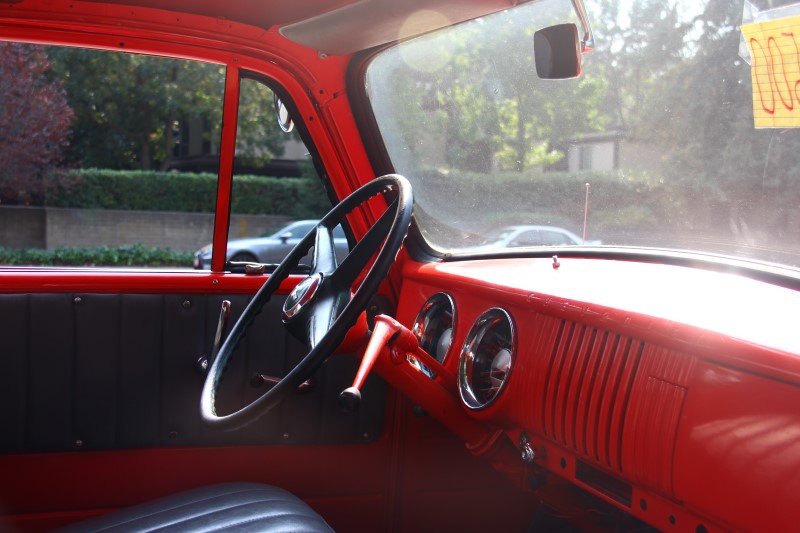 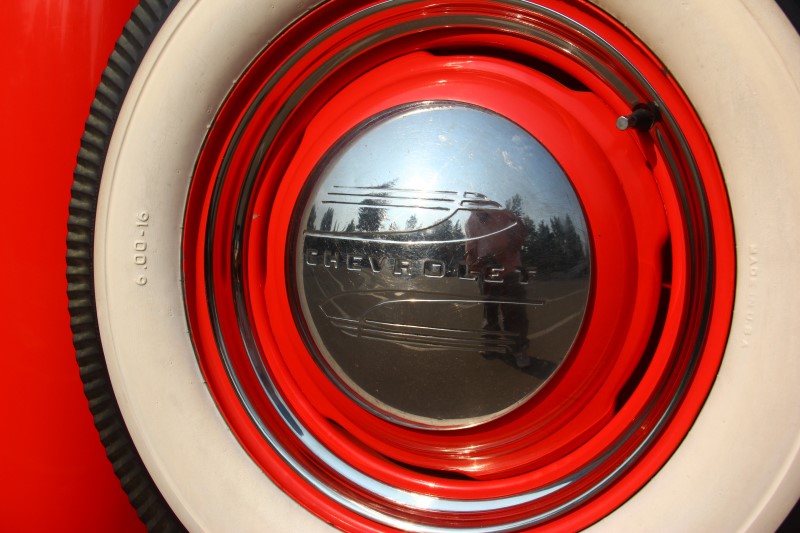 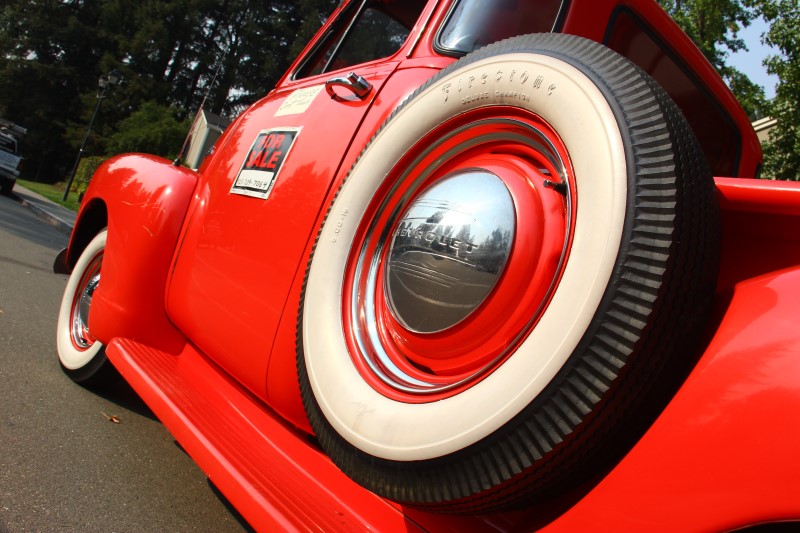 This truck is a nicely equipped example with full chrome bumpers front and rear, cab corner windows and color-matched steel wheels with hub caps and trim rings. It rides on Coker Firestone replica "pie crust" bias ply whitewall tires that really class it up. I have to wonder what this truck looked like from the factory since most came with painted bumpers and grilles. The red looks brighter than the "Commercial Red" offered that year. The bench seat and door panels look like black vinyl in place of the brown leather that would have come from the factory. The radio is absent. This little red hauler looks like a great starting point for a build that hopefully preserves as much of the great "mostly stock" appearance it already has. It's probably good enough as it sits to be enjoyed on nice days. Maybe a radio, maybe a Vintage Air system if you absolutely must have modern creature comforts. Maybe just throw a cooler in the bed and cruise on down to the beach, or take it to grab some little things from Home Depot just for fun.