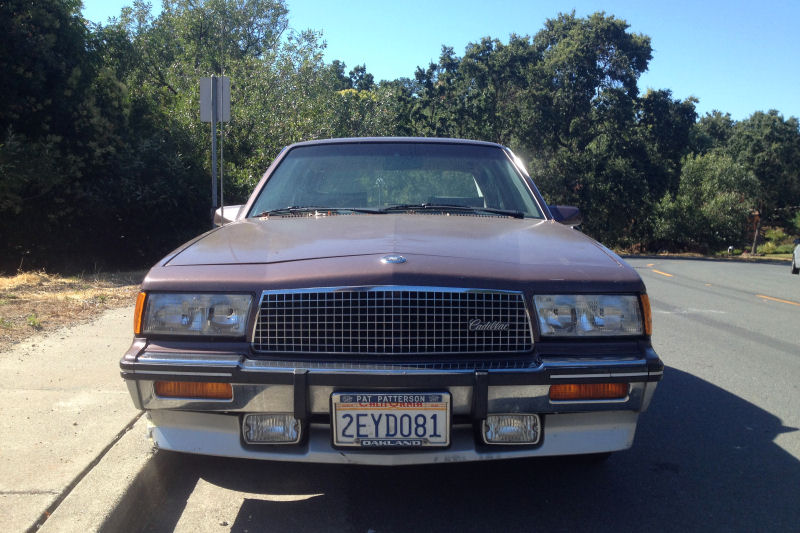 My local iHeartRadio station has been advertising heavily of late. They're celebrating their one-year anniversary of their broadcast format, 1980s rock and pop music. So this week I'm featuring only cars that are firmly products of their era... the '80s.

First up this week is a car that many still believe should never have been made. It's the Cadillac Cimarron. Or if you go by the sales literature, "the Cimarron, by Cadillac". 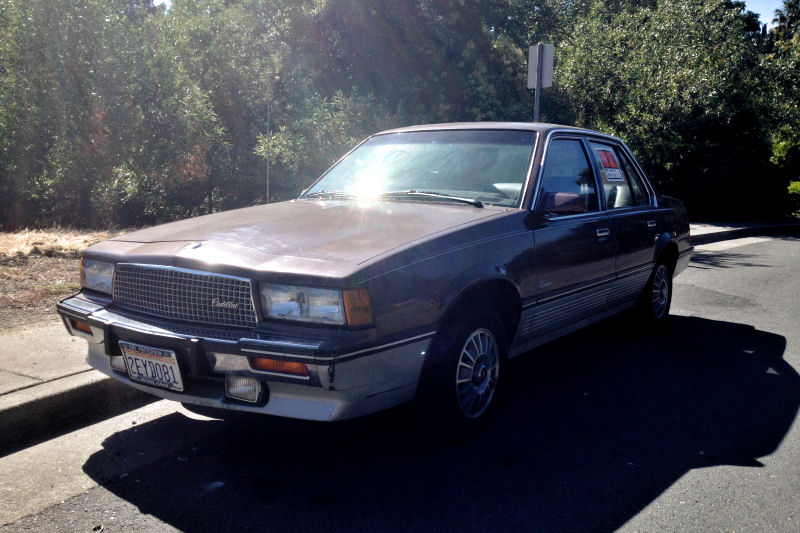 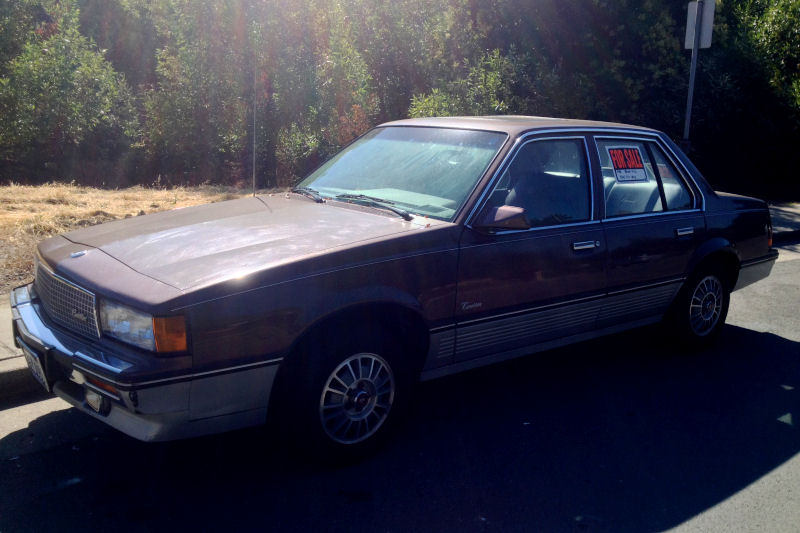 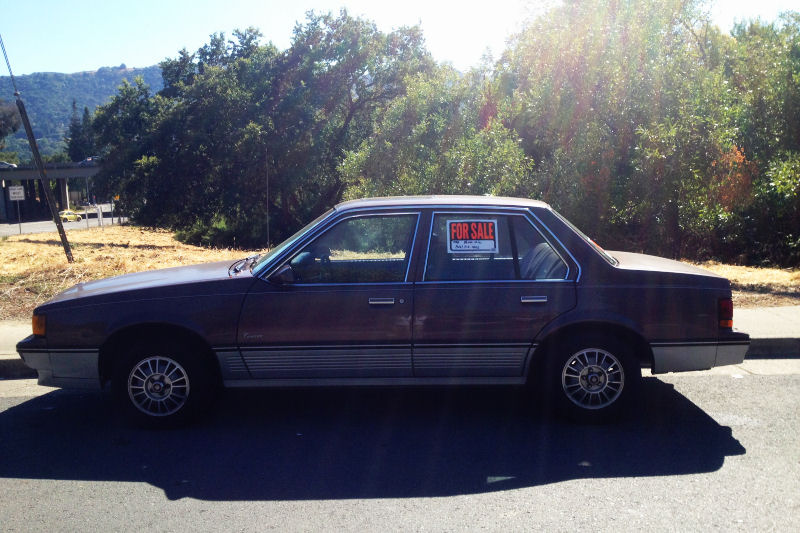 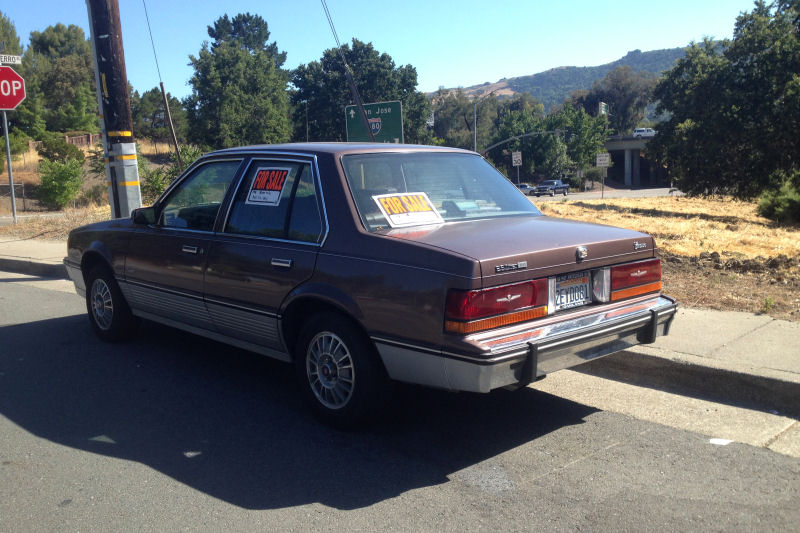 Several years ago I did a "Best of the Rest" post called The General's Privates. It was dedicated to rarely seen versions of General Motors J-body compacts that I had photographed in passing. Most were Cimarrons. In recent years a good Cimarron specimen has become pretty scarce. I found this one for sale in Danville, advertised with only 76,000 miles. It looks like an older person owned it judging by the low mileage and good condition apart from, well, let's face it. My grandma bumped into a lot of things with her last car. This one has found a few solid objects in its time but is very well kept. 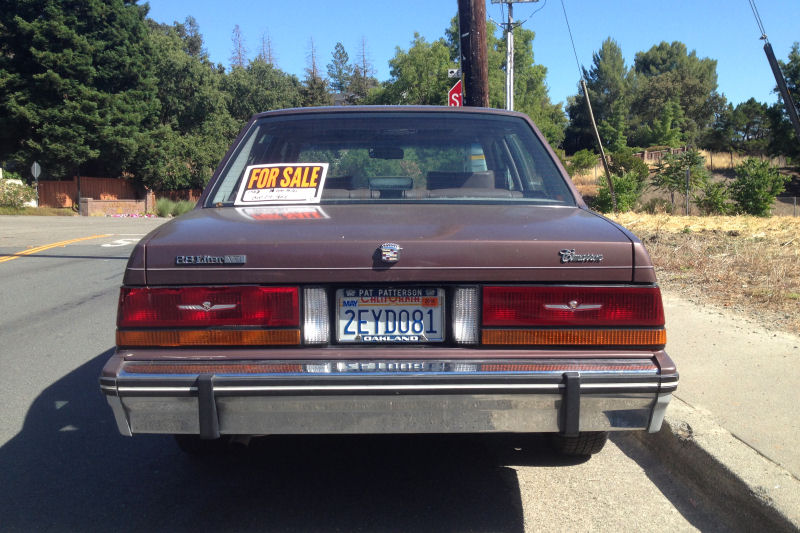 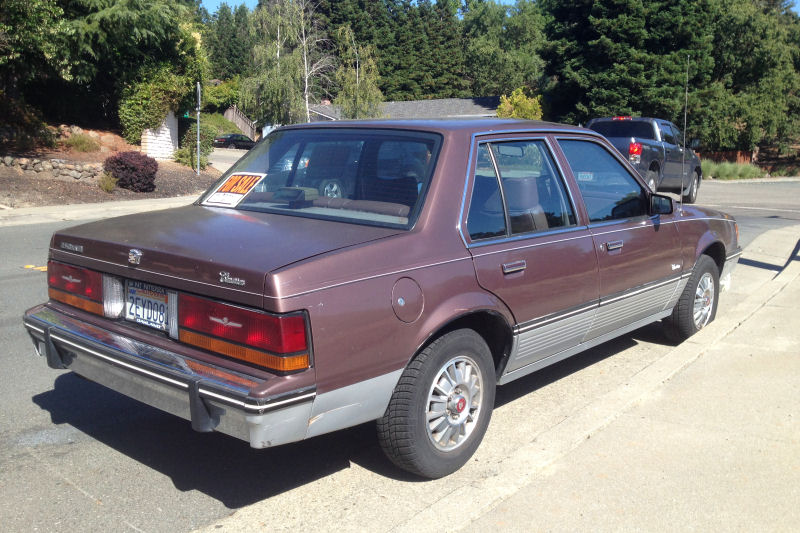 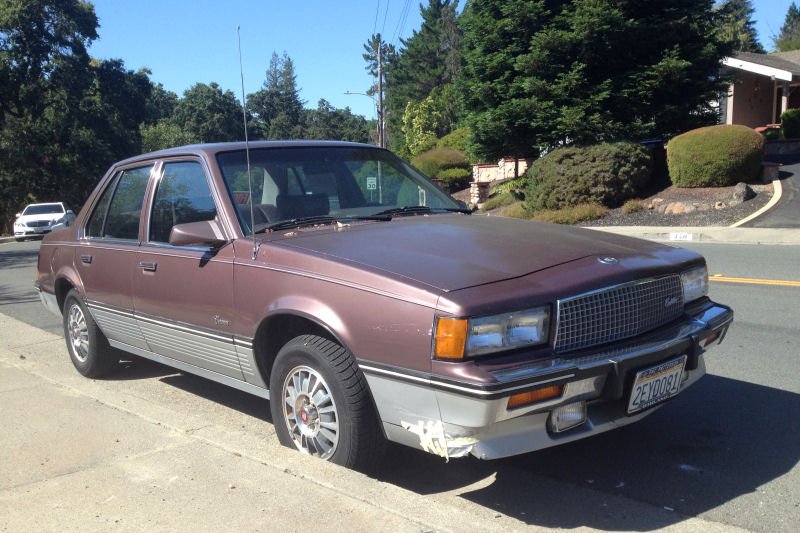 The original 1982 Cimarron was what happened when GM took a Chevy Cavalier and put a few Cadillac badges on it. A little nicer interior with leather seats and air conditioning, some extra chrome stripping, slightly beefed-up suspension, optional sunroof, optional trunk rack. Standard 1.8 liter four-cylinder Cavalier powerplant with four-speed manual transmission. In a Cadillac. And you could delete the dashboard clock for credit on the order form. In a Cadillac. Oh yes. The new car didn't even have the traditional stand-up hood ornament, just a Cadillac crest tacked on the center of the grille. What it did come with was a $12,000 price tag (nearly $32,000 in 2017 dollars). 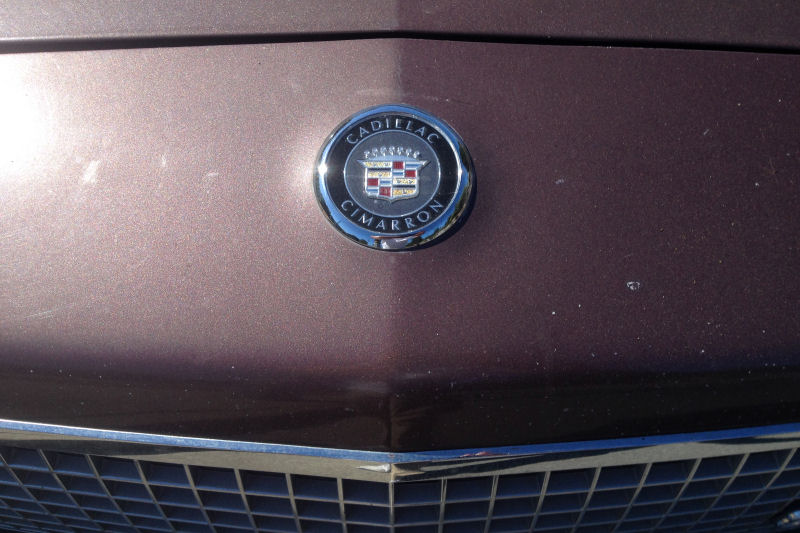 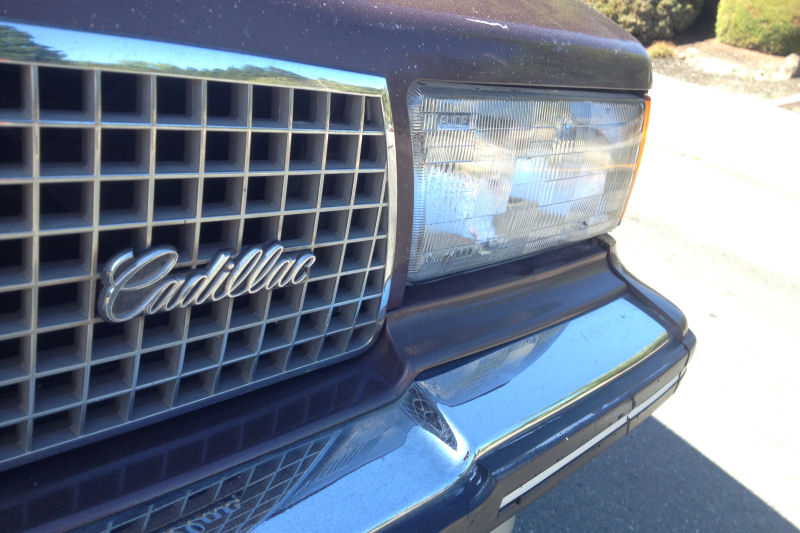 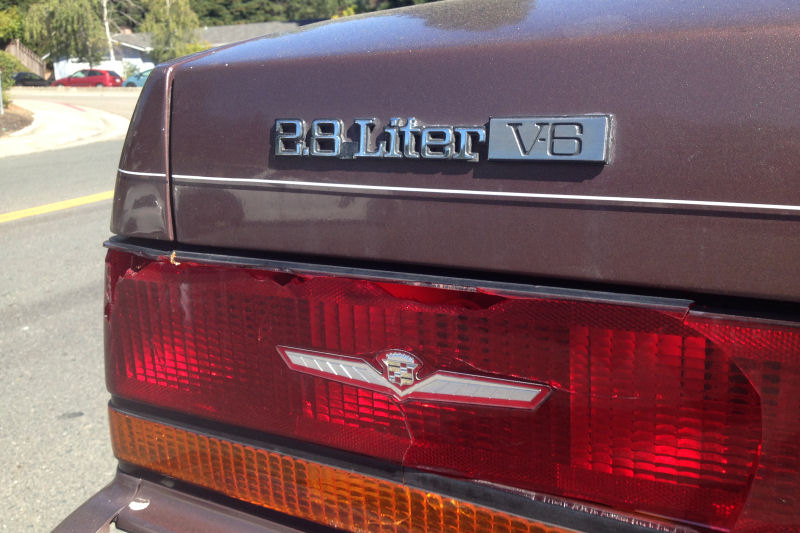 Cimarron grew up a bit over the course of its production run. It was quickly refreshed and upgraded with a new grille, halogen fog lamps, new 13-inch alloy wheels, an extra gear for the manual and larger 2.0 engine with fuel injection. The 2.8 liter corporate V6 was added as an option for 1985, and finally became standard for '87. New composite halogen headlamps and restyled fascia were added to give the Cimarron a more modern, less "Chevy" appearance. Buyers could also get a proper Delco/Bose stereo system and 14-inch wheels, and the option of cloth seats if they wanted to save a few pennies or just not burn their backside on hot days. By that time the Cimarron was getting to be a somewhat decent premium compact. But it was still a Cavalier underneath it all and there was almost no one left to fool into thinking it was an actual Cadillac. 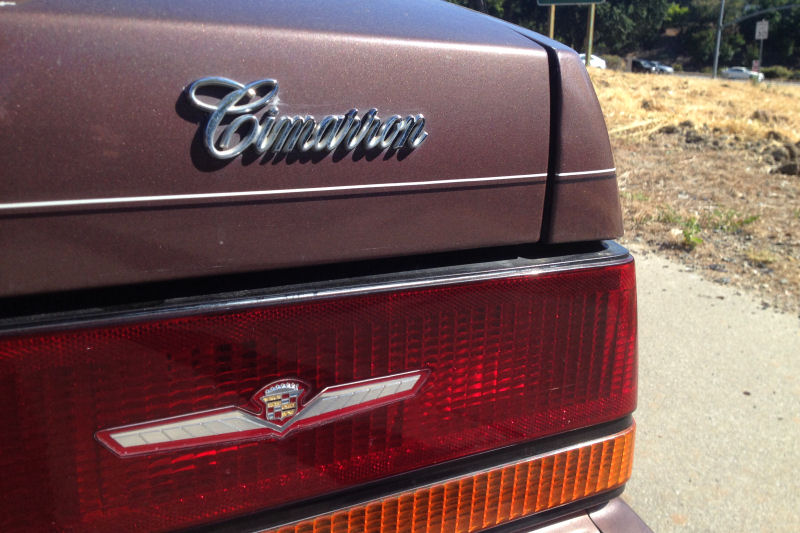 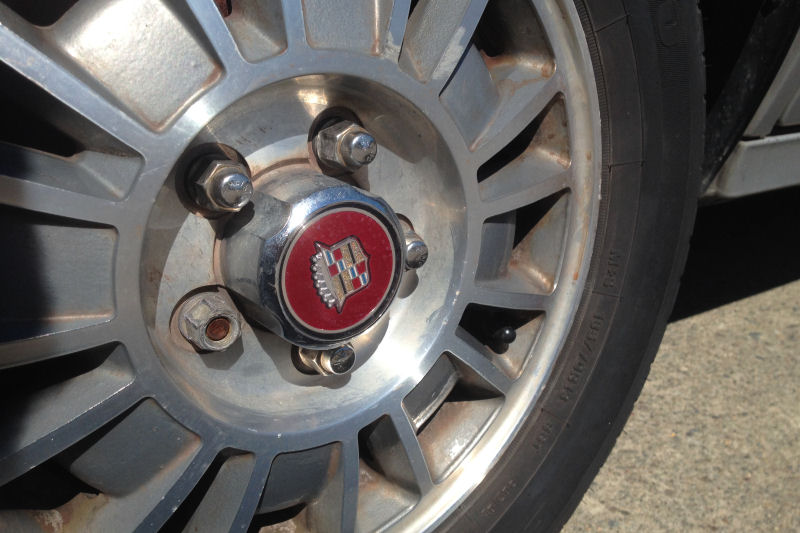 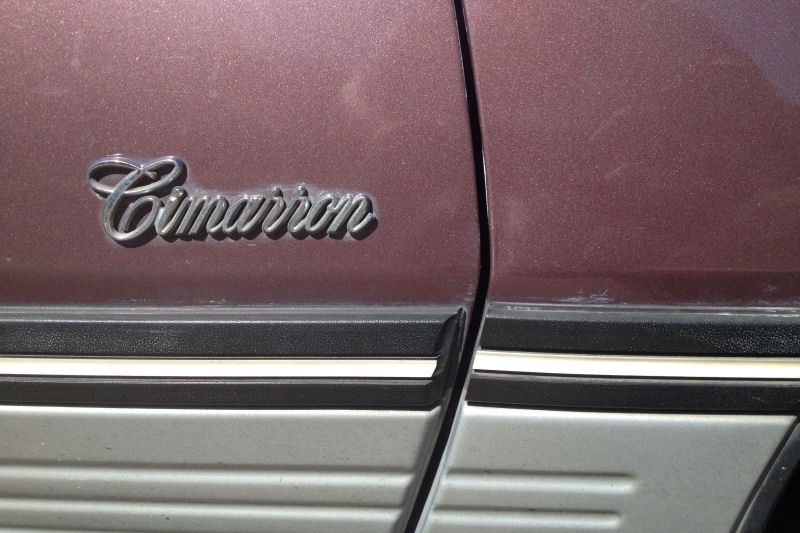 The business case for the Cimarron could have worked. Chrysler successfully developed their small, boxy, front-wheel-drive economy K-Cars into relatively luxurious LeBarons. Chrysler believed that small FWD luxury cars were the future. Ford didn't have a very good time experimenting with small Lincolns and certainly never tried making a Lincoln version of, say, the Escort. The Ford Granada-based Versailles sedan of the late 1970s is remembered today only because hot rodders like to use the rear axles. Compact luxury cars were a difficult lesson for domestic automakers to learn, one that they're still learning today in order to compete in the global market. The Cimarron showed that you can't rush a product and expect people to love it.

Photographed June 2017
Posted by Jay Wollenweber at 12:00 AM