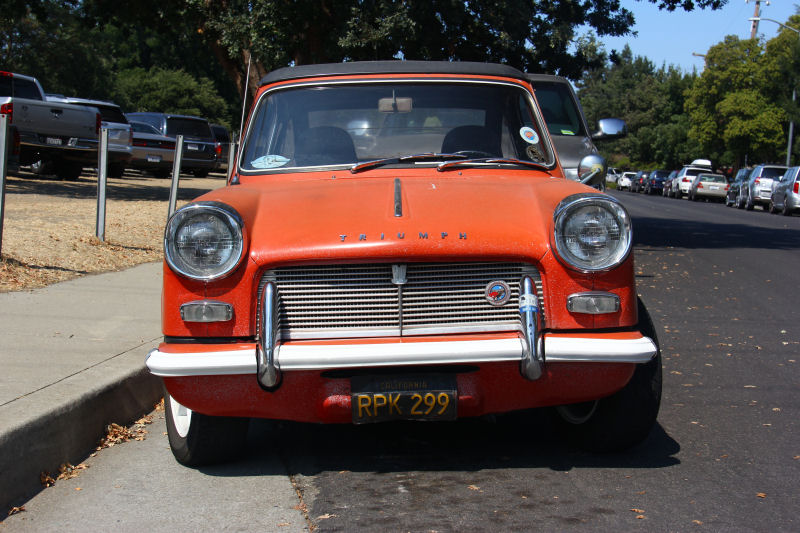 This feature was several years in coming. I first saw this 1967 Triumph 1200 Sports roadster in March 2008, parked on the street near the Alameda County Fairgrounds during a Goodguys Rod and Custom Association car show. Back then it was wearing a set of vintage silver turbine wheels. The next time I saw it, in 2010 in Livermore, the Triumph was sitting on English-made Cosmic Mk1 road wheels painted white. I photographed the car that day but it was in angled street parking and I couldn't get a good profile. That, and the owner showed up during my shoot and needed to leave. I finally got lucky in summer 2015 when I was returning to my car after another Goodguys show and the Triumph was sitting near a railroad crossing a few blocks from the fairgrounds. 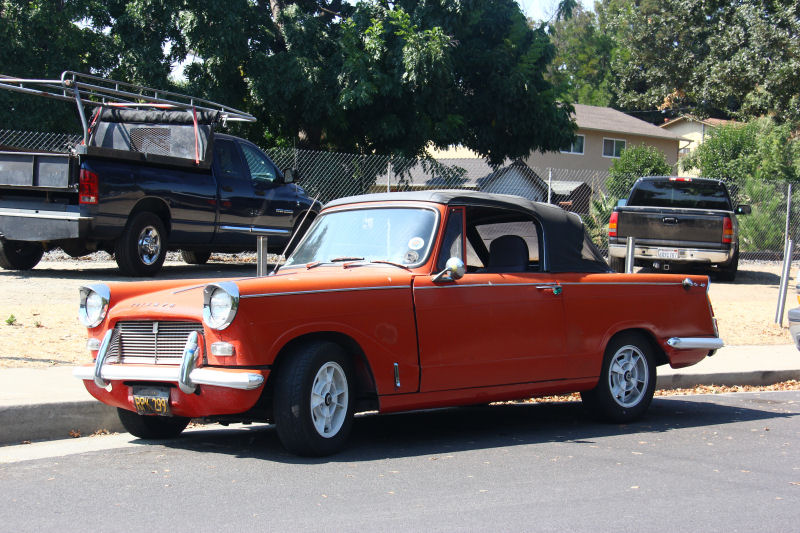 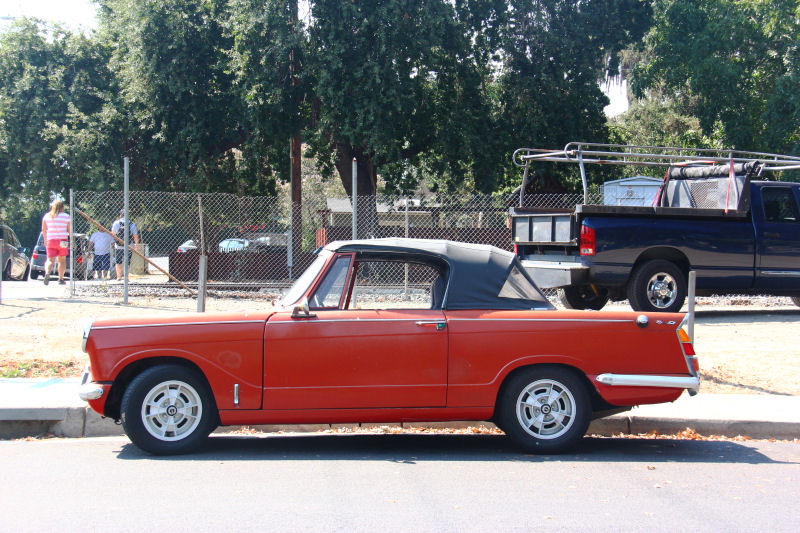 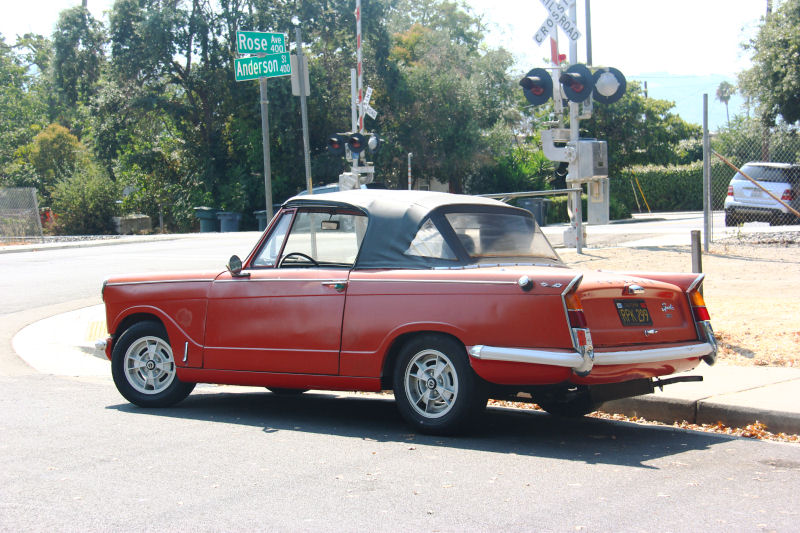 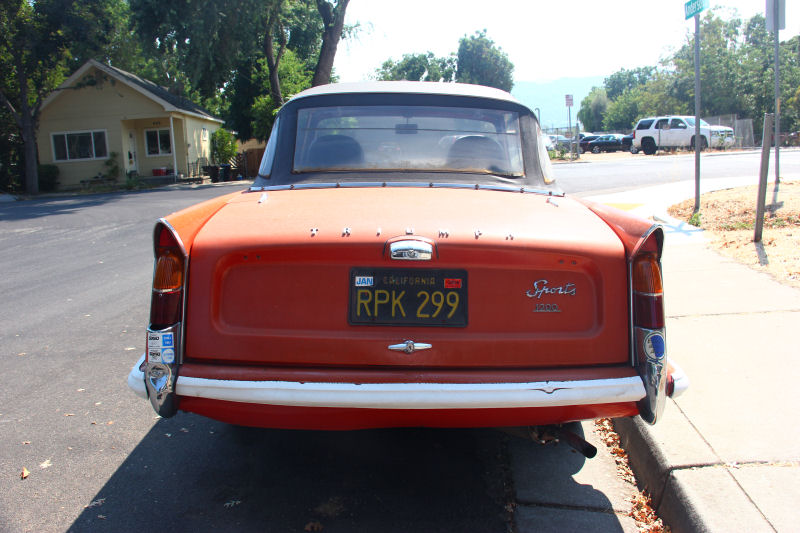 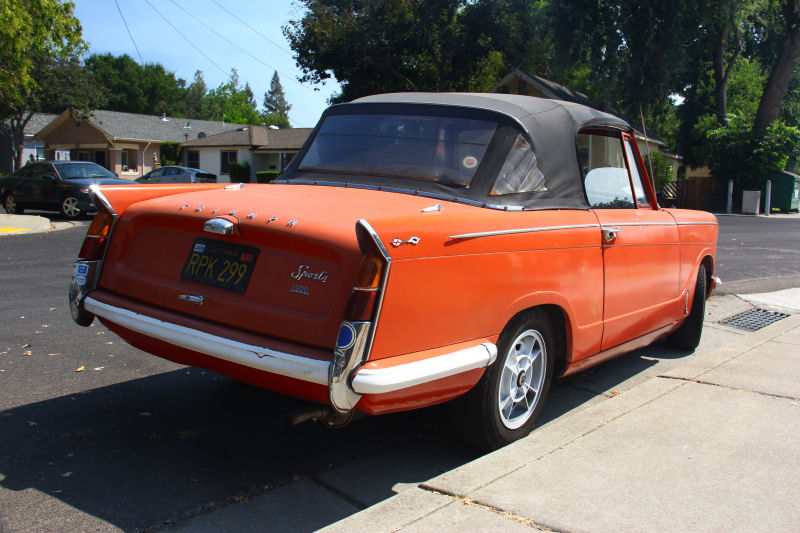 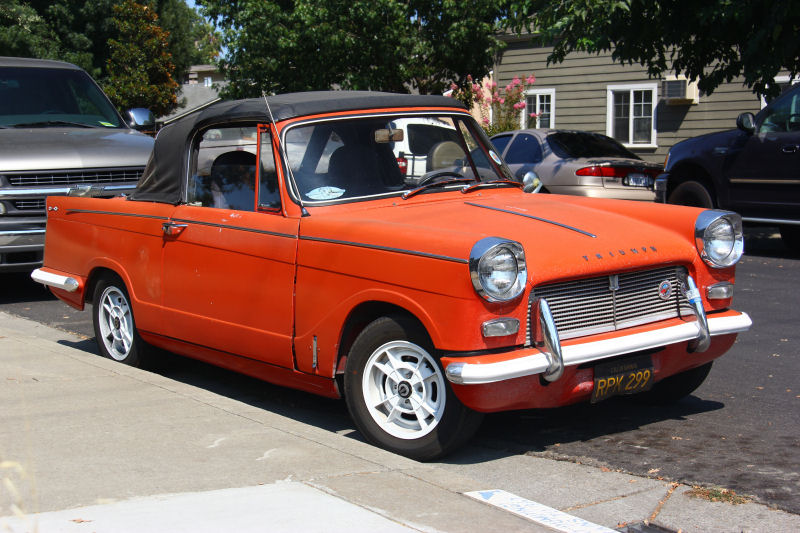 The Triumph 1200 was an American-market version of the Triumph Herald, a small car produced from 1959 until 1971. The Herald was offered as a two-door sedan, coupe, convertible, station wagon and van. Its chassis was also used as a base for the six-cylinder Vitesse, and the Spitfire and GT6 sports cars. Over half a million were sold worldwide, but the car was never especially popular in the U.S., probably because it was relatively primitive, slow and handled poorly (though turning radius was impressive thanks to its rack and pinion steering). Power output from a 1967 1200 Sports like this one was 48 horsepower. Anyone in the U.S. today probably associates the Triumph Herald closest with the BBC's Top Gear and the ill-fated Herald sailboat that presenter James May built for the show's Amphibious Cars challenge. 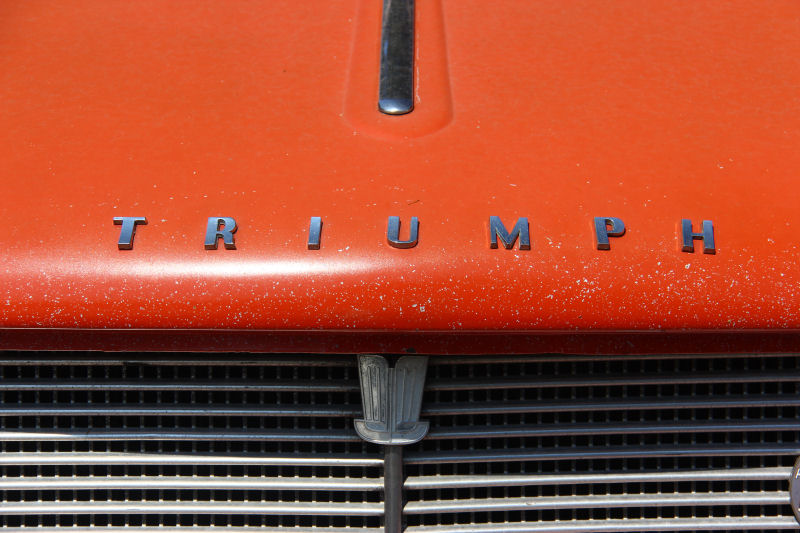 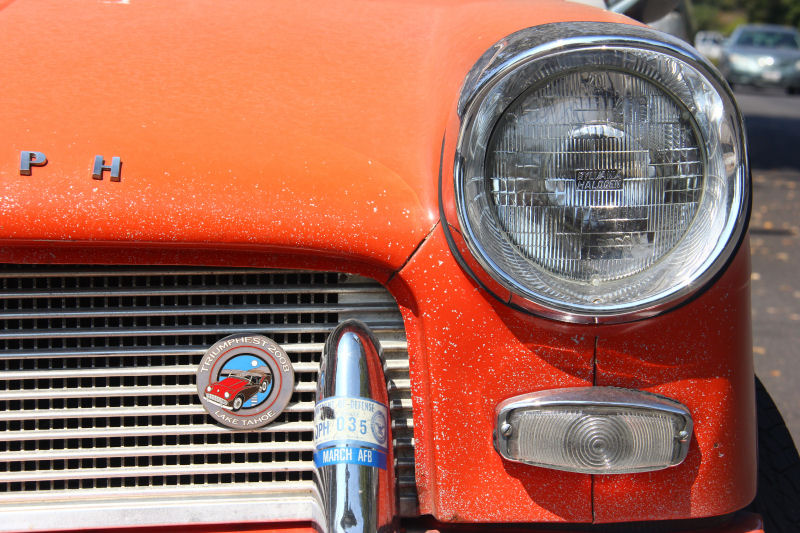 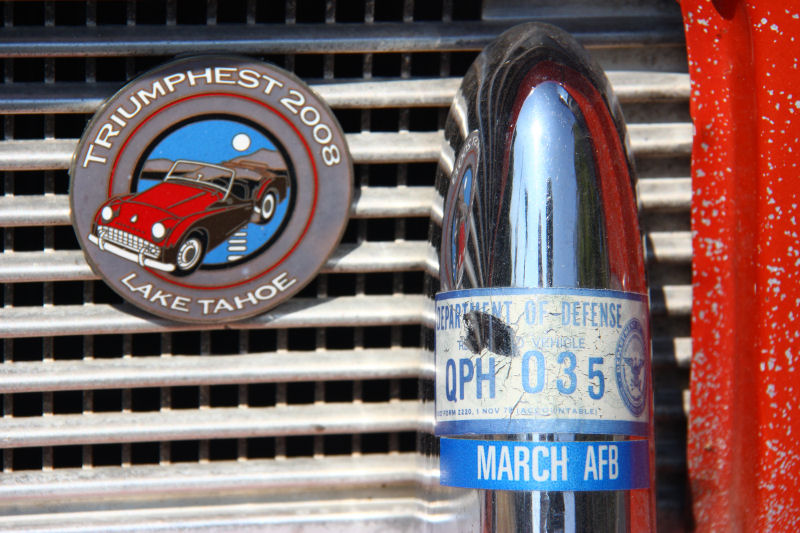 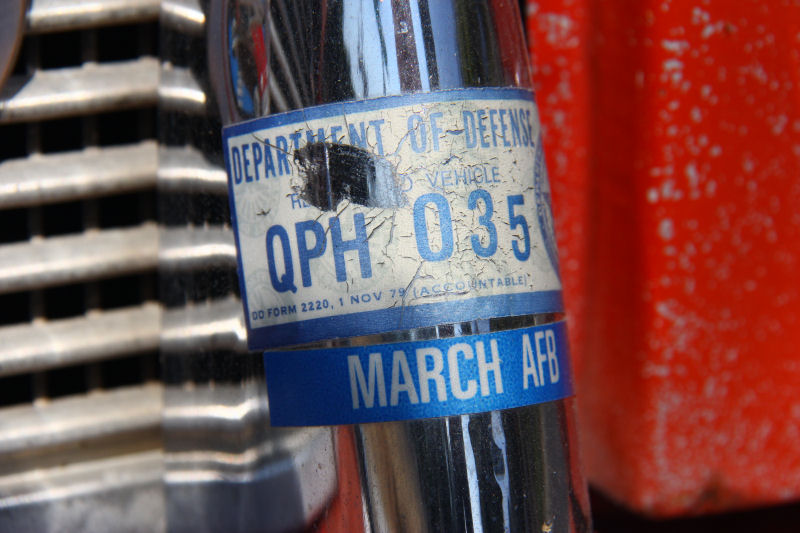 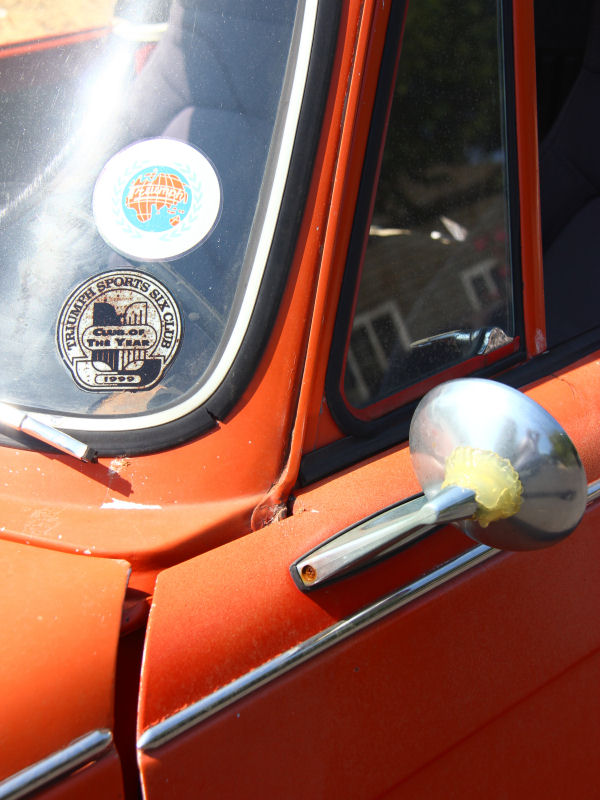 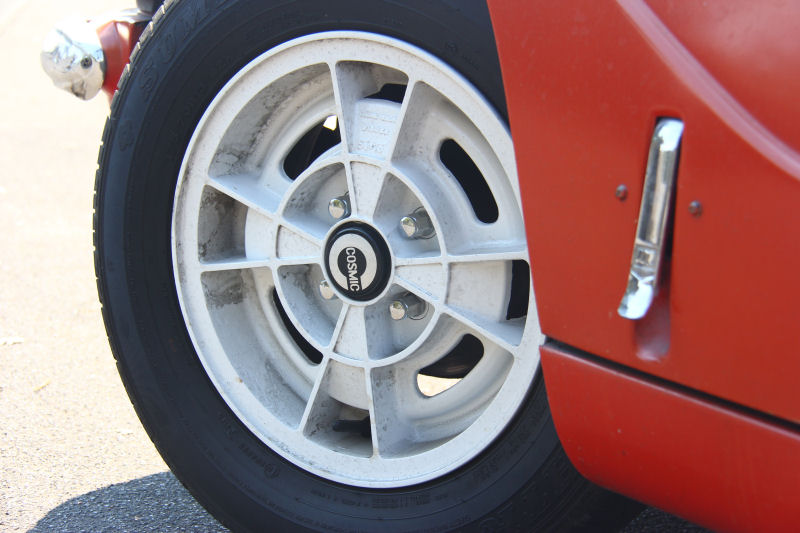 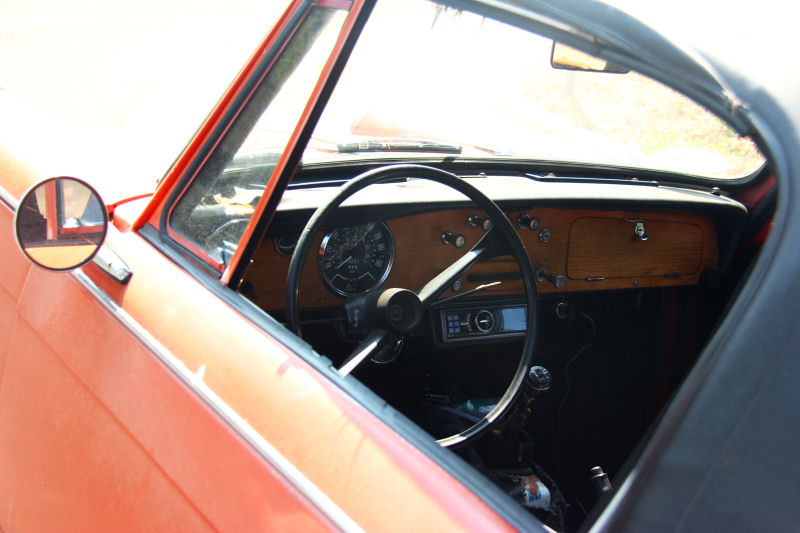 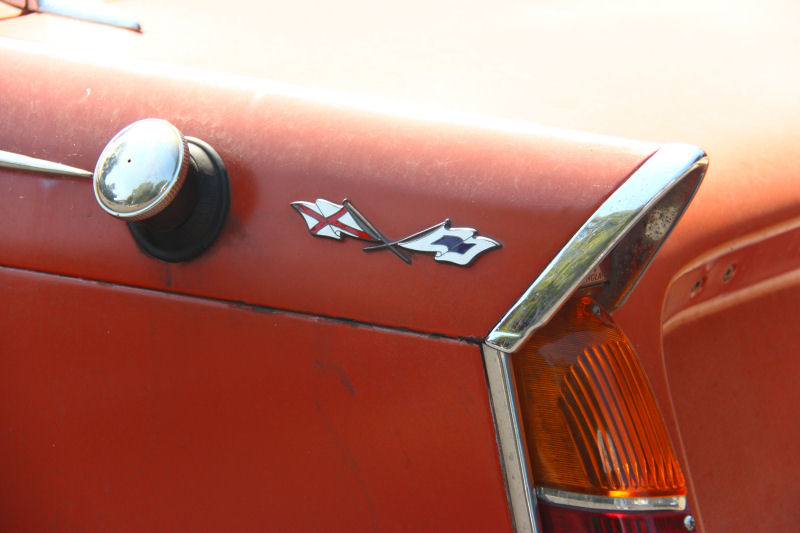 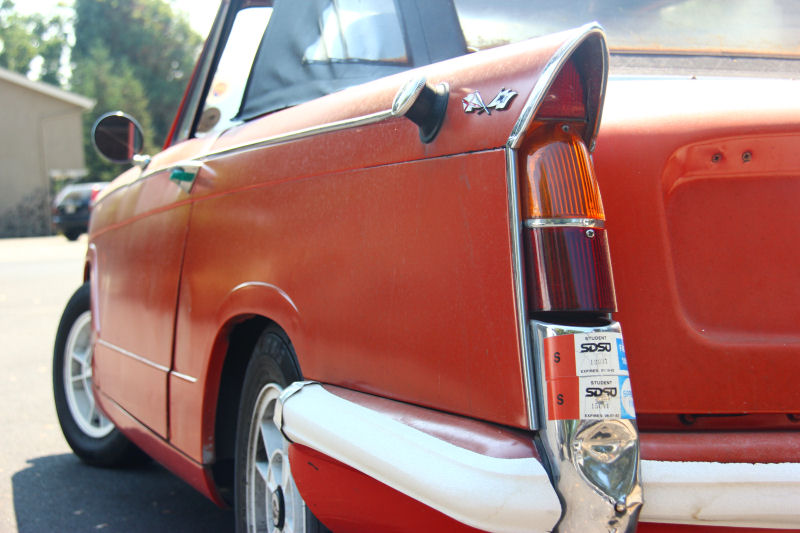 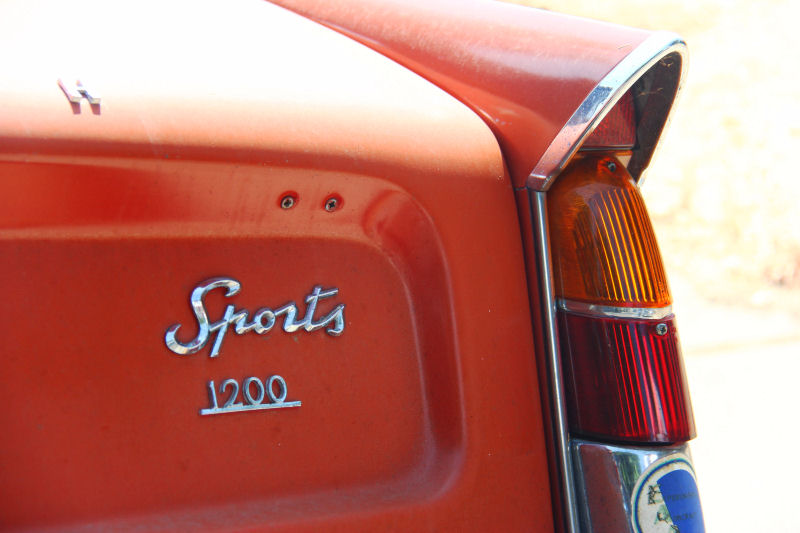 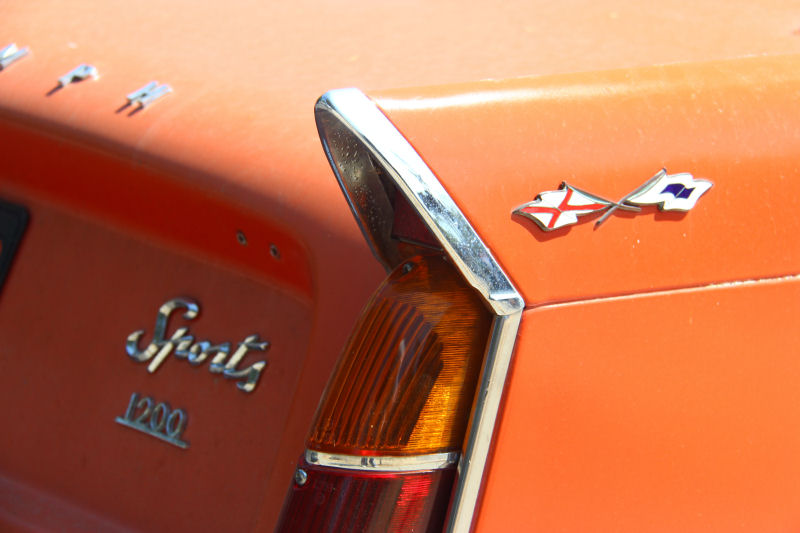 Part of what draws me to this particular Herald, aside from it being a Herald that still exists, is just how original it is. The orange paint might be factory (or at least period) "Topaz" though it could be a faded Pimento Red. The interior seems original with the exception of the modern stereo unit and the exterior body trim is all there. I love the old stickers, particularly the 1979 parking permit from March Air Force Base in Riverside County, California. The Cosmic wheels wouldn't be my first choice on a car like this, but they're a rarely seen style so they make the car more unique. I wondered about the four screws in the trunk lid; they look like mounting points for a luggage rack. I'm glad to see a vintage Triumph car that isn't a TR6 (though I love them) and seems reliable enough to spend the day out cruising rather than in the garage wrenching.