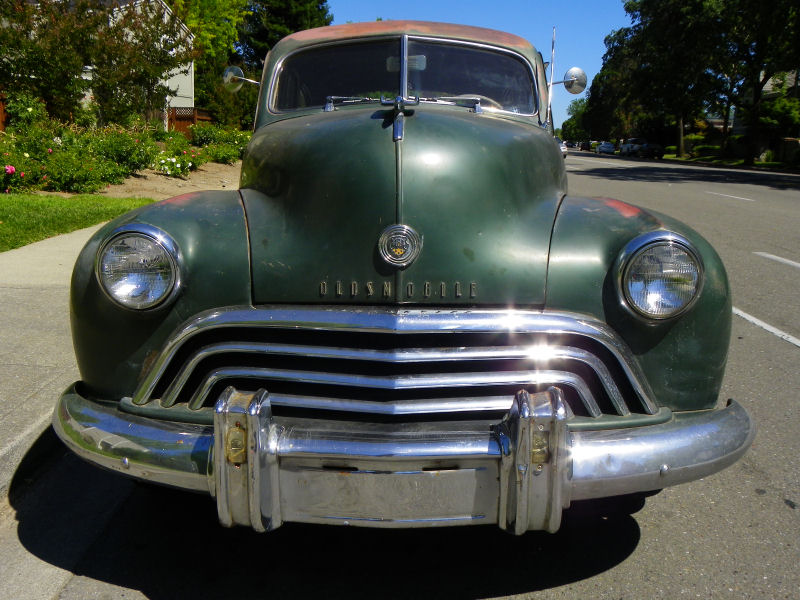 It's almost safe to say I've seen more custom cars with late-1940s Oldsmobile grilles than actual Oldsmobiles from that era. It's as if everyone scrapped them and forgot they existed. Fords, Chevys, that's all that seems to come out of the woodwork. The occasional Buick, Cadillac, Mercury or Chrysler product will pop up now and then, but Ford and Chevrolet seem to dominate the American classic car population and Oldsmobile is rarely represented. A postwar Olds, even a garden-variety four-door, is a red letter find for me. 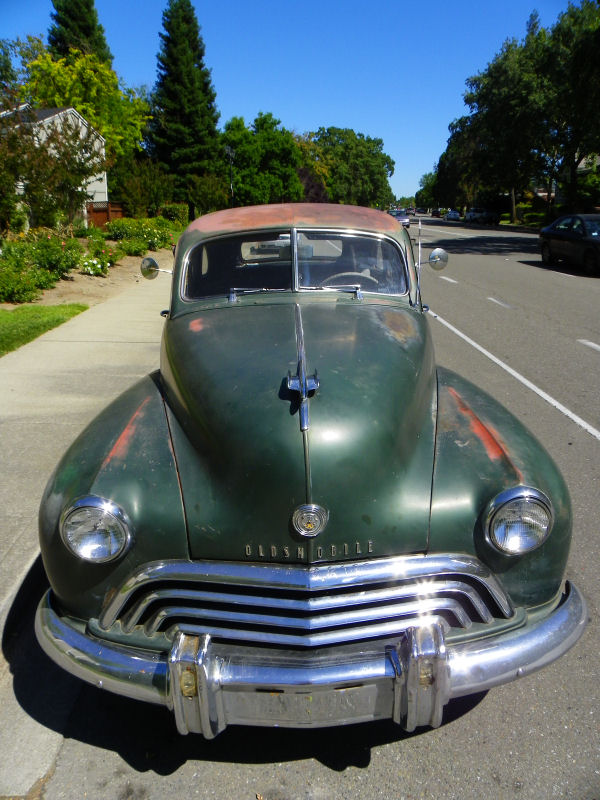 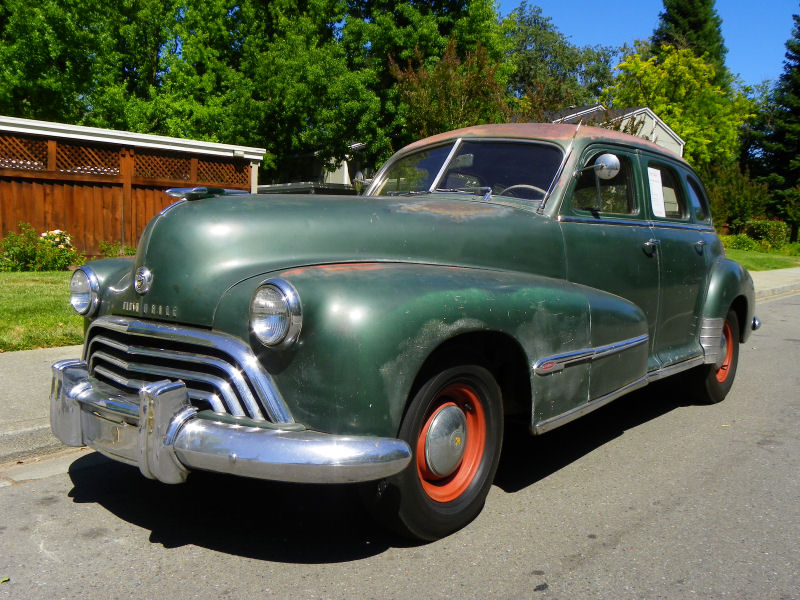 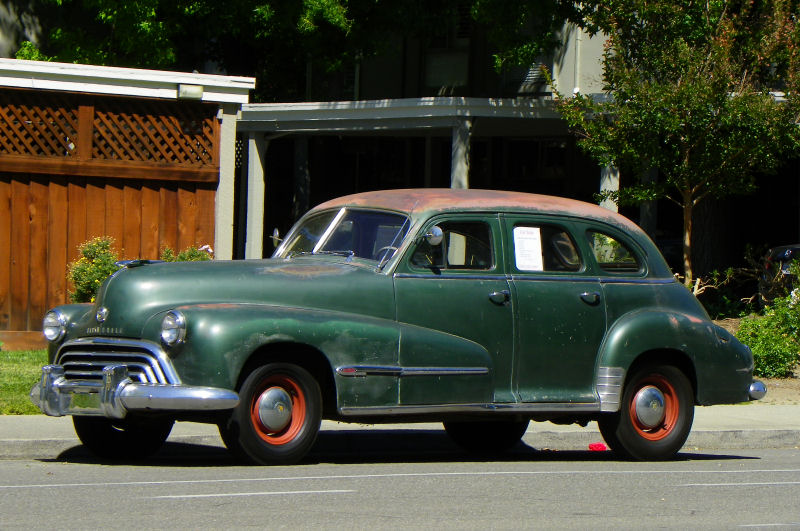 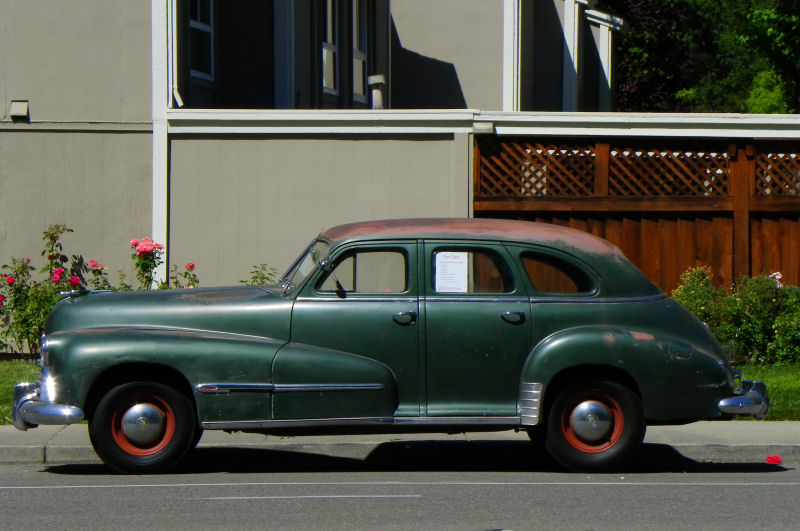 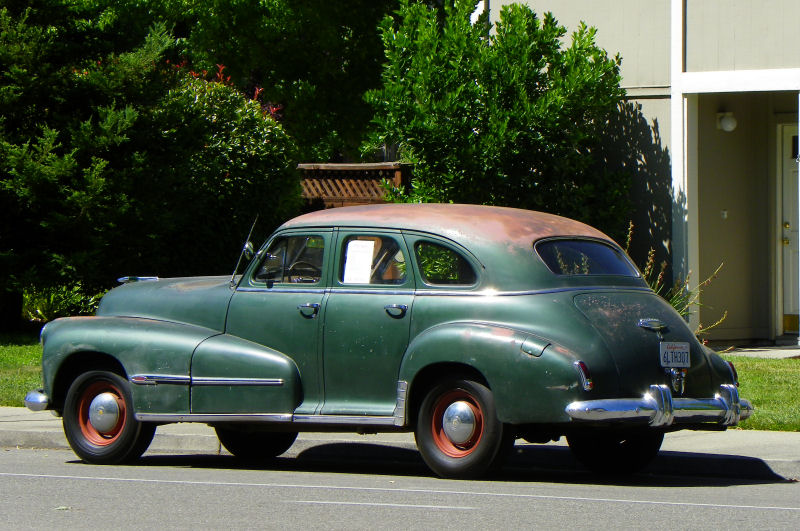 This is a Series 60 four-door sedan, marketed as the Dynamic 68. It was the smallest sedan in the lineup, and available with a straight six or straight eight (the 6-cylinder model was called the Dynamic 66). Oldsmobile touted in their brochure that "'Dynamic' is more than just a name ... it's an action-word ... suited to the 'personality' of these action-styled, action-engineered cars" (emphasis theirs). And we all know the marketing department is never wrong. If you don't notice that the body is a Chevrolet Stylemaster with longer fender extensions in the doors, its lines are flowing and rather pleasing. The downside is that apart from the grille design and taillight placement it looks almost identical to a comparable '48 Buick Special, Pontiac Torpedo or the aforementioned Chevy Stylemaster. 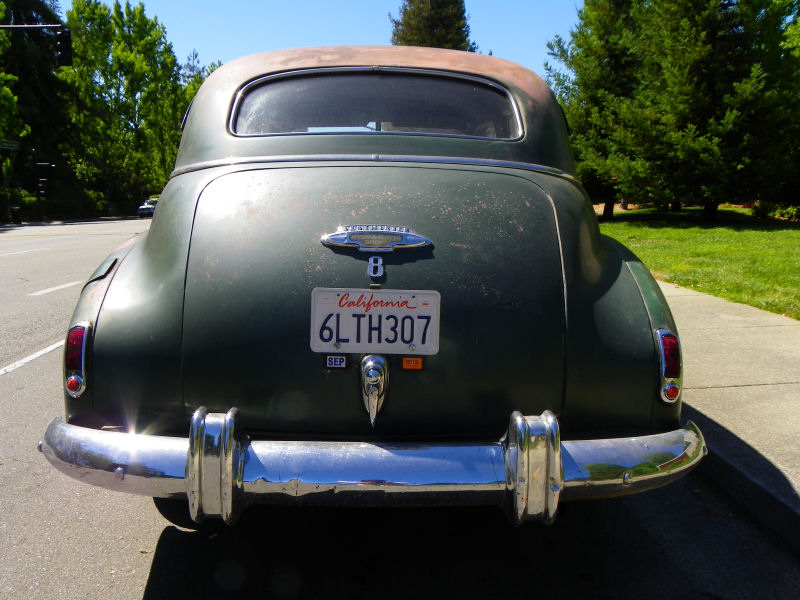 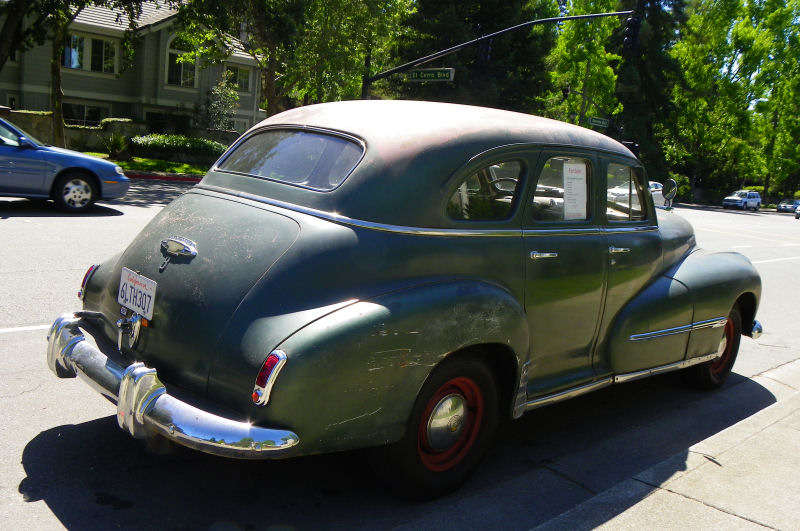 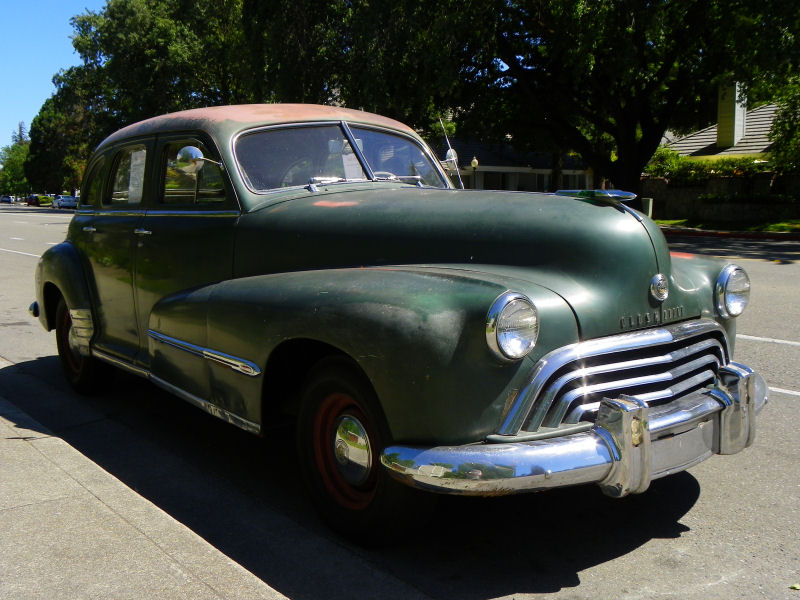 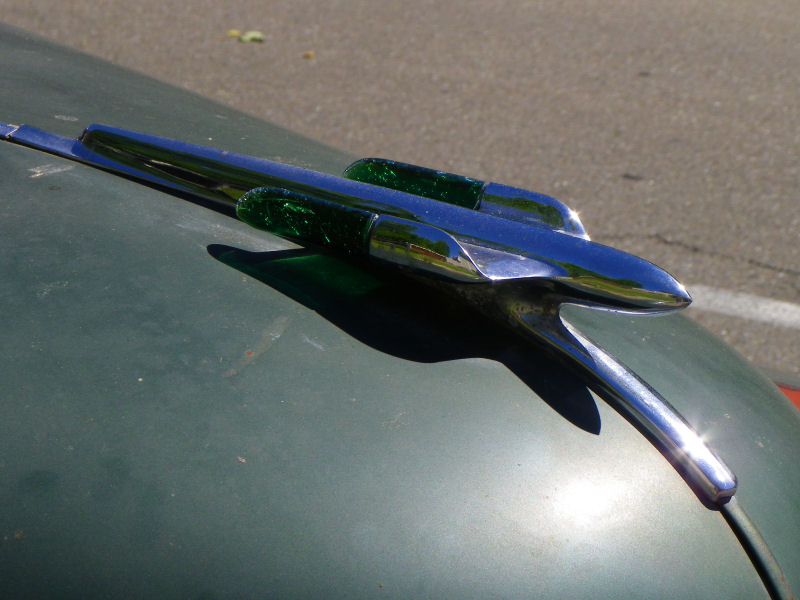 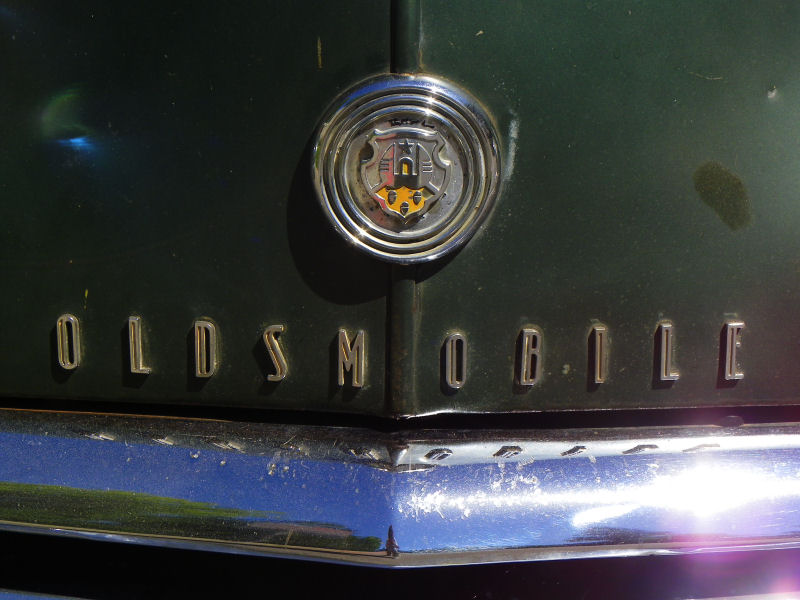 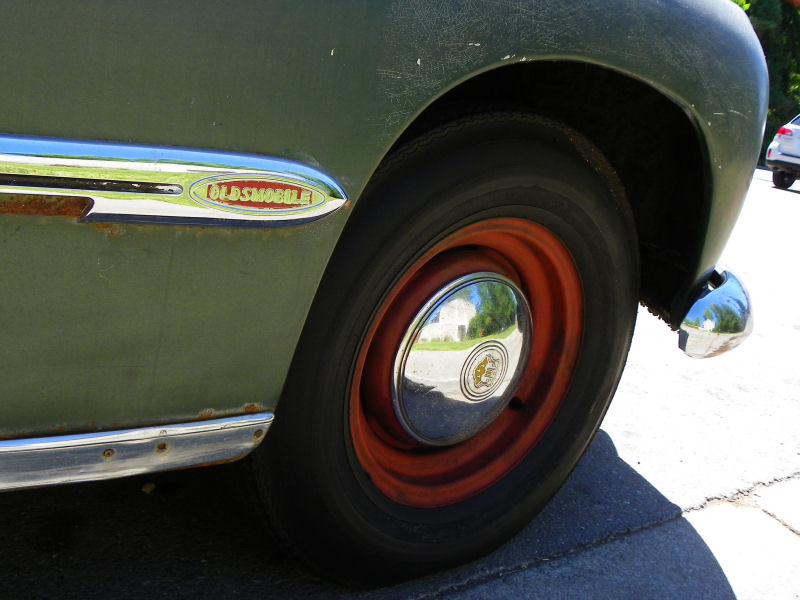 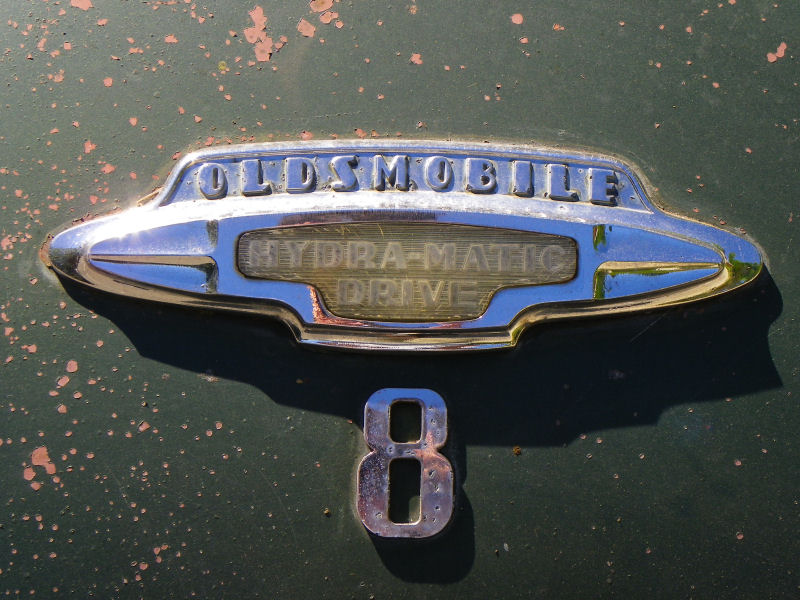 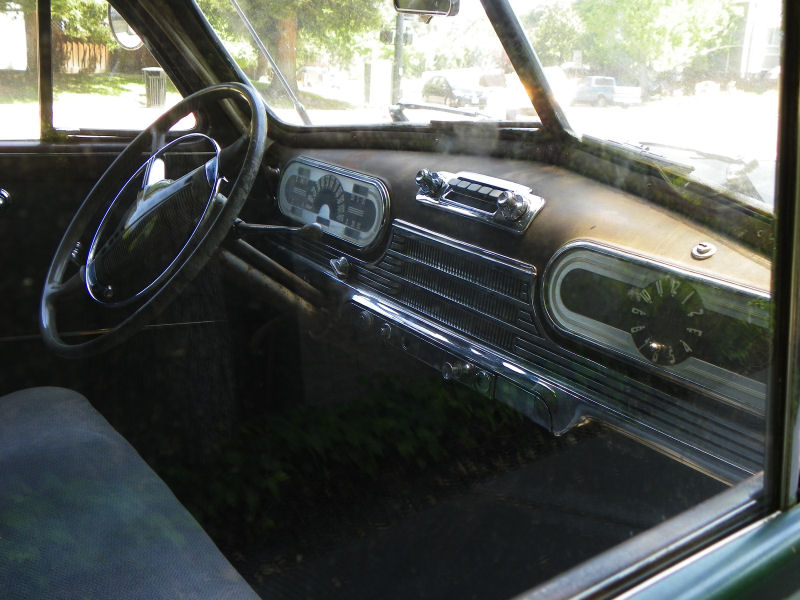 This car has the optional Hydra-Matic four-speed automatic transmission, 257 cubic inch straight-eight engine, DeLuxe AM radio and electric clock. Paint looks like what's left of the original Ivy Green with contrasting Chariot Red wheels. The upholstery was redone according to the for sale sign, which described the car as a 99% original daily driver. Apart from some body damage, it looks like a pretty easy project for the right person or a nice survivor to drive as-is.

*Reader's note: I photographed this car in June 2013. Please don't ask me for owner contact info or if it's still for sale.
Posted by Jay Wollenweber at 12:00 AM