As feature vehicles go, a white minivan typically doesn't earn a second glance from me. They're just not exciting. So why did I bother to photograph this thing?
All right, yes, I admit it. This is a pretty boring subject. At first I thought it was a Japanese 'kei' van like a Daihatsu Hijet, but it had "Marathon" badges and an alphabet soup emblem on the front - the latter a common practice with Chinese vehicles. 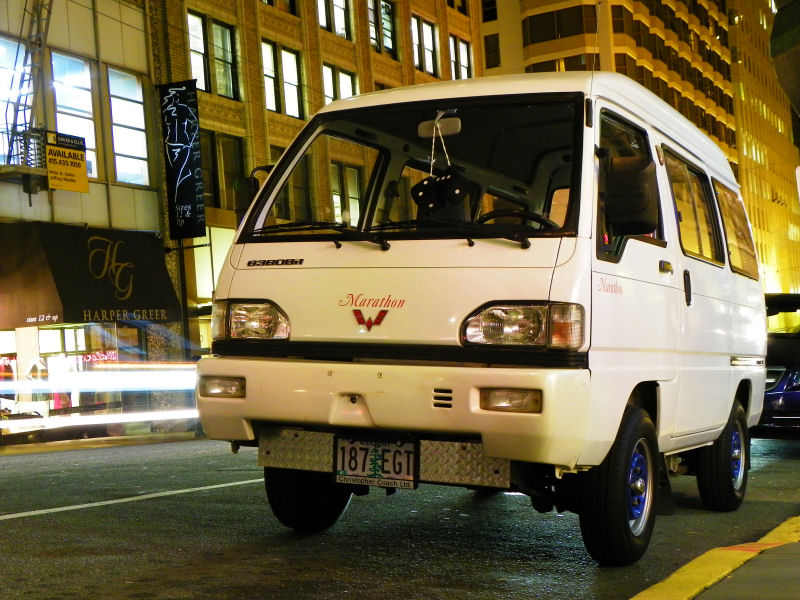 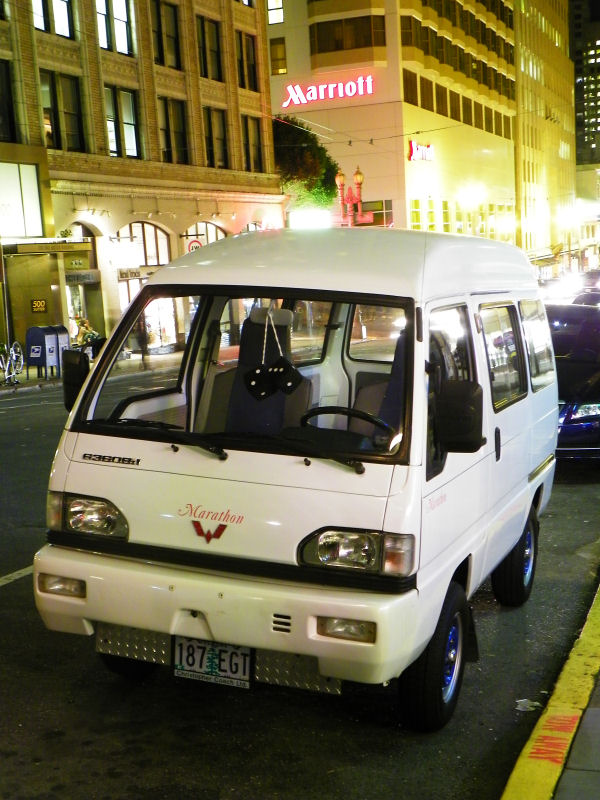 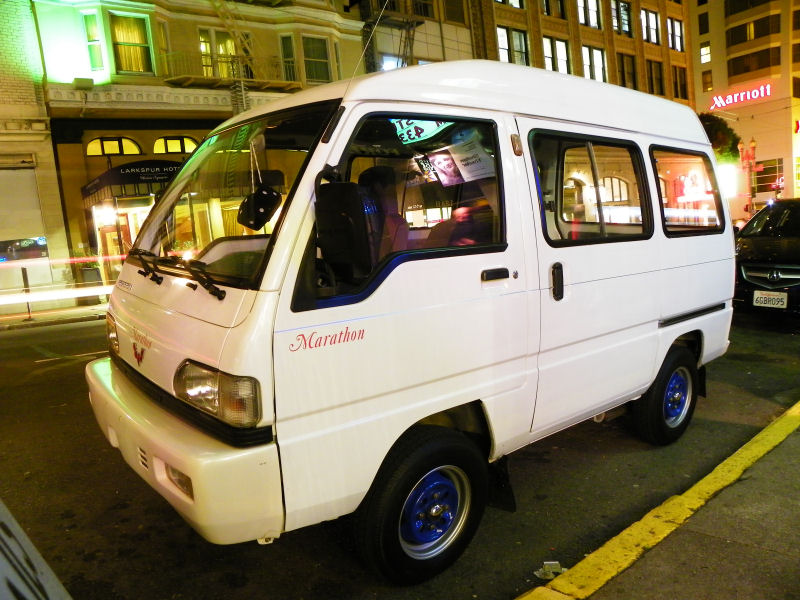 I don't know what part of the world you live in, but in the United States you don't find a whole lot of Chinese-built, Chinese-branded cars and trucks (I'm not counting anything GM built overseas). Chinese passenger cars will probably arrive on our shores sometime in the near future assuming they pass US safety standards, but for the past decade or two the only way you could get a Chinese vehicle in the US was to either buy an electric car reverse-engineered from a gas or diesel Chinese-market vehicle or buy a light truck imported via a US company like Marathon Motors. 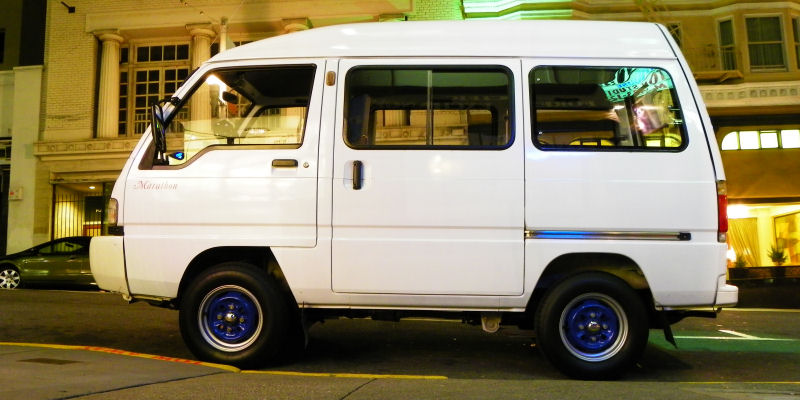 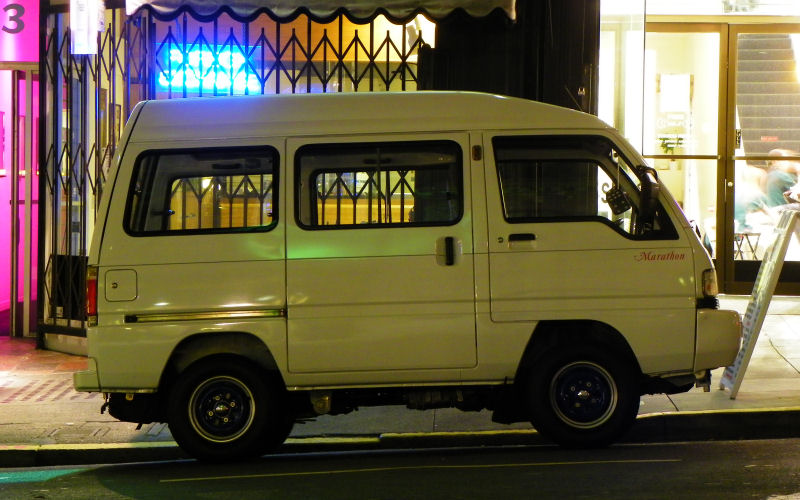 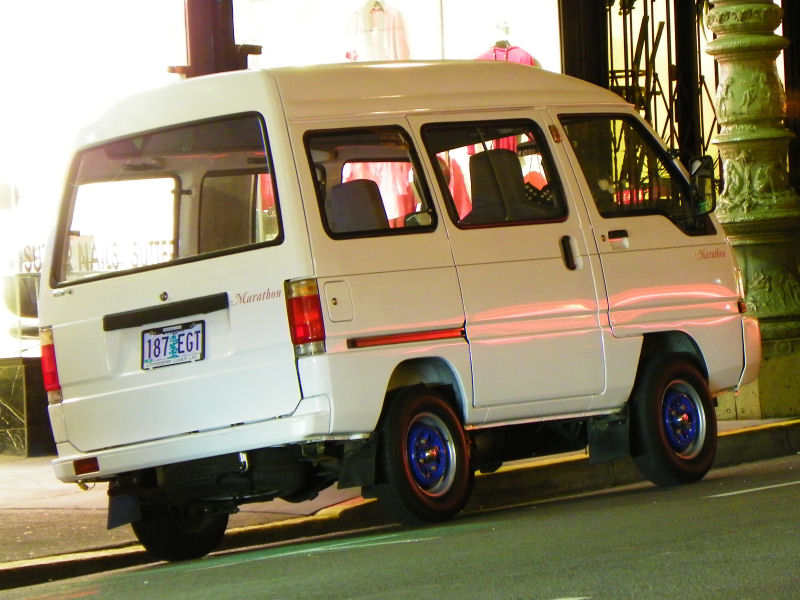 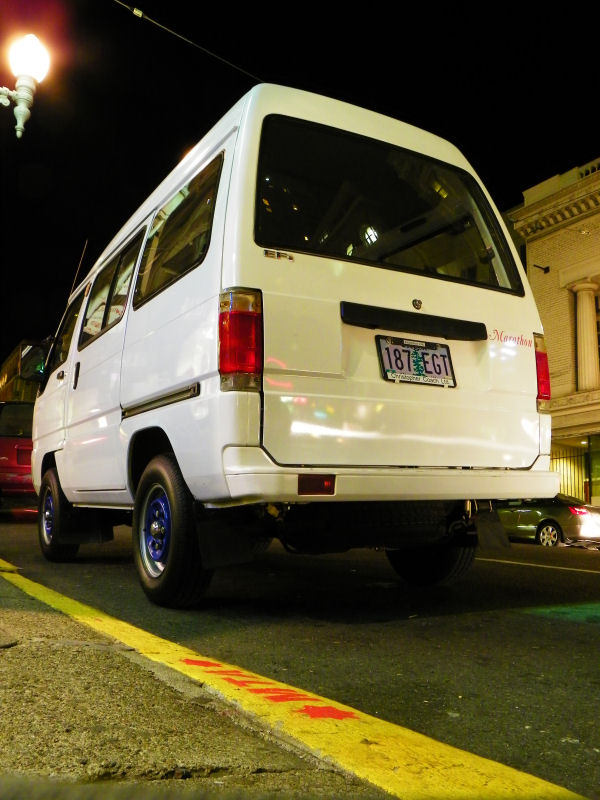 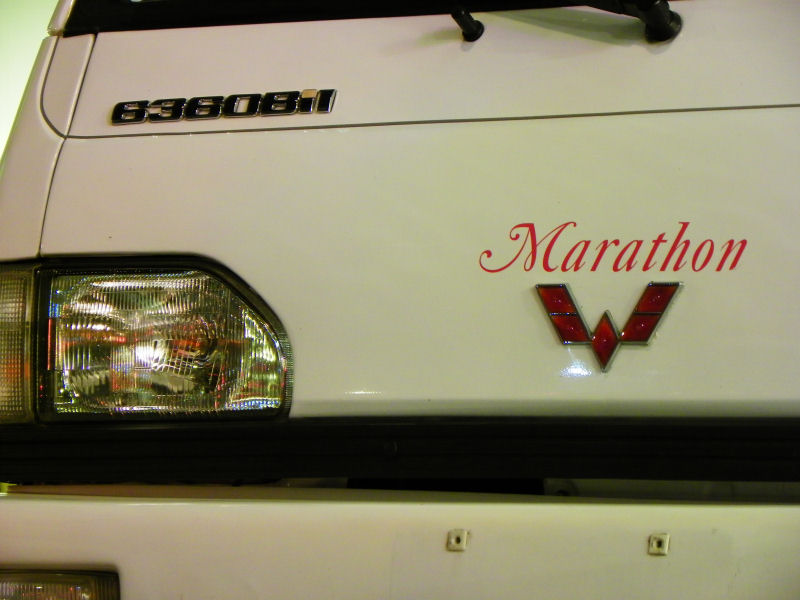 Marathon is based in Alabama and used to distribute Wuling compact pickups, cargo and passenger vans through their website, www.littlewhitetruck.com. The Wuling 6360 Dragon (marketed as the Marathon Model 1115) is sort of like the Model T of utility vehicles: cheap, simple, and available in a variety of body styles but only one color. It's powered by a 0.8 liter four cylinder producing 38.8 horsepower, and weighs under 1800 lbs. The design is based on the Mitsubishi Minicab. You tend to see little trucks like this in parks and on college campuses where they can be driven on footpaths. Note the lack of interior trim on this van and the plain, basic seats. It doesn't look like something one would want to take a long trip in, yet this example has Oregon plates. So it had to drive about 300 miles to get down to San Francisco.
Despite being very small and very narrow and very slow, this van is also very tall so it probably can carry a lot of cargo to help offset its center of gravity when a crosswind threatens to blow it over. You don't want to crash in something like this. No airbags, a seating position on top of the front wheels and probably very little structural rigidity makes an accident a frightening prospect, especially with seven people aboard.
The owners seem to have tried to look on the bright side, cheering up their little motorized appliance with blue wheels and a pair of fuzzy dice hanging from the rearview mirror. I don't suppose there's much point in commenting on its condition since it's not very old. If there's one thing I find interesting about this vehicle, it's that it has a locking fuel door that requires a key to open it, not unlike my 1985 Pontiac 6000 STE. I don't see that kind of thing anymore.
At any rate, this van gave me an opportunity to get practice taking impromptu long-exposure night shots in an urban environment. I'm satisfied with them, and I'd like to feature more cars in the future that were photographed at night.
Posted by Jay Wollenweber at 3:43 PM