I have a reaction toward many pre-1955 General Motors cars that couldn't be called "love-hate". It's more of a "like-don't care" relationship. It's easy to accuse me of being a classic car snob because of statements like that, and perhaps you'd be right, so allow me to qualify my statement. Pre-1955 GM sedans and convertibles often appear much taller and stodgier than the all-new '55s, led by the standout Chevrolet Bel Air as the mainstream styling leader complete with its new small-block V8 engine. In 1949, GM finally replaced their pre-war designs with a plethora of brand-new cars. Since all they had to work with in the regular brands were old six- and eight-cylinder engines, styling was important to their success. It was GM's goal to be the styling leader of the Big Three and fight against the relatively dull but reliable straight-six Dodges and Plymouths and quick flathead V8-powered bulletnose Fords and slick Mercurys for sales superiority.
The 1949 GM bodies continued with gradual design improvements and styling changes until 1954. Some of these changes were made only to keep the car fresh and tell customers that it was a different model year. I like the look of the 1951 and '52 Chevys, for example, as well as the '54. I am largely apathetic toward the '49-50 and '53. It's nothing personal, I just don't care for their grille designs. But here I go talking about Chevy again. As you probably gathered already, this car is a Pontiac. 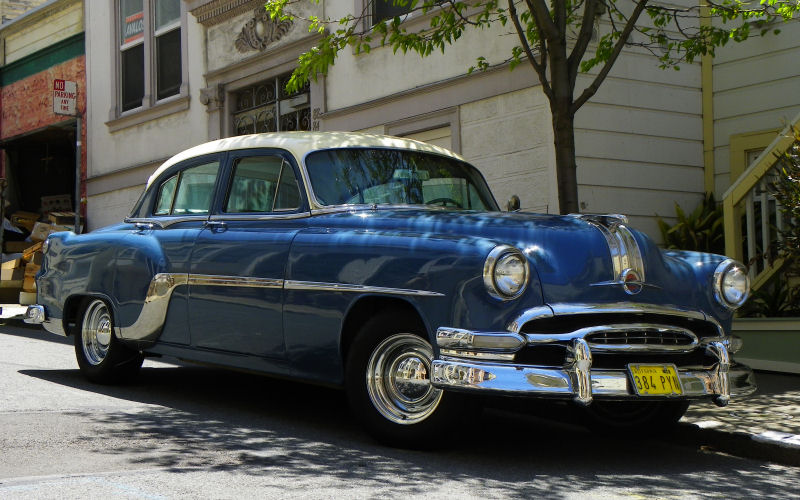 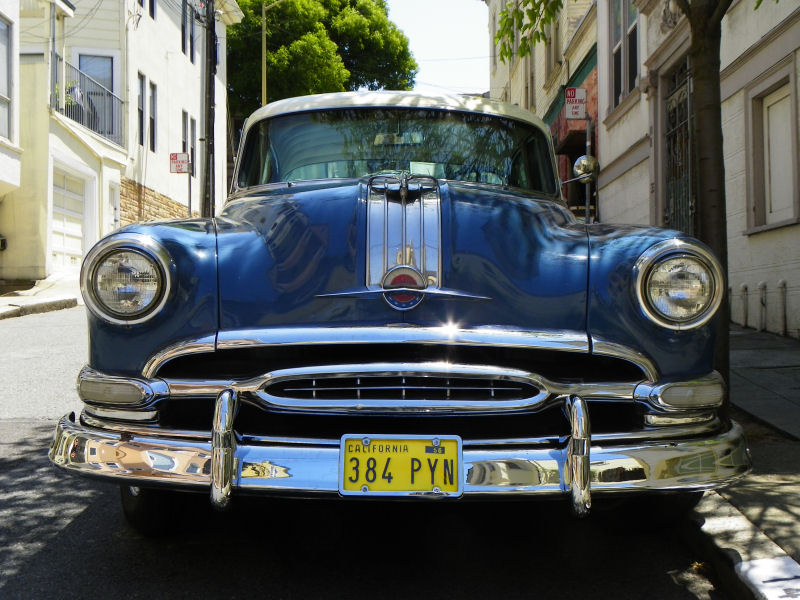 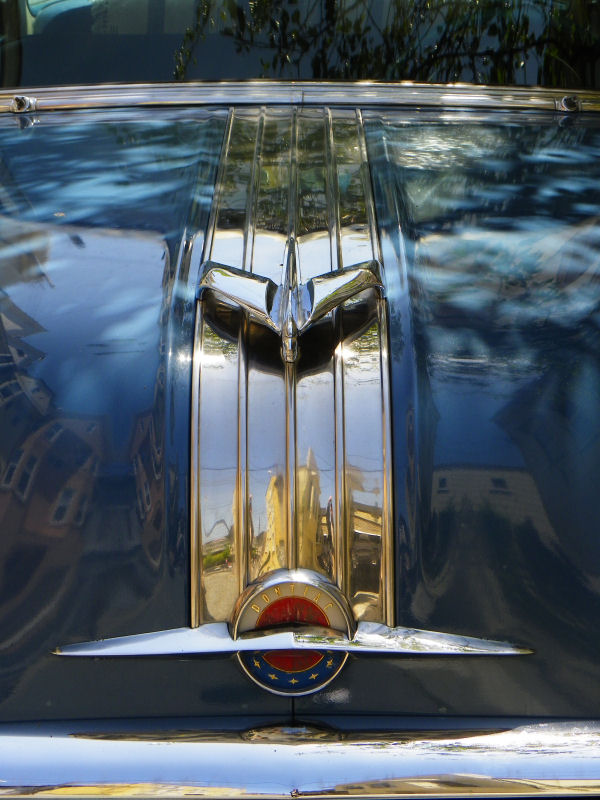 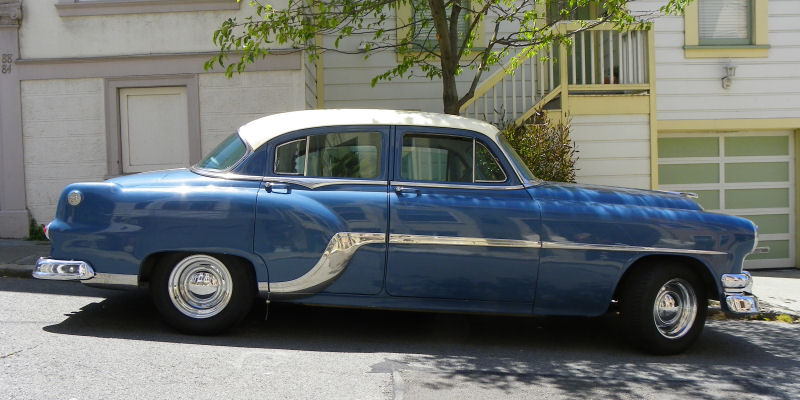 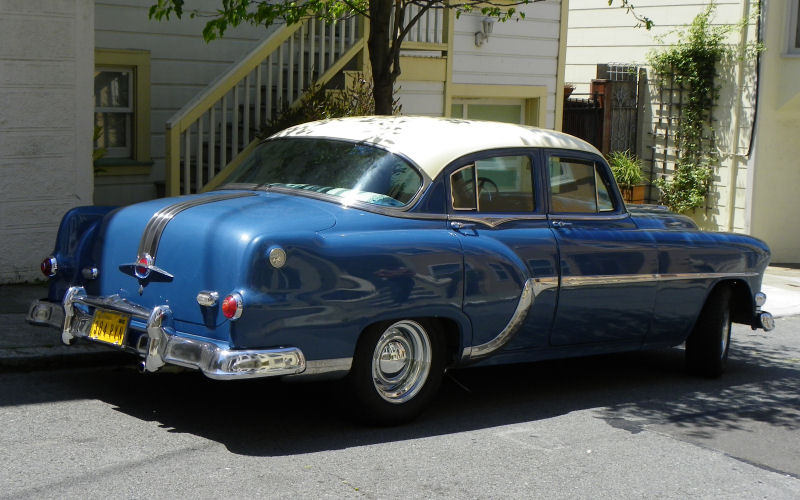 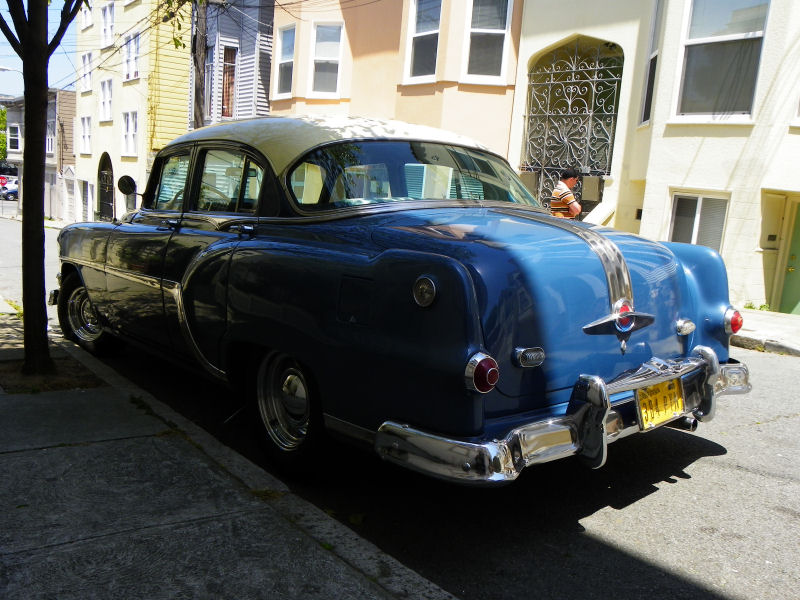 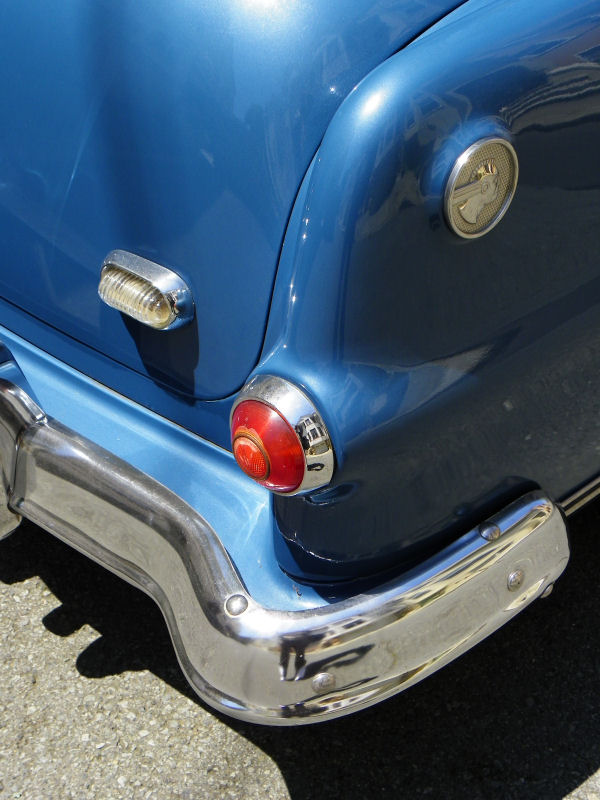 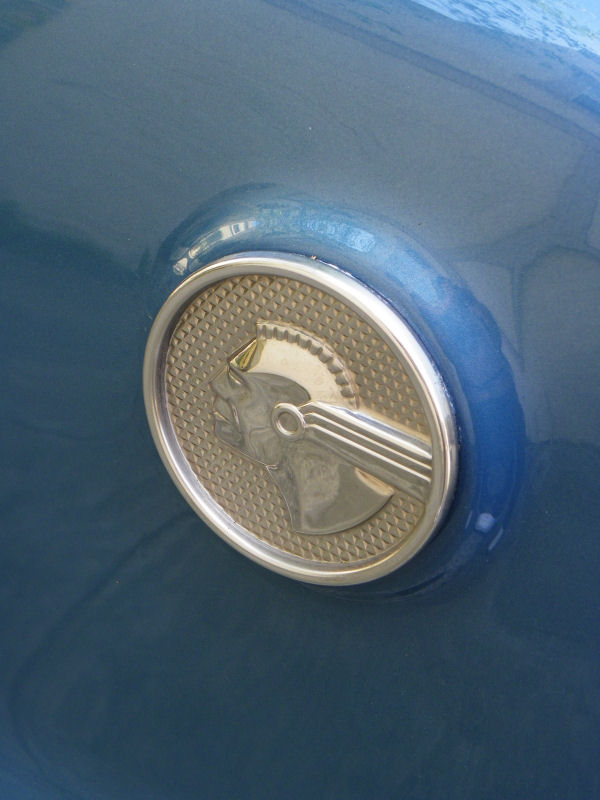 Pontiac was positioned as a low-priced brand in the '50s, and Chieftain was their base model in 1954. Its Chevy roots are evident in the body shape, with little tailfin bumps (introduced in '53) serving to set it apart from contemporary Chevys and earlier Pontiacs. The '49 Pontiacs were relatively clean and inoffensively styled cars, with a simple grille design centered around a small red circle with a profile of Chief Pontiac. Over the years, the grilles became more complex but the center badge remained, until 1954 when the grille bar design was thrown out completely and replaced with an oblong chrome shape and wraparound turn signals on the corners. All Pontiacs of this era wore bright stainless steel trim on their hoods and trunks in keeping with the optimistic "Silver Streak" motif introduced in the 1930s. Unlike the entry-level Chevys, Pontiacs could be had with either a straight-six or a flathead straight-eight; I'd venture that this one is probably a six owing to the mid-range trim level and single exhaust tip. Fancier Star Chiefs had more chrome detailing and three four-pointed chrome stars on the outside of each tail fin in place of the embossed chief's head emblems. The Star Chief also would have an amber-colored translucent plastic Indian head hood ornament insert where on this Chieftain the entire ornament is steel. Interestingly, the "Silver Streak" down the middle of this car has been left as bare stainless; on many examples the spaces between each rib are painted body color. Perhaps this is to suit the taste of the young man who owns the car and who may have restored it himself. I'm not sure if it was an option to have them painted. The "baby moon" hubcaps are a custom touch, as are the curb feelers. The license plates, while possibly a legitimate registration, do not look like original period California plates and are most likely replicas.
Since the owner was present and kindly allowed me to photograph his baby, I didn't want to spend too much time poring over it, but there are very few defects that I could find. The taillight lenses are starting to discolor, but if they're original pieces then they've had impressive longevity. The paint job (San Marino Blue with Winter White roof) looks relatively fresh and displays well, and the body looks very straight with no visible rust and all trim present and intact. The door mirror appears to be an addition, which doesn't surprise me. On many cars of this era, you didn't get side mirrors as a standard feature; this car may not have been ordered with one originally.
As a Pontiac owner and enthusiast myself, it makes me happy to see someone enjoying a classic Pontiac, even if it isn't a rip-snorting GTO or Firebird. You don't always have to go fast to appreciate a cool car. Just get in and cruise.
Posted by Jay Wollenweber at 1:03 PM