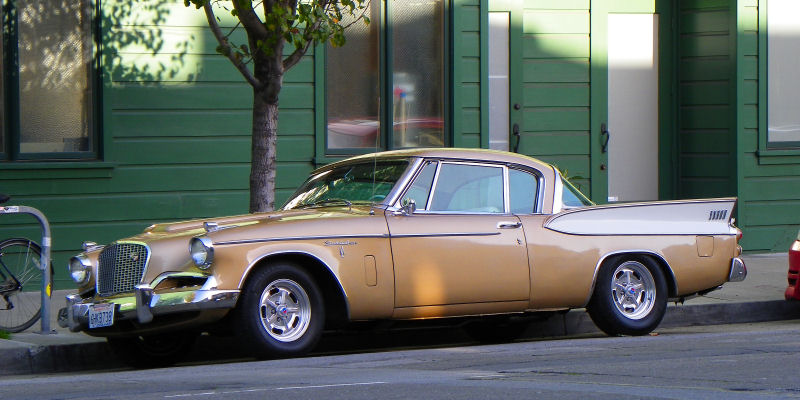 Seeing an off-brand classic car on the street always brightens up my day, especially when it's something special like this. It's a 1957 Studebaker Golden Hawk, top of the Hawk line and pretty much the closest thing to a sports car to come out of South Bend, Indiana that year. This Golden Hawk packs a supercharged 289 cubic inch V8 producing 275 horsepower, no slouch by '50s standards, and darned quick in such a lightweight body.

Read more »
Posted by Jay Wollenweber at 1:06 AM No comments:

Last in the series is Chrysler, represented by this 1968 Plymouth Fury III Sport Suburban. I've never been lucky at finding feature-worthy cars in the Montclair district of Oakland, but this big old Fury fit the bill. I've seen it a number of times parked in the same spot, but it certainly moves under its own power and drives. 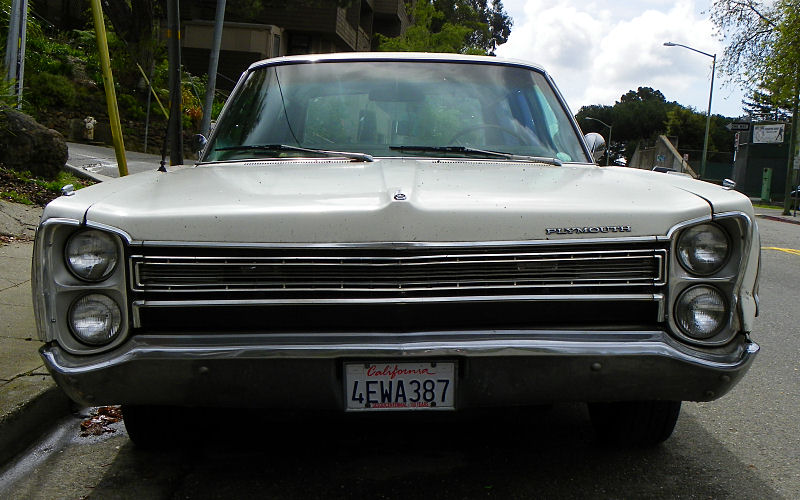 Second in the series is General Motors, represented by a much more compact interpretation of the wagon. This is a 1972 Chevrolet Vega 2300 GT Kammback. The Vega was supposed to be a revolutionary small car for Chevy, intended to take on the slow and/or crappy domestic compacts and their equally slow but slightly less crappy imported competitors. The Vega should have been a resounding success with its aluminum-block 4-cylinder engine, but instead it failed as miserably as the unprotected aluminum cylinder walls, blown head gaskets and rusting fenders that plagued it. 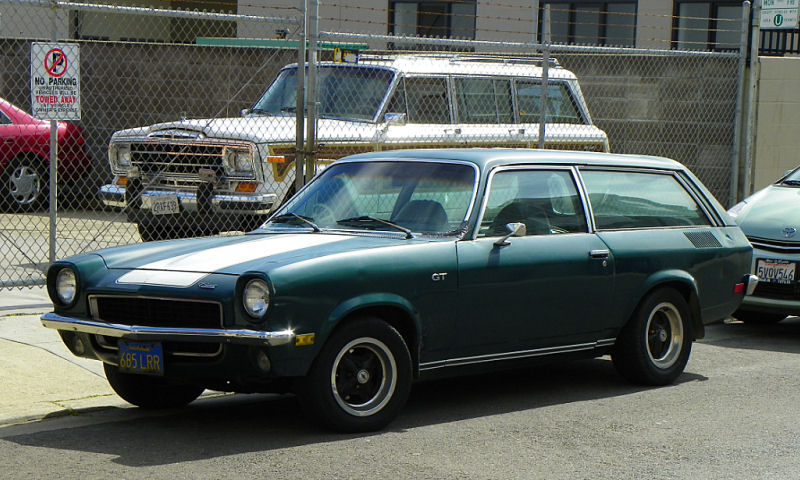 For starters, let's look at Ford's offering. This 1966 Country Sedan was one of their larger cars during the era, based on the full-size Galaxie. I've featured a Country Sedan before, but it was a 1963 model and in much worse condition. Interestingly, while reading up on this car I learned that the Country Sedan and its faux-wood-paneled twin, the Country Squire, were sold as their own respective models until 1969, when they were ultimately lumped together in the Galaxie line. 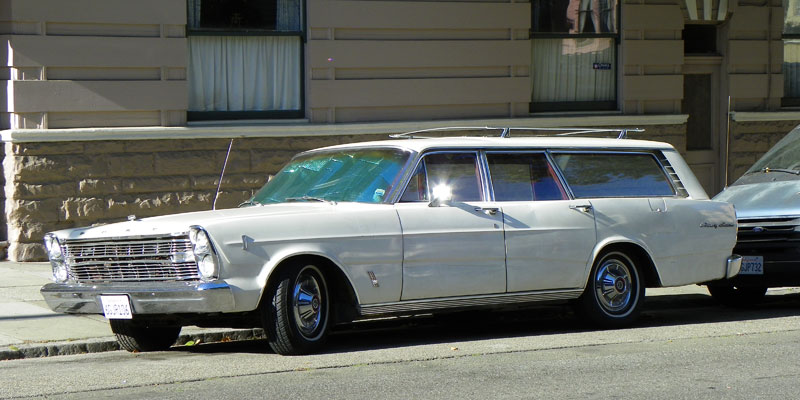 Read more »
Posted by Jay Wollenweber at 3:54 AM 3 comments: 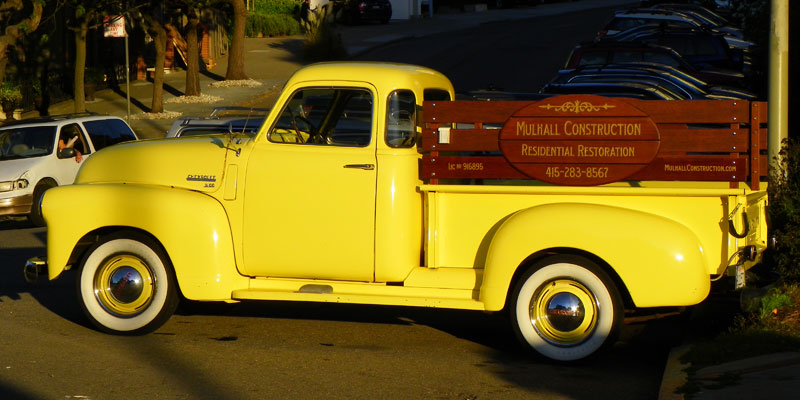 I've always been a big fan of the 1947-53 Chevrolet Advance Design series pickups, and this is one of my favorite examples. It's a 1950 Chevy 3100 pickup in a lovely canary yellow with stained wooden bed extenders emblazoned with the logo of a San Francisco home renovation company. From about 20 feet away, this truck looks darn near brand new. Up close, there are a few blemishes here and there, most noticeably the well-worn steering wheel which is likely original. The body is straight; the chrome is in good shape though it could use some polishing to get rid of a small amount of surface rust in a few places. The paint job looks recent, the wood bed is clean and undamaged, and the Firestone wide whitewall tires with painted steelies and chrome hubcaps and trim rings really set it off. 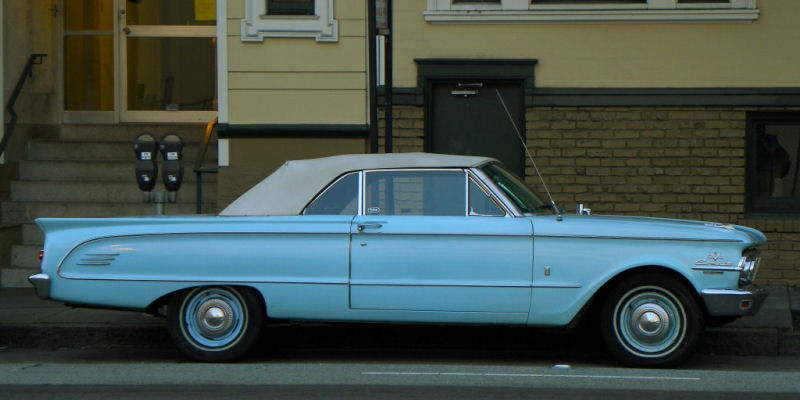 I don't know what it is about Falcons that keeps me coming back to them. They aren't particularly exciting, aren't revolutionary in their design or engineering, and are still plentiful on the roads. Perhaps what I like about the Falcon is its honesty, with a general lack of gingerbread and a rugged simplicity built to meet the needs of those who wanted economical family transportation in a compact package. The earliest Falcons were only about half a foot longer than a modern Focus sedan, slightly wider and actually weighed less. My first experience with a Falcon was a ride in a blue 1964 Futura convertible once owned by a friend of my dad.
So you get it now. I like Falcons.

Read more »
Posted by Jay Wollenweber at 2:39 AM No comments: 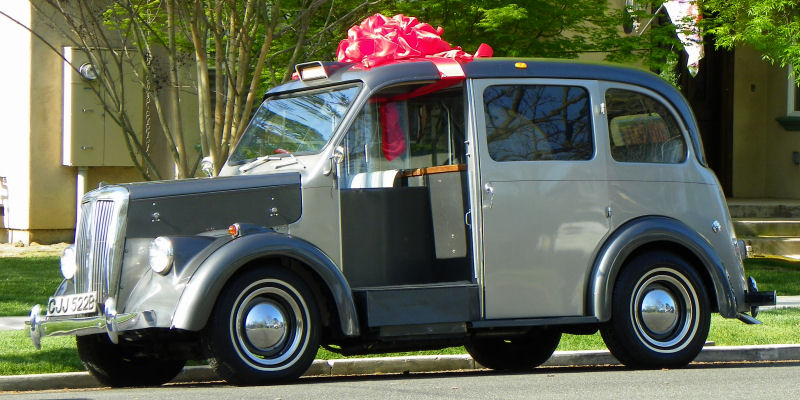 Readers of this blog will notice that I feature American cars much more often than anything else, because most old cars in California are domestic. Imports have always been popular here, more so than in most states, but they didn't take over until around the '80s or so. Most of those imports were German or Japanese, and a sizeable number came from the UK. Most cars from the UK are British though, with only a relative few coming from other parts of the Kingdom. Since I haven't yet seen a Northern Ireland-built DeLorean parked on the street, we'll have to settle for something even more unusual and rare, but British-built, a 1959 Beardmore Paramount Mark VII London Taxi. 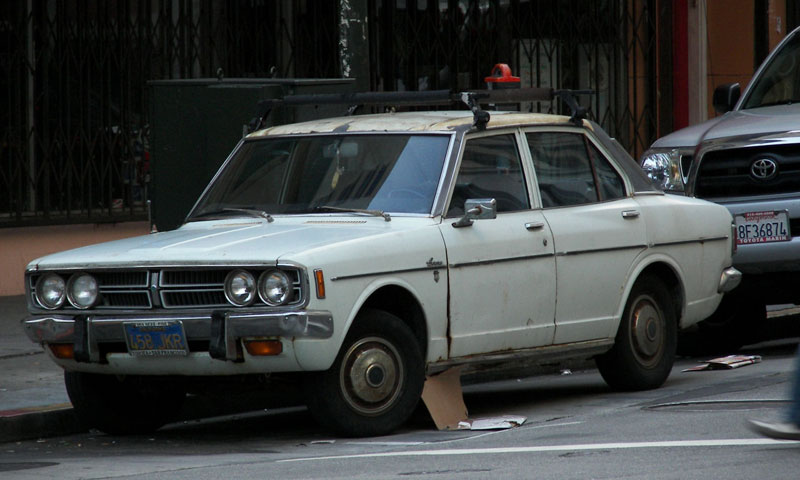 Last year I featured a 1974 Toyota Corona as my first Japanese "Street Sighting". Some time after that, I photographed another old Corona with a similar body but a different front end. It took a fair amount of Googling to determine what year this second car was, but the oddly Dodgelike crossbar grille turned out to be a 1973 Corona Deluxe. 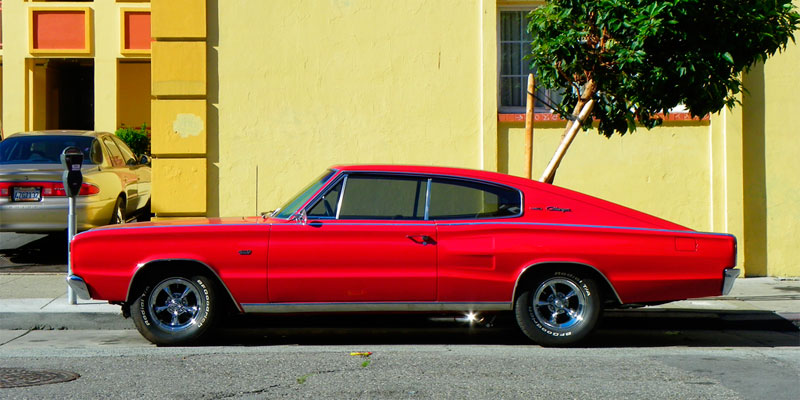 It seems fitting to me to start the second hundred features of this blog with a notable first. So, today we look at the greatest iteration of a first-year model, the 1966 Dodge Charger equipped with the 426 cubic inch "Hemi" V8 engine.

Read more »
Posted by Jay Wollenweber at 5:28 AM No comments: