As a boy growing up in the 1990s, I had my share of supercar posters. Porsche 993, Ferrari F355. I collected models of my favorites as well, some of the more stratified exotics. Ferrari F50, Jaguar XJ220, Dodge Viper RT/10. But few came close to the Lamborghini Diablo in terms of insane performance, instant name recognition and sheer curb presence. It was to the schoolboy of the '90s what its older brother, the Countach, was to the kids of the '80s. 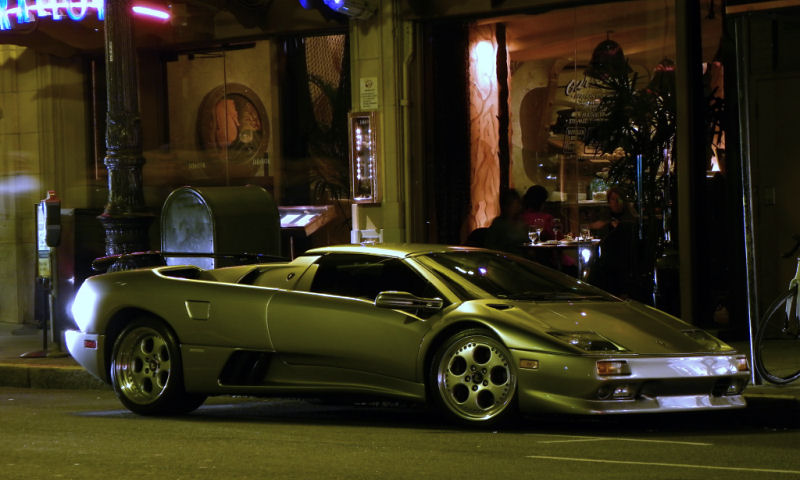 Some time ago I put up a poll asking readers for input regarding cars photographed near, but not in, car shows. Most respondents said that any car parked on the street is fair game. Now, I could easily cheat and photograph every old car I see parked near the county fairgrounds when the Goodguys Rod & Custom Association puts on a show. Lots of people bring out their cars but are reluctant to pay Goodguys' entry fee to show their vehicles within the fairground gates. But likewise, I've long been reluctant to call those "street sightings" even though they technically are. Readers can expect to see more cars like this in the future, photographed near (but not in) car shows. To avoid diluting my collection of "legit" sightings, I'm figuring on limiting features like this to no more than one per month. Enjoy! 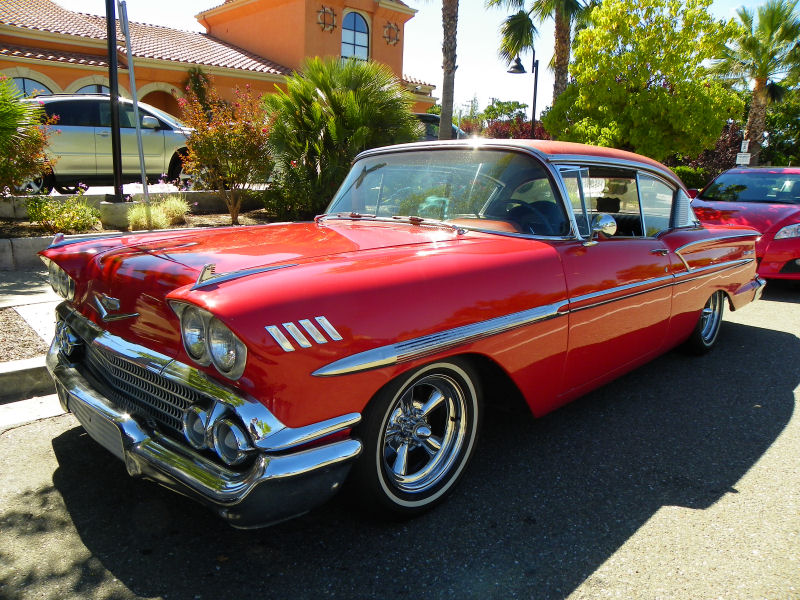 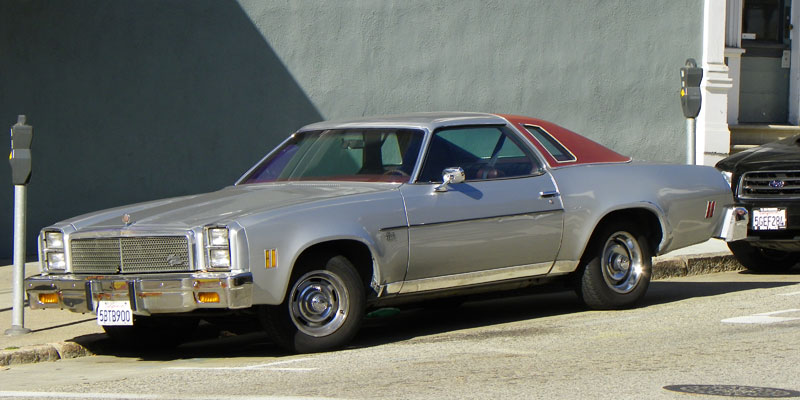 In modern times, Chevrolet has played fast and loose with the word "classic" in its model names. Anything with the word "Classic" in its name now effectively means an obsolete model held over for another year either to ease the entry of a controversial new model or to simply move last year's old inventory. Case in point, the 2004-05 Chevy Classic, which was a carryover 1997-2003 Malibu with "CLASSIC" on the trunk lid in place of the Malibu badge. It was sold primarily to rental fleets while the awkwardly-designed 2004 Malibu took over.
There was a time when Malibu Classic meant something, and the mid-1970s were that time. Chevy's Chevelle coupe lineup had received a new "Colonnade" design language for 1973, with the Malibu making up the mid-level trim model and the new Laguna took the top luxury spot. In 1974 the Malibu Classic was introduced, sporting luxury touches not found on regular Malibus. In 1976, the Classic was given four stacked rectangular headlights and a new diamond-pattern grille in place of the plain horizontal grille bars and dated single round lights of the base car. Also part of the Classic package was a hood ornament; the vinyl landau top was apparently optional. This car rides on Chevy Rally wheels that, as far as I know, were not stock on the Malibu Classic that year but are a popular (and if I might say so, good-looking) add-on.

Flickr has proven itself to be a valuable resource for locating interesting cars. Often, going in search of one (or several) vehicles results in finding none of the ones I planned for, yet finding something entirely different. In this case, my search for an early-'60s Pontiac yielded instead an early-'60s Volvo, more specifically a circa-1964 Volvo PV544 (and eagle-eyed readers will notice that it took two visits to get all the pictures for this feature). 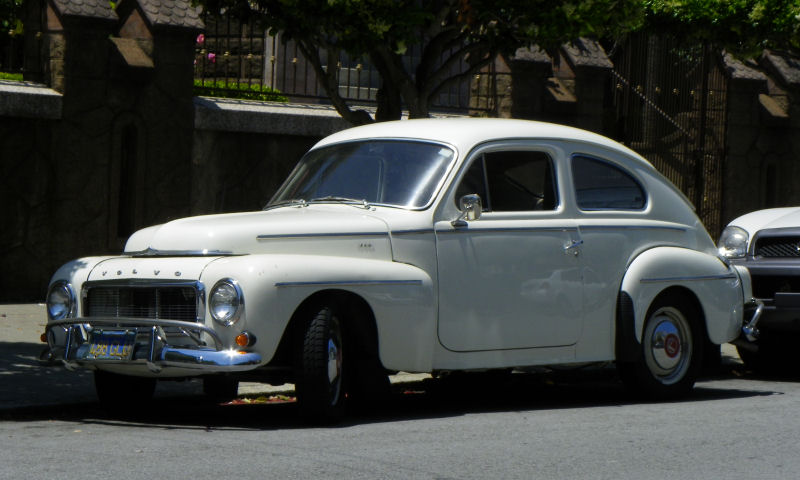 Read more »
Posted by Jay Wollenweber at 12:10 AM No comments:

I've thus far been fortunate to come across not one but three Citroën DSs in San Francisco. Of those, I've been able to photograph two of them in depth. The first was the grey 1970 DS21 I spotted in the Lower Haight, another was a clean black example I caught driving in the east Mission near Potrero Hill (only got one or two shots of that while it was stopped in traffic). And then there was this one, found near the famous twists of Lombard Street on Russian Hill. 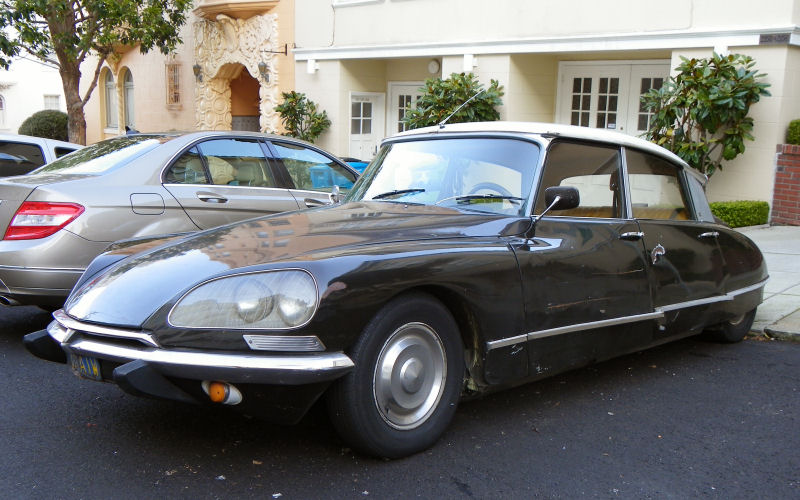 Rounding out 1970s Economy Cars week is this 1974-75 Chevrolet Vega 2300 hatchback. It was GM's effort to beat the Japanese at their own game, building a practical, affordable domestic compact with a plethora of body configurations and a lightweight aluminum engine block. The engine was the car's main stumbling block, since its lack of steel cylinder wall sleeves (an $8 per car savings) allowed piston motion and heat to ruin the engine. According to GM engineers, the culprits were brittle valve stem seals and an undersized radiator which, if the owner ignored his fluid levels, together could let coolant and oil run low and make the engine overheat, penetrate the head gasket with antifreeze and cause the pistons to scuff the cylinder walls all to crap. The early cars simply weren't tested for owner neglect and the Vega was designed too quickly and too cheaply to correct everything before production time. The subsequent flood of warranty repair claims cost GM millions. The engine problem was rectified later, as were many other problems, but the Vega never lost its tarnished reputation and was later replaced by the nearly-identical Monza in 1978. The attractive miniature-Camaro styling introduced in 1971 was updated in 1974 to make the car more current, compensating both for the fact that the Feds mandated gigantic 5-mph bumpers and the fact that the Camaro had also been restyled. Still available were the Vega 2-door sedan, 2-door hatchback, Kammback 2-door wagon, and a sedan delivery with blank window panels. 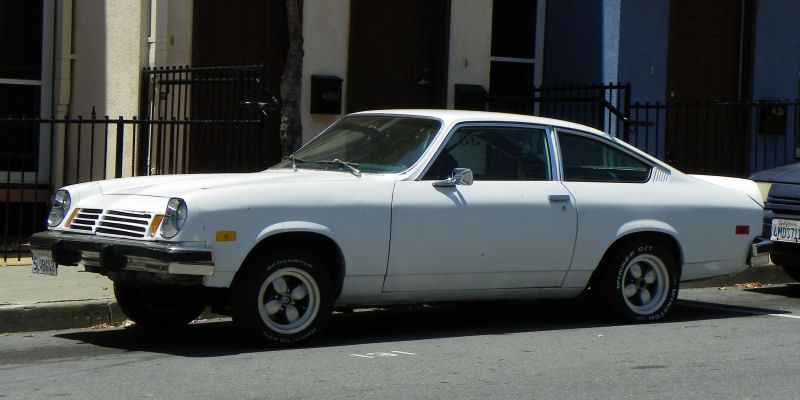 Coming from the other end of the spectrum from yesterday's immaculate 1970 Toyota Corona is this 1973 AMC Gremlin. American Motors products are becoming scarce in San Francisco, and this is arguably the saddest one in town. The Gremlin was a comedy of errors that was rumored to have been penned by Richard Teague on an air-sickness bag while on a flight, was named after a troublesome creature that sabotages machinery, and was introduced to the public on April Fools Day, 1970. It was created by cutting all the useful space out of a Hornet coupe, marketed as an economy car, and then offered with a V8 and sporty option packages for a wonderful mixed message, none of which really made sense. That's probably why the Gremmie is so universally panned by critics, and precisely why I love it. 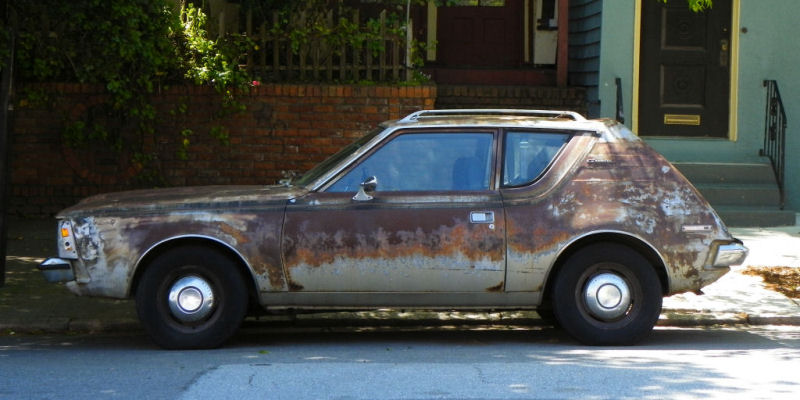 I've come to respect a number of old economy cars, some of which are maligned for being terrible even if that reputation is undeserved. This week we're looking at cheap cars of the 1970s. 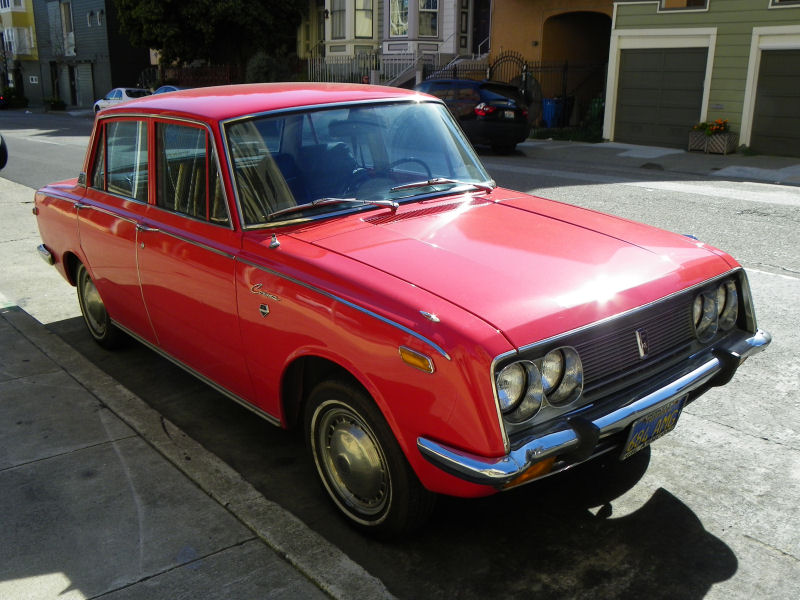 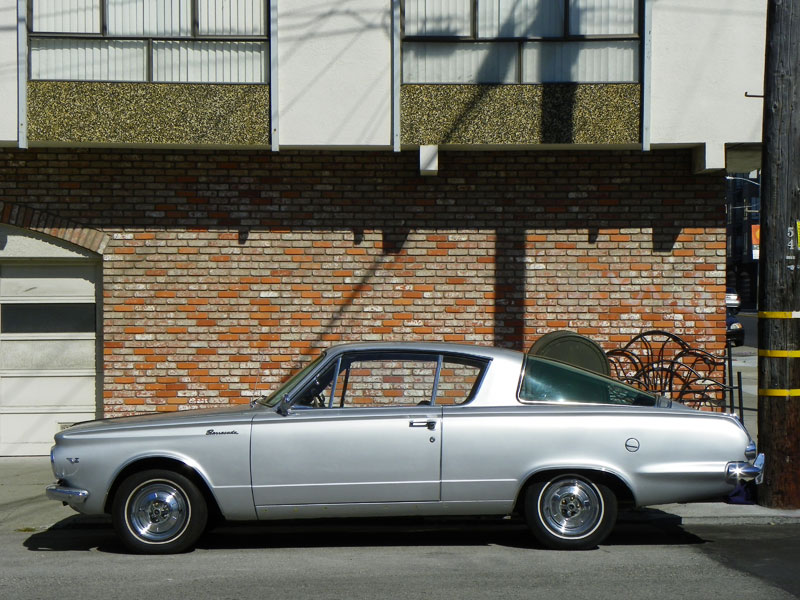 This one broke my heart when I saw it. I've become a big fan of the 1965 Plymouth Barracuda, with its sporty profile, big wraparound rear window, and underdog ponycar status. So naturally I got excited when I ran across this lovely silver fastback while in the city with my dad. A near-immaculate 273 V8 car with black Formula S styled racing stripes and mag wheels, how can you lose? I got out of the car and photographed it. Then I got around to the passenger side...

Carrying a camera around the same city for years can be a blessing and a curse. You see all kinds of cool stuff, but you also see that stuff age. When I first saw this 1984 Peugeot 505, it was one of the cleanest and shiniest examples I'd seen. Four years later, it's baked all over. I suppose I shouldn't be surprised. The same thing happened to my 1985 Pontiac 6000 STE after it was parked outside for years, washed rarely, and not waxed. Cars look great under the California sun, but the sun does not like them! 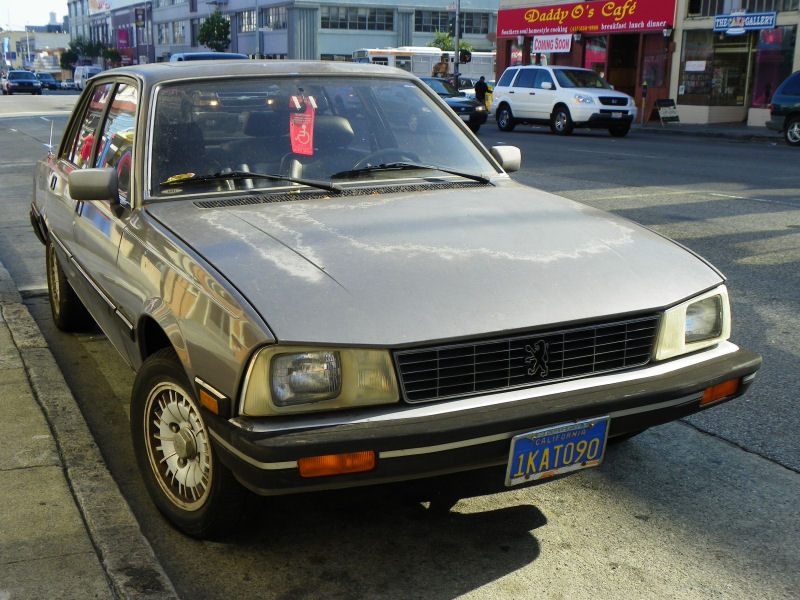 When searching for interesting old cars on the streets, I love finding obscure makes and models. But if I can't find an obscure brand, I'll settle for an oddball model from a well-known make. So I hit the jackpot when I ran across a collection of Chevy Corvairs, the only mass-produced rear-engined, air-cooled American car. For now I'll be focusing on the oldest, a 1963 Monza 900 coupe. It's the third Corvair I've featured, and the second Monza. 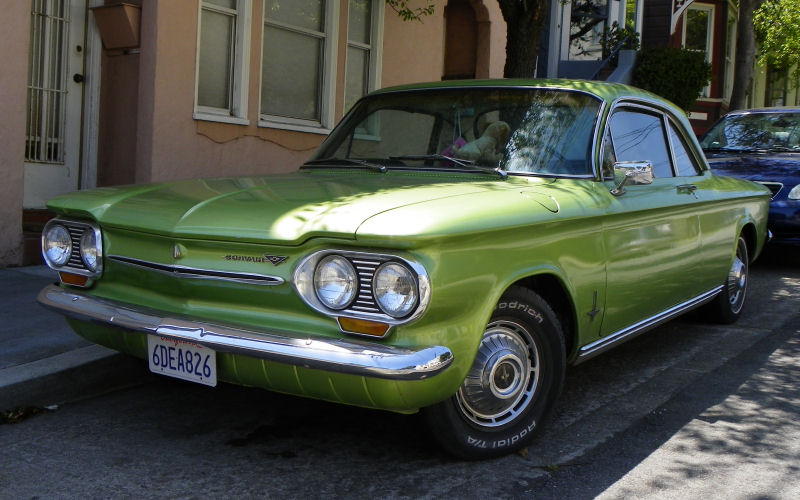 It takes a special combination to make me feature an old pickup truck. Many of them have wonderful stories to tell in all their scratches and dents, of fishing trips and construction jobs. Or the time they overheated and the owner kicked the fender in frustration. At the same time, though, I also factor in the vehicle's age, rarity and whether it's in good shape or has interesting patina. And while it seems like every other vintage custom truck out there is a 1956 Ford F-100 -- they have a cult following in the hot-rodding community -- I see very few unrestored stock examples - especially the much rarer long-bed variety. 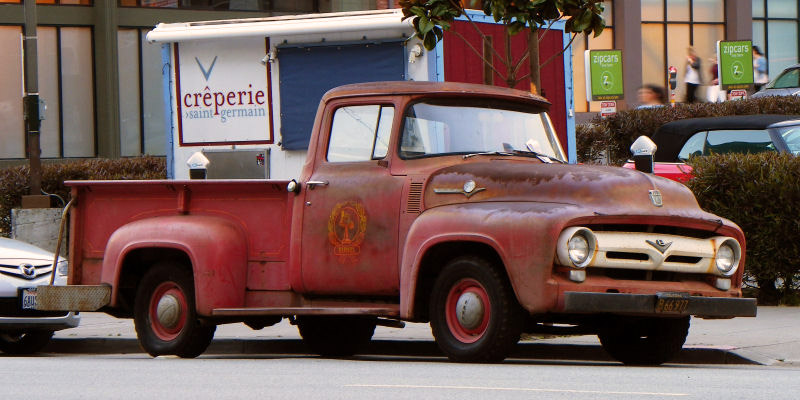 Of all my street sightings, this is probably the one that I most regret not shooting more in-depth. The reason I didn't, is because it was before I even thought about starting a blog about cars I found on the streets. In fact, there were two reasons why I shot this car at all. One of my hobbies was posting on a car website called Rice or Not?, submitting just about every interesting vehicle I found. The other reason for shooting it was that a good friend of mine was making drivable virtual cars for the online community Second Life, and I was trying to find interesting cars that could be used for mapping textures on their 3D counterparts, using front, side, rear and close-up wheel photos.
It was only later that I decided to join Jalopnik.com, to submit some of my more interesting local street sightings to weekend editor Murilee Martin, whose "Down on the Street" features were one of the more popular elements of the site. My first "Down on the Street: Bonus Edition" submission was the Hillman Minx that I featured very early in this blog's run. When I continued to submit cars, but they weren't posted, I became discouraged and decided to strike out on my own with a car blog. 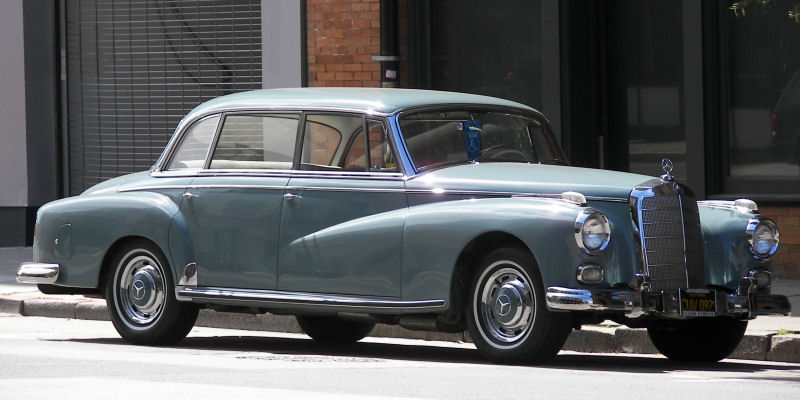 Read more »
Posted by Jay Wollenweber at 12:14 AM No comments:

By now you probably know about my affinity for the Ford Falcon, and to a lesser extent its Mercury Comet cousin. Since the Comet is rarer than the Falcon, I usually shoot just about every one I see on the street. This well-loved 1962 Comet Custom sedan was parked along one of the main drags in Santa Cruz one evening as a friend and I were leaving the famous Santa Cruz Beach Boardwalk. I parked my car and got out to snap it. 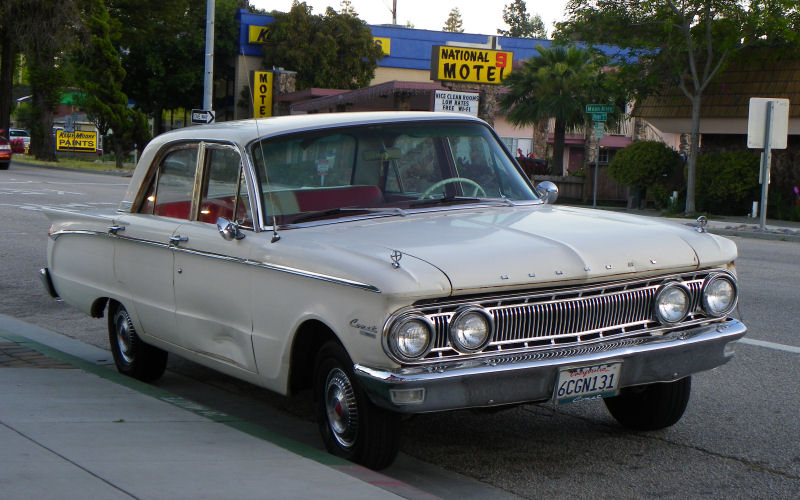 You've probably noticed that the majority of the cars featured here are 1960s and newer. Pre-1960 cars are harder to find, harder to care for, harder to get parts for, and probably less reliable than more current iron. As such, the older it gets, the less likely it is to have remained factory-stock. Certain older cars were never particularly sporty, so they lend themselves to being modified and used as cruising cars. And still others never became super-rare or valuable, so they can still be had on a budget. Case in point: this 1939 Plymouth P7 Roadking sedan in the Mission District. It appears to be a sort of low-budget hot rod or cruiser. 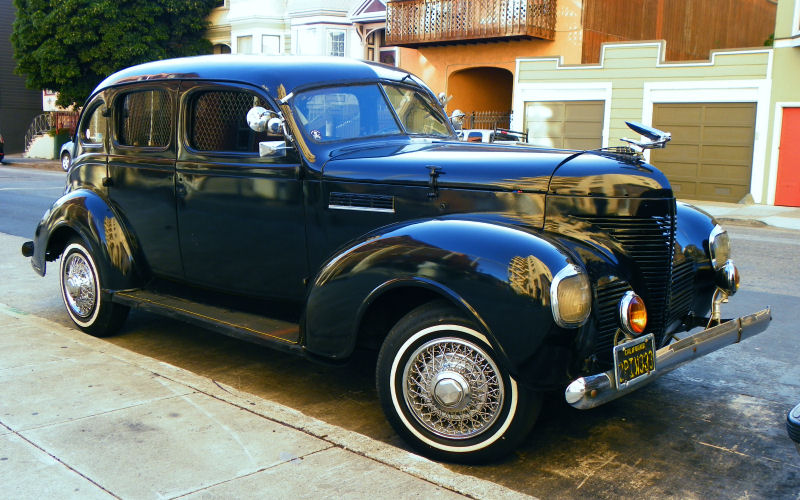 Read more »
Posted by Jay Wollenweber at 11:07 PM No comments: