Today marks the final day of another year. For the last post of a dying year, let's examine the last gasp of a dying brand. This is a 1958 Packard Hawk. 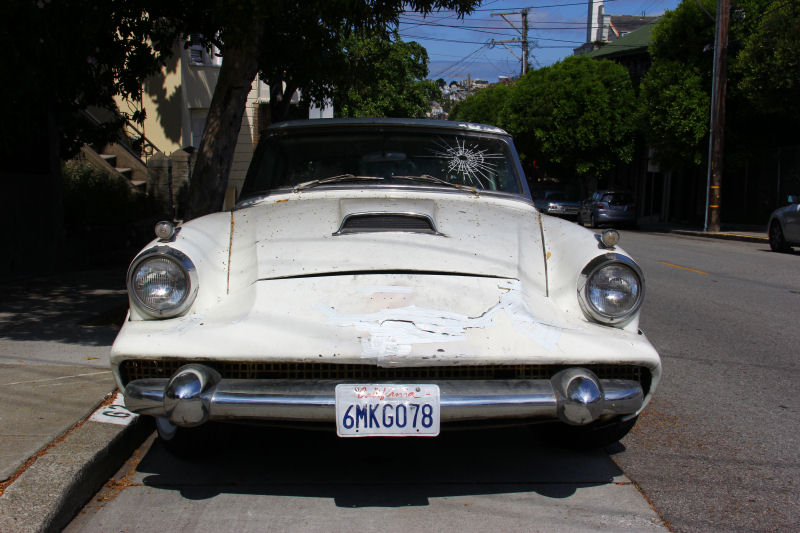 Over the last few years I've noticed a mysterious influx of German fire trucks in San Francisco. One was a Mercedes-Benz 508D which last I checked was owned by Make Magazine. Someone found an old Opel fire truck in the Sunset District and now we look at this 1962 Magirus-Deutz Mercur 125A fire pumper which hails from the same general area. 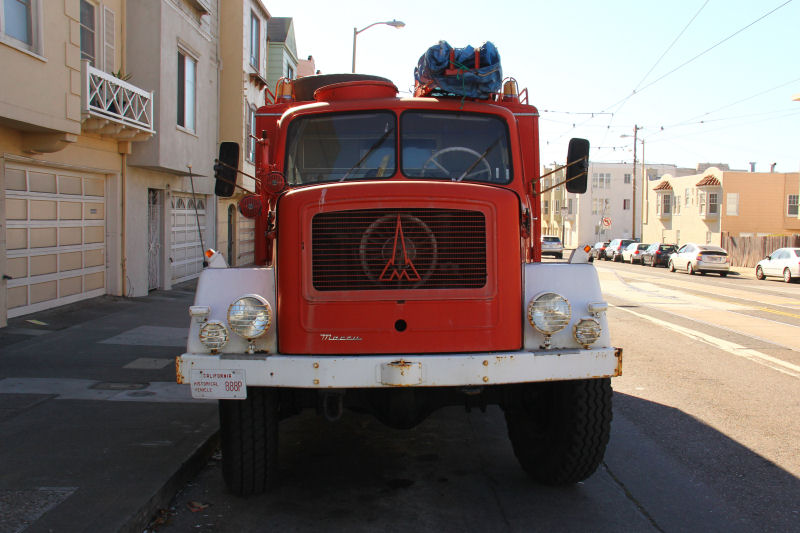 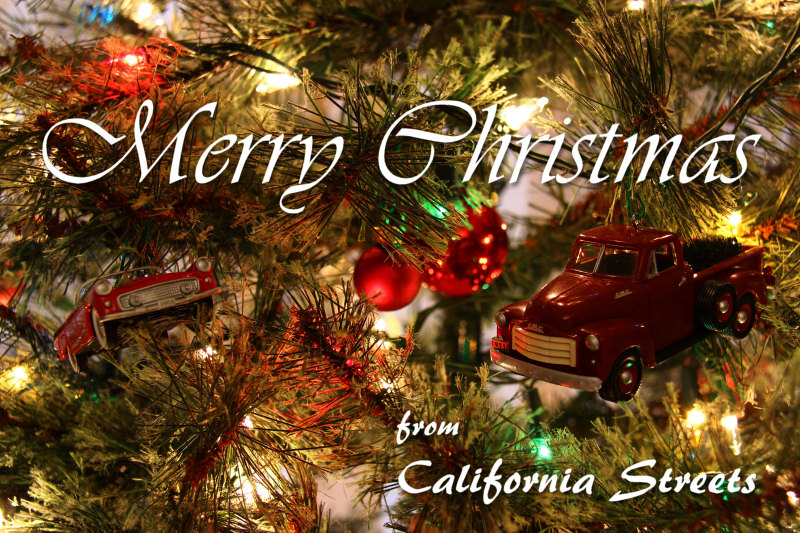 Wishing all my readers a very happy and safe holiday and a wonderful new year. 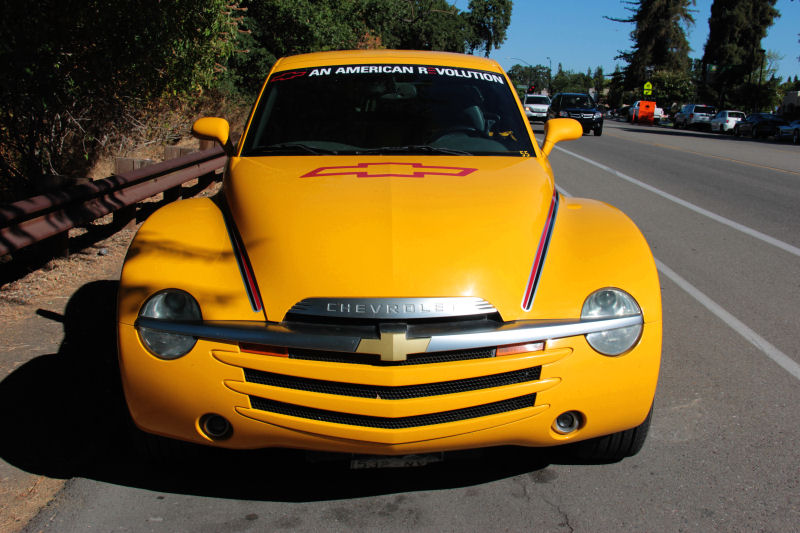 In 2002 General Motors decided to discontinue the Chevrolet Camaro and Pontiac Firebird. The F-body coupes and convertibles were popular budget sporty cars, especially among young buyers looking for rear-drive V8 power. But the body and chassis dated to 1993, the interior was hopelessly antiquated and the competition was upping their game. So what did GM build to replace them? Well, in the case of Pontiac, nothing. Pontiac had things like the Grand Prix GTP, but no sporty coupes that could truly replace the Firebird and Trans-Am in the middle years of the 2000s. Nobody thought a Sunfire or Grand Am GT was a substitute for a Trans-Am. For Chevy, though, GM was readying an all-new performance two-door. Hoping to take advantage of the retro styling craze popularized by the 2001 Chrysler PT Cruiser and 2002 Ford Thunderbird, Chevy rolled out the SSR (Super Sport Roadster).
A pickup truck.
...With a retractable hardtop.
...Patterned very loosely after the 1947-1953 Advance Design Series pickups. 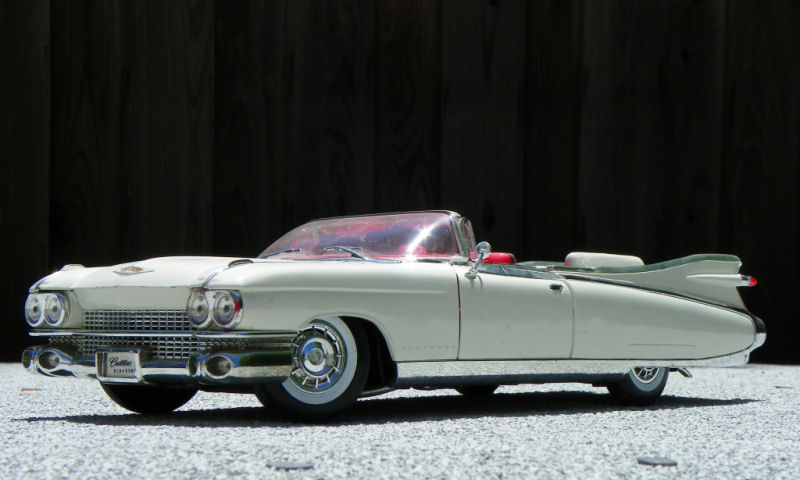 As Christmas approaches and parents flock to Costco for the $12.99 Maisto Special Edition 1:18 scale diecast models for their children, it seems appropriate to reflect on one of the Maisto models I received for Christmas as a kid. This is a 1959 Cadillac Eldorado Biarritz. 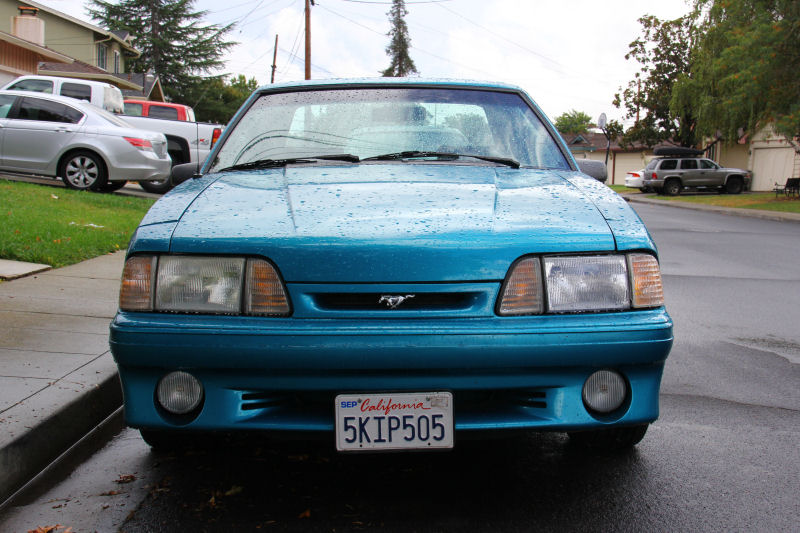 I'd like to think I have fairly high standards for feature cars here. I don't just shoot anything old. If that were the case I'd have a blog full of beat-up Chevy pickup trucks and Plymouth Valiants. It usually has to be something historically notable or at least something that tickles my fancy. For that reason I'm hesitant to go wild over a Foxbody Mustang. I have nothing against them; they're just common and kind of generic, frequently beaten to an inch of their life or tricked out by teenagers with cowl induction hoods, bling rims and custom lights. The rare special editions are hard to find and a regular LX 5.0 or GT doesn't excite me a whole lot. So that pretty much leaves the 1993 Cobra. 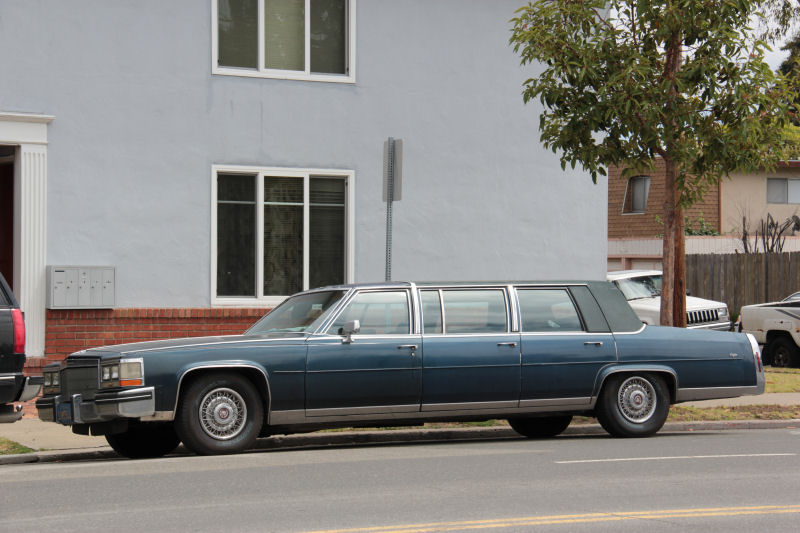 The Cadillac Fleetwood Brougham is still a relatively common sight on American roads. A longtime favorite of senior citizens, the once-expensive Brougham has been trickling down into ordinary households for decades now. The 1977-1992 Fleetwood has also been a favorite for limousine conversions. Most Fleetwood limos I've seen have been a four-door stretch, but on rare occasions a six-door surfaces. I believe most six-door limos were built for and used by funeral homes, transporting the family of the deceased. Others did duty as glorified airport taxis. 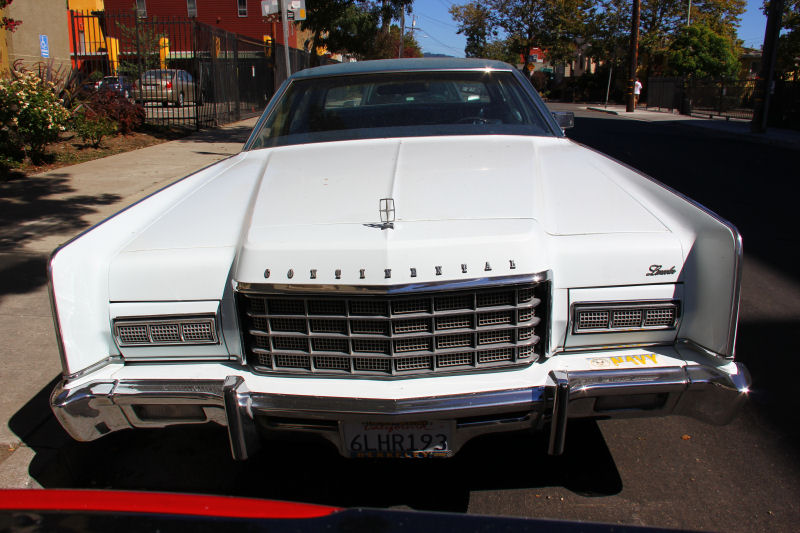 Lincoln is known for its traditional American approach to luxury. Lincolns typically are big, softly sprung cars with thick, overstuffed couch seats and convenience options that appeal to old people. The package may include a padded vinyl top, hood ornament, whitewall tires and full hubcaps. And in the 1970s, it seems Lincoln's running gimmick was hideaway headlamps. Virtually every Lincoln had the vacuum-operated headlight doors, as did many fullsize Ford LTDs and Mercury Marquis. It added a little uniqueness to an otherwise slab-sided car whose only curves were the wheel arches and the little kick up in the beltline at the C-pillar. 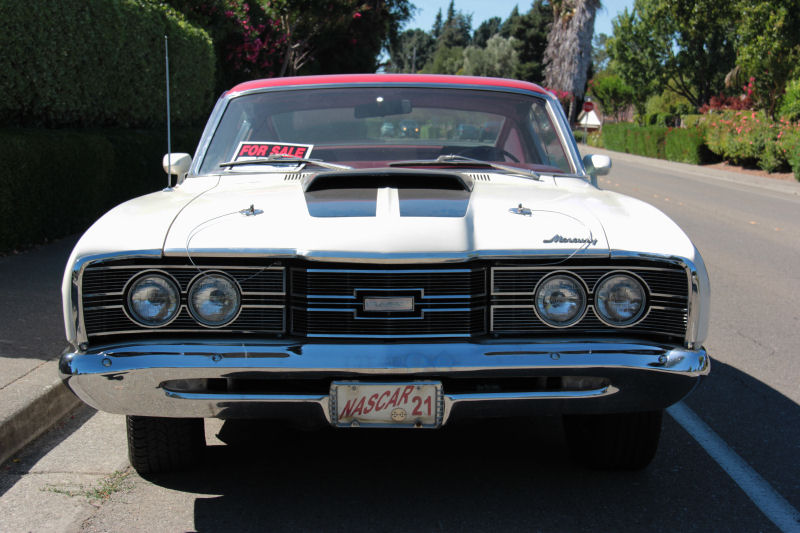 I've never been a huge fan of NASCAR. Actually, when I was a kid I liked it somewhat; Dale Earnhardt Sr. was my favorite driver. Then in 2001 he was killed at Daytona and my interest in the sport died with him. But long before stock car racing was generic bodies with restrictor plates and heavily regulated 358 cubic inch V8s running the same official fuel, NASCAR was a very different landscape. One of my favorite race cars is the ridiculous high-winged 1969 Dodge Charger Daytona, a car that could hit 200 mph on a high-speed oval. It was a very tough car to beat. Combating the Daytona was a pair of fastback twins from Ford, the Torino Talledega and Mercury Cyclone Spoiler. 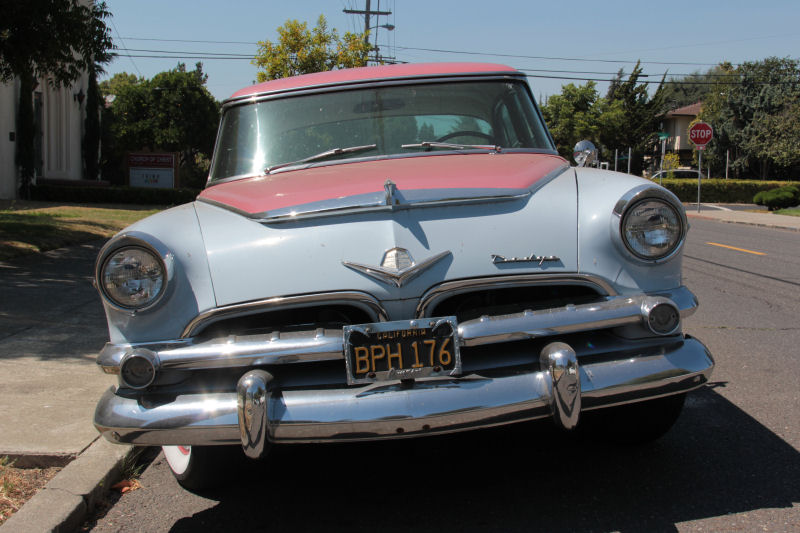 It almost seems like some kind of miracle that Chrysler has survived this long. The auto bailout of 2009 is still fresh in everyone's minds and now Chrysler is primarily owned by Fiat. But that wasn't the first time they nearly went bankrupt. Chrysler Corporation needed a government loan back in 1979 after a decade of mostly terrible, forgettable products. And before that, in 1954 Chrysler needed a $250 million private loan to keep itself afloat. That's roughly $2.1 billion in today's dollars. That loan allowed them to employ the talents of designer Virgil Exner and finally banish the upside-down-bathtub look that had fallen out of favor as the 1950s wore on. 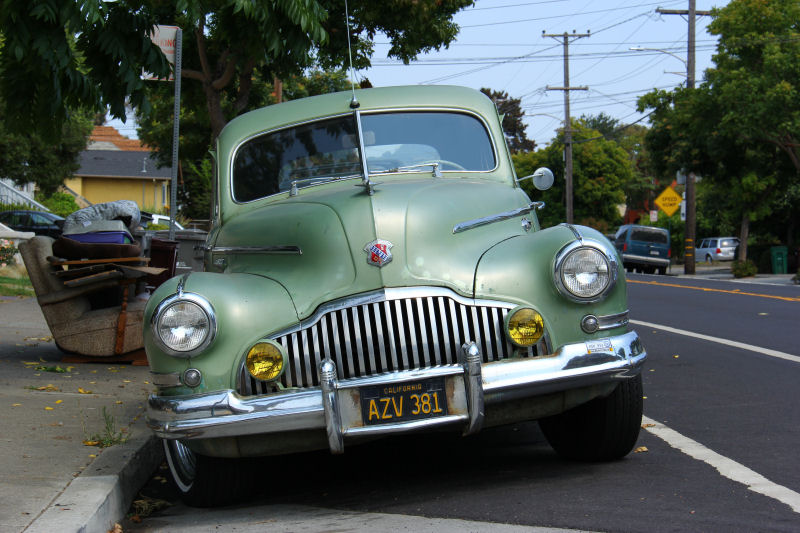 One of the smallest production years in American automotive history was 1942, the final year of civilian car production before American factories switched over fully to building military equipment for the war effort. A few companies managed to secure government contracts to build ambulances, staff cars and transport trucks based on existing models. Others retooled and provided engines for military vehicles and still others built tanks, jeeps, aircraft and countless other mass-produced resources for the U.S. military fighting World War II. Buick produced just 92,573 cars in the short 1942 model year, of which 1,611 were Series 40A Special 4-door Touring Sedans. The Special 6-passenger Touring Sedan was offered in two versions, the 40A and the 40B. The 40A was a short-wheelbase, less flashy version. The 40B was eight inches longer and included more chrome trim on the rear fenders to match the pair of "speedline" strips on the front fenders. The 40B Touring Sedan sold 17,187 copies. 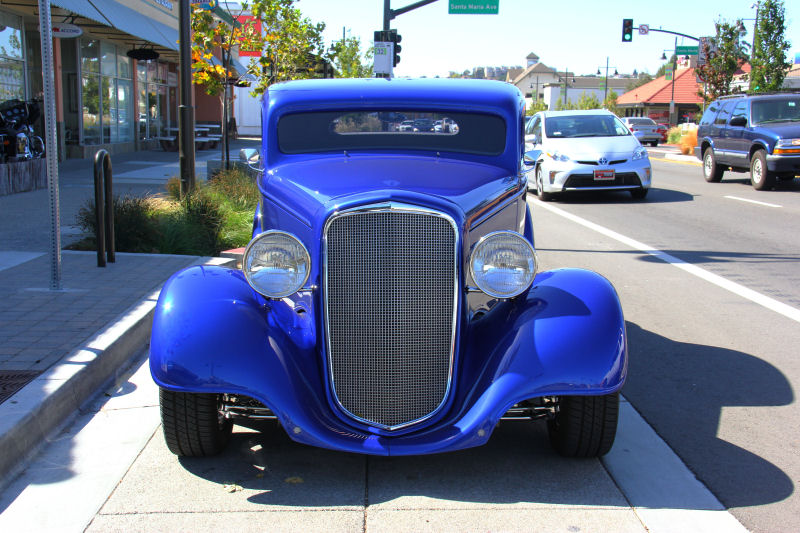 Hot rods are a mixed bag for me. They're built to the taste of the owner, which is fine, but they can go two very different routes to get there. One is to start with an original vehicle, ranging from a rusty junkyard shell to a nice clean car. The other is to build a brand-new replica from fiberglass or steel in the style of the car you want. The increasing availability of fiberglass bodies for custom cars over the past few decades calls into question the provenance of many of the rods and customs one sees at shows nowadays. Several of the most common replicas include '32 Fords, '33-34 Fords, Shelby Cobras, 1941 Willys Americars and, to a lesser extent, the Beetle/Chevette/Pinto-based 1929 Mercedes SSK ("Gazelle"), Beetle-based Porsche 356 Speedster, and any number of Italian exotics mimicked poorly on the long-suffering Pontiac Fiero chassis. One of the cars I didn't previously know is available as a fiberglass replica, though, is the 1934-1935 Chevrolet 3-window coupe.

I think it's safe to say this is officially the oldest car I've seen used as a daily driver. There's a man in Alameda who loves his Model Ts, and I just happened to cross paths with him one evening while cruising for cars. Specifically, I was parked and on the phone when the aged black Tin Lizzie puttered by. I decided to follow it until it parked, which it did minutes later. The Model T is such a ubiquitous vehicle, I always wanted to find one and feature it here. However, despite 15 million of them rolling off the production line over 19 years, they're pretty hard to come by on public roads. Alameda, with its 25-mph speed limits, is one of the few places where a Model T can keep up with modern traffic. 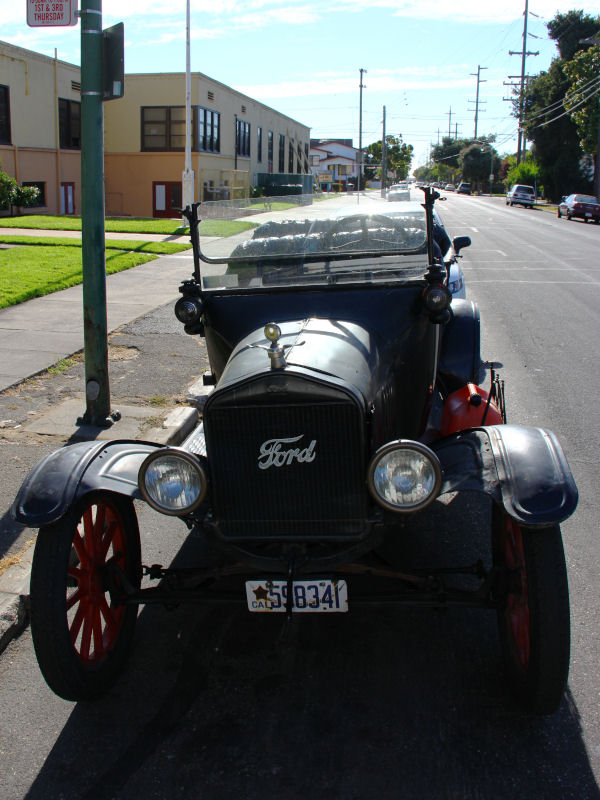