UT Models is a brand that I know mainly as a defunct maker of models that sell for really big money on eBay. The company produced 1:18 scale models mostly in the 1990s and has an interesting history. While UT went out of business around 2000, parts of the company survived through Gateway Global, and were absorbed into the now-established Auto Art premium brand.
Pretty much all UT diecasts are rare now, but the 1999 release of the 1996 Chevrolet Impala SS in Dark Gray Green is one of the more difficult ones to find. The GM B-body models are sought-after by police car aficionados who kit them out with LED flashing lights. I adored the '96 Impala SS in general, but my favorite color was the metallic gray-green. When I learned about the UT model's existence, I decided I wanted one. But prices were too high! As I type this, there is a green UT Impala SS on eBay, mint in box, for $129.94. Three years ago I was surfing eBay and found a green Impala listed with a starting bid of $9.99. The car was loose with no box, a bit dusty and needed the side mirrors touched up where the black paint had rubbed off. The car had been sitting in someone's closet for years. I jumped on it. It was used, sure, but where else are you going to get a UT Impala for $11? 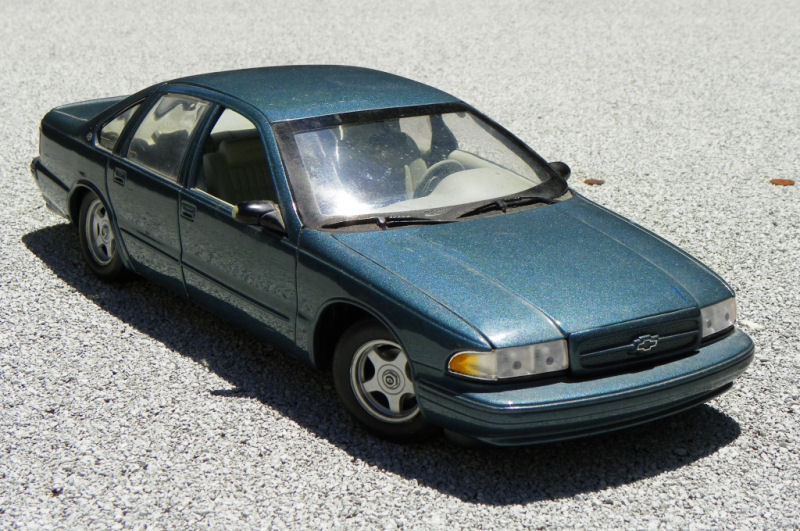 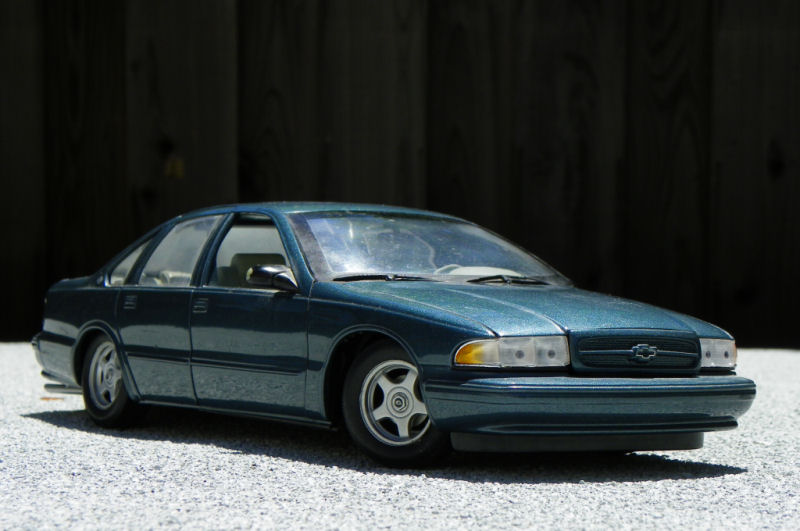 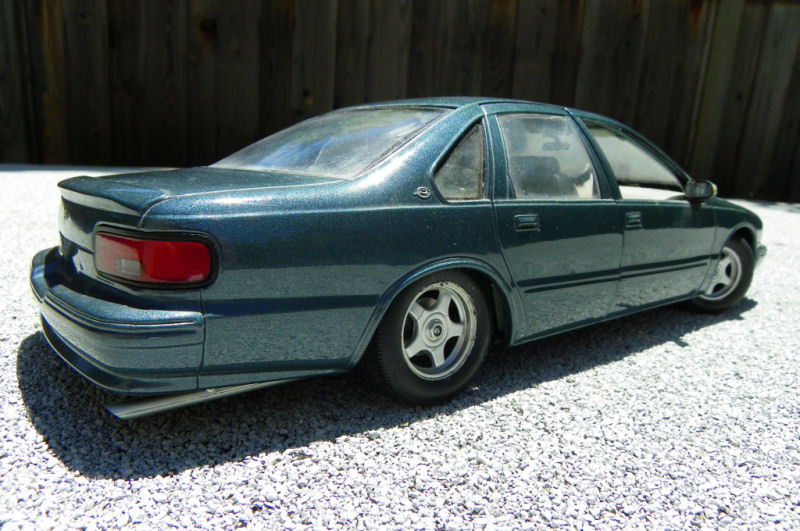 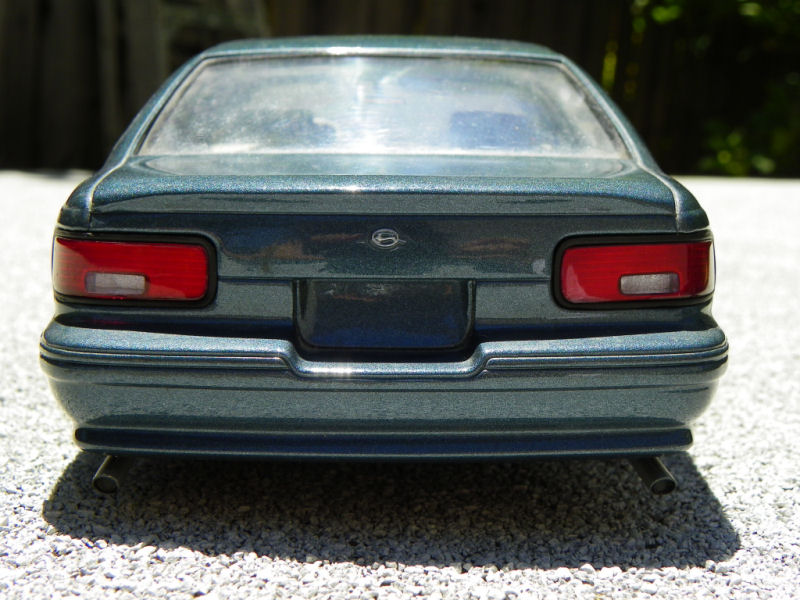 If only that was all there was to it. The car arrived in the mail and I excitedly opened the box. As I pulled the car out I saw there was nothing cushioning in the bottom. Someone had set the model in a cardboard box, surrounded it with newspaper only around the sides and top, and handed it off to the postal service who had no knowledge of what was inside to take care of it. And boy did they. Two of the wheels were broken. The rear axle was cracked. One of the side mirrors was broken off (that was an easy fix, at least). The exhaust pipes which had already been hot-glued back in place were hanging loose under the car. I was horrified. The seller offered a second model of a UT Caprice squad car if it would smooth things over, but I wanted the Impala as a civilian Impala, not an unmarked police car to be cut up and stuffed with lights. The Caprice would have had no usable parts to repair my Impala. To date, the car remains broken until I figure out what to do with it. At least it photographs well on one side. 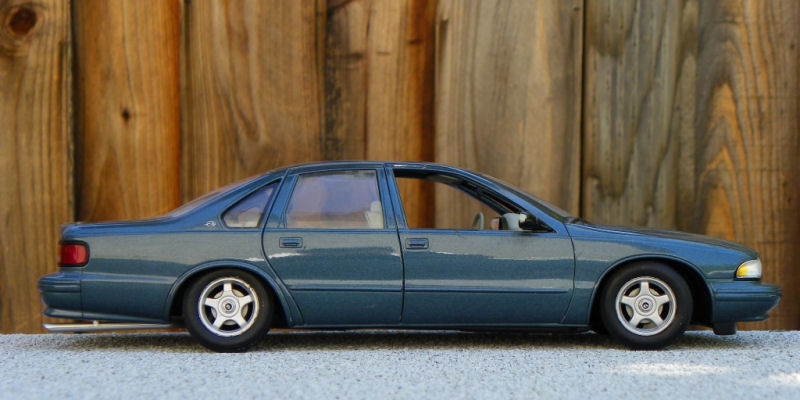 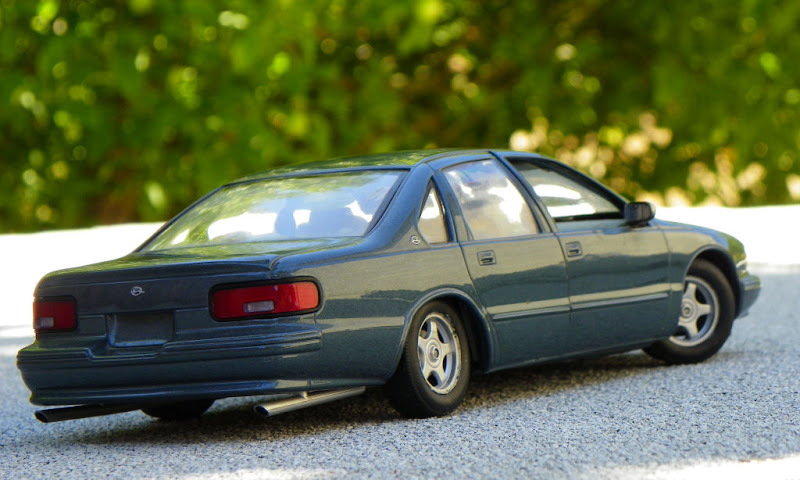 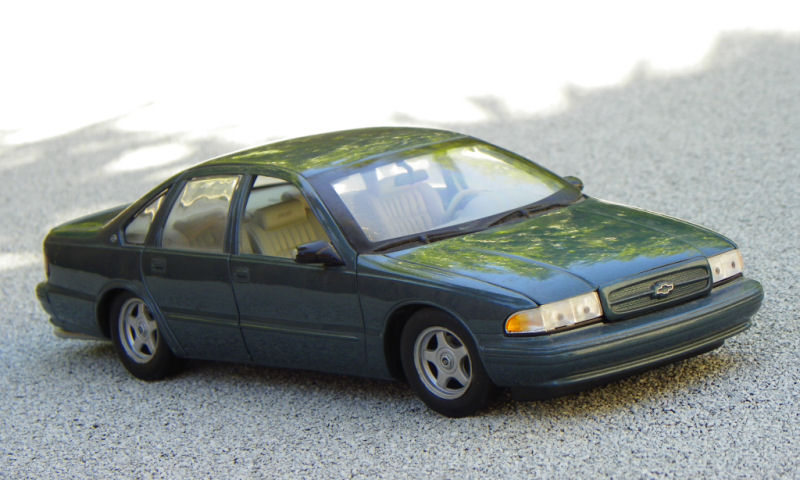 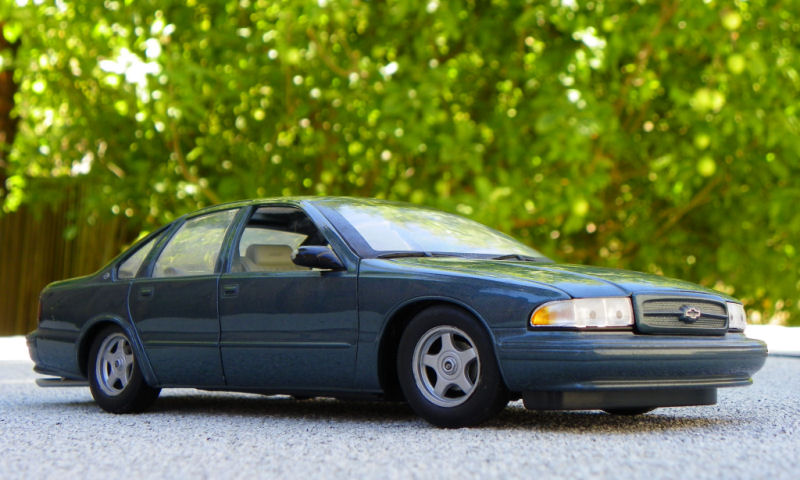 As detail goes, this model is decent. The real 1996 Impala doesn't have a whole lot of stuff going on, so the model doesn't have to be flashy. By modern Auto Art standards it's a bit primitive, but this was made back when 1:18 scale models were regarded more as toys for older children than proper adult collectibles. The body is in great condition, with relatively little wear aside from the scuffing on the mirror caps. I've been afraid to detail the top and hood of the car which are a bit dirty; having little experience with UT diecasts I'm not sure how strong the paint is to hold up under polishing. The Impala C-pillar badges are neatly picked out in silver paint, as is the Chevy bow tie on the front grille. The Impala SS script is actually faintly visible on the quarter panels, a feature I never previously noticed even while photographing the model. On the real cars this was an embossed decal applied to the body. The taillights are very realistic-looking, though the headlights have very visible mounting pegs that make the car faintly resemble some four-eyed lazy fish staring at you. On close inspection the shipping damage to the wheels can be more easily seen. And that's the car's good side. I normally keep it suspended off its wheels to protect them from breaking completely. The trunk lid and two rear doors do not open. 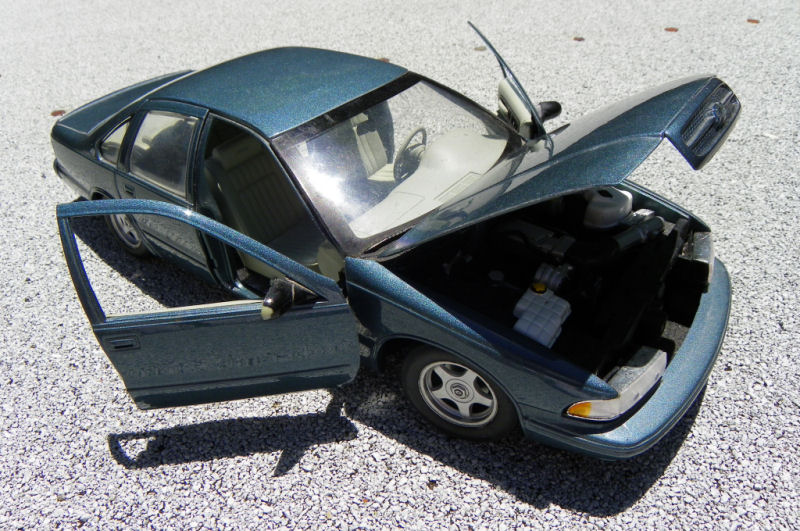 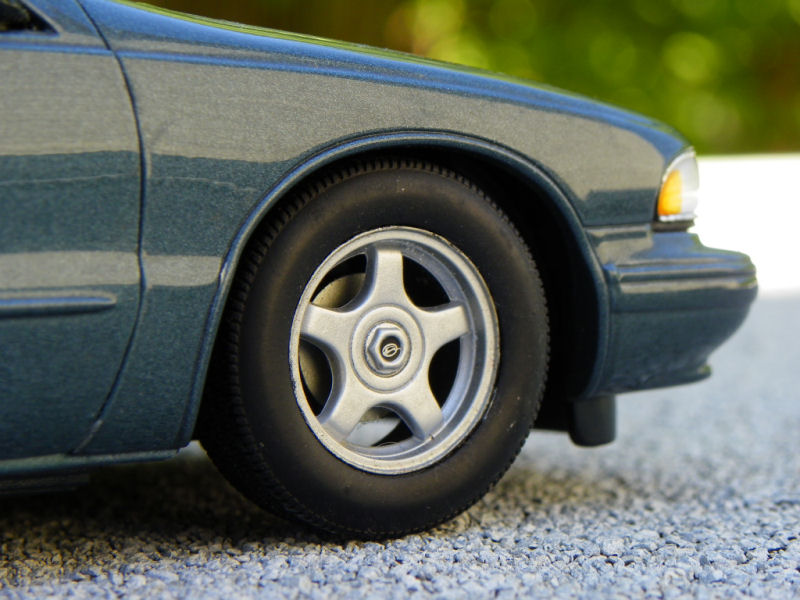 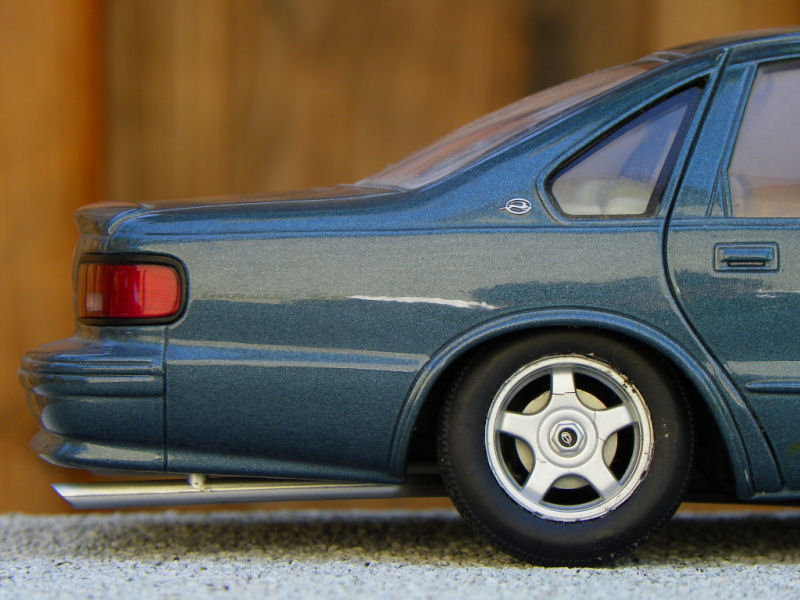 Under the hood there's a fair amount of detail, painted for realism but suffering from prominent mold lines especially on the air intake. The interior is handled nicely, with seatbelts, seats embossed with the SS logo and a well-detailed dash with individually labeled HVAC controls. My biggest gripe with the interior (aside from it being very difficult to clean due to the sealed rear doors) is that the steering column is narrow and unsubstantial. Otherwise, good effort. 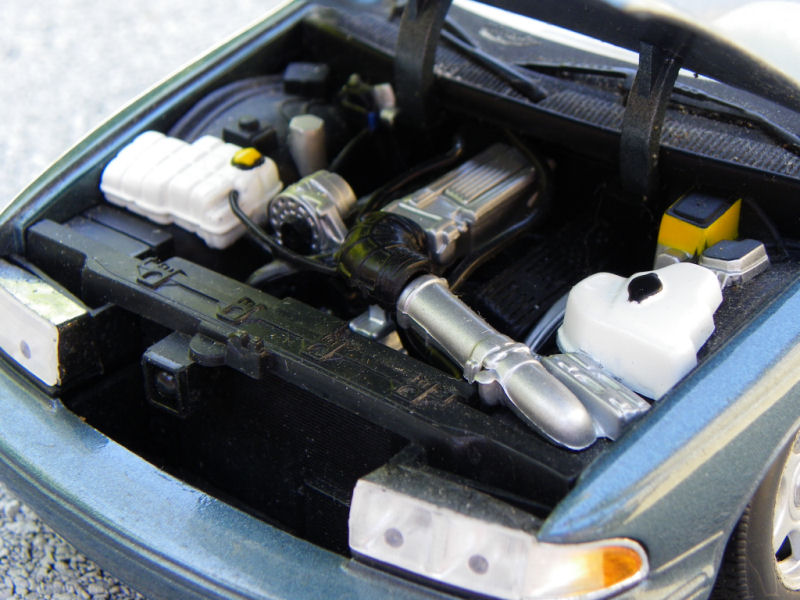 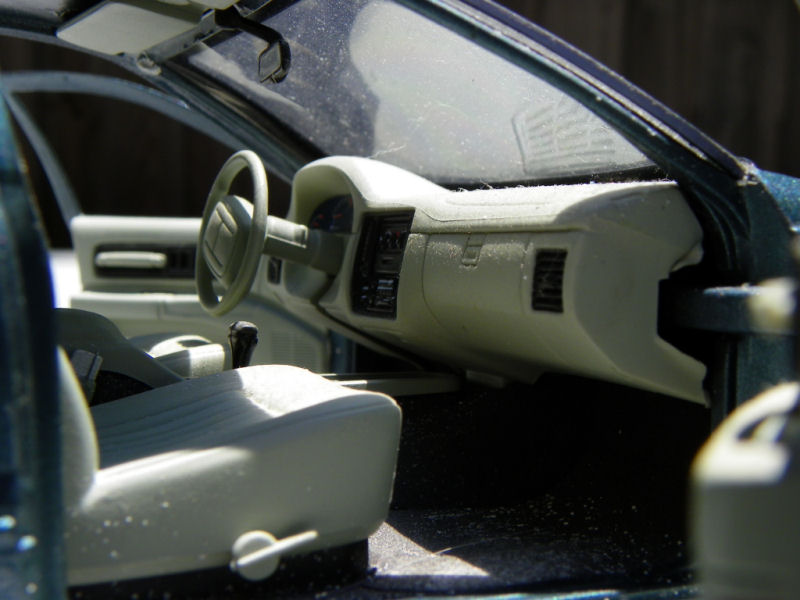 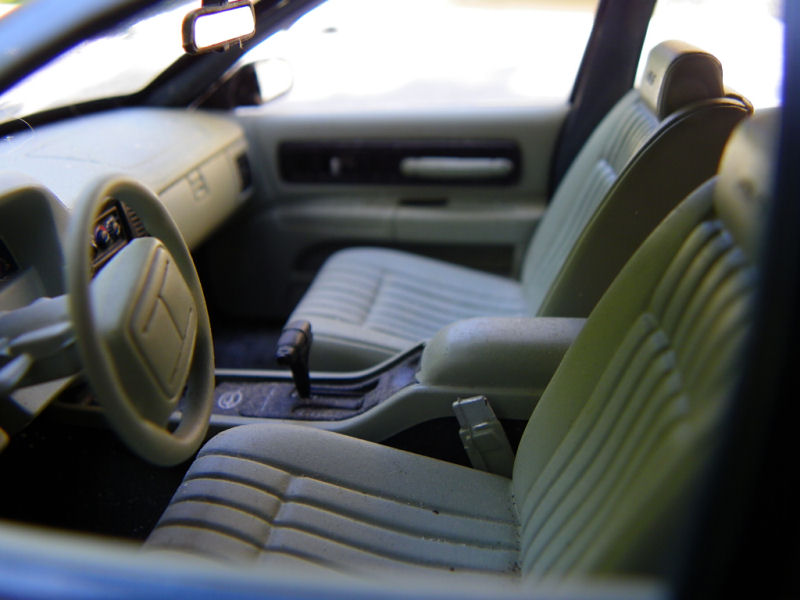 Of all the models to get broken in shipping, this one really made me upset. I still love it, though, and hope that maybe someday I can fix it properly.
Posted by Jay Wollenweber at 12:00 AM