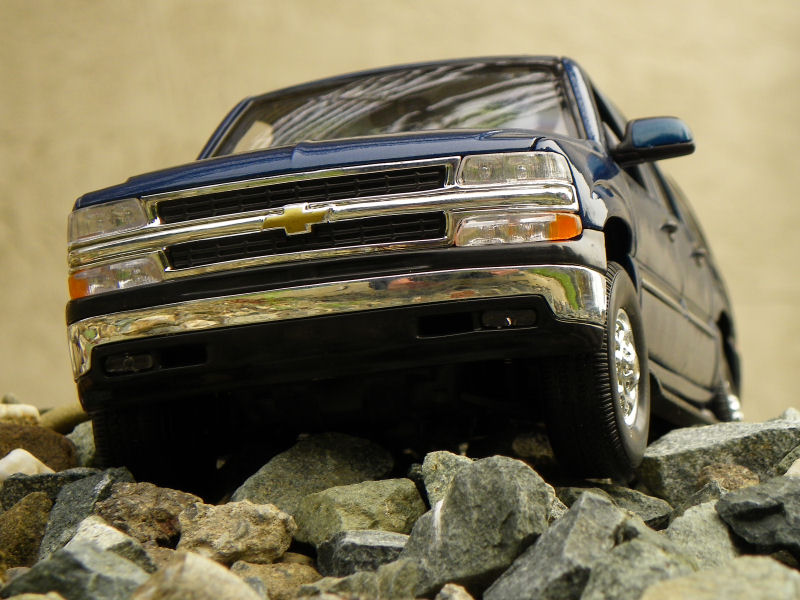 Some years ago I ran across a diecast website called Uncle Chester's Toy Trucks. They offered a black 1:18 scale Chevy Suburban, allegedly from ERTL with four opening doors. Now, ERTL did make a Suburban 2500 4x4 with four opening doors. The 4x4 was offered primarily in promotional series for Matco Tools, Outdoor Sportsman and Thomas Kinkade, and a metallic grey one with auxiliary lights and bullbars. They also made a lowrider version in their Fast and the Furious series. When ERTL was done with the casting, they sold or licensed the tooling to Welly, a brand known for producing good-quality budget diecasts often with old tooling from other companies. I never did get Uncle Chester's Suburban, as the mythical black truck sold out quickly. However, I did manage to pick up this blue Welly Suburban on the old GoMotorBids.com for $8 plus shipping. 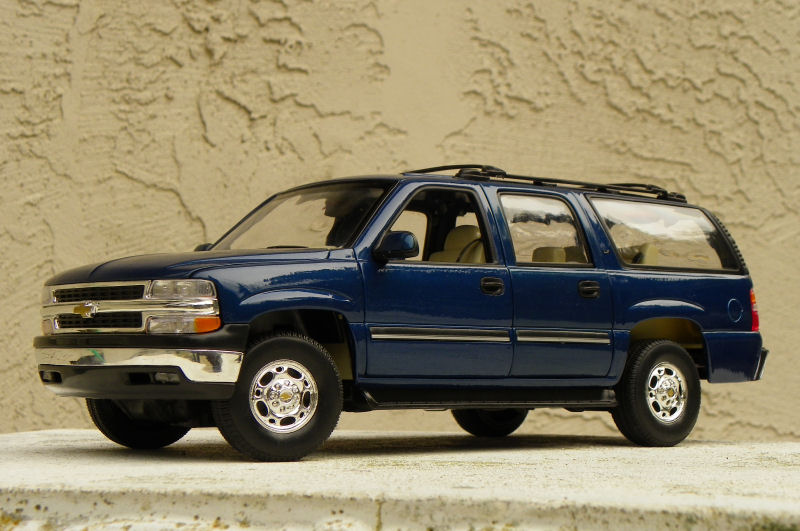 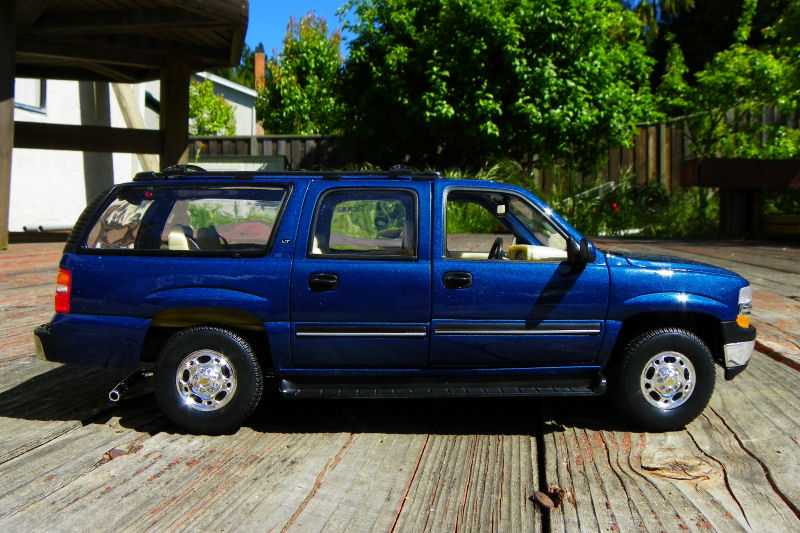 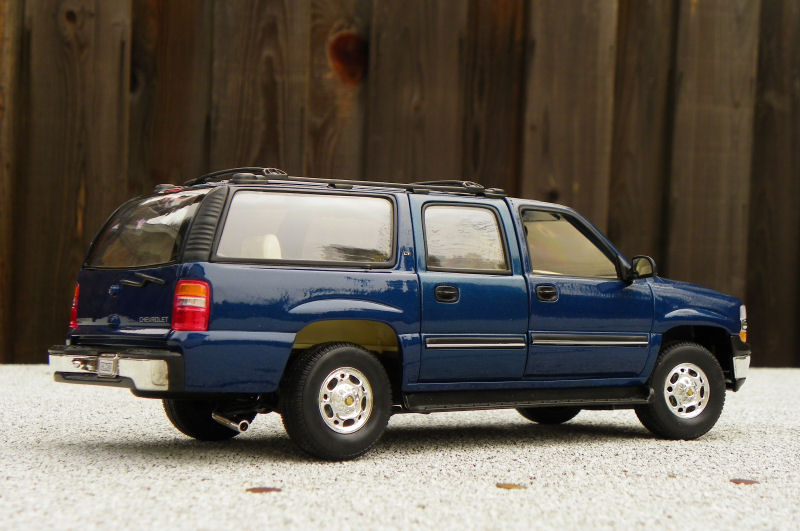 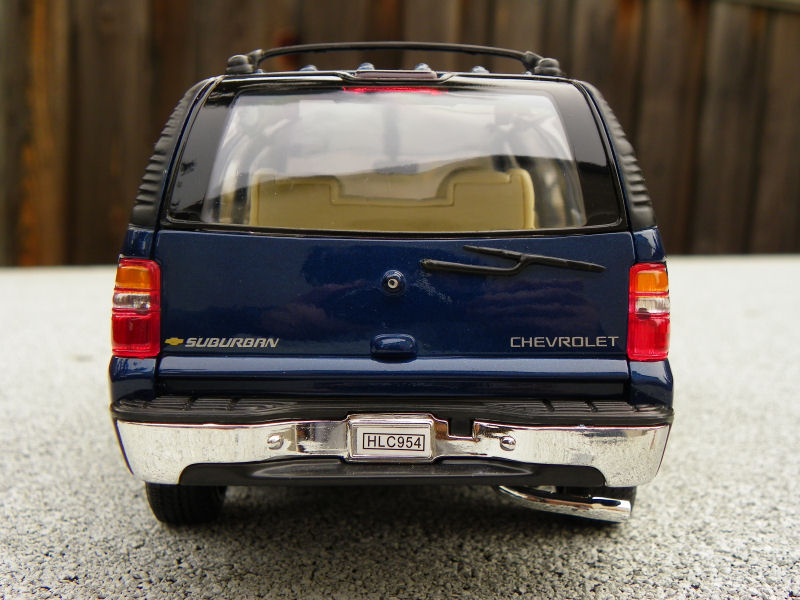 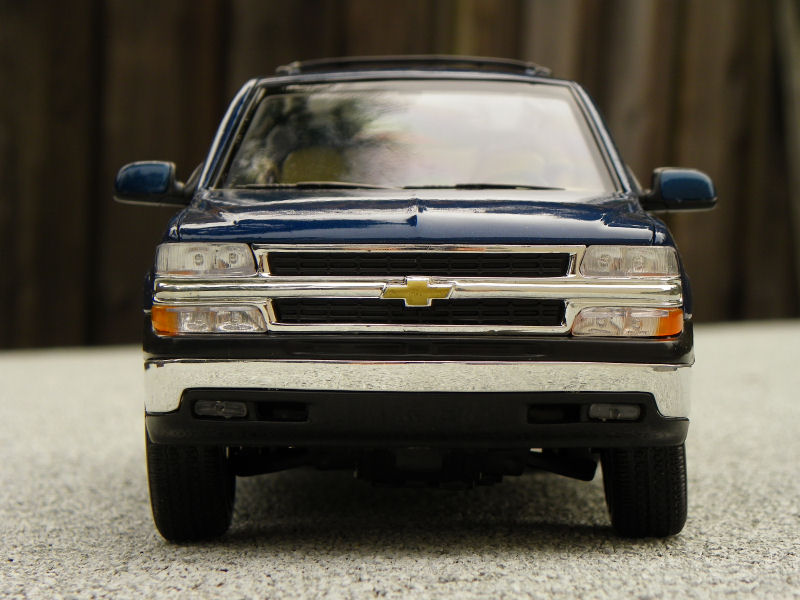 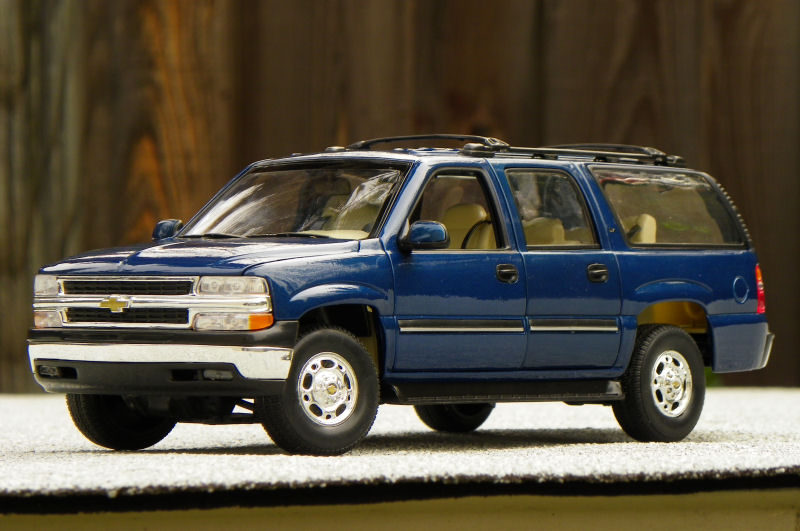 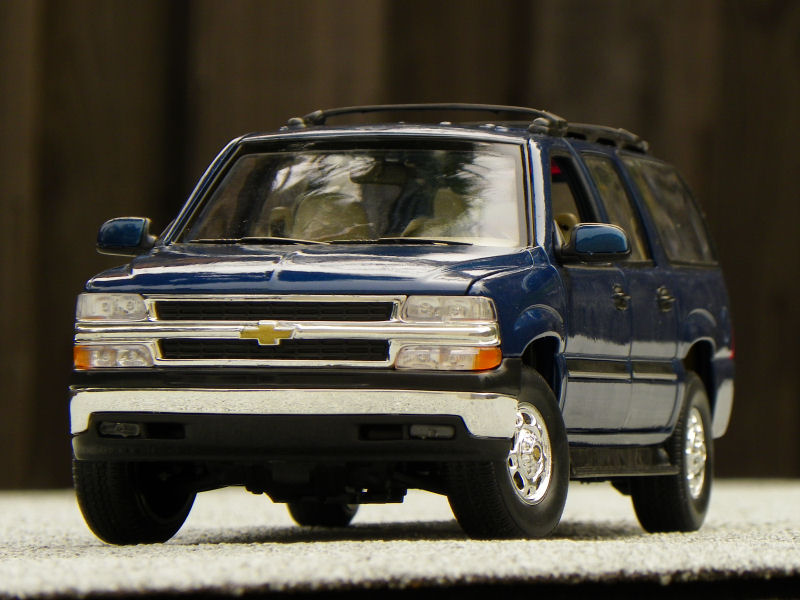 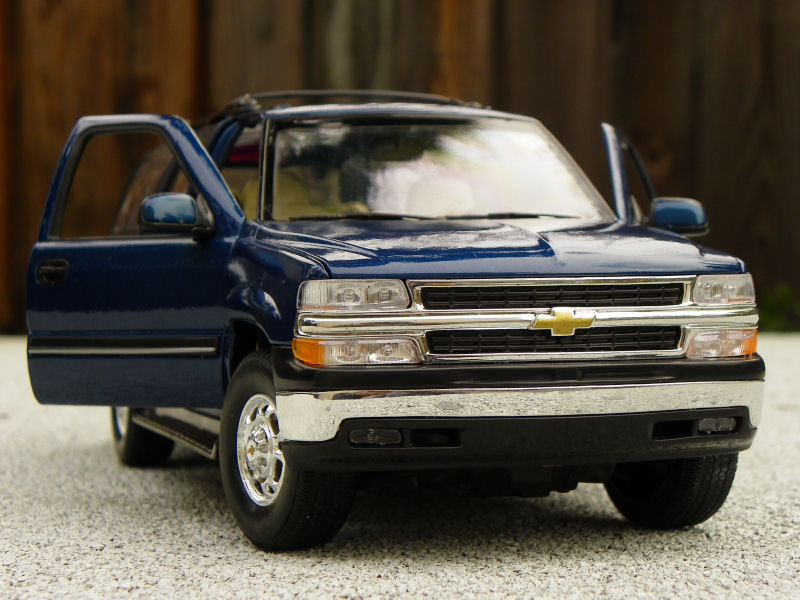 Welly apparently made the ERTL Suburban into a regular two-wheel-drive LT model, and saved production costs by removing the hinges for the back passenger doors. So the rear doors are separate pieces like always, but they no longer open. The hood, front doors and rear hatch open, revealing a 5.3 liter Vortec V8 engine and three rows of seating. Interior detailing is a bit sparse, but 2001 GM interiors aren't much to look at in the first place. As is typical with cheaper models, the truck has no interior headliner, though it does have seatbelts for all passengers. Engine detailing is sufficient for a model at this price point. The body is acceptable, a good size and heft though the rear end is a little blocky at the bottom, and the right-side front door doesn't quite line up when closed. 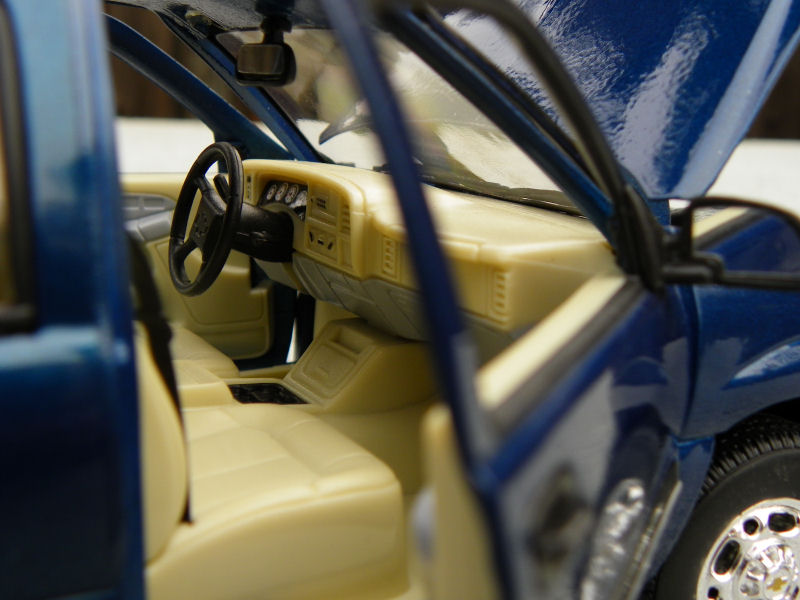 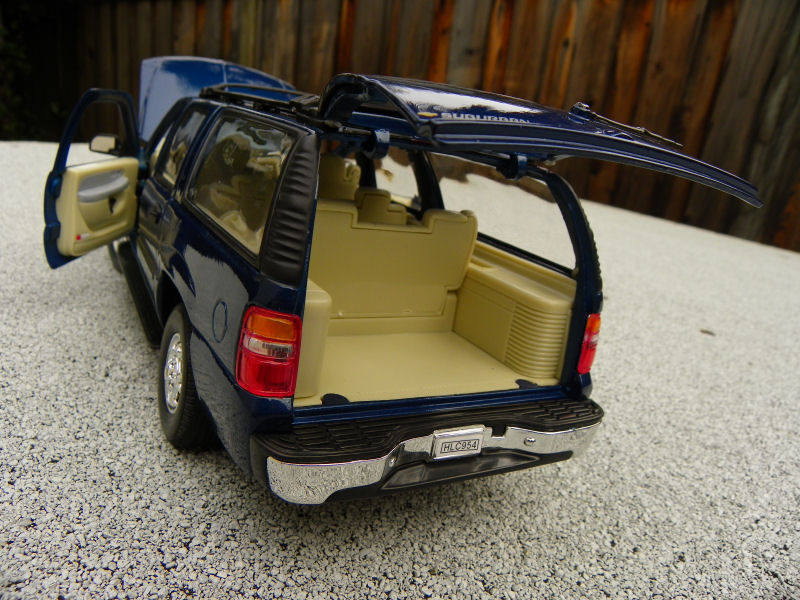 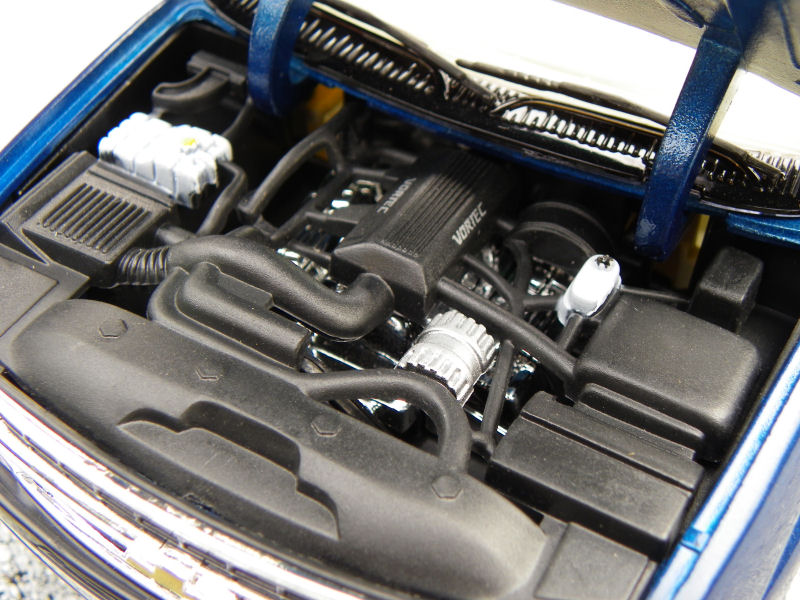 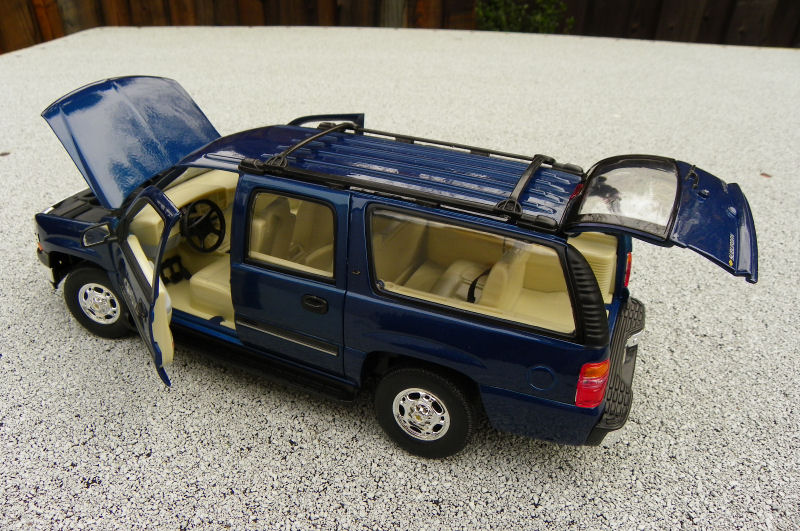 This Suburban is a good budget diecast for an truck or SUV enthusiast, and Welly also produced a Silverado extended-cab pickup and a GMC Yukon Denali. These Suburbans, predictably, are popular with customizers who make them into police and federal vehicles. For this reason, the black and white ones in particular are getting expensive and hard to find. I'm glad I got mine when I did.
Posted by Jay Wollenweber at 12:00 AM