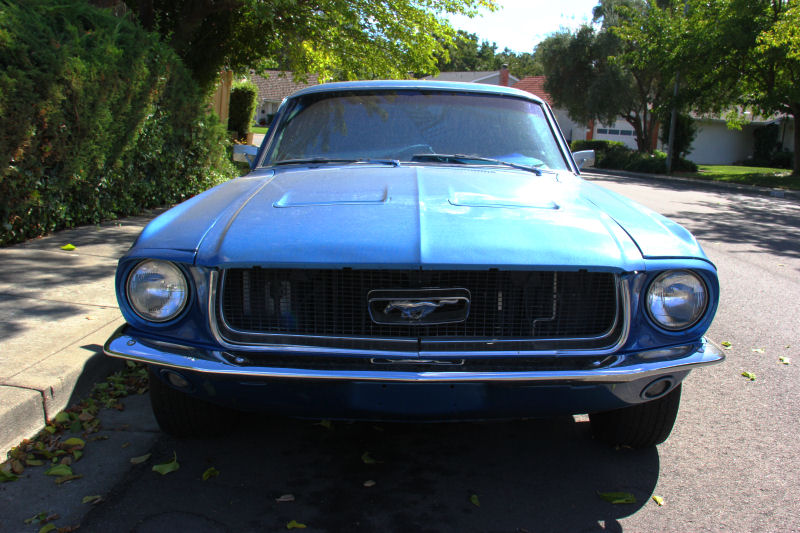 I must admit I'm disappointed. When I was driving through the neighborhood and rolled up on a pretty blue Mustang California Special I grabbed my camera immediately. A GT-CS is pretty, well, special. They were produced originally for one year, 1968, and were the closest thing to a notchback Shelby that a customer could buy. The GT-CS was based heavily on a 1967 Shelby design study called "Little Red", and received many of the same Shelby fiberglass pieces for the side scoops, taillight panel with '65 Thunderbird taillights, trunk lid and ducktail spoiler. Up front, the Mustang running horse "corral" was removed and two rectangular foglamps occupied the otherwise empty black grille opening. Unique "California Special" script badges and side stripes were also created and stuck on the cars. Only 4,118 were built including 251 cars marketed as "High Country Specials" for the Denver, Colorado area. 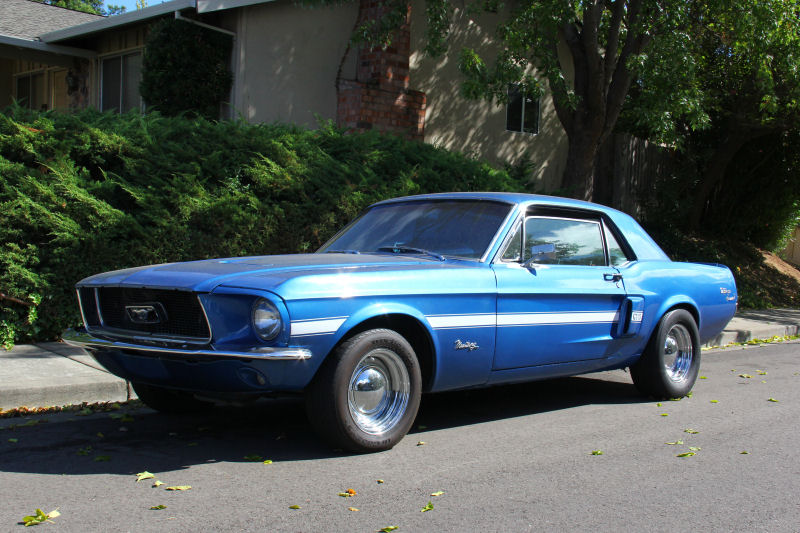 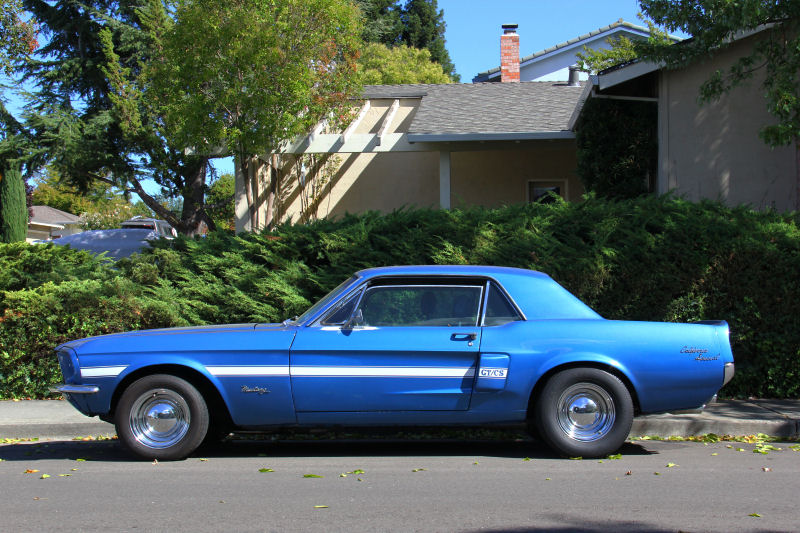 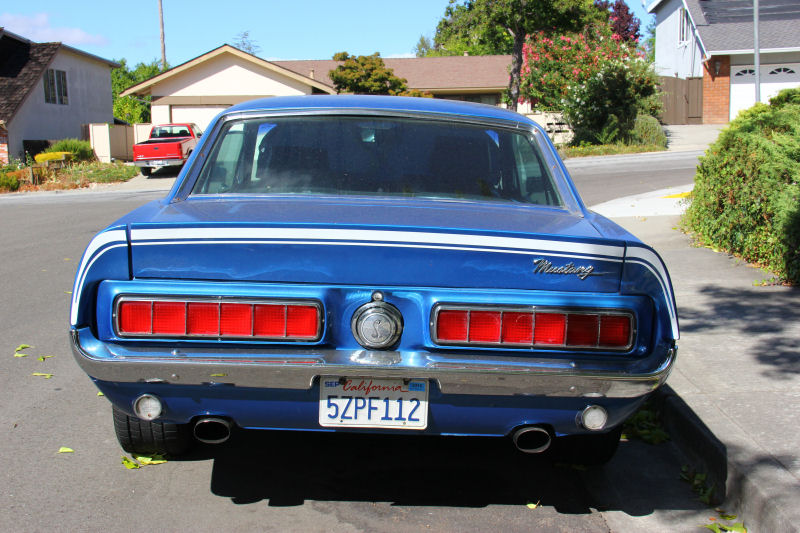 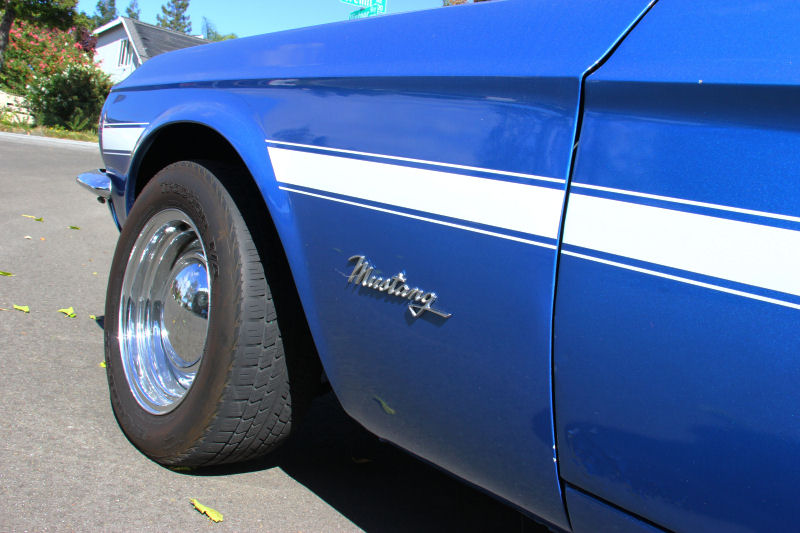 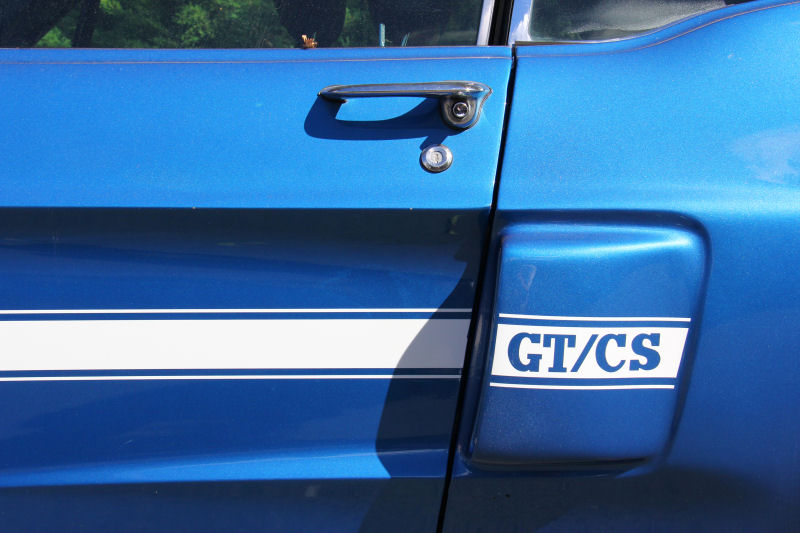 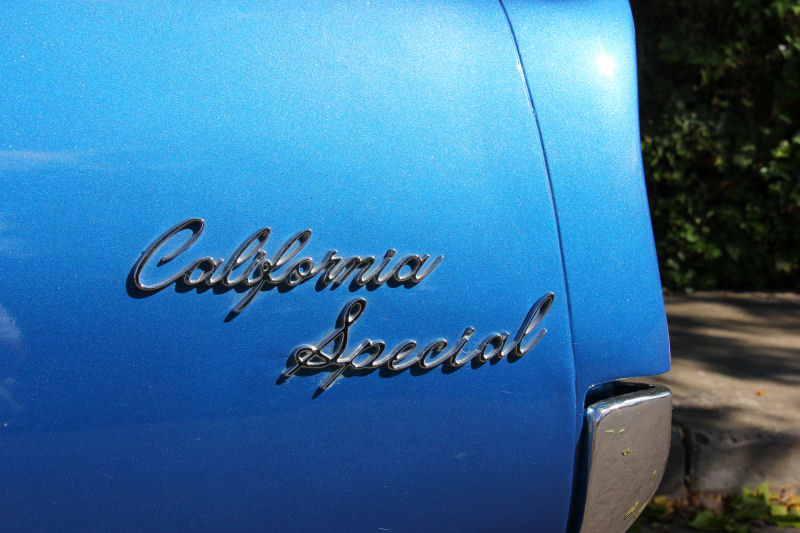 So you can imagine my excitement when I saw this one. But on close inspection it looks fishy. The color combination is right, as the GT-CS was available in metallic medium blue with white side stripes, but the stripe stickers are slightly crooked around the rear spoiler. Could be an amateur restoration, perhaps? It happens. But the front grille is standard Mustang with the corral and no foglights, and worse yet, I think the corral is actually a piece off of a 1966 Mustang. There are no side marker lights, which normally would make this car a '67, but most other identifying features between a '67 and '68 are not visible in these pictures. Also, some owners prefer a cleaner look to their cars and remove the side markers. So I could let that slide. The GT-CS fiberglass pieces look correct, though such components are available in reproduction for building Shelby replicas. The body also wears Mustang badges on the fenders and trunk that are correct for a '68. The final big hint for a '68 Mustang versus a '67, assuming the interior is all stock, is a two-spoke padded steering wheel. But this one has a 3-spoke wood-rim wheel like a Shelby - a 1967 Shelby. A smaller hint, one which required some Googling to confirm, is that the '67 and '68 Mustang grilles vary slightly. Most '67s have a horizontal bar on either side of the corral, which mount to a pair of holes located slightly above the middle of the grille. A '68 doesn't have two holes; instead it has four holes made to hold a decorative chrome surround that encircles the inside of the grille. This one is a '67. Yeah, I'm no doubt reading way too far into this, but I like to be thorough and accurate when ID'ing a car.

So it's not a '68 GT California Special, which is too bad. But it is someone's toy and no doubt good enough to turn heads and fool a casual onlooker. Like me. For a while.
Posted by Jay Wollenweber at 12:00 AM